Join Pinkbike  Login
Here we go. More than 300 hundred riders took to the hills above Golfo di Diano Marina today to compete in the first Superenduro PRO race of 2012. Among those riders there were Brits, Germans, French, Slovenians, Swiss, you name it. Nearly every European country was represented (except the Spanish, who seem to be the last country in Europe without a major enduro series). Riders faced a course of about 45km (it varied depending on who you spoke to as you can't trust mountain bikers to tell you how far they've really ridden) with some long climbs, but plenty of descending to reward them for it. 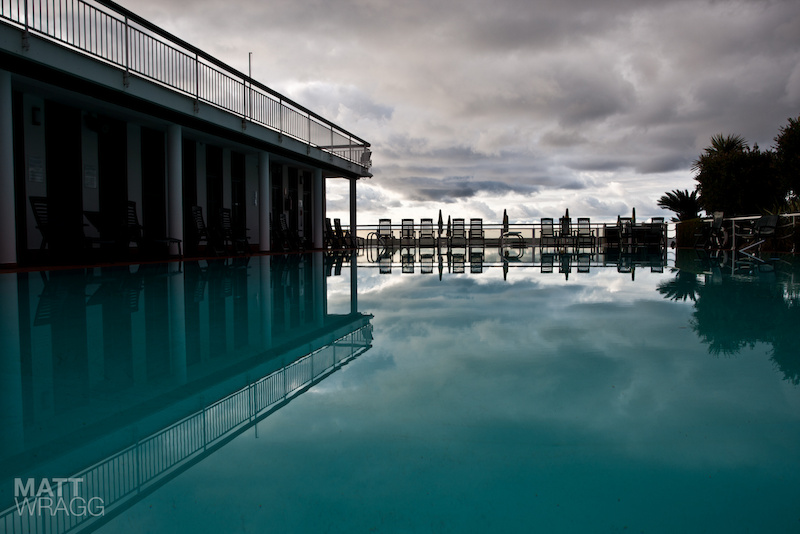 Same swimming pool, different day. Yesterday the rain was falling on the water, this morning there was no rain and the clouds had dropped down a gear from ominous to indecisive. 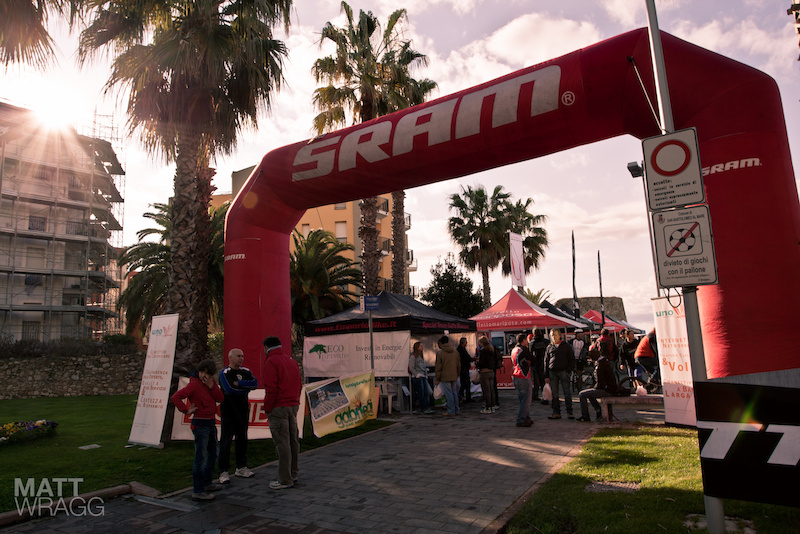 By the time the paddocks started to come to life the sun had even made its way out. This is the Piazza di Torre Saracena that we featured a photo in Friday's piece before the weekend. This is what it looked like this morning. 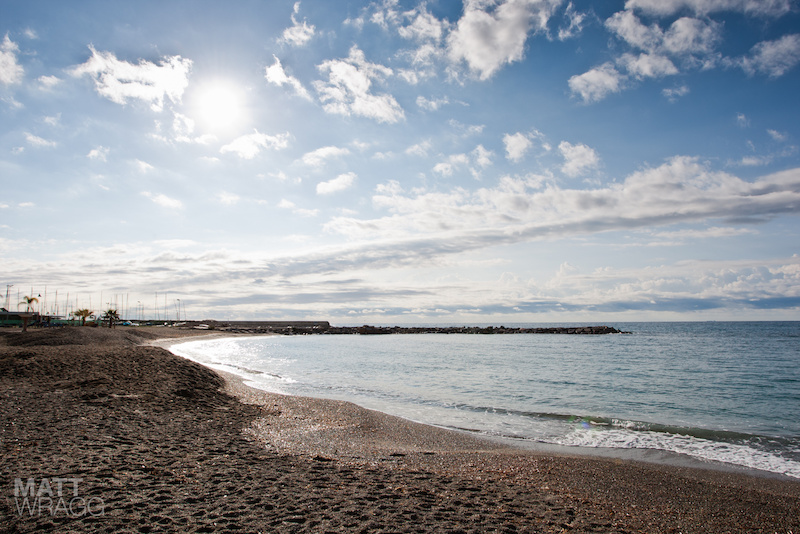 A second photo, just to make sure that really was the sun... 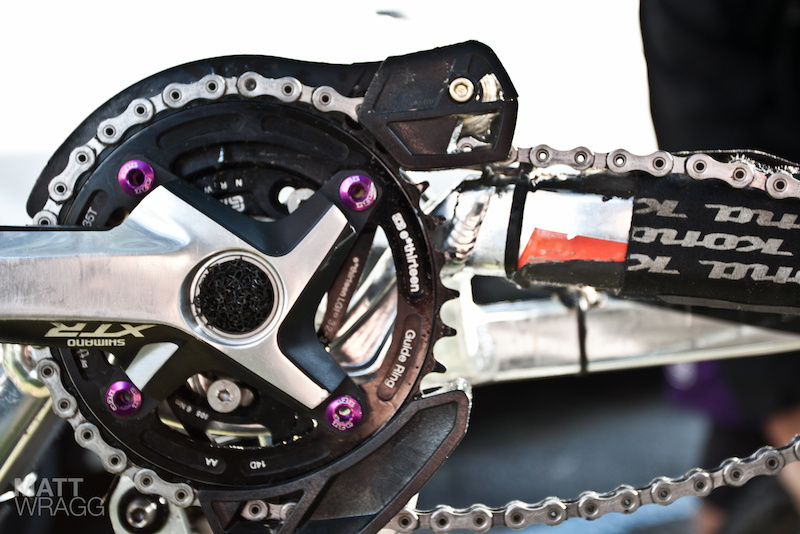 Karim Amour was taking no chances with his bike prep, tucking this crafty bit of moto foam into his cranks to keep the crap out. He had more in the headtube and a funky-looking carbon disc brake cover too. 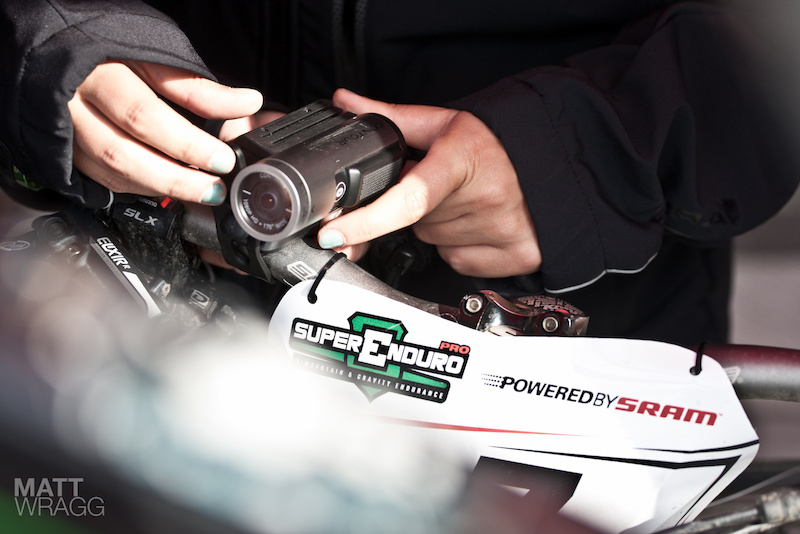 Getting Al Stock mounted up with the Contour for his race. We should have the footage from this later in the week when we've had chance to calm down after a weekend of running non-stop. 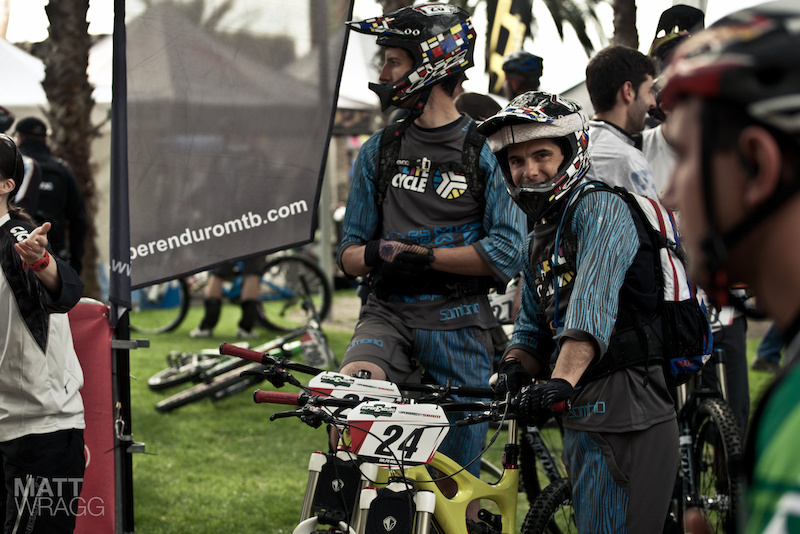 Joseph Murachelli had recovered from the agony of last nights prologue sprint and was in good spirits this morning. They last until stage two when he went down pretty hard on a section that was still wet and slick. 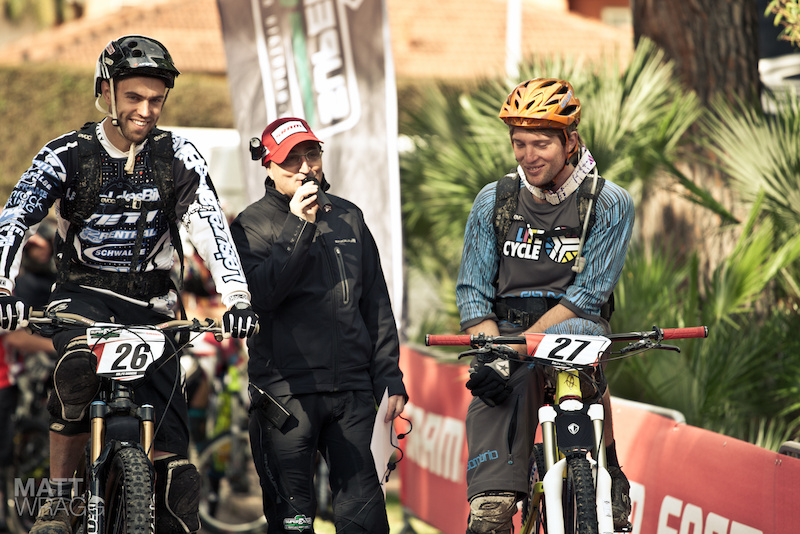 Brits abroad: James McKnight and Paul Aston. Paul probably provided the shock of the weekend coming home in fourth overall against a strong field in his first Superenduro race. 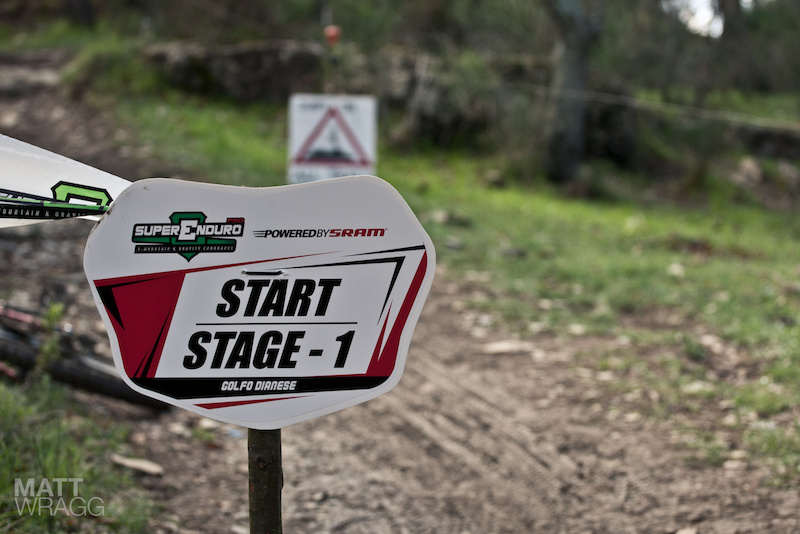 There's an old saying in BMX, "when the gate drops the bullshit stops." Well there's no gate in enduro, but there was a very nice sign marking the start of the first stage, the point where racing for 2012 began. 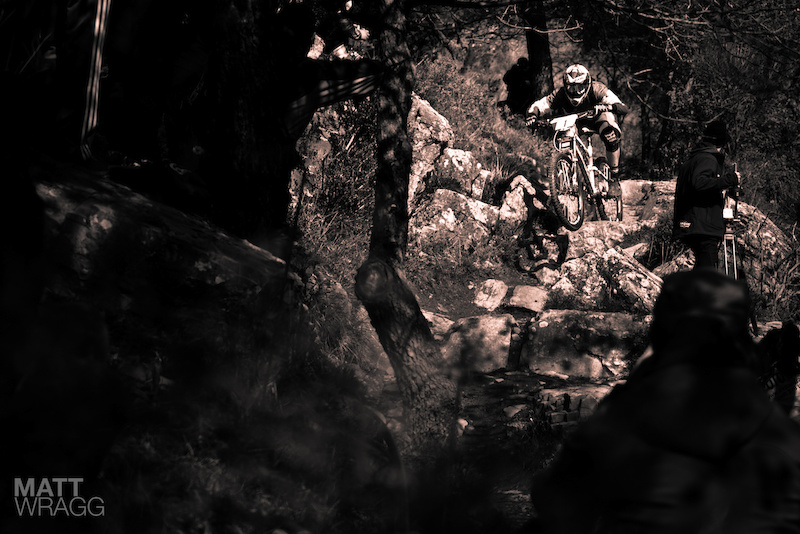 Andrea Bruno was first past that sign and is a great rider to take photos of. He's a bigger fella than a lot of the other fast guys and his aggressive style on the bike makes grabbing photos of him easy. Unfortunately that aggression could only net him a third today behind Davide Sottocornola and Alex Lupato. 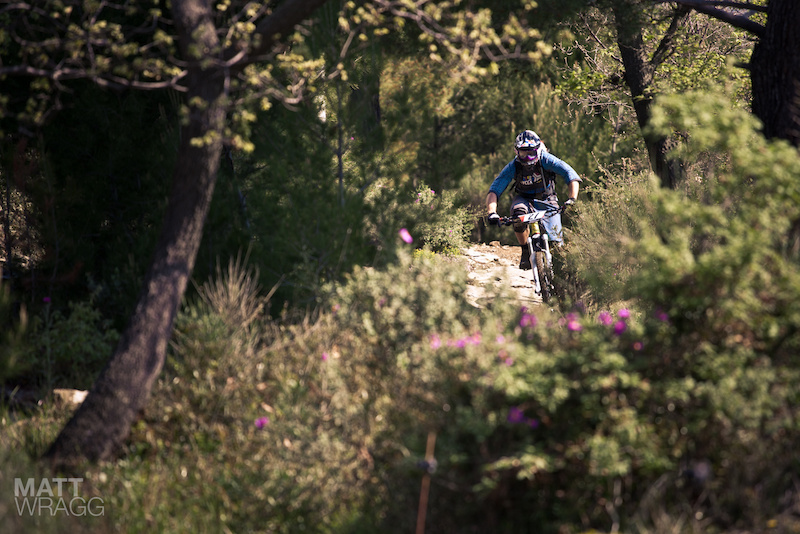 James McKnight managed a solid top-20 finish today, not bad for a guy who was joking this morning that he'd be vomiting into his helmet at some point. 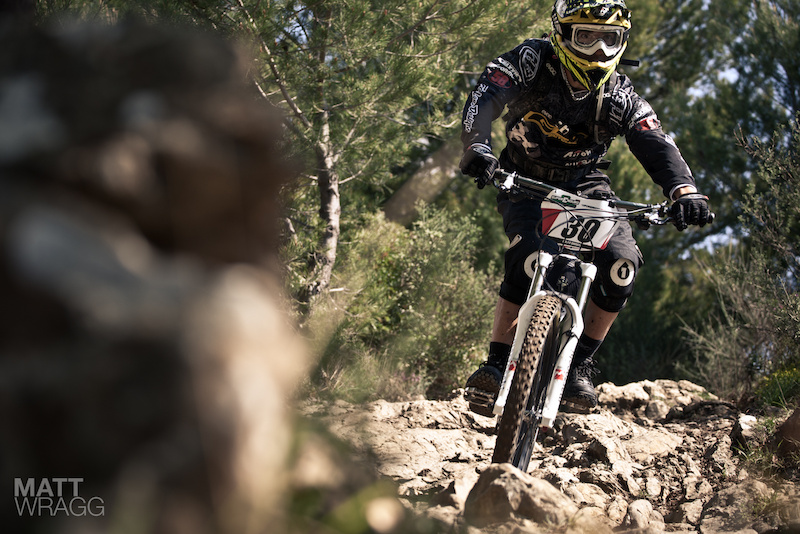 Walter Belli with this gameface on. 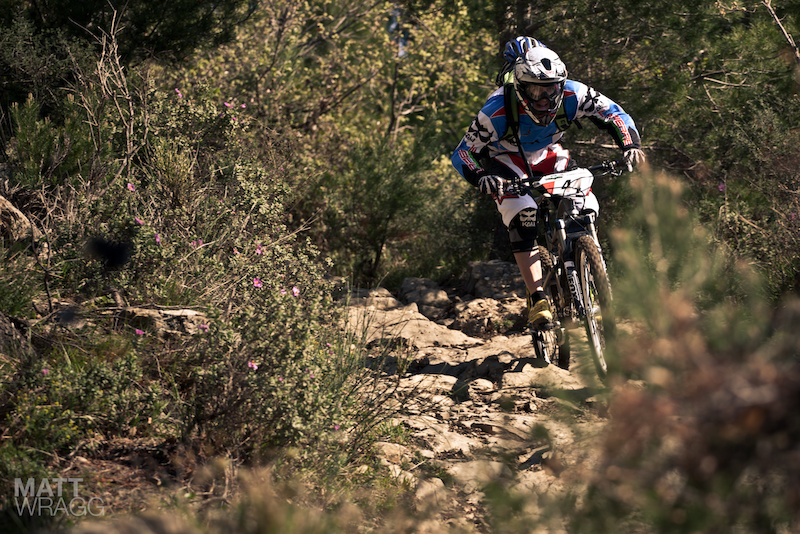 Thomas Decugis on his was to twelth. 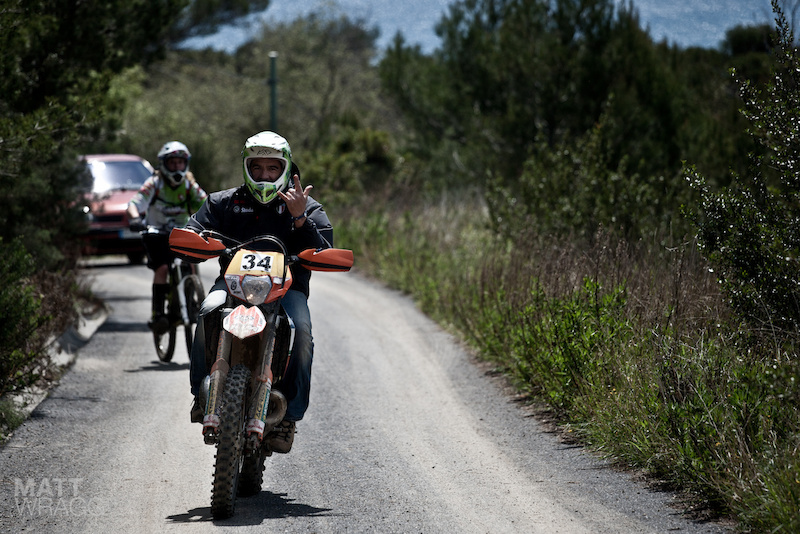 From a distance this looked like some youth messing around, it's only when he pulled it up I realised it was Claudio, head guy for the local organisers, FRRD, and owner of local bike shop Emporio Bike. 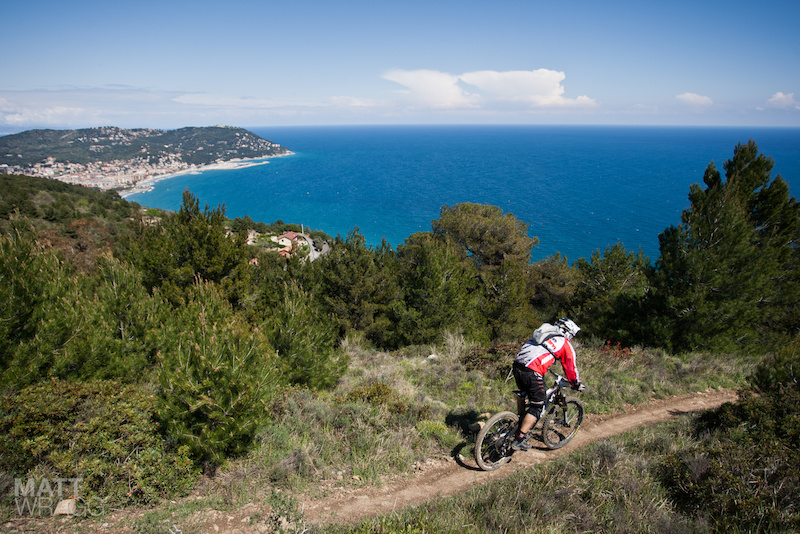 Yep, the sun is still there... 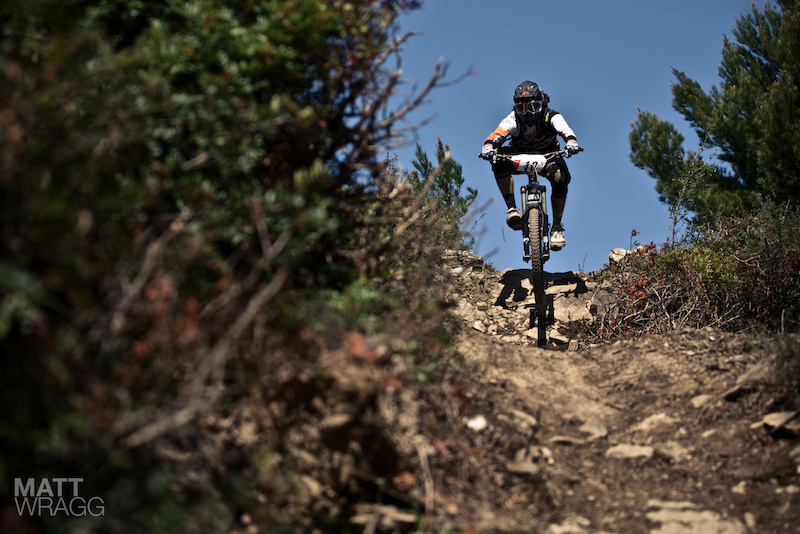 Davide Niccolai getting his huck on for the final stage. 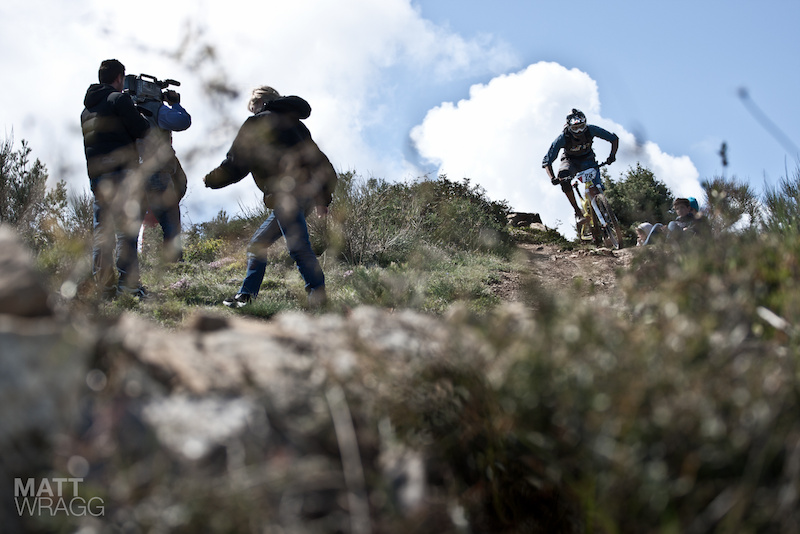 Ale Seddaiu opting for the faster, wheels-on-the-ground option at the famous Salto Nel Blu (Jump Into the Blue). 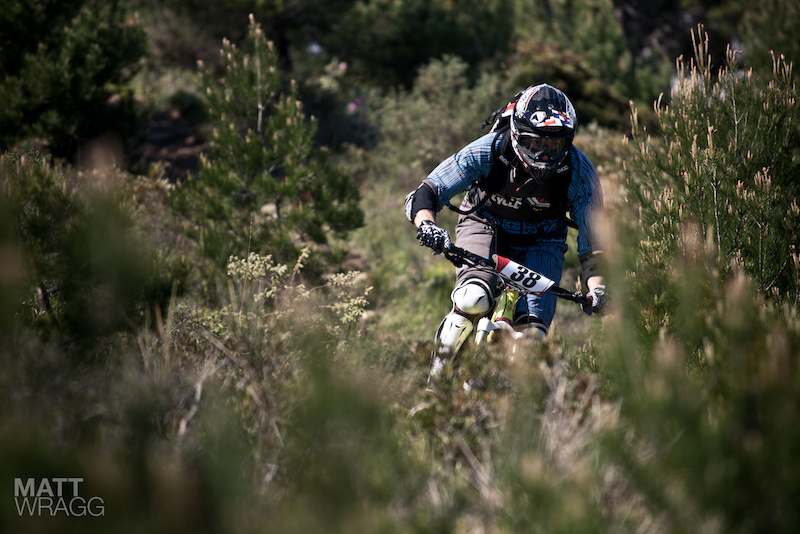 Another day, another rider whose name I can't find. 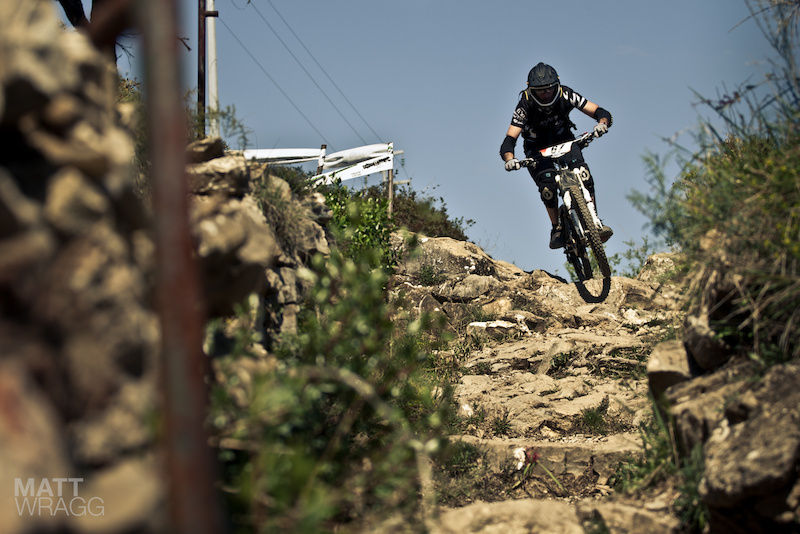 The tape at the top of the photo cuts off the inside line on this corner - you can straight line it if you hit a small drop to the right of the line. It was only standing beneath it that I realised that if you go too far right (and not by much, a foot maybe) there's a ten-foot deep hole you'd vanish into... They decided that it was probably a bit risky to leave in for the race in case anyone hit it blind. 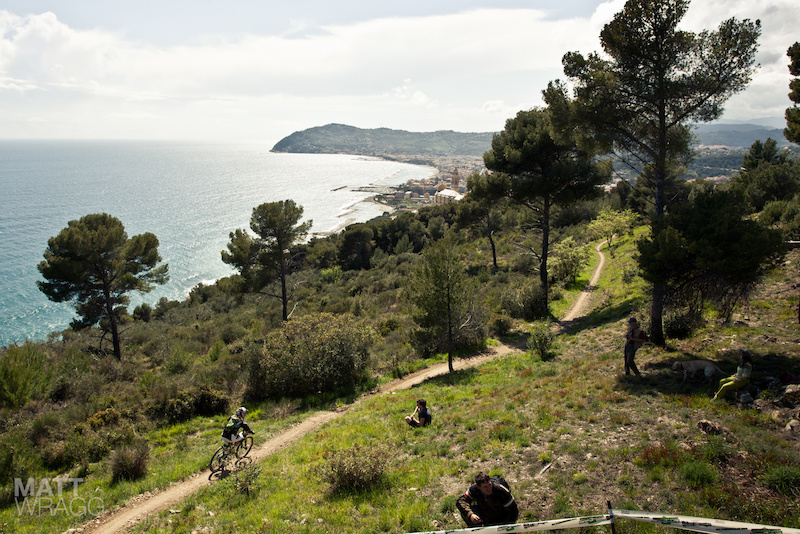 Almost there. There are just a couple of hundred metres of the course left from this part before you can take a leisurely descent down to the beaches of San Bartolomeo and Diano Marina below to find a cold beer and some warm sand to rest on... 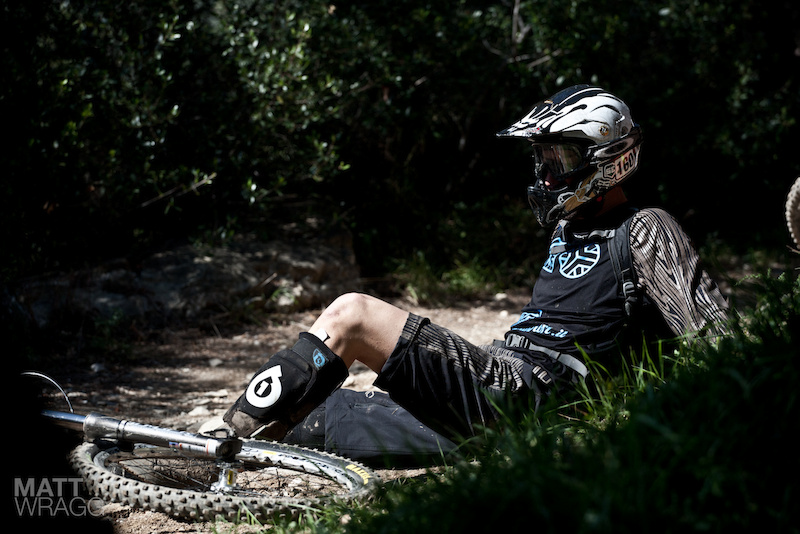 Not everyone made it down to the beach in one go, there were more than a few riders who crossed the line and then got cramped to hell.

And there we are. Race one is already done and dusted. Standing by the track with a camera it seemed to fly by, but going on some of the pained faces in the paddock it probably felt quite a lot longer in the saddle. George from Production Privee summed it up well when he said it was one of the most painful things he'd done. He was grinning though and there wasn't a moments hesitation when he was asked if he'd come back to do another on: "yes."

It's getting late now though and there's still the journey home to think about... We'll bring you full results and video later in the week, but for now it's time to sign out. For more information about the race and the series head on over to www.superenduromtb.com. In three weeks time the series hits Punta Ala in Tuscany and we'll be there, until then!

mattwragg Plus (Apr 16, 2012 at 11:46)
I'm working on some stuff around this now... I'm hoping to start having them done in a week or two as I'm building my enduro race bike at the moment. Although the first piece will probably be a bit about what enduro is and isn't.

mattwragg Plus (Apr 18, 2012 at 0:57)
No. People need to stop obsessing about shaving grams and think about how the bike will perform. Ben Cruz used to spend his days lugging a 40lb VP Free up the hills... If you want to spend your time gram-shaving go and ride XC.

Totally agree, I was actually down there for the event, the climbs are long (8km 400m climb for stage one i think), yet nearly every one rides with dual ply dh tyres, I saw lots of coil forks, some even had 170 mm travel. need to be used to moving around a solid set up going to light will just give you head aches for this, I spoke to Karim Amour and he told me his bike was a tad over 15kg. I saw many riders on 33 to 36 t single rings

And it is worth the trip even if you ll be in last half as not many events are in such nice locations and so well organised. And the people are friendly and italians seemed pretty happy to see a few foreigners at the event. Highly recomend it, i ll return there but fitter for the climbs. the special stages were awesome all different and challengiing with great flow in those trails

aadm (Apr 16, 2012 at 15:16)
great pics and good coverage again. Looking forward to read Matt's next piece on enduro racing in general. Also, Matt, you should mention that these races are great even if you're not top 20 or top 50 like the guys that are featured here; even if you finish 250th on 300 rider for example, maybe using a hardtail (separate category for them), there's some great emotion that will stick to you for a long time.

ghirubaldo (Apr 19, 2012 at 2:16)
The pic of my swimming-pool is very nice...thanks Matt, see you the next time in Diano Marina!! Alberto Hotel Gabriella