After a whirlwind debut at Interbike ’09, Team Geronimo has ramped up to full on tornado status. The Pro racers, staff and Junior Development Team of Team Geronimo are proud to introduce their 2010 lineup:- The Bikes -

As the USA Factory Racing Team for Banshee Bikes, Team Geronimo is proud to be aboard the newly released Legend MkII downhill frame, which is nothing short of phenomenal. Just days after its public release, Pro racer Graeme Pitts took the maiden voyage as the first in the world to ride this beauty. With less than 5 hours on the bike, Pitts managed a Top 15 finish at Round 2 of the Australian National Series at Shepparton. How does it ride? Let’s just quote Banshee Bikes owner Jay MacNeil, who said, “Anyone who rides this bike is almost cheating!” It really is THAT FAST. Team Geronimo will also be racing the Banshee Rampant in 4X and DS events. 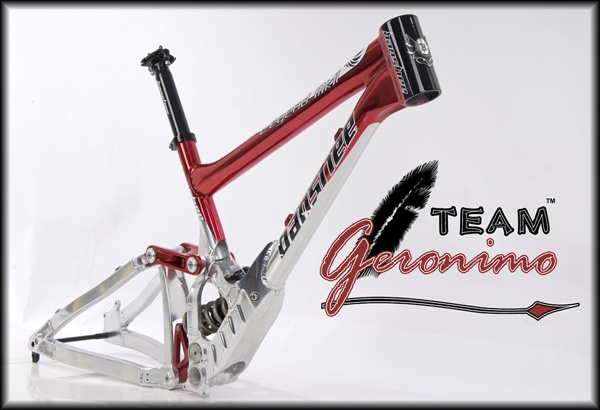 Custom made Wrex Racing apparel will outfit the team. Their purpose-built gear is truly remarkable, stylish, and will exceed even the toughest critic’s expectations. Wrex offers a full line of custom jerseys, pants, shorts, rash guards (silver-embedded for odor control and anti-microbial action), winter jackets, rain jackets, hoodies, formal wear (for banquets and sponsor meetings!) and more. They make it easy to be the best-dressed racer on the race course. Wrex Racing’s motto says it all, “Rule #1: Leave the competition behind. Rule #2: There is no rule #2!”

Underneath their custom kits, the team will be protected by Dainese gear. It’s a shame that such excellent, stylish protection has to be covered up. From the minute the body armor comes out of its shipping box, it is evident that this gear is state of the art, lightweight, supple and STRONG. Finally, it is truly comfortable protection - riders might even forget they’re wearing it! From Seth Graves of Dainese/BTI-USA, “We are excited to start the 2010 race season sponsoring such a great team of excellent racers!”

The team will protect their brains with helmets by Kali Protectives – a company making quick strides in the MTB protective world. Racers will keep their eyes on the prize with eyewear by Smith Optics. No team would be complete without casual shorts from Cowboy’s Fuzzy Duds – look for their signature wacko prints to compliment team livery when they’re off the course.

Hayes Bicycle Group is equipping the team with powerful Hayes Brakes systems, race worthy Sun Ringlé wheelsets, and Answer ProTaper bars and gloves. Racers will enjoy a buttery-smooth ride with the highly anticipated Manitou Dorado Pro fork and super adjustable Revox shock. Clayton Goldsmith of Hayes Bicycle Group commented, “Everyone on the team is a class act and as a group, this is exactly the type of team HBG wants to partner up with. Their choice of riders and equipment is going to make them potent, and I would say probably one of the most successful first year teams. They are also one of the few teams we’ve chosen to run the new Dorado Pro DH fork this year – so of course their Banshee rigs will be the envy of everyone in the pits! Expect to see big things from Team Geronimo in 2010!”

When the rubber officially hits the dirt at Sea Otter, the team will be hooking up in the corners with Intense Tyres. "We are extremely excited to work with such a great group of Pros and the Jr. Development team, as the Intense Tyre System line has been fully redone for 2010 and this will really help get the tires out in front of the fans and atop the podium with this excellent program" – from Pete Dylewski, Marketing Manager at Intense Tyre.

MRP’s Ryan Cranston also commented, “MRP is extremely proud to partner with such a world class squad. Team Geronimo will be rocking G2 chain guides, Camber cranks, and Podium chain rings as they hang it all out there in pursuit of victory in 2010! Watch out for these guys!”

WTB has come on board with their sexy new Devo seat, which will sit on top of FSA’s Gravity seat post. FSA will also keep the cockpit in check with their line of Orbit headsets. Obtainium Performance Products’ titanium springs bring superior performance to the handling of these stunning bikes in addition to shaving weight and precious seconds off race times. Point 1 Racing stems and platform pedals, ODI grips, Shimano drive train components, Crank Brothers clips and Framewrap come together to finish off the build of Team Geronimo’s incredible rides. 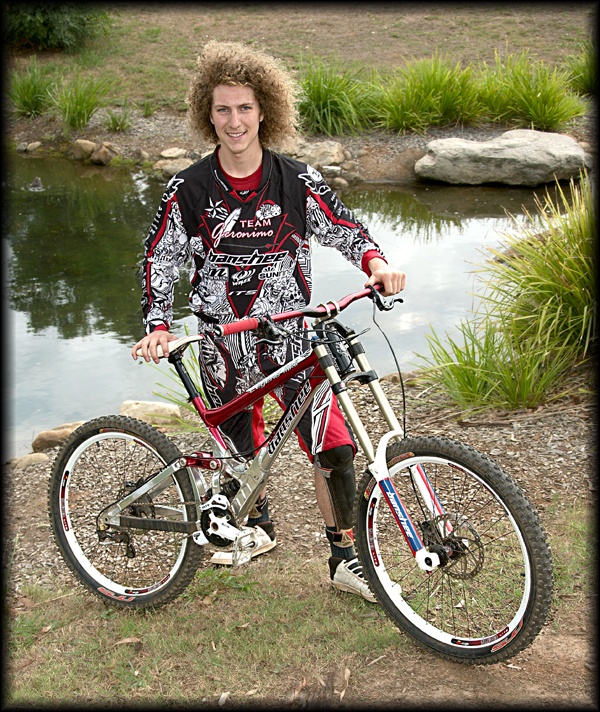 Graeme Pitts with the Complete Package
When traveling by air, the team will use the incredibly well designed, sturdy and lightweight bike boxes by Crateworks. Ogio has also stepped up to aid in the team’s travel comfort with their progressive line of gear bags, hydration packs, helmet cases, and race umbrellas.

Gene Hamilton of Betterride is the official skills coach of Team Geronimo. His techniques are proven, his guidance invaluable, and it is time for the gravity biking world to catch up with other sports by retaining coaches – Team Geronimo is honored to be working with Betterride. Gene comments, “I am excited to be working with Team Geronimo. I’ve coached Graeme Pitts and the Buell Brothers in the past, and I look forward to working with Rachel Bauer and Cody Eichhorn. They all have the potential to do really well, and have an impact on the sport. It is going to be a fun and successful race season with one of the best new teams on the circuit.”

James Wilson of MTB Strength Training Systems is the official strength coach of Team Geronimo. Wilson’s program has steadily become recognized as the premier mountain bike strength training system, especially for gravity racers. His workouts produce maximum results that correspond to decreased race times and injury avoidance due to flexibility. Wilson’s routines are sport specific, don’t require a huge investment in time and allow for quick recovery - almost too good to be true.

Taking time out from Tabata Intervals, James added, "I'm excited to work with a team that is obviously so dedicated to the sport I love. They've shown that they are serious about developing and supporting talent and I'm looking forward to helping them on their mission to make a splash on the racing scene."

Look for Team Geronimo at the 2010 Sea Otter Classic, Pro Gravity Tour, Mountain States Cup Series, US Open, Crankworx Colorado, Crankworx Whistler, Fluidride Cup Series and select other events. The team is gearing up for entry into the World Cup Series in 2011.

The stokage meter about this team is cranked all the way up, and for good reason – they have incredible talent, vibrant personalities, and a true sense of professionalism on and off the race course. 2010 is going to be a phenomenal year. 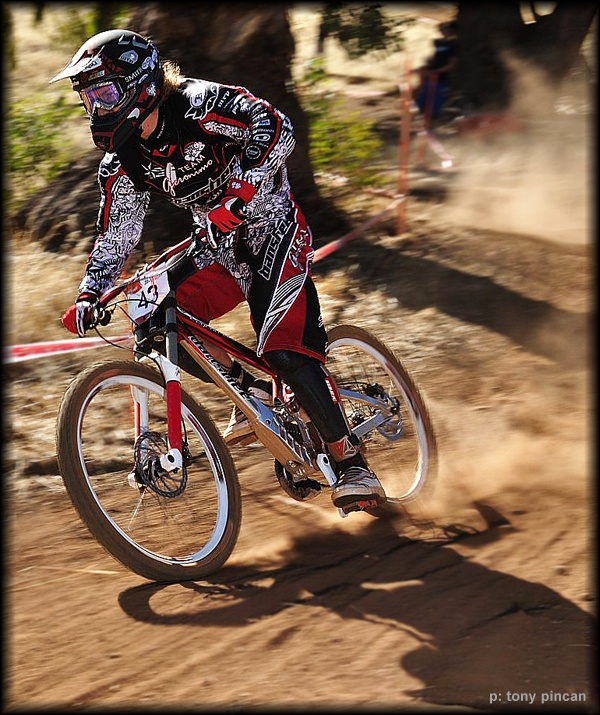