The long way to the right moment

Join Pinkbike  Login
52 Comments
The true story about Paul, myself, and Mr. Frog.

First we had to find a location where we had fluent water and a nice washed out corner. The best locations are often not that far away from home. Fortunately we found this only 5 min away from my place which was good ´cause of the wet cold clothes after the shoot. 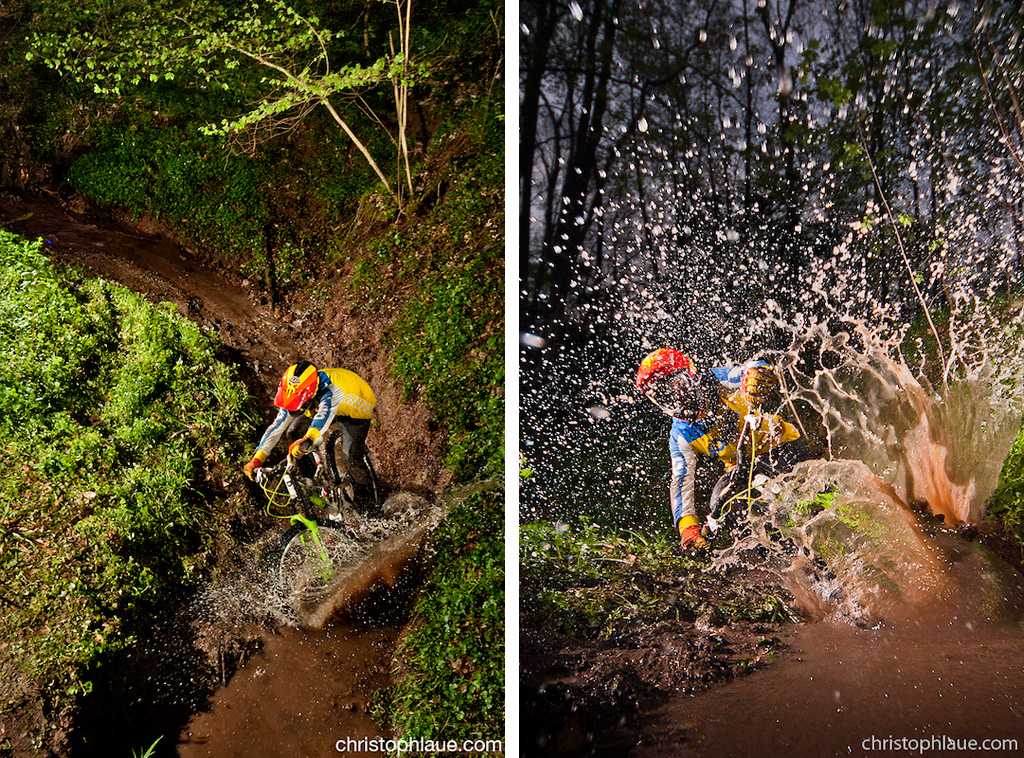 We built up a run along the small brook, so Paul had enough speed to get the corner right. In the beginning he was cautious getting wet, but after his first bail he didn't care anymore.

I tried some different angles with the sun until she went down and darkness came up. 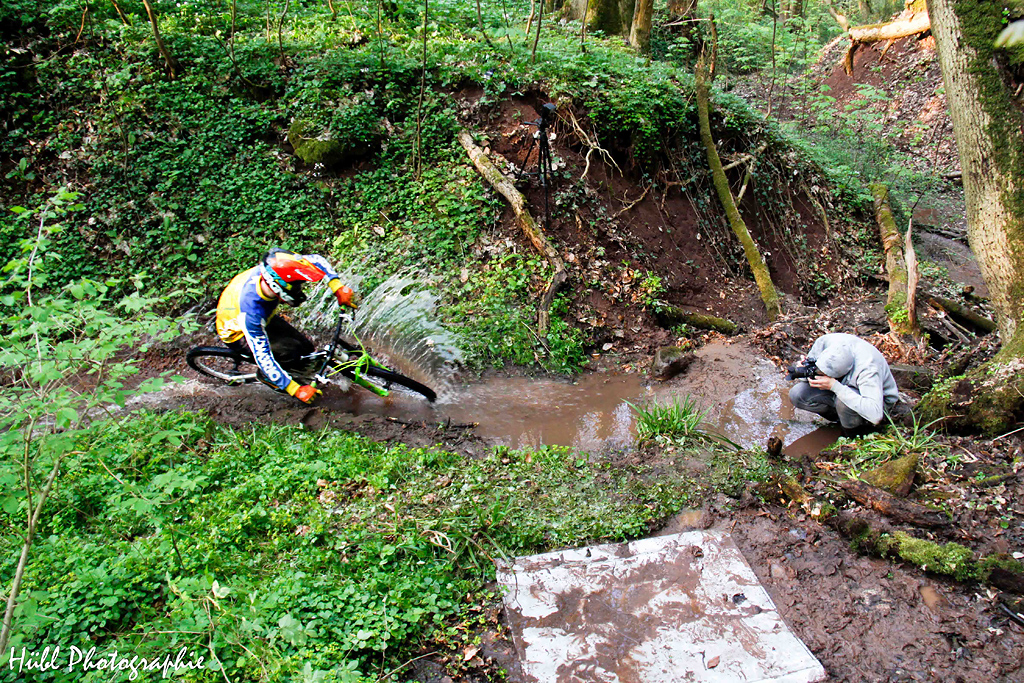 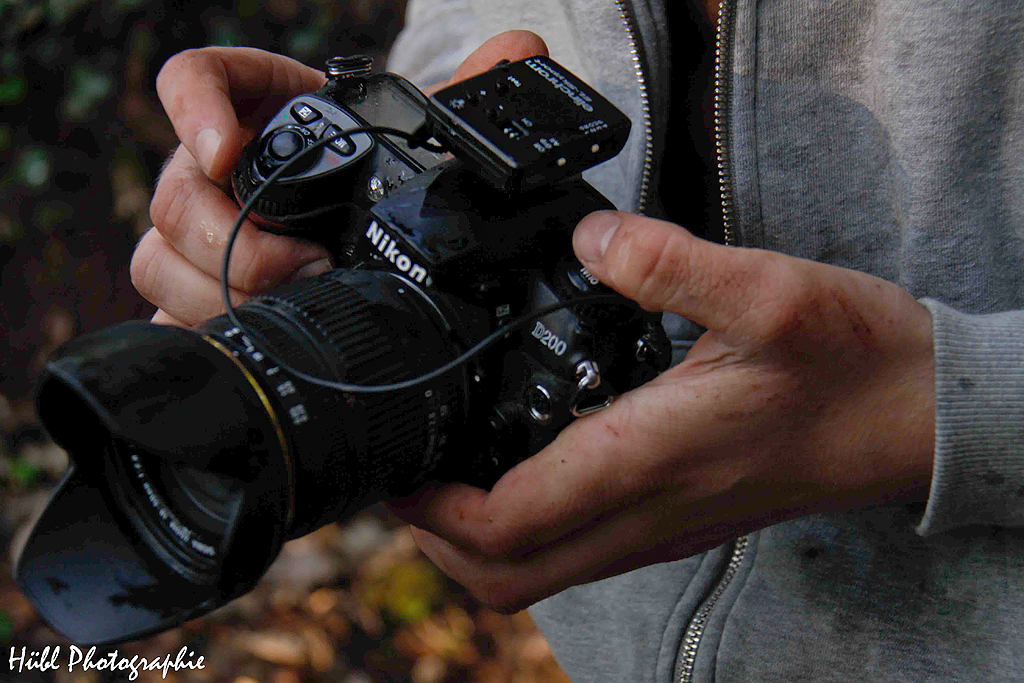 I used my Nikon D200 without any water protection, which wasn't the best idea. It was soon covered with sand and muddy water. The lens made some odd sounds while focusing. 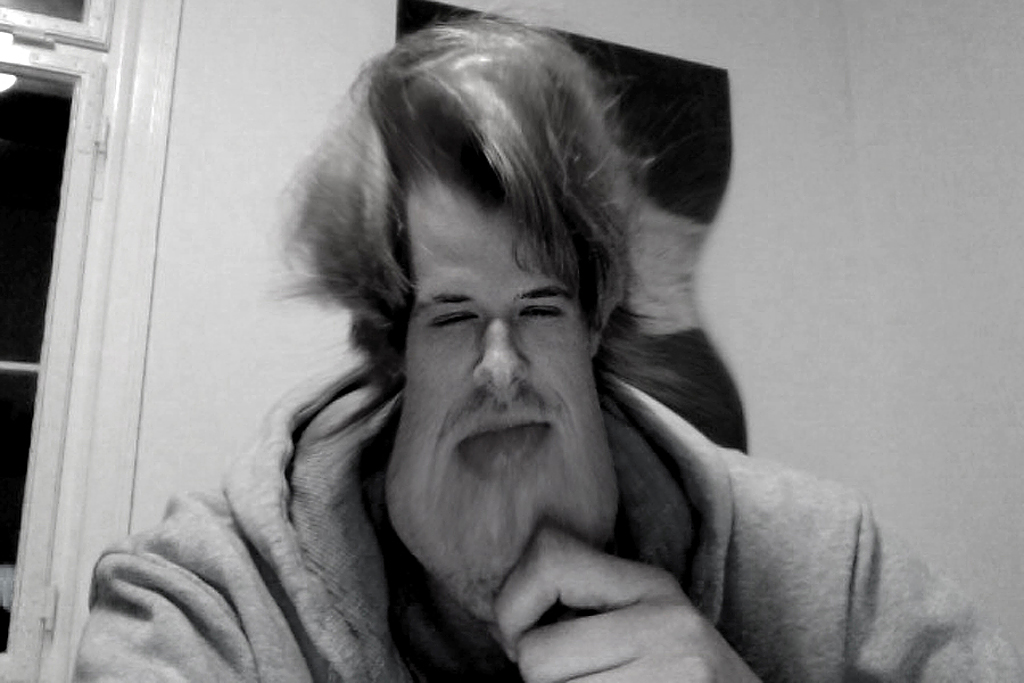 In the evening i checked my pictures and decided to give it another try because the water wasn't that sharp.


Some days later, we came back to the same spot with a different camera and plastic bag for protection. The advantage of the Nikon D70s was the way faster flash synchronization. 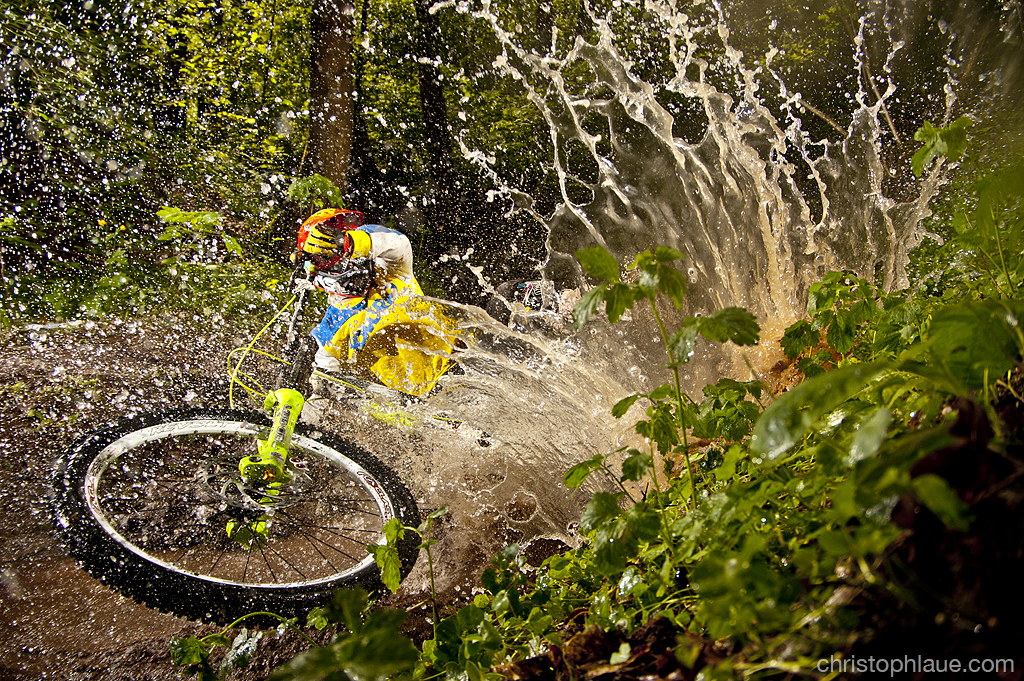 After a few touch downs in the cold water Paul was awake and totally motivated. 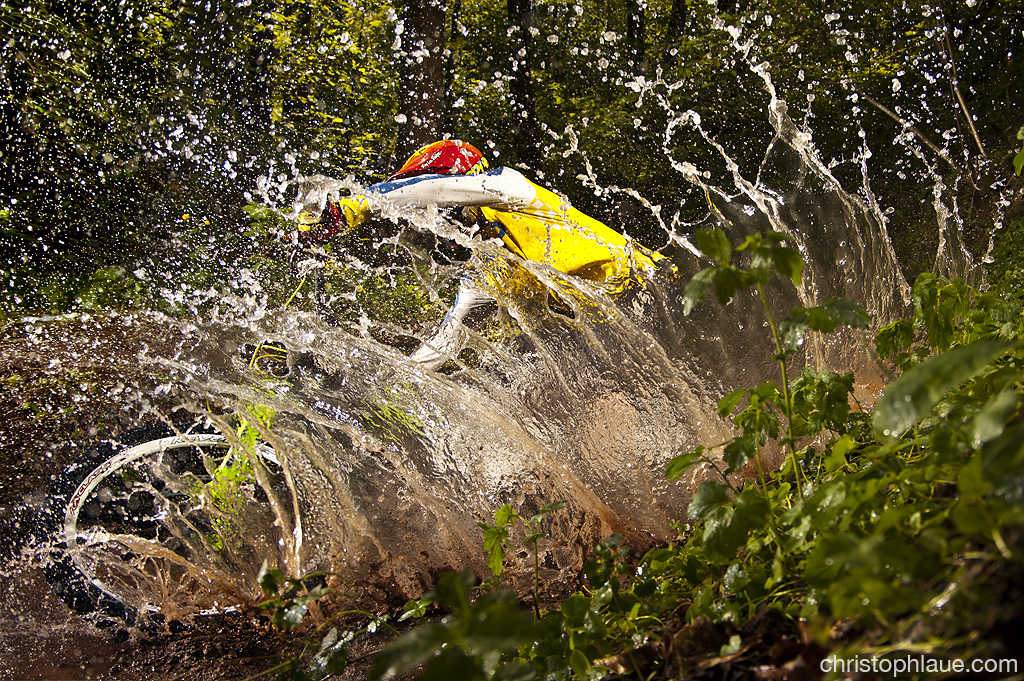 Finally I was happy with the result. 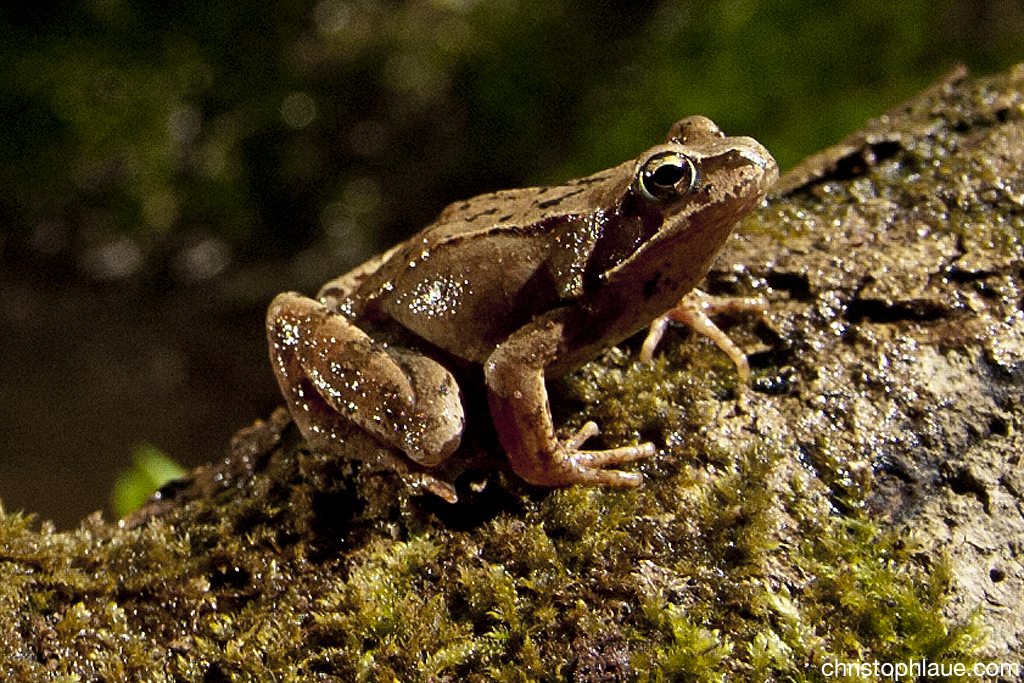 suddenly, a frog passed my way and a new idea was born. Mr. Frog had to be in the picture.

The only problem, Mr. Frog was absolutely lazy. He didn't jump at all at the same time Paul was riding behind him. 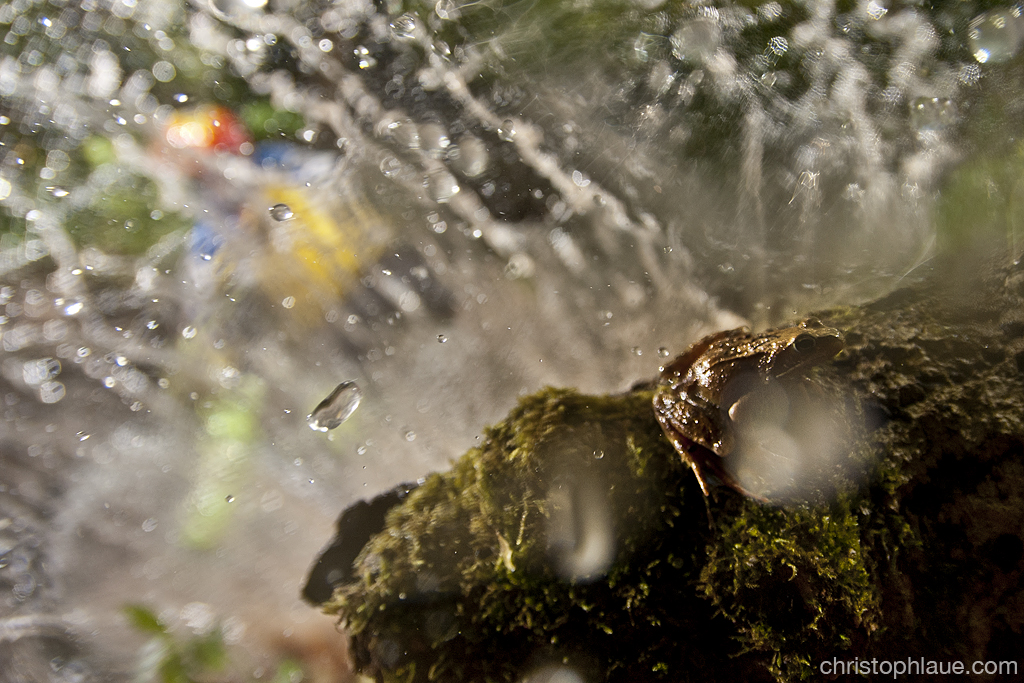 It seemed Mr. Frog enjoyed the splashing water. I prefer it more dryly. 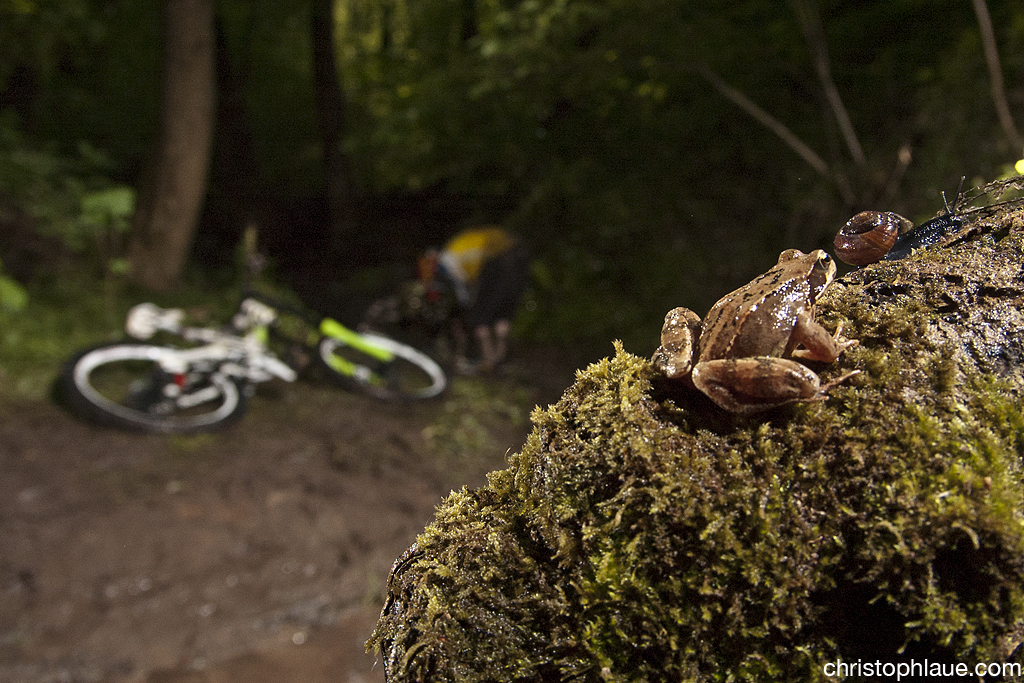 After many many tries a snail paaaaaaasssseeeeeeeed. Quite a while later we could continue.

Thanks to Mr. Frog, Paul Ehm and Max Hübl! Special thanks to Mrs/Mr. Snail for the breeeaaak!

duncanp (Oct 12, 2011 at 15:48)
You must have very impressive reflexes to catch the frog like that! Its nice to see such an insight to one of the more unique photos on this site.

bigpeaches (Oct 17, 2011 at 0:52) (Below Threshold)
Shutter RATE speed gets shots like this mate, the ability to take 6 or 7 or even 10!!! shots a second means pushing the button for the whole sequence then out of the 40 or so shots taken, pick the best one

...... no one could do that with just one click.... but great shots non the less Well done Christoph

redrook (Oct 17, 2011 at 2:31)
peaches, no mate you would never take 40 shots in sequence. Mabye 3 to 5. You'd be surprised what you can react to with a camera. Plus with a flash setup you can usually only get one shot that maintains your composition. A frogs jump isn't so fast that "no one could do that with just one click".

MattyBoyR6 (Oct 17, 2011 at 7:40)
Snapshots are taken with the machine gun approach, photographs are made like Christoph explains above.

HenryR (Oct 17, 2011 at 10:43)
as redrock mentioned, you can't do sequences with a flash. the flash uses a big capacitor which take a few seconds to charge up between flashes.

The-Medic (Oct 17, 2011 at 10:46)
Matyboy: you're not a photographer either that or you're just a bad one... MOST if not ALL good shots come out of what's called "burning film" (although it's been a long while since film was involved

) but in reality, the more shots you take, the more chances to get a good one you have. In fact, the story above proves that. He may have shown 10 shots, but I'd bet he took hundreds including multiple shots per run-in the guy made. It's just how you do it with action shots... I'm not saying there was no skill involved, but ryou've got to take as many images as you can and now that were in the digital age it's even EASIER to do then it was for those of us who actually had to "roll our own" (T-max anyone???) or buy film.

This is SUCH a sweet story to go with one of the most unique pictures I've seen in quite awhile. Awesome shot to say the least.

Views (Oct 17, 2011 at 11:08)
actualy what you learn in the process of getting a photographer is to set up your stuff so you do not need to shoot shoot shoot, for several factors.... example as mentioned above cause most flashs require load time so you can maintain your composition and its mostly a gamble to get the flash fully burned down when you do 3-11fps. at the end doing repetitive shots helps to get your rider in the exact position where you want him but its not the best way to get your photo exactly where you want it to be.

The-Medic (Oct 17, 2011 at 11:24)
sure, you can do ANYTHING in one shot, but it's a gamble and NO, you won't get the best results... You guys are incorrect about the flashes, alot of flashes CAN do sequences, it's not exactly new tech aye... They give off more consistant light at a single flash, but they can be programed to do sequences or just run multiple units.

Views (Oct 17, 2011 at 11:40)
dont worry, your absolutly right, what i mean is more that the preparations and experience/knowledge of setting up a shot properly and making a plan, if its in your head or on paper, is often overlooked cause theres the neat click click click function. it is reality that most shots get shot very very often every professional does that, im working in several commercial photostudios, you wouldnt believe what some of the well known photographers do lol STILL it is important to get your head around what you want to do and prepare it, thats what divides the professional and the amateur.

redrook (Oct 18, 2011 at 2:30)
Hate to tell you this Medic, but nothings changed mate. All it means is that you don't use a darkroom, or use up loads of film. Digital has just made photography more accessible, and of course you can see what you have before you develop it. Not exactly cheating. A good photographer, a camera does not make.

Also, the "machine-gun" approach is what's used for pretty much every race shot you see that isn't using flash, so the photographer can pick the best one often because he's pre focussed. Sven Martins great at it.

The picture of a jumping frog is just sick, such a good stretch and a superman posture - perfect timing!

Protour (Oct 17, 2011 at 8:18) (Below Threshold)
Dumb photos, I don't see anything impressive here, except the jumping frog shot. But why not just take pictures of jumping frogs? Combining it with shots of a mountain biker repeatedly splashing into the same shitty corner over and over again? Even the frog got bored and decided to bail.

ryderup (Oct 17, 2011 at 12:06)
Someone got up on the wrong side of life here, buddy. When nothing good to say comes up in your thoughts,say nothing and just keep it to yourself until something nice or constructive comes up,then talk. peace.

oodboo (Oct 17, 2011 at 6:09)
Seeing more photo stories at the moment. Hardly suprising that people are digging out their best shots and making an article about them with the moninations for photo of the year running.

parisgore (Oct 17, 2011 at 8:52)
I found a frog yesterday while doing a car shoot. started taking pictures of the little guy, and realized those things are damn hard to catch mid jump in a photo. for that I give you mad props.

Varaxis (Dec 22, 2011 at 13:20)
After more tries, a Pop Tart Cat flew by and double rainbows glimmered in air, but Christoph was too entranced by the sight that he failed to photograph it.

That or he expecting a triple rainbow... should've relied on machine gun shooting, bro. You know your camera can shoot 3 or maybe *10* shots in a second, AMIRITE? Imagine if you did that instead, then maybe you could've photographed that unicorn too and picked out the best one out of the 40 shots to post!

Lax30 (Oct 17, 2011 at 13:39)
laue you would probably be able to get some crazzzzy pics with the new pocket wizards that allow for stupid high sync speeds with ttl info

thestraightline (Oct 17, 2011 at 0:31)
Loving the effort put into this... I know it can take forever before THE shot is in the box, but it's just so rewarding when it does.

sheiffa (Oct 17, 2011 at 13:02)
there are so many doub boring photos taken by pros that don't bring anything new. It's nice to see lot of dedication to get a really creative shot!

chris-adam-media (Oct 17, 2011 at 5:32)
those elnichrom triggers/ recievers make me want to shoot myself in the face they're so temperemental. on the other hand, sick photos and a cool little story!

dualsuspensiondave (Oct 17, 2011 at 12:39)
Good photos! Jacking that trail system up by riding it in those conditions though. Bad impact on the environment.