On a sunny Saturday afternoon at the foothills of the Rocky Mountains, City of Boulder officials led a ribbon cutting ceremony, marking the official opening of Valmont Bike Park, a 40-acre paradise for cycling enthusiasts of all ages, abilities and interests.

Features of this game-changing facility include a progressive slopestyle course, cross-country trails, a dual slalom track, a UCI-approved cyclocross circuit, pump tracks and dirt jumps. Best of all, the park is free and open to the public.

Fifteen years in the making, Valmont was a true community effort that came to fruition through the united effort of a passionate cycling community, a forward-thinking parks and recreation department, and one of the best bike park builders in the business, Alpine Bike Parks, LLC out of Whistler, Canada.

“We feel like our team is the best in the business,” said Alpine Bike Parks’ founder and principal owner, Judd de Vall, who spent the better part of a year living in Boulder while overseeing the project. “But just because this park is built by experts doesn’t mean it’s for experts only. Every section of the park is progressive, so it’s a truly all-inclusive experience that allows riders of all skill levels to enjoy the park and safely improve their abilities.”

This uniquely thoughtful approach has made Alpine Bike Parks an industry leader in the field of bike park and natural surface trail development. Their service offerings range from feasibility and planning, to design and development, to construction management, to feature fabrication and installation, to an extensive array of post-construction services, all of which were on display at the grand opening of Valmont. 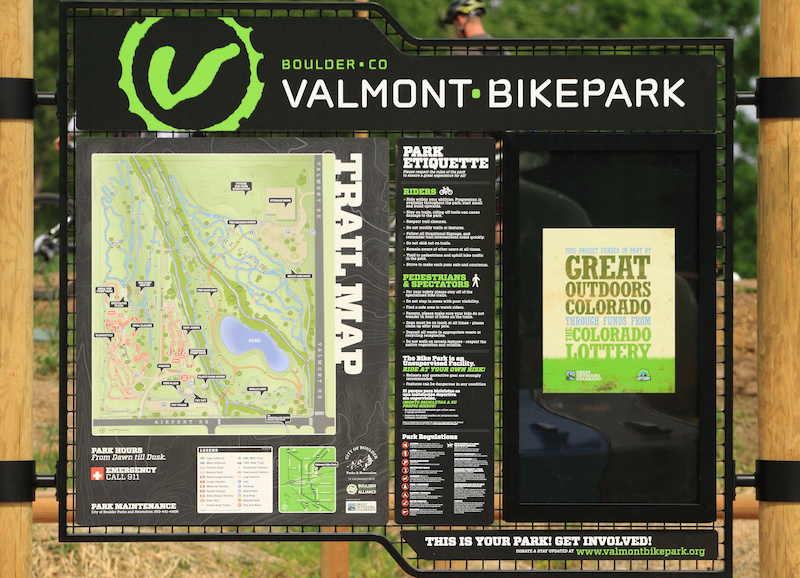 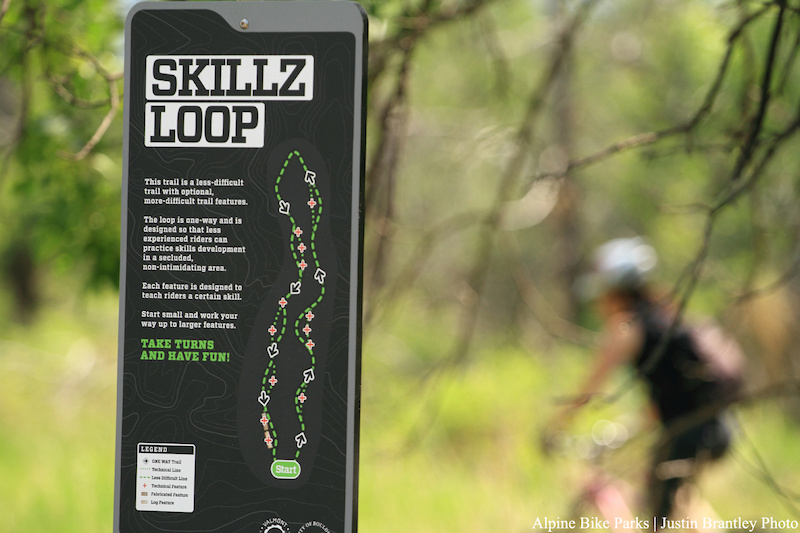 This loop looked fun to ride! Here a mom follows her daughter around the loop! 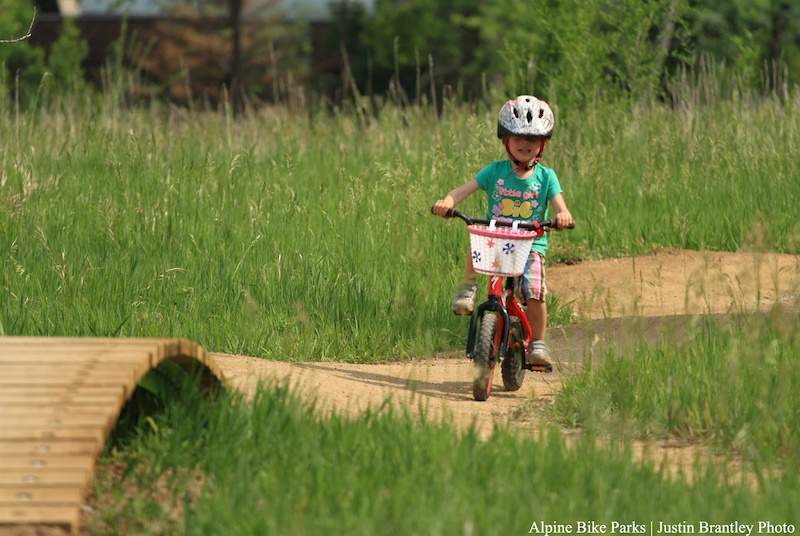 This "little girl" is stoked to be riding! 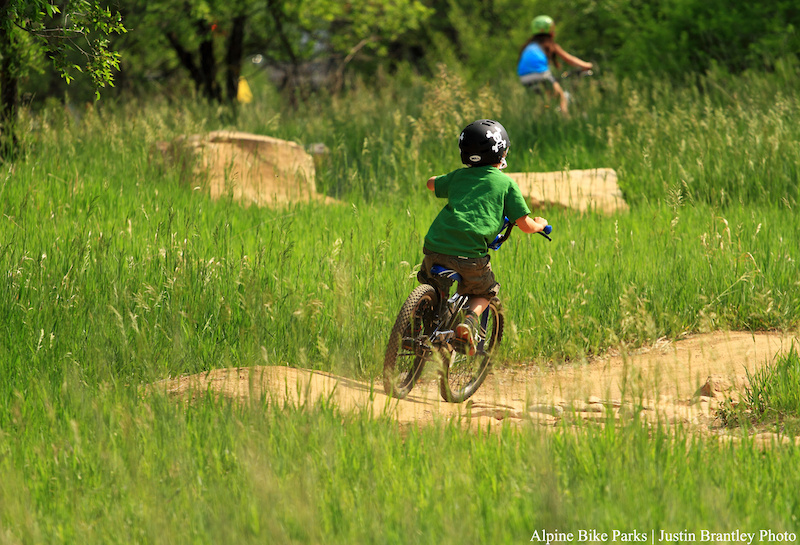 Pinning it.
“This is exactly what we were looking for when we started dreaming of what this park could be,” said Mike Eubank, Valmont’s post-construction project manager. “Just look around. You see such a great cross-section of user groups—and they are all smiling!” 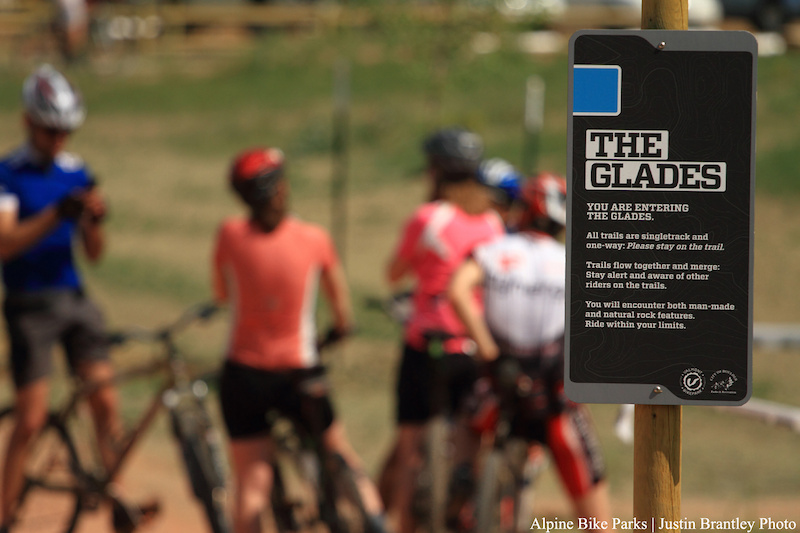 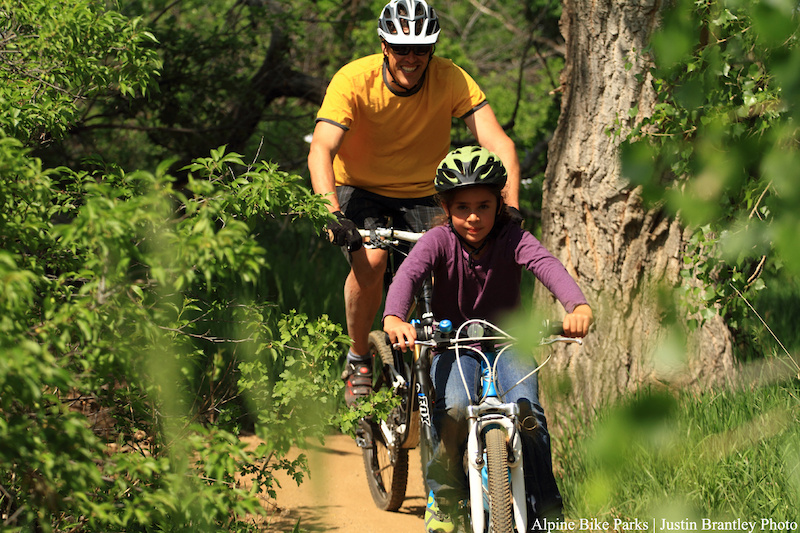 Get out there and ride your bike! Valmont has it all! 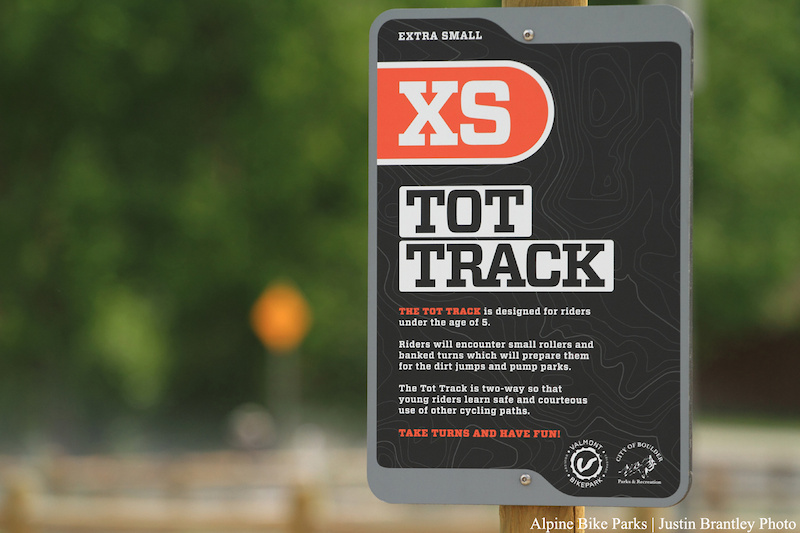 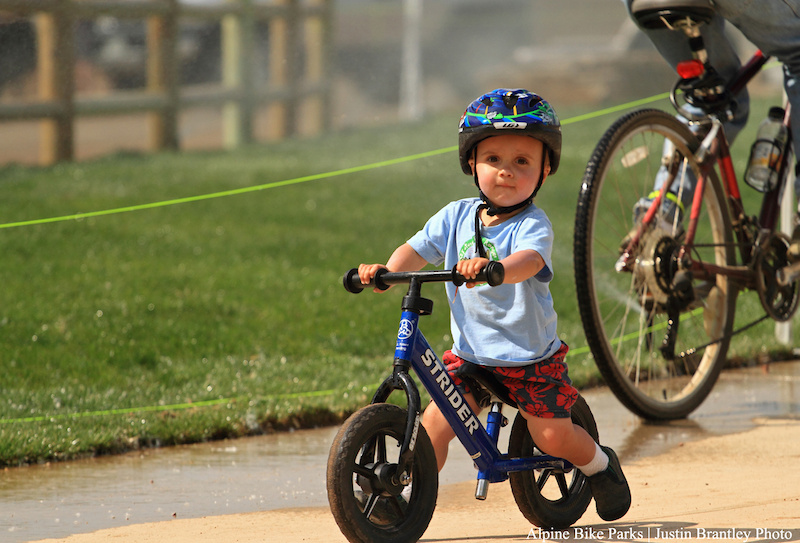 Any rider on a Strider is cute! 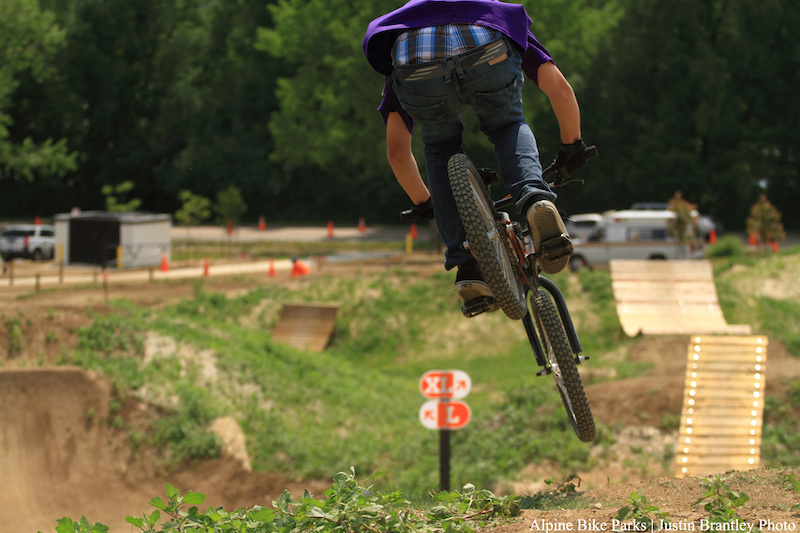 Tons of lines to choose from as you drop in! This bmxer was shredding all day! 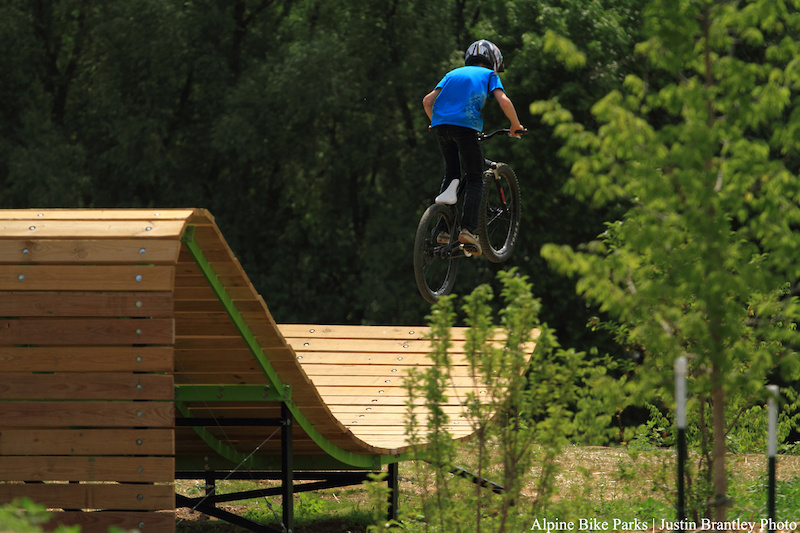 This little guy was killing everything! Here he is sending the biggest line on the course! 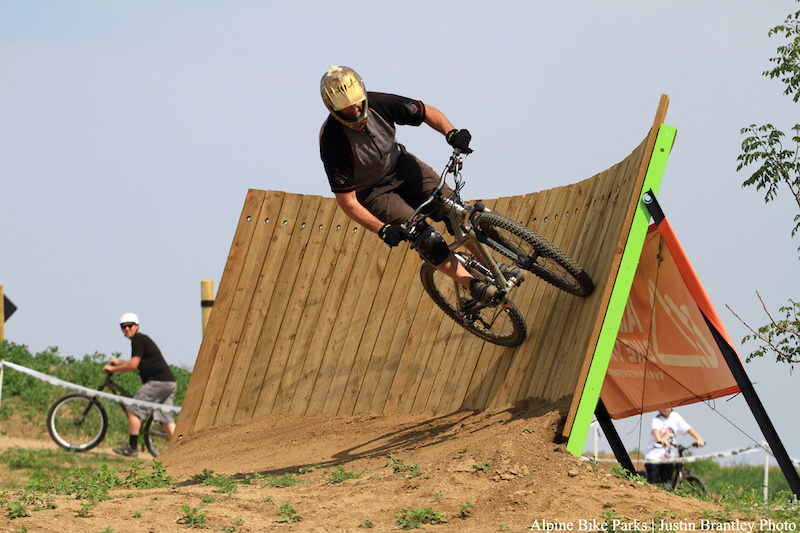 Hitting up the wall ride on the medium slopecourse! 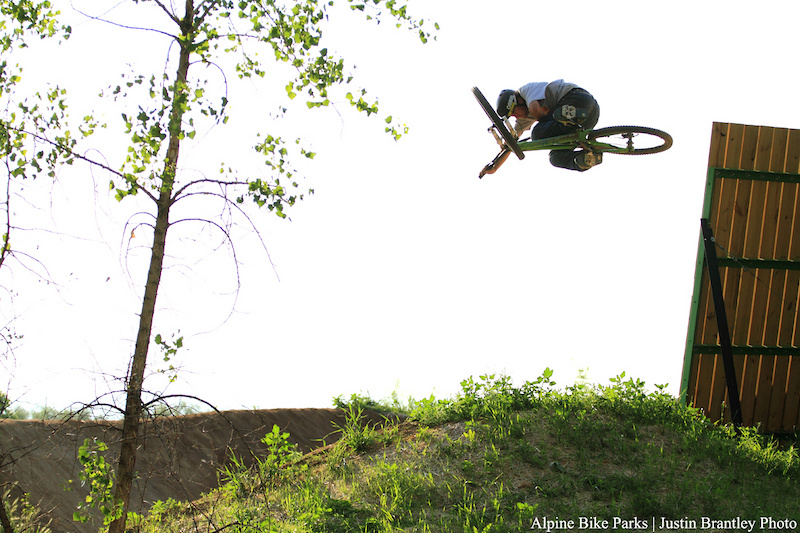 Giving it a bit of a table off the wallride! 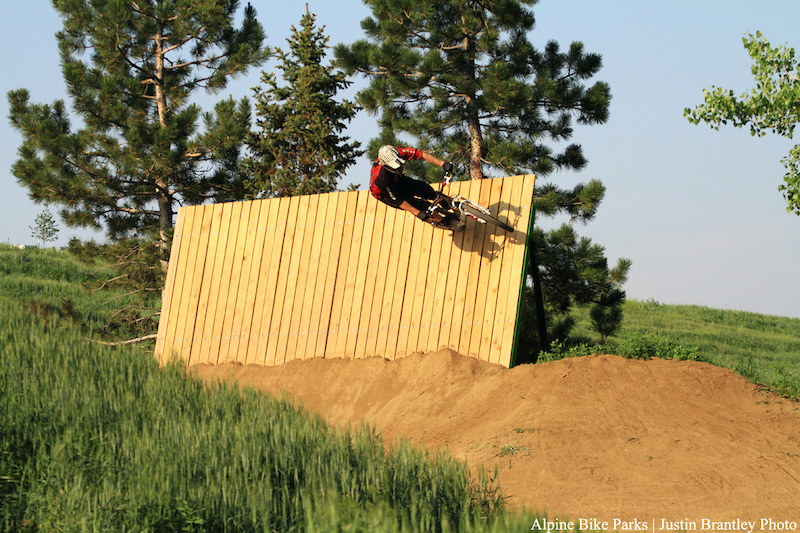 Same wallride as above picture. 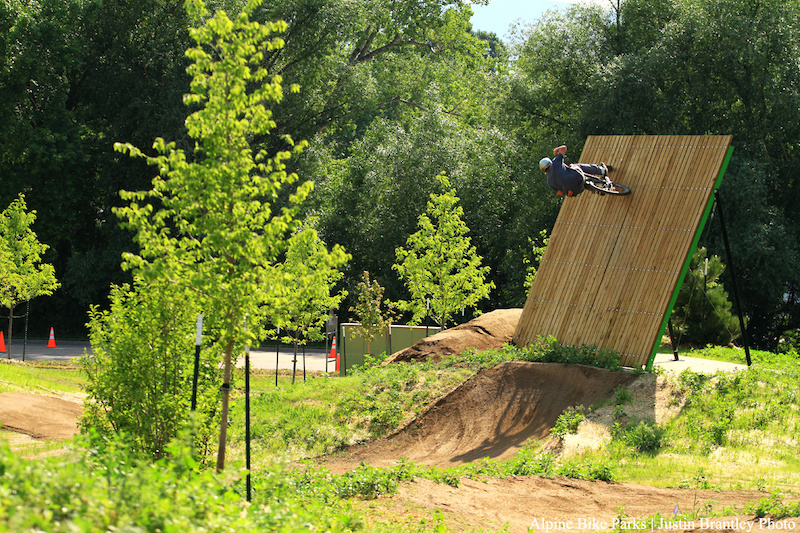 Opening day at the Valmont Bike Park. Cob getting to the top of the wall at the bottom of the XL line! 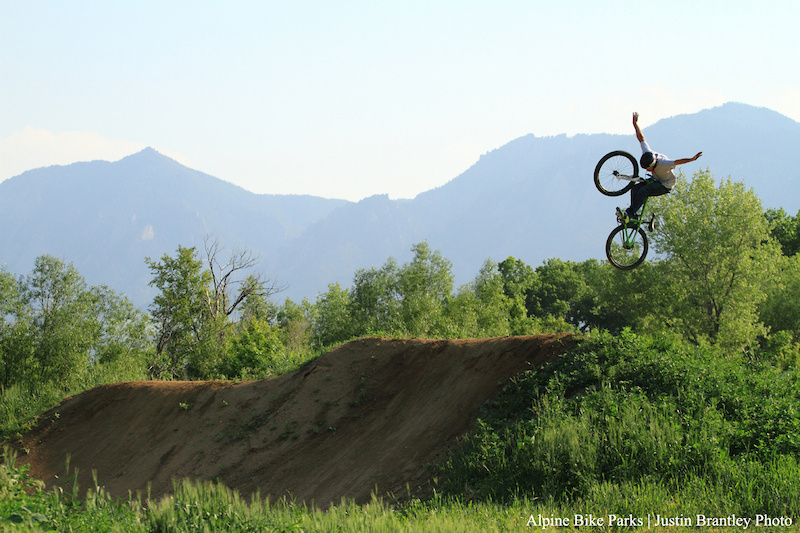 R-Dogg was throwing down on every run on the new dirt jumps at the end of the day! Here he does a nicely extended tuck no hander! 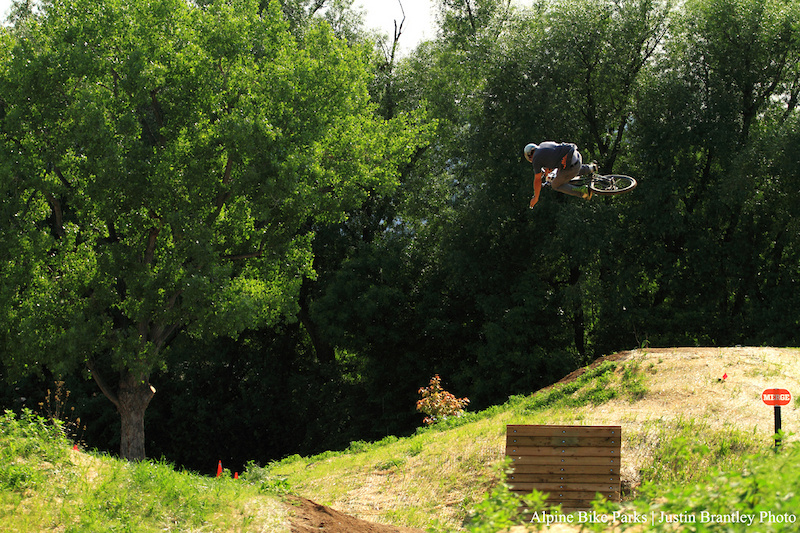 Cob aws the crowd with a nicely boosted table! 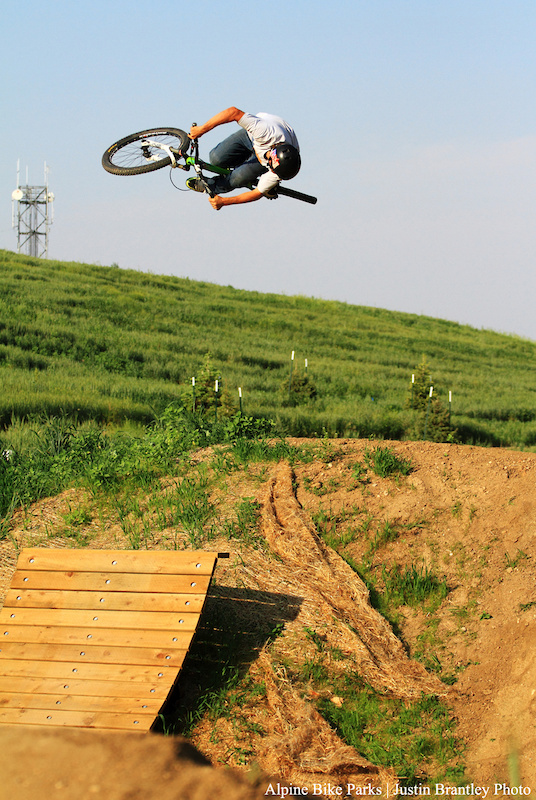 R-Dogg was keeping the crowd entertained with all sorts of triclks, but there is something about R-Doggs 3's that just make you stop and think, WOW! 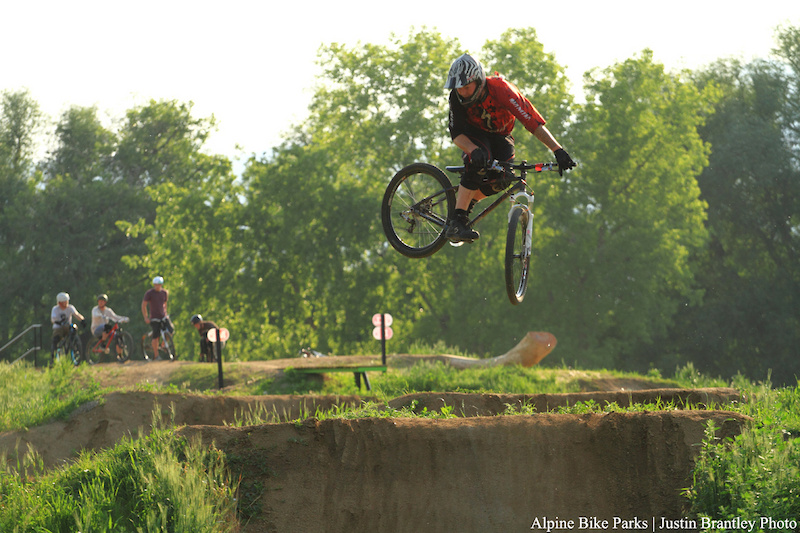 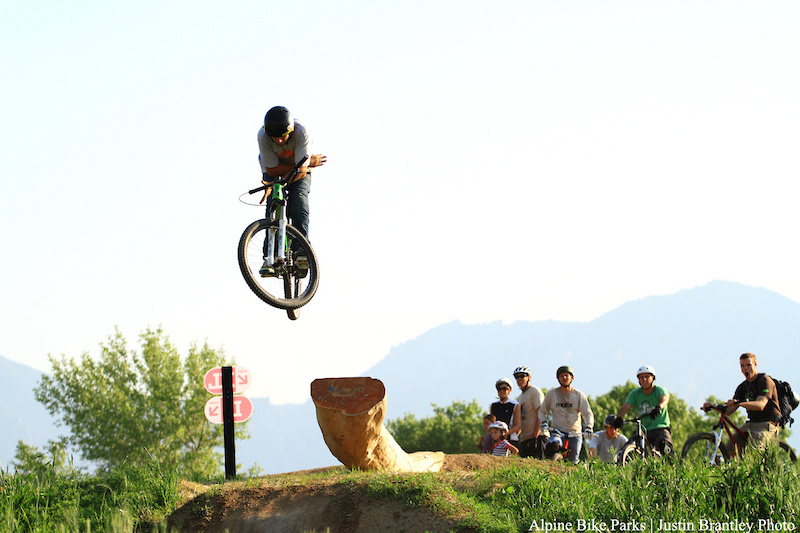 Bar spinning the log drop in on the dirt jump line! 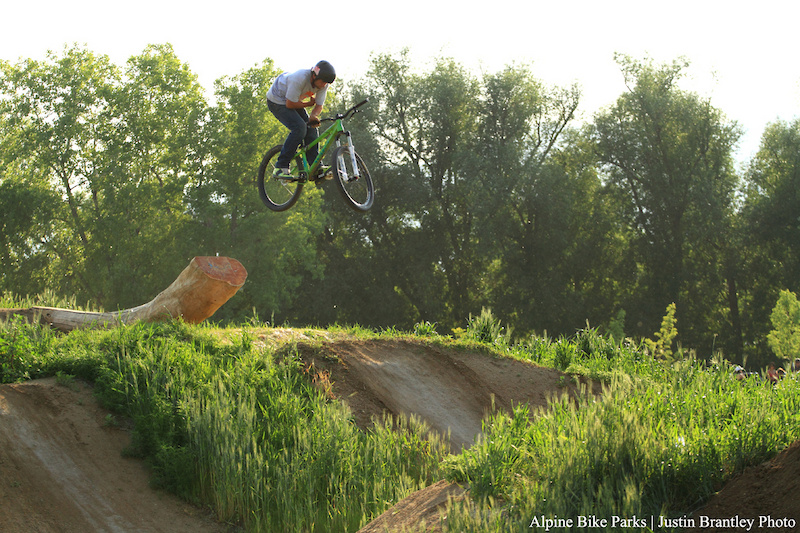 "Hey R-Dogg, do that again!"
The new park will be open year round, in part because of Alpine’s ability to create trails and features that drain quickly and are not be negatively impacted by precipitation.

And the bike park revolution won’t end in Boulder. Already Alpine has broken ground at the Red Mountain Adventure Park in Woodland Park, Colorado. This will be a collaborative effort between expert skate park builders Spohn Ranch, and Alpine, which will create a set of cutting edge downhill BMX trails.

Alpine has also been contracted to design San Francisco’s McLaren Bike Park. This community-driven project will take a previously neglected swath of land, and turn it into a valuable city resource, where riders of all ages and abilities can safely recreate. The community envisioning process for McLaren Park begins this Saturday, which will allow the community to help draw up the design for their new community resource.

“It’s clear that these types of municipal projects are gaining popularity with land managers and city officials,” said de Vall, a former professional mountain bike racer who founded Alpine Bike Parks in 2007. “When you can bring together a community in a way that’s healthy, sustainable and fun, that’s obviously a good thing.” For more information, visit Alpine Bike Parks.

specialized15 (Jun 17, 2011 at 19:29)
Talk to your local PAL orginizations! (Police Activities League) Most of them have never heard of these kinds of parks before and my city is actually thinking of building smething like this.

Leesethebeast (Jun 17, 2011 at 20:26)
Definately not the first DirtBag81611, but hopefully not the last, with the collonade and Duthie hill open in washington it is great to see more following their example!

andrewdionne (Jun 18, 2011 at 9:19)
you guys are so lucky getting stuff like this, London ON is a shitty place to live, they pamper the skateboarders and every dirt jump made in this city just gets destroyed.

specialized15 (Jun 20, 2011 at 10:00)
they think the skateboarders are the bad kids and if they don't pamoer them then they will grafitti thiangs and vandalize the city....but really they're just pussies who grow their hair like justin beiber.

ac9294 (Jun 17, 2011 at 16:28)
I have been there twice already and it's with out a doubt, Disneyland for bikes. What is so impressive is that not only is it free but, the skill it takes to ride the XL tracks. It is for advanced riders and noobs and eveything inbetween. I live only a hour away but feel angry that its not already in my town. It's just that good! They even have an automatic sprinkler system that keeps the track perfect.

beaskiro (Jun 22, 2011 at 17:05)
to DirtBag81611 I am almost certain this is not the first free public bike park, the most money and time budgeted for a public bike park yes, but first no. I have built two in Co, Grand Junction and Fruita. Regardless Valmont is sick!

waterfall99 (Jun 17, 2011 at 13:34)
such a sick park! Reminds me of a snowboard terrain park which is really cool with all sorts of sick features! Well made!

c2crider (Jun 18, 2011 at 4:39)
That places looks awesome! Good to see it as a community owned project that is free to ride as well, Im hoping the uK will see some of that soon!

alexshirley (Jun 19, 2011 at 17:09)
That's awesome. My local bike shop is working with the city to get something like this in our town. As if Southern Utah didn't have enough places to ride, I know I'm very fortunate.

simongonesurfing (Jun 23, 2011 at 13:31)
Anyone know if there are any houses for sale here?! My little one is almost ready for a balance bike - he'd love it on the tot-track! Awesome venue, not jealous in the slightest...

ValmontWeb (Jun 18, 2011 at 6:19)
Awesome article! Just wanted to include a link to the Valmont Bike Park web site. Check us out at bouldermountainbike.org/valmontbikepark

epjimmyd (Jul 3, 2011 at 20:15)
Frisco, CO has a new bike park that opened yesterday!! Its not Valmont but its only 10 minutes from me.
friscopeninsulabikepark.com

Parkerridesakona (Jun 20, 2011 at 19:26)
i am suuuuper stoked that this is fifteen minutes away from me! Still haven't had a chance to go there, though.

brule (Jun 18, 2011 at 11:33)
Isn't there a nice park south of you on Vancouver Island that guys from Straitline have been working hard to promote?