The Gstaad-Scott team's sixth and final stage of the Tour de Pump is here! The team end their journey at the opening day of the new bikepark in the heart of Zurich, Switzerland. 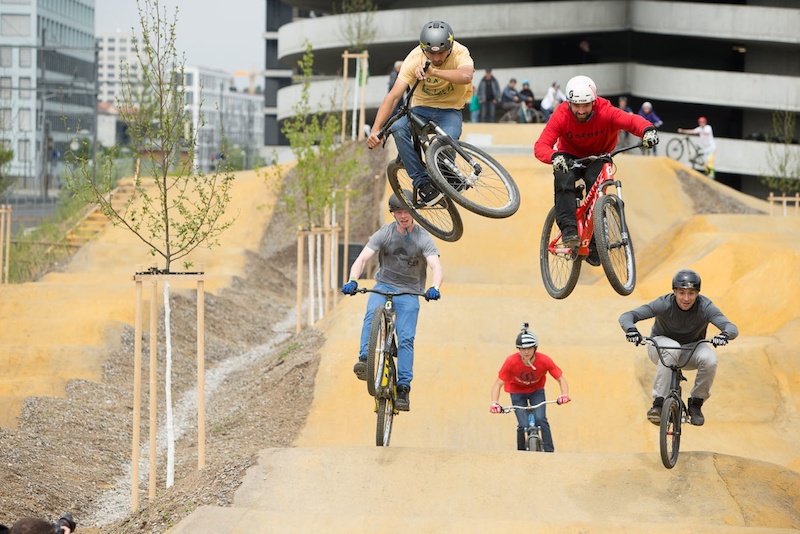 The weather game seems to be a pattern of the Tour de Pump. It only took a few laps in the brand new bikepark Zürich until it started raining. A few minutes later, the rain turned into hail! Our drones had to land and hide under the Red Bull tents until it stopped pouring down. Thirty minutes later, we tried again, but it only took another ten minutes until it poured again. This game continued pretty much all day long. 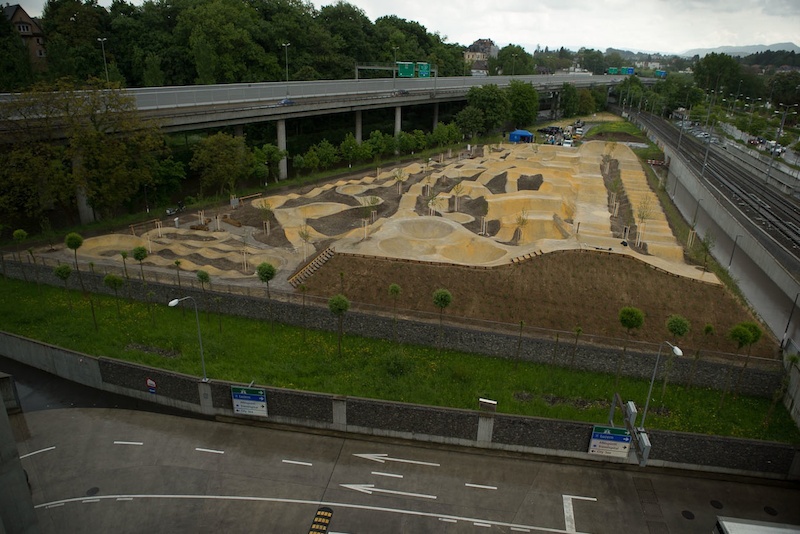 Nevertheless, the Gstaad-Scott riders and the guests from Timo Pritzel's Scott Voltage team, Louis Reboul, Benoit Chauvet and Timo Pritzel himself, kept riding all day long, pulling out tricks and lines that we didn't imagine when we built the park. 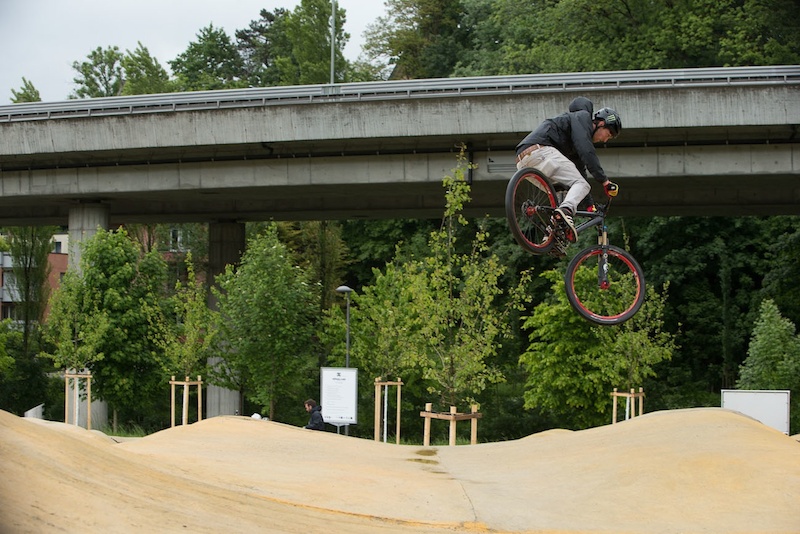 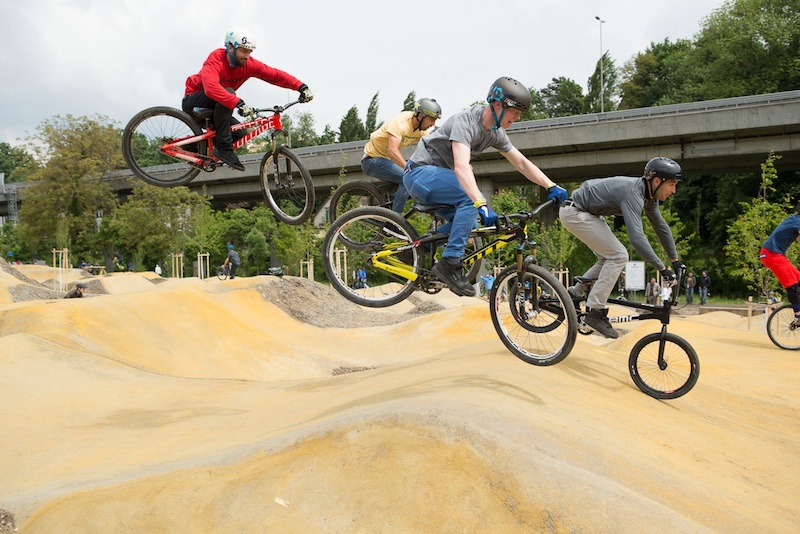 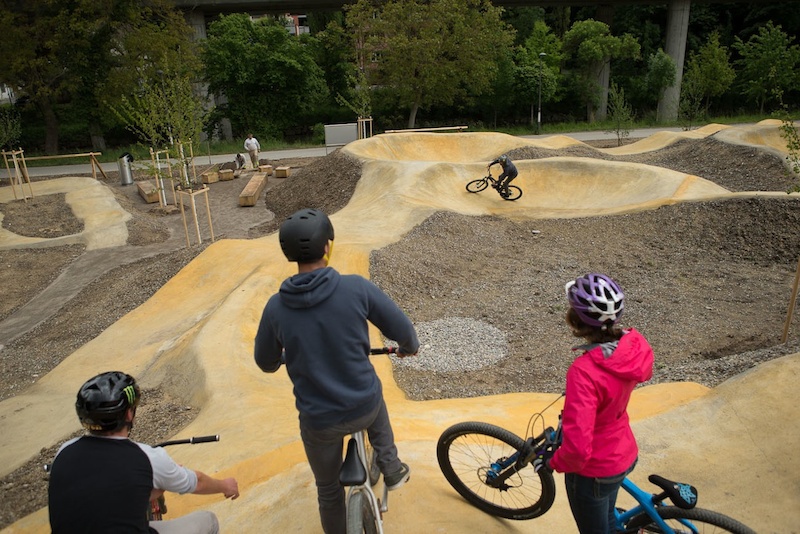 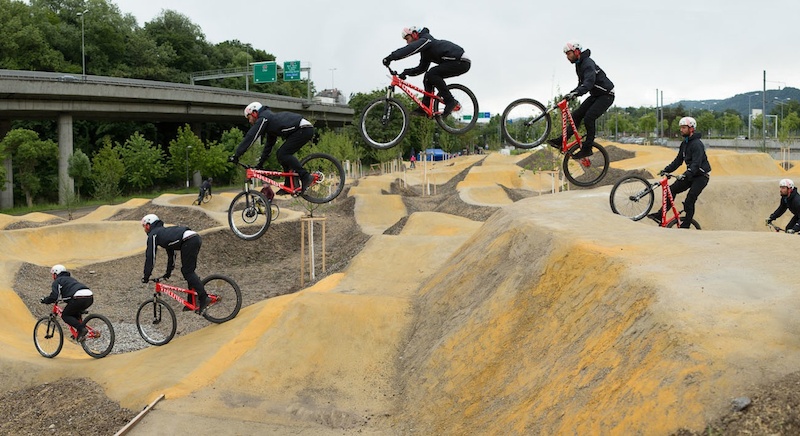 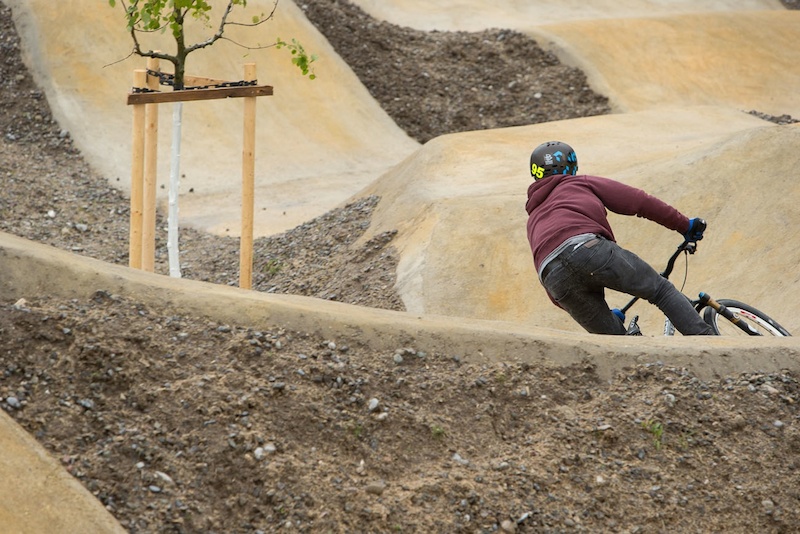 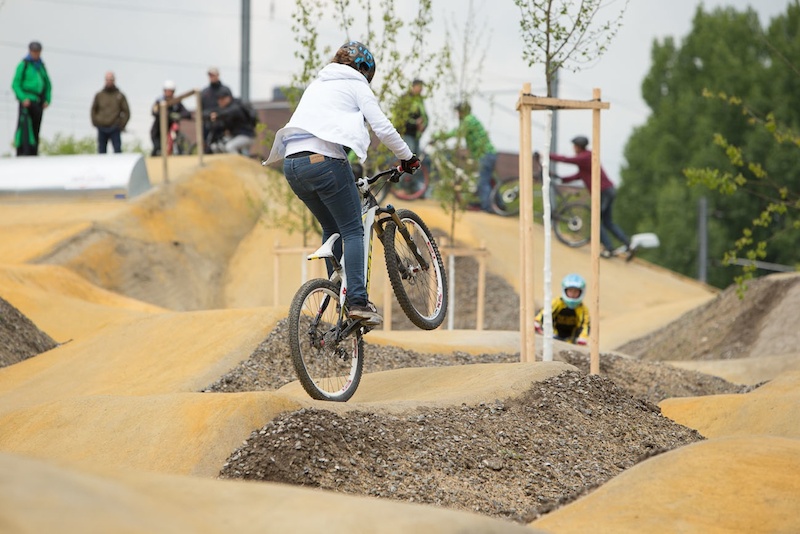 One day later, the park was flooded with hundreds of kids that had just as much fun as the pros from Gstaad-Scott and Scott Voltage! 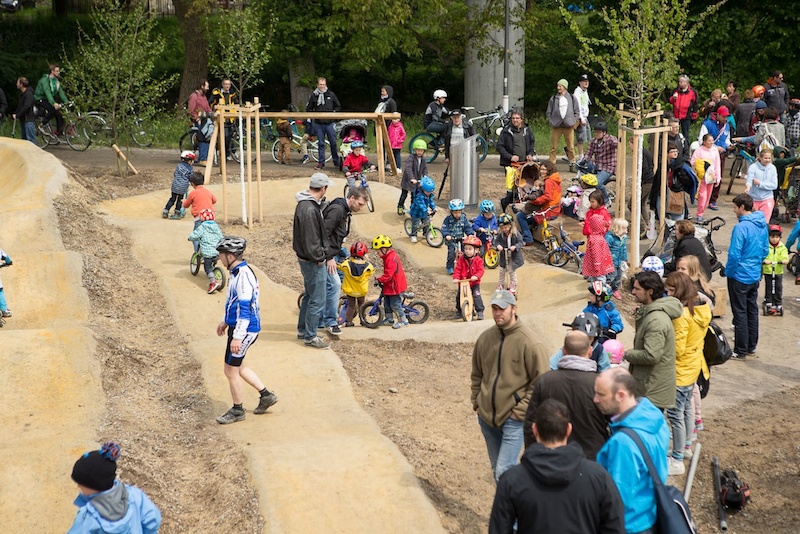 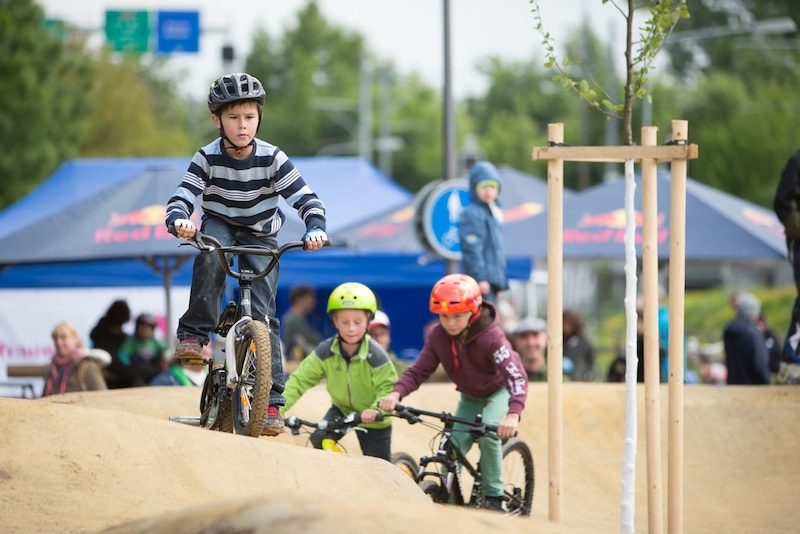 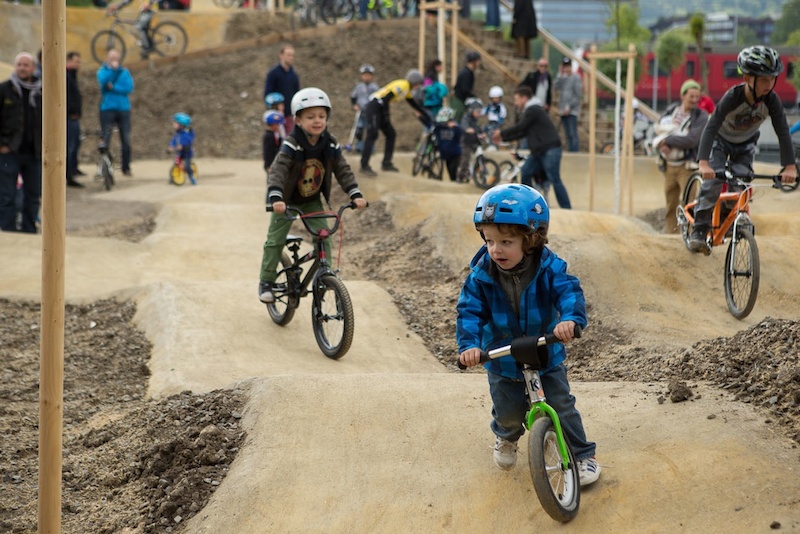 Big thanks to Brendan Fairclough, Noel Niederberger, Felix Klee, Floriane Pugin and Emilie Siegenthaler for giving it all on the Velosolutions pumptracks all week long! It's time for a break before we leave for Scotland, for the BDS round in Innerleithen and the first World Cup 2013 in Fort William.

Stay with us for all the racing news on www.facebook.com/gstaadscott and on Twitter @gstaad_scott!

Who knows, if we find enough towns who let us build Pumptracks, the Tour de Pump can go world wide in the future?

RodRamsey (May 26, 2013 at 17:27) (Below Threshold)
Scooter kids get the hell out the way fooo! Ok you guys win best pump tracks in world etc hurray for you. We building one here in NYC with a secret list of pros so you not only ones getting busy. Since pink not reporting on the Plattekill GRT heres the results. Neko Mullaly 1st place Macdonald- bulldog took 2nd. Big props to anyone who camped thru last 6 days of hell on the mtn. 4-6" snow this a.m. For racers to deal with. Usually 70 degress this time of year like it was last weekend. Hopefully this race gets some coverage. I know we on the scary east coast and all. Most reporters frozen inside tents all week lol. Gwin another no show = punk, maybe he make it for windham.

RodRamsey (May 26, 2013 at 18:09)
I was talking about those extreme scooter kids that always causing pile ups in skateparks. Kids on scootbikes always a great sight and I would wait ten minutes for he/she to clear the track. Here in nyc theres a million annoying razor scooter tards running into everyone.

matthewreeves13 (May 26, 2013 at 18:09)
yeah and they don't scooter the stuff you do on your downhill either. They could easily get a 200-300 dollar BMX instead of a $600 scooter like the kids i'm always getting snaked by whenever I decide I want to ride a little park. And @ jimmything, Scooter kids aren't just in Europe. (unfortunately)

otiotori (May 26, 2013 at 4:12)
it can't be that hard to chuck one in. One tenth of the money from mykey would make a more efficient pump track around the city than our train system .

si618 (May 26, 2013 at 4:20)
Land next to train lines seems to be available for this kind of thing. There's a skate park in Adelaide next to the main city train station. If you want a pump track on public land I guess to have to get local council on board, or go private and build it yourself.

Sillybanshee (May 26, 2013 at 10:46)
You're all lucky you don't live in Midwest America. Here in the northern suburbs of Chicago we don't have anything as good. Most skate parks are only for skate boards, scooters, and roller blades. Bikes here are a huge risk to park districts and other recreation programs.

With some headway we are seeing more parks, but nothing at the scale where we see coverage or featured in Pinkbike. Just the DH/FR parks on the East Coast and some others out in the Rockies.

dirtman04 (May 26, 2013 at 19:53)
when did pumptracks start being built everywhere like this?! its awesome but it just seems so random. i want to go there so bad

dmrrider95 (May 26, 2013 at 6:26)
Reading these comments makes me feel lucky I live here. The council recently built 2 pump tracks in the area. They're nothing like this but it's nice to know that the council cares about cycling.

rhiwfawrdirt (May 26, 2013 at 8:36)
The British councils seem to be getting on the hole pump track seen, great to see it

psyickphuk (May 26, 2013 at 12:47)
For sure, there are quite a few near me now - I dunno what the initiative is or whether it is EU funding or something but is good to see them realising that you can create a lot of fun with a little bit of space, some concrete and a few weeks with digger.

compulsivebikewasher (May 26, 2013 at 3:06)
Really annoying watching this. Makes me realize I will never see something like this here in Brazil.

The pump track at the bottom of our garden is nearly finished, it's around 60 metres in length with 9 rollers and 3 berms. I won't lie, it's a heap of work and will have taken 6-7 months to create by hand, as there was a lot of prep work needed, but if you can get access to machinery it could be done more quickly.

mudmandhbrazil (May 26, 2013 at 5:45)
In Brazil if you want to build a public soccer place you will find tons of sponsors and public and private money. If you show a project like that for bikes people will think you are crazy mad...

mxnate (Jun 9, 2013 at 10:26)
Sorry guys, apparently I'm an internet asshole, I don't understand what its like in Europe and I shouldnt make assumptions, the problem I have is that even here in Canada where we can dig too many people bitch, complain and are lazy.

Its-That-Guy (May 26, 2013 at 16:48)
Cant wait for my local pump track to be finished! Our council were kind enough to give us the spare dirt from there new roading project, lets just say its quite a bit of dirt...

manuesi (May 26, 2013 at 3:03)
on the other side of the road is a huge skatepark. super rad they managed to build something like that in the middle of the city. and there's a mall just behind the pumptrack, where you get food and drinks. it's simply amazing!

otiotori (May 26, 2013 at 3:03)
actually loving these videos, makes me jealous of their awesome tracks though.

faisalfadzil (May 26, 2013 at 5:16)
Malaysia, no pump track, no dirt jumps.... consider ur selves lucky. Our local pumptrack got demolished.

SaintJoeRider (May 26, 2013 at 17:24)
I can just hear it in the Red Bull sales meeting. "Lets throw some money to the park directors and have them build a pump
section for the kiddies so we can get them hooked on our poison at an early age."
Disgusting how such a huge corporate entity, which has a crap product, controls such an awesome sport.

mxnate (May 26, 2013 at 7:29) (Below Threshold)
That's ridiculous, ride til the pavement ends, find some dirt and start digging. Excuses are like A-holes these days, seems like everyone's got one.

jlhenterprises (May 26, 2013 at 8:33)
It is Illegal to dig just about everywhere around here. All state land. We need a place like this in the city, or up in the mountains around town.

leelau (May 26, 2013 at 9:55)
nate =we can get away with that in Canada. In some places (south Germany for example) they get arrested for building in the woods. That's pretty heavy stuff

Lordofdogtown (May 27, 2013 at 10:30)
Also here in Switzerland you will got big troubles if you build in the woods your lines or jumps. Therefore cities and communities build up parks like this one to avid building in the wilderness. We are here a kind of limited by the free space we have, it's not only because the cities want to make a gift for the biking community

Eneite (May 28, 2013 at 11:17)
@mxnate :
I built a lot of trails and I have to destroy a lot of them too. We had big of troubles with forest guards and administration. It's not because that's like that with you that it had to be the same everywhere. a*shole.