Michal Prokop and Anneke Beerten have won the 4X at Champery, followed by Roger Rinderknecht and Joost Wichman in the men's, and Fionn Griffiths and Celine Gros in the women's. 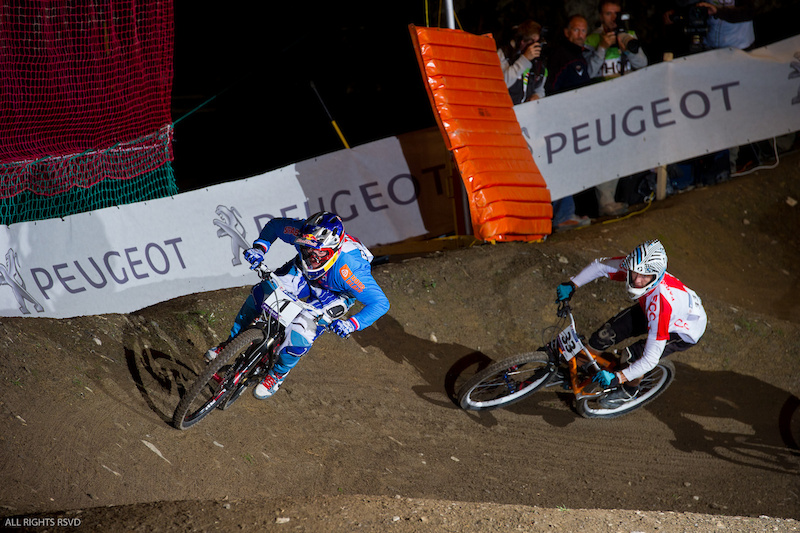 Michal Prokop easily won round one. Not so the final--he was the first out the tangle that happened in the first turn and had not only crooked handlebars, but a broken shifter. One gear for the win. 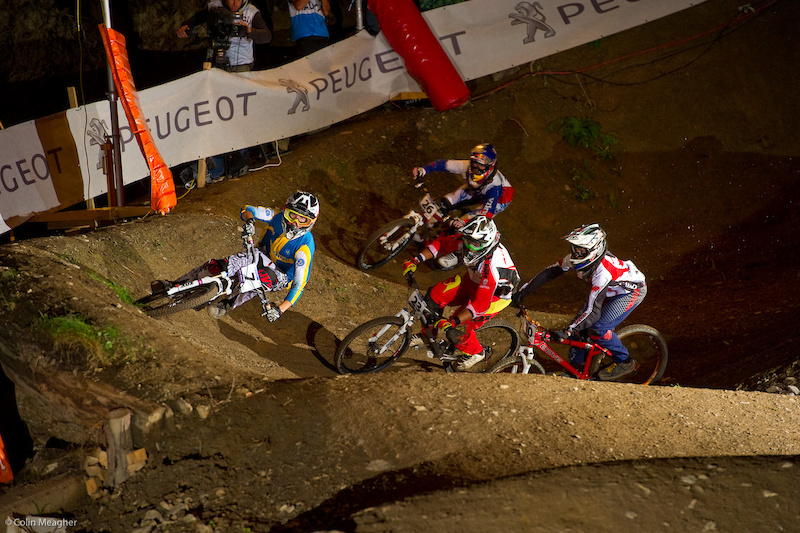 Felix Beckman took this early round, but again, he's not strong enough to face the giants of the sport. 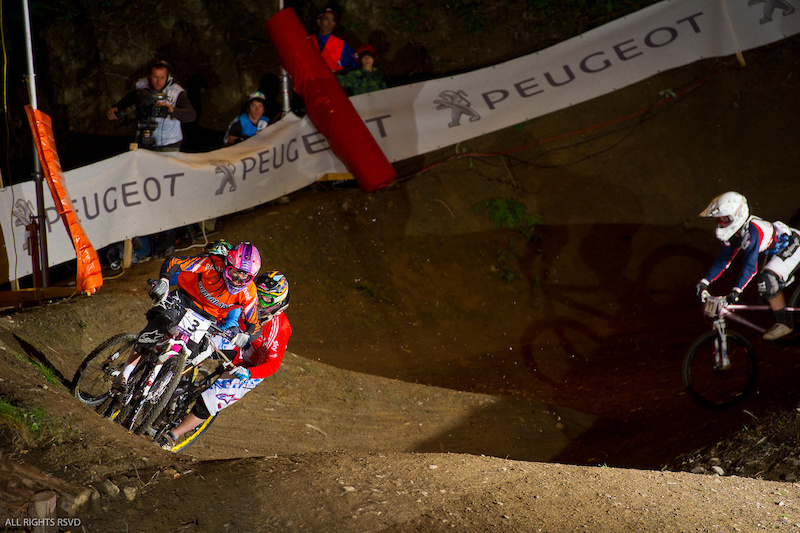 Anneke Beerten easily took the early rounds. To finally take a World Championship title was magic for her. 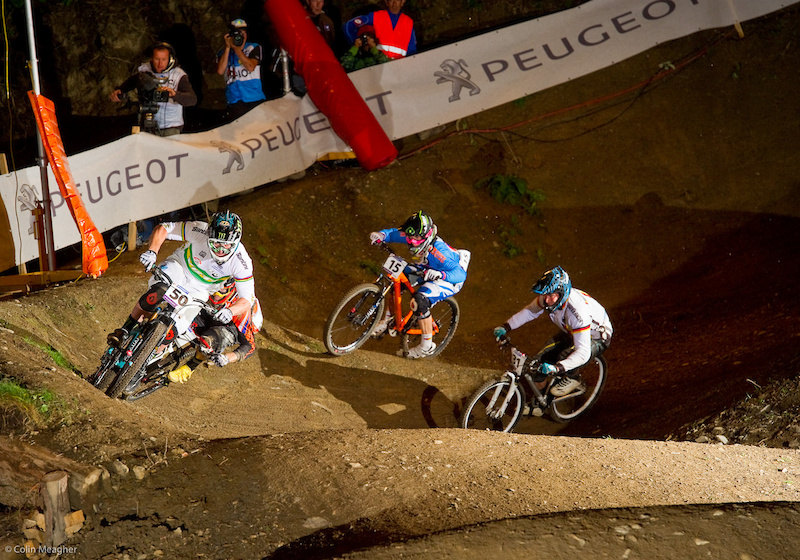 Graves was solid early on, but in the big final a collision and a front flat sealed his fate. 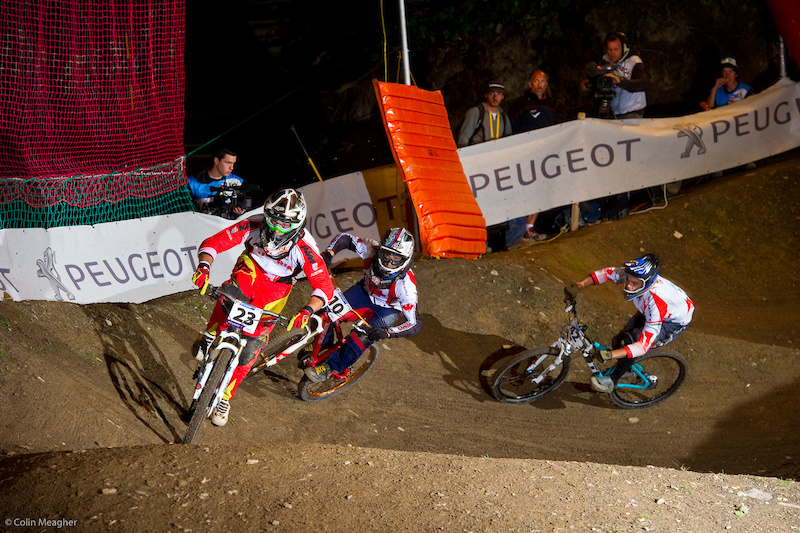 Hannes Slavik--no relation to Tomas Slavik--easily won the first round, and advanced the next, but it's hard to edge out horsepower like Graves, Wichman, etc. 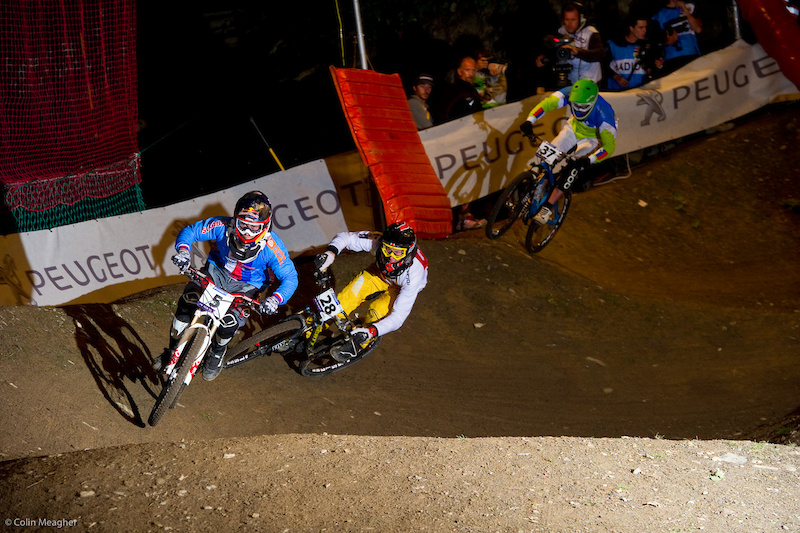 Michal Marosi made some big moves early on, using his DH and Freeriding skills to take advantage of some of the other lines on the track. Eventually Quentin Derbier took him out in the last corner in the 1/4 final. 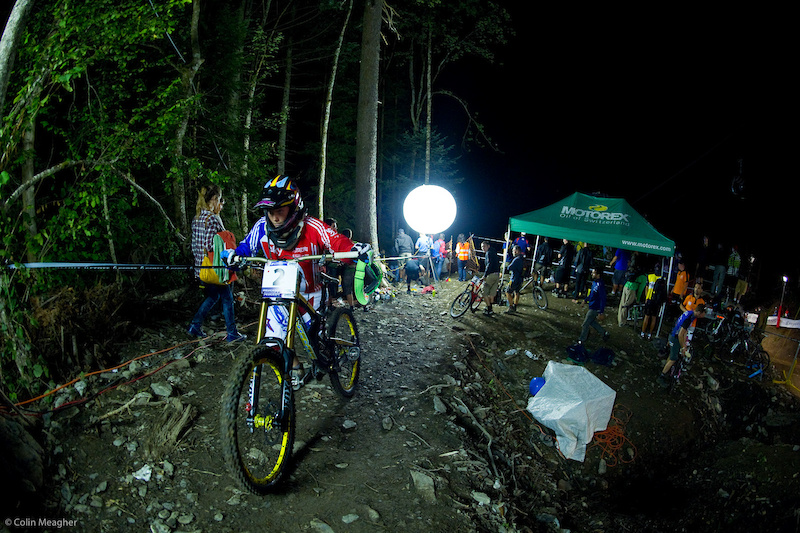 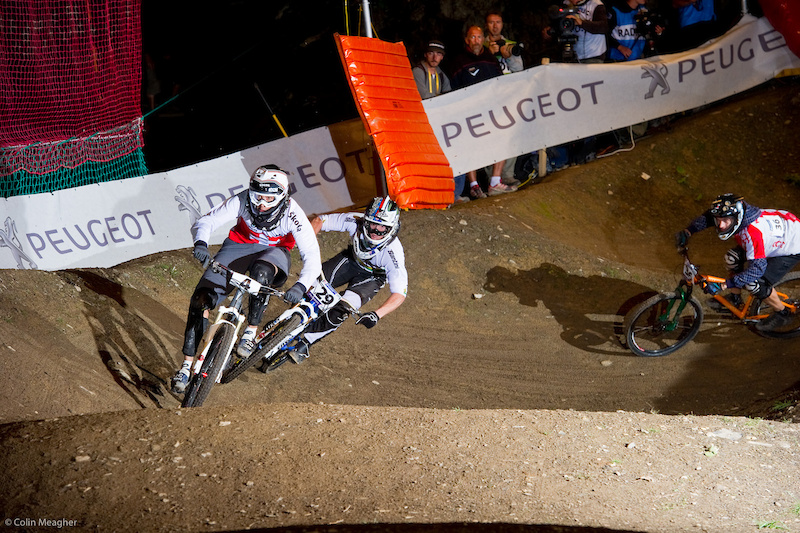 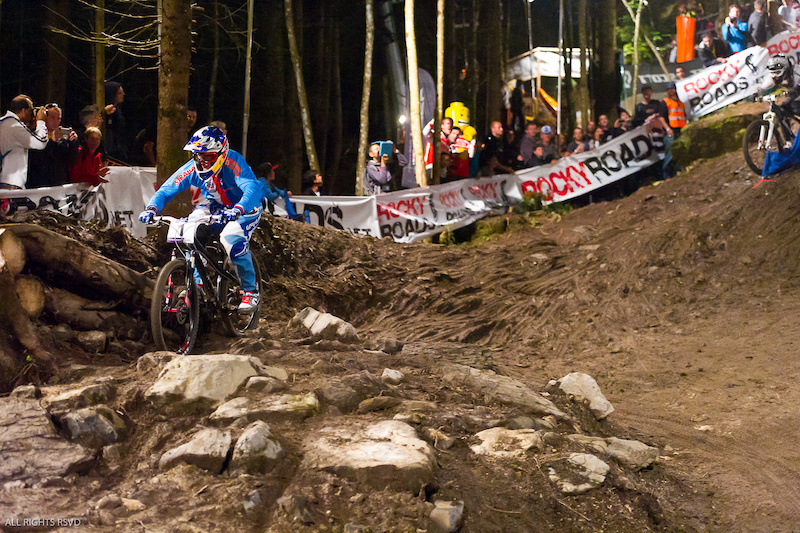 Prokop was beyond stoked to get the win after being in the pile up in the finals. 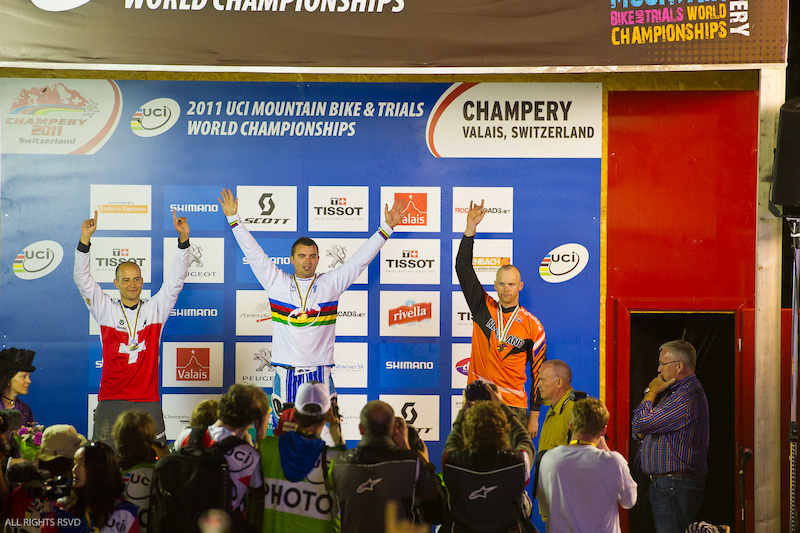 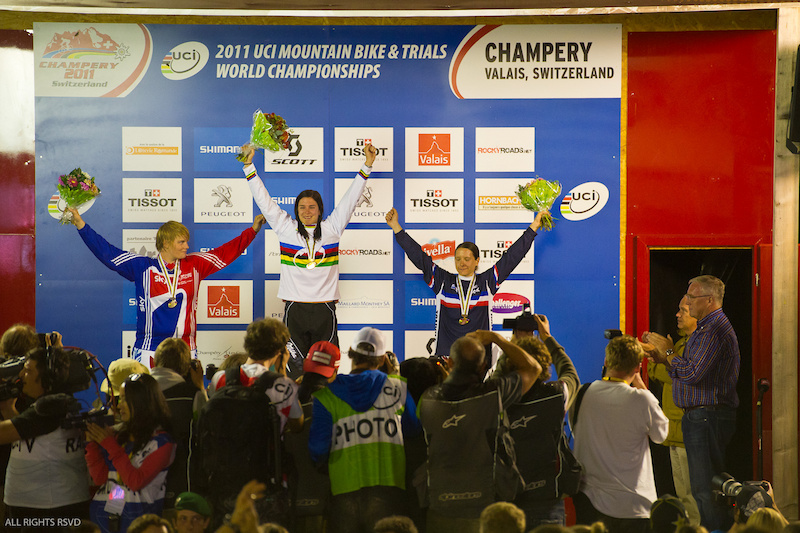 In what has to be one of the craziest finals I've ever seen Michal Prokop has taken the win in the 2011 World Championship 4X. Joost Wichman was first out of the gate but went down in the first corner taking out everyone except for Graves. Graves however he rear flatted while riding over Roger Rinderknecht's fallen bike and went down moments later. Prokop was first back on the bike followed by Roger Rinderknecht and Joost Wichman, while Jared Graves was forced to walk down the track in the last 4X of his career.

In the Women's final Anneke Beerten got the holeshot and lead all the way to take her first ever World Championships title while Fionn Griffiths rolled to 2nd place on a full blown DH bike. That really says a lot about the track, while she struggled a tiny bit at the start gate the bigger bike allowed her to easily roll faster through the greasy rock sections that were a lot more trouble for the riders on hard tails and short travel bikes. Celine Gros took third and Melissa Buhl 4th.

The track was more than a bit greasy due to rain, especially on the rock sections, and there were numerous crashes because of it. The course builders tried to create a track that had room for more than one line, and while in the early rounds it was all about one line as the night progressed more and more riders opted for different lines to pass. While many riders that went off line crashed in the greasy mud several did manage to pass, most notably Quentin Derbier in the men's small final. Most riders chose to ride hard tails except Fischbach, Polc, Tschugg and a few others.

Here's a brief play by play of how it went down.

1/16 Michal Prokop all the way

4/16 Beaumont went wide in his first heat trying to catch Pesko but crashed and took out Blake Carney. Beaumont was first to his feet and moved on to the next round.

6/16 Quentin Derbier made a mistake midway through his first run and almost went off course, going from 1st to 3rd. However he somehow managed to make it back up and finished second to move on to the second round.

7/16 Marosi had a few super loose moments in his first round, drifting almost sideways in the mud but still won the round.

10/16 Graves flatted in qualifying but managed to easily pull off a win in the first round.

1/8 The first heat of round two featured three past world champions and Slavik took it away from Prokop in an intense battle, Alvarez had to settle for an incredibly close third

2/8 Beaumont squeezed out as Fishbach took an easy win over Pesko as they both advanced.

4/8 saw a big crash as Michael Mechura went down in the first corner taking out 2 other riders, one of whom hit him hard in the head, creating a short course hold while medics tended to him. Marosi easily moved on.

5/8 Graves came out from lane 1 with an incredible start cutting across Wichman to take it.

7/8 Tatarkovic then Lukas Mechura as Bruckner went down hard with a nasty endo in the rocks and mud.

8/8 Mudd and Tschugg advanced, giving us a good glimpse of Graeme Mudd's abilities. Will he be the Aussie replacement for Graves when he retires from 4X at the end of this event?

1/4 Melissa Buhl taking an easy win out of the start.

2/4 nothing exciting, Gros and Marth rolling through…

3/4 Fionn Griffiths racing on her Intense M9 takes the holeshot against Jana Horakova and then leads all the way easily. Is the DH bike that much of an advantage?

4/4 Anneke has never won a World Championships but she easily won the first round of the women's.

1/4 Michal Prokop, Johannes Fischbach and Marek Pesko and Tomas Slavik. Prokop takes the holeshot and Slavik into 3rd which created an intense battle between back and forth between Fischback and Slavik that didn't end until Slavik missed a gate near the end. Prokop took the win with Fischbach second.

2/4 Rindernecht gets the holeshot out of the gate then Marosi takes the big gap line on the left to move into second. He holds it all the way down but Derbier takes him in the last corner. Rinderknecht wins the round and he and Derbier move on.

4/4 Another huge round, Tatarkovic takes the snap but goes down in the first corner and takes out Mudd with him. Lukas Mechura takes the lead with Guido Tschugg in close second and they move on.

1/2 Buhl takes it out of the start while Steffi Marth moves into 2nd early on but loses it in the bottom when she fails to make the double. Gros moves on to the final with Buhl.

2/2 Anneke takes the holeshot and she leads all the way down although Fionn fights to pass all the way. Amazing to see Fionn doing so well on a full blown DH bike, really says something about the course.

1/2 This could be a final, Prokop with the gate then Rinderknecht. Fischbach going for it big time but crashes out while Rinderknecht and Derbier fight it out, but Rinderknecht holds on and moves to the final with Prokop.

2/2 Another huge heat, Graves goes for it but Joost Wichman takes the gate and leads all the way through. Fischbach crashes hard and Joost and Graves move on to the final.

Small Final - Horakova takes the start, Marth goes down in the first corner taking out Tereza Votavova, and Neven Steinmetz ends up 2nd.

Final - What a line up, Gros, Beerten, Griffiths and Buhl. Beerten gets the snap out of the gate, Buhl in 2nd but can't hold it, Griffiths has a slower start but rolls fast on the big dh bike. She can't take Beerten though as Anneke wins her first ever World Championships. Fionn 2nd, Gros in 3rd and Buhl in 4th.

Small Final - Mechura, Tschugg, Fischbach and Derbier, a stacked line in the small final. Fischback with the hole shot, Tschugg in 2nd but Derbier takes the big line on the right and moves up, Tschugg charging hard but can't get it back. Fischbach then Derbier then Tschugg.

Final - Wichman, Rinderknecht, Graves and Prokop
Joost Wichman is first out of the gate but he goes down and takes everyone except Graves with him. Graves is the only rider still on his bike but he flats while riding over Rinderknecht's fallen bike right after. Prokop takes it with Rinderknecht 2nd and Wichman 3rd. Graves ends up walking down in 4th...

rydindirty (Sep 2, 2011 at 19:52)
can't wait to see the video. When more than half the field crashes in the first corner it should be restarted imo...

maxnordstrom (Sep 3, 2011 at 1:13)
Anyone else saw Graves cry just before the start? Guess it was a bit emotional to do his last run. My throat went a little thick to..

bunkey (Sep 2, 2011 at 19:44)
Massive lol at the racist who pushed the sponsor board across to hide the black man from camera when Prokop was being interviewed. Unintentional? Maybe. Hilarious? Definitely!

jumphilo (Sep 2, 2011 at 19:54)
Gutted for graves but it was the craziest final and the track is just giving no mercy to anyone... Good to see Prokop back on top. Graves is back on DH bike full time going to be interesting

Champion from the Czech Republik

nouser (Sep 3, 2011 at 1:22)
I heard Graves is moving to DH and is going to focus on that watch out Gwin,Hill,Athertons,Minnar,Peaty ect.