Join Pinkbike  Login
140 Comments
The Pietermaritzburg World Cup round kicks off the season earlier than ever before, meaning that many teams are working hard to get their race bikes sorted and delivered to the South African venue in time. Yeti are one of a few teams who are debuting a new machine at the first stop of the season, although they seem to have gone about it in a much quieter manner than most of the competition - no press releases, no secretive videos or blanked out photos, and no build-up. Instead, just a few simple photos were posted to the Yeti Facebook page that showed team riders Jared Graves, Richie Rude, and Eliot Jackson, along with Yeti videographer John Reynolds, all looking pretty chuffed about the new carbon frame in front of them. 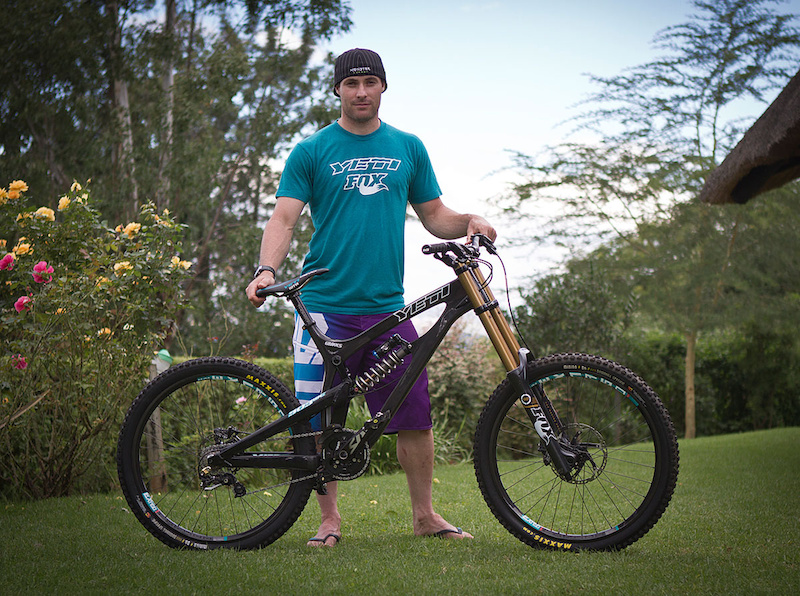 The 303wc Carbon pictured in front of Graves is just one of two in existence at this point (with the other at Yeti's Colorado headquarters for internal testing), but that's not to say that there might not be others that employ different carbon layups, or even altered frame layouts, that have been built for testing purposes. "The 303wc Carbon frame has been in the works for about 15 months," Yeti's John Pentecost told Pinkbike, "but the basic frame layout and design started almost 3 years ago", meaning that Yeti has likely put a number of different variations though testing.

The big news here is, as the bike's name suggests, its carbon fiber front triangle. The carbon front end features very similar lines to the 'standard' 303wc that the team has been riding, and uses the exact same suspension mounting points and swingarm (not to say that we won't see a carbon swingarm in the future), meaning that the new bike features the same 8.25'' of rear wheel travel as it's aluminum brother. Hidden up against the seat tube is the bike's vertical rail that the swingarm mounted shuttle travels up and down on. While the upper link controls the bike's suspension rate, the vertical rail determines its wheel path. This means that the new 303wc Carbon makes use of the same wheel path as the aluminum version, although Yeti could certainly alter this by simply changing the angle of the rail. 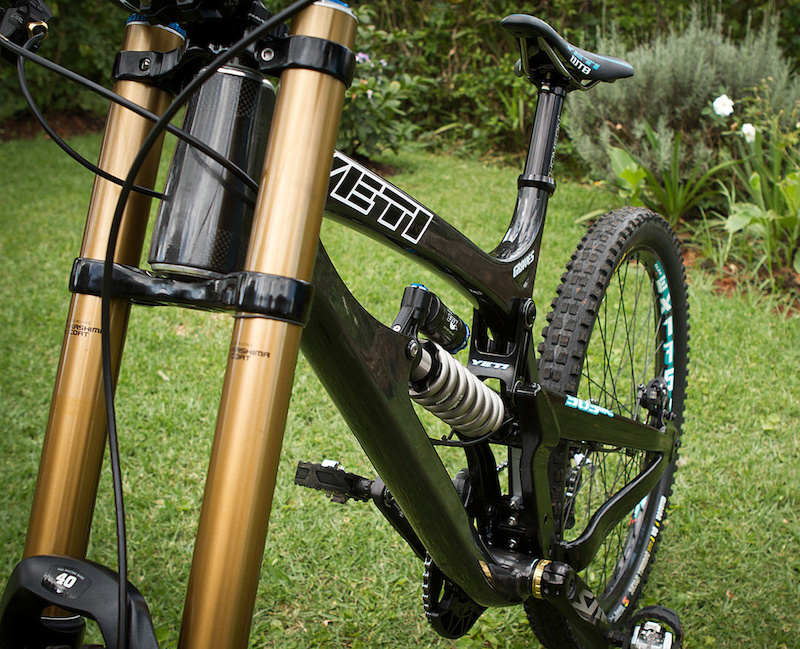 We don't have an exact weight figure to compare to the 9.9lb frame weight of the aluminum version, but it's a safe bet to say that it is likely 1.5 - 2lbs lighter. "You're in the ballpark, but that's as much as I can say," was Pentecost's cagy reply when questioned about the weight savings, "As with all of our bikes, we'll build it as light as possible while still meeting our strength and durability requirements."

Posted In:
Reviews and Tech Yeti

foggeloggliod (Mar 13, 2012 at 16:31) (Below Threshold)
yeah good luck saving for one because they will never be available.

foggeloggliod (Mar 13, 2012 at 16:39) (Below Threshold)
right... just like how people said the remedy brandon semenuk is ridding will be out too. oh and sorry time police^

RaleighVoid (Mar 13, 2012 at 16:47)
its just a prototype. do people not understand this? its in the title damn it. this means they're testing it. if its shit it wont be sold. if its good it will maybe be sold.

stinky-deluxe-smith (Mar 13, 2012 at 17:13)
i think they shouldnt make this a production because this bike would cost alot .. not cause its carbon ect .. but beause every time you see it you'd spunk your pants, :/ you'd need 500 boxers a day .. possibly the nicest bike ever made

robc10 (Mar 13, 2012 at 18:58)
I realy can see carbon frames replacing the current style within the next few years, realy does show how much mtb has progressed within the last decade, its unreal

co-slopestyler (Mar 15, 2012 at 1:10)
Maybe you should try reading the article in its entirety. Production alloy frames, "slatted to ship in the next week"

foggeloggliod (Mar 15, 2012 at 7:08)
Ok dude just read that, but learn to spell before you try to act like a badass by proving a point

samminett (Mar 15, 2012 at 20:18)
@HAnewboy leave this convo before your owned out oh and all you have is internet balls

drfunsocks (Mar 17, 2012 at 2:41)
im not being funny but so what if they dont just mass produce a frame that clearly hasnt been tested properly? its going to cost thousands of pounds, id like to buy somthing thats been tested and proved, i dont just want the first frame they make because is a few grams lighter. i say test things so we the end consumer dont end up flat on our arses with a hole in our wallets

TomWatkins (Mar 13, 2012 at 16:11)
Jared Graves completely dominated 4X, now lets see if he can step it up to the big bikes, bigger jumps, bigger tracks, bigger everything! I wish the man good luck, we know hes got the balls and talent, its just using it in the downhill discipline!

p-romano (Mar 13, 2012 at 21:15)
I have done that same thing to a minion for fast tracks and it rides amazing still because all of your corner traction is still there but rolls so fast.

jaame (Mar 13, 2012 at 21:19)
Graves is a hero. I've seen a few of his interviews and stufff, I think he's among the most interesting and intelligent of the WC level riders. Me, I haven't got time to listen to thickies even if they are world class. I want some banter and opinion in interviews and Graves usually gives some.
How many kg is 30 pounds? 11, 12, 13? That's a serious loss off beef. I hope it goes OK for him this year. I'm sure he'll be killing it when he hits his stride, but I can't see any wins on the horizon. He's been pretty off in the Aussie nationals so far this year hey.
Good luck son. Keep the good interviews coming.

dhfreerider666 (Mar 14, 2012 at 1:05)
wyn is a classic man, very dedicated, hes looking good on the pivot too, good result in oceanias. id be stoked to be as fast as any wc qualifyers

He's still built like a brick shithouse - I'd hate to have seen him with 30lbs more beef on him. No wonder he snapped everyone out of the gate. I know he spent a LOT of time in the squat rack when he was in gated racing.

If there is one course that favours Jared Graves, its PMB.

bobtjustice (Mar 14, 2012 at 14:05)
Graves could shock everyone this season, this guy trains like a machine, and now focusing purely on DH he could potentially win a good few races.

meathooker (Mar 13, 2012 at 18:33)
Hope this one doesn't fail under normal race conditions like the old 2 rail bikes did. Nothing like buying a $3200 "world cup" race bike only to have it sent upon itself, only to have an engineer at yeti talk down to you and tell you it is not a design flaw.

Looks like a fun bike but after ^^^ that happened I sold the (3) yeti frames I bought new that year.

kidkazoo (Mar 13, 2012 at 22:16)
this "direct drive" style pivot system is so so popular.seeing more and more bike manufacturers move in this direction.Looks like a solid bike though.cleancut and ready for anything...love it.

DHBIGHITTER (Mar 14, 2012 at 7:48)
whoa! Looks hotter than the servers at HOOTERS! haha - even if i sell all my bikes (plus my car), i still couldn't afford to get one yeti's carbon frames when it comes out! LOL

drbelleville (Mar 14, 2012 at 4:50)
Really nice to see Yeti go the Carbon DH route, as it seems to be working well for all others. Hope they (Yeti and Team) have a great year.

How fit must he be now?

This season is going to be INSANE. Sunday come already!!!

,thats so beefy and just perfect looking ,whats the price tag on that baby?

airsoftesneeto (Mar 13, 2012 at 16:24)
so graves is the only one who gets the carbon version? if i were his teammates i would be pretty pissed

I do agree with you though. That thing is B E A Utiful!