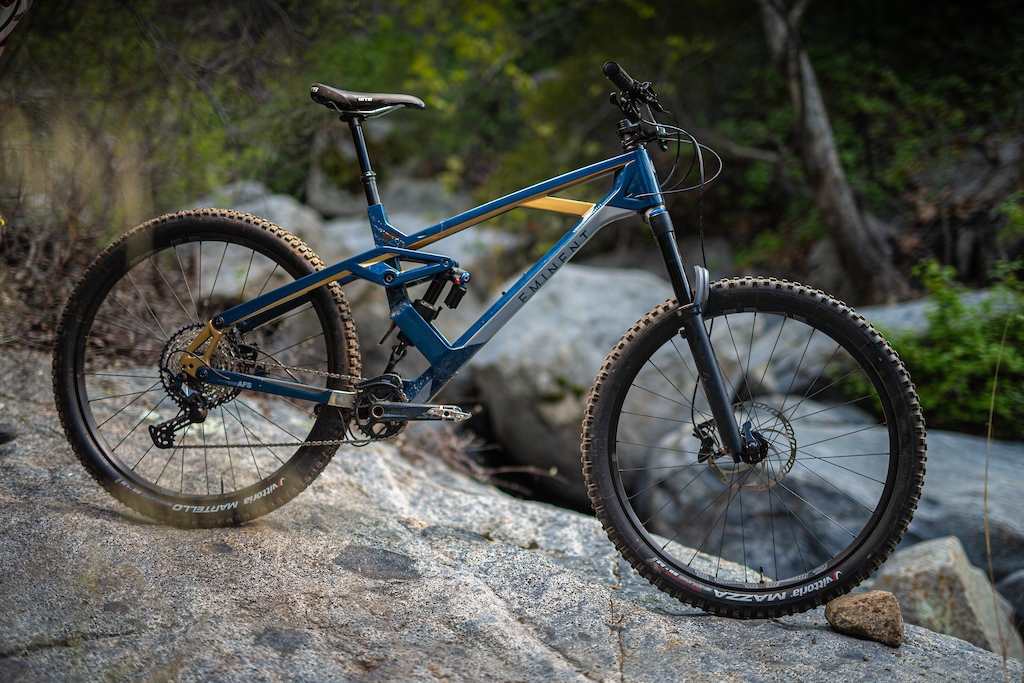 The Onset MT is a 155mm travel 29er and will actually take the place of the Haste. That 155mm of rear travel is being paired with a 160mm fork, and it's entirely possible to run a 170mm if you want some more party up front.

The geometry was also matched to the harder charging nature that the increased travel defined. Eminent increased the headset recess in the frame allowing them to run a -1 degree headset which brings the head angle to 64.5-degrees. There's an addition of an XL size with 488mm reach, and all the Onset MTs benefit from internal dropper post routing. 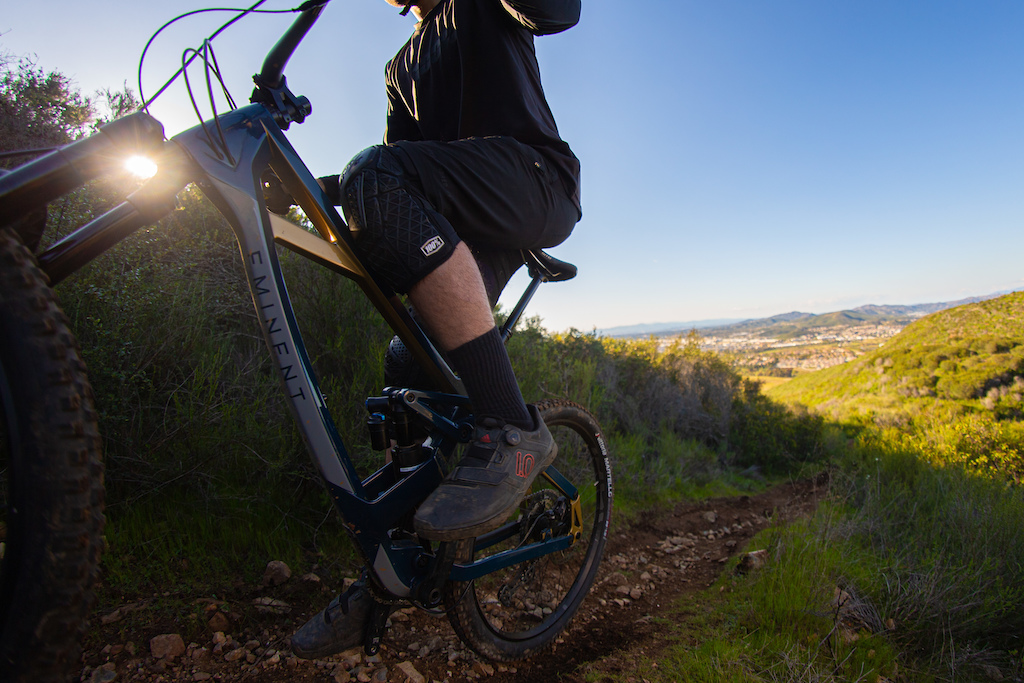 Eminent use their AFS, or Active Float System for the bike's suspension, which some people might recognise as similar to the old Yetis and Rotecs. Some examples of this layout suffered greatly with stiffness issues, but Eminent report that this wasn't the case with the Onset bikes. Nevertheless, they say they've upped the rear end lateral stiffness on the Onset MT by 11% by altering the layup in the chain stay.

The AFS system also uses a floating shock, connected to only the long upper rocker link and chain stay with a shock extender to help bridge the gap. There's a floating brake bracket too, which slides back and forth as the suspension cycles. 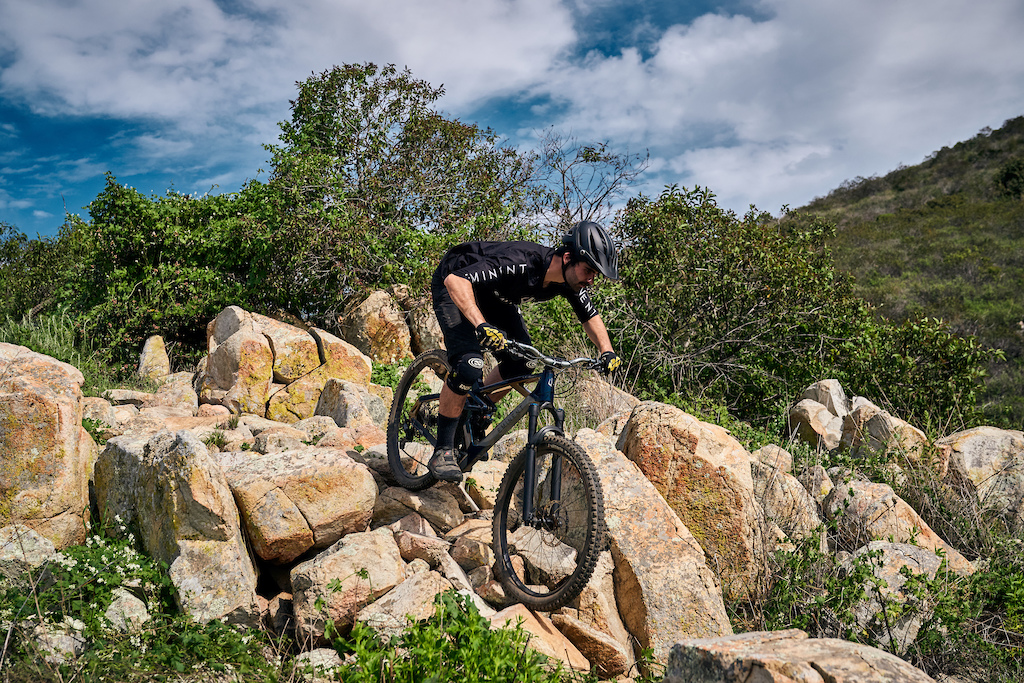 All bikes in the MT line come specced with Shimano four-piston brakes and 12-speed drivetrains, KS dropper posts, and e*thirteen wheels clad in Vittoria tyres. Depending on model there will be options with the Fox 36 Rhythm or the 38 Grip 2 fork and either the new DPX2 or X2 shocks.

There's also the addition of a limited edition blue and gold colourway, as well as the currently available grey and orange one.

Full details, specs and pricing will be released on the Eminent website on the 30th April.

Ryan2949 (Apr 15, 2020 at 7:52)
@ibishreddin: I remember them all being highly discounted on JensonUSA. Among the likes of Niner and Evil. I don't usually see brands that need to discount their bikes to get rid of them as a good thing.

slimjimihendrix (Apr 15, 2020 at 9:25)
Jenson do the discounts. Usually (always?) it’s against the terms of their contract but they know they won’t be sued. That’s why Niner isn’t sold through them anymore. @Ryan2949:

islandforlife (Apr 15, 2020 at 9:30)
What are you talking about... didn't you read the release... "all the Onset MTs benefit from internal dropper post routing"! This frame is cutting edge!

They are running headset angle reducers to make the bike seem modern because they can't redo the molds.

An 11% increase in stiffness? Why didn't you do that to begin with.

A design that other brands have found 'too flexy' is OK because 'trust us - OK'.

thebigheezy (Apr 15, 2020 at 6:57)
Oh pinkbike opinions, you done it again. Real feedback from a real rider that spent a few days on this bike. It's an awesome bike, I had a ton of fun on it and seriously considering this bike. Eminent is doing some cool engineering behind their design and that proof is in the ride quality. I agree, it LOOKS flexy, but this bike was stiffer than several other brands that we all praise, again a testament to the engineering. I can also say, in person, this bike looks sleek and sharp, more so than in pictures. This was my experience and supported by a few other high end riders that were along for the ride and tested it out as well. Keep the armchair test rides coming folks!

gabriel-mission9 (Apr 15, 2020 at 1:32)
Glad someone else sees it. The shock/extender has a pivot in the middle. Absolute madness!

scottzg (Apr 15, 2020 at 0:29)
Lawwill link! I started a thread about this design on MTBR framebuilding forum in 2015. Here was my summary from the responses-

Alright, i appreciate everyone's replies, and this is what i draw from it.

-Traditionally lawwill link bikes had the front pivots more 'opened up' than the pivots near the dropouts, leading to braking weirdness and a negative association when they were available. This isn't an inherent lawwill problem, but a problem with old models that's difficult to get away from and retain good stiffness.

-Since the 'rear triangle' is basically just the dropouts, you can't connect the two sides of the rear triangle. Either you have to seriously over-build the links/stays, or you have a flexy rear end.

-Ultimately, execution is more important than which linkage is used, so a well-executed single pivot or short-link bike can offer a better ride experience and is much easier to design and market.

'Back in the day' I owned a Yeti DH6. It was flogged out and rode like a noodle but OMG the suspension worked so well.

As for this thing......if they mounted the shock more traditionally I'd consider it. As it stands aesthetically its not working for me although I understand they ride really well.

Vindiu (Apr 15, 2020 at 4:26)
Problem here ("opened up front pivots) is the instant cetnre is behind and below the rear axle, and the resulting force centre depends greatly on the orientation of the chain (i.e. which gear the bike is on), aprt from at where in the travel is measured. At a glance it looks like the As curve has to be very steep, starting at a very high high value? Extremely sensible to shock pressure, CoG position (which if you're riding other than like a granma will nevitably move around) and slope.

ohio Plus (Apr 15, 2020 at 10:04)
@Vindiu: instant center is more critical for braking. Virtual center is the one that affects pedaling/accel performance. But you're right to hone in on the IC. Just eyeballing it, this thing has very negative anti-rise under braking, aka rise under braking. (One of the) same problem(s) that plagued the original designs (and some others like the GT LTS/STS). I'd be curious to hear from the reviews just how much this thing stink-bugs and pitches you forward when on the rear brakes.

ohio Plus (Apr 15, 2020 at 10:09)
@Vindiu: Nevermind on my above comment... just went to their site and see that they used a floating brake mount, not mounted directly to the rear bars. Don't know the exact geometry, but that definitely makes it possible for them to achieve their claim of roughly zero anti-rise.

benmoosmann (Apr 15, 2020 at 5:37)
I'm not usually one to call a bike "ugly", but this thing... The angular design seems kinda disproportionate. Also, aesthetics aside, it looks quite flimsy. Like it would be the sort of frame that has quite a lot of undesired flex.

Trudeez (Apr 15, 2020 at 1:43)
Please @vittoria hurry up and make with the Mazza tire. As much as I like the Martell/Mota/Morsa trio I'm jonesing for something new. And please I hope they come in a true 2.5!!

babathehutt (Apr 15, 2020 at 5:43)
I did a quick demo on the Haste and it really rides nicely, super plush rear end. Didn't have any problem with flex, and I'm 210 lbs. Looks weird but why would you want a bike that looks like every other bike?

mountainsofsussex (Apr 15, 2020 at 5:45)
If they were stiffening it up, why did they leave the BB and bottom pivot just floating in the breeze? Maybe connect it to the seat tube? I hate new standards as much as every other commenter on PB, but this thing would probably benefit from some sort of oversized rear axle to tie all those potentially wobbly bits together. The reason short links can be made to work at the front (VPP etc) is that the links themselves are forged lumps, joined side to side. This thing has the hub in the way.

nlibot33 (Apr 15, 2020 at 2:39)
Wow so every company re designs a bike from the ground up, while these guys add a layer of carbon out rear and install an angleset? Oh my I would have thought being quarantined would give you more time to think then that?

fullendurbro (Apr 15, 2020 at 8:45)
Name one existing company that designs every new bike from the ground up. Yeti, Evil, Revel and Santa Cruz use the exact same linkage across their entire offering. Commencal's Enduro/Trail bikes use the exact same linkage. GG literally uses the same bike for everything and swaps out the chain stays. Can you name one company that designs bikes from the ground-up?

nlibot33 (Apr 15, 2020 at 14:31)
@fullendurbro: Yeti SB5.5 to the SB130? Santa Cruz is known for their VPP but look what they did with shock placement, Evil uses the same Delta Link but adds more to reach and HA with the Offering new Nike new frame from scratch, Revel is a brand new company which only came out with one bike wtf, Commencal hasn’t changed their shock placement since the SX launched and what 4 years ago has been the same on their 4 and 4.2, GG is a league of their own by producing a front triangle that can morph to any Power Ranger you want, and to answer your question Inno designed from ground up same with Propain, Kona, Norco, GT, Specialized, Cannondale, and IM pretty sure I left out others that have changed their shock placement and geo

chelagroove (Apr 15, 2020 at 0:32)
That was my first exact thought! That front triangle. The lines of the frame really do pay homage to the Mondraker.

fracasnoxteam (Apr 15, 2020 at 1:52)
Rear triangle is just a little bigger on mondraker. And unified. And shock connected to both links. Well, not a mondraker.

nurseben (Apr 15, 2020 at 8:59)
At some point, will we become numb to the plethora of new bikes coming out that are insignificantly different than the bikes that are already in existence?

bmxrace121 (Apr 15, 2020 at 0:23)
maybe they should give up now. looks tite but can they really compete with other brands? probably nope is my guess. props for the good use of a trust fund. I would ride it if they gave Ep

sickboy13 (Apr 15, 2020 at 20:34)
You just gotta hook up with a demo and ride one for an hour on your favorite trail. It will then become clear...Eminent-used to emphasize the presence of a positive quality.

Rizz420 (Apr 15, 2020 at 11:35)
@gabriel-mission9: how you all judge shit before you ride it is beyond me. Your brain probably cant grasp the physics behind the double pivots at the rear with the sliding brake mount. This dynamic changes your theory. But what i say or what you say doesnt mean shit compared to riding the bike. I demo’d it for a weekend and the bike was nothing short of spectacular. Ride one and then diss it all ya want

gabriel-mission9 (Apr 15, 2020 at 12:13)
@Rizz420: what exactly were you trying to say there? Want to have another go, or shall i just attempt a response at the meaningless word salad you have posted above?