Join Pinkbike  Login
Custom bikes have always been fun projects for us at Nukeproof. Generally, we throw the "rule book" out and can do what we want just as a bit of a thank you to our athletes. All designed by our talented group of in-house product and graphic designers and always executed by the incredible skilled Johnny at Refurb My Bike (his paint shop s local to our offices too). Owen at Slik Graphics also provides the finishing touches with custom decals an all the frames are kindly wrapped by the team at Invisiframe too.

Usually, these frames are inspired by an off the cuff comment from an athlete about something they like which gets our minds thinking how cool that could be! We've always used off the shelf frames for these paint jobs, but with carbon frames now we tend to order raw frames straight from the factory. Despite careful planning and time management, each one ends up in a mad rush to get finished in time (each time it feels like some sort of hot rod / "Fast 'N Loud" style down to the wire "will they won't they finish production"). Grave Digger was almost lost to the Canadian customs system, Barry Sheene's paint was collected on the way down to the EWS in Wicklow, DOD and as for the Ferraris, we crossed Europe in a mad rush to get them to the team on time to build, but I suppose it all adds to the story.

In 2016, we produced this bike for Matti as tribute to his hero growing up. Finnish bike racing legend and 250cc Moto World Champion; Jarno Saarinen (1945-1973). Jarno tragically lost his life in an accident at the Monza race. He was a factory Yamaha rider and rode to glory aboard his custom red, white and blue Yamaha. We took this colour scheme as inspiration for Matti's Mega 275. A couple months earlier we lost a true legend of the sport and Matti's former teammate and friend; Stevie Smith, so there was a tribute to him on the downtube also. 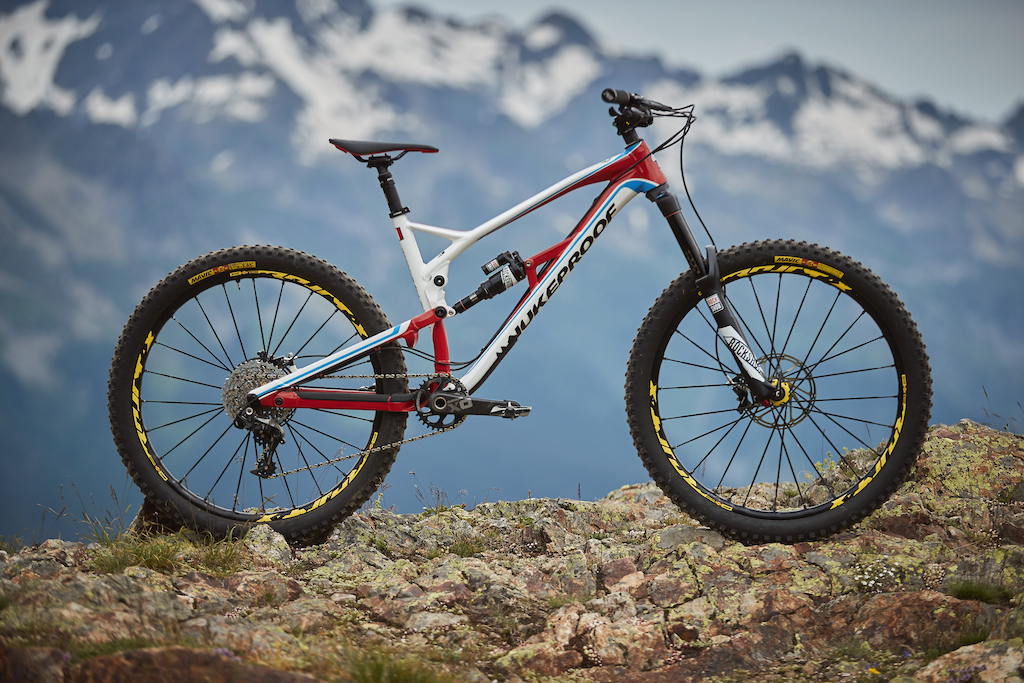 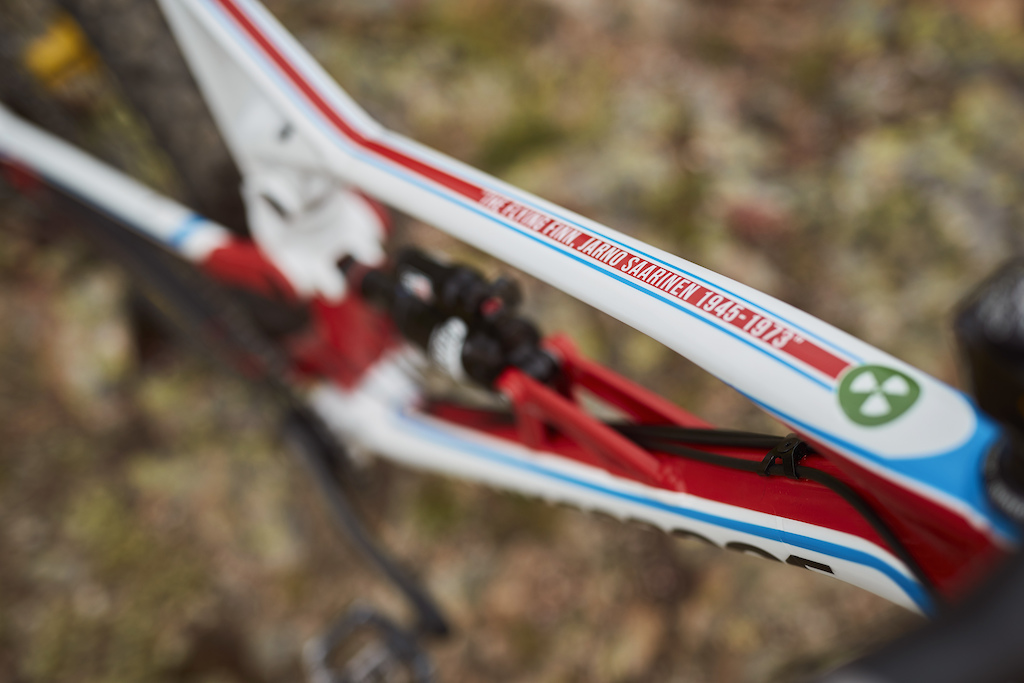 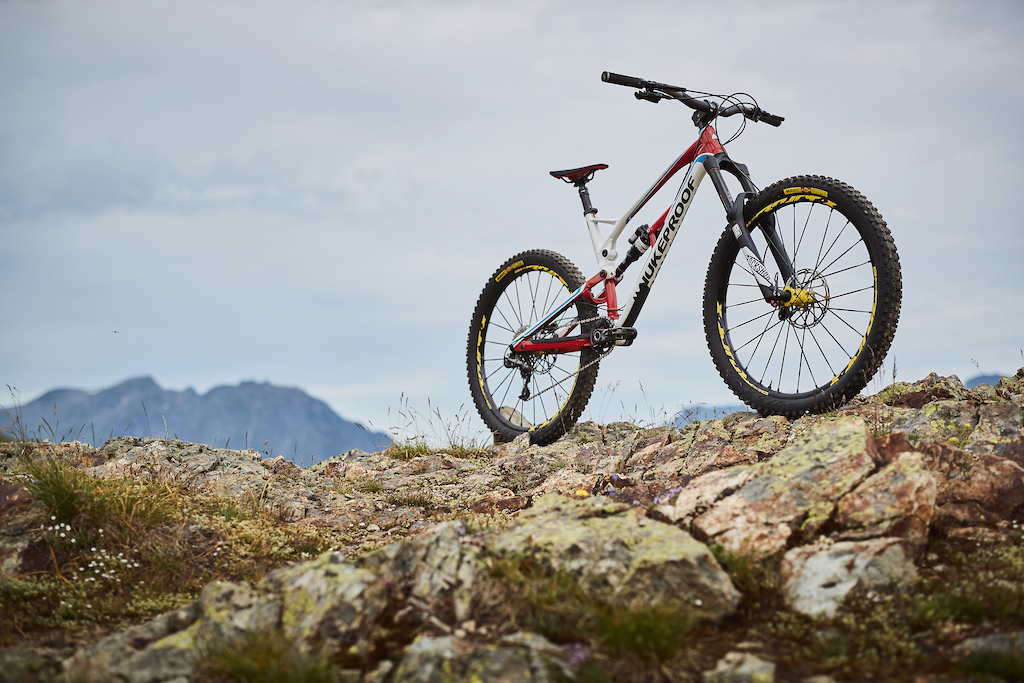 Born from his oldest son's new-found obsession- Grave Digger (the world famous Monster truck conceived in 1982 by Dennis Anderson) and following his dad’s love for all things Green and Purple. The Grave Digger Mega 275 later went on to take Sam's first Enduro World Series win in Valberg 2016. Still one of the biggest projects we have done the frame was airbrushed to perfect with over 60 hours of work going into it. 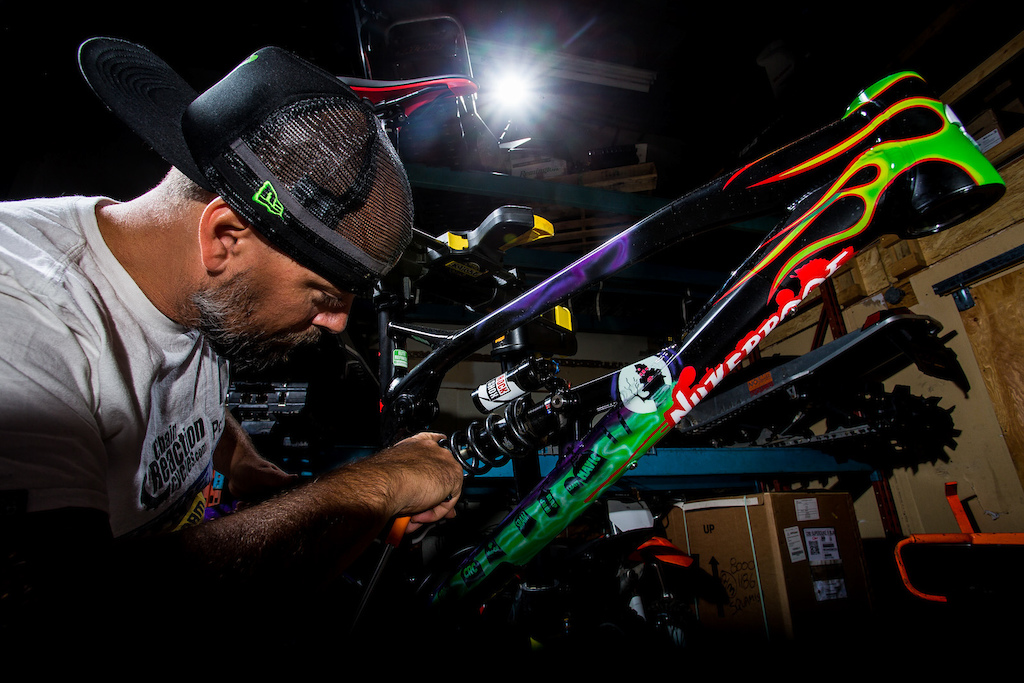 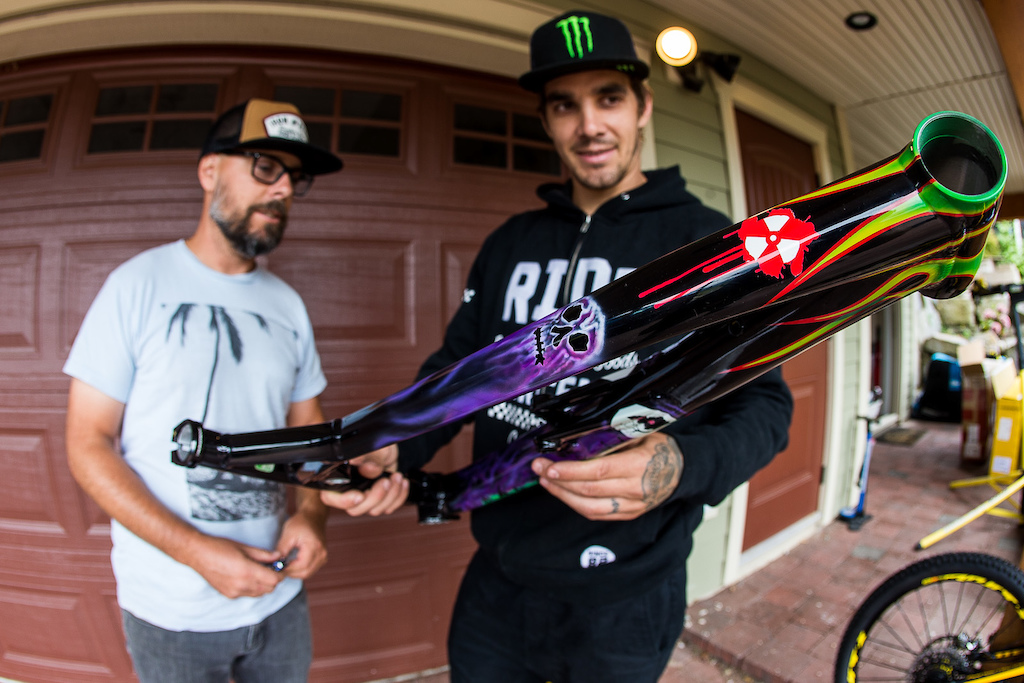 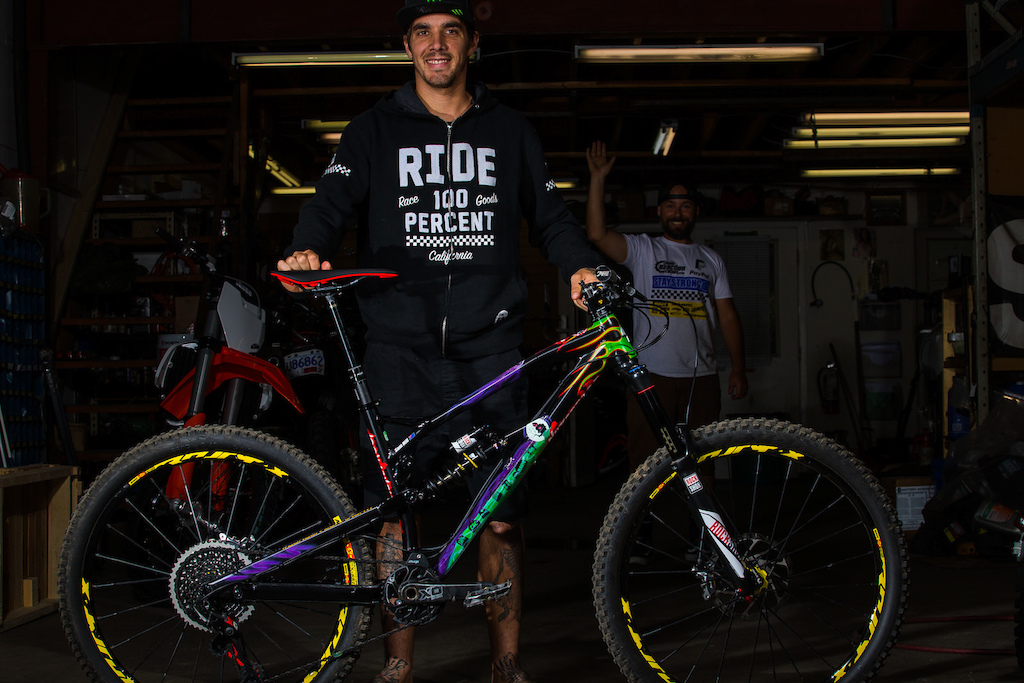 As a youth growing up idolizing two wheels, it's easy to see how an impressionable lad from the North West UK could look up to the legendary Moto GP World Champion Barry Sheene. With No. 7 strapped to his bike, just like his hero, a youthful Nigel Page was shredding the BMX tracks. Again this bike was done as a surprise for Nigel alongside with a full race kit and gold Deemax's form Mavic and custom helmet from 100%. 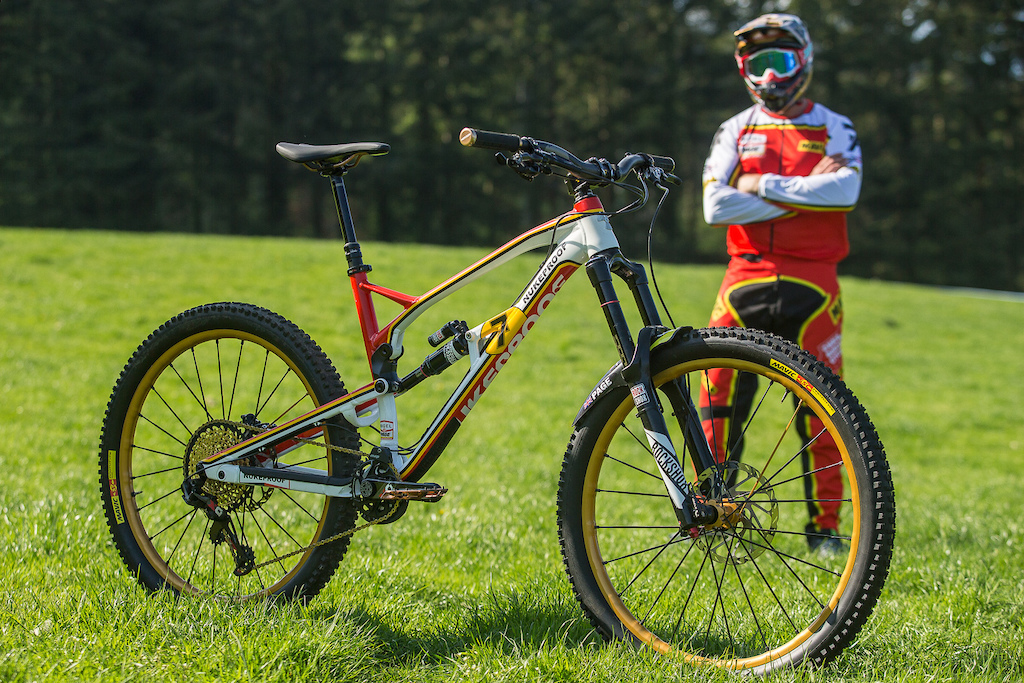 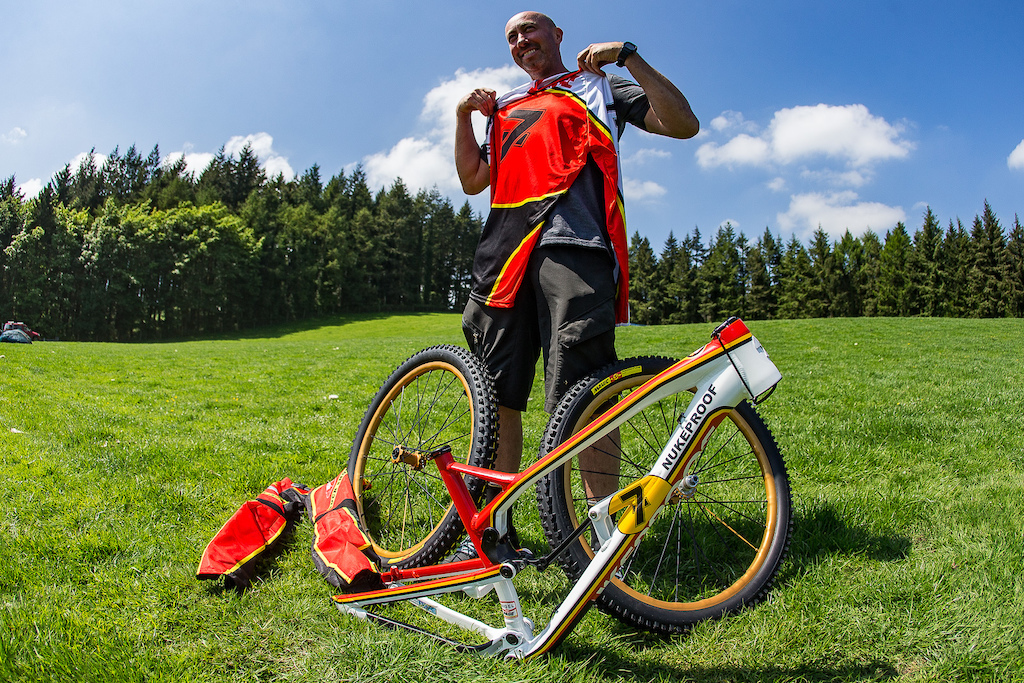 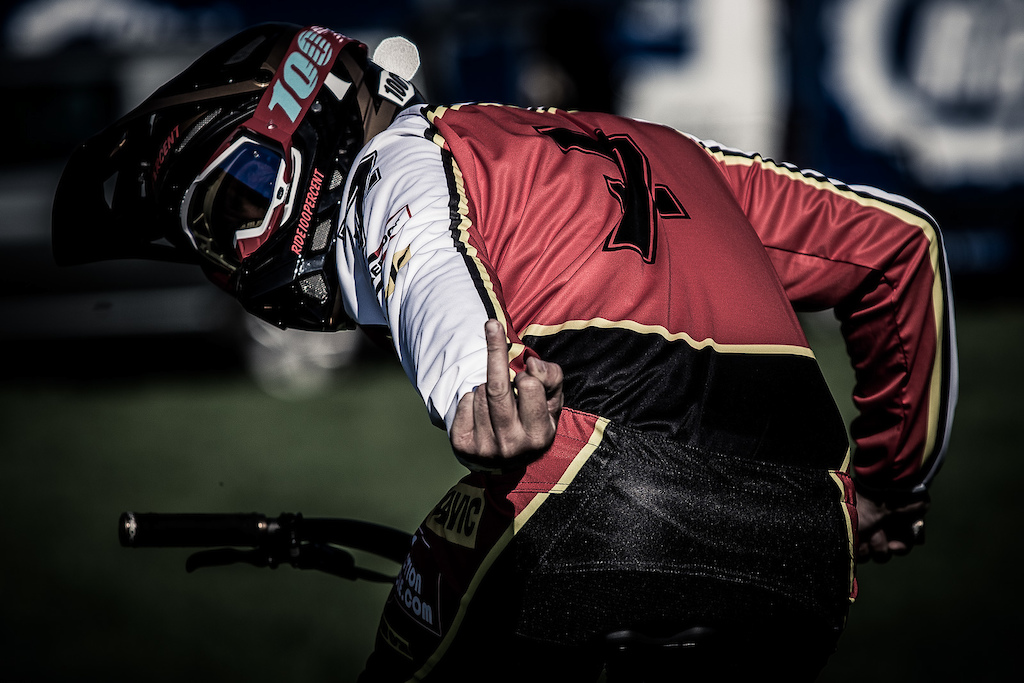 Good vibes from that weekend paid off with a triple podium for the team in EWS Ireland! (Also helped hide the fact that Sam was testing on a new carbon bike that weekend!) 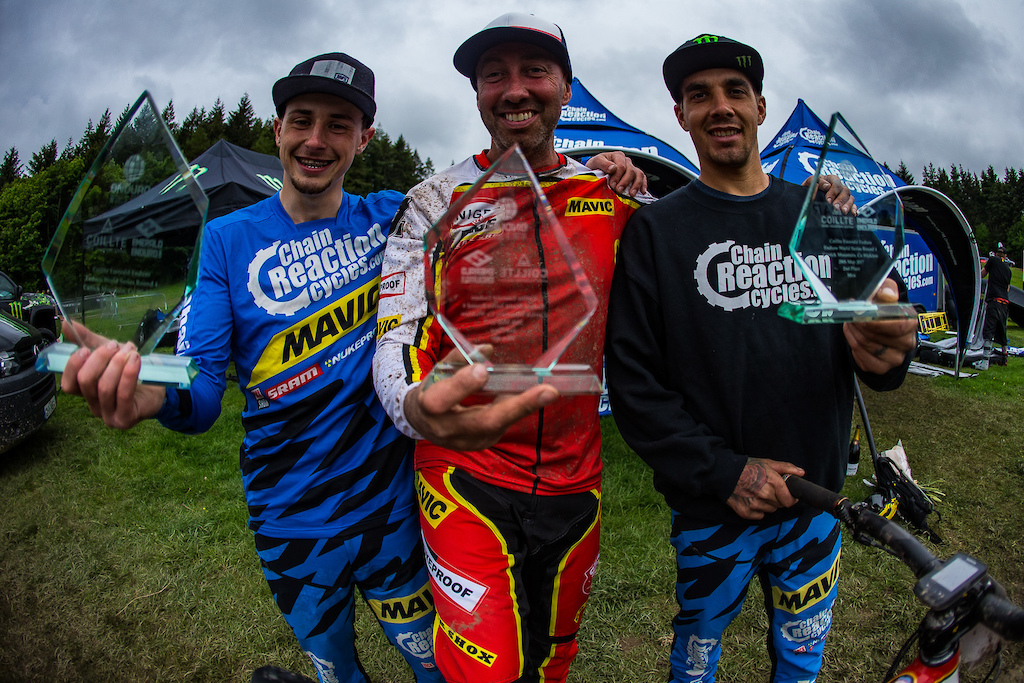 I wouldn't say this is "custom" in the same terms as the other bikes. It was originally planned to be something else (this may appear one day) before it became the bike that Sam used to return to racing Downhill World Championship in Cairns, finishing an incredible 6th and then a couple weeks later use the same frame to take his first Enduro World Series title. This frame is difficult to explain, but Johnny used real gold flake in the paint to have that real special Green 'n Gold look. In the light this bike is insane! 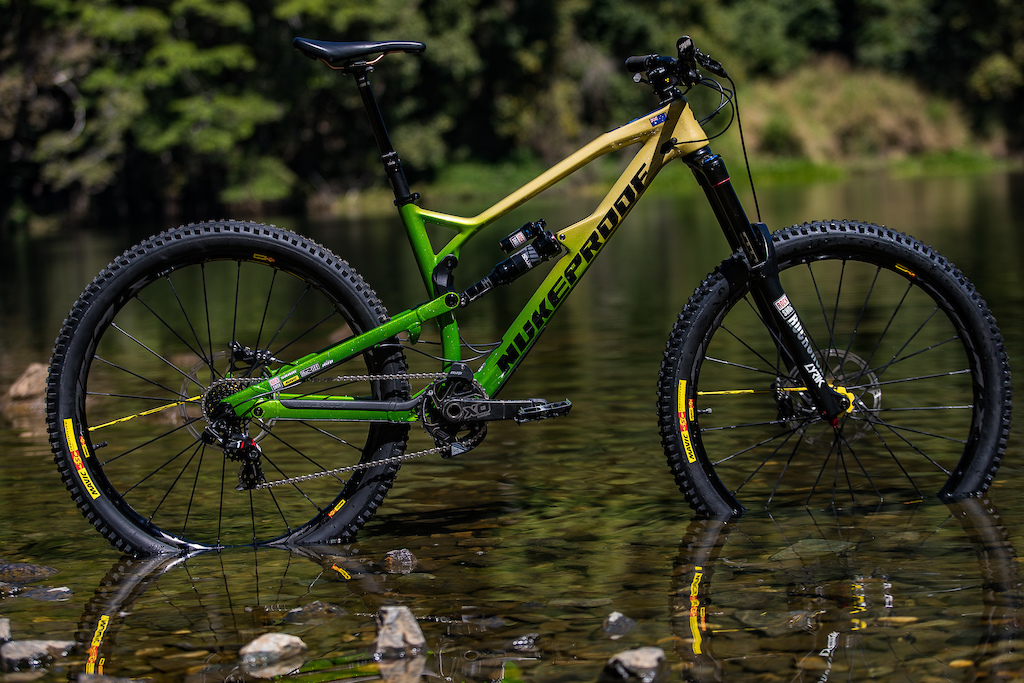 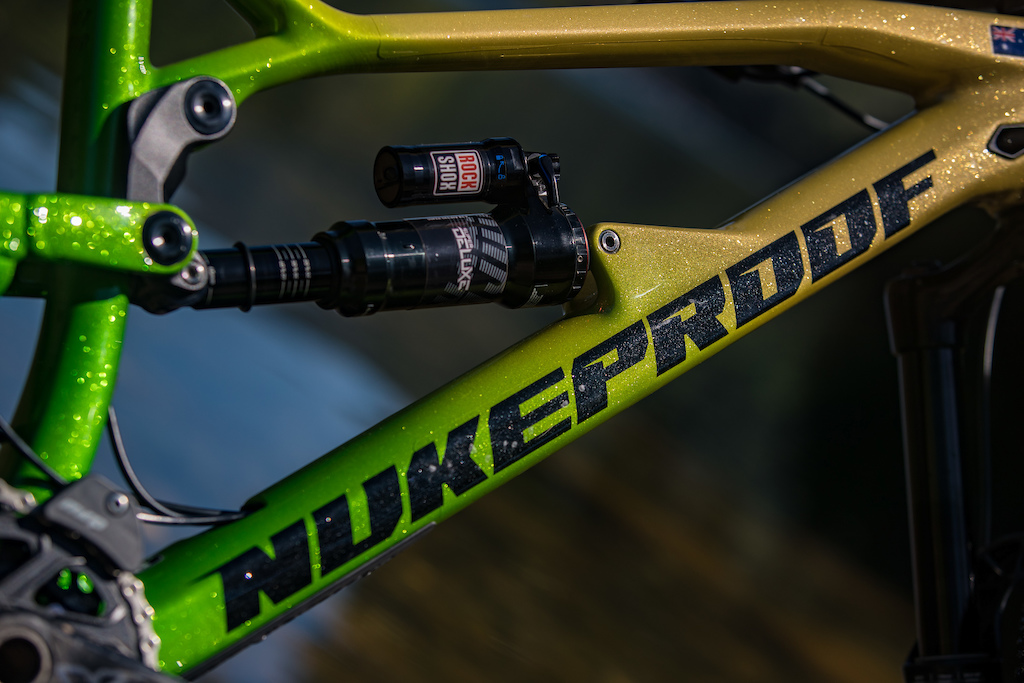 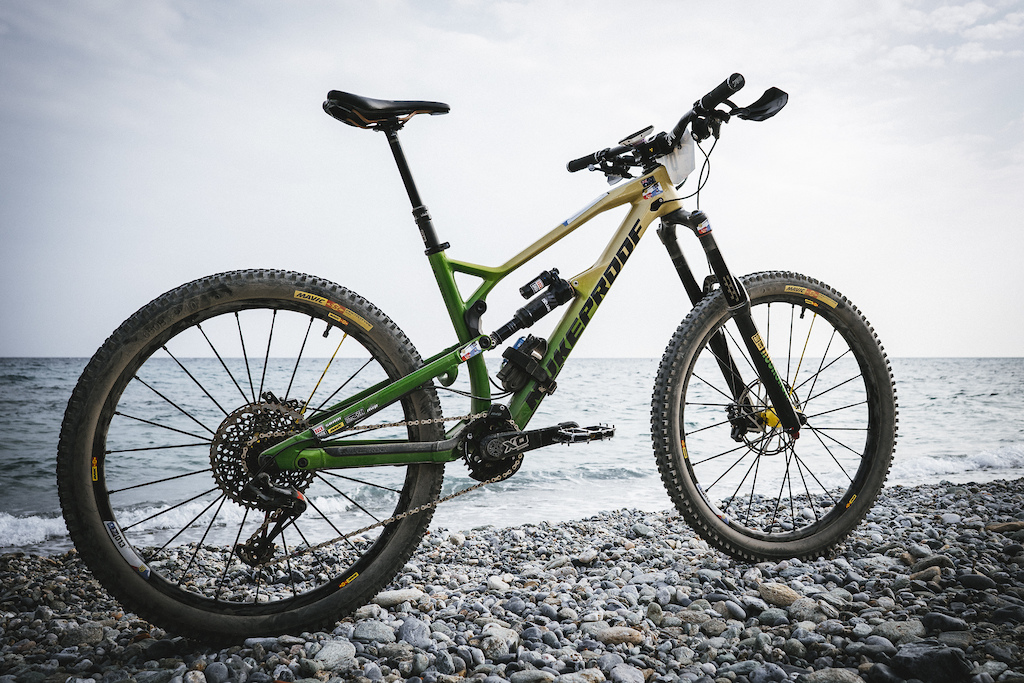 Ok, so things went a bit out of hand here. Inspired by Pedro and Wanita (Sam’s skeleton tattoos on his shins). It’s designed as a bit of fun inspired by Sam, his family, and amusing things we know he would like by our designers. Again all hand created by Johnny, it was a real work of art. Mavic helped by supplying custom rims and have since used our graphics on their Sam Hill signature Deemax's. Again a super special bike as Sam wrapped up his second overall title in the 2018 Enduro World Series on this Mega 275c Frame. 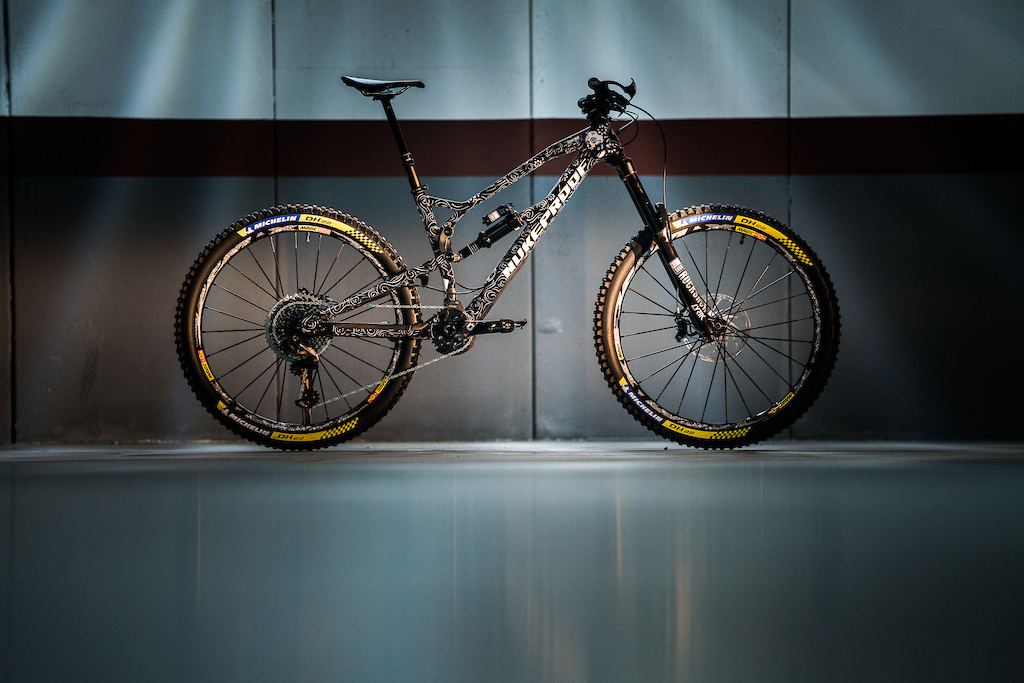 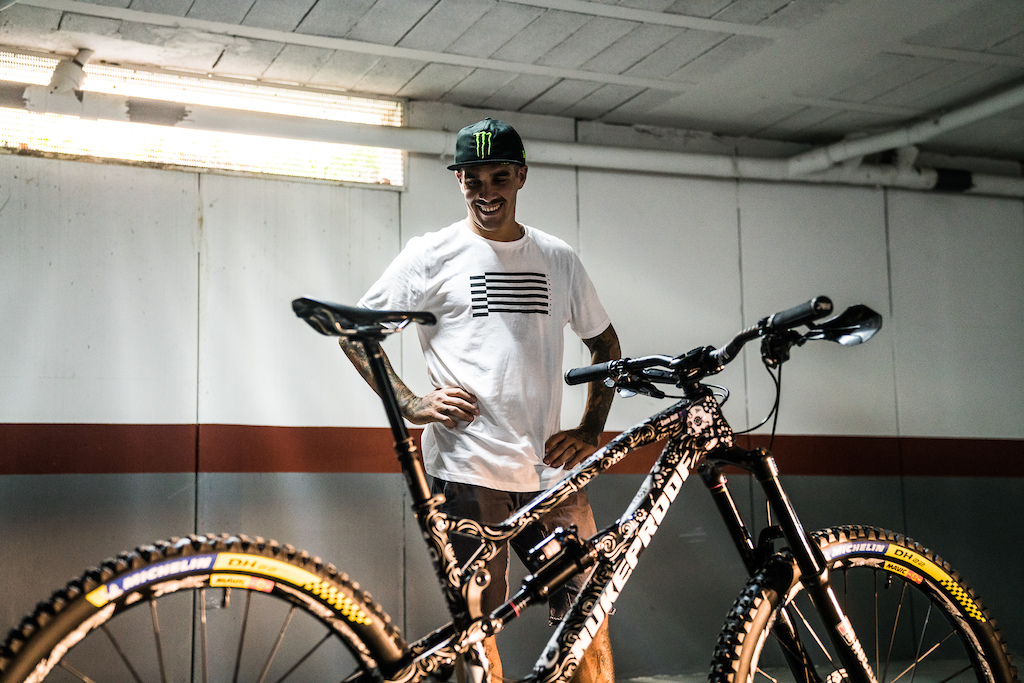 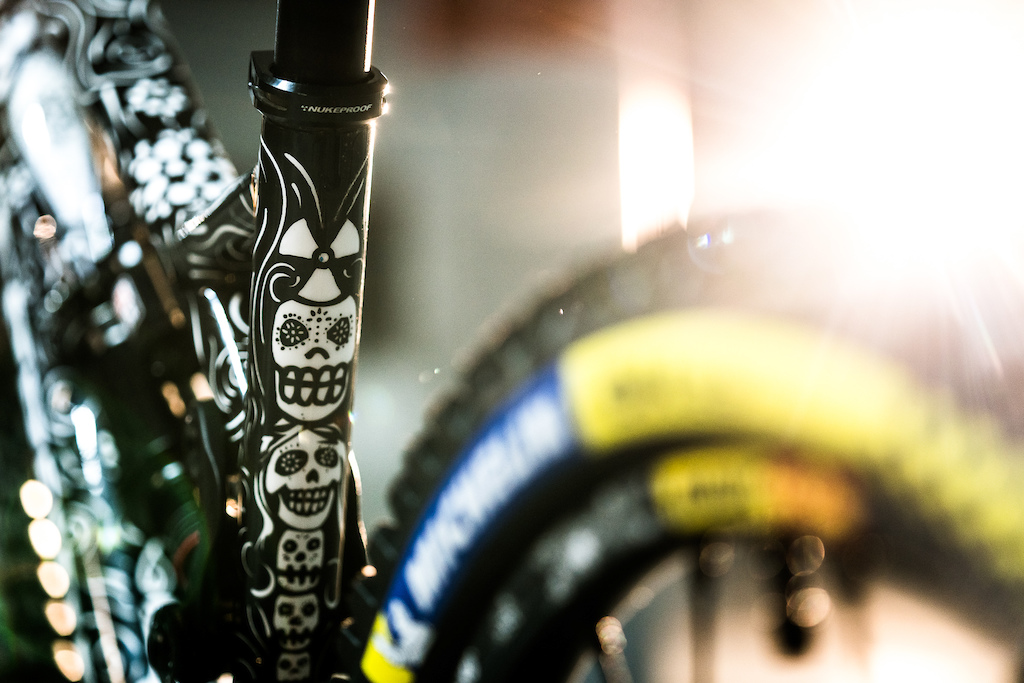 Rather than going down the normal World Champs custom route for the first-ever Trophy of Nations, we chose to celebrate Italy with a Ferrari inspired scheme for Team CRC in Finale Ligure. Team Manager Nigel Page is a Ferrari nut (Sorry Nige, I still feel bad that I couldn't get a frame for you!). Again on the back of an incredible season and Sam taking an unprecedented and incredible his third Elite Enduro World Title. Straight after the final EWS in Zermatt in 2019, The Trophy of Nations was a chance for the team to enjoy a week's riding and kick back on the beach a little. 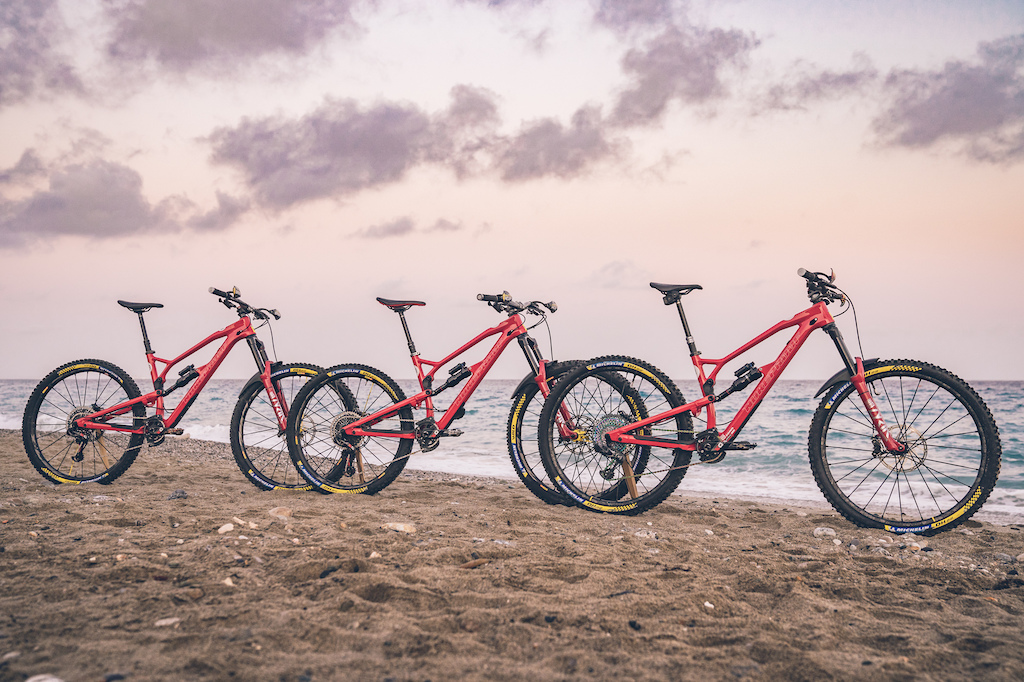 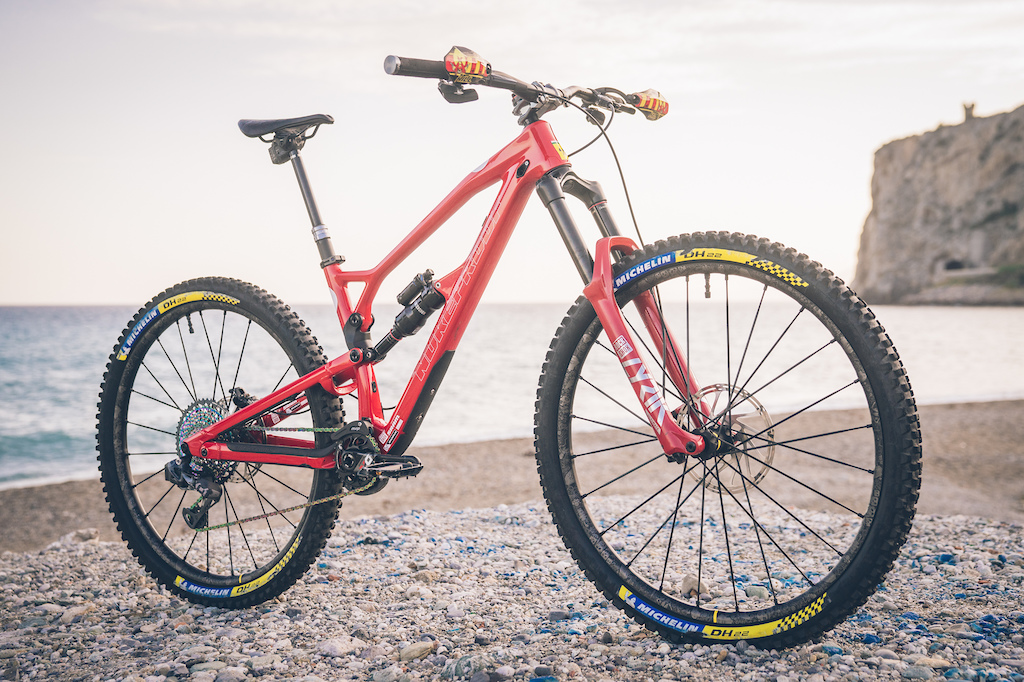 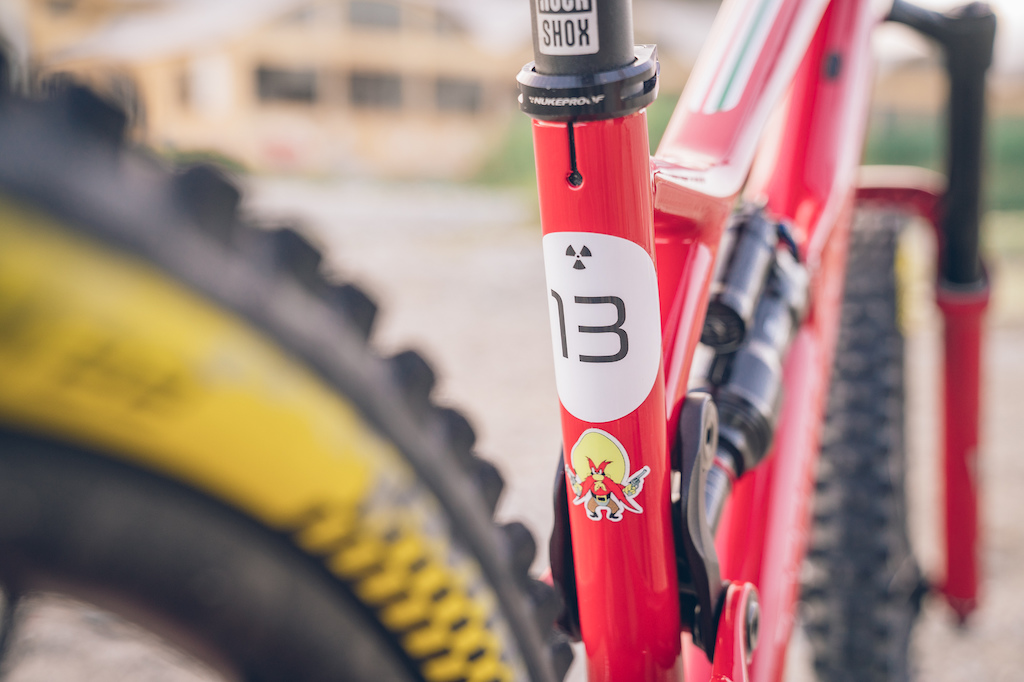 So on to 2020, it's going to be tough to produce something this year, but there are plans in place so sure we will have something coming for the future. Maybe we should show you some of the custom bikes that never made it!

Which is your favourite?

jaame (May 21, 2020 at 3:14)
They are all so good. DoD has to be the coolest. Full red is the one I would want for myself. Barry Sheene is a cool one. It would be awesomer if they had done a few custom GP inspired designs at the same time. Picture Schwantz's Pepsi Suzuki, Lawson's Marlboro Yamaha and Gardner's Rothmans Honda. That would be sweet if they had one each and all raced them at the same time.

jaame (May 21, 2020 at 7:00)
@Norski: good one! There are four riders on the team and I was trying to think of another iconic design. The yellow Yamaha with speed blocks would be rude too!

Didn't need a new bike at the time and i naively thought £3500 was a lot of money to spend on a bike (although it still is a lot/too much money to me).

Fairplay, it was a hell of a lot of bike for your money at full rrp (about £5k i think). It was an absolute bargain at £3500. Kinda wished i'd gone for it now. It was a beautiful.

If it's any consolation, @Nukeproofinternational, my bike at the time was a Mega290 and i've still got it. It's a bit big for me though (it's a long bike and i got short arms and legs), which is a shame because i loved it for the most part (easy flowy, non-technical trails were a blast on it for me). But i still got a lot of love for it and if you've got a spare Mega275 lying around taking up space, i'll take it lads.

Creg (May 21, 2020 at 5:46)
"I wouldn't say this is "custom" in the same terms as the other bikes. It was originally planned to be something else (this may appear one day) before it became the bike that Sam used to return to racing Downhill World Championship in Cairns"

Nukeproofinternational (May 21, 2020 at 6:17)
"Green 'n Gold" was destined to be a very very different design (not very green or very gold), but very Sam.

pimpin-gimp (May 21, 2020 at 7:22)
@Nukeproofinternational: got any sketches of the original intention that you can show us? I love this sort of thing!

Nukeproofinternational (May 21, 2020 at 7:27)
@pimpin-gimp: We've a full design ready to go, but I still want to do it one day, so will hide that for the right time. It's pretty weird.

nukedchipp (May 21, 2020 at 9:20)
My black and bronze 2017 mega pro looks pretty sweet to me. Love all these customs. The frames are just so cool anyway. I think the Ferraris are gorgeous and you could have even included the 'works' raw finish in this as well for me.

It rides like hell!
Absolutely super plush ride which eats up everything, even the biggest roots and worst rock gardens.
But still having a good amount of pop for not so big jumps!
Only reason I’ll retire this frame will be when the newly designed mega is available next year.
I’m super pumped for that frame!

DylanH93 (May 21, 2020 at 11:06)
Oh man those are all so damn good looking. The first one and Ferrari red are probably my favorites. Nukeproof definitely one of the coolest brands. Go team CRC!