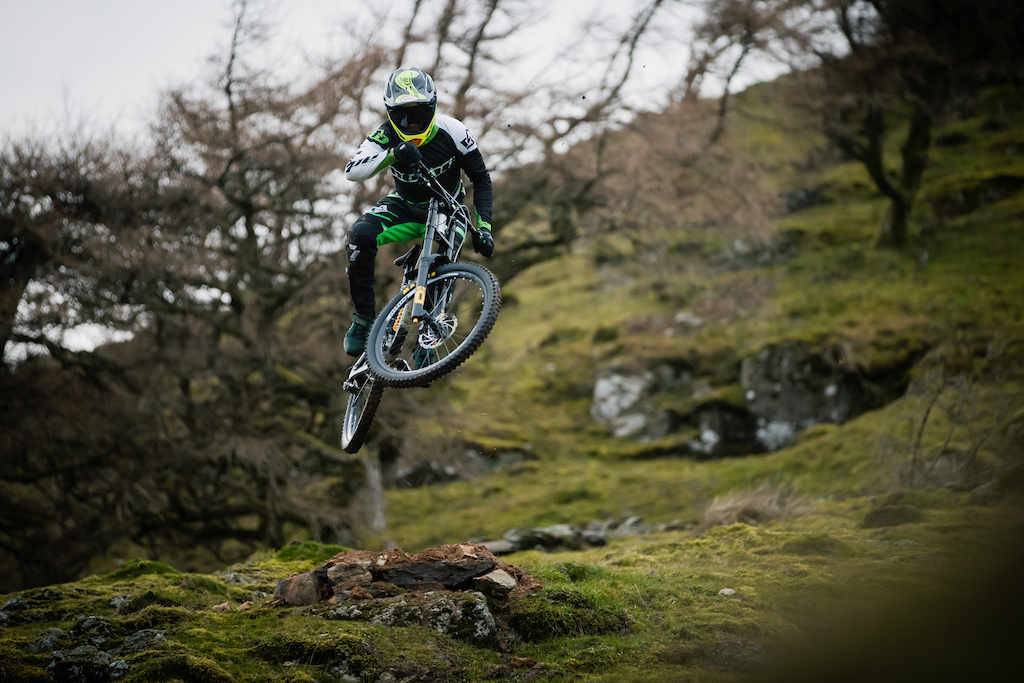 Adam Brayton announced this morning that he will be out for the rest of the season after a crash in training that resulted in a broken collarbone, he will now miss out on the final World Cup and Red Bull Hardline as he expects to be off the bike for around six weeks.

Brayton is handling the news well and told Pinkbike; "This has been a long time coming to be fair. I just got sent out the front door on a fast straight. I almost got ran over by Meg Whyte which would have made things a lot worse. I was on standby to have surgery but they decided not to operate which I'm happy about! It's just a case of being patient now."

We're wishing Adam all the best with his recovery and hope to see him back on the bike soon.

dglobulator (Aug 30, 2019 at 5:02)
Someone needs to invent something better than the current collar bones we're using. Not really fit for purpose in their present form.

isuckatridingbutmybikeiscool (Aug 30, 2019 at 5:36)
And whilst we’re at it why not make the collar bone have more “mid stroke support” with the right amount is “suppleness off the top” and the geo ooh don’t even get me started, if it hasn’t got 510mm in size XS I don’t even want to hear about it.

ChrisOC (Aug 30, 2019 at 6:36)
While we're at it, can we get a new industry standard spine please? My discs seem to have worn out quicker than guide brake pads!

spankthewan (Aug 30, 2019 at 8:24)
@fartymarty: Honestly, broad shoulders are the last thing you need when hoping to avoid a broken collarbone.

stuiewarrior (Aug 30, 2019 at 9:08)
broke my collarbone recently and its healed on top of each other, there for shorter. I have a steeper shoulder angle... yet to ride on it..

spankthewan (Aug 30, 2019 at 9:26)
@stuiewarrior: It should be better for uphills and quick steering, but it might suffer on the downhills.

Bristecom (Aug 31, 2019 at 23:10)
I've broken my collarbone twice. It's interesting because both times I believe I mostly fell on my head and I found out that the collarbone is designed to break to better absorb the impact to minimize skull or neck damage. So I'd say it's a pretty good design. If it was too strong, it would increase the chance of a more permanent injury or death. But damn does it hurt for a week or so.

styriabeef (Sep 1, 2019 at 4:32)
I broke my collarbone 5 times now 4 times mountainbike related. 3 times it healed the way it was slightly not aligned. 2 times I need surgery plus one surgery to get the metal out just recently. If you look where the bone ends, you don't want it to be stronger. Because Bones break at some point. I'm pretty happy with it being that one and not the shoulder or upper chest or neck. It's a relatively minor injury. Take it as it is and get on with life and be happy that it is nothing really serious.

lwkwafi (Aug 30, 2019 at 7:06)
Ugh, now I am tempted to be one of those to suggest surgery. Broke mine in June, looked like it would heal fine, but at 3 week follow up saw that it was all displaced (almost z-shaped). So I lost 4 weeks just to have them cut me open. But 2 weeks post surgery, I was on a road bike commuting and doing some gravel.

iduckett (Aug 30, 2019 at 6:04)
Agreed, I just listened to that downtime episode last night. He was stoked for Hardline so too bad. Heal up Adam!

Knott4me (Aug 31, 2019 at 7:24)
The collarbone is designed to break as the alternative is it pierces your neck and your dead .YOU DECIDE