The train rocks slightly as we cruise at deceptively high-speed along the shore of Lake Geneva. Like a postcard, the water is calm like glass while a cluster of white swans bob along under a swooping willow tree while Montreux’s medieval Chillion castle and vineyards blur past. People chat on the train in civilized quiet voices. We eventually leave the lake and head up the Rhone Valley, the mountains out the window of the train grow bigger along with our anticipation as we cross into the Canton of Valais. Like a giant bike park with lifts and roads sprinkled everywhere and seemingly endless singletrack, this special region of the Alps begs to be explored. After nearly 20 years of running guided trips here, it still remains one of our favourite places to mountain bike on the planet. A recorded voice comes on the speaker as the train begins to slow down, "prochaine arrêt Martigny, Il prossimo fermare Martigny, nächster halt Martigny, next stop Martigny." We pull into the station, drag our bikes and jet-lagged bodies onto the platform and breath in the mountain air. It's on. 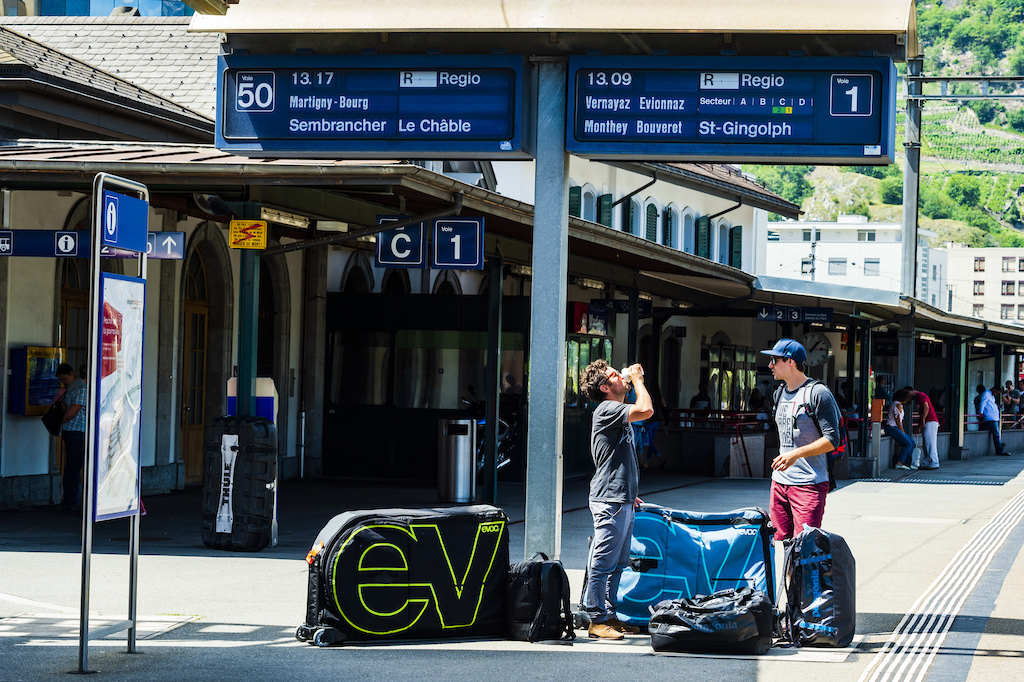 In Switzerland, the Swiss Federal Railways will publicly apologize if a train is two minutes late. You'll never be late to shred singletrack in the Valais. Stoke level high upon our arrival to Martigny. 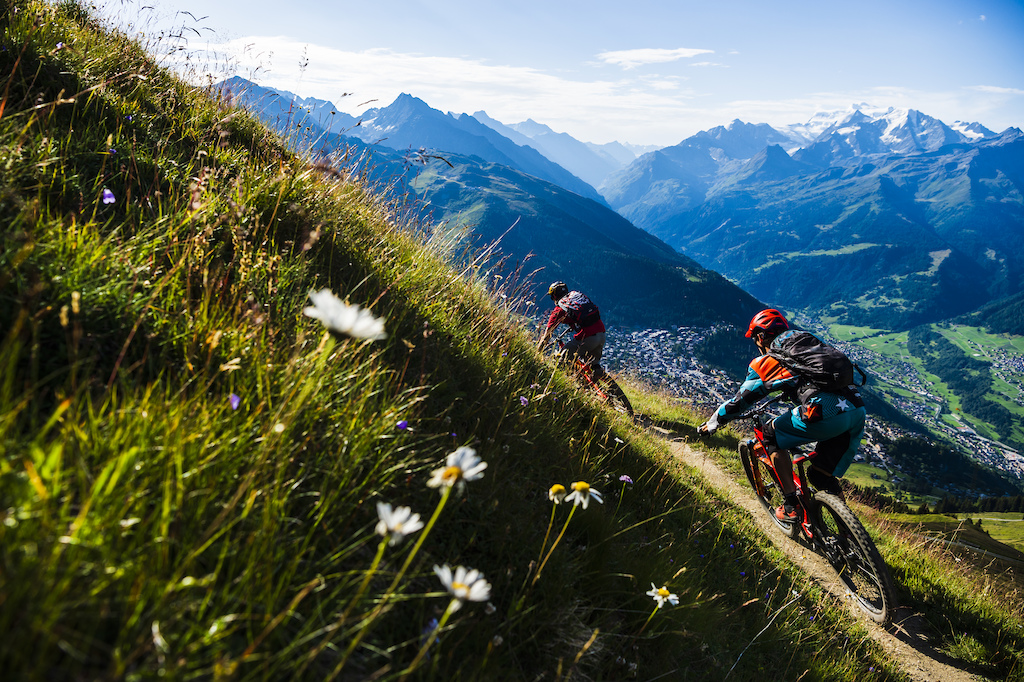 Local rider Ludo May following Stephen Matthews high above Verbier in the beautiful Val de Bagnes with the 4314m Grand Combin looming in the distance. 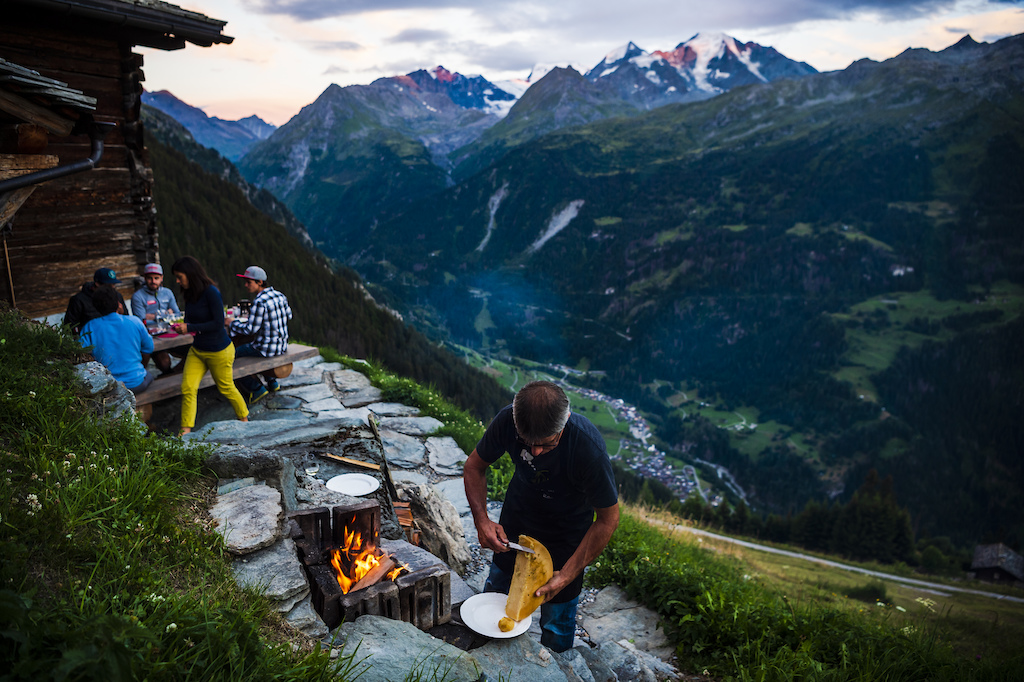 Local raclette cheese heated over a fire at Jean-Marc's mountain hut with family & friends does not get much better. Far below, via rugged and steep singletrack is his hotel, the cosy Hotel La Vallée. 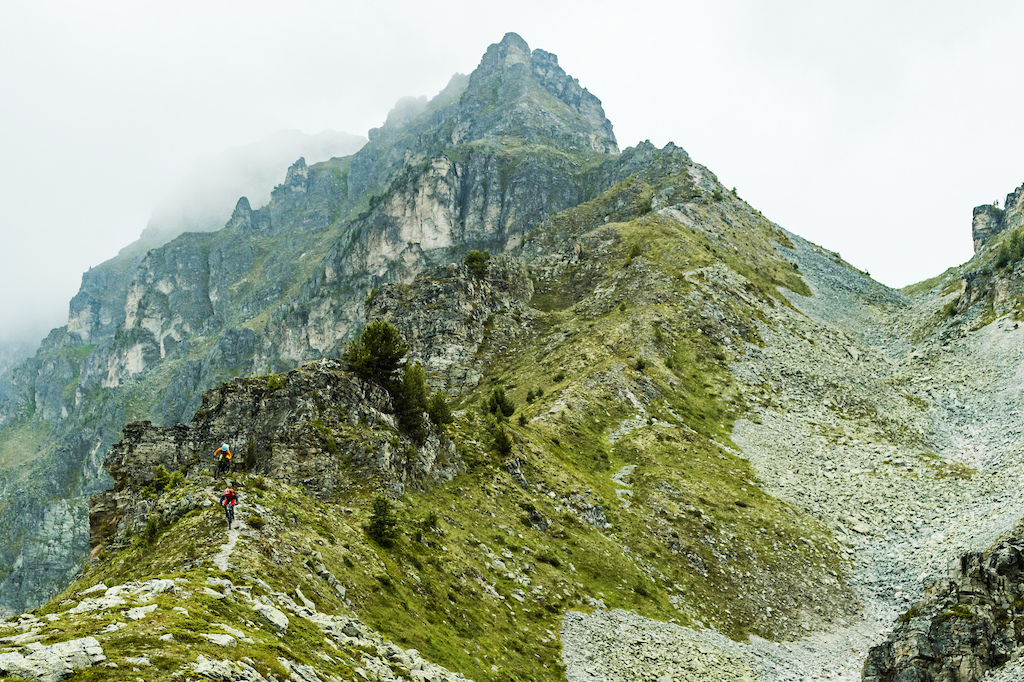 The Valais' extensive web of hiking trails are everywhere. Some are great for bikes while other trails are hike-a-bikes in both directions. Julia Hoffmann & Chris Winter in the Val d'Anniviers. 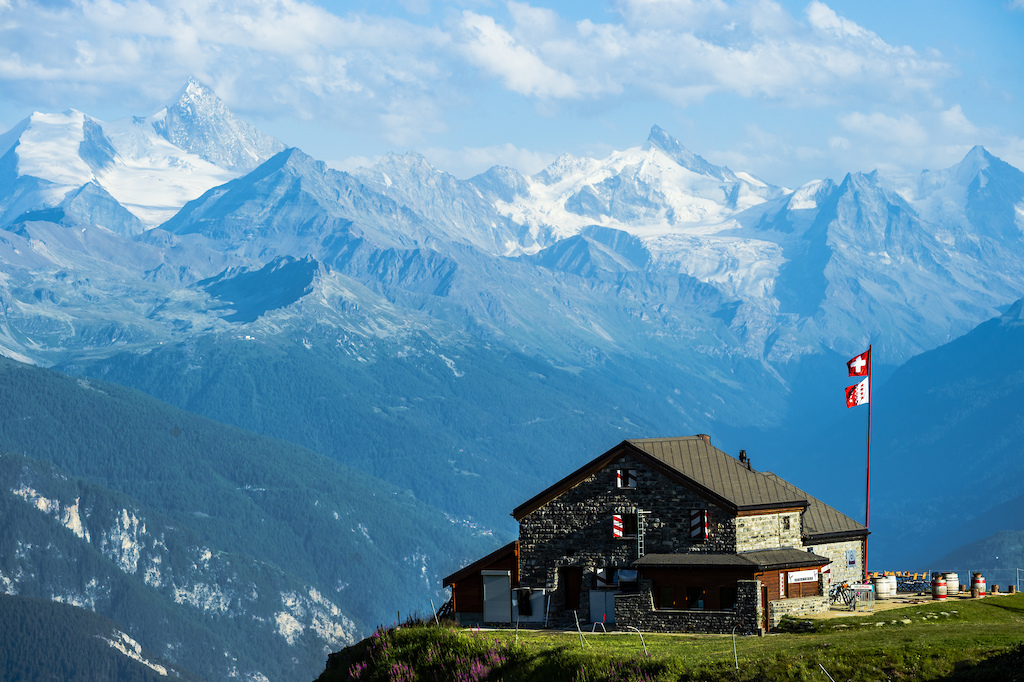 Mountain huts like the Cabane des Violettes perched high above Crans Montana at 2208m are dotted throughout the Valais. Always with singletrack and a massive descent at the doorstep. If you look closely at treeline across the valley slightly left and below a ridgeline, you'll see a small white dot, tomorrow night's accommodation. 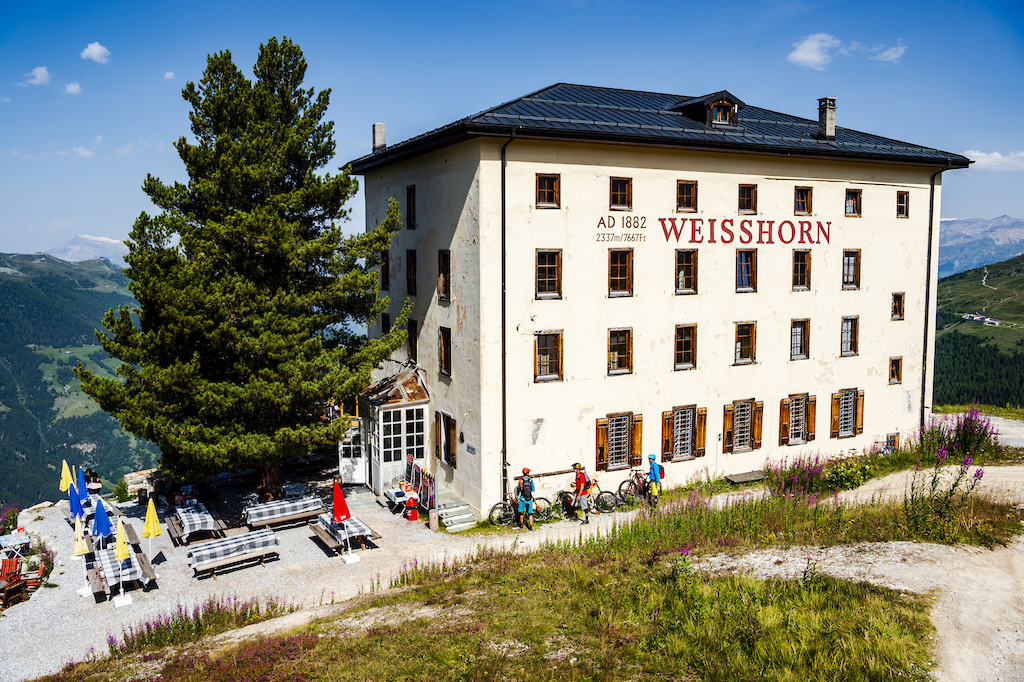 The historic Hotel Weisshorn at 2337m and constructed in 1882 by Italian Francesco Mosoni as it sits today. Creaky wood floors, a sweet bar, a few stuffed animals and killer views from every window. 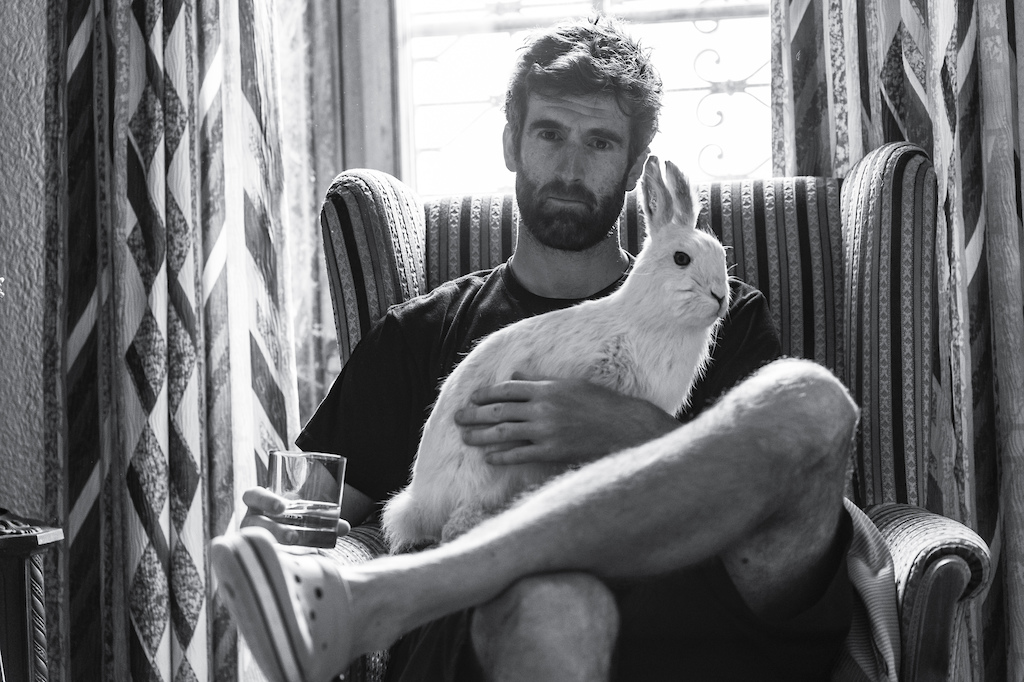 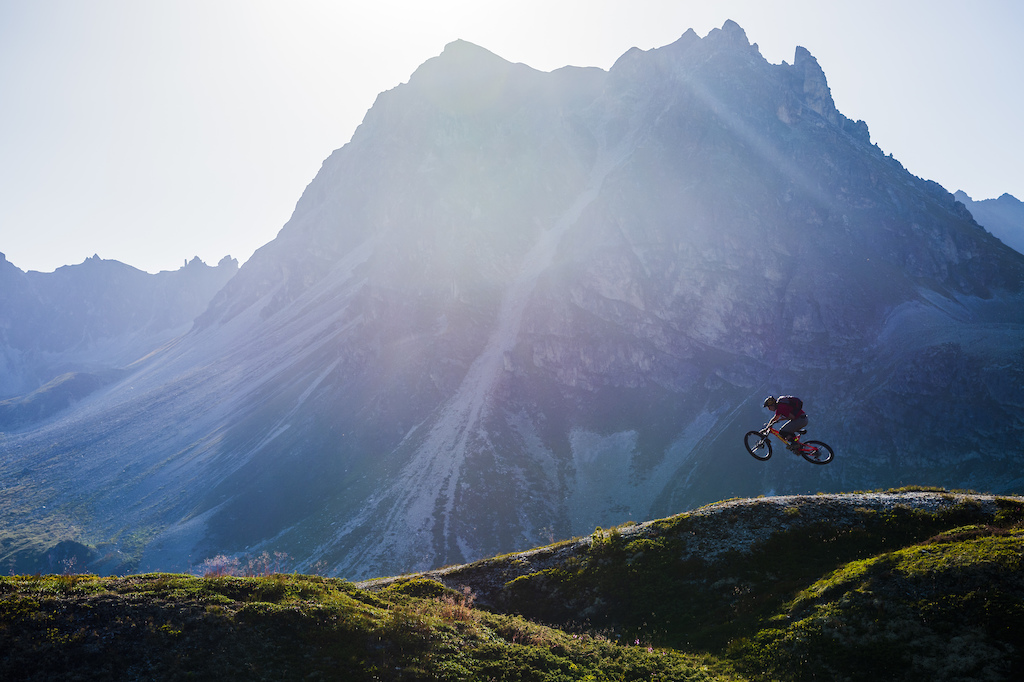 On your left, hikers. Stephen Matthews laying it over on another section of amazing trail. 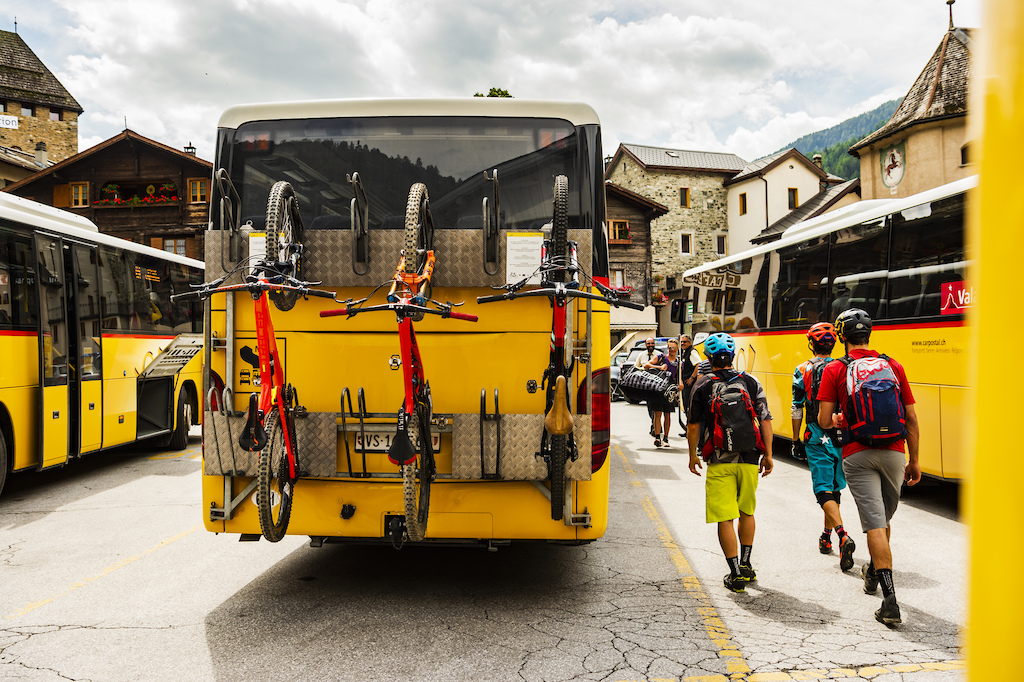 Off the airplane onto the train onto the bus onto a lift to the high-alpine...Switzerland's mountain transportation system is like nowhere else on the planet. And very bike-friendly. 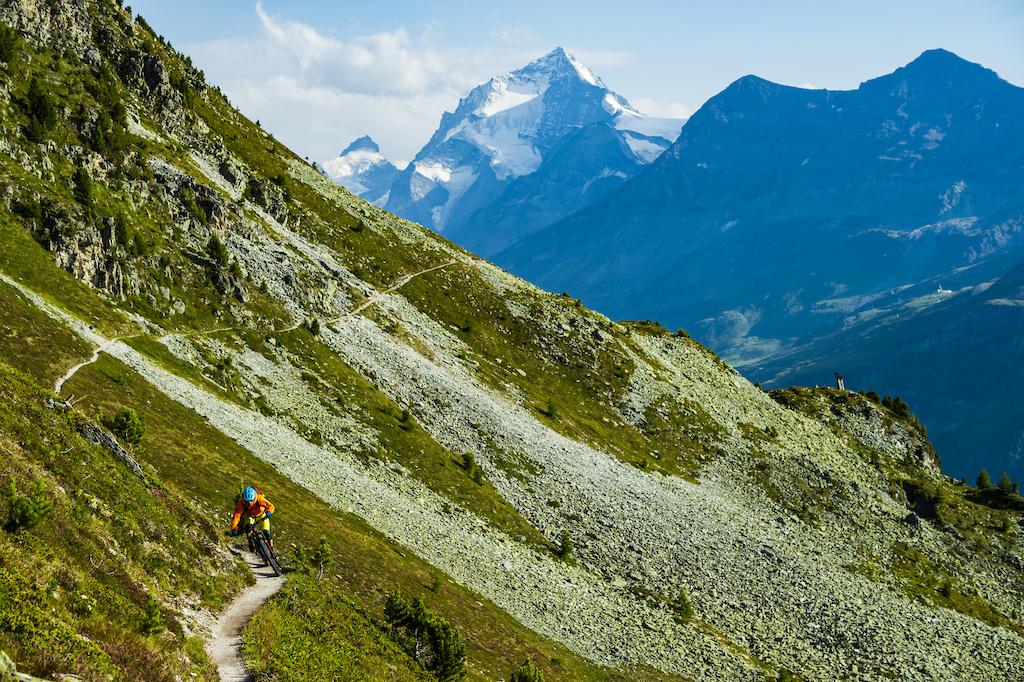 Big Mountain Bike Adventures' owner Chris Winter on a quintessentially perfect trail near the village of Zinal with the 4357m Dent Blanche towering in the distance. 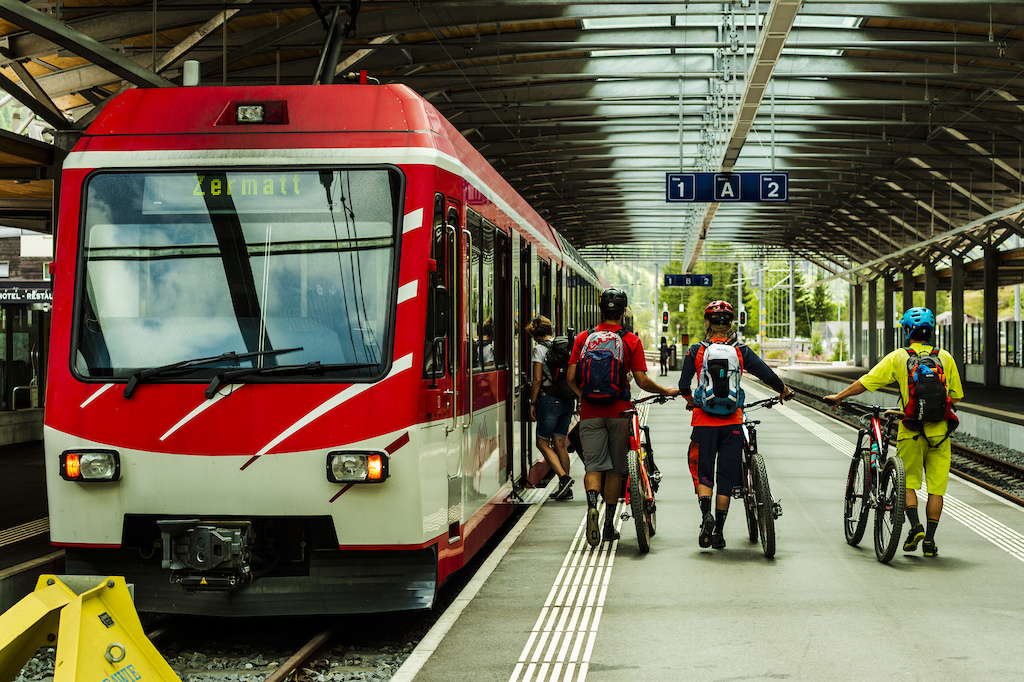 Next stop, the Matterhorn. 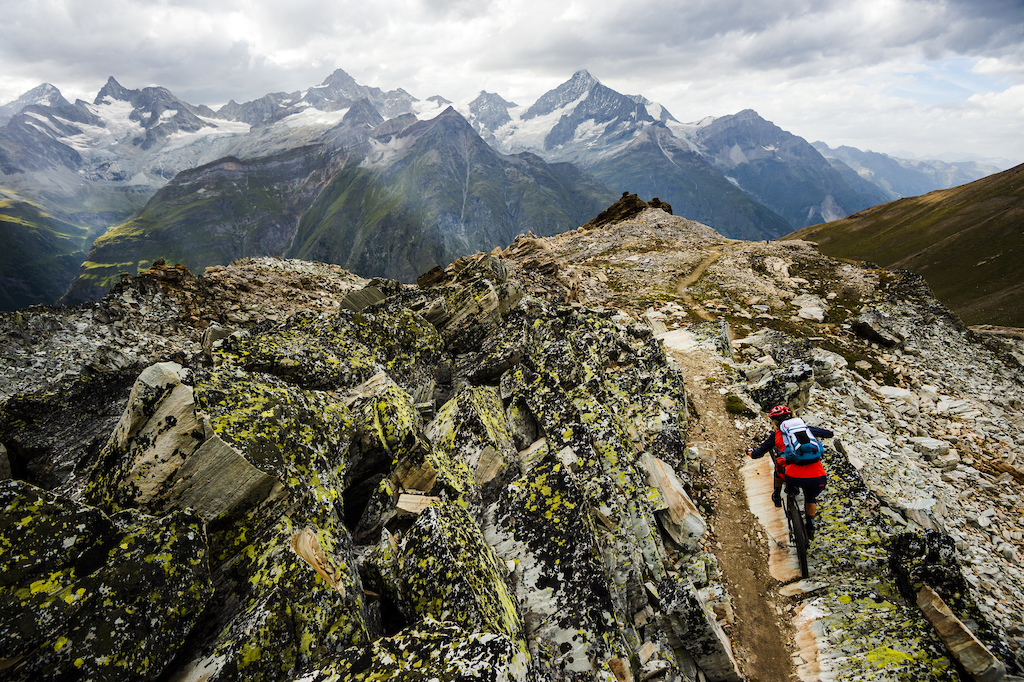 With nearly 400km of hiking trails and 52 lifts up to 3883m, Zermatt is pretty close to perfect for mountain biking. Just bring your wallet as it's not at all cheap, but worth every Swiss franc as Julia Hoffman finds out. 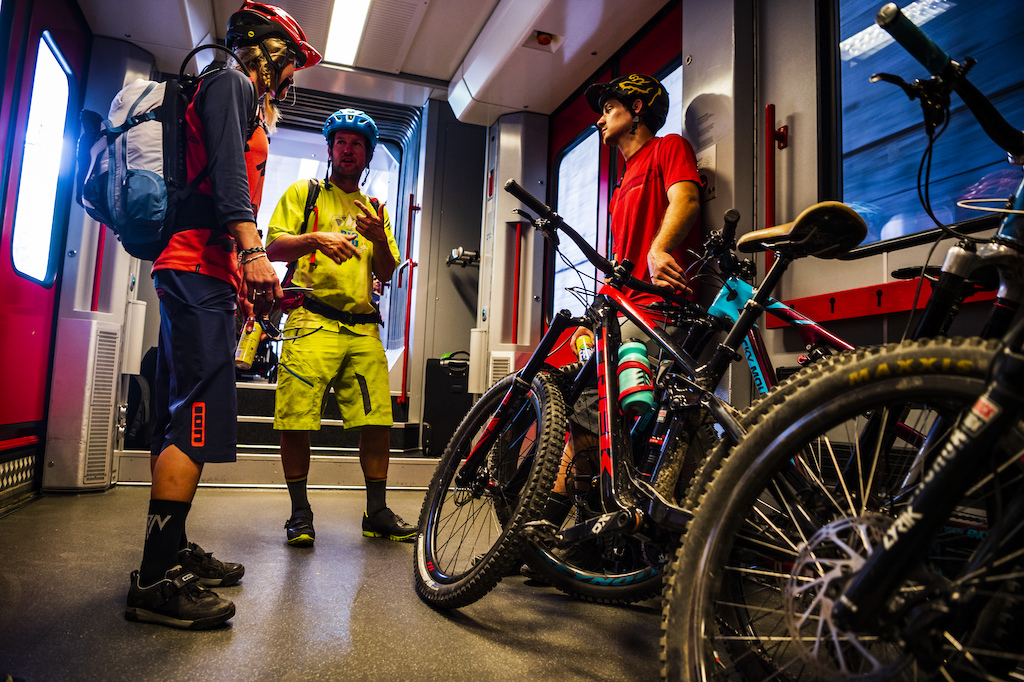 Another ride, another train shuttle. This time coming up the Matter Valley, surrounded by massive peaks. 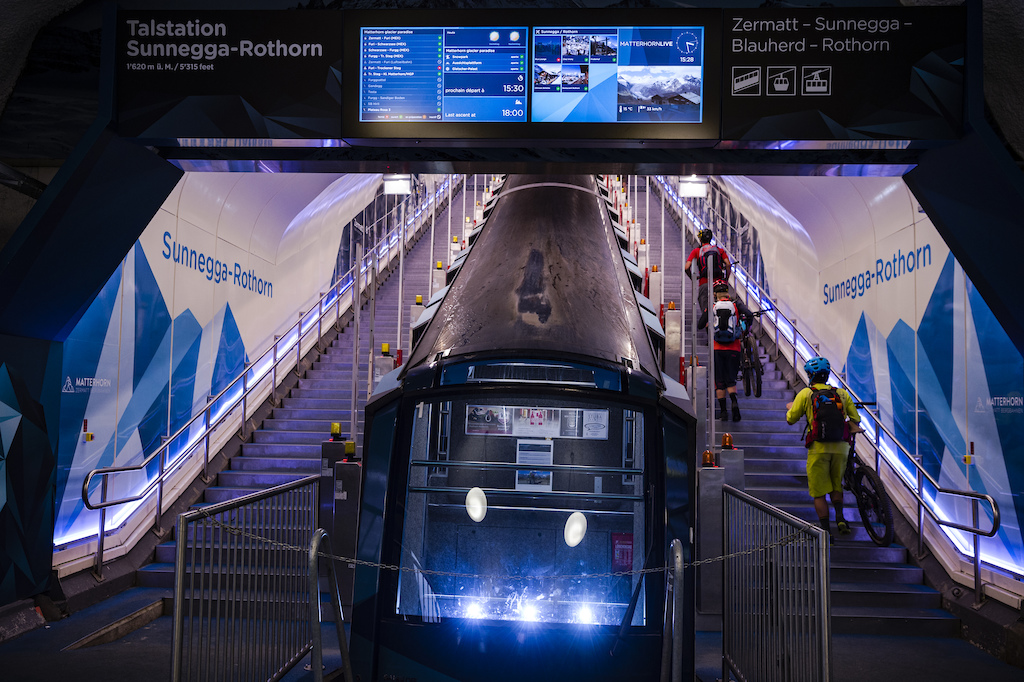 The Standseilbahn, a three-minute shuttle bombing through the mountain at three meters per second.Efficient! 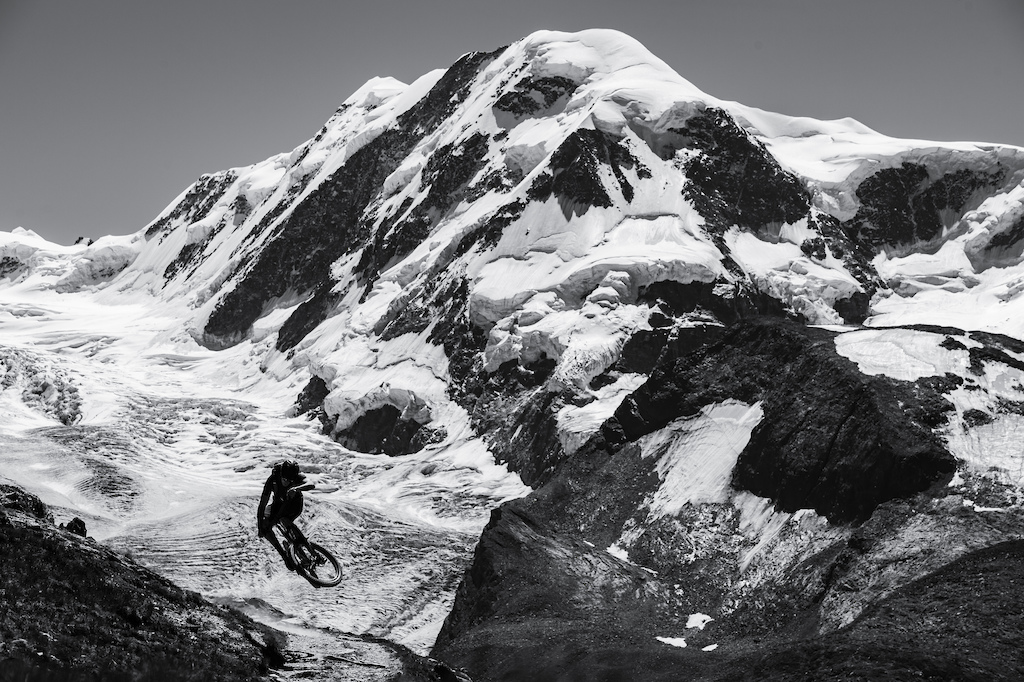 With 38 mountains over 4000m surrounding Zermatt, the views are impressive, to say the least. Stephen Matthews taming the rugged landscape with mad style. 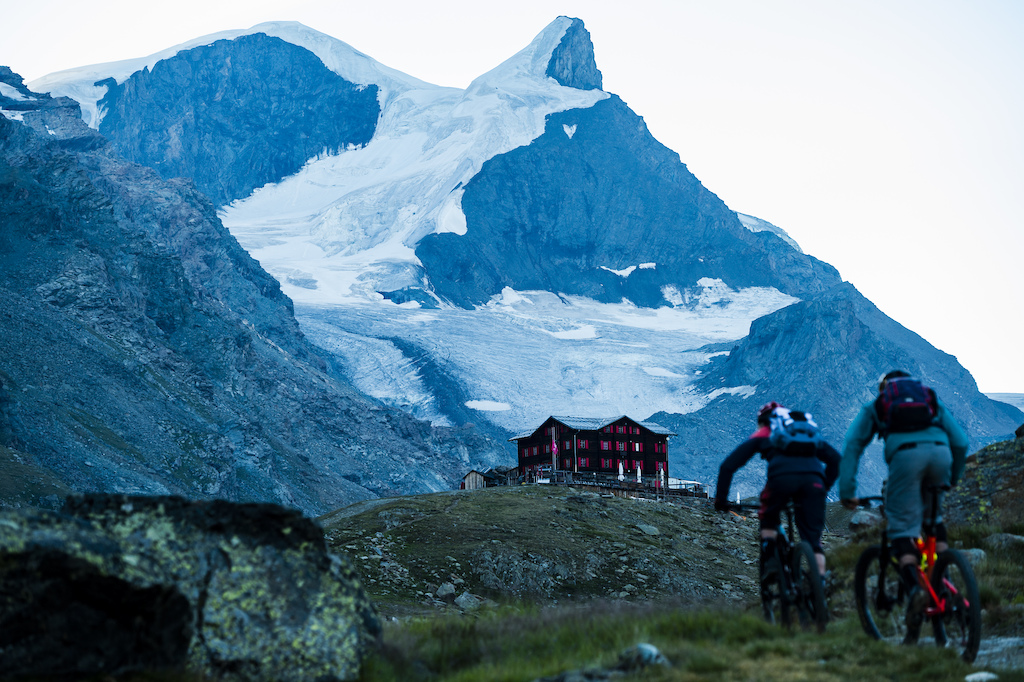 Where else in the world can you find three-star digs at 2606m? 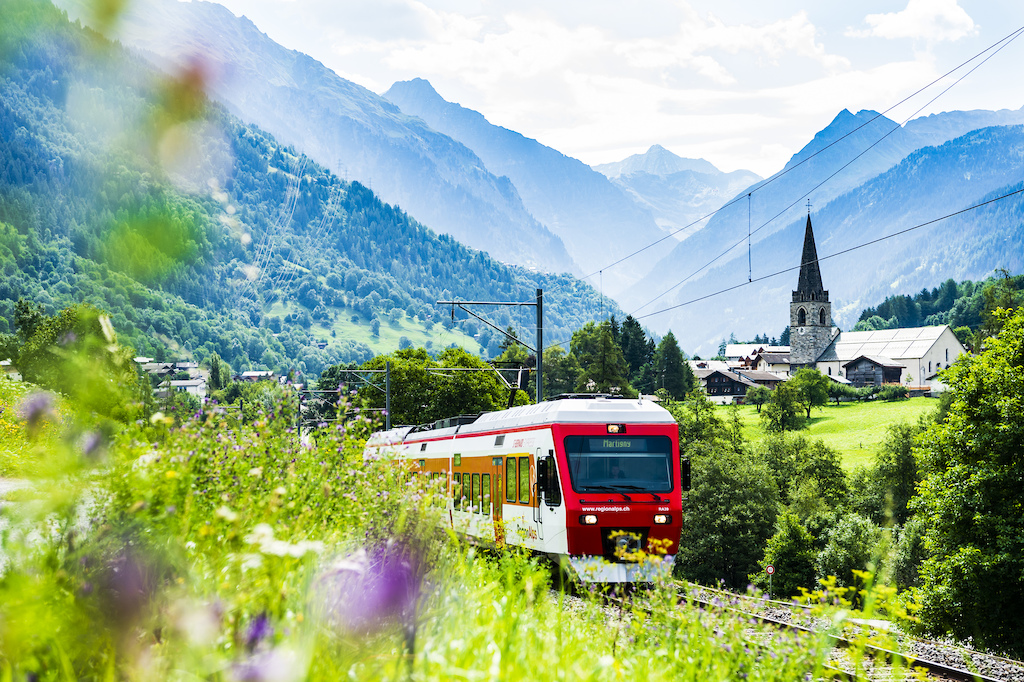 Tweet
Must Read This Week
A Complete Timeline of Coronavirus' Effects on Mountain Biking [Update: Taipei Show Goes Virtual]
126339 views
Interview: Trek's Travis Brown On Experimenting With 32" & 36" Wheels
88677 views
Ridden & Rated: 4 of the Best eMTB Motor Systems for 2020 - Bosch vs Brose vs Shimano vs Fazua
75262 views
First Ride: Cannondale's All-New Scalpel SE
74267 views
Pinkbike Poll: If You Had to Ride One Bike for the Rest of Your Life, What Would It Be?
55059 views
[Updated] Mountain Biker Attacked by Grizzly Bear Near Big Sky, Montana
49981 views
Video: Claudio Caluori Tries to Keep up With Nino Schurter on his Home Trails
48013 views
15 Bike Checks from Craig Evans, Iago Garay & The Santa Cruz Free Agents
44582 views

inversedotch (May 4, 2019 at 0:38)
Great video! If you plan to visit Valais/Wallis, don't forget to check (and re-check) Trailforks (www.trailforks.com/region/valais).

The Swiss Federal Railway is late quite often in our little valley, especially with train coming from Italy via the Simplon tunnel. If you travel to Geneva Airport, be sure to check for delays on the free CFF/SBB application.

onterribleftw (May 4, 2019 at 8:53)
From Martigny I’ve taking trains to Chamonix, Les Diablerets and Verbier and the Post buses to Champex Lac and Crana Montana. Just the most amazing system of public transport, thanks Switzerland!

Riggbeck (May 4, 2019 at 4:58)
10 years since I found the Zinal trail from the Weisshorn hotel. Blue bird day, no wind. Absolutely brilliant. Have to give credit to my running friends that raced it for the tip.

kiwimike71 (May 5, 2019 at 13:20)
Stunning Vista's, I have always wanted to go to Switzerland even before taking up mountain biking and this video has reaffirmed my desire to go