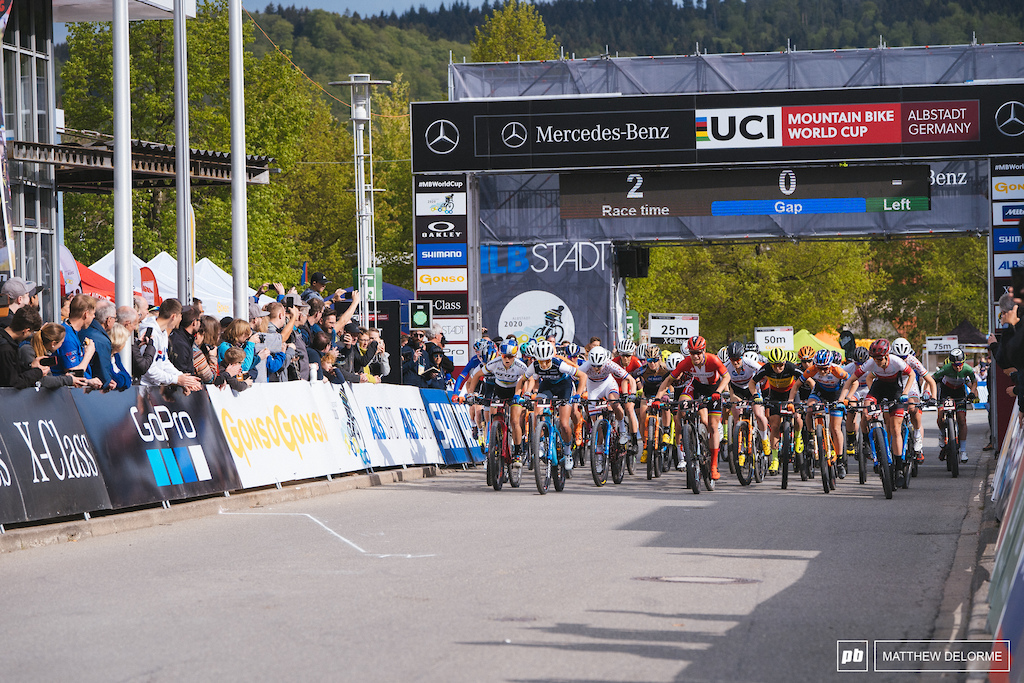 The UCI has announced that the XC World Championships which were due to take place between June 25-28 in Albstadt, Germany has been cancelled.

After initially postponing the XC World Championships on March 28 the UCI has announced today that the event will no longer be taking place in Albstadt this year.

In the press release, they acknowledge the work done by the City of Albstadt, the German cycling National Federation (BDR) and the State of Baden-Württemberg in helping the cycling federation through the process but they have all now come to the decision that the only way forward is to cancel the event. The UCI is now working on ensuring the XC World Championships still take place at some point in 2020.

Read the full statement from the UCI below: 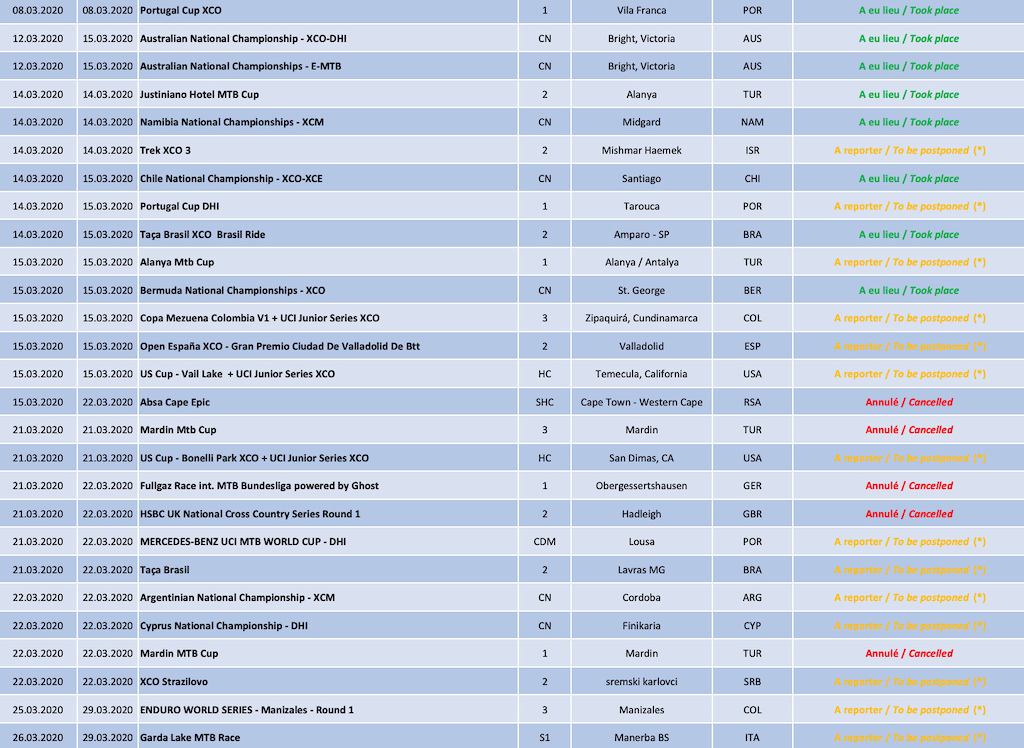 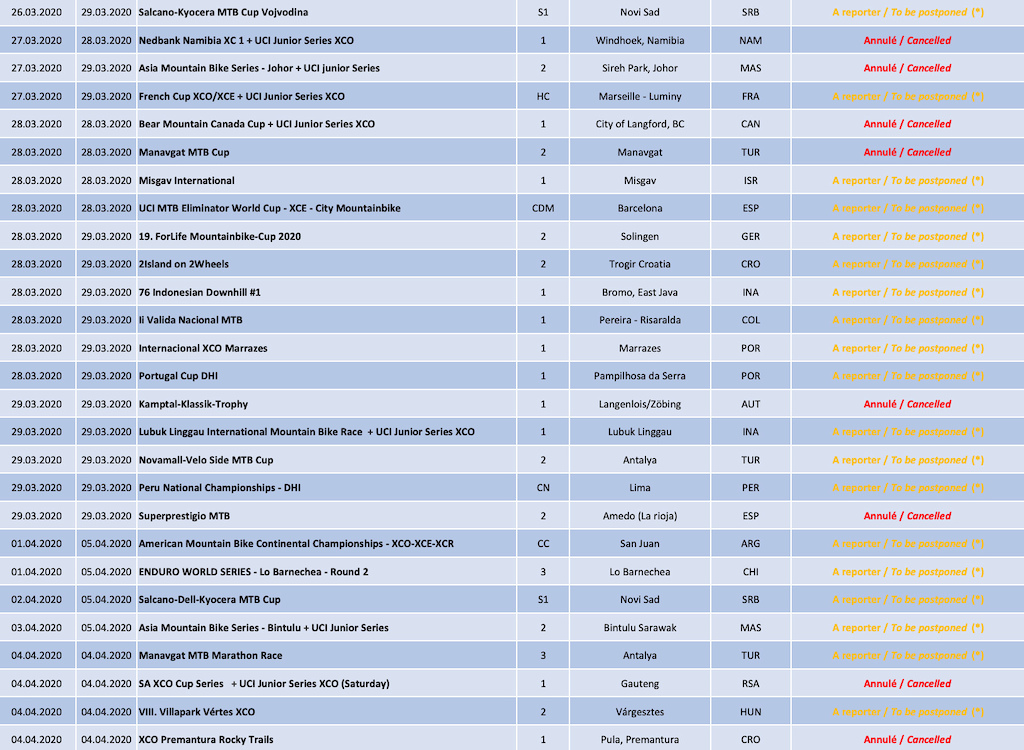 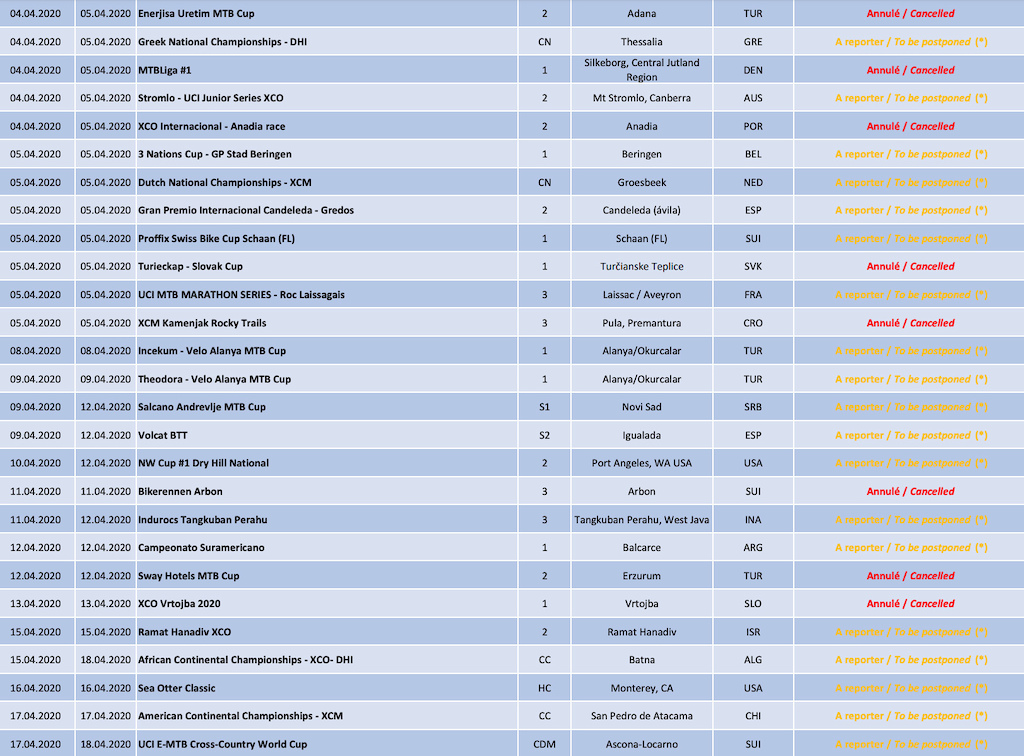 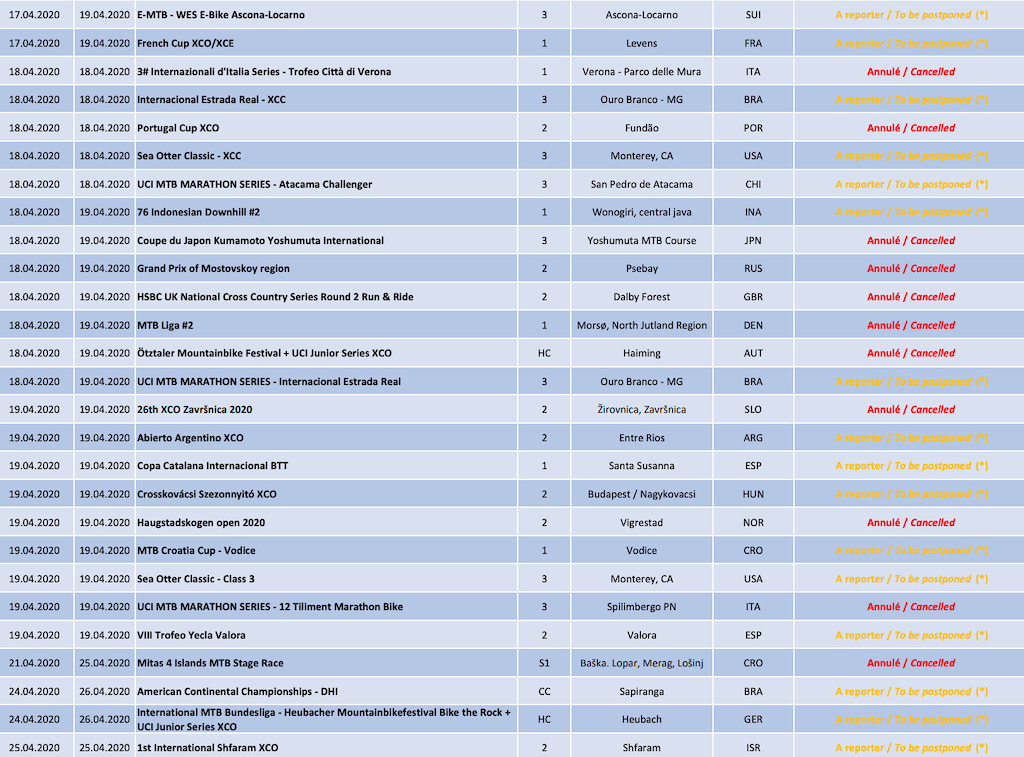 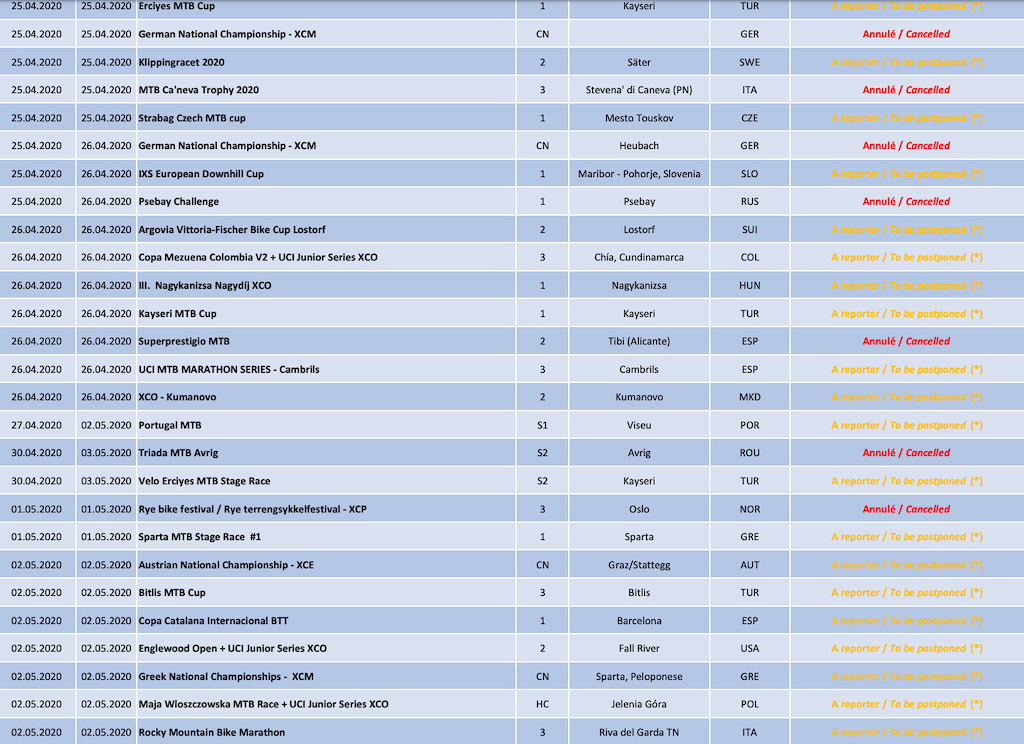 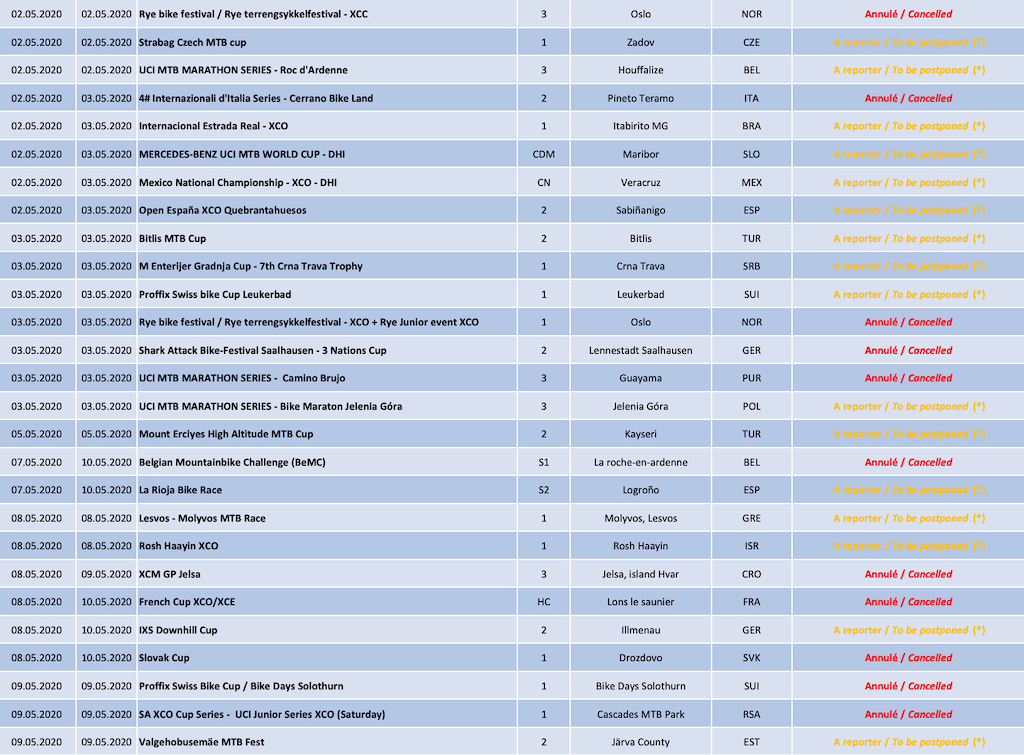 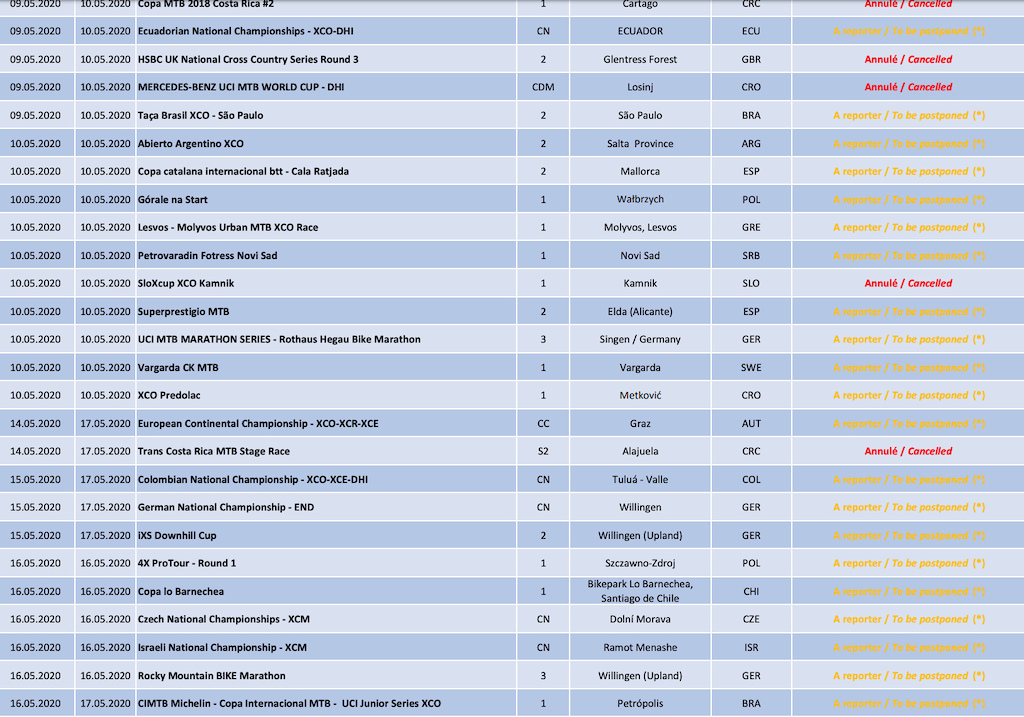 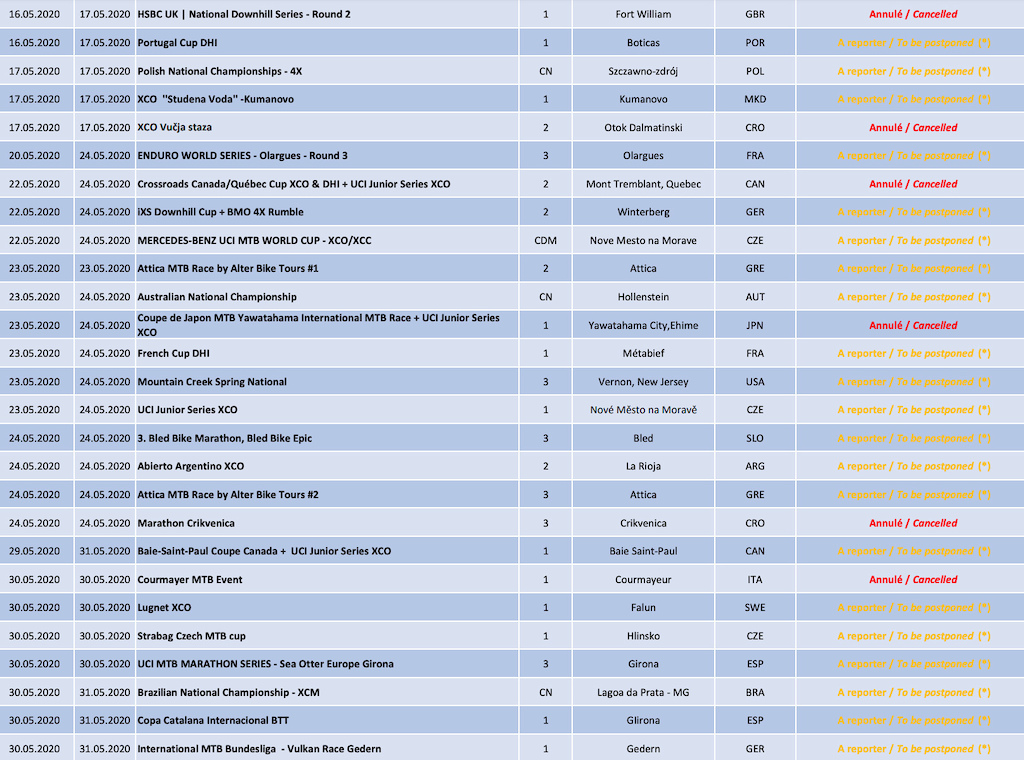 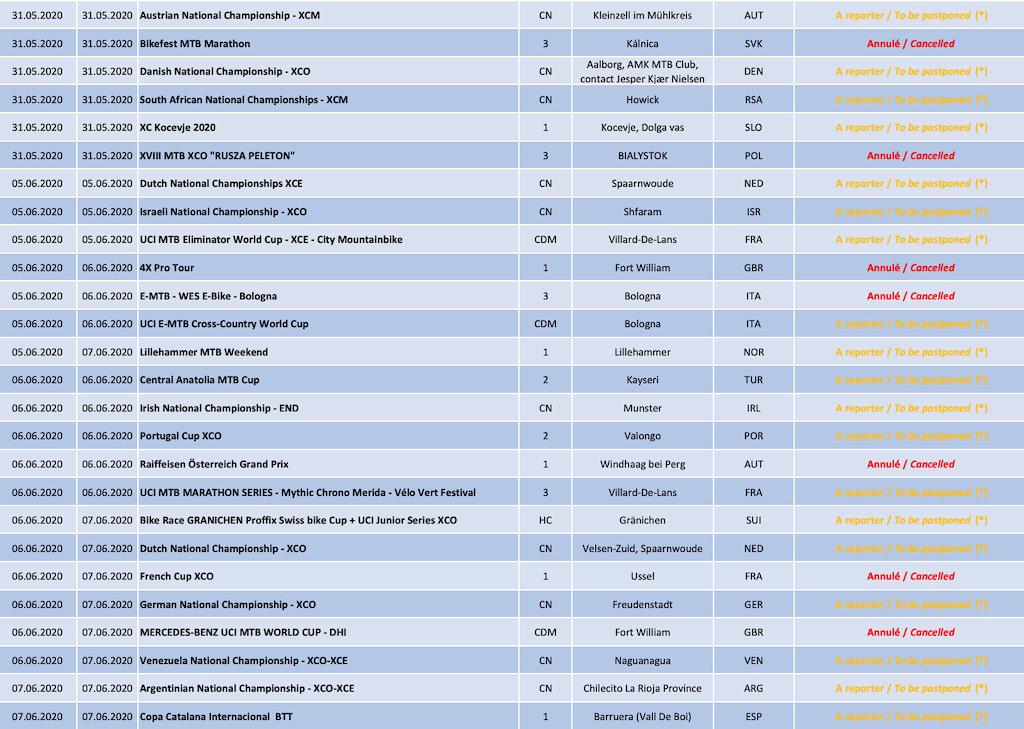 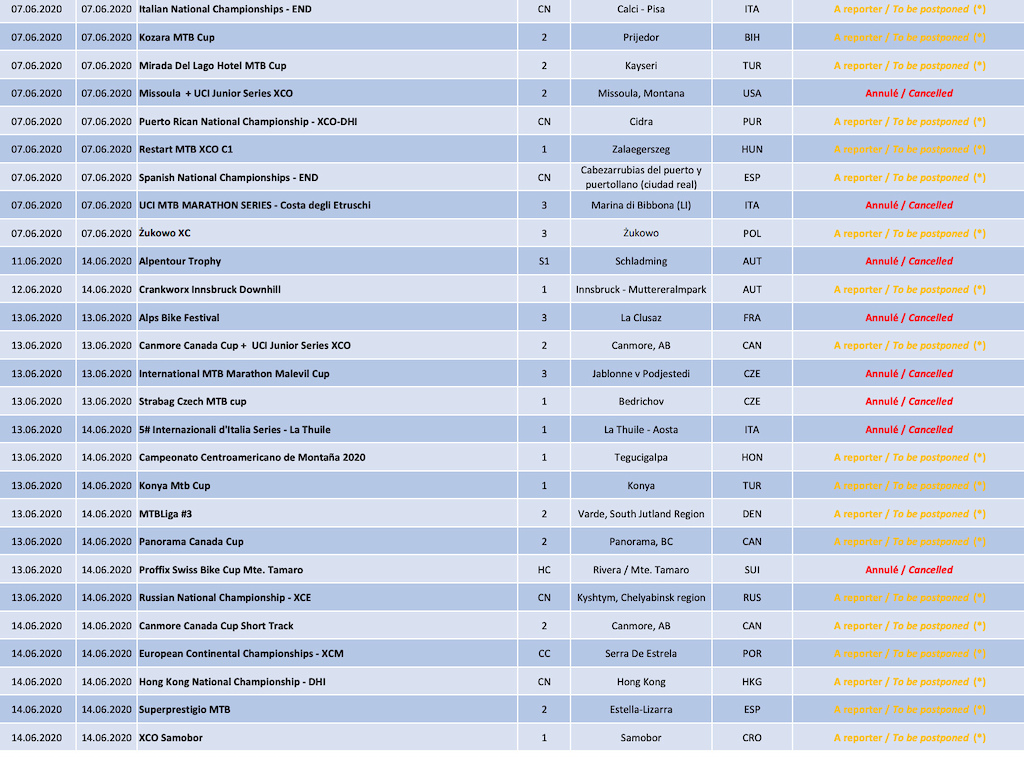 Better safe then sorry. 2021 will be a better year

vjunior21 (Apr 30, 2020 at 14:33)
Can we cancel anything related to the Kardashians too? I think this stay at home everyone on the internet looking to be entertained has fed that annoying family's popularity.

DoubleCrownAddict (Apr 30, 2020 at 5:56) (Below Threshold)
Some of the companies working on vaccines say there is a slight chance we could have one by the end of the year if we are lucky, but 1 1/2 to 3 years is the more likely timetable.
If you haven't got a bicycle riding filtration facemask yet, its a good idea.

Clifflane3 (Apr 30, 2020 at 11:08)
@DoubleCrownAddict: why do you need a mask riding outside? WHO says it recommends healthy people DO NOT wear masks. And the CDC recommends only wearing masks where you can’t social distance. In addition, buying a filtration mask currently is irresponsible. All those masks should be going to health care professionals. I recommend reading the WHO information, their website lists the studies their referencing in regards to face masks.

Also, a vaccine is in stage 1 testing while most likely will be spring to fall next year that it’s available to mass population, 3 years is extreme. This will become a yearly vaccine just like the flu, we all will have to get every year.

DoubleCrownAddict (Apr 30, 2020 at 11:24)
@Clifflane3: lol me ordering a bicycle facemask off Amazon is irresponsible? Responsibility is protecting your health, so I'm wearing a mask.

If a rider coughs in front of you you will be traveling through their germs. I completely disagree with the WHO and they generally have not provided people with responsible information during this pandemic. Just look at the failed results of their guidance. EVERYBODY in China wears them, case closed.

Clifflane3 (Apr 30, 2020 at 11:30)
@DoubleCrownAddict: do what you need to do bud, nothing against wearing a facemask. But you shouldn’t be riding in groups currently to where a rider is close enough in front of you to cough on you (with or without wind). But 100% agree with you that taking care of your health is vital and protecting yourself if key to stopping the spread. But I stand by filtration masks should go to front line.

Clifflane3 (Apr 30, 2020 at 11:33)
@DoubleCrownAddict: also I wouldn’t use China wearing face masks as a good example for your argument against the WHO saying healthy people don’t need them. Probably strengthens the argument they do not stop the spread. And the WHO I agree has dropped the ball, but referencing the peer reviewed studies that has nothing to do with them is just scientific fact.

DoubleCrownAddict (Apr 30, 2020 at 11:48)
@Clifflane3: No group rides, just careful about following other riders. You could start a downhill by yourself but then you might catch up to other people, or somebody might catch you that doesn't have a mask and is unknowingly carrying the virus.

Clifflane3 (Apr 30, 2020 at 11:53)
@DoubleCrownAddict: true, and I shouldn’t be arguing with you. My apologies, you’re taking this virus seriously which is more than a lot of people in this country. So I appreciate that. Stay healthy!

scotttherider (Apr 30, 2020 at 15:10)
@vjunior21: thank you for the suggestion but if I’m gonna go retard I’m going full retard and wearing my PAPR in public. It’s a P99 filter so far surpasses the N95 mask. Also it blows the air in your face so it’s kind of like air conditioning. Just don’t fart or it’s like fruit cupping yourself only worse.

dthomp325 (Apr 30, 2020 at 6:32)
Can't believe Albstadt, the absolute lamest UCI course, was going to host WC. UCI needs to either convince them to build a WC worthy track or get them off the calendar.

lancifer (Apr 30, 2020 at 11:08)
Hey where's the picture of Nino showing his ass to the Chinese government...? Guess he just probably blames Trump more! Thanks China, it's going to be a great year...one for the books!

thefreefinn (Apr 30, 2020 at 6:55)
There will probably be no XC Worldcampionship this year. If Germany can't host it then nobody can host it.

smithcreek (Apr 30, 2020 at 5:28)
Not the worst record, not after one month and, the big one, you can't eat money. They can run the printing presses 24/7 but unless people are actually producing goods it doesn't matter at some point, soon. Maybe it won't hit home for most people for another month or two when the price of meat is astronomical and the grocery store is sold out anyway.

dthomp325 (Apr 30, 2020 at 6:41)
@JohanG: A friend of a friend is a nurse in NYC. Last 2 weeks she had 14 patients. 9 died, 3 in permanent vegetative state, 2 recovered. Most people over 50 who are admitted dies. Most under 50 who smokes or has some pre-existing lung condition dies. She works on a 9 floor hospital and 8 floors are now dedicated to COVID cases only. They have refrigerated trucks outside for the bodies because there's nowhere else to put them. It is not the flu.

And of course the insidious thing about it is that many people contract it and show no or mild symptoms, which makes it easier to spread than flu.

Clifflane3 (Apr 30, 2020 at 11:26)
@JohanG: yeah bud, this isn’t “just the flu” my wife is a pediatric icu nurse and she has multiple patients under 18 in PICU cause of it. The flu does not have a 2-3% mortality rate. While I do agree there needs to be opening of some business with proper protocols to ensure food and goods can be provided to the country. You mentality of this is just the flu is ignorant as all hell, and will lead to a worsening of this pandemic.

JohanG (Apr 30, 2020 at 12:58)
I also want to point out that when I'm forced to wear a mask by you deranged doomers, I wear a 3M P100 w/ custom 3d printed exit filter - far superior to the crappy and useless surgical masks i have no doubt all you other commenters wear to make yourselves feel better.

JohanG (Apr 30, 2020 at 13:03)
@dthomp325: it's been here since January. It wasn't a panic until hospitals figured out they could get federal money for every Covid case. Now all other causes of death like heart disease, stroke, etc.... have ran and hid. Here is the IL health minister telling you right to your face that non Covid causes of death are put as a Covid death: m.youtube.com/watch?v=KJSakjAivbU

matadorCE (Apr 30, 2020 at 13:58)
@JohanG: So you complain about having to wear a mask because you don't believe this stuff is any worse than the flu, but then when you do wear a mask you brag that it's much better than what regular people are wearing? Make up your mind. Or take your meds because it sounds like you're having an episode.

JohanG (May 1, 2020 at 4:59)
@matadorCE: I wear such a superior mask so I don't have to smell the stench of idiot doomers. Your mask is useless btw. All of this is a song and dance with no substance.

ckcbmrice (Apr 30, 2020 at 11:41)
I am so desperate that I would watch this. Can we get Zwift to do a quick update to add steering to a few more courses and then we can watch Annika get dropped because of her bike handling on Zwift too. Kidding Annika, love you.

tacklingdummy (Apr 30, 2020 at 12:05)
@ckcbmrice: It would be kinda interesting and kinda funny at the same time to watch the pros race on Zwift and also race against them. Perhaps they can organize something. It might be fun for the pros and amateurs.
Post a Comment