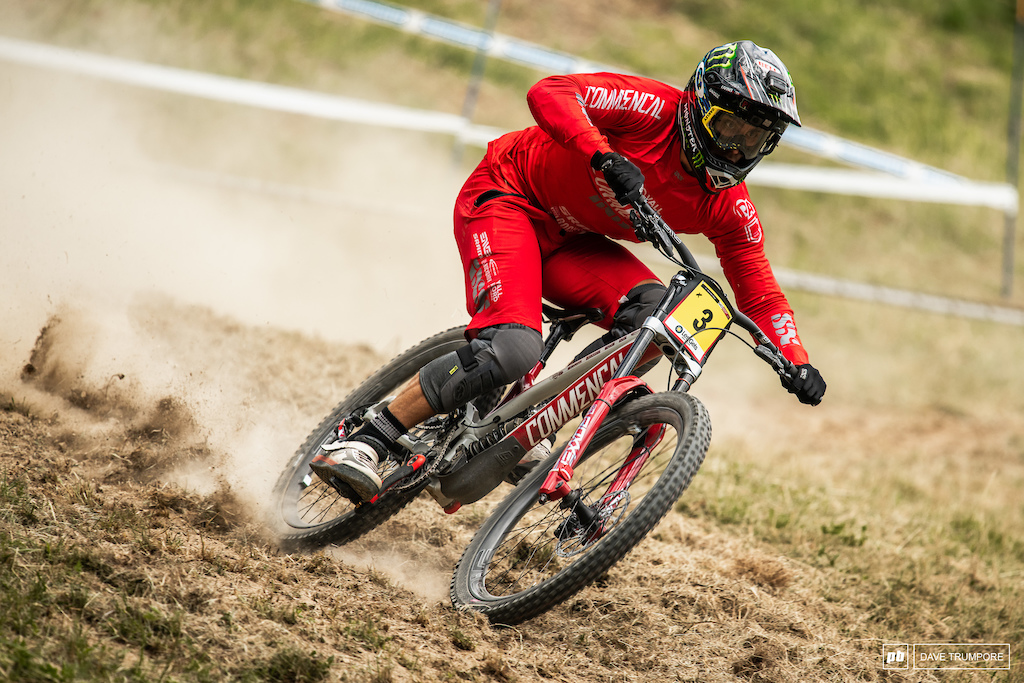 Amaury Pierron has announced on social media that he will be missing the French national championships after a nasty crash at yesterdays French Cup race at Alpe d'Huez.

The crash happened during Pierron's finals run and, after some worry about the nature of the injury following the race, he has revealed that so far he just needed some stitches in his hand and hopes to back to races as soon as possible.

We're wishing Amaury all the best with his recovery and hope to see him back on the bike soon.

Tmackstab (Aug 10, 2020 at 12:07)
Surprised there weren't more hand Injuries during quarantine to be honest

ryetoast (Aug 10, 2020 at 19:20)
Better that than a big injury, but there's something about the small, unimpressive injury that nonetheless keeps you off the bike that's really frustrating.

Also, as someone whose hand is still scabby and spitting out rocks five weeks after a similar injury, how about some better cut/puncture protection in MTB gloves?!

dkendy1 (Aug 10, 2020 at 16:11)
Sounds gruesome. Its never great to see your insides, the instant feeling of anguish like "oh f*ck this is going to take a while to heal". Poor bastard and a hand is going to be more worrying than a normal cut

ryetoast (Aug 10, 2020 at 19:13)
He just needs to tie a big spotlight to his handlebars, or better yet, replace them with one of those big LED bars for trucks, and it'll be fine!

miles4smiles (Aug 10, 2020 at 11:56)
If they were concerned about ligaments, it was probably a really deep gash. Maybe he lost a lot of blood. Maybe he smashed his head as well. Maybe he has not seen the inside of his hand before and was overwhelmed.

Probably the case! Cant handle a little blood and guts!

Three6ty (Aug 10, 2020 at 13:03)
@carlitouk: It's amazing how sensitive you guys are. Please take everything I say 100% serious without any sarcasm involved, and please over react.

blowmyfuse (Aug 10, 2020 at 14:34)
I've cut myself a million ways from Sunday. A piece of v shaped metal cut a spoonful of the meat in my calf one time. For whatever reason, looking down to see a pool of blood gather inside with distinct pieces of clean meat, fat & bone made my head spin.
I can see where thinking half your hand is filleted would do it.

kornbrot (Aug 10, 2020 at 15:09)
Would almost assume he is trying to say he knocked himself out for a second but chose the wrong word because English isn't his first language...

RonSauce (Aug 11, 2020 at 14:28)
The only time I have fainted from pain was during a hand surgery. There are so many nerves in your hands you can barely register it as pain as you sweat yourself into unconsciousness.

kornbrot (Aug 21, 2020 at 2:18)
Just listened to the Wyn Masters podcast with him. Turns out he is really just squeamish around blood and actually fainted. Who would have guessed...