by HI-Adventures
Views: 7,429    Faves: 29    Comments: 0
As I stand here in a bustling tapas bar in the old town of Granada, southern Spain, my head is working hard to process the adventure that’s just passed. Riding through the rich fabric of this tantalising country that revolves entirely around spending time with family and friends, sharing great food and a glass of wine at every opportunity… it’s an experience not to be missed. Over the past eight days we’ve circumnavigated the Sierra Nevada mountain range; eaten tapas in Granada town; had dinner with a local family in their hotel, washed down with wine grown on the hotel grounds; climbed to the highest town in Spain; pedalled through whitewashed mountain villages; slept in a luxury cave; and ridden some of the most sublime singletrack in Europe. 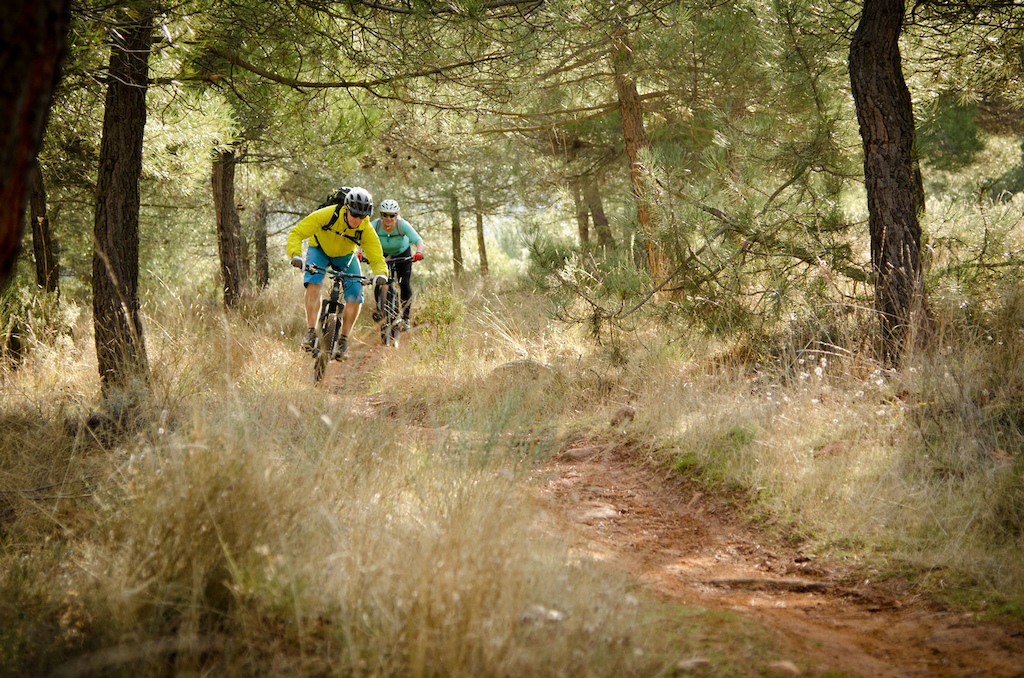 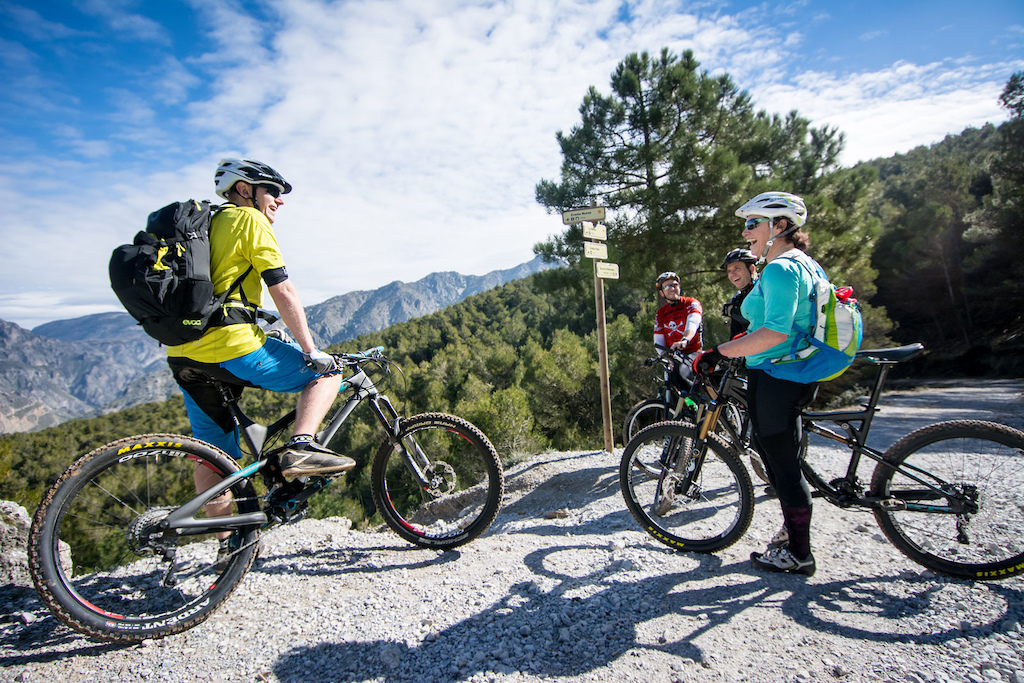 Our first day started with the perfect introduction to Spain, as we rolled out of town at around 9am in the shadows of the Sierra Nevada mountains, weaving our way through almond groves, until we turned uphill, and - BOOM! - the sun had breached the ridge to bathe us in the deep glow of morning sunlight.  We climbed through the trees on singletrack, punctuated by the occasional short descent, for around two hours until we popped out above the tree line, where we all stopped and took in the view without saying a word to each other. 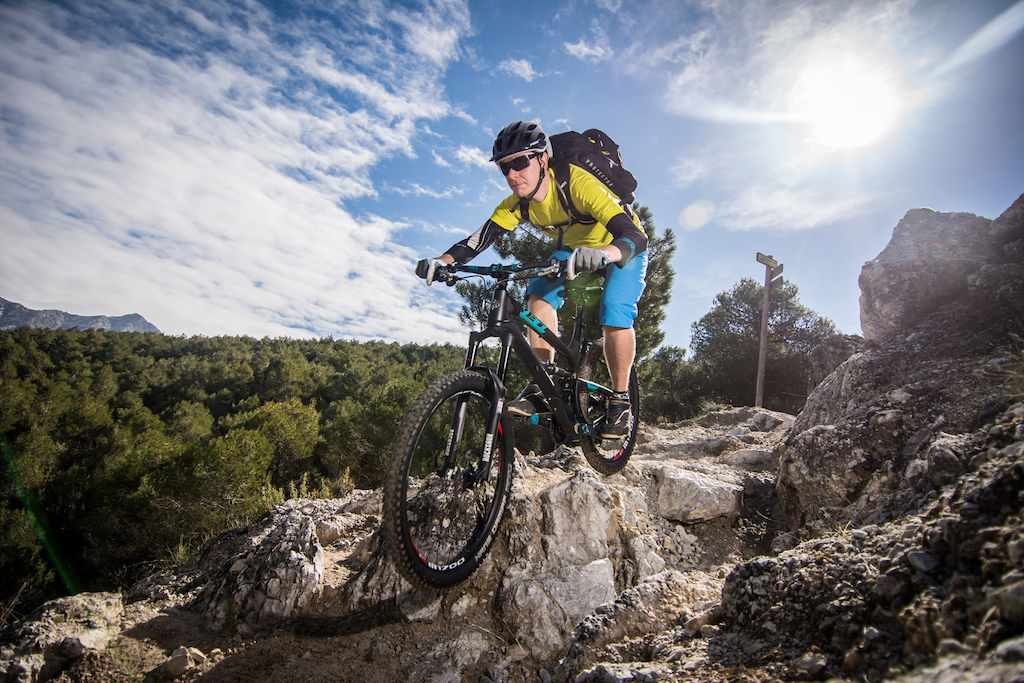 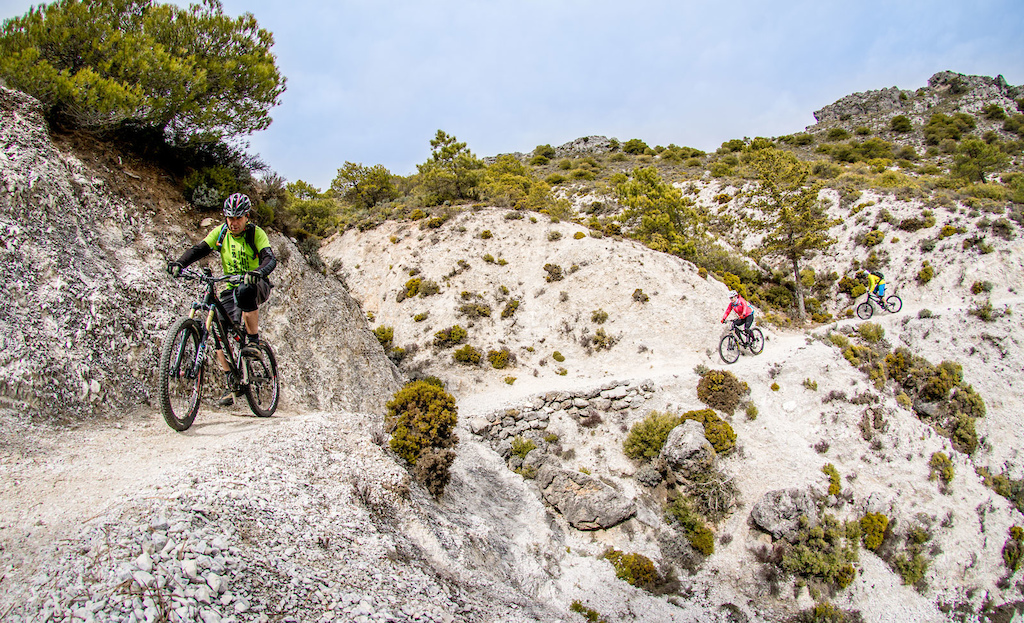 After a short lunch on the ridge, consisting of local sausage, bread, oranges, and chocolate, we set about tackling our first real descent of the tour.  I could go on about this, but instead I'll let your eyes go to work on the pictures and video and allow your imagination to fill in the details… 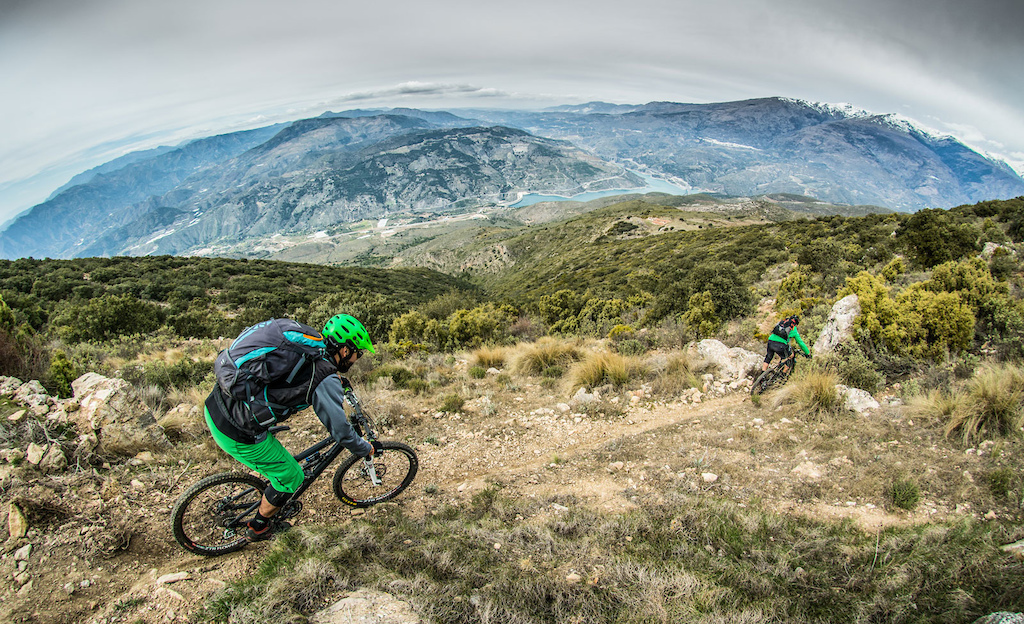 That first unforgettable day set the tone for what was to come, and day after day of this adventure, Andalucía continued to deliver the wide-eyed and big grin moments that mountain biking gives you when you’re exploring new territory. 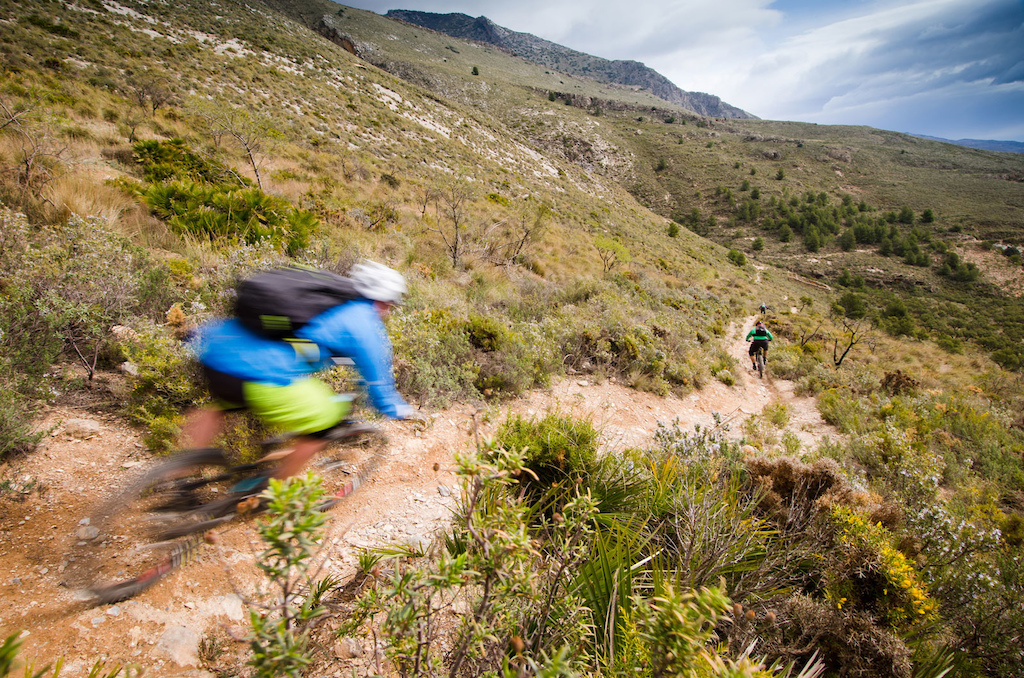 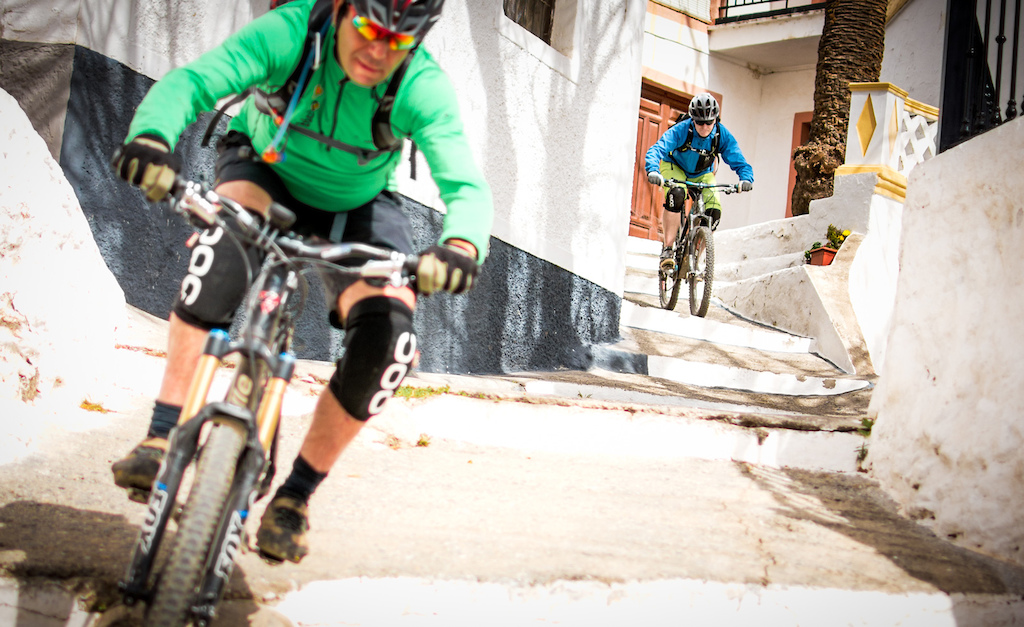 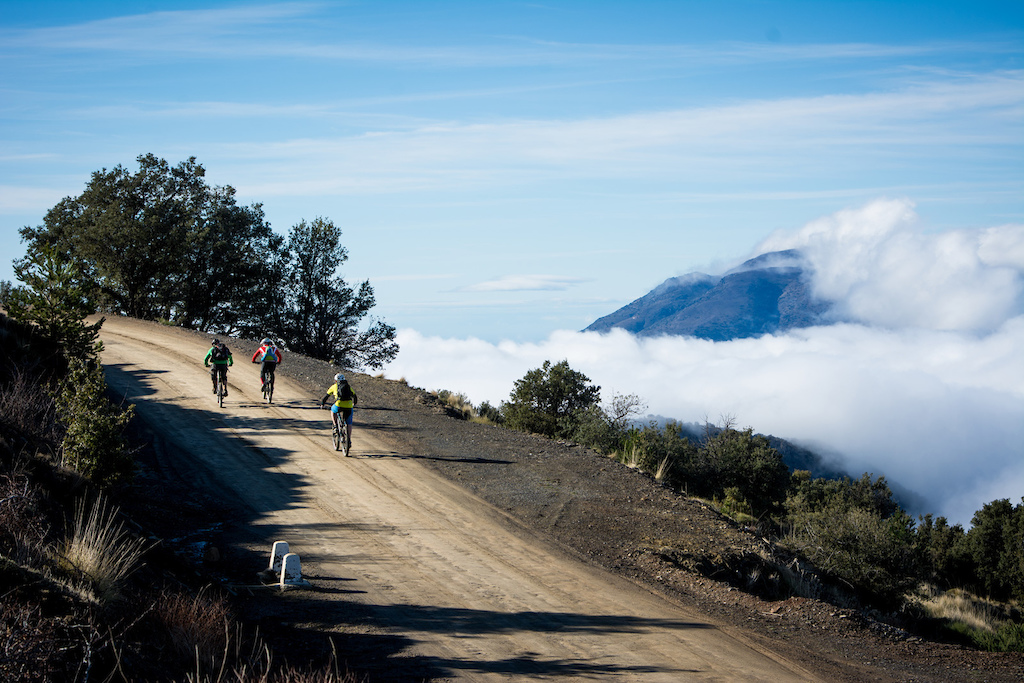 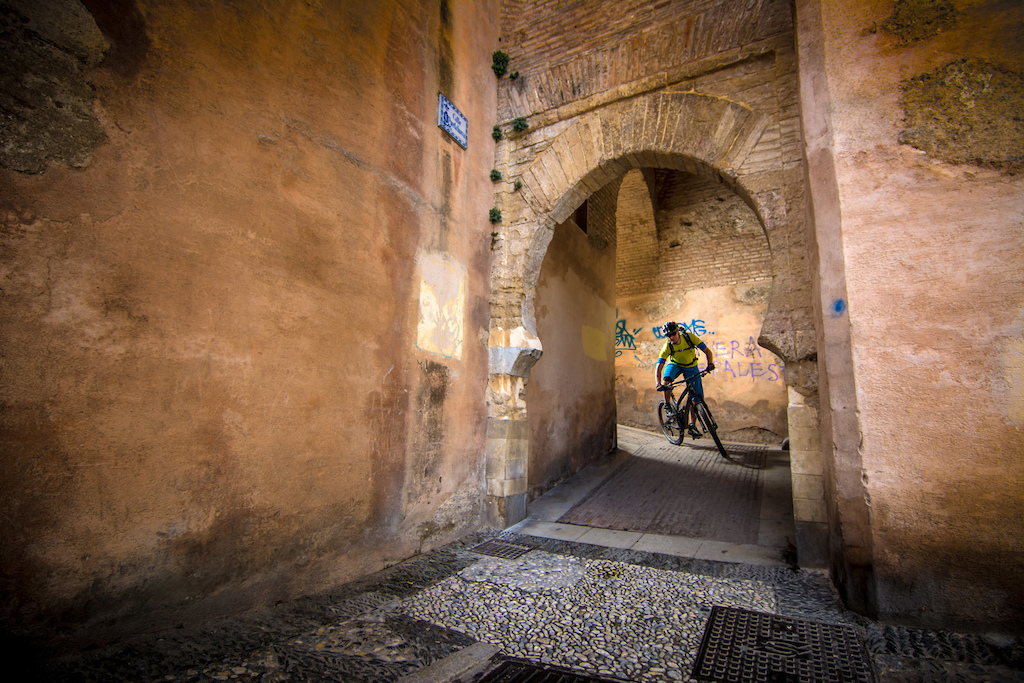 Riding is only half the story of any new destination and this mountain biking adventure is certainly no different.  Along the way we enjoyed a healthy slice of cultural experiences, food journeys and encounters with friendly locals. 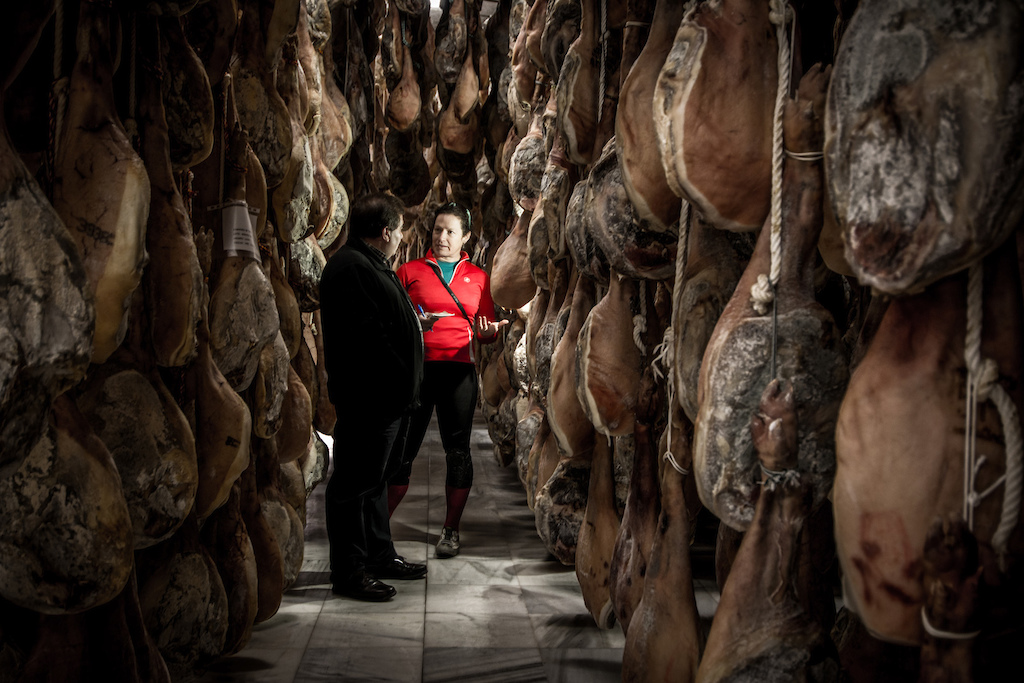 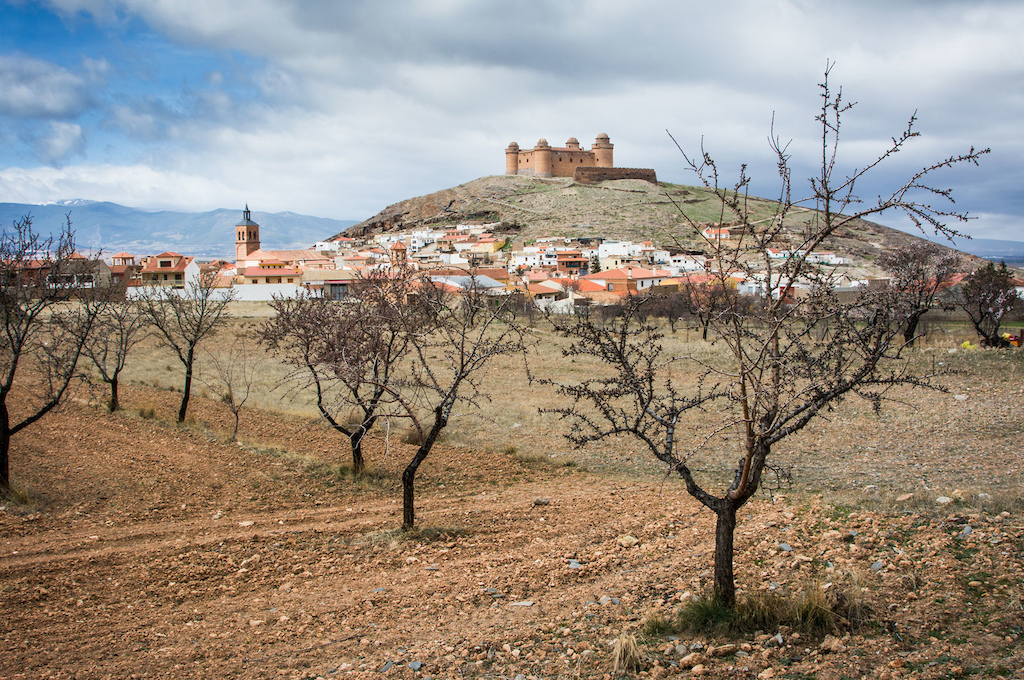 With such rich experiences to be savoured, we stretched out each day on the hills late into the evening sun.  On the last night before returning to Granada we couldn’t pull ourselves off the hill before the very last sliver of light was left in the sky - which made for an interesting descent!

So after a great week of trails, cultural interactions, food, and vistas, it was time to head home to share so many stories of an unforgettable mountain biking adventure in southern Spain. 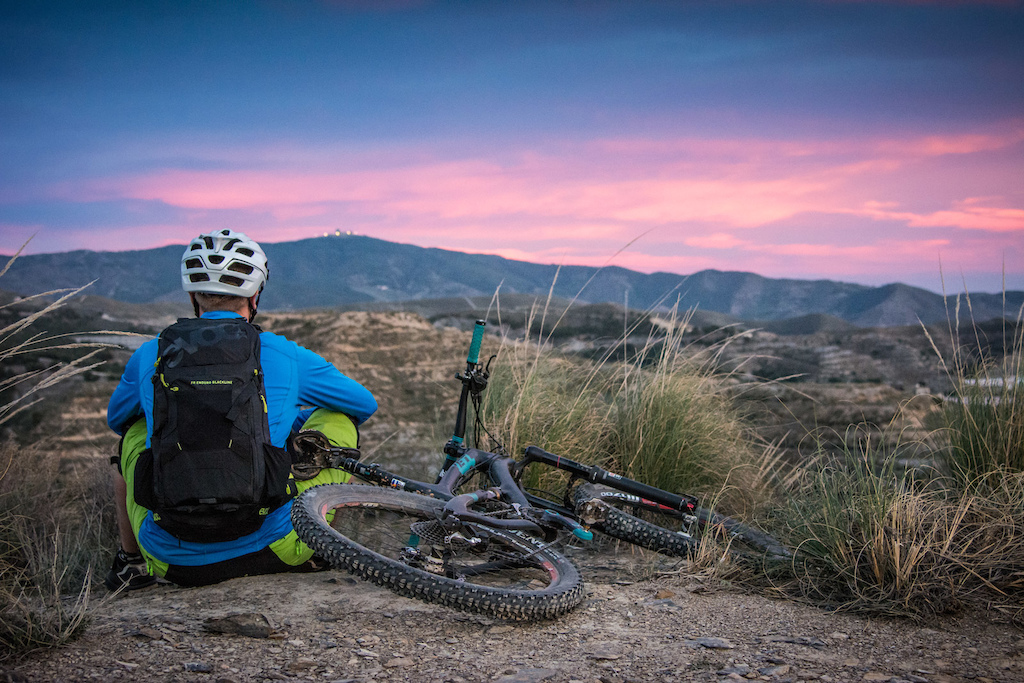 hifiandmtb (Aug 28, 2016 at 1:01)
Nice to see a truly stunning video which isn't only about shredding the tyres off the rims.

DJTC (Aug 28, 2016 at 2:17)
Just spent 3 months touring through Europe and Andalusia is up there with the very best places in the world as far as I'm concered. Epic mountains and coastline and Granada is an awesome city. Not to mention the endless stream of beautiful women. Now need to return with my mountain bike.

skinnybex (Aug 28, 2016 at 21:57)
I did a tour with H&I in Scotland this past July and they are without a doubt the best Mountain Bike Adventure company in the industry. Everything was top notch from the Guides and the daily trails that they have spent many months scouting out to the Safety and knowledge as well as coaching they help riders who are open minded and willing to improve their skills. Great meals as a group and excellent accommodations round out the experience.

I have 2 future trips already booked !!

gunners1 (Aug 28, 2016 at 9:05)
I went to Malaga and Granada for ten days about 3 years ago. Amazing places to visit, allot of really cool history/buildings.food /culture to experience. $100 cad return from gatwick too

KNSGTI (Aug 28, 2016 at 16:09)
This is awesome, I was just there a couple weeks ago, and I was surprised by how many Mtn bikers there were, after seeing this video I now know why. I can't wait to back, this time with my bike.

JL-oky (Aug 29, 2016 at 18:51)
All Andalusia is perfect for mountain bike and tourism. There is a fistful of cities (Granada, Córdoba, Málaga, Almería...) that are really amazing for both, riding an amazing route and ending it in its historical city centre.

coolskidz (Aug 30, 2016 at 4:28)
I came straight to the comments to see if anyone had anything to say about that. First thing I noticed.

JL-oky (Aug 29, 2016 at 17:36)
All Andalusia is perfect for mountain bike and tourism. There is a fistful of cities (Granada, Córdoba, Málaga, Almería...) that are really amazing for both, riding a amazing route ending it in a historical city centre.

HI-Adventures (Aug 30, 2016 at 1:04)
Certainly can't argue with @carlitouk
July and August are no fun for riding and even June can be testing unless you're a hot weather rider. You can get more details on this adventure via - www.mountainbikeworldwide.com/bike-tours/spain

carlitouk (Aug 30, 2016 at 8:38)
@HI-Adventures: Yep, I would totally agree, June is ok-ish if you are used to riding in the mid-thirties with no shade, if not avoid. Spring and autumn are incredible though. Even winter can bring its warm days in the mid to high teens.

szilyfreeride (Aug 29, 2016 at 2:14)
Been there 2 times and this summer, such a lovely place with really nice people. Gone return there as I can.