Join Pinkbike  Login
Day two kicked off high in the Andes once again with three stages in the morning and three in the afternoon. The stages were very physical and Nico Lau used these to his advantage, putting considerable time into race leader Fabien Barel. Fabien was strongest on the long and tech stages that play into his strengths as a DH racer and at the close of the day he was able to come out ahead by just 15 seconds.

The race then moved 3 hours south to Chilean wine country, New Santa Cruz for Day 3, which saw racers criss-crossing vineyards throughout the day on their liaison stages. The biggest factor was the heat which would reach 47C (116F) at the peak of the day, and with no shuttles up to stages it was an exhausting affair.

The morning started with a 400m climb and a short tech stage before riders climbed over 1000m in the heat to reach the second and final stage of the day. The effort was worth it and riders where rewarded with one of the best descents of the week down the other side.

Fabien once again proved his technical skills are some of the best in the business and extended his lead once again to almost 40 seconds by days end. In the women's race Florencia Espineira has been no match for the competition an she carries a lead in excess of 10 minutes into the final day.

In the evening to celebrate the final day in the big mountains before heading to the coast, the race organizers surprised racers by organizing exclusive private tours of the three wineries used through the day to link up all of the stages. 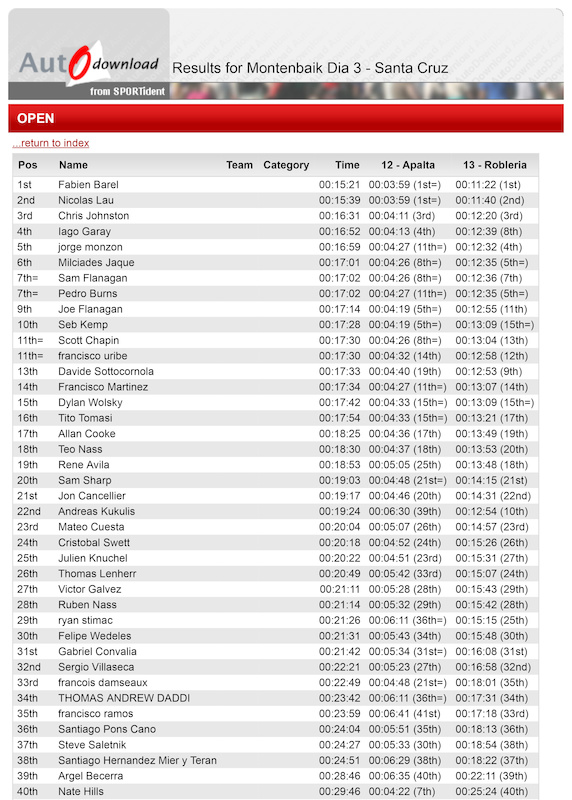 ergonbike (Feb 14, 2015 at 7:01)
Awesome to see Chris Johnston (The Nomads) having a great race, after nursing an elbow injury all last season. He's back on track!

davetrumpore (Feb 15, 2015 at 15:45)
@JoseBravo that forecast was good and all but every rider with a Garmin had a reading between 45c and 48c so I'll go with that as being more acurate than a forecast. At 8pm back at camp and in the evening shade it was still 34c.

JoseBravo (Feb 15, 2015 at 16:01)
Yeah man I agree with you, since the temperature that the forecast predict is "under the shadow" (I don't know how to properly say that in english)

karaknic (Feb 15, 2015 at 21:09)
You don't measure air temperature using a dark plastic device sitting in the sun. Nevertheless 37 degrees is pretty damn hot, anything over 35 and it's no longer fun. I have actually ridden in true 47 degree air temperature (check out Leonora, Western Australia, 9th January 2013) and it feels like you're slowly suffocating, getting very light headed and slightly disoriented within 10-15 minutes.

Coppermine (Feb 14, 2015 at 11:20)
Pinkbike, please stop torment me with those pics, I can't stand looking at great bikes, great views (some say epic, but I hate the career this word made), outside my window I can see late winter views and my knees are screaming for medical treatment after (how stupid I was) I overworked them last season. I can't ride, just wait until pills and medical treatment bring relief and I will be able to ride again.

miketizzle (Feb 14, 2015 at 6:41)
Another awesome set of photos. Dave @davetrump you have come up trumps again

nilswalk (Feb 14, 2015 at 20:08)
No kidding! The quality of the photography PB serves up daily is top-notch. That shot by Sam Needham of the rider in the forest with all the motion blur is brilliant.

WAKIdesigns (Feb 14, 2015 at 7:59)
I've seen thousands of enduro specific whines but most of them taste like a really poor joke