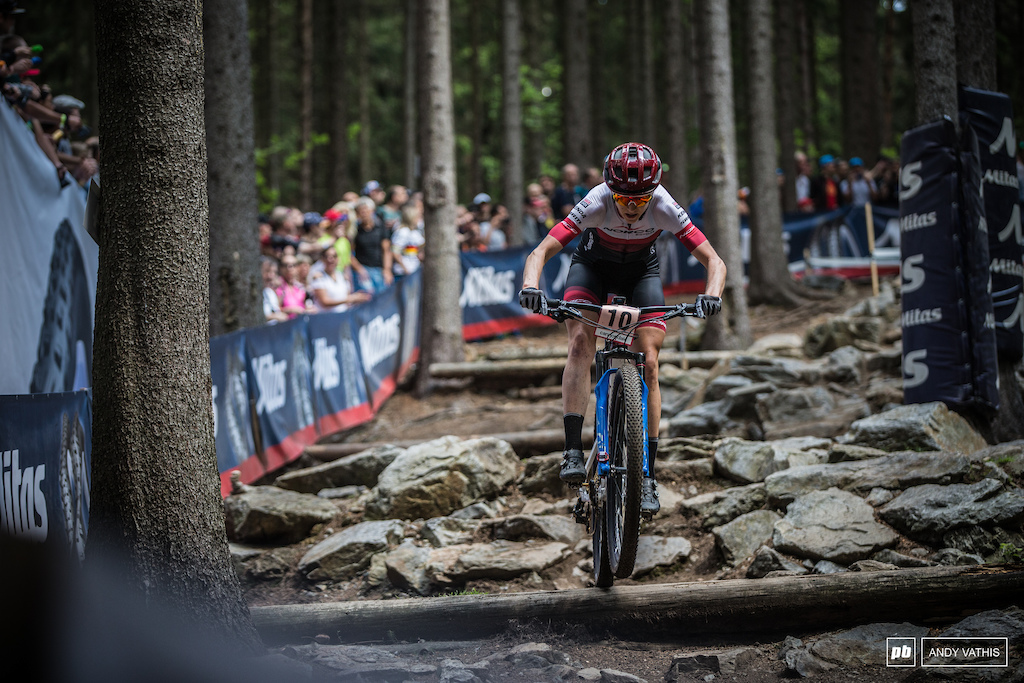 Haley Smith earned her first UCI World Cup podium in third and the fastest lap time in the Women's field in Nove Mesto this year.

Andréane Lanthier Nadeau and Haley Smith have been racing mountain bikes for over a decade and used to race against each other on the World Cup and Canada Cup circuit. Since 2015, their paths have diverged, with Lanthier Nadeau now racing enduro while Smith continues to compete in Olympic cross-country.

Despite not competing in the same discipline anymore, they have both risen to the highest level of the sport. Lanthier Nadeau finished third overall in Enduro World Series standings this year while Smith started in the first row at the Mont-Sainte-Anne XC World Championships after a breakout season where she finished third in Nove Mesto. 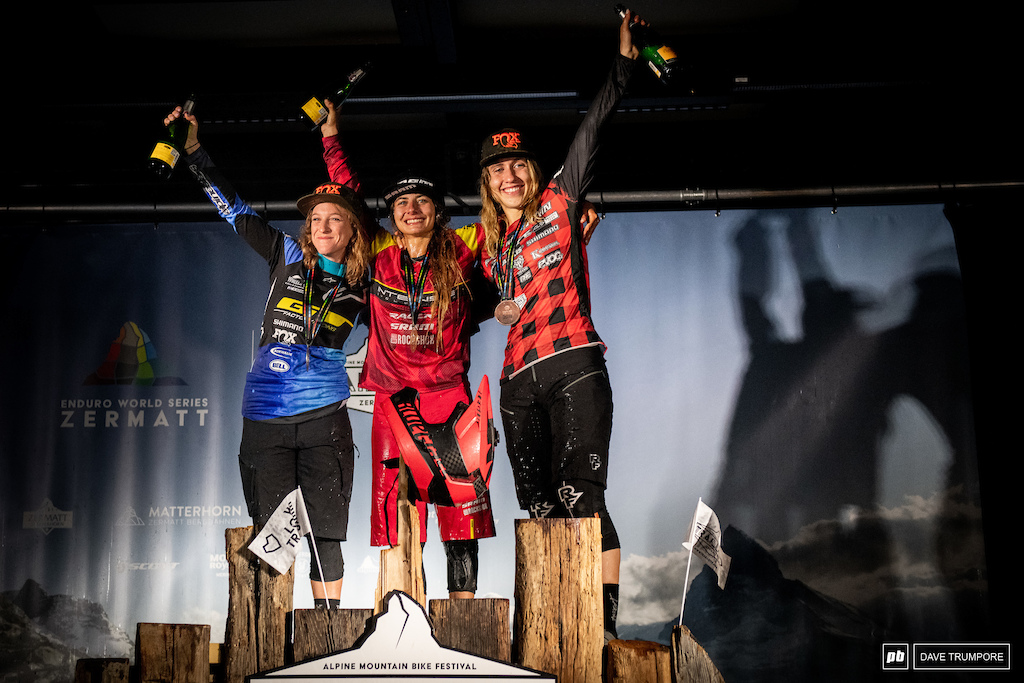 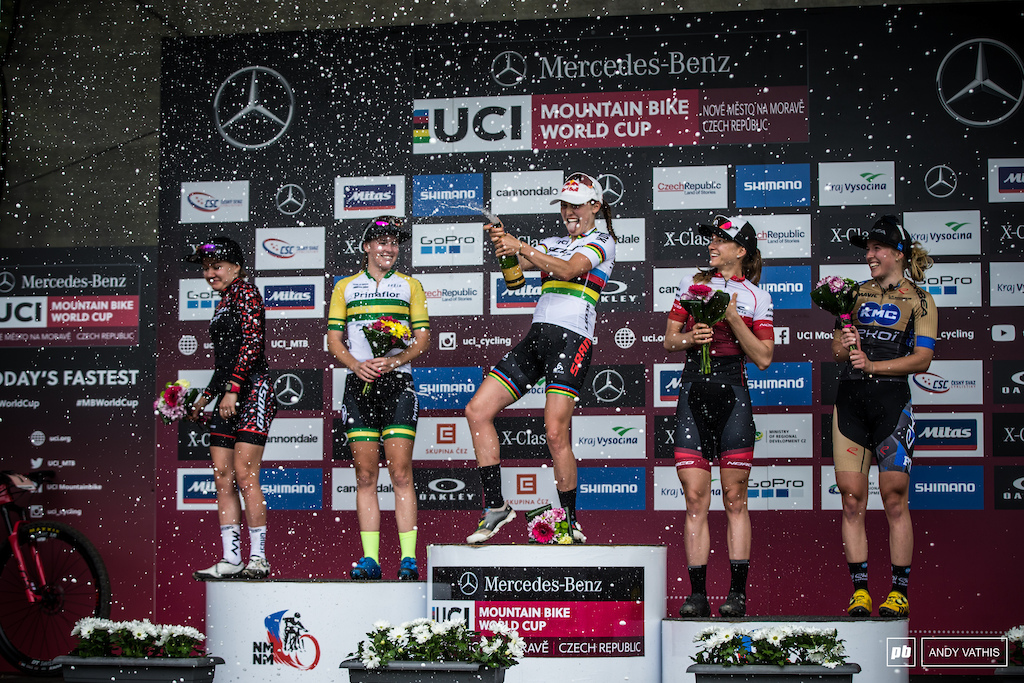 Lanthier Nadeau was at Mont-Sainte-Anne during the 2019 World Championships where she helped some of the Canadian team in an unofficial role as a technical coach. Instead of being her competition, Haley Smith was one of the athletes that she gave pointers to on the technical XC course. 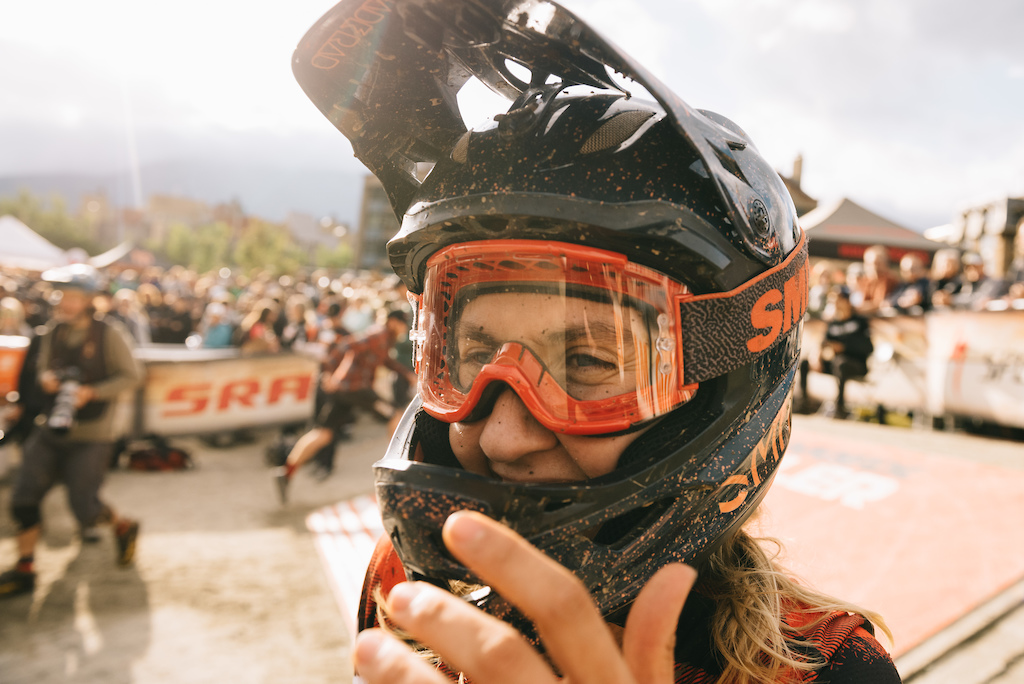 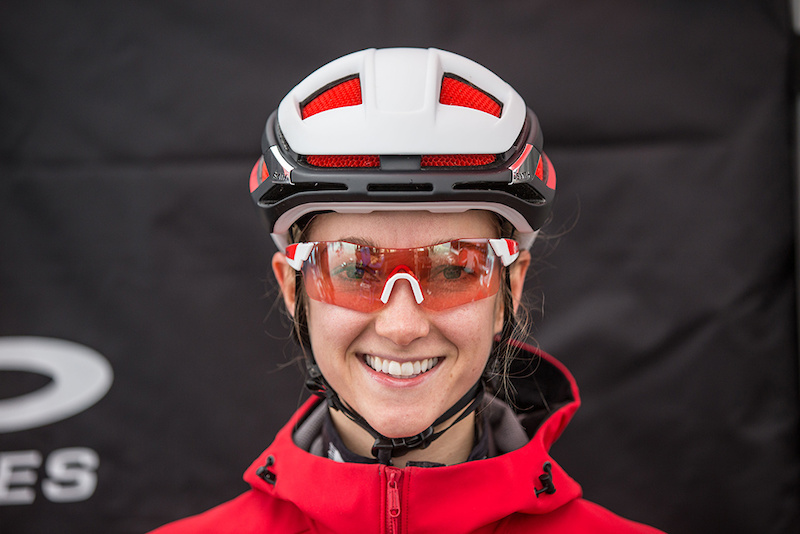 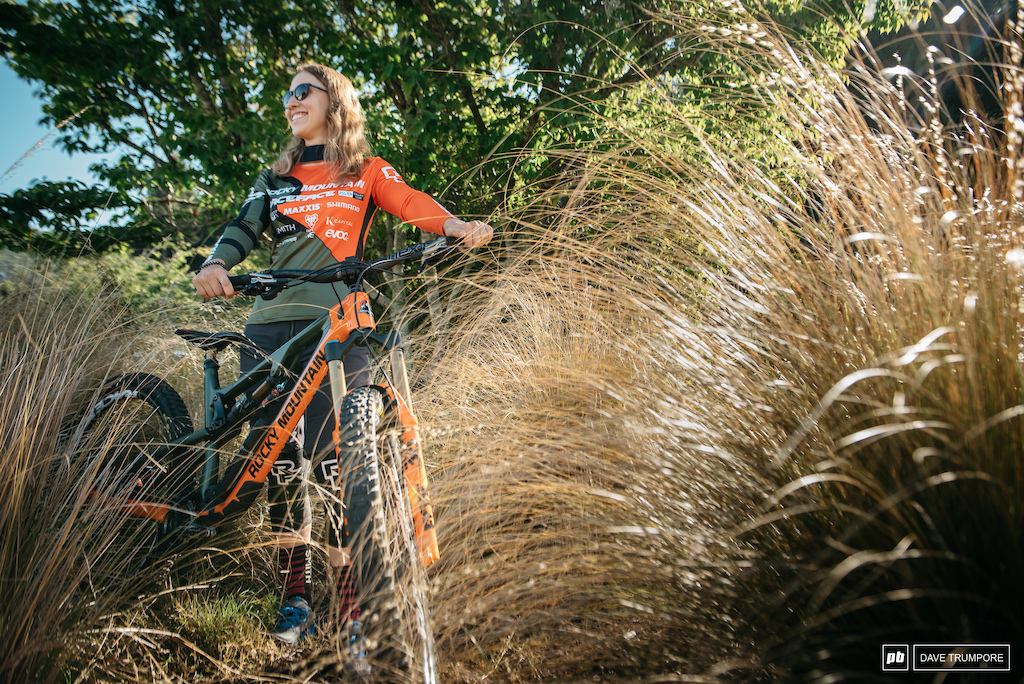 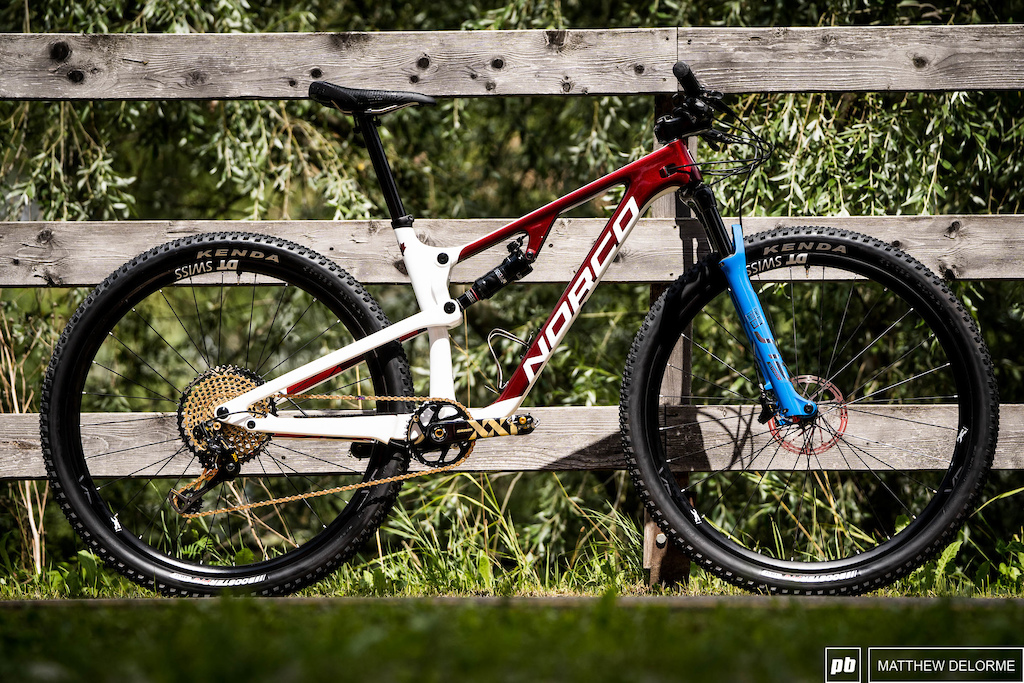 There's no denying that the tools are different.

Since she's competed on the world circuit in both enduro and XC, I asked Lanthier Nadeau what she thinks the main differences are between the two disciplines. She said it comes down to working with a different tool and a different type of trail, but it also requires a different kind of heart. 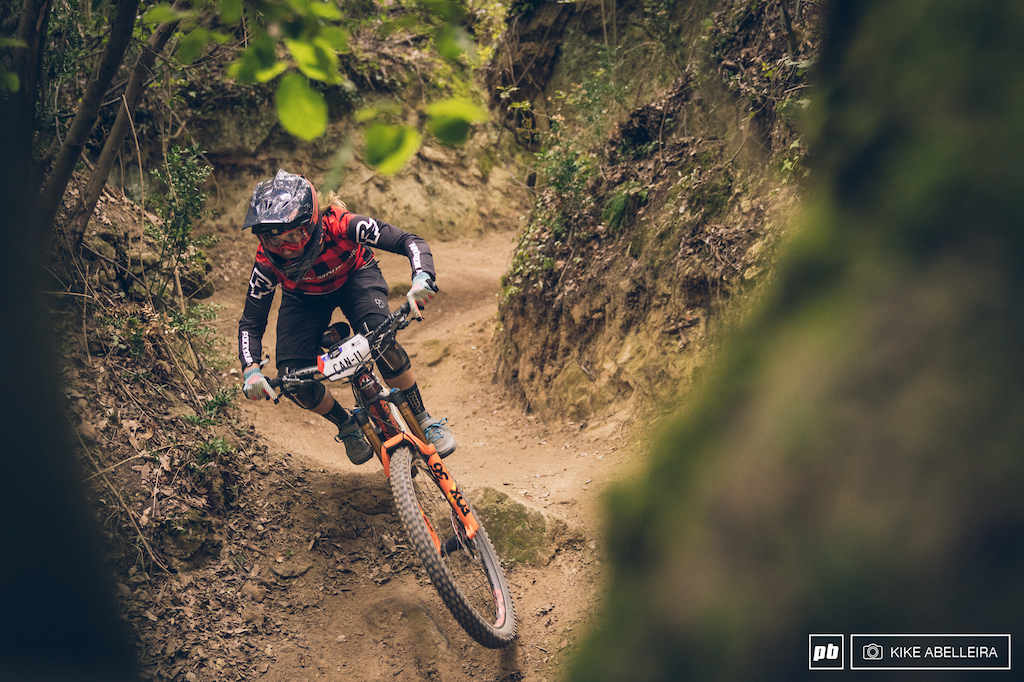 Andréane Lanthier Nadeau leading Team Canada to a bronze medal at the Trophy of Nations this year.

The last time Lanthier Nadeau raced the Mont-Sainte-Anne World Cup was in 2015, before heading to Whistler to compete in her first-ever Enduro World Series event, skipping the Windham World Cup XC. A fourth place on the first stage on a borrowed enduro bike before a crash forced her to pull out of the race showed that she had raw talent. I asked why she thought she was such a strong technical rider despite still being an XC racer in 2015. 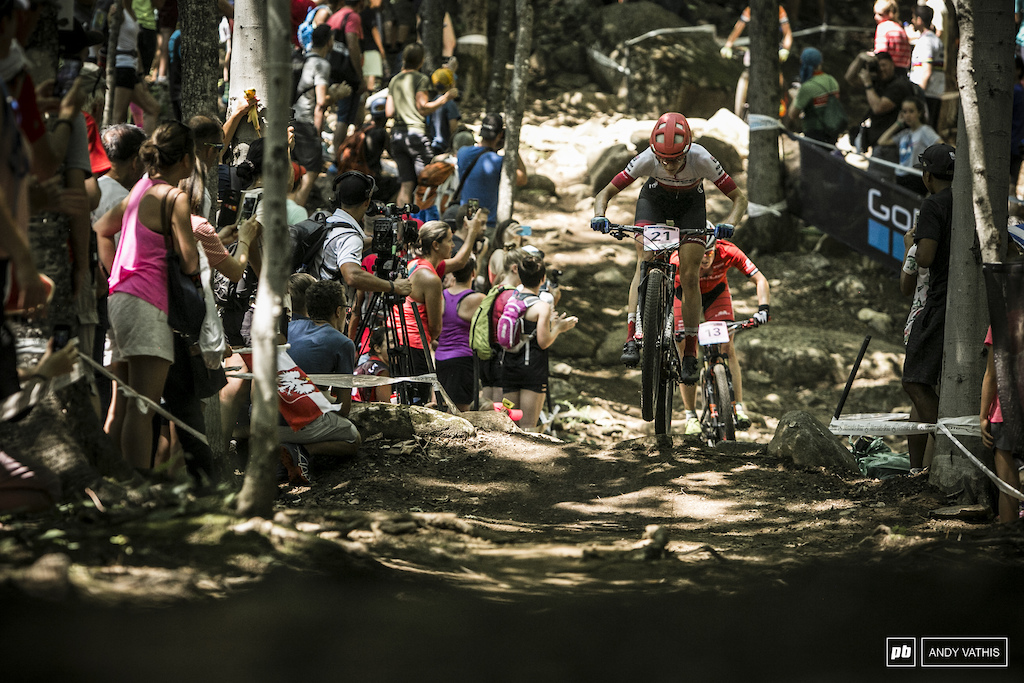 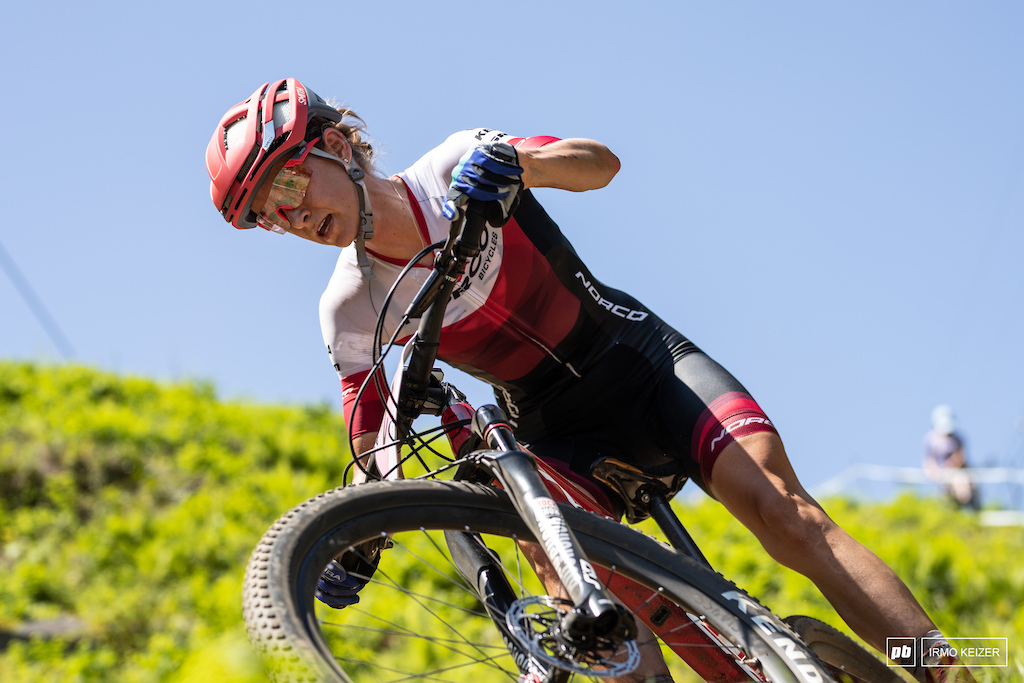 Smith said that Lanthier Nadeau always had strong technical skills and that that helped her develop her own skills. The two spent many hours in Victoria, BC training together. 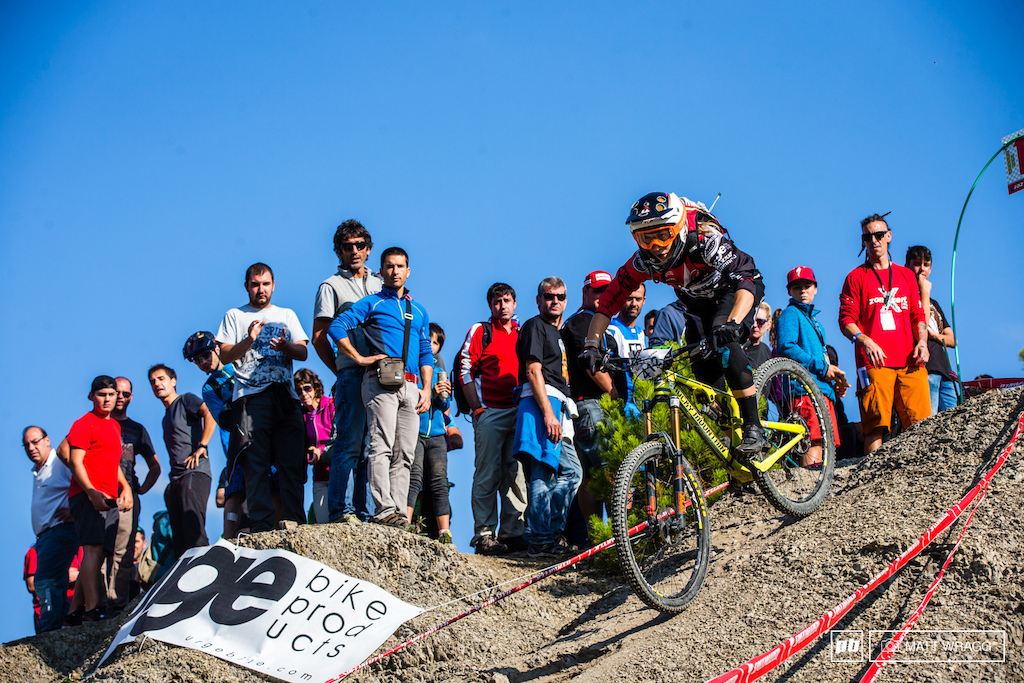 Andréane Lanthier Nadeau in Ainsa, Spain in 2015 in the first EWS race that she finished. When the dust settled, she was just off the podium in 4th.

Of course, I had to ask Lanthier Nadeau how she thinks her skills would compare to the top female XC racers on the circuit. Jolanda Neff is praised on every broadcast for her technical skills and it would be interesting to see how she would perform in an enduro event.


As Lanthier Nadeau knows, that learning curve from XC to enduro racer can be difficult and hers came with several injuries. This year was the first time she was able to race in every single round of the Enduro World Series. 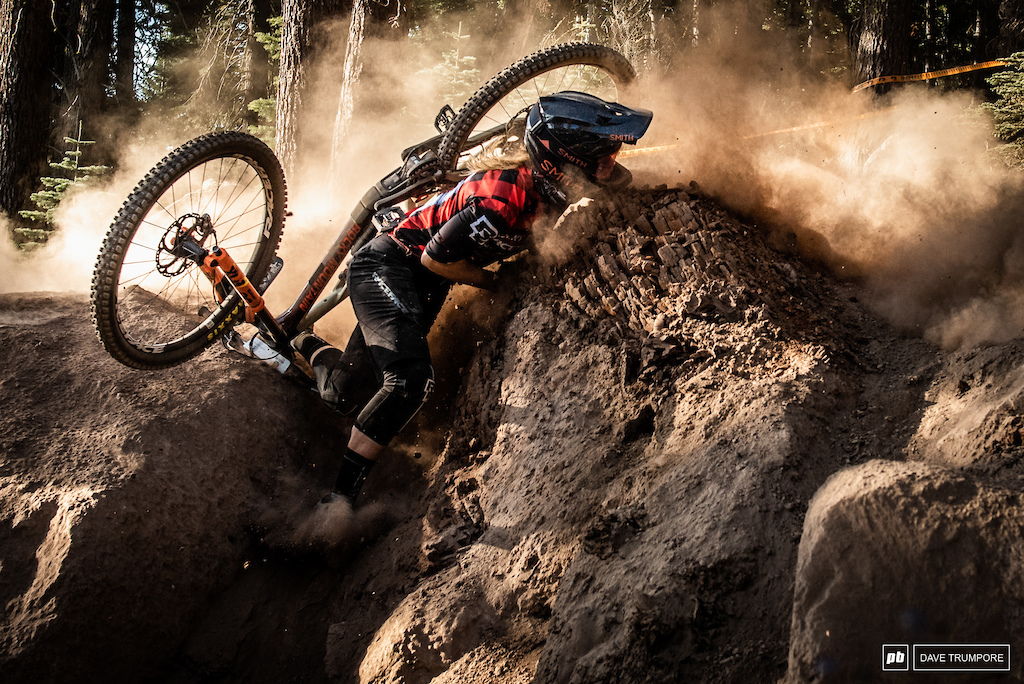 ALN finding the limits at the Northstar EWS this year. 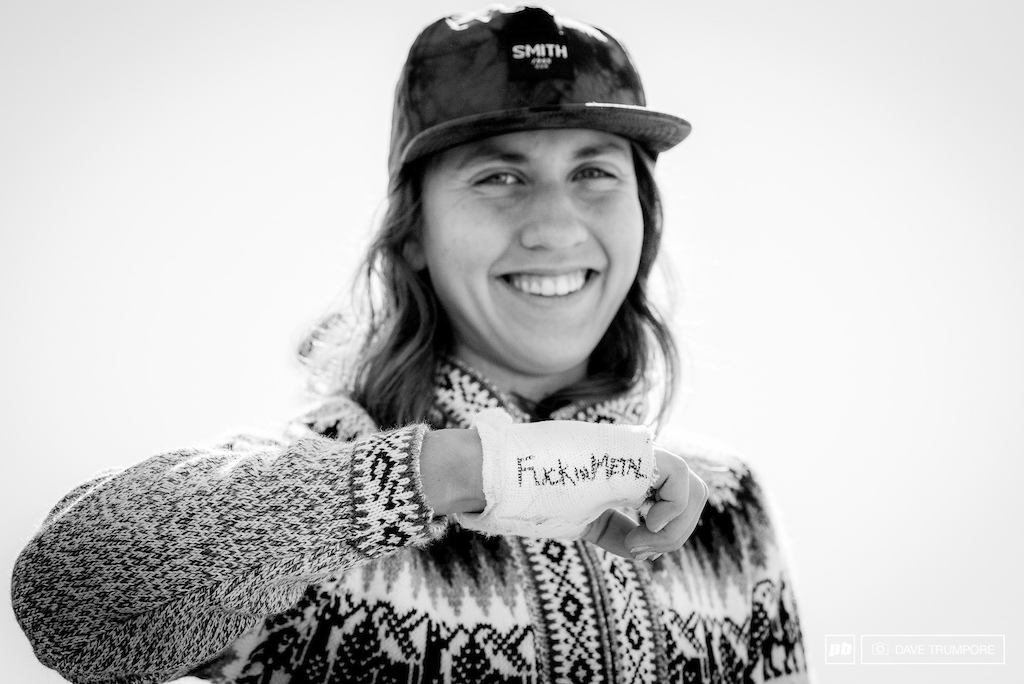 ALN sitting out two rounds in 2016 with a hand injury.

I asked Smith about why she thinks we've seen fewer injuries on the XC circuit compared to the EWS or DH circuit, despite the courses evolving at a rapid rate. Now, more than ever, being a strong technical rider is an important part of winning cross-country mountain bike races. It isn't enough to have a strong power to weight ratio, you have to be able to jump, do drops, and navigate tricky technical climbs and descents. 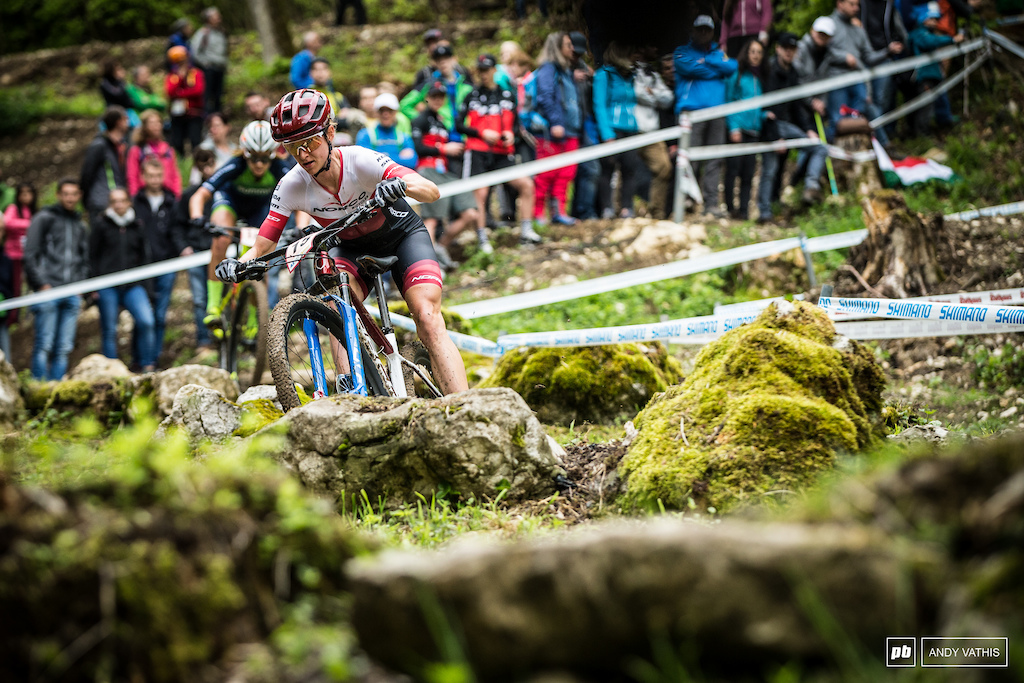 As for Smith, she no longer feels that her technical skills are a weakness for her on the race course thanks to those winters in Victoria, BC alongside Lanthier Nadeau and a mindfulness practice.


With three top-ten results on the XC World Cup circuit and a bronze medal in Nove Mesto, I had to ask Haley Smith what she thinks it comes down to. What makes a good cross-country racer? She's been improving gradually year after year, how did she win the medal? 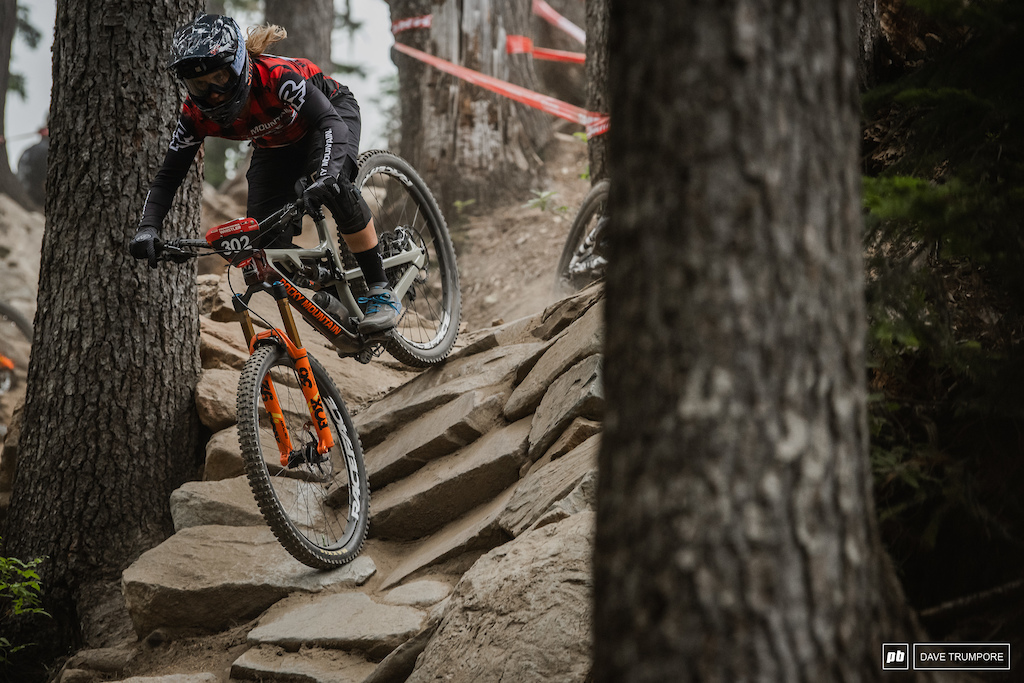 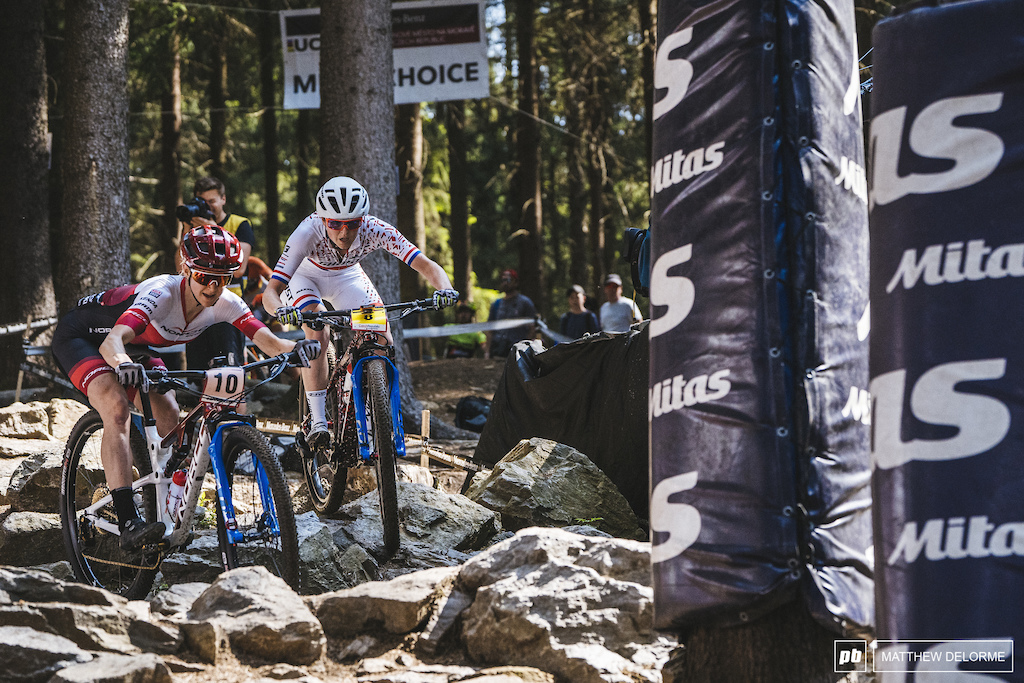 For both riders, doing a lap of the Mont-Sainte-Anne World Championships course was a special moment. Haley Smith came off a tough second half of the season where she felt the fatigue of an insane year of travel after not being in the same place for more than two weeks at a time since October of last year, to finish 12th. 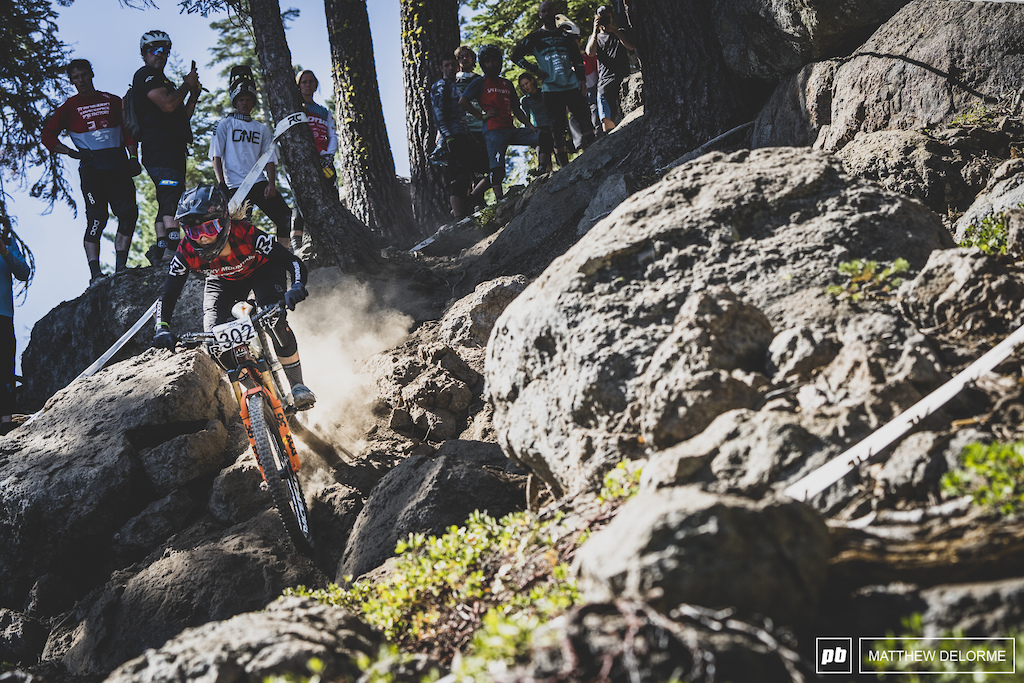 To conclude, I asked Smith what her goals are for the next season.


We wish Haley Smith and Andréane Lanthier Nadeau all the best in the coming year.

fullfacemike (Oct 11, 2019 at 1:13)
It's crazy how we can all put on spandex and line up together week after week but still keep each other at arm's length. This is a super cool story.

showmethemountains (Oct 11, 2019 at 10:22)
@endlessblockades: Yes, it was a thing before the UCI officially banned skinsuits. Take a look at what Sam Hill was wearing at that infamous last corner crash

And here is the picture you've always dreamed of but didn't know existed: Ben Cathro in skin-tight pants: www.pinkbike.com/photo/2800528

suspended-flesh (Oct 11, 2019 at 12:23)
@showmethemountains: Yikes! I was referring fullfacemike's username and spandex remark. Yes I remember the plum-smuggling era. Not a fan. Seems like we are heading back that way with Loris' Fox trousers

fullfacemike (Oct 11, 2019 at 12:32)
@endlessblockades @showmethemountains I wish I was as cool as Ben Cathro or raced DH at all. No, long story short I did race XC in a full face my first season and ended up with this sweet nickname. It was the only helmet I had and the budget was tight. So tight that I didn't even actually have spandex, I raced in our team t-shirt.

DoisforDonuts (Oct 11, 2019 at 2:58)
Great article. Just on Alan's comment on there hasn't yet been a top XC racer transition to Pro Enduro, I would have thought Cecile Ravanel was an XC Elite rider? But yes now I am curious as ever at how Nino Schurter, Jolanda Neff & the likes would do on the EWS circuit.

cool3 (Oct 11, 2019 at 5:33)
I think Nino would be in the top-tier. Just watch him shred with the top DH racers... The guy has technical skills many of us would dream of. And he can also hold his own on top level pro road races. I would be curious to see him on an EWS.

taprider (Oct 11, 2019 at 7:23)
If EWS paid better and/or had more secondary benefits, some XCers and even some roadies would go "all in" for Enduro and do well. But, at this point in their careers, anyone at the top level of their chosen sport, would have to sacrifice time/results transitioning to a different sport. Basically most racers at a top level of any sport could probably have chosen a different sport when they were still developing, and still have done equally well (with some exceptions for those with extreme body types/abilities).

Dropthedebt (Oct 13, 2019 at 10:16)
In all seriousness I believe Jolanda would dominate after a taster season. She has incredible skills on her bike beyond XC.

Vertti83 (Oct 11, 2019 at 3:45)
How about the other way around; pro enduro racer on WC XC..? I think Grubby has done quite well on some Australian national XC races, but are there some others maybe too..?