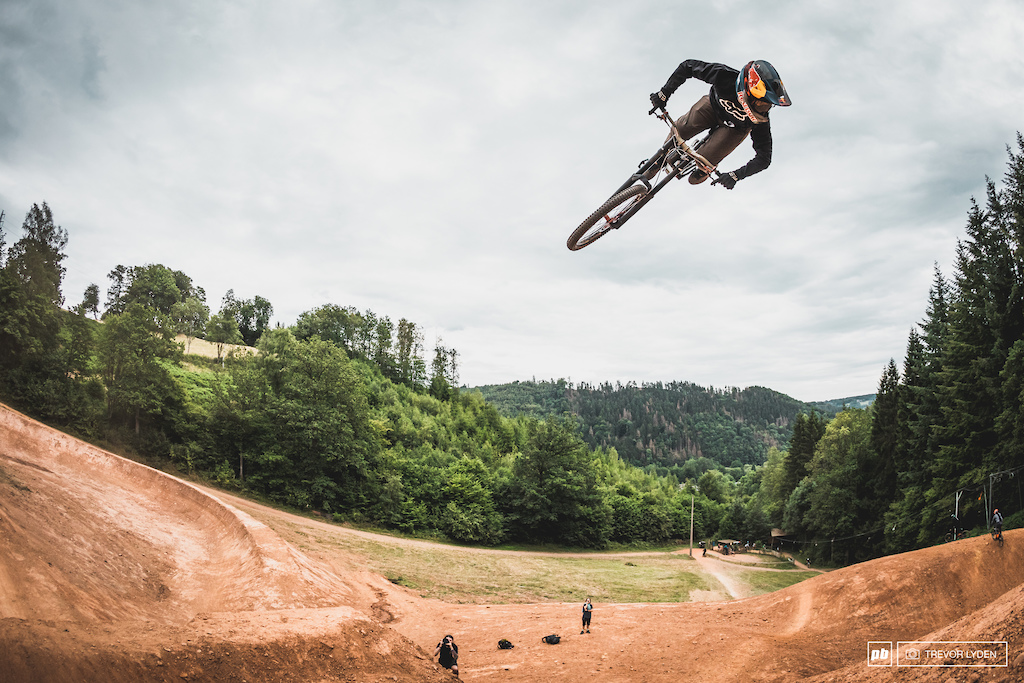 Andreu Lacondeguy has today announced he will be leaving YT Industries after 8 years with the brand. Andreu won YT their first and only Rampage title in 2014 and has been on the podium twice more since then, he was also a pioneer in the FEST series that has been a transformative force in freeride mountain biking.


We'll update you with more news on Andreu's new sponsors as we get it.

chriskneeland (Dec 26, 2019 at 7:40)
Nico and Andreu start a freeride bike company that only have 26 inch wheels. They can take my money now.

chriskneeland (Dec 30, 2019 at 5:39)
@Zeeroone: I currently ride one. It's by far the best freeride bike I've ever owned. The thing rides like a long travel slopestyle bike the way I have it set up. Fortunately there are enough of them out there I can grab one relatively cheap if I ever need another one. They're a hidden gem for sure.

robito (Dec 26, 2019 at 11:01)
Didn’t see this change coming. He definitely had a great run on YT. I hope his next sponsor makes 26s for the rest of us to get on. Definitely curious to see where he lands.

theronsta (Dec 26, 2019 at 13:11) (Below Threshold)
How so? They’ve been dumping their older riders to better suit their name, YOUNG talent

suspended-flesh (Dec 26, 2019 at 13:25)
@theronsta: maybe his new FMX sponsor requires exclusivity. If you saw his IG stories you can see there are other goals afoot.

tacklingdummy (Dec 26, 2019 at 12:36)
YT seems to be cutting all their high profile riders and going to much less known riders.

sino428 (Dec 26, 2019 at 13:06)
just speculation but it could be they just can’t afford these guys anymore. They were a very young company that jumped in head first and made very big investments in top riders. They landed the top DH racer, along with a bunch of very high profile free riders as well like zink and Andreu. These upfront investments just may not have paid off. By all accounts they make a good bike, but are there really enough YTs out there for their revenue numbers to be able support a stable of the top riders. It never really seemed to and it may now just be catching up with them.

suspended-flesh (Dec 26, 2019 at 13:36)
@sino428: Pro athletes are always on the hunt for a better deal. If you are one of the world’s best at what you do, you change teams or build your own. I believe he is going to focus more on moto-related shredding, however.

Ttimer (Dec 26, 2019 at 14:54)
@sino428: It could also be the other way round: When they were a young, not so well known company (in North America at least), they needed top athletes to generate publicity. Now that everyone and their dog knows who YT is and what they sell, other types of advertising might be more effective.

tacklingdummy (Dec 26, 2019 at 18:24)
@sino428: I think they just figured out that they don't have to sponsor big name riders to sell a lot of bikes and make lots of money. They tapped into the best strategy for selling bikes: Sell excellent bikes directly at much lower prices. Their only issue is to keep up with demand. They are always sold out of common sizes. The 2020s are coming though.

lccomz (Dec 26, 2019 at 19:05)
While YT has a strong image among a certain segment of riders, maybe the company is suffering from availability issues (seems like many of their models and sizes are eternally out of stock), being near the back of the line at production facilities, etc. and isn’t actually as profitable as their image may suggest? Just speculation here.

tacklingdummy (Dec 26, 2019 at 23:48)
@bonfire: Perhaps. However, they moved to a much more expensive area (San Clemente), so I'm thinking they are doing better. Just speculating though.

lou-talks-mtb (Dec 27, 2019 at 12:59)
they land some high-profile riders to show what the bikes can do - and now they promote their young-talent - if they stay true to what they claim, it's a bike that can win wcs for around 5k, affordable to everyone - then again, i'm totally biased as i absolutely love the bike and the brand and the ideals behind it - the "live uncaged" video will never leave my watch-later playlist

gmedwedrich (Dec 30, 2019 at 5:38)
I fugging love this guy!! goodluck with the next chapter you're a legend.. still remember you in NWD!! and then the first time I ever saw this dude in person was close to the step up he double flipped HAHA FUCK YEAH KEEP SHREDDING

rcmalinchak (Dec 27, 2019 at 6:21)
@chacou: if you read between the lines, he never actually says he’s leaving Pivot, just thankful for his time there, etc. Eddie is a known prankster and likely just messing with everyone. Possibly the reason Pinkbike didn’t make a post about it.

chacou (Dec 27, 2019 at 7:29)
@rcmalinchak: yeah, upon further reflection on this he's probably trolling, maybe the "more news to come in the new year" is going to be Pivot pro model riding slippers, hemp thongs on recycled rubber soles

dirtbagluvin (Dec 29, 2019 at 9:21)
@owlie: I wouldn't pass judgement so fast. Special tunes for rampage is obvious. They feel locked out. That being said the wreckoning with a push is insanely capable as is Aggy. If you understand the consequences of crashing hard at rampage and having to come back time and time again you wouldn't judge someone for not taking their second run.

Fifty50Grip (Dec 26, 2019 at 12:38)
Fuk YT, and fuk your thumbs down. YT is a trash brand that does not give two shyts about non winning riders, if you are not young and producing wins your canned.

Staktup (Dec 26, 2019 at 13:20)
If what you say is true, maybe we should respect their consistent approach to their moniker, Young Talent. You know what you sign up for as a rider. Must produce some solid results during your youth and as you peak. Then, look for greener pastures. No hidden agenda.... just playing devil's advocate here. Kinda like racism as I tell my son. I'd rather know who is a confederate flag-waving KKK aficionado vs. someone I thought was my friend an neighbor, only to find out he or she is a closet racist and does me wrong behind my back.