Join Pinkbike  Login
79 Comments
In July of 2015, at the Samoens Enduro World Series race, Anne-Caroline Chausson suddenly quit the race and disappeared from view. Anne had not been feeling right for quite some time and had an MRI before the race. When she returned to the doctor the following week, she found out that she had Ovarian cancer.

After a long fall and winter of operations, surprises and chemo, ACC is on the road to recovery. We caught up with Anne at her home in Southern France in mid-March, 2016. Here is her story. 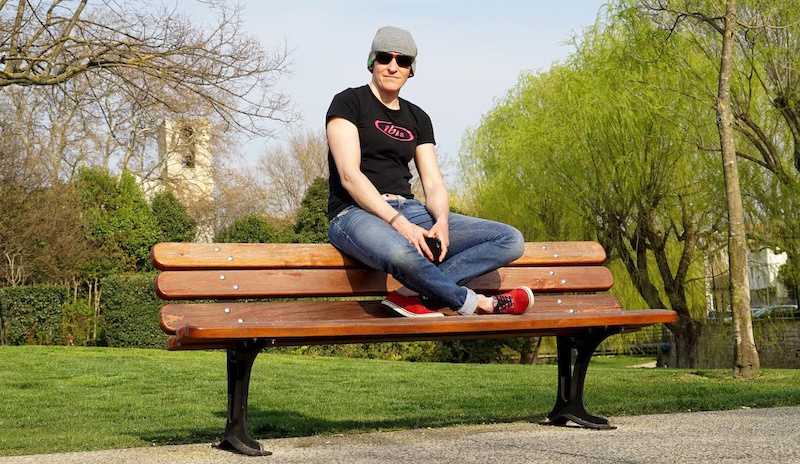 How did you find out you had cancer?
During the winter of 2014/2015, sometimes I had painful stomach aches. I went through periods of feeling great and periods of fatigue. But I was not too worried about it. In late March, I went to New Zealand and I won the first round of the Enduro World Series. The return was difficult and I was slow to recover. In late May, during the round in Scotland, I was tired, I had a stomach ache and I was not feeling well. When I returned home to France, I could not recover. I thought it was because of overtraining. Then I decided to do a blood test. We saw that there was a lack of red blood cells, which is quite surprising for an athlete. Then in late June, I raced the Coupe de France of Enduro in Millau. I won, but I was very, very tired. When back, I did an MRI. While waiting for the results, I went to the EWS mid-July in Samoens. I left because I was not really good. Then I got the MRI results. At the hospital, the doctor warned me that I had a tumor to be removed. But nothing more.

And?
In late July, the tumor had grown rapidly. It was decided to operate in early August. During the surgery, they saw that it was more serious than it appeared. We decided for a second operation in early September, just to give me time to recover from the 1st. I started chemotherapy in early October. The day after the chemo, Tom (Tom Morgan from Ibis) came to see me. We went for a walk towards the Dentelles of Montmirail. I was tired, I had back pain and trouble to breathe. I thought it was because of the chemo. I spent 10 days feeling like this. One day I went to the mountains. There, I could not breathe. We went to the emergency room and I was diagnosed with a pneumothorax [collapsed lung], which was not caused by the chemo. It was the icing on the cake!

Have you had already one?
Yes, two years ago at the opening of the World Cup in Punta Ala. I fell and broke 3 ribs.

What happened next ?
I had a 3rd operation! The operation was not the most painful, it was a pleural talcage to repair the pneumothorax. After 3 operations, I had lost a lot of weight and I was down in the dumps. I had to go through a 6 chemo program, every 3 weeks. The last sessions were spaced out a little more because my red cells were not high enough. So, they lasted from early October to late January. They call this preventive chemo. Late January, my results were good. Everything that could have been affected by the bad cells was removed. Today, we can't say I'm healed, because cancer is complicated. But everything was done so that it goes well. Above all, it was treated in time and hit nothing else. The important thing they told me, is to listen to my body. If I'm tired, I rest. And if I'm OK, I do what I want to do.

Did you do some activities during your treatment?
When you are opened in two, it takes a few weeks to recover, walk or move normally. Treatment is heavy. This is not a small injury or a little weak moment. Chemo knocks you down. When you are tired, you don't need to add tiredness in your body. I tried cycling, not for training, but to clear my mind. I did a lot of skiing, a little motorcycle, and electric bike. For many people, what I did was a bit too much. For me, it was just a way to clear my mind and to think about something else.

With your competitive spirit, it should not be easy to go slow.
I had no choice, I had to rest! I want to do lots of things, but I have to live at the rhythm of my body. For once, I’m listening to my body! The goal is not to tire it more but restart it gently.

What’s the latest with your pneumothorax?
I still have pain in breathing. I do a lot of rehabilitation. I think my lung capacity decreased a little bit. So, it will take some time to re-educate all this.

How do you see the future?
I need a goal because I've always lived this way. Today, what will help me is telling myself that I will return to racing. Without cutting corners. It will allow me to re-mobilize and be back in shape faster. I'm sure about that. I hope to start doing smaller competitions in June, without specific performance goals.

And you told us about another goal.
My real goal is to be able to finish a big enduro race by August. I want to go to Whistler on August 13 and finish the race. If I would race downhill or cross country, I think it would be really easy to get to the finish. On the other hand, I'm not able to spend 6 hours on a bike for 3-4 days for now, honestly speaking. But this goal will allow me to motivate me, after seven months without making real sport.

See you in Whistler?
You can count on that! 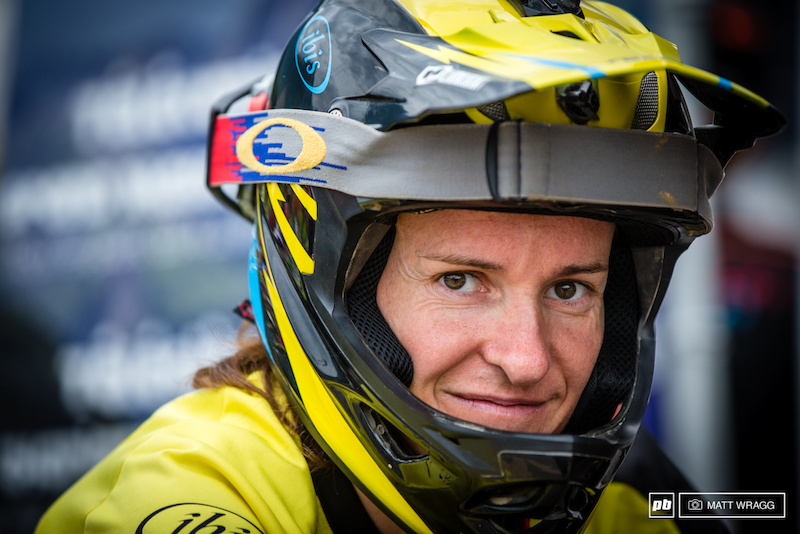 Many thanks to Arnaud Bachelard for the interview and translation.

ajayflex (Mar 24, 2016 at 14:55)
Has cancer, still wins an EWS race. Still is, and always will be an absolute champion of the sport. All the best for your recovery!

qbert2000 (Mar 26, 2016 at 7:47)
She is a legend. The most dominant MTB racer of all time man or woman. At her age, still kicking ass in the Enduro series. Like ajayflex said, winning a race with cancer, unbelievable the determination she has.

THomer (Mar 24, 2016 at 10:05)
all the best for a recovery to full strength!
you have always been an idol and you will always be!
rubber side down and brooooaapp!

klunkykona (Mar 24, 2016 at 15:19)
ACC is a machine. I suspect that she will destroy the cancer in record time and then win what ever race she chooses to enter. Fuck cancer

deanw (Mar 24, 2016 at 22:50)
I met her in person at Crankworx a few years ago. Absolute class athlete and fierce competitor. She stopped to take a photo with my daughters and blushed when I told my girls she was a Olympic gold medalist. I sincerely hope she makes a full recovery.

I have some simple skin cancer at the moment, not very serious but still I got a great deal of strength from this interview.
Go for Whistler!

oldmanDan (Mar 24, 2016 at 15:44)
Bless you Anne-Caroline! Such a winner in life, I'm sure you'll win this one too!! Truly THE most accomplished female rider of all time!

biffdog72 (Mar 25, 2016 at 3:42)
Hey ACC your a bloody legend in the sport and someone who has always put the wow factor in your focus. Your 2015 sounds
very similar to mine but a different cancer ( they all suck) it's been 6 months since the opp and riding is the only thing that clears
my mind DH mainly. Hope to spot you and some of the other legends from the 90s for a quick photo at crankworx. Chin up and
all the best with your recovery!!!

jakeguthrie (Mar 24, 2016 at 16:12)
Had no idea Anne-Caroline was battling cancer. Wishing for a speedy recovery, want to see our number 1 champ back on a bike soon!

ILikeBike24 (Mar 25, 2016 at 8:48)
I dont get how its possible for this to get a lot less attention and encouraging comments then some new shitty drivetrain product(600 and 50)... Hope you recover fast ACC!

suspended-flesh (Mar 25, 2016 at 14:53)
ACC, I met you at Squaw Valley, CA UCI WC DH in 1999 when you were on the Volvo-Cannondale team. I never ask for autographs, but you signed the course map for me You seemed perplexed that someone would want your autograph, but it's because even then it was obvious that you are a true inspiration and great champion. Best wishes for a speedy recovery!!!

nesbittnick (Mar 24, 2016 at 16:16)
Happy to hear that the worst is behind you! Can't wait to see you return to racing but more importantly full health!

coltoncantrell (Mar 25, 2016 at 10:44)
I remember when dissorder 2 came out and her and Cedric had such awesome and fast footage I've been stoked on her every since and now she's winning enduro races it's soo awesome get well soon and keep kickn ass

Hugocalcagno (Apr 2, 2016 at 17:26)
The way you are fighting against the cancer is admirable. I see lots of positivity and strength. Knowing how hard is the treatment and the recover you are doing great. Best of luck! You are a bike and life champ.

danielshiels (Mar 25, 2016 at 1:57)
Absolute legend, is there anything she can't beat? Best wishes for a speedy recovery, absolutely sure we'll see her back on the podium

garylucas (Mar 25, 2016 at 13:44)
More power to you for being a true champion on the mtb circuit, and now a cancer champion. Is their anything Anne CAN'T master.

this gave me some more motivation....