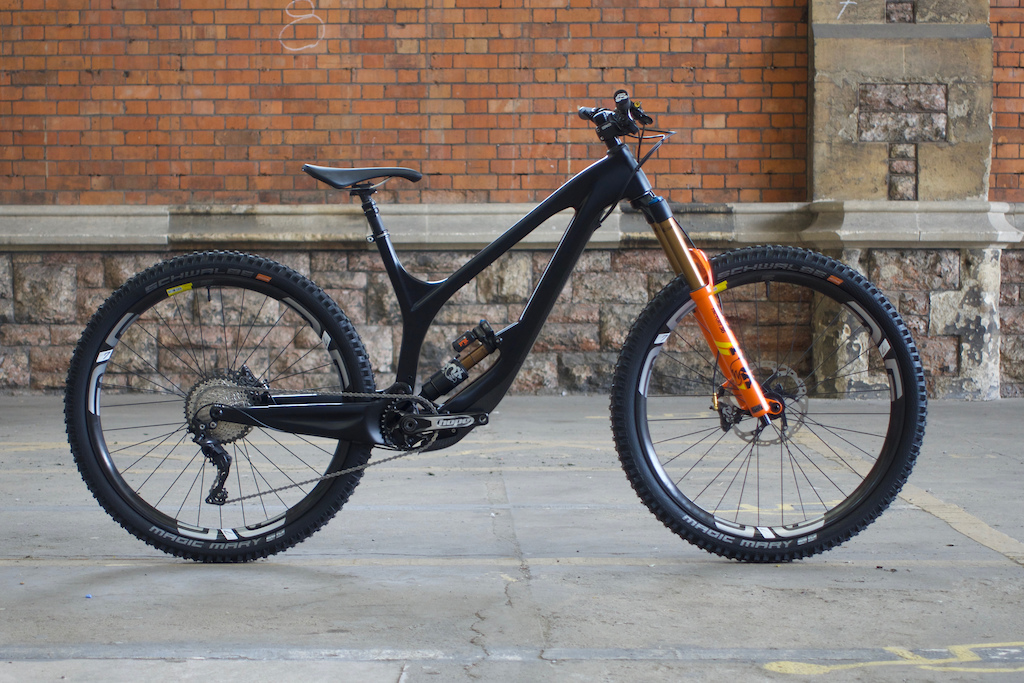 ARBR are no strangers to the pages of Pinkbike with their space-age looking Saker sparking one of the most heated comment sections the website has ever seen, and that's saying something.

Rob Barr has not let that deter him though and has returned with a new prototype 29er, the RB2. The RB2 is not an evolution of the Saker but a whole new model with a different purpose in mind. While the Saker focussed almost entirely on descending ability, the RB2 is aimed at an all-day ride - up hill and down dale. Don't be fooled into thinking his bike will feel out of its depth anywhere though, with 160mm of travel and 29inch wheels, it should be a trucker in its own right. 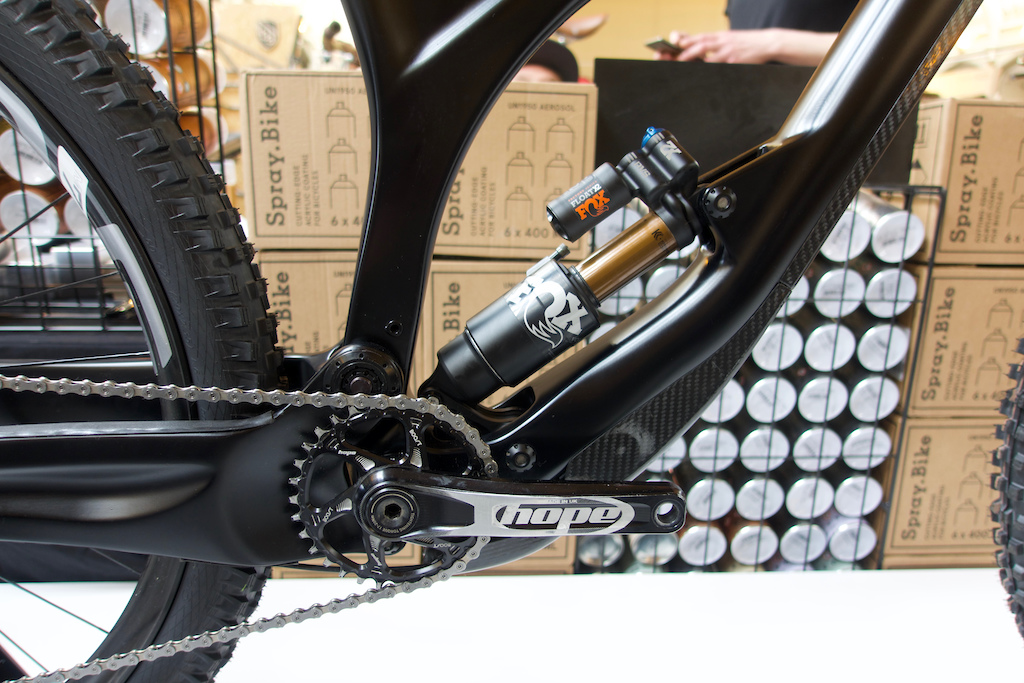 The linkage is similar to the Saker but lower down in the frame. 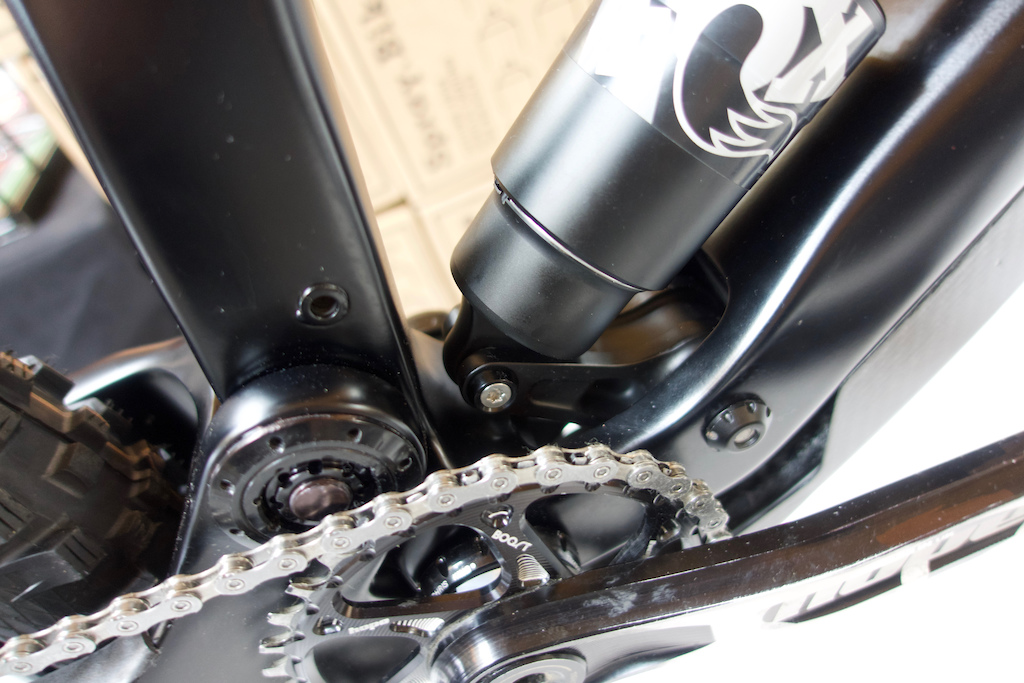 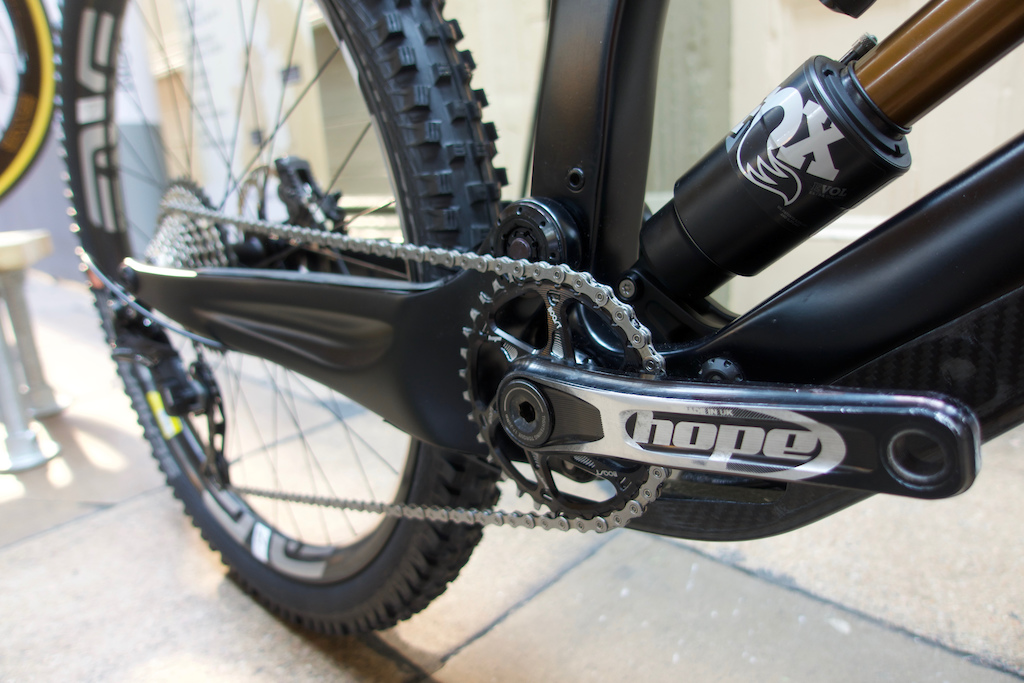 No idler this time, instead a conventional chain line that Rob is hoping will be easier to pedal on all-day rides.
The RB2 follows the same suspension ethos as the Saker with a drop link and a rocker, but it has been lowered on this bike. There's one big difference though and that comes from the fact there's no idler pulley. Despite certain parts of the industry moving back towards that design, Rob has a more conventional chain line on this bike. He believes that the extra weight, noise and drag would make all day rides a chore so has dropped it from this model. 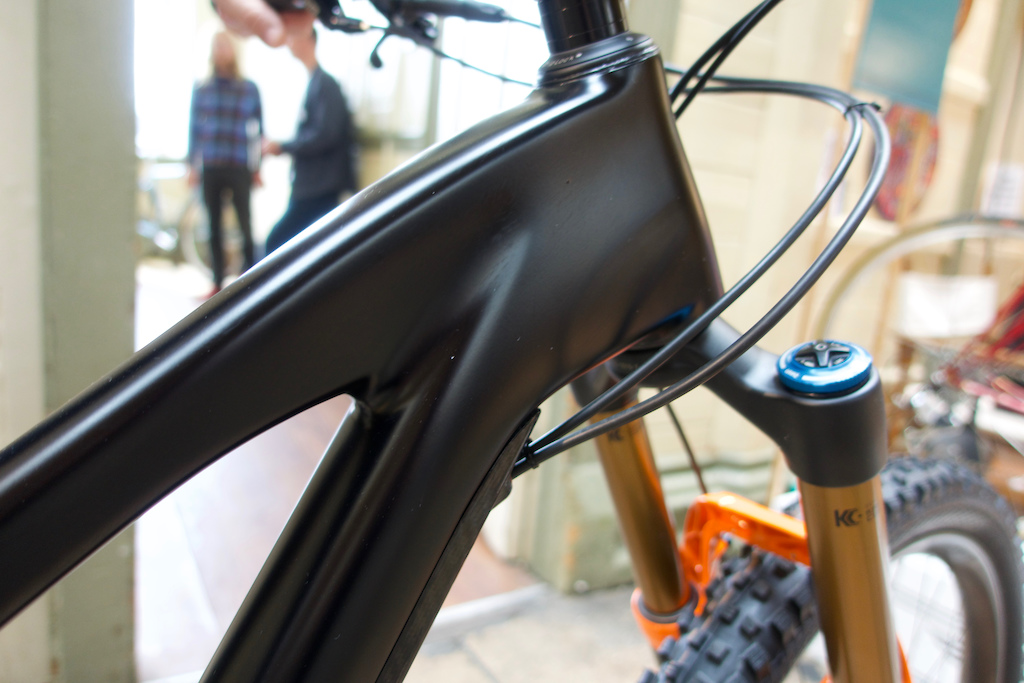 A matte black finish replaces the weave of the Saker.
This is a 160mm platform with a 64° head angle and 78° seat tube angle. This size large(ish) frame has a 1275mm wheelbase and 485mm reach. 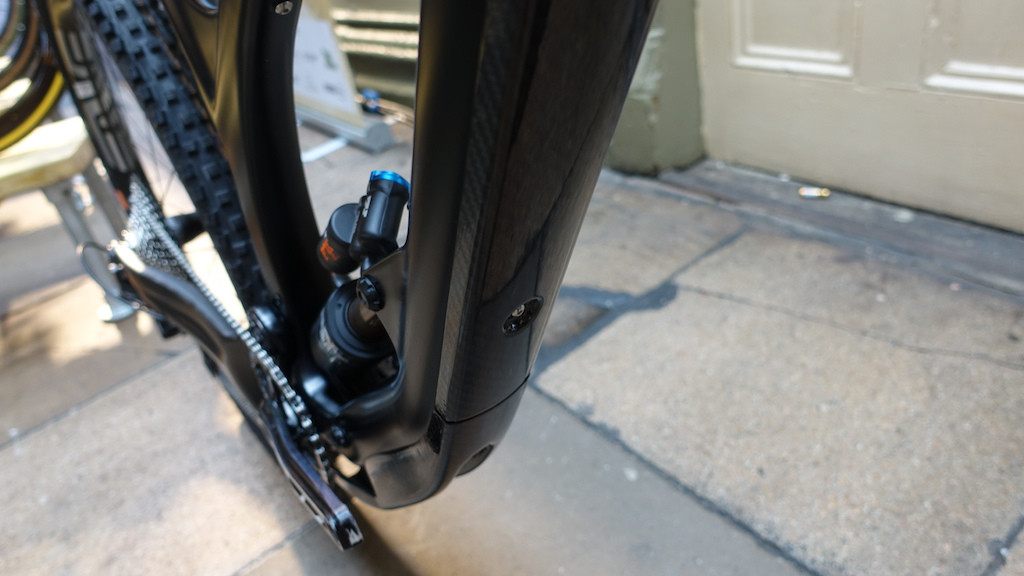 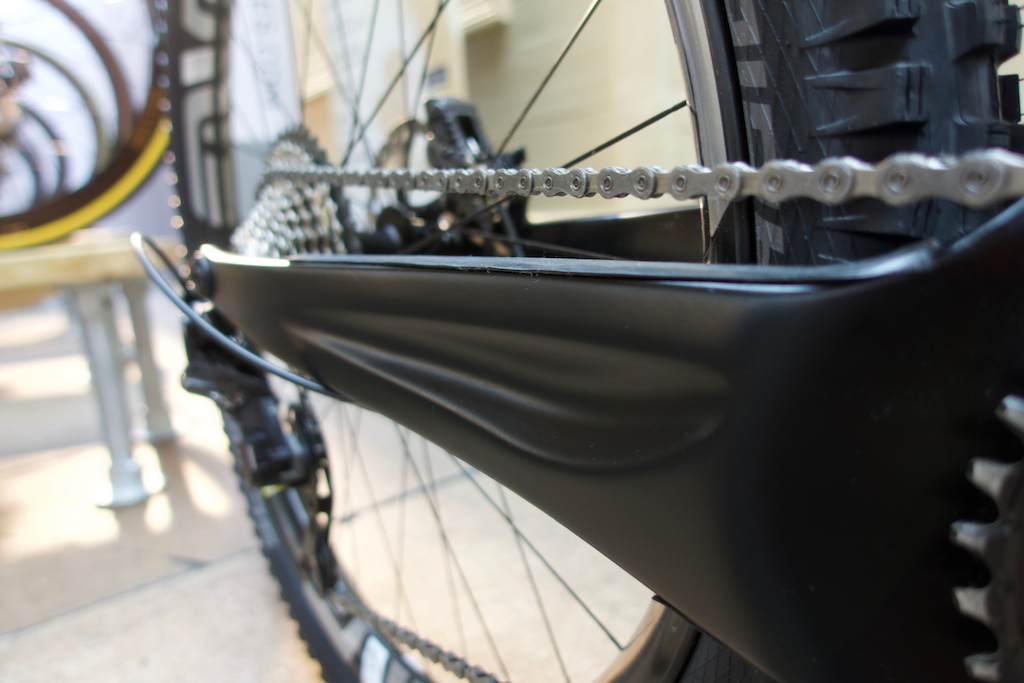 A low-slung swing arm is part of a unique looking bike.
Rob wants to do a bit more testing before the bike is production ready but expects to have a final version ready for the 'Ard Rock enduro race in August. The bike will be made in West Sussex so pricing is expected to be in line with the Saker (£4,390) but maybe slightly cheaper as there is no foam core in the frame and the design is a bit simpler.

Gavalar66 (May 3, 2019 at 9:02)
Give the man some credit, the first bike was way over engineered, far too expensive, whereas this has a lot of promise, interested to see the finished article but price is key.

WAKIdesigns (May 3, 2019 at 11:05)
as cruel and unfair it's been, the first article with ARBR was the funniest comment section on Pinkbike ever. I was having stomach cramps from laughing. My abs were sore the whole next day. I haven't laughed so hard since I discovered FB group "Toilets with threatening Auras"

freestyIAM (May 3, 2019 at 14:11)
But its not a high pivot with idler anymore. Its just another single pivot now which doesn't really tickle my pickle. Looks nice though.

WAKIdesigns (May 5, 2019 at 5:11)
@Boardlife69: I thought to myself. Oh I remember Chumba DH bike to bes sexiest thing ever. Googled it. And it was like browsing Facebook for my high school crush. After going through 25 different accounts with same name I find her! There she is... Ooooh Gooooooood! Noooooo!

DavidGuerra (May 3, 2019 at 9:20)
Bike looks bloody fine. Aesthetically it looks nice too. It will pedal great with that pivot location, and even with a larger chainring. The downtube protector seems to almost act as bashguard. Depending on its strenght, that can be a good or bad thing. If it's strong enough, maybe it could be a tad bigger to really take on that function. Also by the specs, this could be a descending beast, not just an all-mountain ride.

Flowcheckers (May 3, 2019 at 9:40)
It looks like an old Rotec had a baby with a new Demo, and the offspring hasn't grown it's double crown fork yet.

DavidGuerra (May 3, 2019 at 9:46)
@Flowcheckers: Whatever. Rotec was a BB pivot bike, so no connection there. But the swingarm does look like it's coming from the BB, which is cool.

Flowcheckers (May 3, 2019 at 9:51)
Sorry, I assumed it was a bb pivot. Thanks for correcting me and not entertaining my attempts at humor.

One of my favorite songs and I always wanted a Chumba. Looks great

getsomesy (May 3, 2019 at 9:36)
wtf is with the shit pictures, honestly who the bageebuz takes linkage photo's from the drive side.... shiiiit.

The ARBR is the same. I am about 75% done building a steel version of it. Bottom of the swingarm has a short link that pulls the rocker that actuates the shock.

chriskneeland (May 3, 2019 at 9:22)
Chainslap in the lower half of that cog will be unbearable. Ask Evil owners.

Chris Kovarik is making an specific version that accomidates the 50t atm.

VTTyeahyouknowme (May 3, 2019 at 9:51)
Looks killer- one issue: if you're in the lowest cog will the chain be literally riding on the chainstay? Like, in a CAD model with 100% tension on the chain it never touches, but in the real world it'll be riding on the chainstay almost all the time? Is that why it has a chainstay protector that looks to be about two layers of electrical tape thick, because anything more than that will DEFINITELY rub?

Other than that potential issue, I love it. Like a xenomorph that has a Fox 36 for a toothed tongue.

TheLittleBear (May 3, 2019 at 10:50)
Rocky Mountain bikes should probably go ahead and buy the rights to this frame design and begin the rebirth of the RM7. DO IT ROCKY!!! DOOOOO IIIIIT!!

downcountry (May 3, 2019 at 9:05)
Looks better than most big mfg frames. I wonder what the leverage ratio looks like?

willsoffe (May 8, 2019 at 7:14)
It's pretty progressive. Not quite as progressive as the Saker but certainly more progressive than most production 29ers!

beeboo (May 4, 2019 at 5:24)
Great looking bike!!! ARBR hit a home run with this design. The Saker was fugly but it had a purpose. Unfortunately fashion stood before function and that’s what killed it......plus the price

Hopefully the price on this is new model will be much lower! It’s a real head turner now

Primoz (May 3, 2019 at 9:15)
Saddened to not see an idler on the bike. I get the points made against it, but they are solvable in my opinion. Weight is the biggest issue, but cmon, this is a carbon everything bike, it must weigh what, 15 kilograms? You can put two drivetrains on it and still have a light bike!

Woody25 (May 3, 2019 at 10:29)
That slacked out front end and low top tube make it look slightly like a bike that's in the middle of a really hard landing! Gotta say I really like it.

tripleultrasuperboostplusplus (May 5, 2019 at 6:43)
bike looks pregnant

nouseforaname (May 3, 2019 at 12:49)
So you mean nice and stable geometry so when you're tried after riding for 4 hours with another 2 to go you won't be over correcting and twitching around every rock on the trail? Touring road bikes are longer and slacker than road racing bikes, why would an all day MTB be as short and steep as one you're going to ride for 2 hours and put away?

One of my favorite songs and I always wanted a Chumba. Looks great

viatch (May 3, 2019 at 8:54)
I could only imagine the amount of stress thos short tiny links put on the bearings and frame

pinkbike-engineer (May 3, 2019 at 9:22)
Forces in the bearings or the frame are not driven by how small/tiny a link is. The system is minimally constrained so link stiffness plays no role in load distribution assuming you don't have so much deflection that linear assumptions can not be made. Link length is also not a driver as the loads are really derived from the angles and the ratios they are to each other. If you took this exact system but scaled everything by x1000000000000000000000 and applied the same load at the wheel you would get the same out put load at the shock. Not saying the bearing or frame stresses are low in this configuration I have no idea what they are and is really hard to tell since you cant even really see where all the link pick up points are but its not driven by how small or short a link is.

radrider (May 3, 2019 at 10:42)
its a single pivot. the linkages look like they are only used to control the leverage ratio on the shock. You would be correct to assume there would be high stress if it had something like a mini horst link setup at the end of that long swing arm.

fluider (May 5, 2019 at 1:31)
I like the bike, even the previous version that heard so much negative crap-conmments, but, this one has some small mainpivot. What diameter pivot axle does it have?

kerosen1 (May 3, 2019 at 9:09)
Different for sure. Almost very beautiful but finally not really. Give him a good point for trying hard!

notthatfast (May 3, 2019 at 22:36)
I really like how the photos allow the drivetrain to completely obscure anything worth looking at. Try turning the bike around next time...

Compositepro (May 5, 2019 at 9:05)
dont apple sell a bazillion,more like santa cruz surely this is more beta max video

IllestT (May 3, 2019 at 10:36)
Looks like it ate too much barbecue and needs a lay down for a while until the meat sweats subside

Mac1987 (May 3, 2019 at 11:51)
If carbon needs protection against impacts, then why protect the carbon downtube with a piece of carbon?
It's not cheap to replace either.

Mac1987 (May 3, 2019 at 13:57)
@alexsin: ok, then they should change the caption. But the question remains: why use carbon, a material not known for its impact resistance, to protect against impacts?