Stiga Madness
Stiga Madness. The idea came from Visa Malinen, the current Finnish #1 downhill biker, and some friends a few years ago. These guys modified a standard Stiga sled (which is meant for children "7 and up") and started jumping it at local hills. They knew they had something special when, according to legend, Visa landed a 360 with an early version of one of these consisting of only the stock sled with a motocross handlebar taped onto the steering wheel! The poor sled apparently didn't fare too well, but that didn't slow them down.

More action from MPFilms
Mike Kinrade has put up some more clips from Hidden Pleasures. Check out the Cemetary Gap, and a few others. If you havn't seen the film yet, http://www.pinkbike.com/shop/ order your copy here. Video Clips
Cemetary Gap clip

If you ride it, they will come!
The number of mountain bikers around Calgary who believe that the winter of 2000/2001 will never come is ever increasing. Maybe it is to compensate for the lousy Summer of 1999, where weather was such that it snowed during the Canmore World Cup held in July, but the summer of 2000 just won't quit. Sure those of you reading in the deep US South may think we never leave our igloos, but anyone up here knows how dry it's been all summer and fall, and while the temperature drops to below freezing, the mountains are still in prime biking conditions. So much so, that many two-plankers and knuckle draggers are getting desperate to see more of the white stuff. 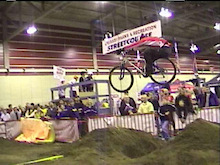 Looking for a great way to kick off the season? Look no further! Western Canada's ultimate cycling event is coming to Vancouver and Calgary. In response to the consumer demand and the phenomenal growth of the biking industry, national event management is launching the bike expo. For all of you biking enthusiasts, this event will feature the industry's leading manufacturers, retailers, clubs, and bike competitions. 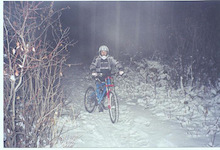 Calling on all night riders.
In light of the ongoing amazing conditions in K-Country and the fact that Thursday weather calls for sunny and a high of 13, we are planning a night ride on the Chief Hector Trail this Thursday (the 23rd). The Chief shares most of the same climb as PrairieView but is a bit shorter. The downhill is steep and technical (trees, roots and rocks) and is suitable for intermediate and advanced riders.

Winter Rides
After countless phone calls on Saturday night, it didn't look good. Steve and I were the only ones committed to riding. I managed to get a couple maybes, some weren't home, and some said outright no! I heard all the excuses, "too much snow", "too cold", "my bike needs work"
Sunday morning started out......... 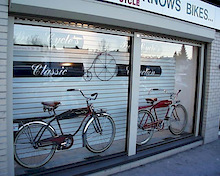 A journey back in time

In it's 5th year of existence, this awesome show conveys Brian Sibthorpe's love and passion for bicycling. Brian, the owner and operator of Bow Cycle and Sports in Calgary has been collecting antique bicycles for well over 15 years.

What to do when it's snowing

I know this is a biking website. But just like me, many of you are ski and/or snowboard bums. For those of you living in Alberta/BC area here is what's happening at the mountain resorts.

Lake Louise is officially open with 3 out of 11 lifts running.
Sunshine Village and Fortress mountain will open on November 17th with Banff Mt Norquay and Fernie following on December 1.
Expected opening date for both Nakiska and Kimberley is December 8.

You have to see this film!

Here is a clip from the boys that starred, filmed and produced, Hidden Pleasure. This is one of the better films of the year. Shot on location in the Kootneays. Mostly the Nelson area, this film embodies the love to ride. Unlike the "plastic" feel of some of the Kranked and NWD films, Hidden Pleasures really brings it home. Every time I watch this tape I get the feeling of what it is like to rip it up with my buds and instantly I crave the feel of my grips and the wind in my face. I can only attribute the difference of this film to the fact that it is filmed and produced by the riders.
If I ever make a film I would want it to convey the same essence and atmosphere that I see in Hidden Pleasures.

Not shown in this clip, Hidden Pleasures has THE BADEST huck I have ever seen on film. Yes, that's taking into account Benders 60 footer in NWD. "Mike Kinrade, you're f*ckin' CRAZY!" On my copy of the tape the cemetery gap is completely worn out from watching it over and over again.

Looking for that dream job?

Come to the Dark Side - An invitation to Work for Gravity Assisted Mountain Biking in Bolivia, South America.

The bulk of our work is guiding one day downhill mountain bike tours and unfortunately this means that we have to head out into the hills for.

The season's never over...
The end of daylight saving time and the arrival of November has sure put a damper on most people's riding, especially up here in Calgary. With the sun setting before supper time, most mountain bikers are now limiting themselves to weekend rides or to urban outings. However, thanks to an abnormally dry October, most of the trails in Kananaskis Country are still in amazing condition, so on this November Thursday, Blarowski and I decided to head to the hills for an evening ride - those Vista lights ought to be used more than once a year!
Read More
Reviews and Tech Reviews
:: from RadekNov 6, 2000

-10degC, ice, snow...no problem!
Saturday the weather finally turned for the worse. A bunch of snow, ice and a big drop in temperature. No worries though. Dave F, Derek, and I decided to crack open the winter chest, and set out into the cold Sunday morning. It looked pretty crazy at first. I had one of the biggest wipe outs of the season just trying to load my bike on the car. Silly ice.
We rode anyway, and as it turns out, the sun came out and we had a great day. We freaked out a bunch of on lookers when we rode the skinny (2-3inch) rail on the bridge in Eau Claire. Just don't fall of this one in the winter. Just icy rocks and not very much water to break the fall.

The "Radical Reels" show will take palace Saturday November 4th at the Banff Springs Hotel in the Van Horne Ballroom. This presentation will feature a collection of epic adventures from around the globe. The following movies will be shown:

You can view the detailed program at http://www.banffcentre.com

We just bought our tickets and hope to see you all there. (Just look for the guys and girls in PinkBike t-shirts). This is a perfect opportunity to see that New World disorder MTB movie everyone is raving about.

This is as sick as it gets.
So I watched "New World Disorder" last night. Wow! This film really takes the industry to new heights. Literally! Bender and a cast of others turn it up as they launch of 60 foot drops. This is a must for your collection.
Head on over and check out the insanity.
Read More
Press Releases
:: from Fern JordanNov 3, 2000

"Stony Scrambler" cyclocross race
Twenty-five tough and talented cyclocross racers refused to be frightened by the advance (and inaccurate!) notices about the unfriendly nature of our course. Their reward - a fast, fun, challenging race on hard-packed rolling terrain (familiar to Accept the Challenge mountain bike competitors).
Read More
Reviews and Tech Reviews