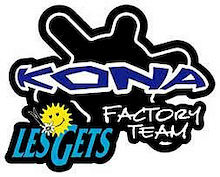 The Gathering a Huge Success
The Gathering went off with a bang! I will spare you the details and let you read the many event reports that have been posted on various sites: 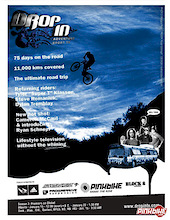 Challenge - The Last Weekend
This is your last weekend to submit your pictures and be eligible to win a new pair of badass
Adidas Evil Eye shades!

Post the Drop In poster somewhere unique with good exposure to a lot of people, get someone to take a picture of you standing beside your proud achievement, then post it on the forum.
On February 1st I will crown the winner and award the prize. One weekend to go! 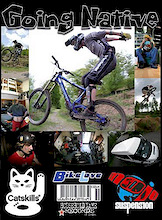 Descent-World's Going Native Now Available for Purchase
Final edits are done - Jon Beckett's new movie Going Native is finished and ready to order. Let me tell ya, if it's anything like his first movie, True North - it will be awesome.

For those of you who haven't had the chance to see True North, you'll be happy to hear that the full version of True North 1.5 is included on the Going Native DVD.
Read More
Stories Reader Stories
Drop In!    :: from Mike JohansenJan 24, 2005 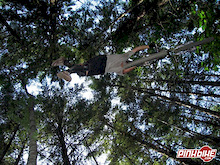 Sorry about the mix up for all of you B.C. buds... We were under the impression, and the deal was, that you would get to see the first episode last weekend. Alas something was screwed up and as you know the season began with episode 2. We are in the process of kicking some butt and getting some answers. For now check out the 3rd episode story and get ready for Vancouver Island.
Read More
Stories Reader Stories
Luc 'Acadian' Albert    :: from Luc 'Acadian' AlbertJan 21, 2005

Suspension news from Push Industries
Darren and Jimmy of Push Industries have been busy bees since last summer. For some, winter means downtime - you know, your favorite pair of slippers on, vegging on the sofa, sipping on your favorite cocktail, trying to recharge the batteries. Well, for these guys it’s been quite the opposite.
Read More
Press Releases
Drop In!    :: from Mike JohansenJan 18, 2005 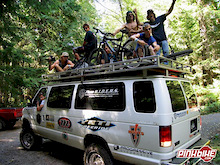 Drop In Episode 2 - Bowen Island
Here is a little taste of episode 2 to wet your whistle.

For all of you B.C. folks Episode 1 starts this Saturday!

Reminder: 'The Gathering' is Going Down this Weekend!
Go Huck Yourself is hosting a big two-day mountain bike competition at the Renton Motorcycle Center (dirt jump comp - Jan 21) and Renton Skate Barn (street comp - Jan 22). "We've lined up over 40 riders including all of the top pro's from across the U.S.& Canada" said A.J. Johnson of GHY. This should be a great spectator event - X-Games style competition, live band, DJ, and more than $3,000 in raffle prizes (bikes, frames, forks, parts, and apparel).
Read More
Stories Reader Stories
Radek Burkat    :: from Adrian BerglesJan 14, 2005

Dropin Interviewed - Season 4 Riders Announced
Recently I had the chance to get Drop In Producer Mike Johansen on the phone. Mike is one half of the production team behind the only freeride show on t.v. He was good enough to let me pick his brain for over an hour on everything from season one to the soon to be released season 3 and everything in betwen. I’ve been a fan of the series since its debut over two years ago. The following are some random questions from a mountain bike lover and a Drop In viewer. I present them to you Mountain Bike Nation.
Read More | 1 Comments
Interviews
Luc 'Acadian' Albert    :: from Eric DaviesJan 13, 2005

King of Rhythm Competition - Feb. 5th
[L=http://www.raysmtb.com]Ray’s MTB[/L] Indoor Park in association with pro street rider Joe Prisel are proud to announce the revolutionary King Of Rhythm! Held on February 5th at Ray’s indoor park facility in Cleveland, Ohio…participate or be witness to a day of style, technique, and rhythm as three classes will battle it out to become the King of Rhythm!
Read More
Press Releases
Luc 'Acadian' Albert    :: from Marshall RutmanJan 13, 2005 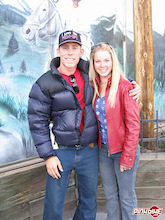 Chris Duncan and Hannah Steffens ‘Ride Bikes’
‘Ride Bikes’ has been Gary Fisher’s motto for a long time. With the help of Chris Duncan and Hannah Steffens, Fisher wants to remind the world how much fun it can be to Ride Bikes. Chris and Hannah are two of the most dynamic and talented freeride athletes in the industry and Fisher is excited to have them riding our bikes.
Read More
Press Releases
Russ Day    :: from 2006 UCI World MTB CommitteeJan 13, 2005

2006 UCI MTB and Trials World Champs, Rotorua, New Zealand
Rotorua is the hometown of mountain biking in New Zealand. In just under two years, August 22-27 of 2006, this small city, in the heart of New Zealand’s North Island, will also be the centre of the mountain biking world, when the World Championships return to the southern hemisphere for the first time in ten years.
Read More
Stories Reader Stories
Drop In!    :: from Mike JohansenJan 13, 2005 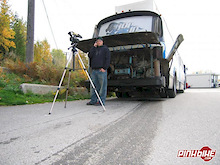 Drop In Episode 1- Background
The First of the new episodes will air in Canada this weekend. This season I will write a little story that will give you an idea of what to expect in the upcoming episode. Just to wet your whistle. I might tell you about what you will see or something that no one will ever see because it didn't make the cut because of timing.
We leave a lot of pieces of each episode on the cutting room floor, these are the times I wish we had an hour timeslot to fill.
Read More
Stories Reader Stories
Radek Burkat    :: from Cameron McCaulJan 12, 2005

Top Soil online - part 2
This is the whole section from the Adidas Slopestyle.

SRAM X-Generation drivetrain review.
For the longest time, SRAM was primarily known for their Grip Shift technology. Finally, after years of testing and refinements, SRAM Impulse Technology Triggers were launched at the 2003 Sea Otter Classic. After seeing Shimano going the way of Rapid-Rise and Dual Control, I was excited to see what SRAM’s X-Generation line had to offer.
Read More | 1 Comments
Reviews and Tech Reviews
Luc 'Acadian' Albert    :: from Nick SunseriJan 11, 2005

The Return Of Kovarik
Intense Cycles announces the return of Downhill And Mountaincross Sensation Chris Kovarik to the Factory Racing Team for the 2005 season. Chris returns to Intense after a devastating MX accident that left Chris’s leg in traction for several months, and kept him off the pro circuit for the entire 2004 season. Kovarik has been training hard and is currently competing in the Australian National Championship Series in anticipation of the upcoming DH/4X season.
Read More
Press Releases
Drop In!    :: from Mike JohansenJan 9, 2005

Challenge
To the right is a poster of the announcement for the premier of season 3 - Drop In. Go ahead and print this off and put up where you like, the more visable the better.
The challenge... Send in a photo of yourself and where you've put up the poster. A winner will be announced after the B.C. airing of episode 1 Saturday, Jan. 22.
The Prize... A Brand New pair of
Adidas Evil Eye shades
The winner will be chosen depending on 3 criteria.
1) How many posters are posted
2) The exposure the poster has to the public
3) Originality / Character


Have fun with it.
Post your pic in the forum Here
Read More
Stories Reader Stories
Radek Burkat    :: from Radek BurkatJan 7, 2005 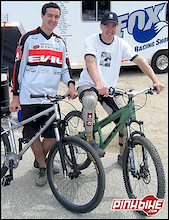 Kyle bielenberg Memorial Raffle
On November 7, 2004, we lost a huge part of our community when a respected member of MTBR/Ridemonkey, loved friend, incredible rider, and all around great guy, Kyle Belenberg, passed in his sleep.

Winter Tire Test
So it’s a week into January and there’s a layer of snow and ice covering your favorite singletrack. What’s a rider to do?
If you’re unadventurous and aren’t looking for a new thrill, chances are your two-wheeled friend becomes a ceiling ornament in your garage. Your wedge-shaped seat is replaced by a big comfy couch and your handlebars make way for the vibrating plastic Xbox controller. But if you can handle sub-zero temperatures and want to keep riding your bike while others are riding the sofa, the good news is there are some great options for studded winter mountain bike tires that will make riding on snow and ice like a day in the park.
The only problem is which tires to go with.
Read More | 1 Comments
Reviews and Tech Reviews
Luc 'Acadian' Albert    :: from Sean HeimdalJan 6, 2005

Riffle, who recently turned 18 and is the current USA National Champion in downhill, will be surrounded by some of the best professional racers on the circuit. Rich Houseman, who excels in mountain-cross and downhill, is coming off one of his best seasons ever and will add depth to the stacked Yeti roster.

Top Soil film online
TOP SOIL is a fast paced action packed mountain bike movie filmed and edited by AptosProductions.com's Jeremy Teman and Cameron McCaul. It's a full length film shot all throughout the year 2004. Viewers will be able to enjoy this film by logging on to Aptosproductions.com each week to download a new section. The action starts on Jan. 5th and a new segment is added every week until the whole movie is at your fingertips... Log on to www.Aptosproductions.com and click on "Video" to start the journey.
Read More
Drop In!    :: from Mike JohansenJan 4, 2005

Drop In season 2 DVD reviewed
If you're like me you missed what Decline had to say about the second season of the TV series Drop In on DVD.
Luckily I have a buddy that happened to pick up the December issue of Decline magazine and flip through to see something very unexpected... 9 out of 10!!!
Click the image of the actual review to see what we missed in December, from one buddy to another.
BUY IT HERE
Read More
Luc 'Acadian' Albert    :: from Luc 'Acadian' AlbertJan 3, 2005 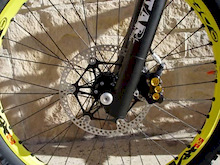 You can read up on it by visiting MSC's Press Office section of their web site.

Gamut USA
Gamut USA is new to the mountain biking scene. Born this year, the company’s founder is Silicon Valley engineer, Eduardo Graziosi. Ed has over 25 years of experience designing and manufacturing precision components for everything ranging from medical devices to racecars. Joining Ed in Gamut’s endeavors are his two sons and a friend.
Read More
Press Releases