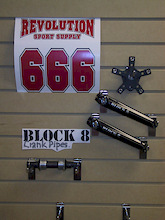 Product Test: Block 8 Crank Pipes
Calgary's own Revolution Sport Supply has won the right to distribute Canada's newest brand of industrial bike parts, "Block 8". Although details are scarce, the founders of Block 8 were repeatedly thrown in a freerider's equivalent of a drunk tank, the "bike tank" in an unnamed Western Canadian City by the police for violating urban laws; scaring grannies and hookers alike with their stair gapping, mad drops and other outlaw riding. Finally the group was charged with "Reckless Endangernment of Society" under the criminal code CC25625-8. When their case came to court, all defense had to say was "the end of weak bike parts is nigh". They were apparently declared insane, and the sympathetic judge granted the group the right to repay society by giving them a life sentence in the Block 8 Internment camp deep in the bowels of the Canadian Rockies.
This Camp, with it's 100,000 hectare compound, and mammoth machine shop is where the Block 8 crew will serve their life sentence, designing and testing tough bike parts on homemade bikes in an effort to spare Canadian freeriders the agony and expense of mangled and broken bike parts.

Initial impressions and set up