Join Pinkbike  Login
The first World Cup downhill and 4X race of the season has wrapped up and Syndicate racer, Nathan Rennie, enjoys his first visit to the world cup podium for the season, finishing 5th in the downhill.Vigo, Spain was the site for this first World Cup stop. This beautiful city sits next to the sea, and from the race site you could see both as a backdrop. The race site was nestled into the nearby neighborhood
in the hills. The narrow, winding road to the site was barely big enough for two cars to pass each other, but thousands of fans found the race. 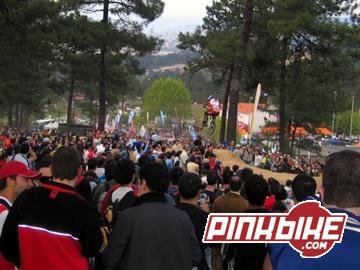 4X action was mad as nearly 8,000 enthusiastic fans lined the track. They went mental when the riders hit the huge jumps. The racers loved the track and Rennie was excited to race as the 7th place qualifier.
In the first round Rennie is cruising in toward the bottom in 2nd place prepared to advance. The leader surprisingly doesn’t jump the quad jump. Rennie jumps and nearly lands on him. As they tangle, they manage to stay up, but Sam Hill sneaks by them and gets to the finish line before Rennie. Rennie’s out. Prokop wins, Peat 2nd, De Bever 3rd and Lopes (first place qualifier), finishes 4th. 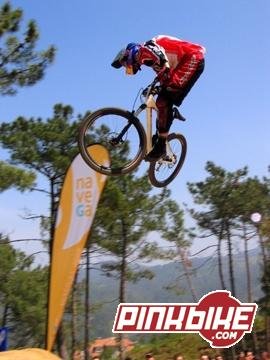 Truly world cup worthy, the downhill track tumbled down the hillside through the fern filled forest. Rennie felt at home as a major section went through a gum tree forest. The track and ground conditions felt like the last race he had done in Australia. Rennie described the course as, “Short but sweet with technical, challenging lines, with very physical pedaling at the bottom.” Rennie had the sweet set-up on his V-10: his Black Box Boxxer fork was fine tuned by Jeremiah Bubar, and he had the new Avid Juicy brakes with carbon levers and ti hardware. Everything was working perfectly.

Everyone practiced on a dry course all week with the promise of rain on Sunday, race day. Rain was delivered, but fell mildly in the morning, enough for organizers to take out the steep, rock slide section. The rain stopped, the track held up and the racing was on. 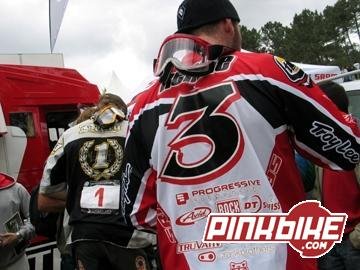 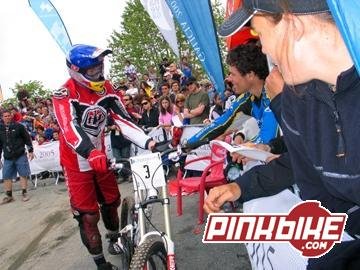 Vigo, this first time World Cup site proved to be a hit. Great tracks, easy proximity to hotels and friendly people made it a very successful weekend. The Syndicate is stoked to have Rennie on the podium.


THANKS TO THE SYNDICATE SPONSORS: