Join Pinkbike  Login
With most of Australia's factory riders sitting out this race for various reasons, it is interesting to note that the majority of bikes are standard sales' room models. It reinforces that it is the rider, not the bike, that produces the fast times. Most have adapted their particular bike to suit themselves in the form of tyres, handlebars and grips. As well as setting the suspension to their preference and the shifters/brakes to suit their ideal position. At this round some riders chose to lift their levers a little higher (or roll their handlebars back) to combat arm pump from the braking ruts that had formed on the track.

Let's take a closer look at the bikes underneath the fastest riders at the second Australian National Round.Of the 10 bikes, 7 riders chose flat pedals with only 3 choosing clips. Rock Shox accounted for half (5) of the forks on riders' bikes, with Fox having 3 pairs of forks, this left Marzocchi and Manitou with 1 a piece. Tyres are a particular choice and riders would use different models from the same brand depending on conditions, but the main manufactures were; Maxxis 5, Specialized 3 and Schwalbe 2. The break down of shifting systems was very evenly matched with 5 riders using SRAM and 4 using Shimano (the Jezken with its gearbox was left out of this count!). 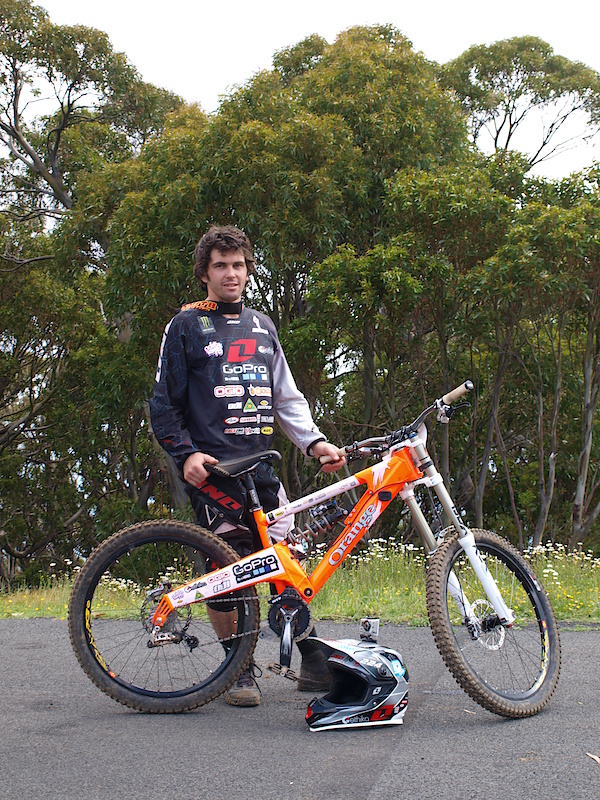 Ricky has been riding Oranges for many years now and knows how to get every inch from his settings. A titanium spring combined with a sensible build up makes the Orange one of the lightest bikes doing the rounds 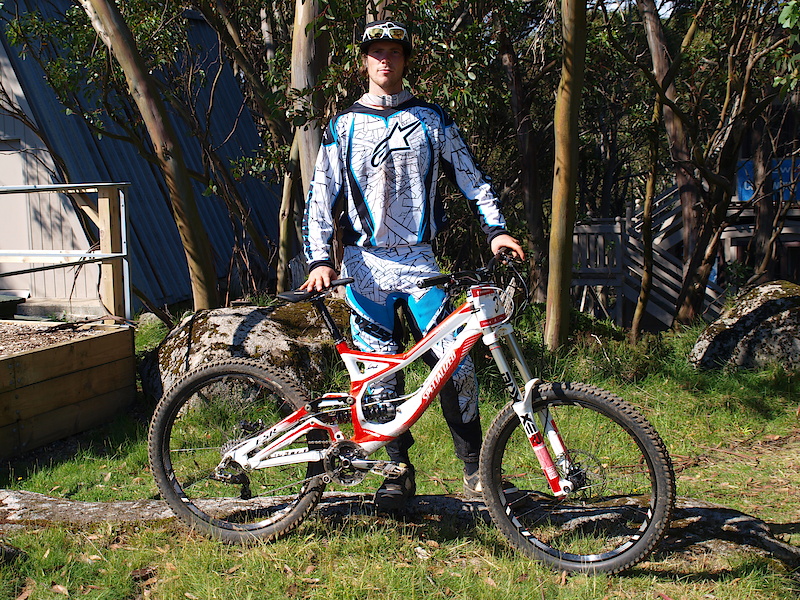 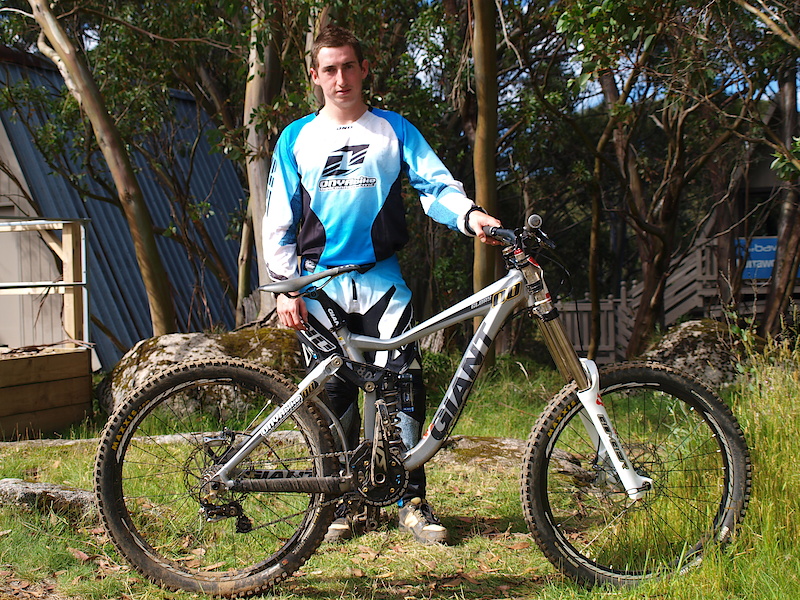 Giant Glorys are one of the most popular privateer bikes on the Australian circuit, not so common is the use of Marzocchi forks 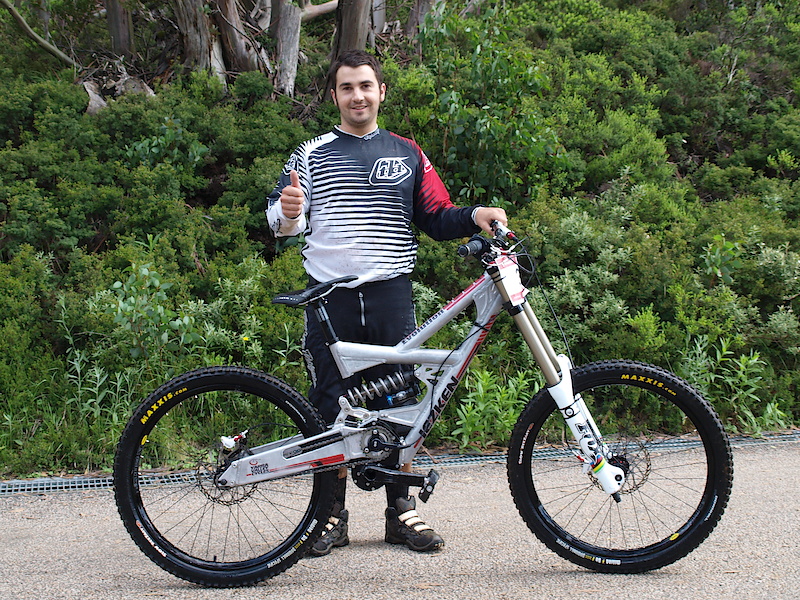 The most unique bikes at the events were the Jezken bikes that the Panozzo brothers were riding. These are still at the prototype stage, but the feedback from the riders has been good. An internal gearbox reignites the old debate about the future of bikes. For now enjoy the photo as much as Liam is enjoying posing for it! 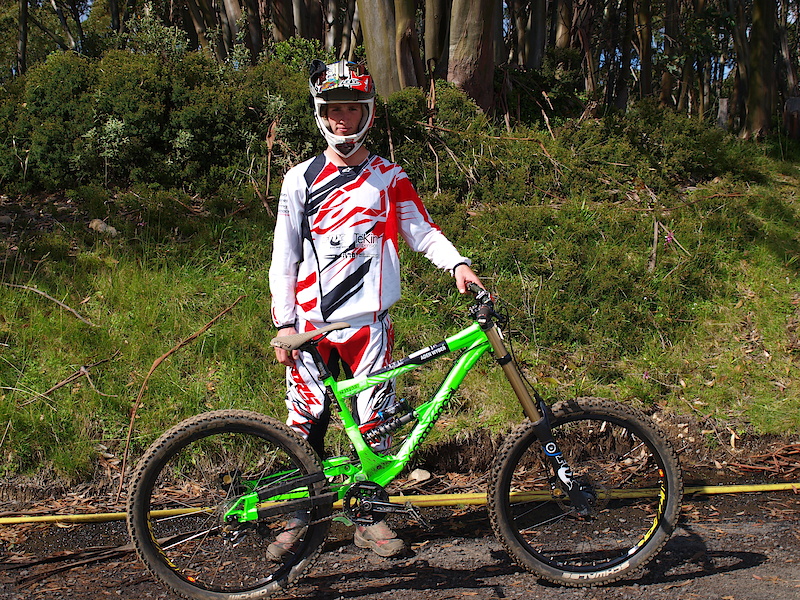 Aden has been onboard a Commencal for a while now, these bikes certainly do stand out 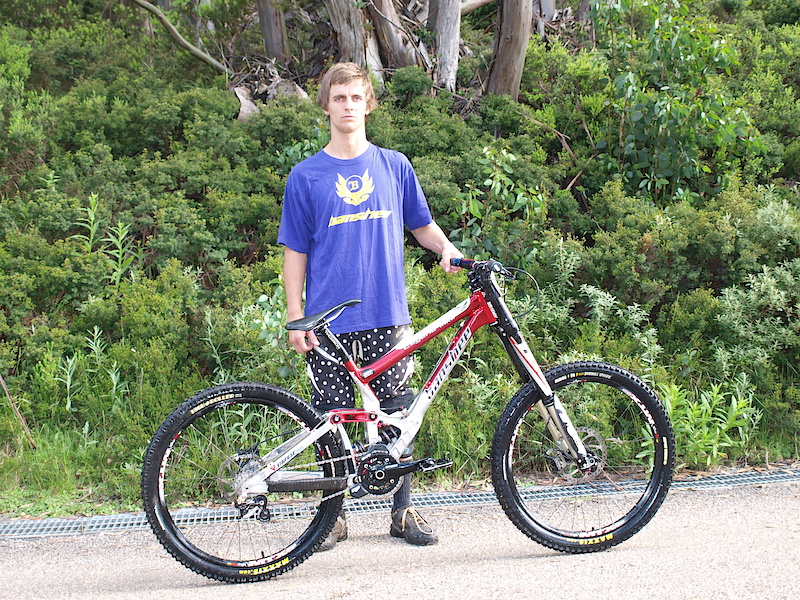 Cody rides a lot of Motorcross, this translates over to his bike set up and riding style 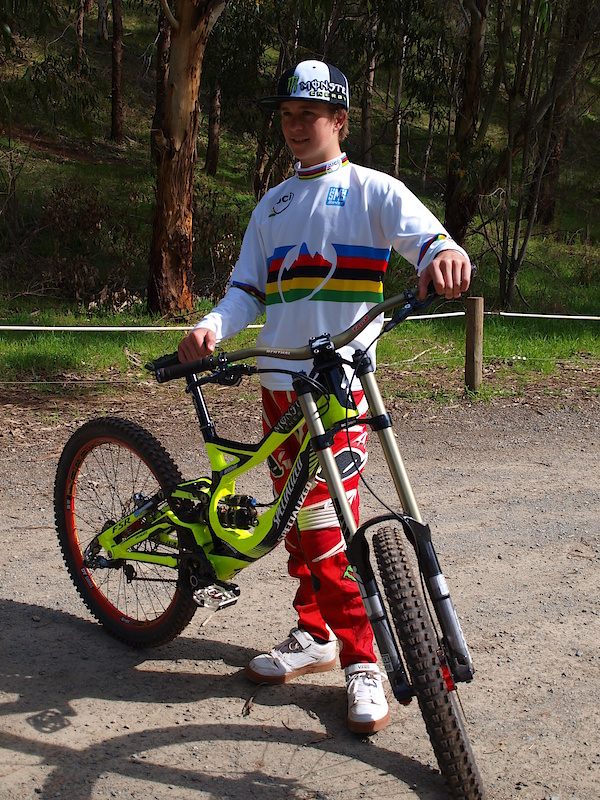 This photo of Troy and his Specialized was taken before this round, you will notice that there have been a few changes such as the forks on the bike. 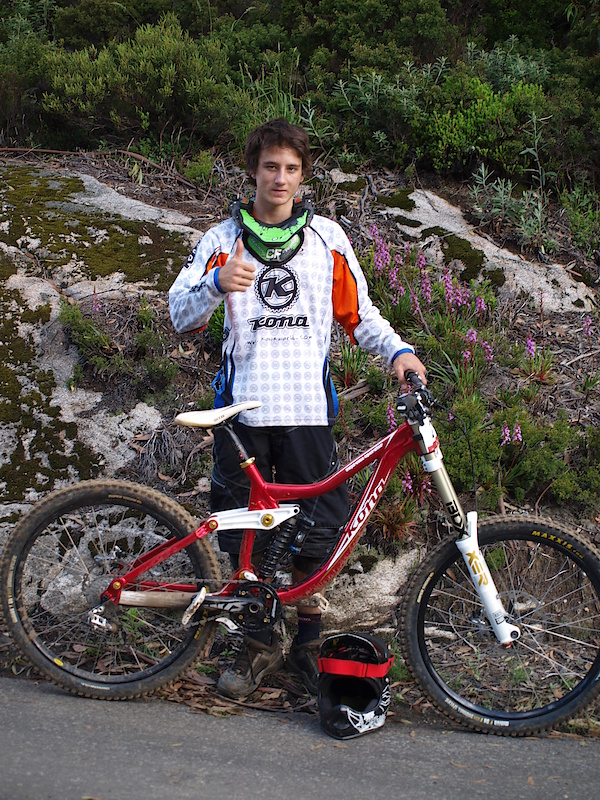 This is Connor's first year aboard Kona, but he looks comfortable already 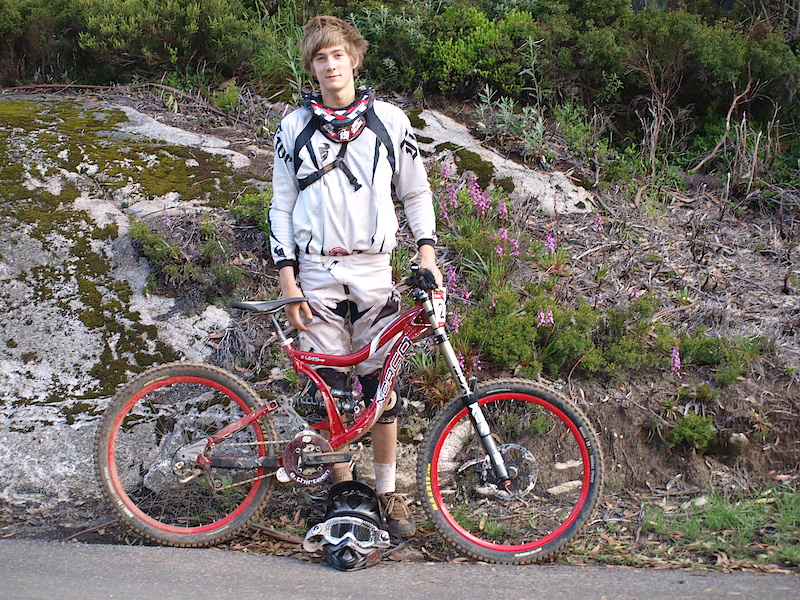 Henry is waiting for his new Team DH bike, but for now he is making do with the A-line 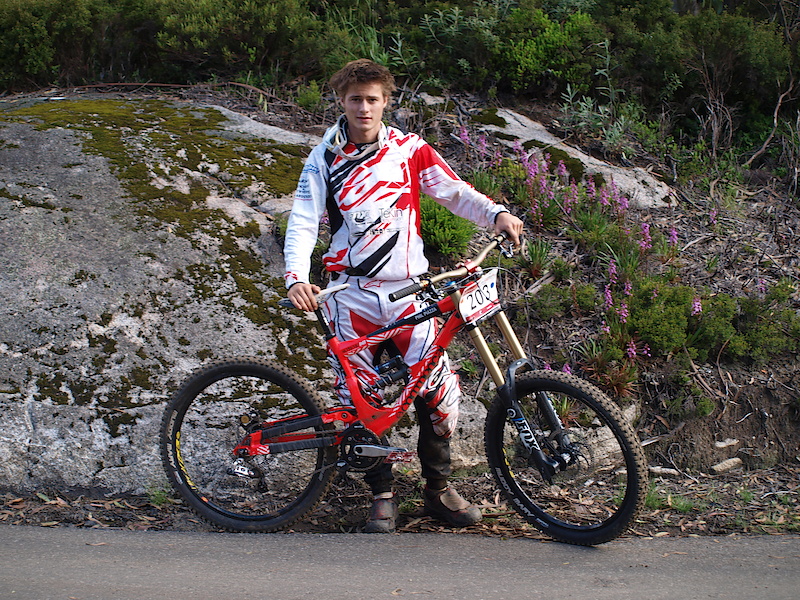 Another Commencal, this time Phil on his sponsored Commencal, you just can't miss these bikes when they ride past

mikelevy Mod Plus (Jan 19, 2011 at 9:50)
Beauty is in the eye of the beholder. I think the Jezken looks rad! Here's a piece we did with Jeremy Sherwill, the bike's proud papa: www.pinkbike.com/news/jezken-gearbox-prototype-interview-2010.html

DownHillCooper (Jan 20, 2011 at 16:55) (Below Threshold)
no u dont need to have driven one to understand how it performs. and anyway for all of those people who made my coment go below the thresh hold- understand that dirt mag i think it was named the demo8 2 the fastest bike in the world... so shouldnt that tell you something?

topgear had it on there.

and a demo is FAR FAR FAR from the fastest dh bike ever.

taletotell (Jan 19, 2011 at 4:54)
Saw the article on the jezken. They've taken a podium before and riders seem to like them. Ugly is in the eye of the beholder. If all bikes were born that way I'm sure we'd think the glory was ugly . . .

mikelevy Mod Plus (Jan 19, 2011 at 9:50)
More info on the Jezken can be found here: www.pinkbike.com/news/jezken-gearbox-prototype-interview-2010.html

I kind of like that Jezken though, just because it's such a monstrosity that you can tell nobody riding it really cares about how it looks. I'd actually really like to try one, it looks like it could take some serious sh*t.

webbrider12 (Jan 22, 2011 at 20:03)
the 2011 demo has the shortest chain stay and lowest center of gravity of any DH bike ever built. Both of these will definitely help the shittiest of racers in any race. So all of you need to stop judging the bikes by their appearances, and actually know what makes a bike easier to go faster on....plus it is all in the rider tho.

sloperider (Jan 19, 2011 at 10:51)
that jezken bike looks sick as hell. super burley gravity sled made for those kamikaze types. and if you think that bike is ugly you have a bad taste in bike

The-Dan-Jones (Jan 19, 2011 at 11:28)
Troy looks like he's grown a bit since last season. Which could mean some more improvement on top of an already killer rider.

BinChaser (Jan 19, 2011 at 13:26)
That Jezken reminds me of the Honda DH bike of the past. Honda also tried the internal gear box set up too, didn't they? Whatever happened to that deal?

Waldon83 (Jan 19, 2011 at 22:56)
Their reason for their DH bike was to provide better information about suspension for the Honda dirt bikes. And they had proved well, so they just didn't need to do it any more.

zasho (Jan 19, 2011 at 22:55)
www.renthalcycling.com/File/contact.aspx
they have a US Office for Bicycle products

jamesevison (Jan 20, 2011 at 13:42)
best out of all of them by far is definitely the commencal sipreme's they look sick with the fox 40's
Below threshold threads are hidden