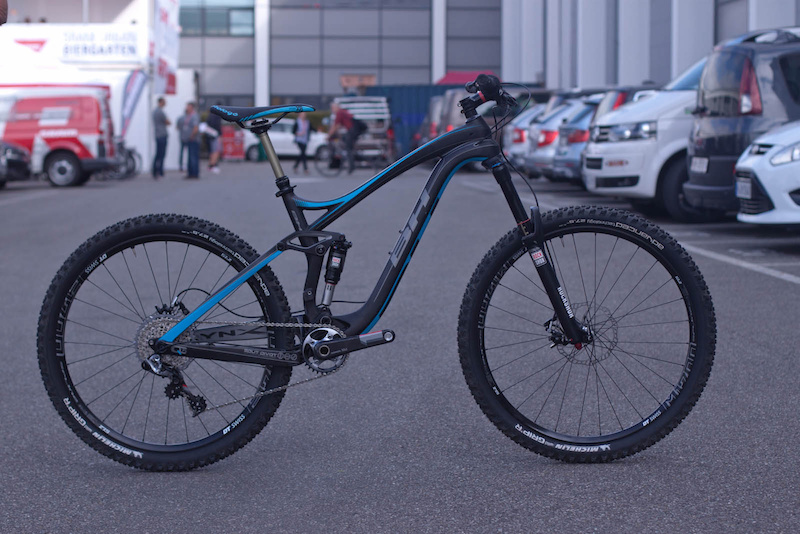 Spanish brand BH have worked with suspension guru Dave Weagle for a couple of years now and we first saw their Lynx trail bike using his Split Pivot suspension system at Eurobike 2012. For their 2015 bikes they are releasing a carbon version of their Lynx 6, which they describe as their bike for "aggressive AM/light-enduro" riding - what we'd generally refer to here as a "mountain bike". The new bike is an evolution from the current aluminium version, sharing the same basic suspension layout and kinematic, but losing a signifcant amount of weight to bring the frame weight down to 4.6lbs (without shock) and upping the travel from 140mm to 150mm. One of the most important changes in the bike is the move away from the pierced seattube layout, this means the bike can now run the new generation of piggyback-equipped airshocks to help the bike cope with aggressive riding and long descents. Shifting the layout also means the frame can take an internally-routed dropper post - something you cannot do with the old design. Carbon also means they could completely re-profile the tubing with a dramatic, curving headtube and flowing lines all the way through the bike.

Geometry remains unchanged from the aluminium version. It also retains the same features as its aluminium brother, with a huge PF92 bottom bracket, ISCG05 mounts for a chainguide and a burly 142x12mm rear end. For the new carbon bike they are now coming specced with a 160mm fork at the front, which rakes the headangle out to 66 degrees, and the topline model features SRAMs XX1 drivetrain and DT Swiss' Spline Two wheelsets. The aluminium version will still be available too and both version will be available with three spec levels. Retail pricing is to be confirmed. 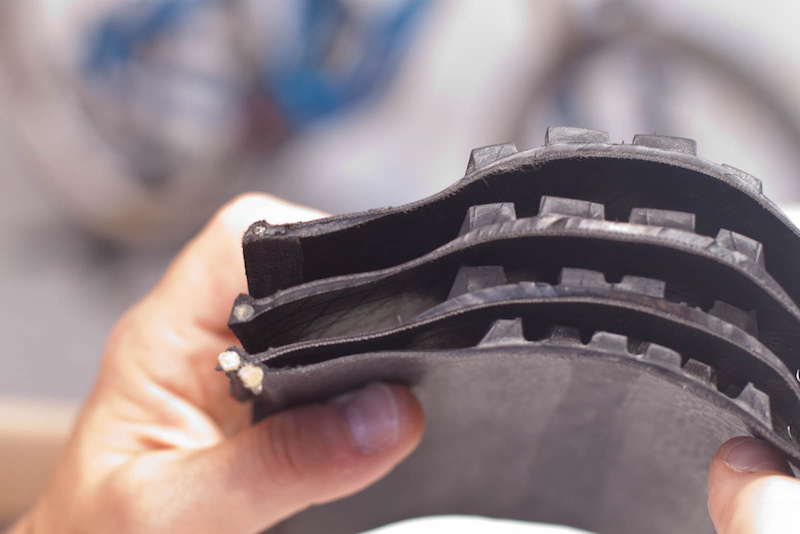 Onza are introducing a new casing for their gravity tires. Sitting in between their 850g lightweight, folding "Freeride" tires, and their 1,100g dual ply downhill casing will be their EDC casing, designed for enduro racing. Weighing in at around the 1kg mark it has a lighter, folding bead than the wire-beaded DH casings, with reinforced casing at the sides and a butyl layer. This means it should offer substantially more protection than a regular folding tire, at a noticeably lower weight than a full downhill tyre. The tread will use a dual compound, with a harder 65A compound for the side tread, and a softer, grippier 55A in the centre. This looks set to be noticably harder than many of its competitors, which although means a small compromise in terms of grip, should mean the tires last well out in the real world - an important consideration with the cost of tires these days. The new casing will be available for their Ibex, Citius and Greina tread patterns - offering a good variety of profiles for different conditions.

The Ibex, their best selling tire is now available as a 650b. It is their all-arounder tire, mostly for more wetter conditions. The Citius is a faster rolling tire than the Ibex, designed for dryer conditions 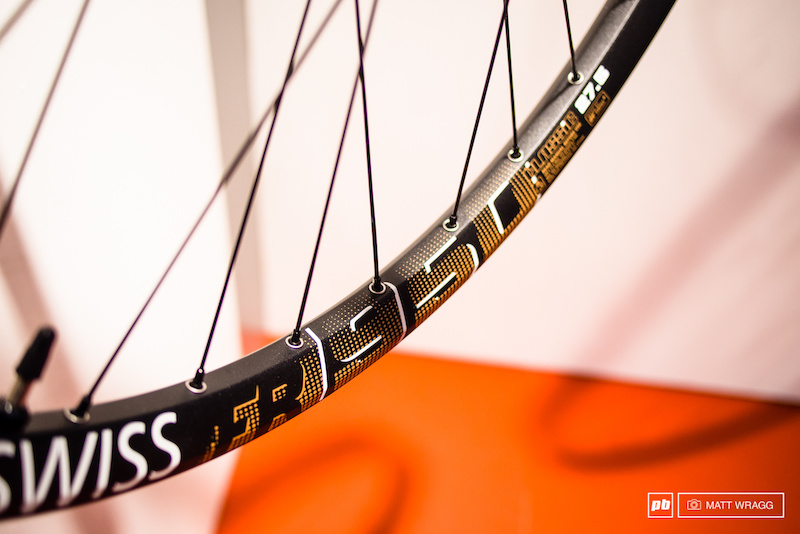 We were nothing but impressed when we reviewed DT Swiss' Spline One wheelset, and at the show they unveiled two new additions to the range. The big news is an entirely new wheel the FR950, the burliest version yet of this wheelset. Featuring a 27.5mm internal width and an external width of 33m, they are the biggest member of the lineup in every sense. In terms of technology, they use all the same technologies - such as the Squorx nipples, the modular hubs and the updated freehub body. One noteable addition is compatibility for a 20mm axle at the front, something we'd love to see trickled down through the range (DT hinted we may be in luck with our wishes at some point in the future). Seeing as the lighter EX471 rim that graces the EX1501 version of the wheels is the rim Gwin rode bareback down Leogang this year, we would expect these to survive all-out nuclear war. Weight for the full wheelset will be 2,200g and retail pricing is to be confirmed. 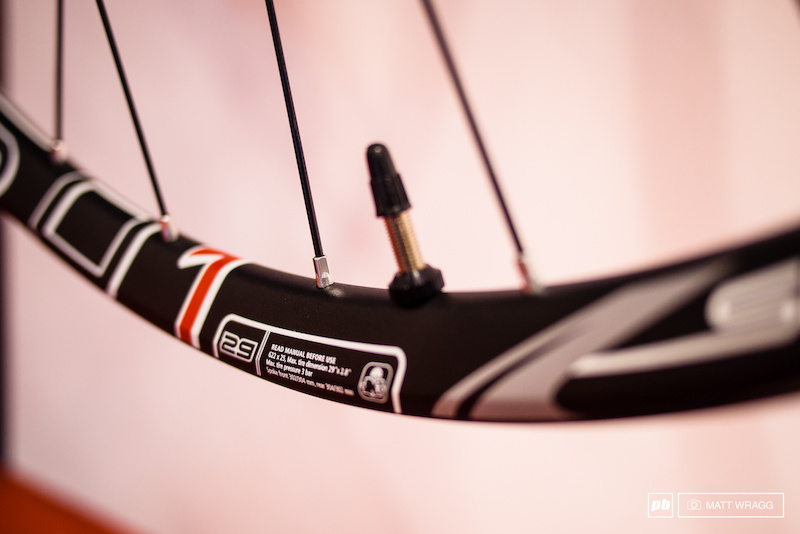 The other addition to the range is the EX1501 wheelset upped to 29 inches. In the last few years there have been a good number of aggressive 29ers, like Specializeds Enduro 29 and BMCs Trailfox, and this wheels is a recognition of that advance in 29er development. Other than the diameter, they are identical to the smaller versions in the range, with a 25mm internal width. They tip the scales at just 1810g and look set to be some of the toughest big hoops money can buy.

Check out all the images from Eurobike here.

ibishreddin (Aug 29, 2014 at 10:01)
Is anyone else tired of swoops carbon molds? I would like sum straight tubes, just sayin

groghunter (Aug 29, 2014 at 10:22)
It's going to be polarizing, some will love, some will hate. I think this is probably one of the better looking examples personally. No desire for a 650b bike with a 66 degree HTA, though. too slack bike is too slack.

groghunter (Aug 29, 2014 at 13:54)
If you look at some of the other BH bikes, the headtube in that shape is something of their trademark, the other Lynx models have a similar, though less extreme, profile, as do their Ultimate hardtails.

traildigger15 (Aug 30, 2014 at 0:21)
carbon bikes usually have "swooping" lines a you put it to increase strength. Forces are concentrated at corners and sudden changes in geometry. Therefore no corners = lower force concentration = strong but swoopy frames

Iamwarthog (Aug 29, 2014 at 14:08)
About those Onza tires. The description reads, "The tread will use a dual compound, with a harder 65A compound for the side tread, and a softer, grippier 55A in the center." Surely that's backwards. Has to be a typo.

Onza Dual Compounds are with the inner part of each knob in a harder compound, and a softer one in the outside of each knob. www.onzatires.com/111-1-3D-Cuts-examples-tire-technologies.html

Barkit (Aug 29, 2014 at 10:17)
I can't help to wonder how they manage to make photos of a standing bike without any apparent kickstand or wood stick to hold it. Must be invisible man doing a trackstand...

finnrambo (Aug 29, 2014 at 10:38)
I think Ian Hylands or another photographer said they would just hold up the bike and let go of it while taking a photo quickly... hopefully catching it before it hit the ground. I might be wrong though so don't quote me on that.

Barkit (Aug 29, 2014 at 10:53)
Wow really? I thought they would have some kind of magic sticky paste compound hidden behind the tyres or something similar...Interesting if what you say is true.

mikekazimer Mod (Aug 29, 2014 at 15:14)
@finnrambo has unlocked the secret. A bike will balance for a couple of seconds before beginning to tip over - plenty of time to snap a photo.

Jim-laden (Aug 29, 2014 at 13:53)
Can someone explain why a Fr tyre would be between Enduro and XC? I believe Zink and Andreu ride Fr, but they use DH tyres so why the name?!? The same for maxxis tyres!

bOObdesign (Aug 29, 2014 at 17:36)
that EDC casing and DH casing will die out as soon as schwalbe procore is available.... i think schwalbe will have big trouble to meet the demand

frizstyler (Aug 29, 2014 at 12:57)
yeah better idea to buy a FAG bike. unfortunately you will feel unconfident abroad with that

Sshredder (Aug 30, 2014 at 10:06)
Any one remember the Onza porcupine tire? It worked pretty good.
Below threshold threads are hidden