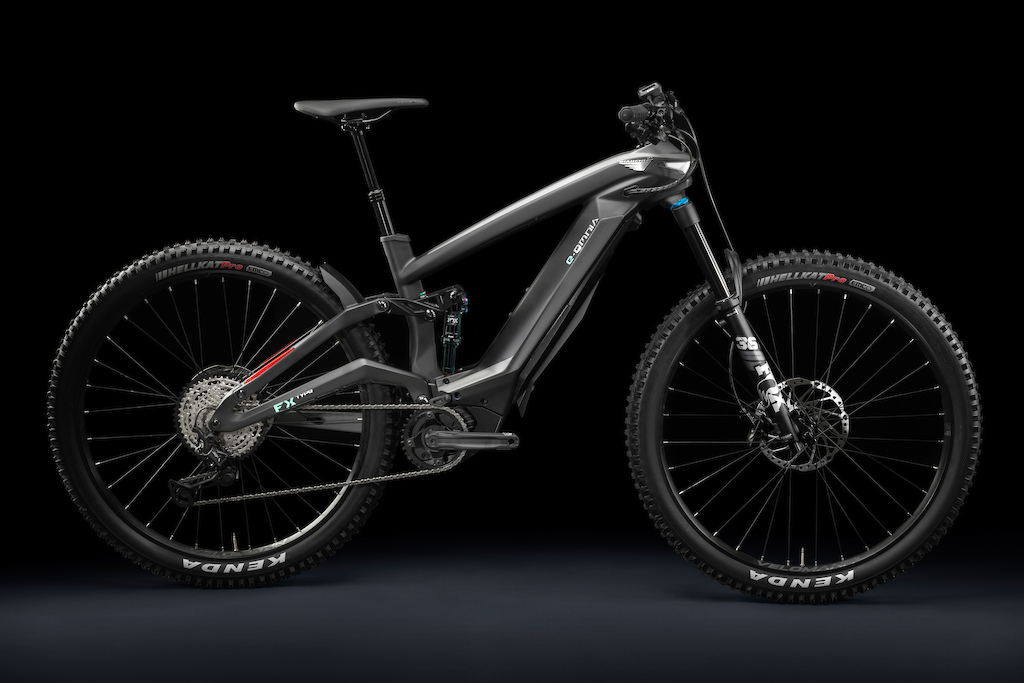 2021 is here and Bianchi have taken their e-bike game to an entirely new level. The brand's new E-Omnia bike aims to transform, quite literally, the way people see electric-assist bicycles. According to Bianchi, "Omnia" means "Everything" and there is an E-Omnia for every type of rider.

Bianchi say they wanted to create a new e-bike platform that would meet the needs of every type of rider, from trekkers, travelers, and tourists, to urban explorers, and commuters, to experienced mountain bike riders in search of the next great trail.

The new bike line Is based off Bianchi's e-SUV line and carries over design and function elements as well as the integration. The E-Omnia platform has MTB, Touring, and City models. We're just going to talk about the eMTB platform here though.

The bike is powered by a Bosch CX drive unit which provides 250w of power 85NM of torque, and up to 340% user support. There are 500WH and 625WH battery options as well as a dual battery option.

There are integrated lights on the front, side, and rear on all bikes allowing the rider to see and be seen. The lights put out 40 Lux for a visibility range of 100 meters, allowing others to see the rider from up to 500 meters.

There is an ABS option available on selected models (FT, T, FX, and X) which enhances rider safety and control on the road or trail, increasing stability and maneuverability under braking, according to Bianchi. 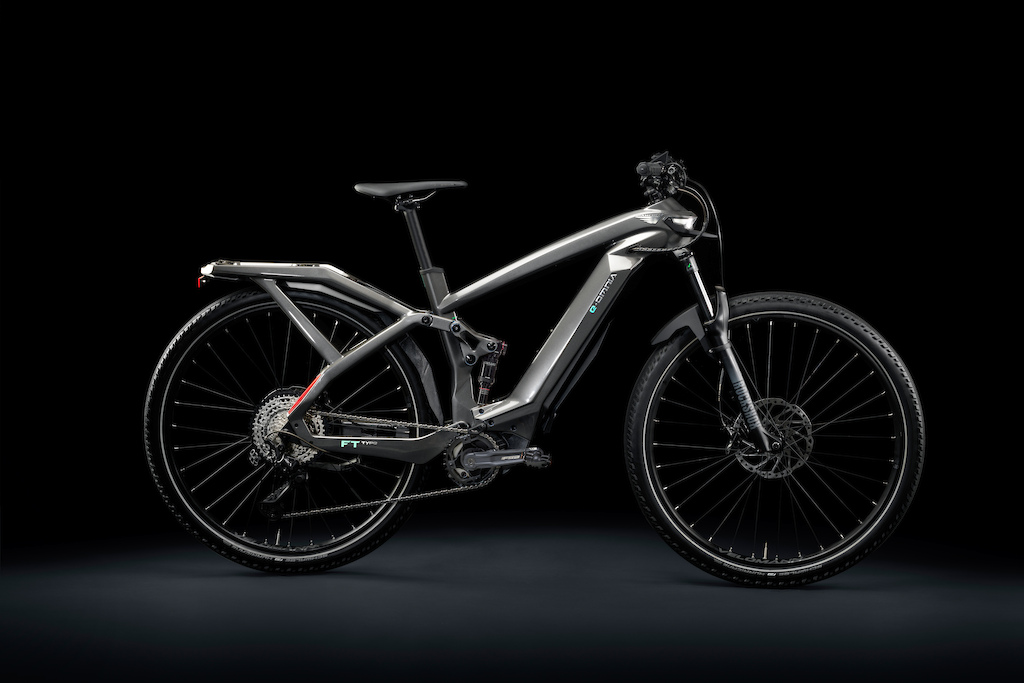 The E-Omnia is available in several different models but the mountain bikes are the "FX" and "X" Type.The "FT" or Full Tourer, is also full-suspension but built for touring.

The FX Type is the most capable eMTB in the E-Omnia platform. The aluminum frame has 150mm of travel and 29" wheels along with Fox or RockShox suspension, a dropper post, and Kendal Hellkat Pro tires. The assymetrical swingarm is designed to prevent chainstay damage and chainslap sound.

There are integrated mudguards on the headtube, crown of the fork, under the downtube, and along the back of the seat tube to handle muddy conditions. The bike is claimed to be able to provide power for up to 142 kilometers with a dual-battery set-up.

The bike is available with a Shimano XT or SRAM GX level build with either Fox or RockShox suspension. There's an option for an ABS front wheel to "increase safety".

The FX Type is available in sizes M-XL with the medium featuring a 65-degree head tube angle, 75.5-degree seat tube angle, and 440mm of reach. 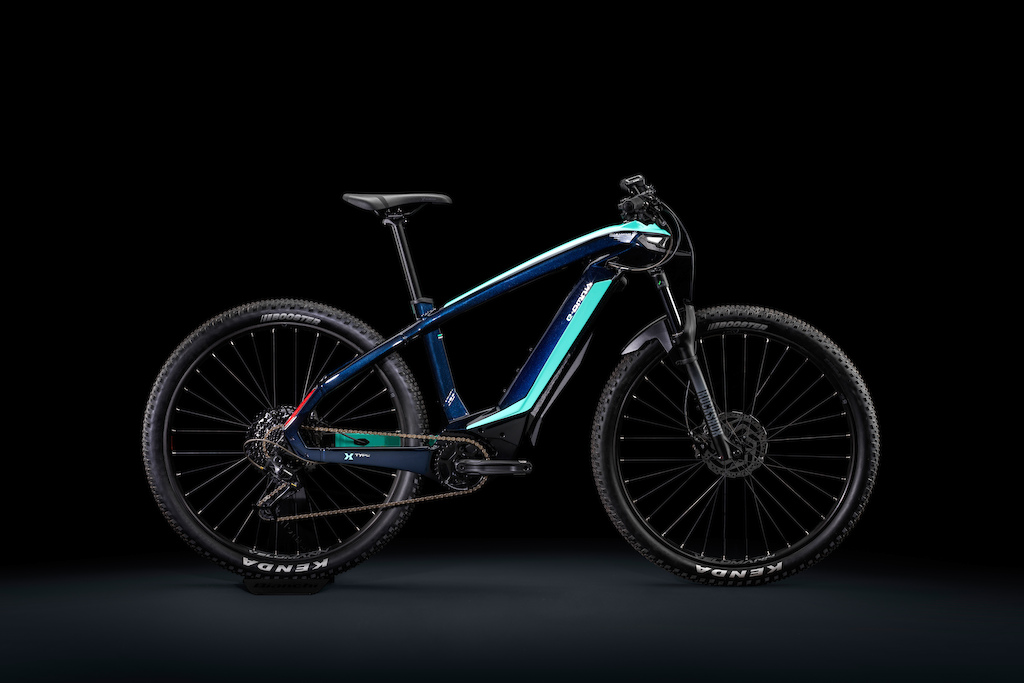 The X Type carries over many of the same features with the same general use in mind, but as a hardtail and at a lower price point.

Bikes can be configured to suit riders' needs with Bianchi's 3D configurator on their website to give up to 8,500 different color and spec combinations between the models. 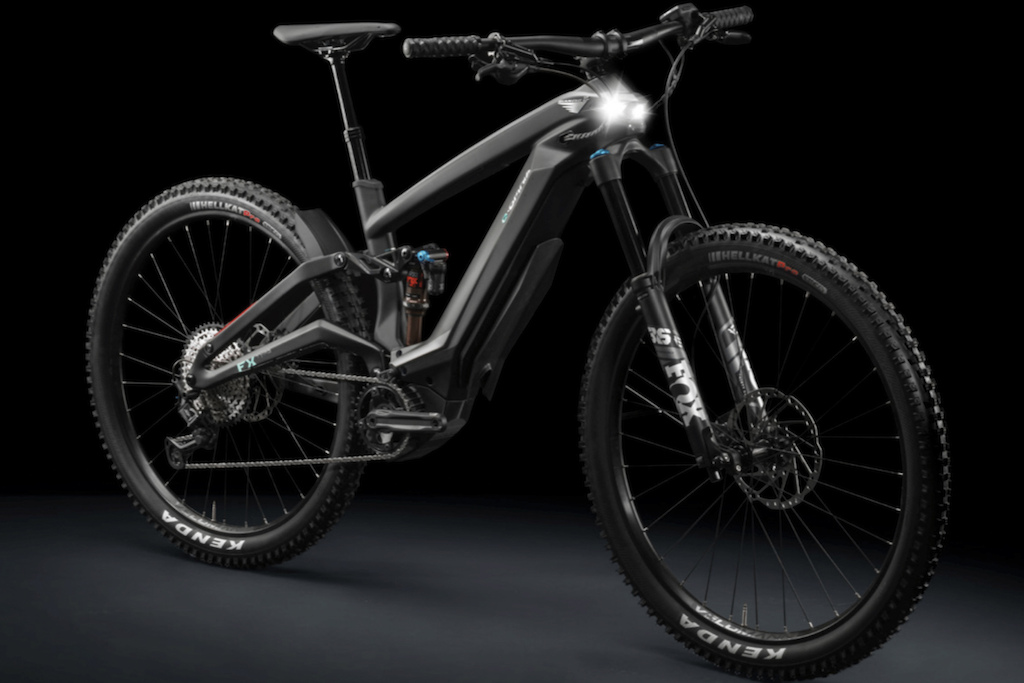 So, is the future here? Or would you rather be caught living in the past? Let us know in the comments below.

scott-townes (Jan 20, 2021 at 12:13)
It looks like something George Lucas would photoshop into the Empire Strikes Back further destroying his classic movies.

WasatchEnduro (Jan 20, 2021 at 12:17)
Well I sure wasn't wondering what the hell ever happened to Bianchi mtbs (thinking back to cool looking hardtails pre 2000) but now I know.

Looks like their road game is still dialed, tho.

The aesthetics have traumatized me! I'm going to need a counseling.

the problem IMO is theyre trying to make "ebikes" look like mountain bikes. you dont need to keep a traditional "down tube" and full length "seat tube" (now with dropper posts). id love to see some industrial designers have free rein and make these E-mopeds look...better

WildboiBen (Jan 20, 2021 at 15:34)
"They were too preoccupied with whether or not they could, they never stopped to think if they should."

hbar314 (Jan 20, 2021 at 10:36)
Would love to see this in the tandem version. Etandem is probably the biggest untapped, then tapped, then re-untapped market that there is.

spudreau (Jan 20, 2021 at 12:27)
I'll wait for the version that comes with turn signals, mirrors and the new Motionless Drivetrain System where your crank is fixed in place and you just rest your feet on the pedals and it goes... www.ktm.com/en-us/models/e-ride/freeride/ktm-freeride-e-xc2021.html

Who wants ABS on a mountain bike?

f00bar (Jan 20, 2021 at 13:26)
the people who have never ridden a mountain bike before that bought an ebike because of covid only to find out that they can't control it

tomonda (Jan 20, 2021 at 13:28)
I've only seen it on eBikes for the older generation. With the higher speeds they feel more comfortable with brakes that cant block, I would say it is indeed more safe for them. That generation usually finds disc brakes in general too aggressive. The ABS I've seen so far where mech disk brakes with a power limiter, so the brake pads never get enough power to block the disc (but to decelerate them enough), no matter how much you pull them.

Bianchi uses the Blubrake ABS system. Works with hydraulic brakes as well and represents another control circuit on the ebike. 1.640Euro on top of the normal price seems very high end oriented. Very valid option though for some use cases. It adds safety especially in traffic.

It was the same thing with motorcycles, people were saying "we don't want additional complexity that can break, people have been riding without ABS for many years now". Howeveronce ABS was made standard, it resulted in fewer crashes.

thats-joe (Jan 20, 2021 at 15:55)
I recon it's much more oriented towards the commuting crowd which I think is a reasonable safety choice once the price comes down.

I do think that ABS makes sense on pavement, even for motorcycles. Sure, a pro can stop better than ABS much of the time, but most people aren't pros, so it is safer, especially in a panic situation. So as a commuting style bike, that makes sense.

But on dirt sometimes you WANT to lock the brakes, which is my main point. Sometimes you want to lock the rear wheel to pivot quickly(really useful when there is a huge layer of leaves on the ground), and what about "french turns", or anything else like that?

I've been away from dirt bikes/motocross stuff for a while. But does ABS exist for those types of motorcycles? I'd honestly be kind of surprised if it was a thing there.

In fact, some offroading vehicles have options to disable ABS for the same reason (ever try stopping on a steep sandy hill, or a dune, with ABS, you just float on top, while "manual" brakes dig in)

Sure, if you are decent rider. Most people riding bicycles are not. They are more likely to skid the brakes rather than modulate them, which can result in crashes.

TransforDerek (Jan 21, 2021 at 0:52)
I tried a city ebike with some Bosh ABS system a few years back. It was clearly marketed towards elderly people and makes total sense there imo. If you want to slow down just grab a handful of brake which you can do even if your fine motor skills are not really there anymore. I guess that the target audience for these Bianchis is not the young and avid mtber..

Uh, no. It’s already been shown that ABS can stop as well as any pro, or better, and it can do it consistently. You can always get max braking when you need it without having to worry about the consequences.

That being said, ABS would only make sense for the front brake.

WishIWazFaster (Jan 21, 2021 at 20:33)
@ocnlogan: The article says it's only offered on the front brake. I can't think of an everyday riding scenario where you deliberately lock the front brake to the point where the tyre loses traction. Nose manuals mightn't work but not many riders use them.

Danzzz88 (Jan 20, 2021 at 12:44)
Don't worry, these E bikes are edging ever closer to motorcycles, the weak legged mofos won't be saying they are just better bicycles soon.. rather they are shit motorcycles.

chris-brown225 (Jan 20, 2021 at 14:03)
ABS - abysmally but-ugly sightsore technology, all trail obstacles see this thing coming and run for the hills, meaning you don't have to brake. Built-in lights so you can sear the retinas of all your riding buddies to avoid the shame of having bought three ugliest bike of all time!

mtbikeaddict (Jan 20, 2021 at 17:14)
People say modern mountain bikers just want to buy a bike for what they don't have, to compensate... don't have skill, longer slacker geo, don't have good joints, more suspension, don't have strong legs/cardio, easier-pedaling big cassette drivetrains...
Well there we go. That's why e-bikers want this with ABS.

bhastey (Jan 20, 2021 at 19:30)
In other news: A man dies on an ebike during his daily commute, after taking his bicycle down a flight of stairs (definitely not recommended by PB). Apparently, the man's bicycle was equipped with ABS technology. He found himself in a fatal situation after the new technology "failed to work" when he wanted to slow down.
We reached out to the bicycle manufacturer, Bianchi, and they had this to say: "It is obviously a terrible situation. However, this gentleman did not purchase the option with an ABS equipped front wheel, which would have greatly increased his safety."

porkchopsandwich (Jan 20, 2021 at 11:02)
We need bikes like this to give us a great appreciation for a well designed visually pleasing bike.

Apersonwhoenjoysbiking (Jan 20, 2021 at 11:15)
I want one! If there is one thing i like its the bikes that anger people because its "ugly". I dont think bike get ugly, they all look cool to me. But thats my opinion and you may have your own.

ChiefSilverback (Jan 20, 2021 at 11:51)
The styling is something of an acquired taste, but the integration of the rack into a full suspension bike would be brilliant for bikepacking.

bluegoose86 (Jan 21, 2021 at 0:25)
Whoever did the Industrial design for that was either getting beaten with a stick or blind!

A1990ToyotaHilux (Jan 20, 2021 at 13:51)
Except the Fiat Multipla's design had actual purpose and despite it's bad looks is a really good and comfortable people hauler.

digitalsoul (Jan 20, 2021 at 14:57)
If Mountain Cycles designed an ebike, this is what the design would have looked like.

taletotell (Jan 21, 2021 at 7:13)
ABS is not for performance vehicles. Welding a rear fender on increases unsprung weight. Next