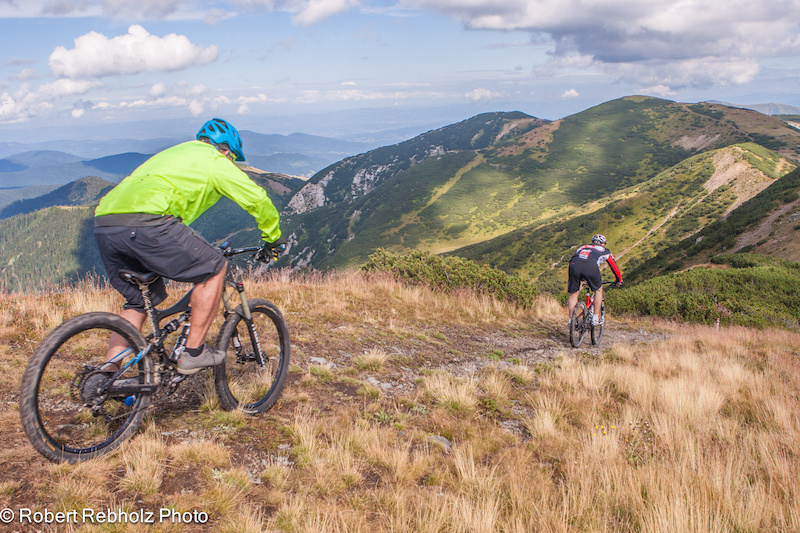 Located in Southeastern Europe, the Balkan Peninsula has long been a crossroads of the world. Traders, armies, messengers and migrating tribes have crossed through the varied landscape of the Balkans since the beginning of civilization. Thousands of years of people traversing from Europe to the Middle East has left an indelible mark on the culture of the region, as people of many of those ethnicities settled here. Greeks, Slavs, Turks, Germans, Gypsies and many others co-mingled, making one of the most culturally diverse parts of the world. The unique history of the Balkans is seen in modern life by the types of food people eat, the languages spoken and religion practiced.

At times the diversity of the region has led to combustible situations. In 1914, the assassination of the heir to the Balkan territories in Sarajevo led to the beginning of World War I. Most recently, the Yugoslav Wars of the 1990's were the deadliest conflict in Europe since World War II.

Bosnia and Herzegovina is located in the western Balkans and lies in the heart of the mountainous backbone of the region. This past summer I had an opportunity to visit Banja Luka, Bosnia's second largest city after Sarajevo, and was lucky enough to link up with some riders who knew the countryside well and were happy to show me the best trails. 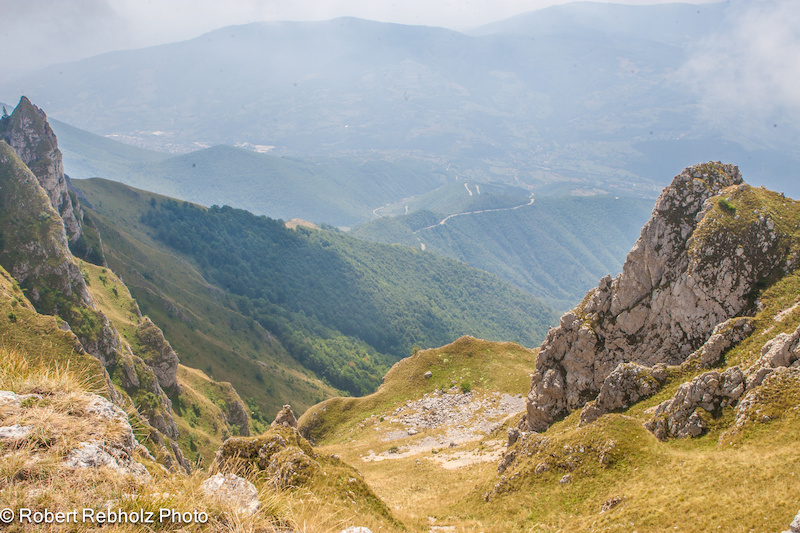 The first thing I did when I arrived in Banja Luka was to build up my bike and take a spin around the city. In my opinion, a street ride is the best way to get a feel for a new town. I was immediately charmed by the mix of old and new architecture.

Within minutes of cruising around, I met a mob of young riders. It was cool to see a group of "wheelie kids" ripping around the city, much like I did when I first fell in love with riding. They took me on a terrific tour of the city: first to the medieval castle on the Vrbas River, then by the oldest mosque in town and finally to the center square next to the Orthodox Christian church. 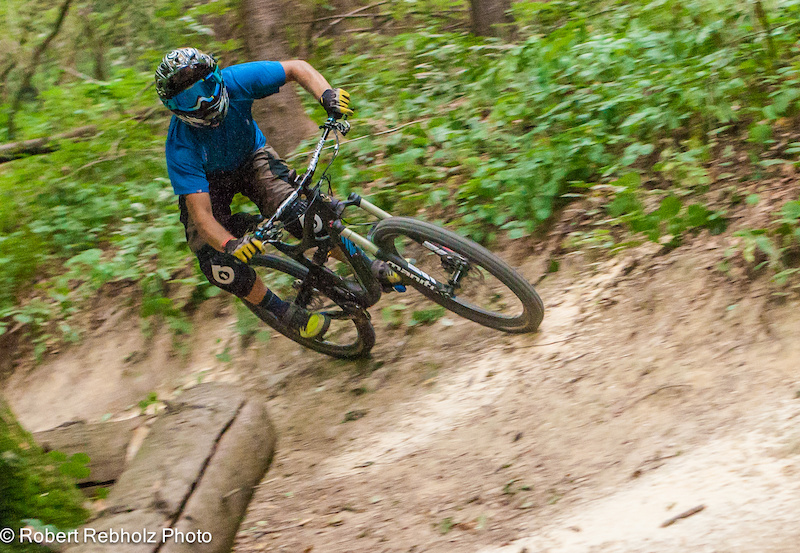 The next day I met up with Ozren Perovic, my main contact in Bosnia. Ozren was super welcoming and was happy to show me all of the best spots to ride in Bosnia. “Let’s start with our local spot right here in town, Banj Brdo,” he said with a smile.

Ozren explained that Banj Brdo is a recreation center located in Banja Luka and is popular for hiking, running and riding. On the paved climb to the trailhead, we had great views of the city as well as the mountains that surround it. 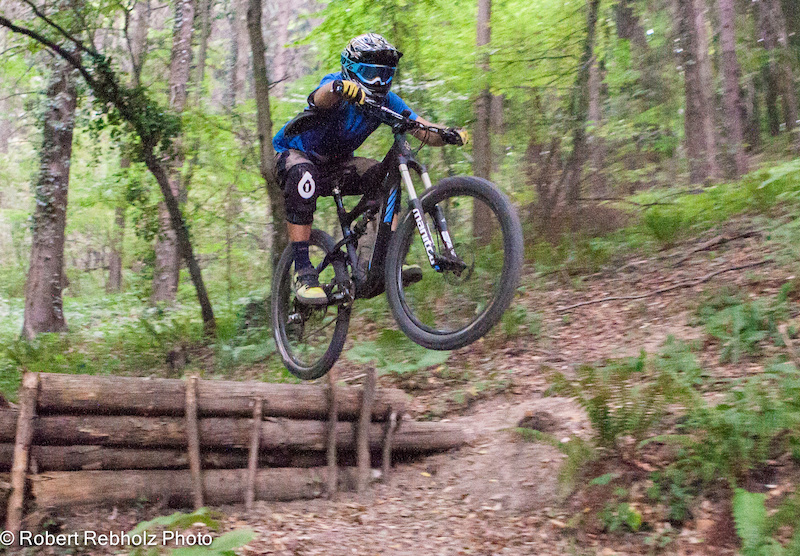 We pedaled up for 45 minutes until we reached the summit. Checking my GPS, I was impressed that we had climbed nearly twenty-two hundred feet. As we looked out over the city and the surrounding mountains, Ozren turned to me and said, “Not bad for a ride that can do out your back door.”

On our way down, Ozren stopped to show me some features on the freeride trail. Many of the jumps had some crazy sniper landings with do-or-die berms. Looking over the edge of one of the berms into the tangled ravine below, I knew that I had to meet the person who had built these technical lines. 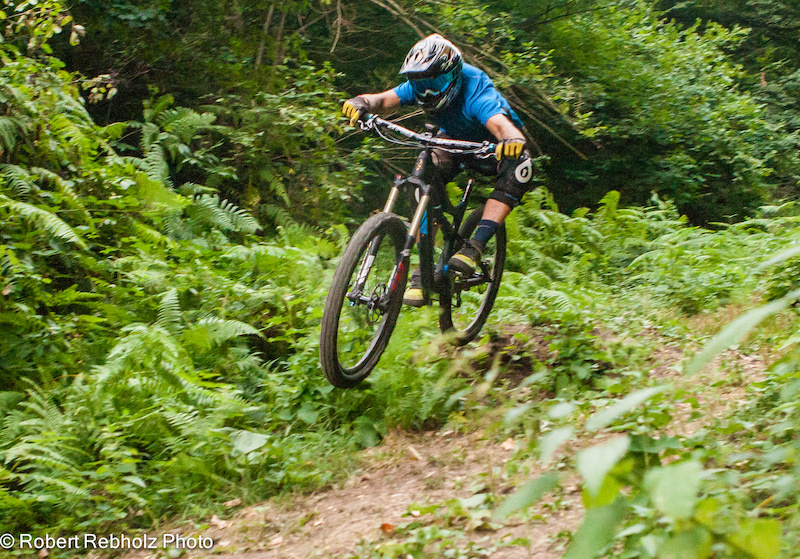 Ozren explained that Bosnian downhill racer Nikola Solomun was responsible for building most of the freeride track at Banj Brdo. The following day Ozren arranged for us to ride with Nikola on the track. 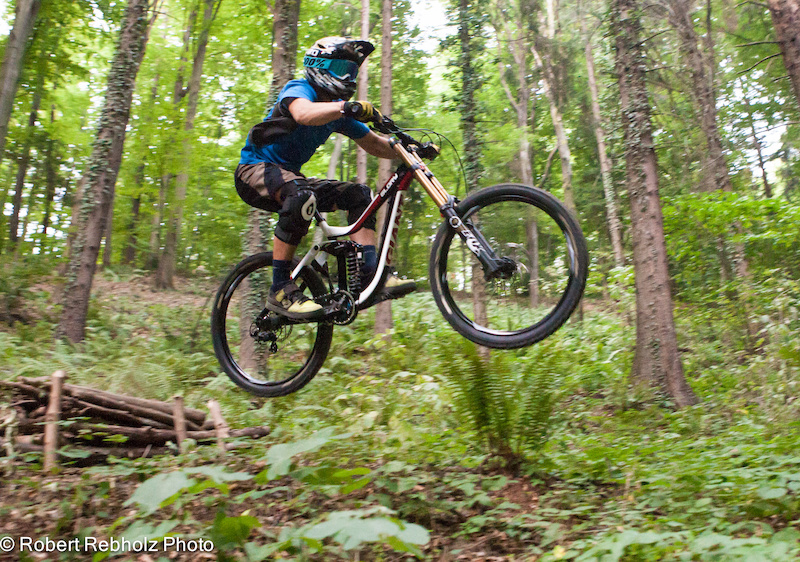 I met up with Ozren and Nikola at the bottom of the freeride trail and we pushed up to the top. Nikola pointed out the features on the trail and explained their construction.

“It’s very difficult to build a DH trail in Banja Luka because the scene is small and we don’t have enough people to work,” Nikola said as we pushed past projects under construction. “Everything goes very slowly with the building, but we have a lot of desire and our track will be ready for some serious riding in the spring.” 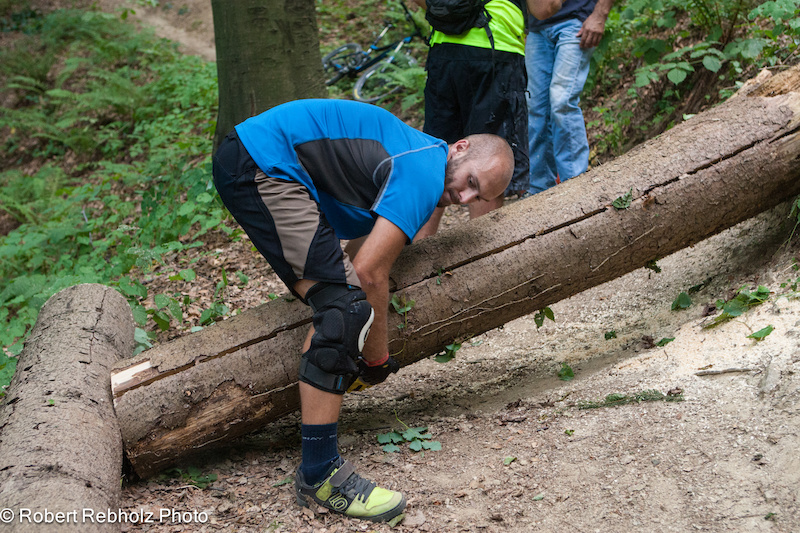 On our final push to the top, we came upon several felled trees blocking the trail. I asked Nikola if this was vandalism, thinking of recent cases in other parts of the world. “No, this is the work of someone carelessly removing wood from the forest,” Nikola said as he rolled an enormous tree trunk off the trail. 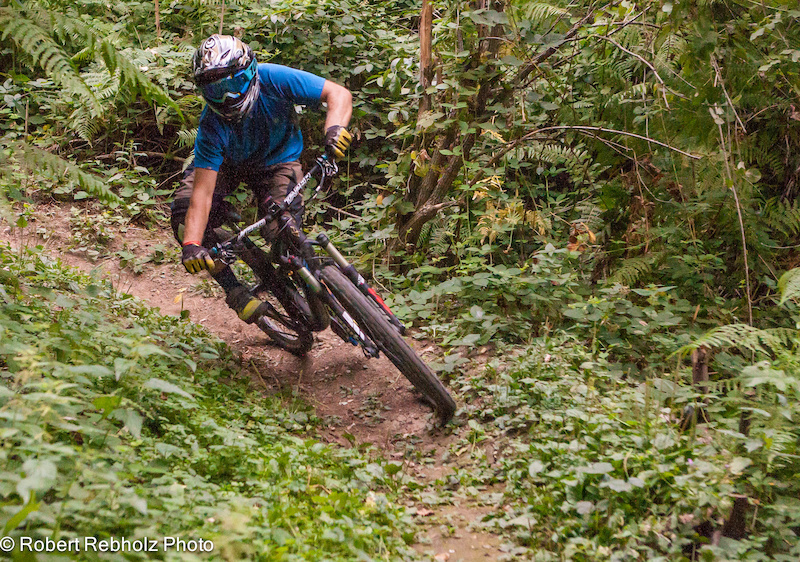 As we walked the track Nikola described other obstacles he has faced in creating the track. As he talked, it was easy to see his love and dedication to building and riding.

“We have a small downhill scene in Bosnia, with 40-50 riders,” Nikola explained. “We had an awesome city downhill race in Sarajevo two years ago that Filip Polc won. We had one DH race this year and hope to organize another for next year.” 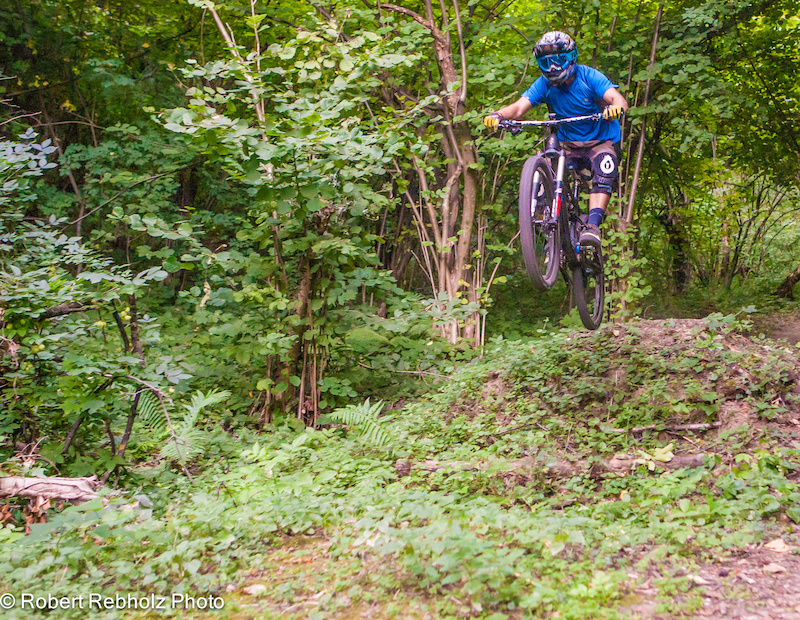 When we finally reached the top of the trail, Nikola hopped on his rig and pedaled hard into the first jump. It was awesome to watch him hit all of the features with style. After taking some time to session the step-down, we decided to pin it down to the bottom. 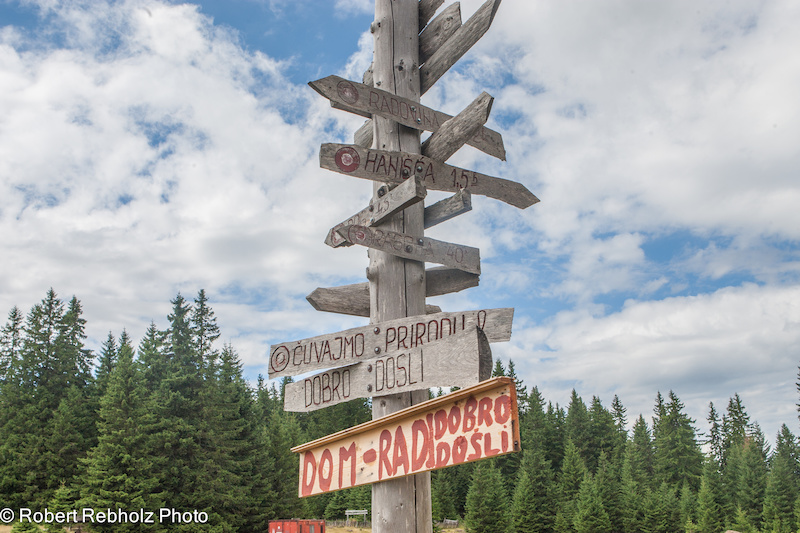 Banj Brdo was a super convenient and fun place for me to ride because it was just minutes from where I was staying. At the peak, my eyes would wander over the mountains spread out in every direction and the itch to explore them came over me. I knew that Ozren would know the best big mountain spots to ride. 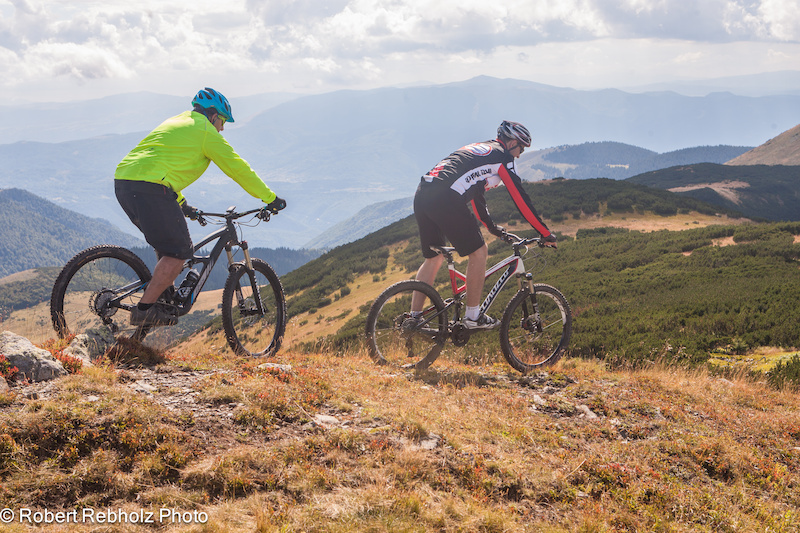 I called Ozren and he arranged for us to go with his buddy Sasa Maksic to Bosnia’s highest peak, Vranica. Vranica was a two and half hour drive from Banja Luka, so we were on the road before dawn heading to the 7,000-foot peak. 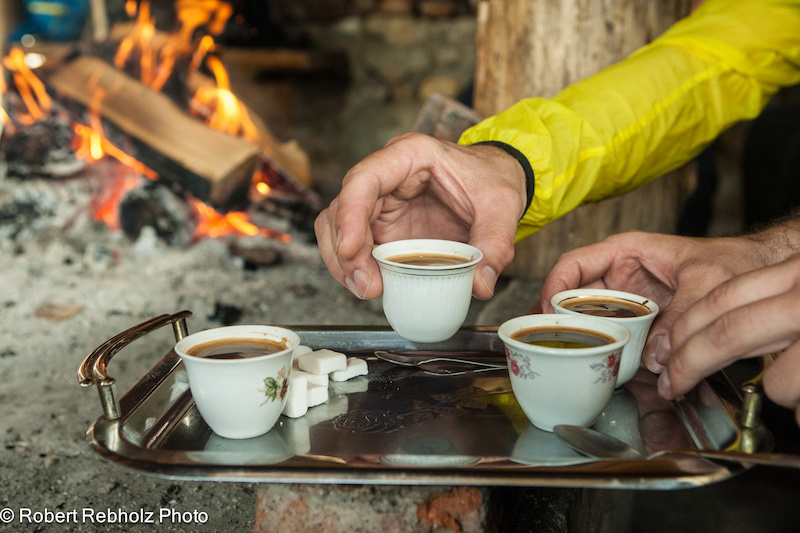 The mountain road to the peak of Vranica is very rough, so when the terrain became too much for Sasa’s low-slung performance car, we parked and began the ascent on bike. We climbed for about one hour until we reached a small mountain refuge house. Our hosts knew Ozren very well, and welcomed us with a nice toasty fire, strong coffee and great conversation. 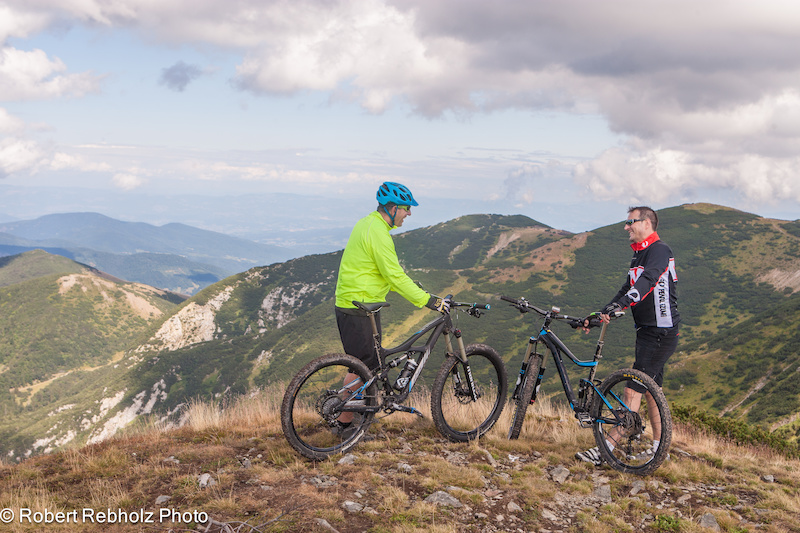 After warming ourselves for a bit, we began our final push for the summit. When the double track ended, we put our bikes on our backs and climbed up the steepest pitch to the top. The 360-degree view at the summit was absolutely stunning. 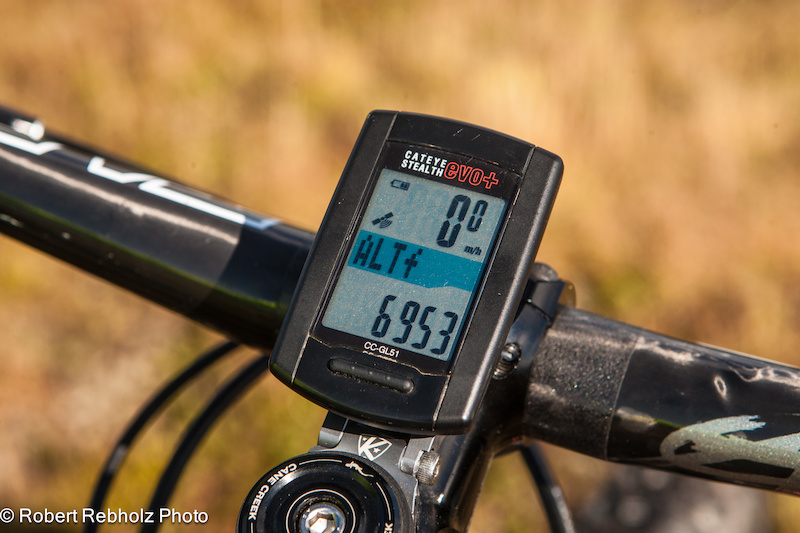 From the summit we rode a loop of wicked singletrack that connected the next five peaks of the Dinaric Alps. The plush suspension of my enduro bike came in handy when plowing through the occasional patch of rough chunder and loose scree. Even the double track back to the mountain refuge was a blast as we passed each other on the flat-out descent. 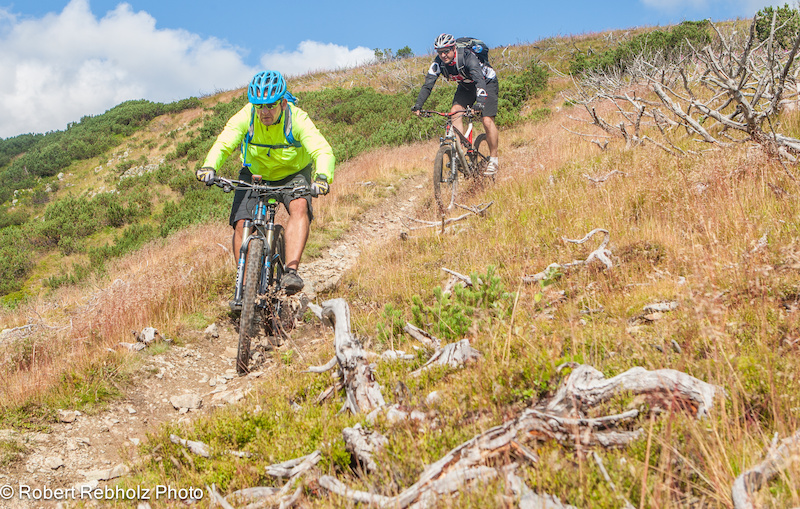 At the refuge, our hosts prepared a local delicacy called burek for us. The delicious flaky pastry can be filled with many ingredients like meat, cheese or vegetables, but we chose a hearty potato burek after our epic ride. It was awesome to sit and share a meal with Ozren, Sasa and the couple who ran the refuge. 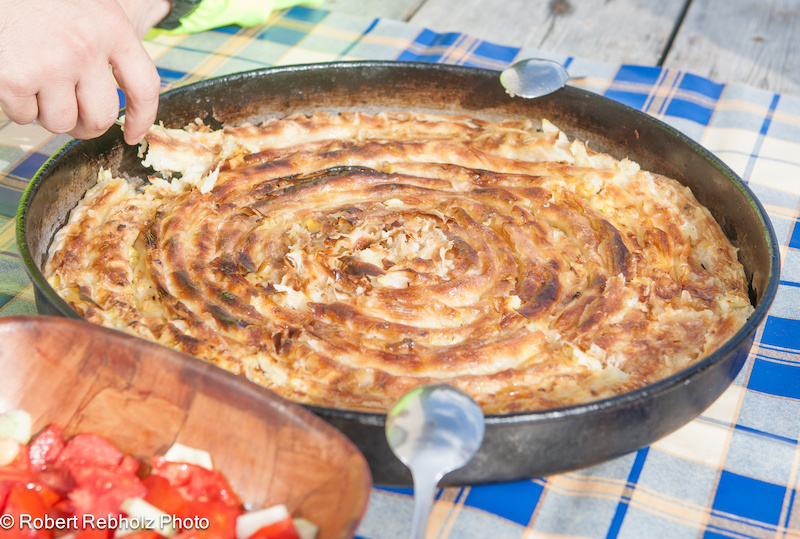 On the car ride home we planned out my final big tour in Bosnia. Ozren suggested an all-day backcountry ride starting at the 6400-foot peak of Vlasic and ending 40 miles later in the village of Siprage. I was stoked to try the big mountain epic and Ozren got busy arranging the details. 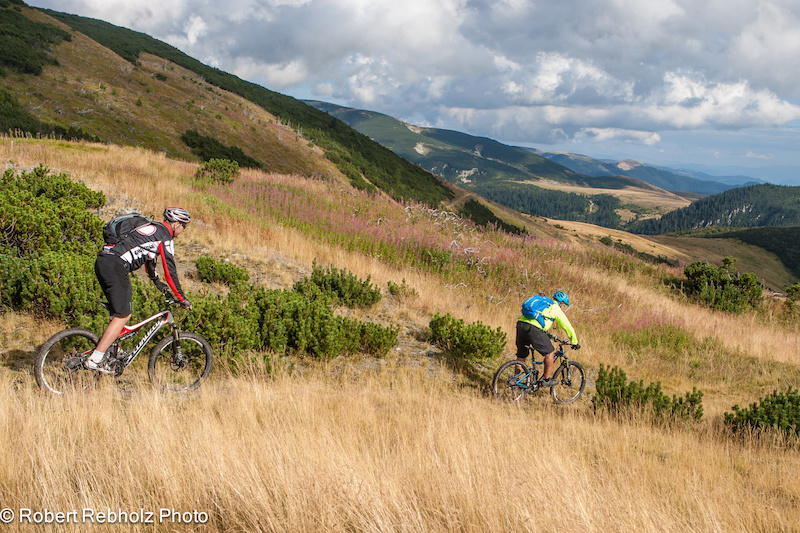 The next day Ozren gave me a call and explained how the tour would work. We would be joined by two other riders on our big day out, Fikret Muratovic and Salih Sundric. Nikola agreed to shuttle us as high as the car would take us up Vlasic and pick us up in Siprage at the end of the ride. 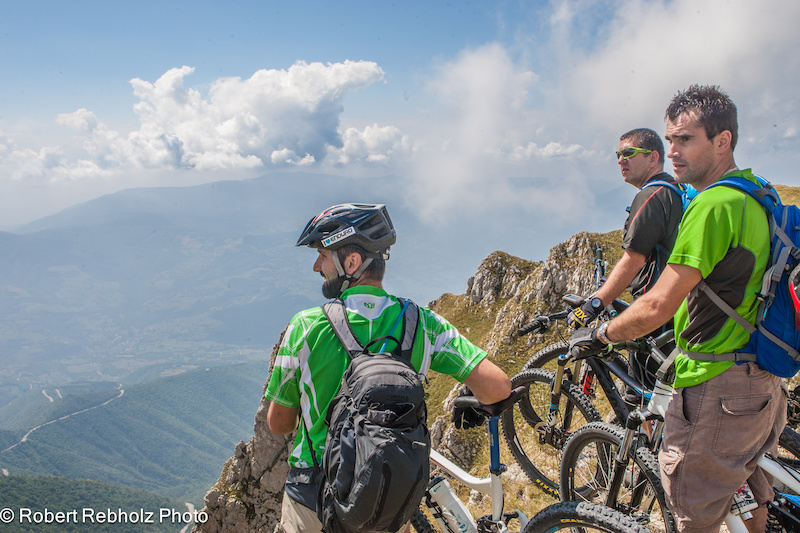 Our date to ride Vlasic was my final Saturday in Bosnia. The evening before I made sure to eat plenty of burek and handmade Bosnian sausages called chevapi. After dinner, I prepared my bag for our early morning departure and hoped my legs could handle what was in store for me at Vlasic. 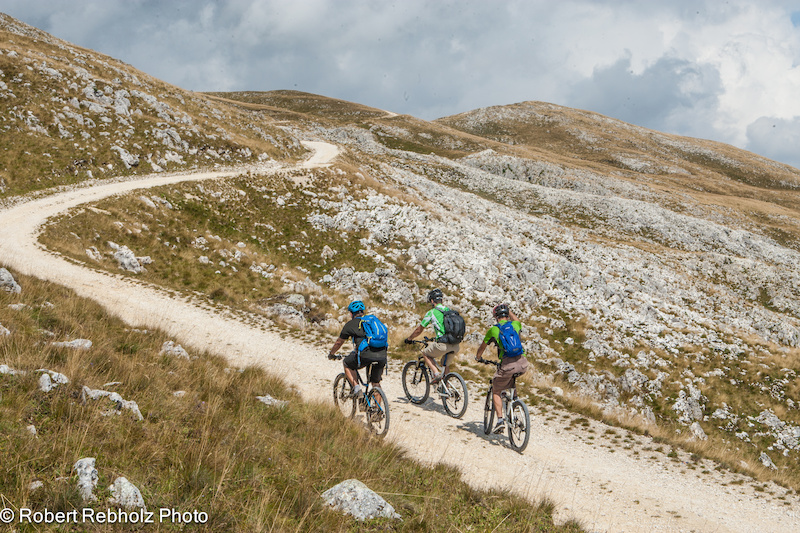 The boys picked me up at dawn and we were at Vlasic by the time I would normally be hitting the snooze button. Nikola shuttled us quite high up the mountain, so we only had a 30-minute ride to the peak. It was a clear day and the views were amazing on our climb to the summit. 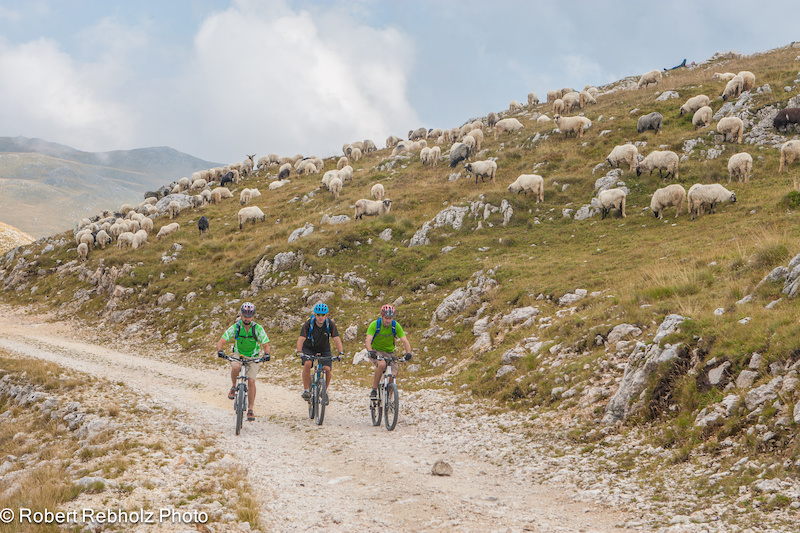 There were massive herds of Pramenka sheep grazing on the rocky landscape of Vlasic. Lightning fast Tornjak herding dogs took their cues from the whistles of the shepherds to move the herd in the proper direction. “At the top we will have some cheese made from these sheep,” Ozren said with a smile. 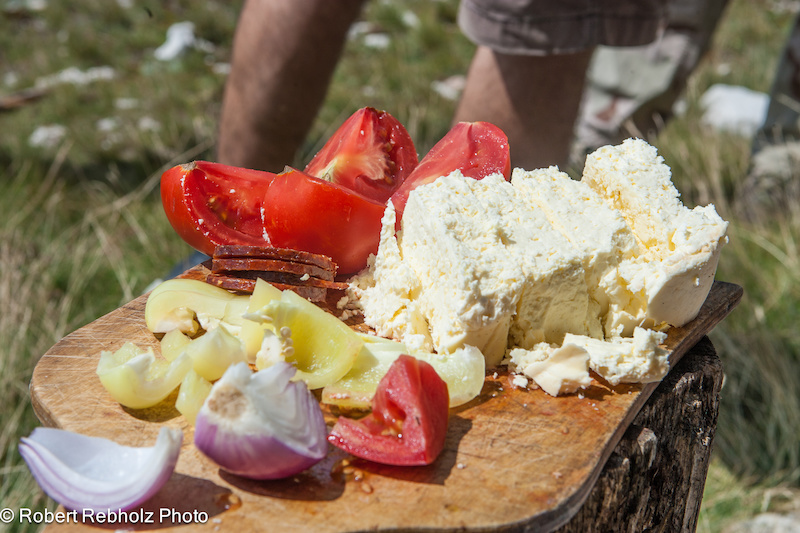 When we reached the top I was amazed by the view. It felt like we were sitting on top of the world.

Joining us were two hikers resting after a long trek. They invited us to join them in their great spread of homemade cheese, locally grown vegetables and fresh bread. We added some sausages and cheese of our own and had a feast at the top of the mountain.

As we enjoyed our lunch, Fikret pointed out the route we would be taking to the village of Siprage. “It’s important to always be with someone who knows the good way when you are riding in Bosnia,” Fikret said. “This area was highly contested during the war and has a large number of unexploded ordnances.” 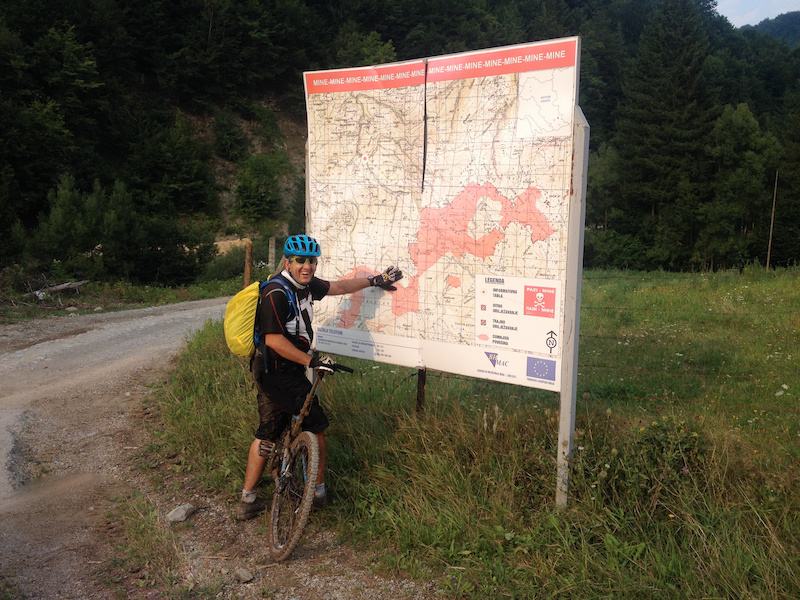 Fikret assured me that the trails we were riding were completely safe, but the thought of riding next to buried bombs rattled me. It was unbelievable that in this pastoral scene there were so many unseen dangers. As this fact sunk in, I asked Fikret more questions about the war. 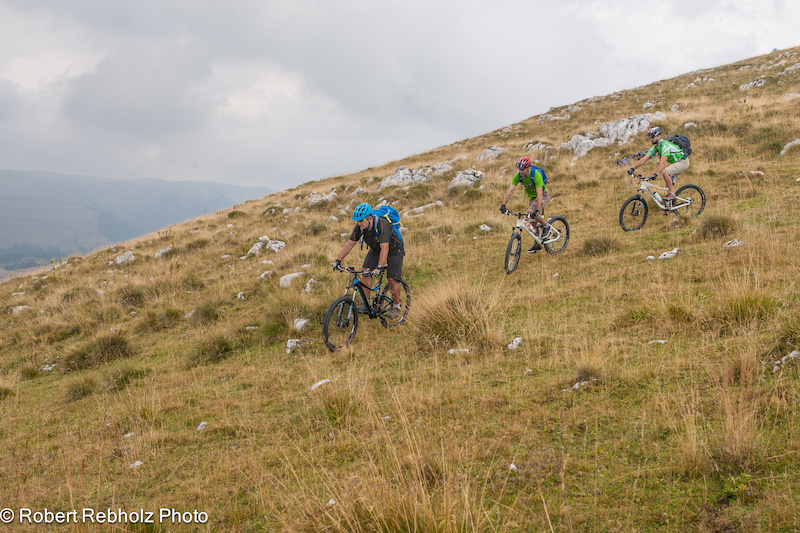 “Every family was affected by the war,” Fikrit said as he looked out over the horizon. “No matter if they lost someone or if a member of their family fought in the war.”

“On some of our tours, people who were in opposing armies during the war ride together,” Ozren explained. “Those who were once fighting each other, now share beautiful moments on bikes in the Bosnian mountains.” 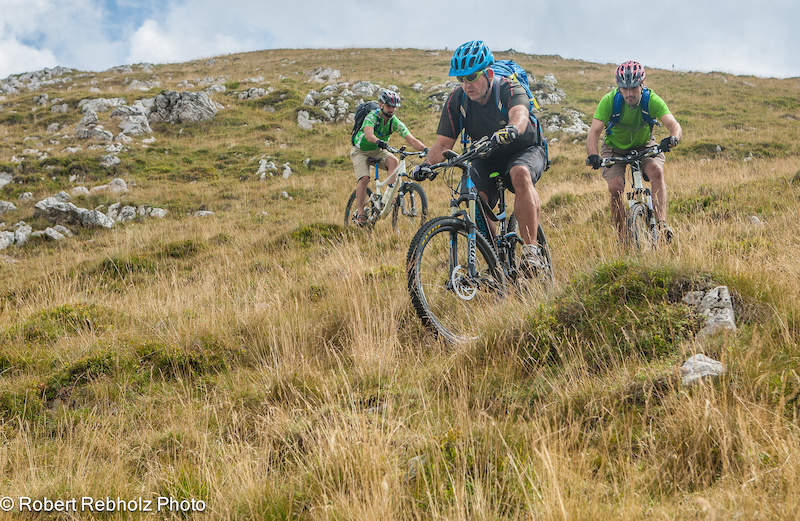 Even if in a small way, it was amazing that mountain biking helped people heal the wounds of the past. Bosnia is one of the most naturally stunning places that I’ve ever been to and I’m glad that I had the opportunity to visit. As we ripped the trail down to Siprage, I never felt more pride and gratitude for the sport of mountain biking. 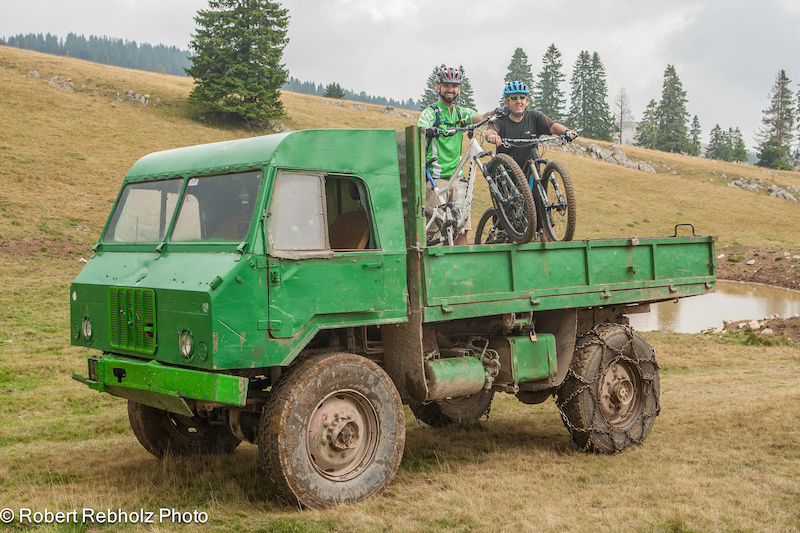 I want to take this chance to thank Ozren, Fikrit and Nikola for making my time in Bosnia unforgettable. I highly recommend visiting the group's website for more info if you are interesting in riding in Bosnia. http://uzbrdonizbrdo.com. They are offering tours of Vlasic and Vranica in 2016 and are breaking ground on new singletrack on Mount Vranica this spring. 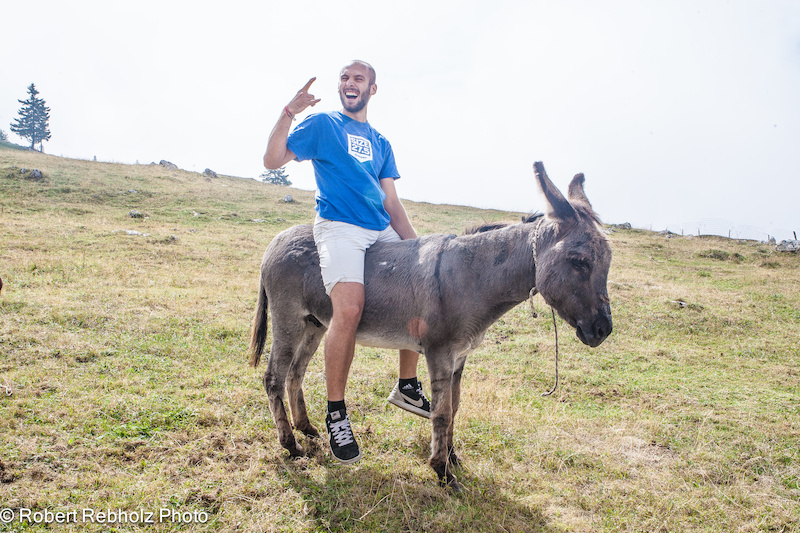 I also would like to sincerely thank all of the folks who helped me build an amazing bike for the trip. Big thanks to Hans Heim and Scot Nichol at Ibis Cycles, Scott Boyd at Hayes/Answer/Manitou, Joel Richardson at FSA, Robert Dranberg at LH Thomson, Jeff Wilbur Cateye, Brett Hahn at Continental Tires, Jon Hadfield at OneUp Components, Dave Watson at Sombrio, Blaike Hennessey at Thule, Bob Maas and Liam Walsh at Lake Shoes and Ronan at Moove Components. Also thanks to Jeremiah Stich at Bert’s Bikes in Tonawanda, New York for an outstanding build. 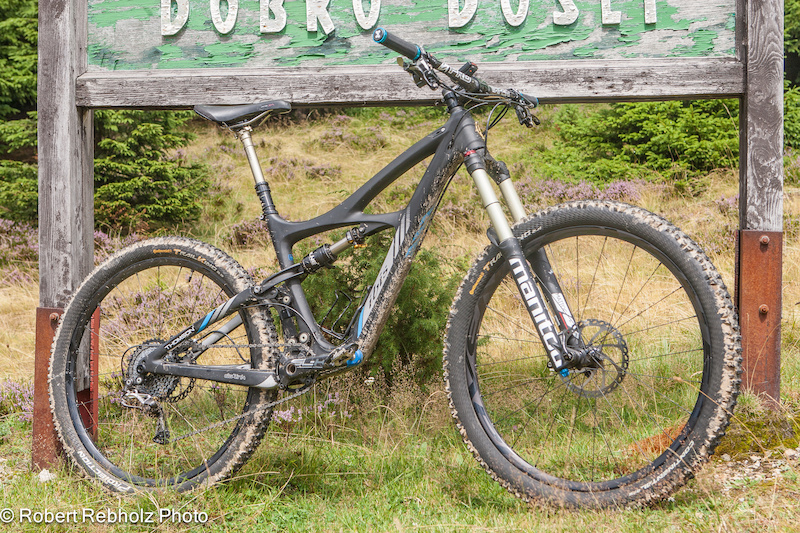 I would like to tour the whole country one day.

koubic8 (Aug 19, 2017 at 4:45)
Nice! I love Bosnia as well. We did a 8 day bike trip through Prokoško Jezero, Čvršnica (an awful lot of hike-a-biking), Konjic, etc. I published it and included GPX tracklog here: a href="http://www.shuttlekor.com/article/bike-bosnia-hercegovina">http://www.shuttlekor.com/article/bike-bosnia-hercegovina/a>