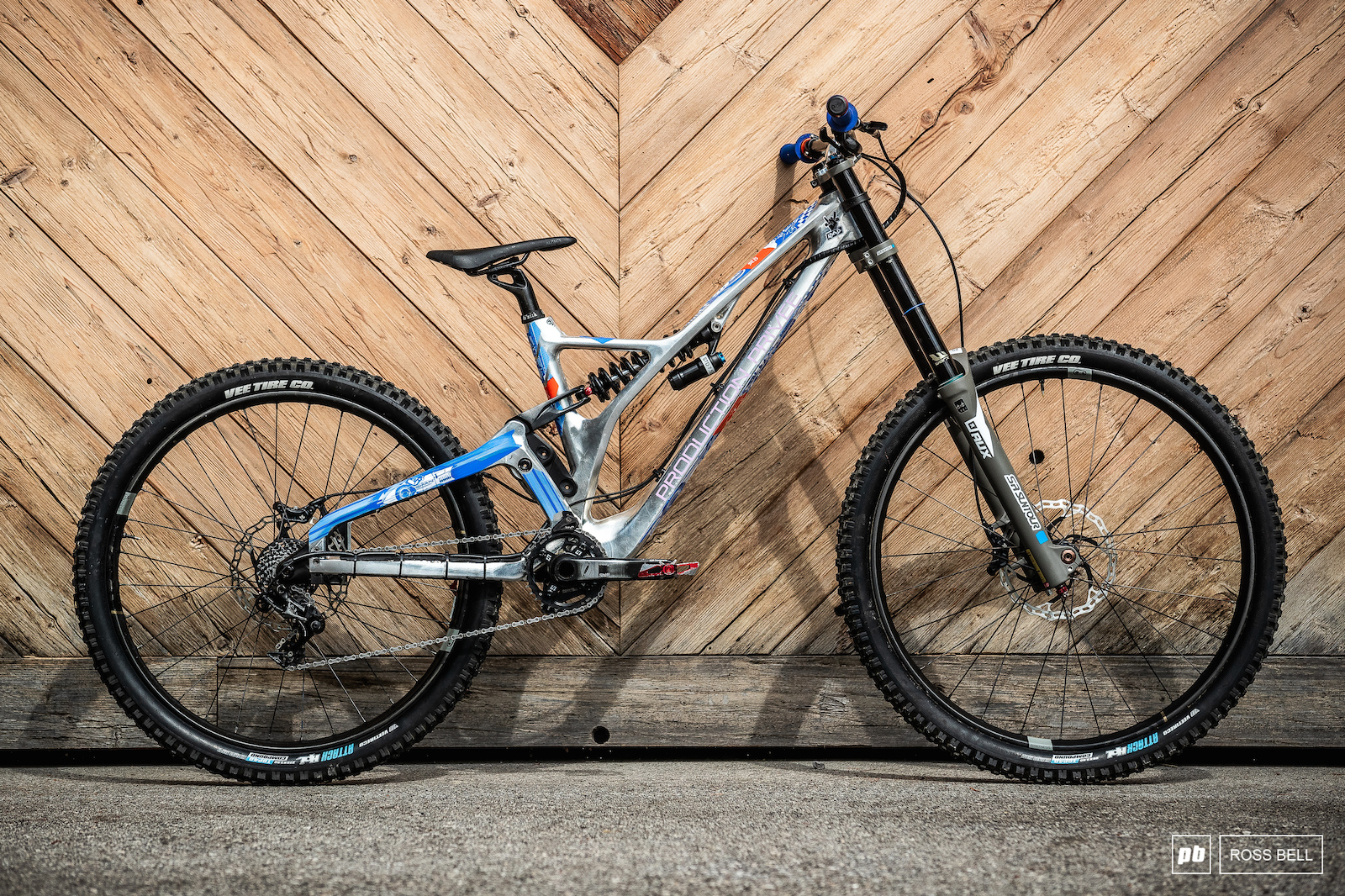 BIKE CHECK
Alex Marin's
Production Privée Downhill Bike
Photography by Ross Bell
Born in Andorra, the heart of the Pyrenees Mountains, Production Privée has set out to build a very elegant, yet industrial downhill bike, aimed to be highly competitive for racing.

At no expense spared, the R&D process went from drafts to a finished prototype in just 3 months. Production Privée says in-house CNC'ing was the key to this success. Forestal Bikes had some influence based on their Twin Levity system; a single pivot with a linkage-driven shock.

Both the front and rear triangles are two separate halves. Four pieces are cut from a solid block of aluminum, carved out in calculated places to shed weight, and then welded together. The bike looks straight out of a Terminator movie.

We took an in-depth look at the yet unnamed downhill bike back in February. 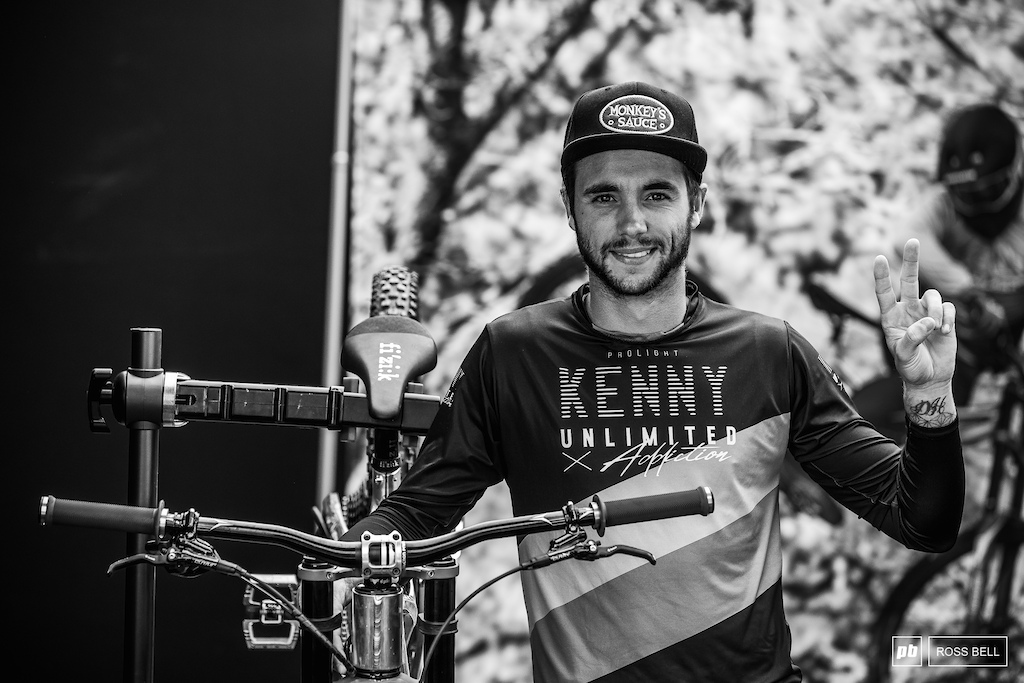 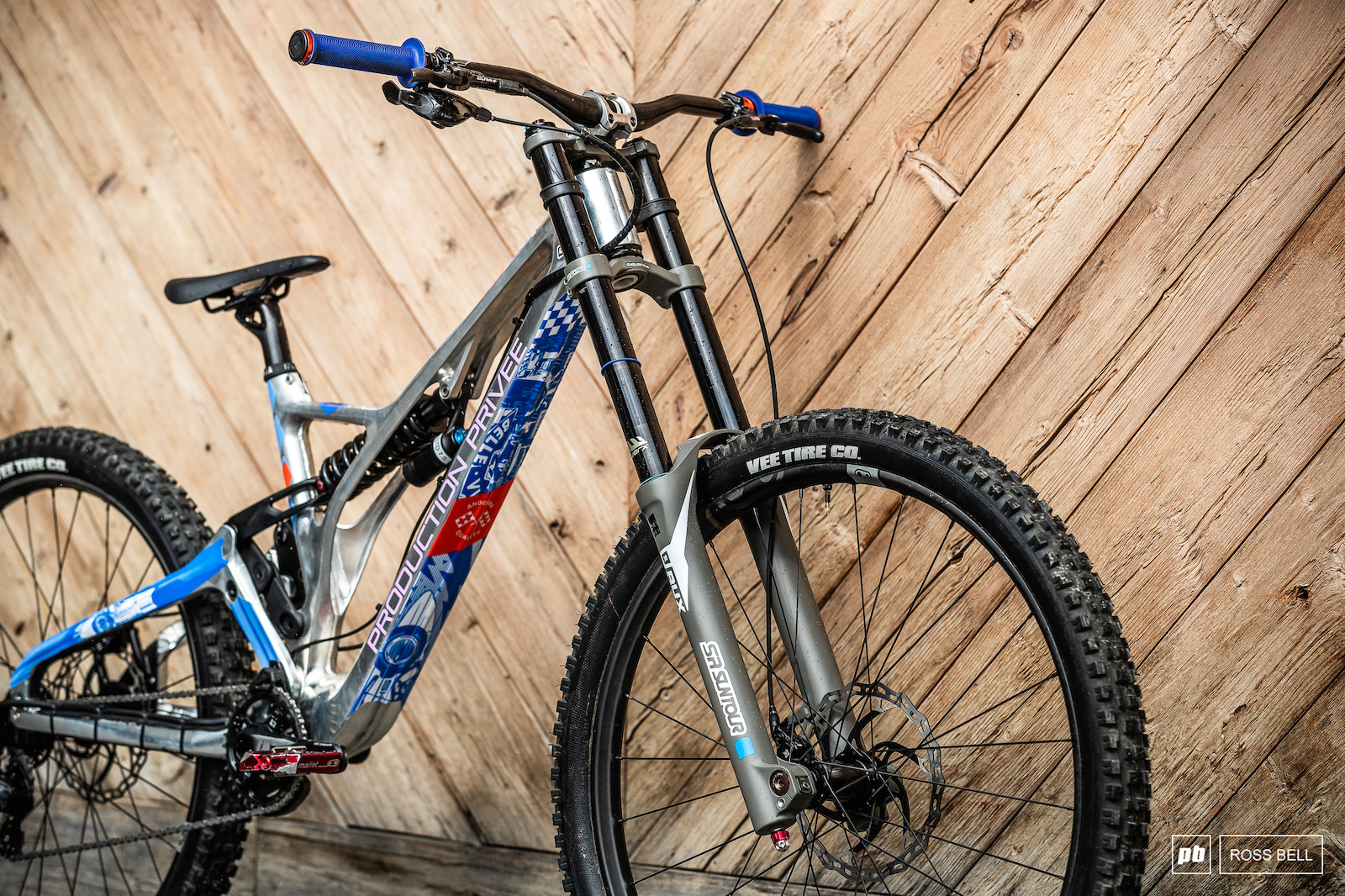 The reach is similar to the medium Santa Cruz V10 MX he rode last season. If this bike was made in the USA, it would be dubbed, Production Pabst. 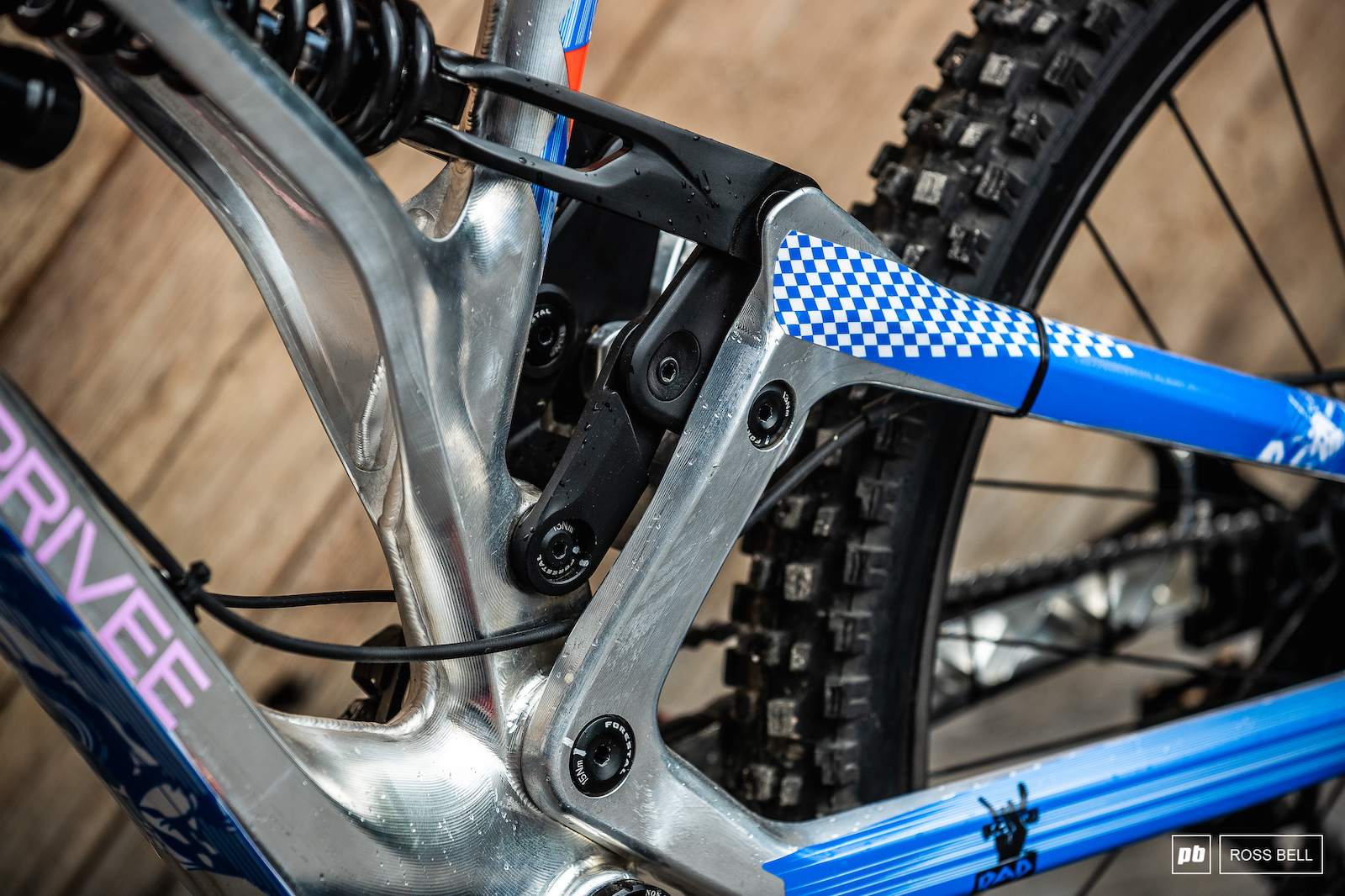 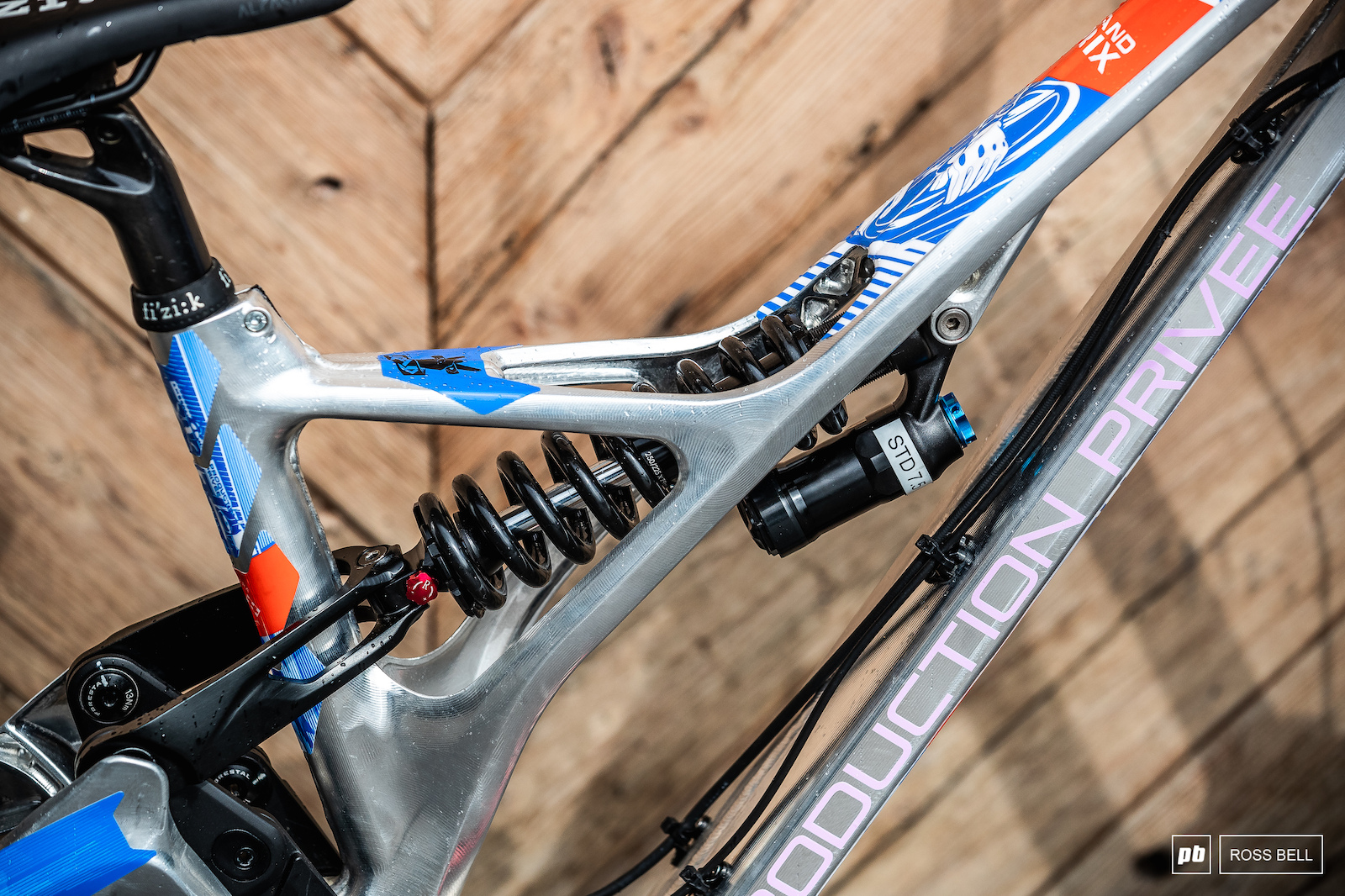 Links on links, but the rear axle still moves in a fixed arc. You can see how much material has been removed from the inside of the frame walls around the seat mast. 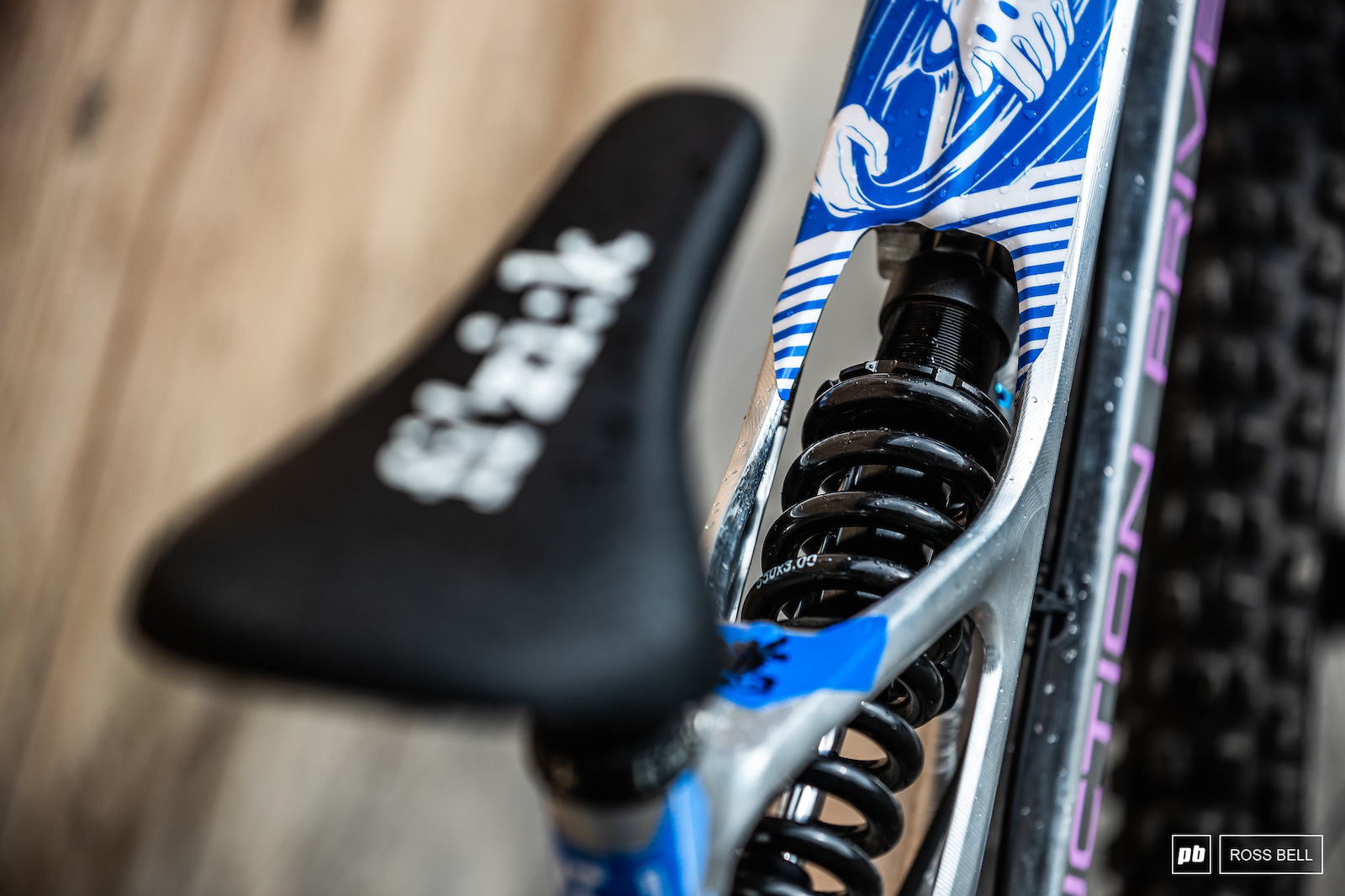 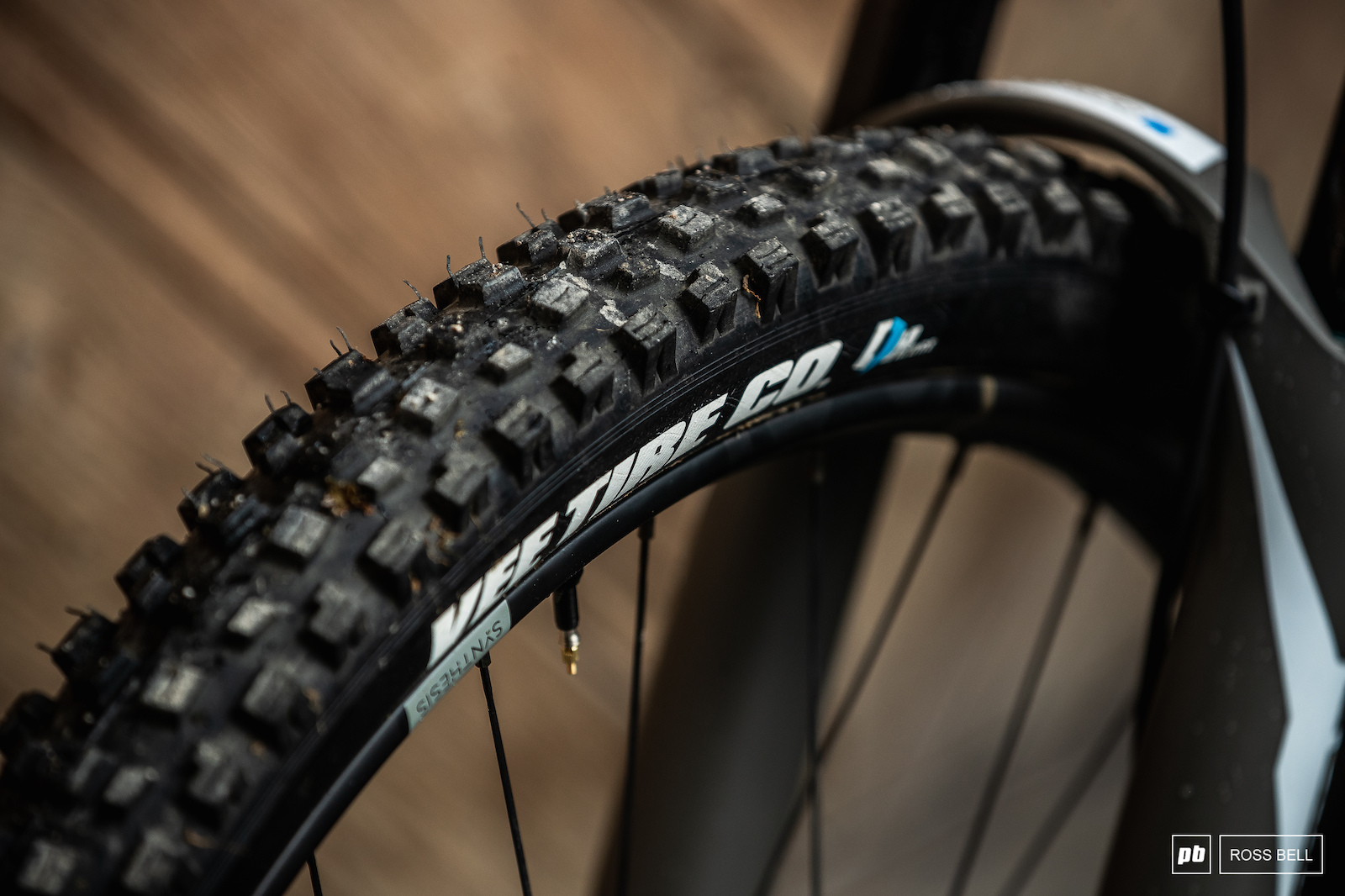 Alex has moved up to a 550 lbs spring which only produces 13% sag. He insists that the bike still has great small bump compliance, but he had to increase the fork pressure to 73 PSI to balance things out. The rear shock has the high speed compression fully opened with minimal low speed compression damping. Suntour only produces the Rux fork for 27.5 wheels at the moment. Clearance is tight and mud clogs could be a concern this weekend. 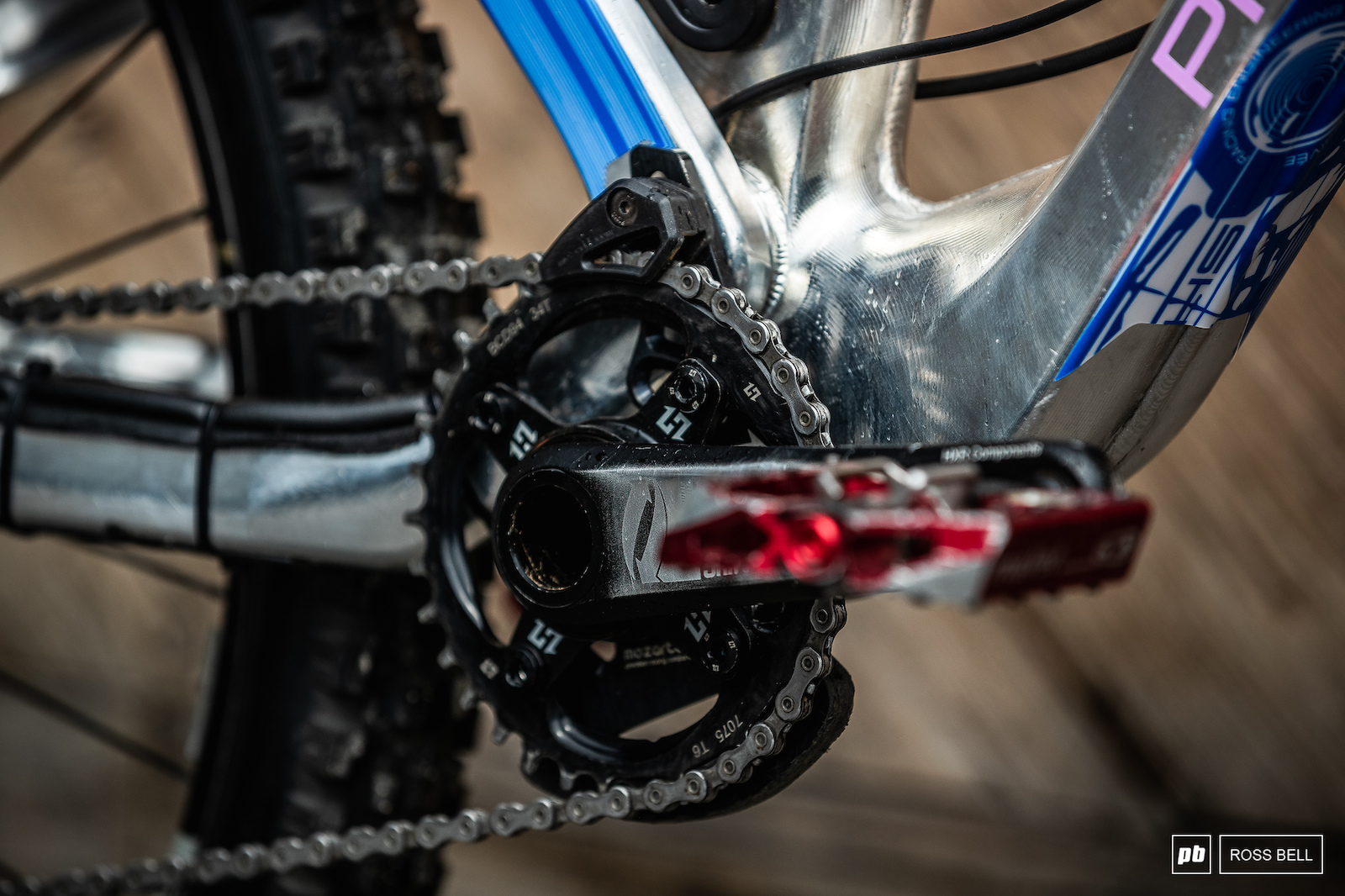 How many times have you been caught in a high gear? HXR's Easy Shift system uses a fixed rear hub and moves the freewheel to the crank arm spider. If the rear wheel is rolling, the chain will turn, letting you shift without any pedal strokes. 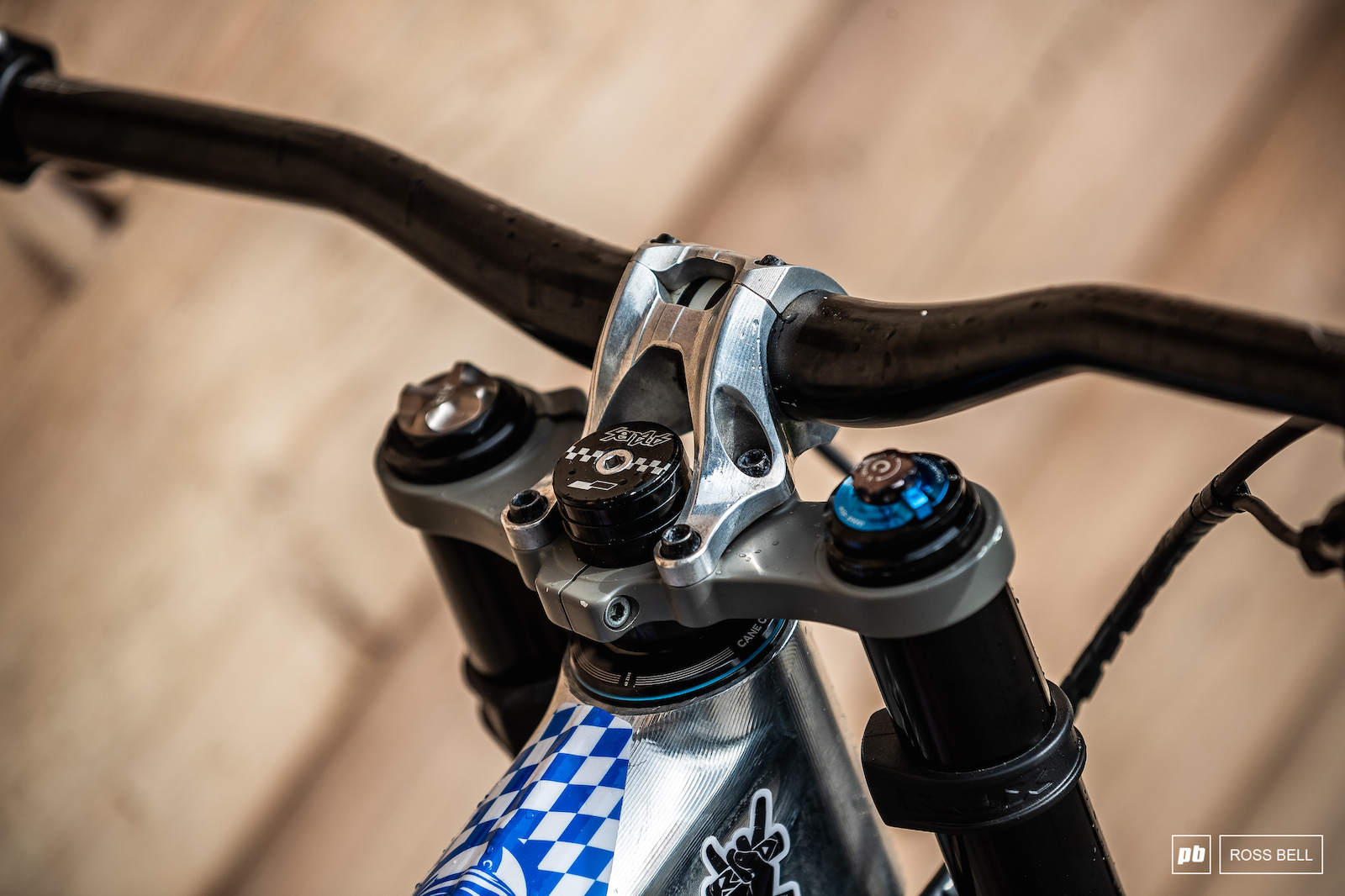 Production Privee's first products to market were this 50mm long stem and 31.8mm handlebar that Alex has cut to 780mm width. 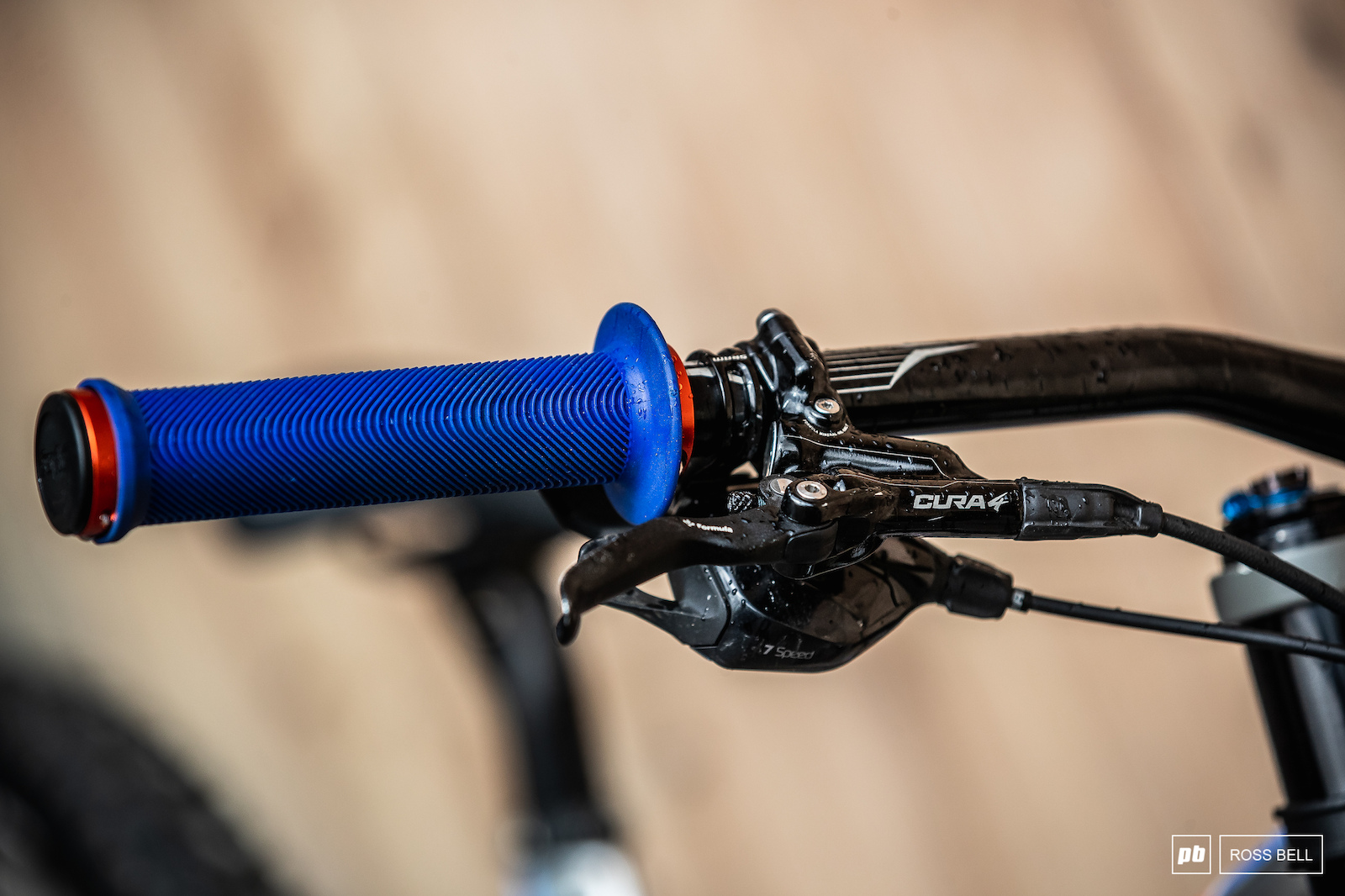 The Sensus Swayze lock-on grips are a must have for Alex. Like many other racers, he is very particular about his controls. 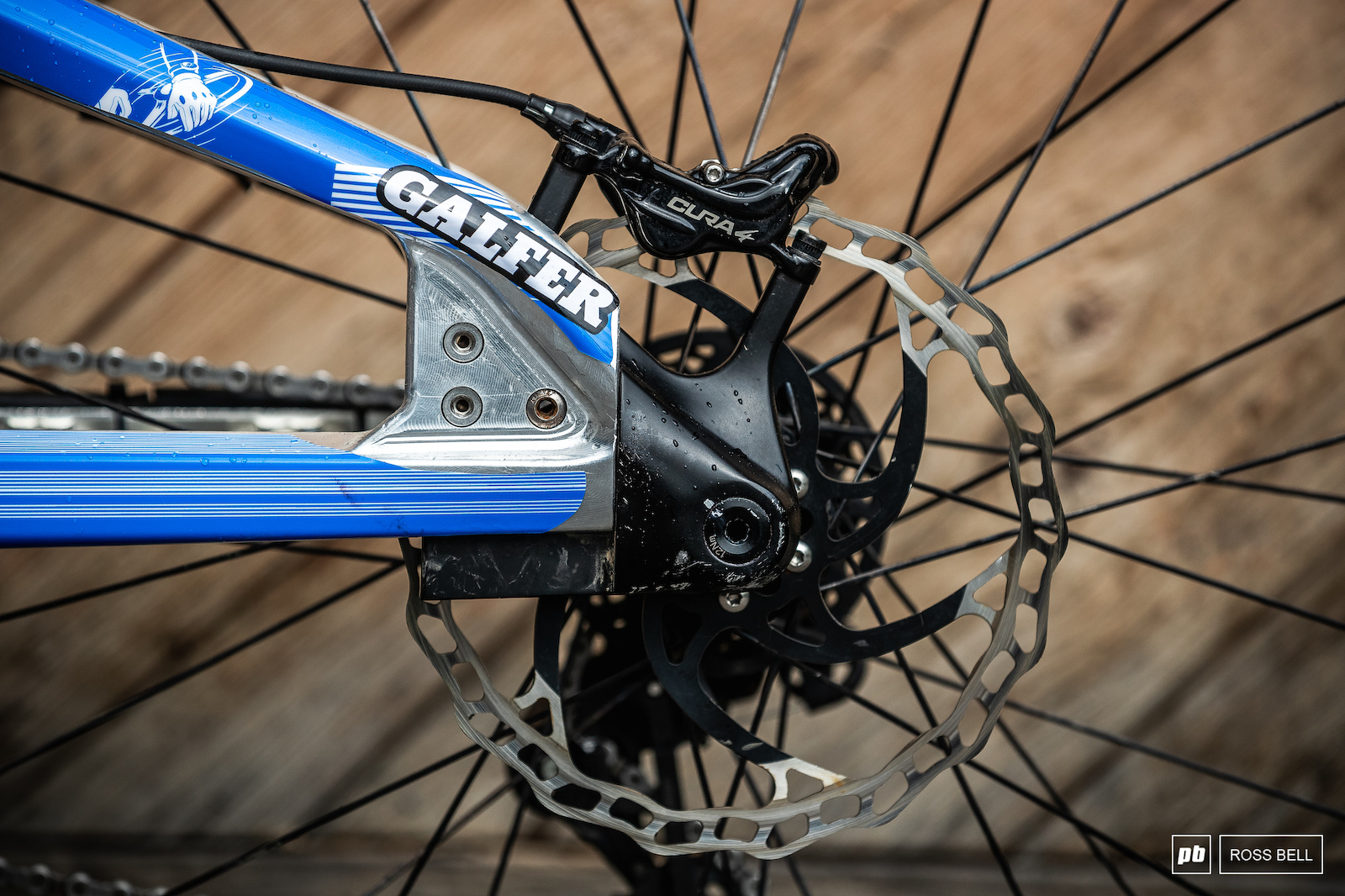 The adjustable dropouts allow for the option of a full 29" or a mixed wheel configuration. The axle is torqued and marked in position for a quick eyeball check. 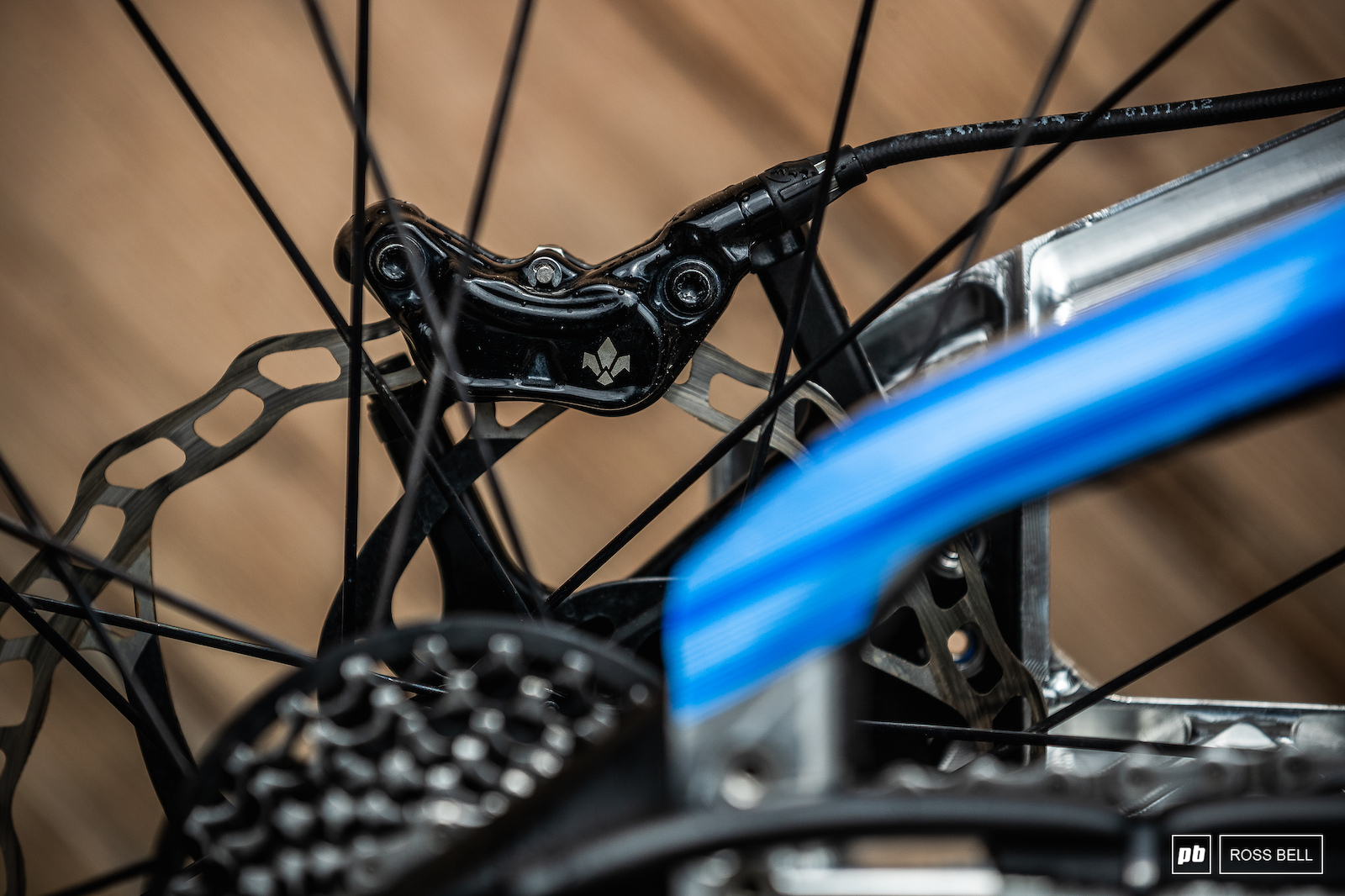 Formula Cura brakes add to an already unique build. Alex doesn't see the need for anything more than 203mm rotors at either end. 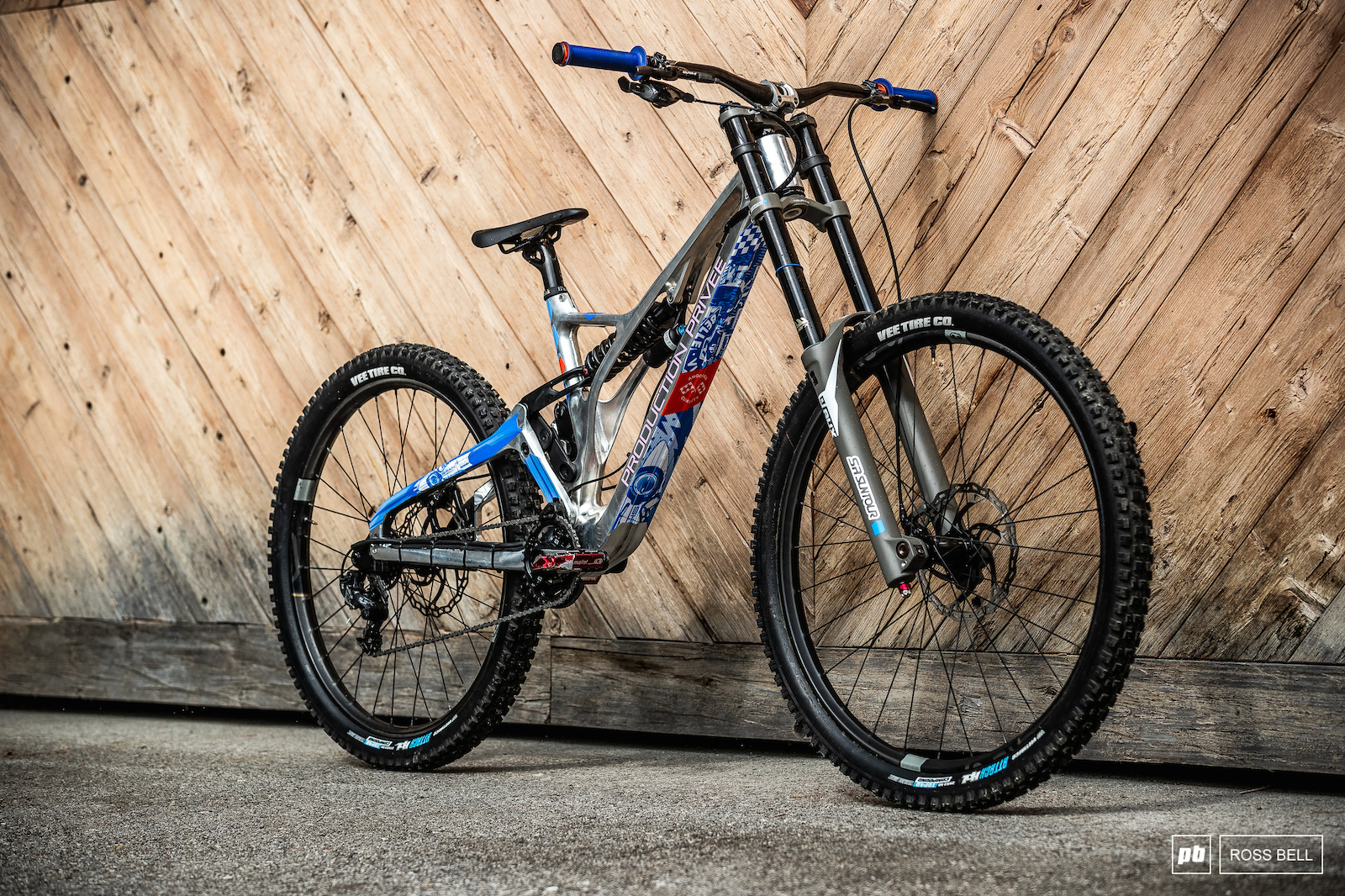 Another rider in the mullet gang. Vee Tire Co. Attack 2.5 tires are normally pumped to 1.4 bar (20 PSI) front / 1.6 bar (23 PSI) rear. Marin feels that inserts add a harsh feeling to the ride and wasn't afraid to admit he rarely gets punctures. 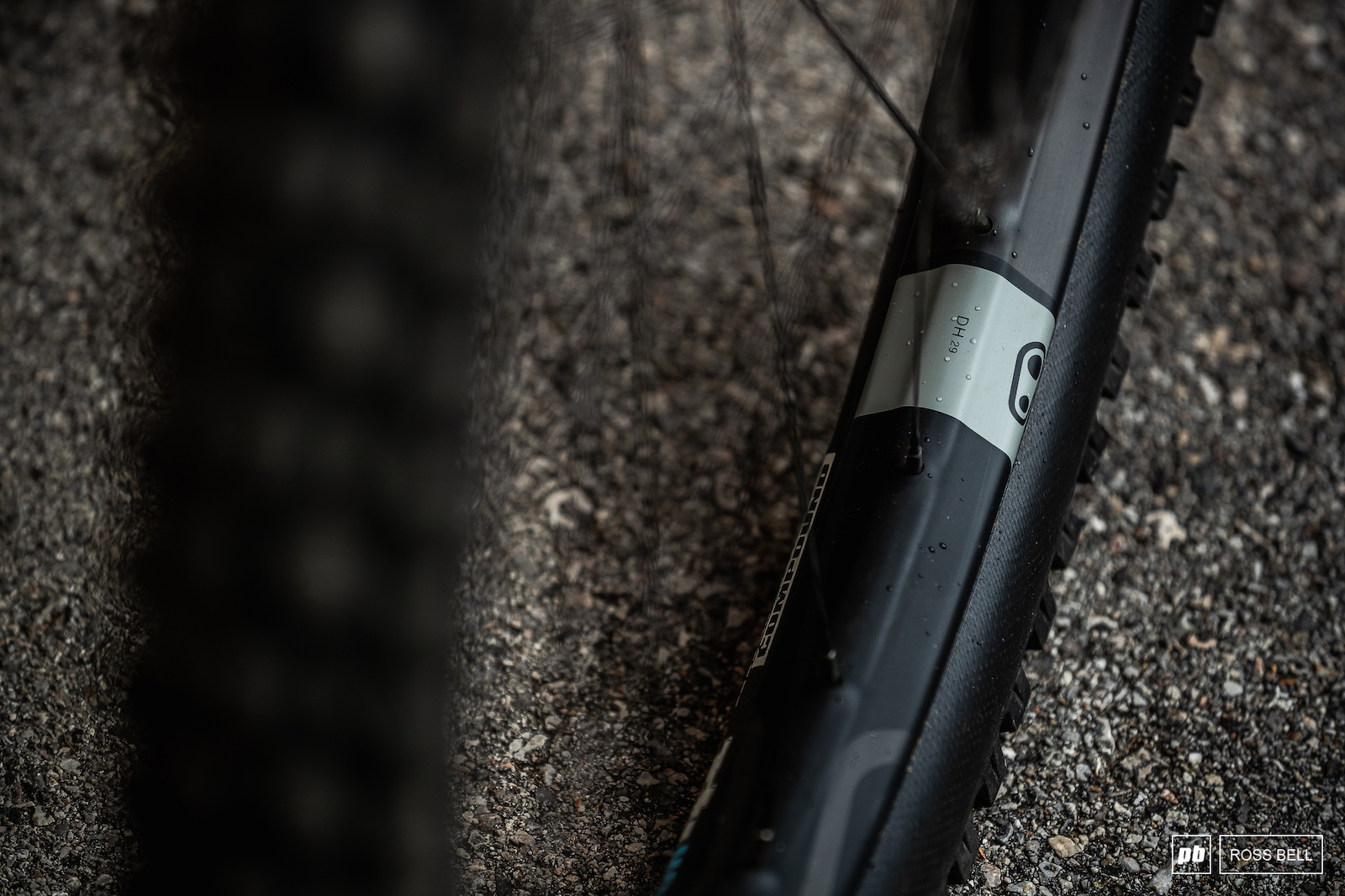 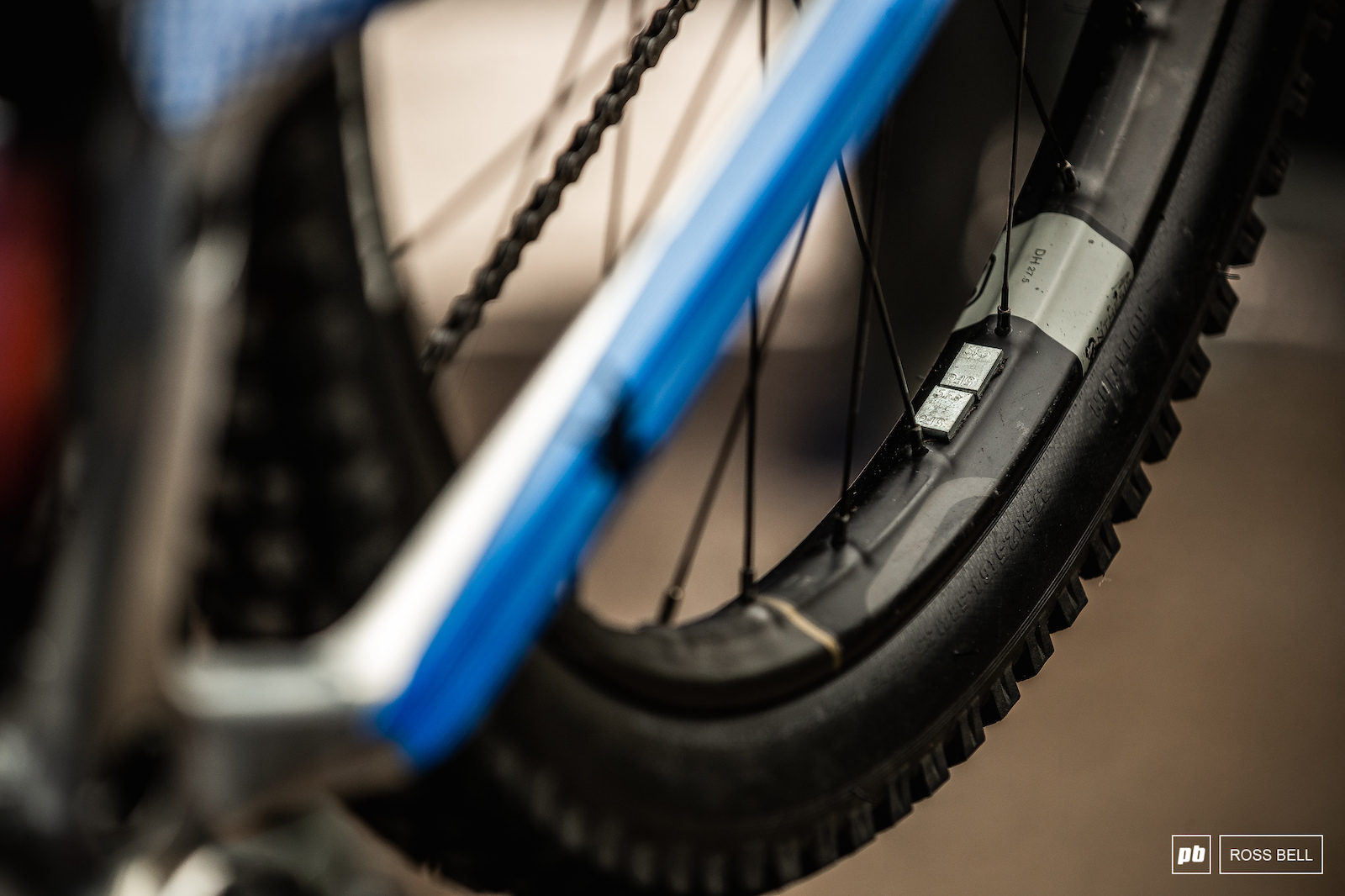 When you get to the speeds at this level of racing, you can't let anything distract you. Wheel weights are added for perfect balance. 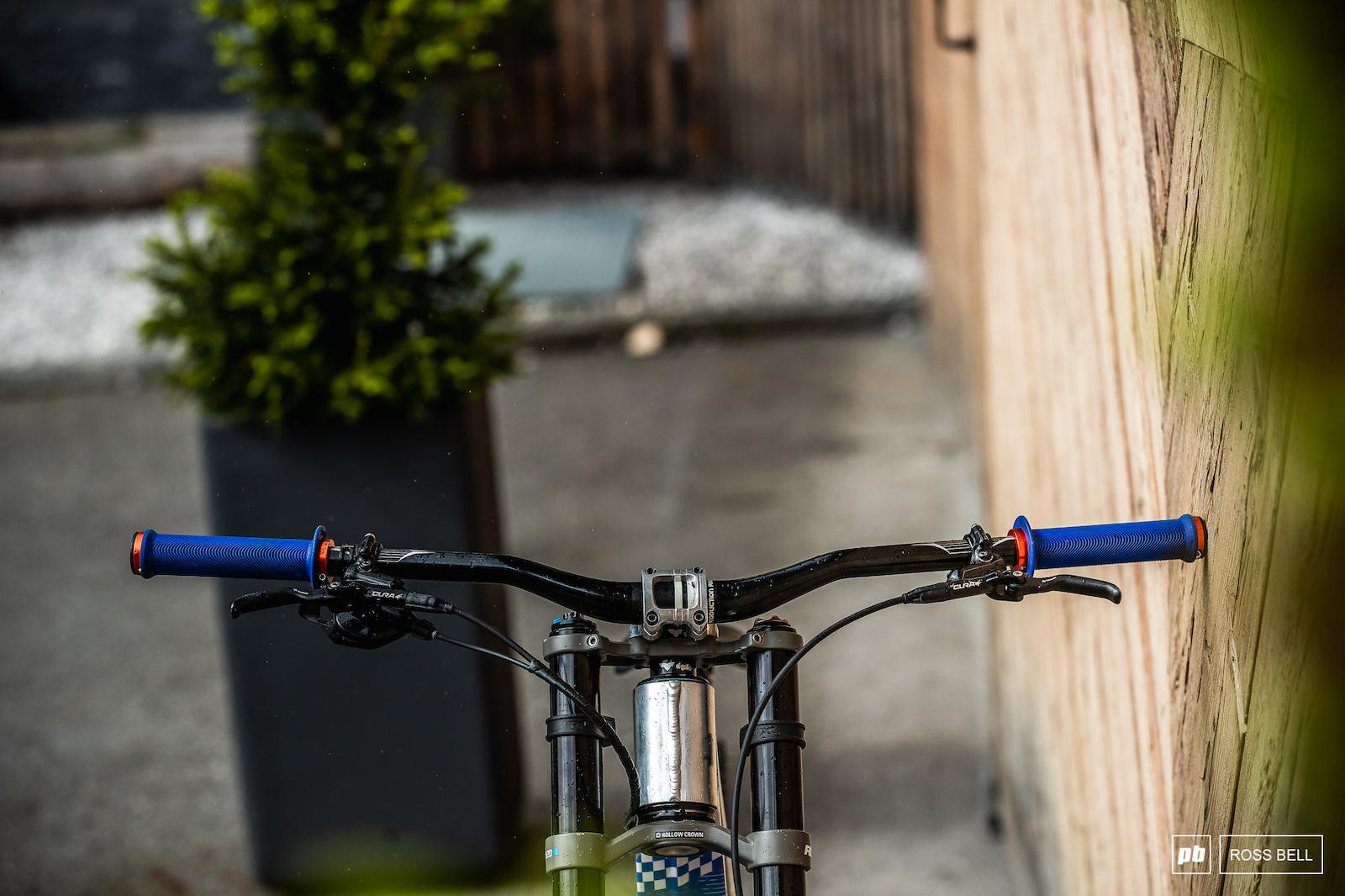 Straight down the pipe.

vinay (Jun 11, 2021 at 2:26)
I actually love those decals. Other brands have the "boring" box ticked already. Must have been pretty tough though, with the weld running across the center.

TannerValhouli (Jun 11, 2021 at 5:29)
@vinay: just because the “boring” box has been checked doesn’t justify checking the “hideous” box

rustyglaze5 (Jun 11, 2021 at 1:13)
Cannot have enough of these CNC'ed frame, i appreciate an alloy frame so much more than the soul-less carbon. Insane engineering here, gj

j-ron46 (Jun 11, 2021 at 3:25)
Really cool bike. The design and engineering gone into this is incredible, but is it not absolutely mental that a team with a 29" wheeled bike would partner with a suspension brand that only makes 27.5" forks?? All the design that goes into making these things fast and then the fork gets clogged up with mud. Bizarre.

vinay (Jun 11, 2021 at 11:15)
I wouldn't be surprised if Suntour releases a 29" specific fork this season. They've spent a couple of years on the WC DH circuit now, they've seen 29" arrive and it is not likely to step aside. I trust they're on it. That said, unlike Fox and RockShox, their fork arch seems quite low. It may it some mud but it will not hold as much as the big aforementioned OEM brand forks (even with 29" specific lowers). But of course, that's just me talking. Has anyone seen video's or pictures from training or qualifiers of these different forks to make a proper comparison?

Either way, best off probably are those on good ol' Dorados.

awilso27 (Jun 11, 2021 at 1:19)
I can't help but wince at imagining the yelp youd make if you caught yourself in the spring in a compression/ crash

justinfoil (Jun 11, 2021 at 8:01)
"You can see how much material has been removed from the inside of the frame walls around the seat mast."

But then they left those wings at the top of the rear triangle covering those pivots, that seems like a decent chunk of useless material.

retrobobi (Jun 11, 2021 at 3:45)
very nice bike that does not looks like the others it is a pity that Melanie brokes her shoulder again and cant run it at leagang and certainly the rest of the year

Afterschoolsports (Jun 11, 2021 at 6:15)
The urge to hijack the cnc machines at work is rising every time I see one of these sorts of frames. Actually machine time is no problem, but design time is.

DJTC (Jun 11, 2021 at 8:36)
After reading the flo payet article I dislike the coil being exposed so close to the gentleman’s fruit basket.

vinay (Jun 11, 2021 at 2:28)
More brands on Galfer pads now. Other brands will be running these pads with the Galfer logo sharpie'd out.

islandforlife (Jun 11, 2021 at 9:49)
That's the part I couldn't get over... maybe he's not measuring it correctly? Getting a proper sag measurement with a coil shock is already kinda tough, but with this frame probably even more so, add a big helping of stupid and you end up with 13%? He's gotta be, at the very least 20%, otherwise it would feel like a hardtail at slow to medium speeds and he would not have the small bump compliance he mentions. Or, they f*cked up the design and shouldn't have a coil on that frame? If you weigh 170 lbs and have to be on a 550 lb spring with 13% sag... you need to switch to an air shock jammed to the tits with spacers... or redesign the linkage.

I think the Production Privee bike is 200mm travel/3” stroke, in which case a 550 pound spring on a 170 pound rider would yield somewhere in the ballpark of 13% sag. Seems like plausible math, which leads me to the question “why?” Seems like it’d be driving your fork into the earth on rough or steep tracks. I’ve heard of people in the pro class running 18% sag, but I’ve never heard of anyone running less than 18. Nuts.

DoubleCrownAddict (Jun 11, 2021 at 5:26)
Sweet looking bike and gorgeous stem... but even more dangerous than a regular derailleur bike!

"Also, what would happen if the chain were to jam when riding something technical? The rear wheel would stop turning and could even cause a crash. Even if the narrow wide chainring and chain guide do their job's perfectly, something as simple as tagging the rear mech on a rock and bending the mech hanger could cause a crash."

DoubleCrownAddict (Jun 13, 2021 at 11:49)
@freeridejerk888: I guess that's the response you resort to when you're frustrated with the truth and have no comeback.

eldsvada (Jun 11, 2021 at 1:50)
It's not complicated at all? It's a simple single pivot with two links driving the shock. Similar to first gen Kona Process, Cotic FS, Polygon sisqu et.c but with shorter links.

FuzzyL (Jun 11, 2021 at 3:05)
@eldsvada: Still it makes me wonder, how much the performance would have been compromised if the had done without one of the links - and if it would have been noticeable for the rider at all.

MikeGruhler (Jun 11, 2021 at 4:05)
@FuzzyL: Not sure on this one but the links on a single pivot normally helps drive the shock at a better angle and/or change the rate of the suspension. It appears this bike has 3 links driven by the swing arm. The swing arm can be considered a link in the system as well.

scratchbum (Jun 11, 2021 at 4:29)
...and yeti rail! Looks likethe lovechild of a demo and an Orbea Rallon with that linkage - might be great but doesn't look too appealing

eldsvada (Jun 11, 2021 at 7:42)
@FuzzyL: you need at least two links, one that attaches to the swing and that connects to the frame, the shock can then be connected to any of those two depending on what to of leverage curve your looking to achieve.

The only other option would be to drive the shock directly from the swing, that would definitely be noticeable since it will be hard not to end up with a pretty flat leverage curve.

FuzzyL (Jun 11, 2021 at 7:58)
@eldsvada: I’m aware that moving the pivot in order to still engage the shock in a linear way will change the leverage. But with them running an incredibly hard spring at the moment, I’m not sure they have achieved the perfect leverage anyway… but of course it’s hard to tell without actually seeing a curve.