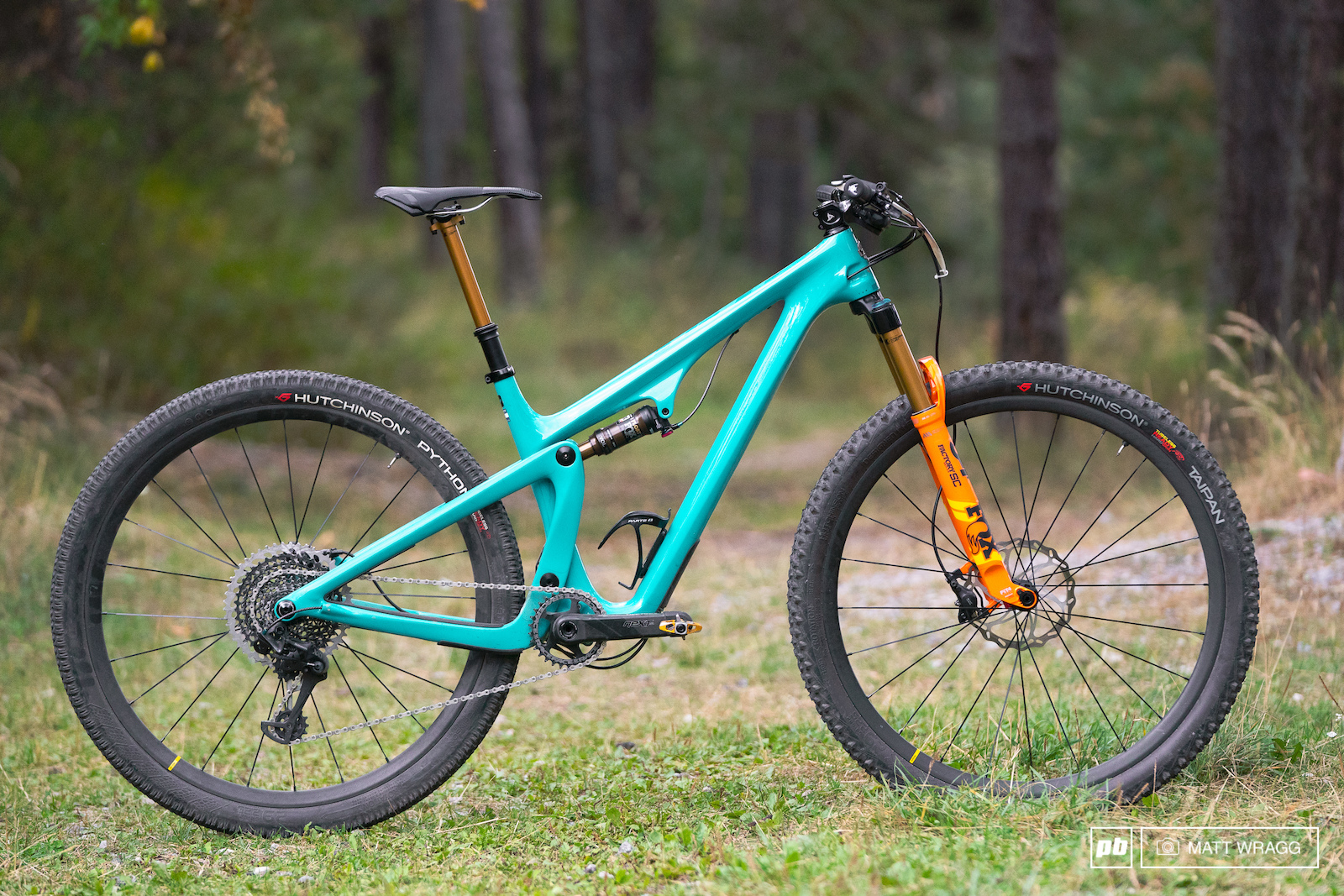 Alexis Chenevier's
Yeti SB100
Bike Check
Alexis Chenevier might just be the most impressive all-round mountain biker you have never heard of. A former XC racer turned technical endurance specialist, he is dominant on the niche French scene made up of a string of particularly tough races like the Trans Vesubienne and the Epic Enduro that push both your fitness and your bike handling to the limits - he won the Trans Vesubienne six consecutive times, only to be dethroned by Emeric Turcat in 2019 and 2020, having to settle for second both years.

In a recent interview, he admitted that he would love to try the BC Bike Race, but doesn't have the support to race internationally. That's the other thing that makes him so impressive - there is no money chasing these races, no media coverage, no parade down the Champs Elysee. He does it simply because he loves it. Over the last few years, he has smashed more than a few full-time athletes, all the while holding down a job as a wheel engineer at Mavic, or at least he was until recently as he has fallen casualty to the turbulent times at the legendary French brand a month ago and is currently looking for a new job. We caught up with him just before he took on the Trans Vesubienne to see how he sets up his race bike for this kind of challenge as it certainly isn't your standard XC race bike. 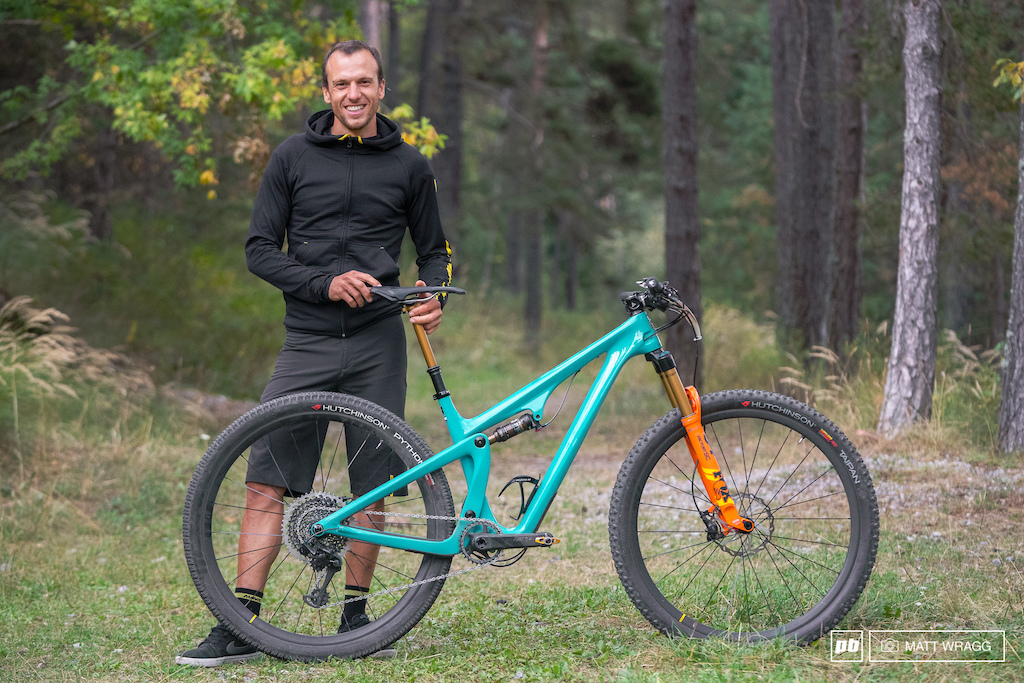 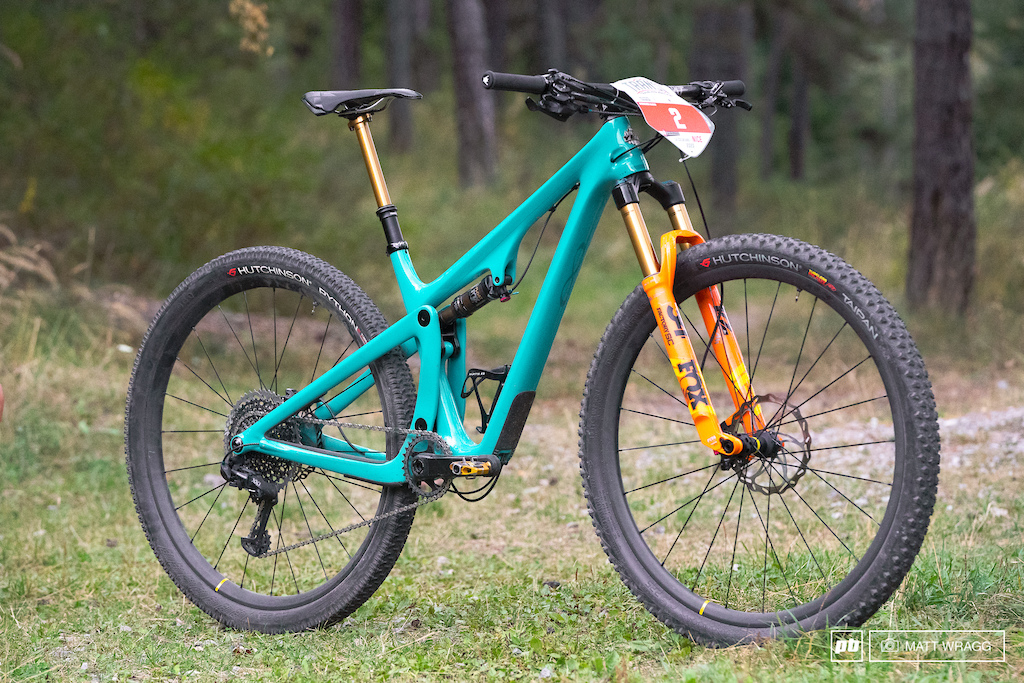 At 1.73m tall, Alexis opted for the medium frame. 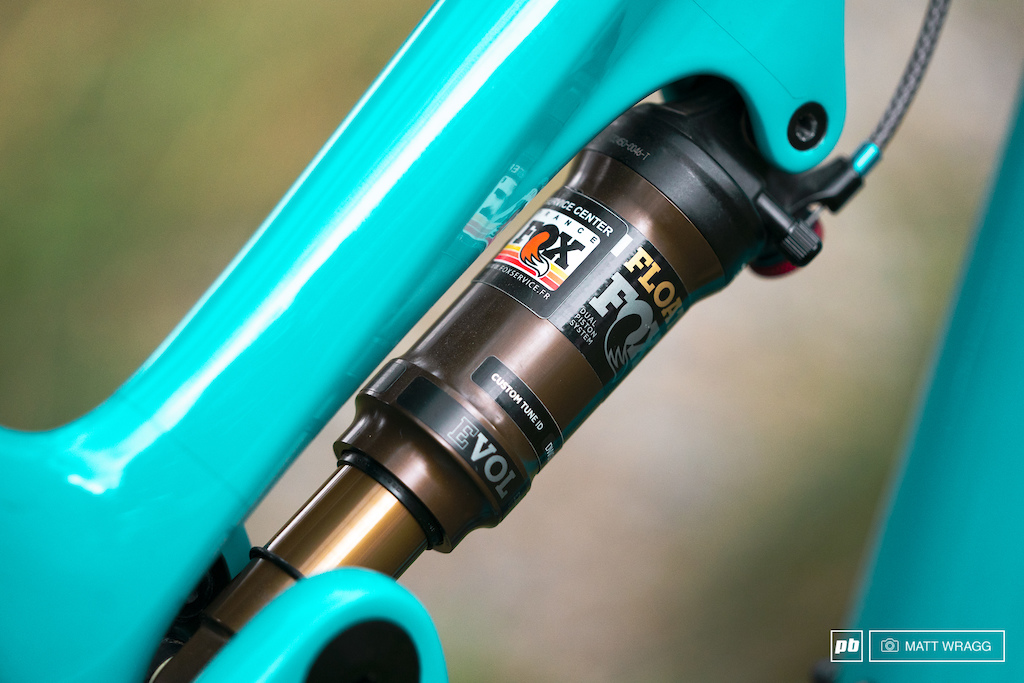 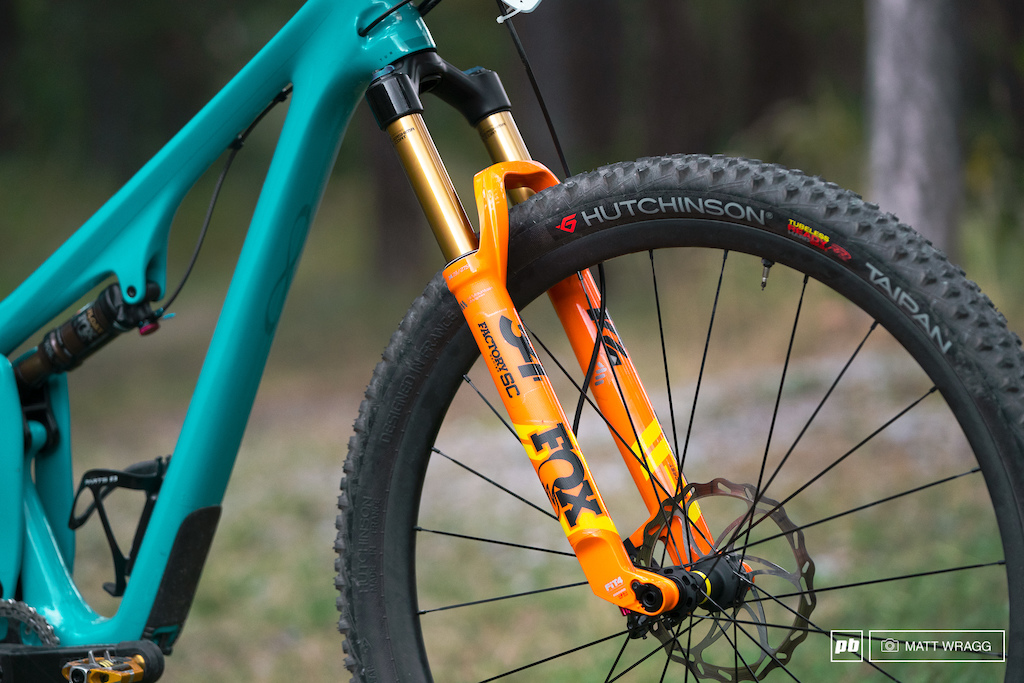 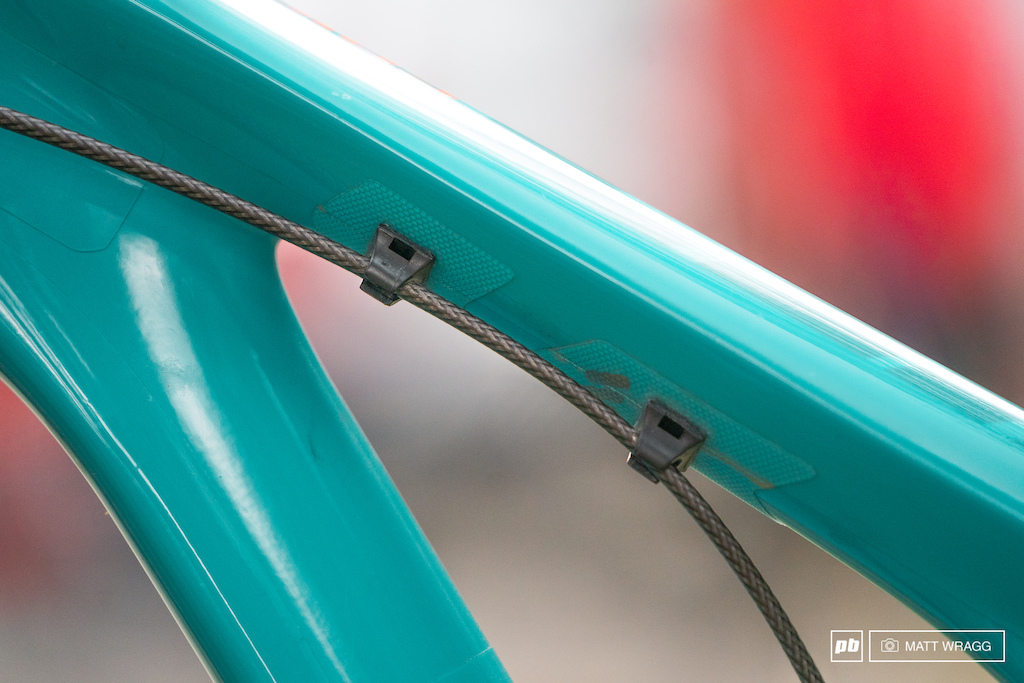 As standard the Yeti SB100 does not come with cable guides for a lockout. In a race where seconds are precious and there are some road climbs mixed in, he likes to run one, so working with the team at Fox France (Tribe Sport Group, who also supply his frame, Raceface components and Brake Authority pads and discs) they came up with this solution. 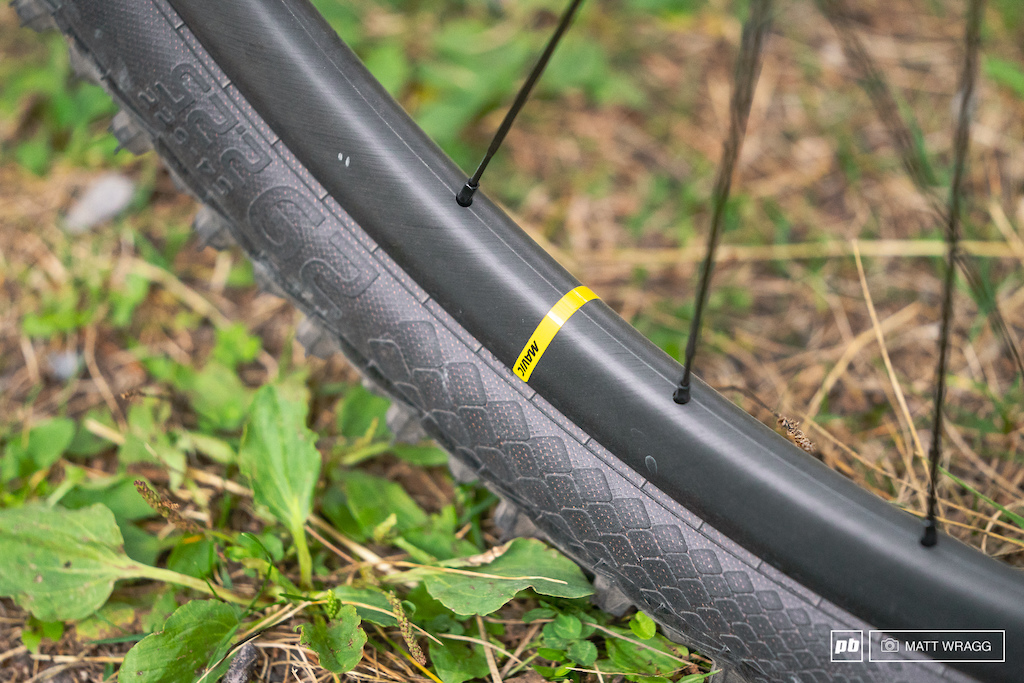 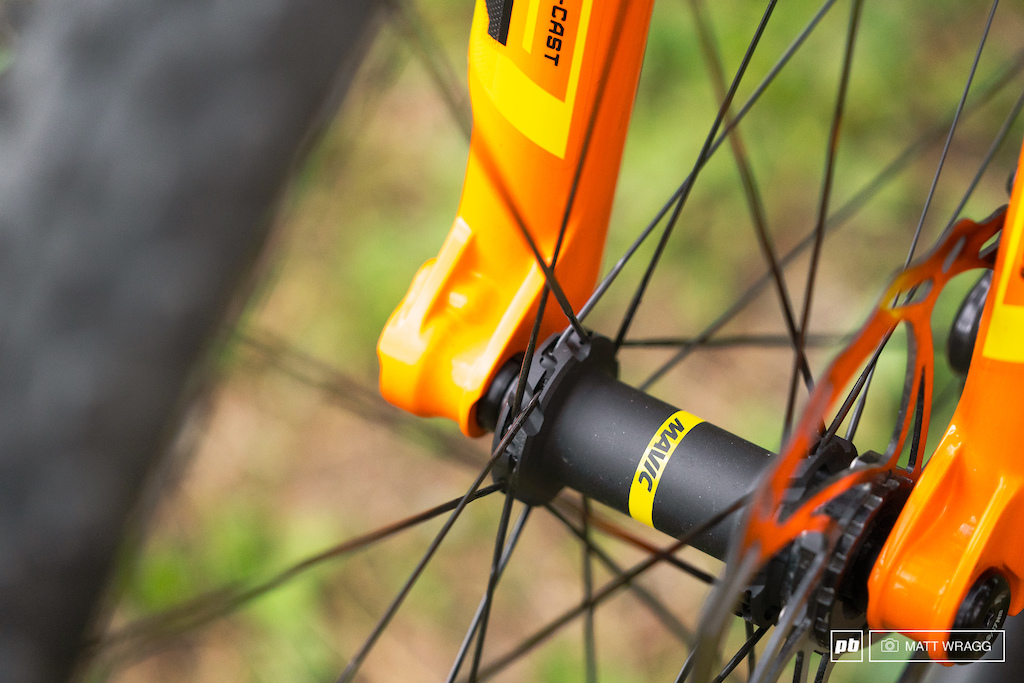 Mavic were not just his employer, but also his sponsor - he is running a pre-production set of carbon Crossmax SLR wheels with a 25mm internal width rim. 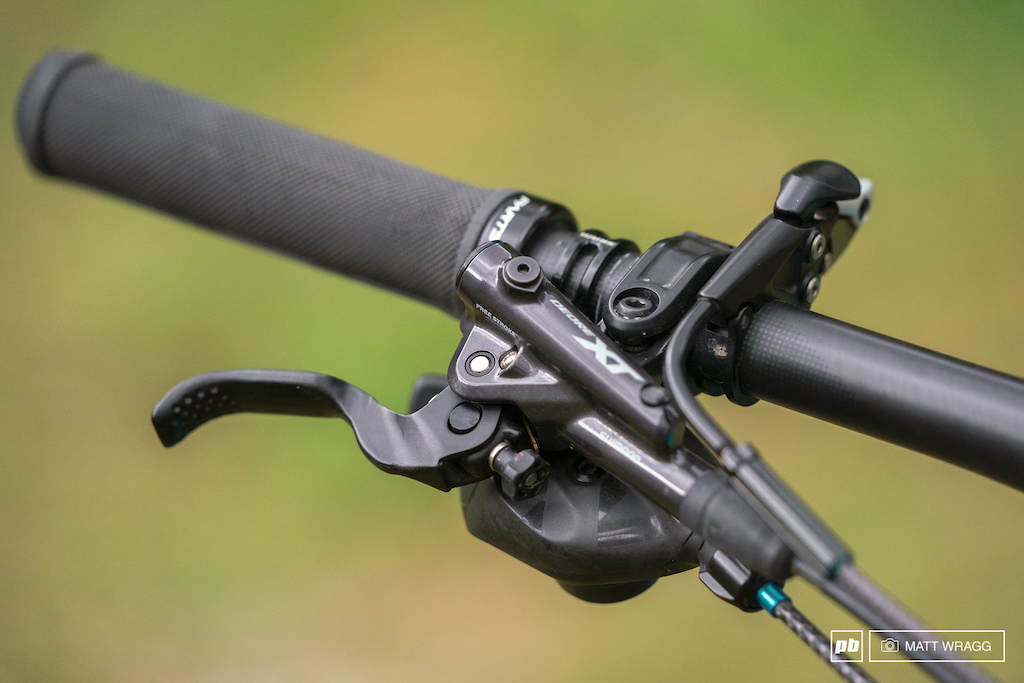 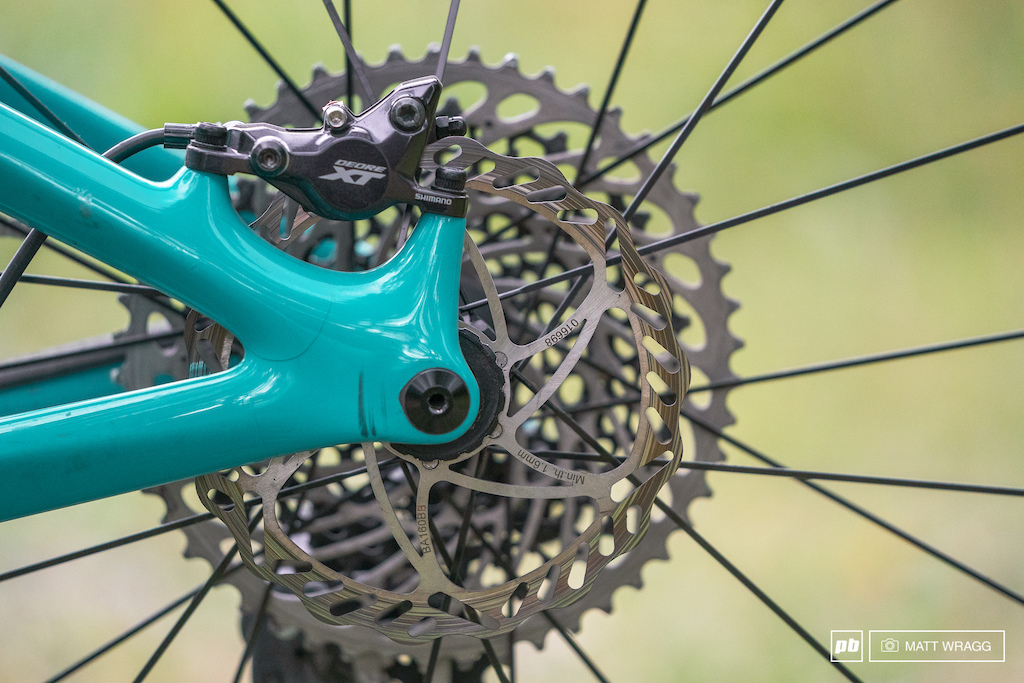 With no sponsor for his drivetrain and brakes he runs workhorse Shimano XTs, but with Brake Authority pads and discs (180mm front, 160mm rear). 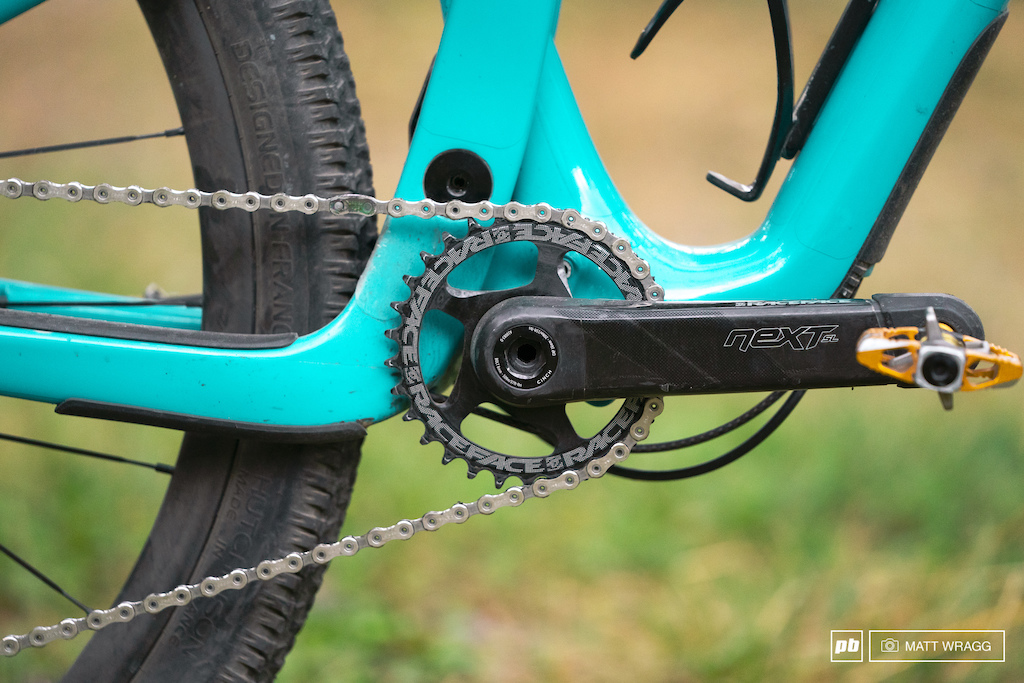 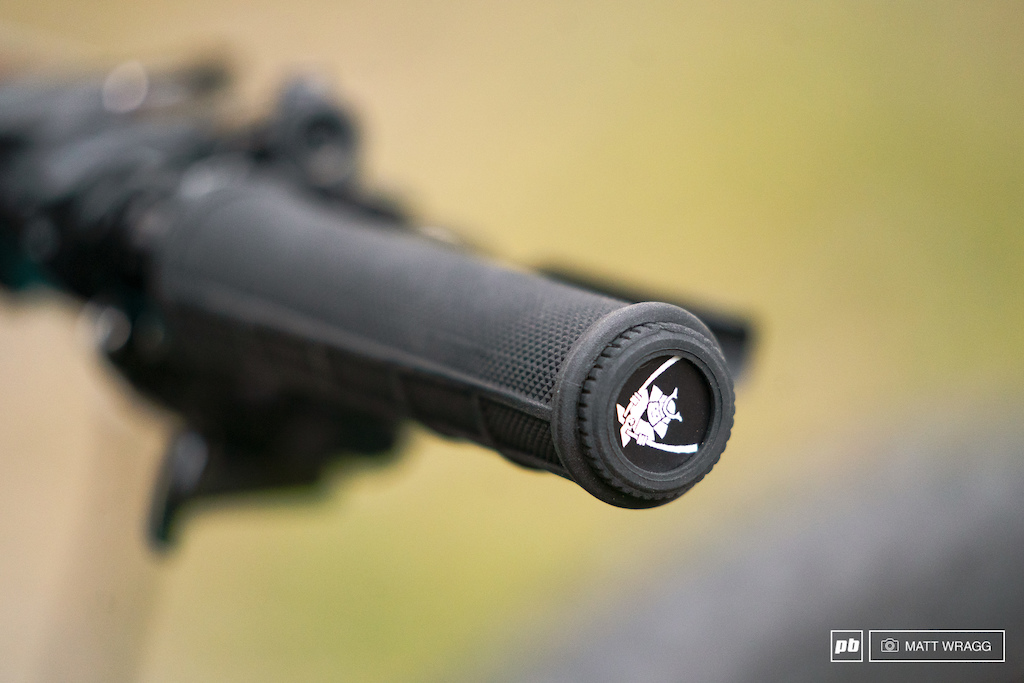 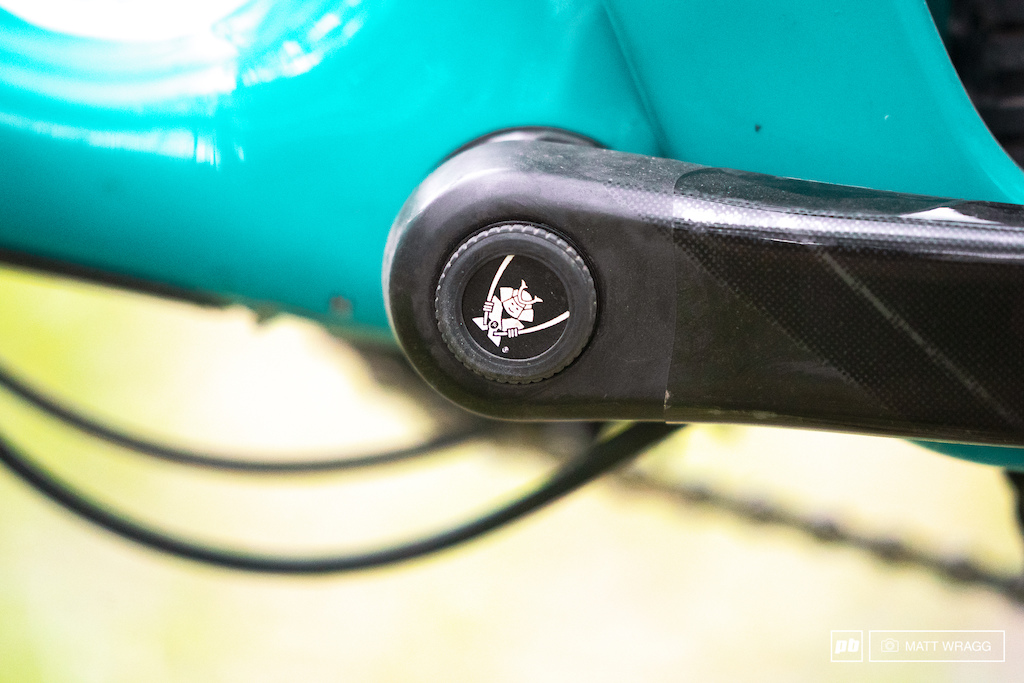 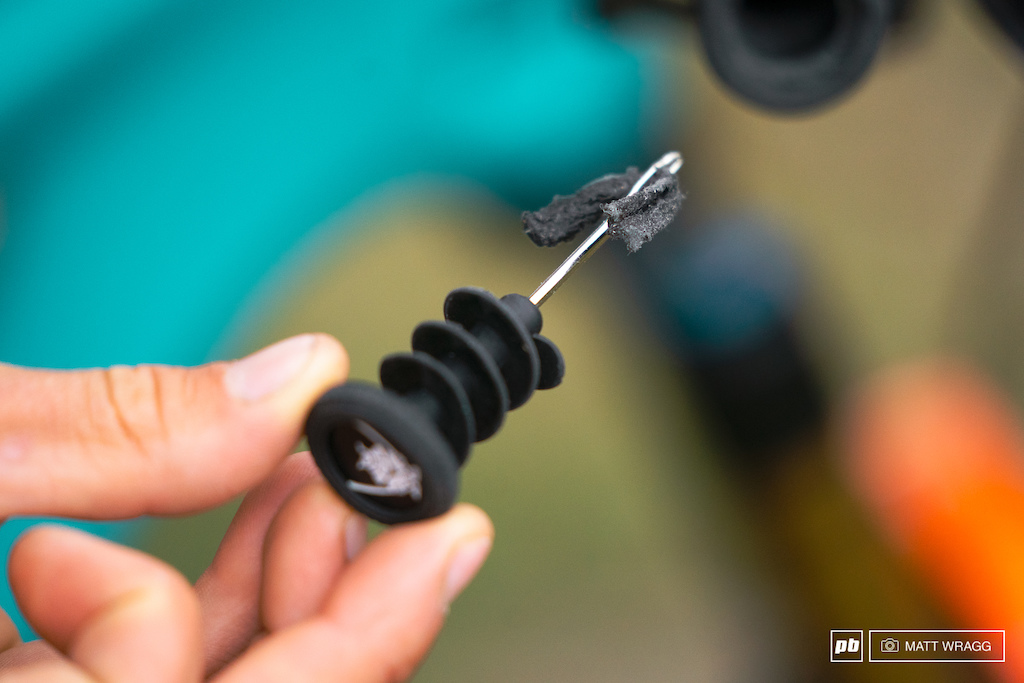 The one part of his drivetrain he is supported for is the crank - a Raceface Next SL to keep the weight down. For this race, he ran a 30t chainring paired to a standard 10-50t Eagle XX1 cassette at the back. The non-driveside of the crank and both bar ends are stuffed with tyre plugs as lightweight tyres on these trails have a nasty habit of picking up punctures, which have decided the race on more than one occasion. 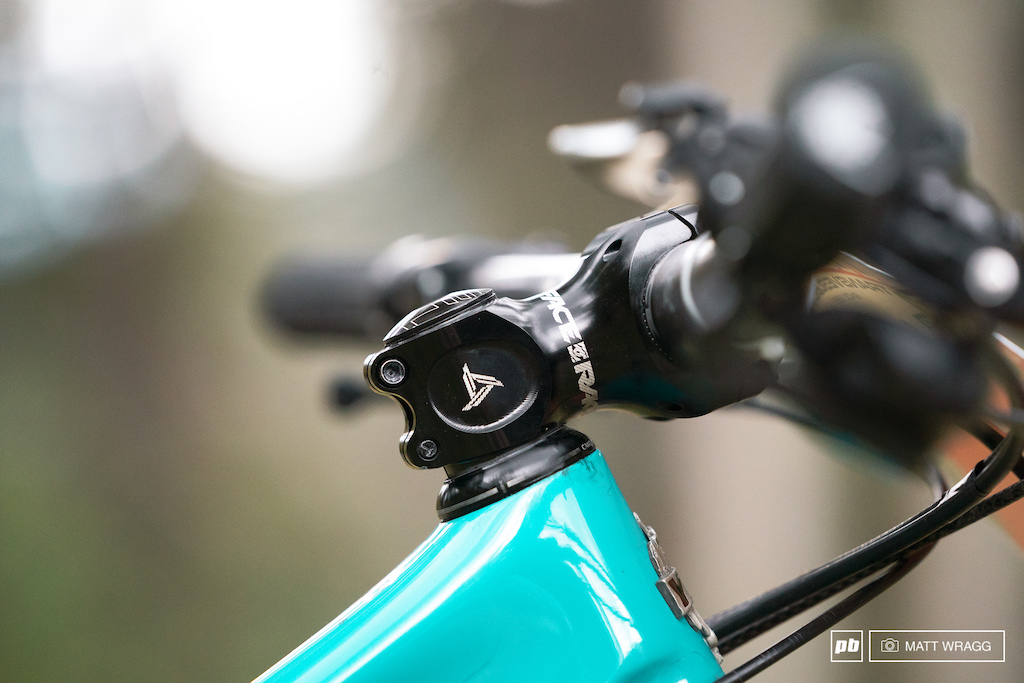 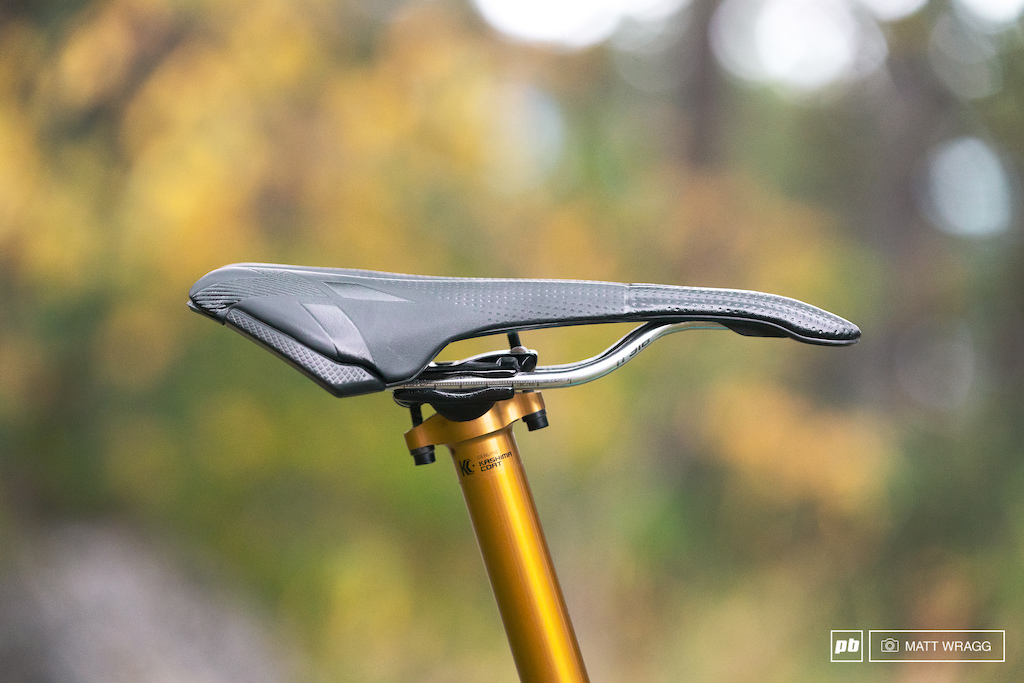 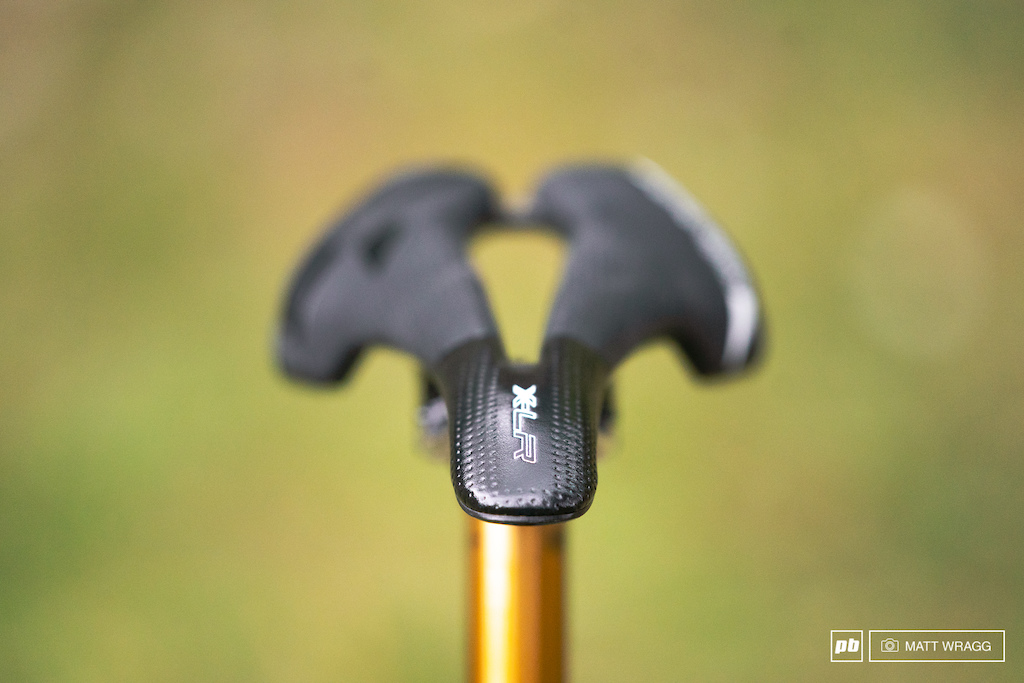 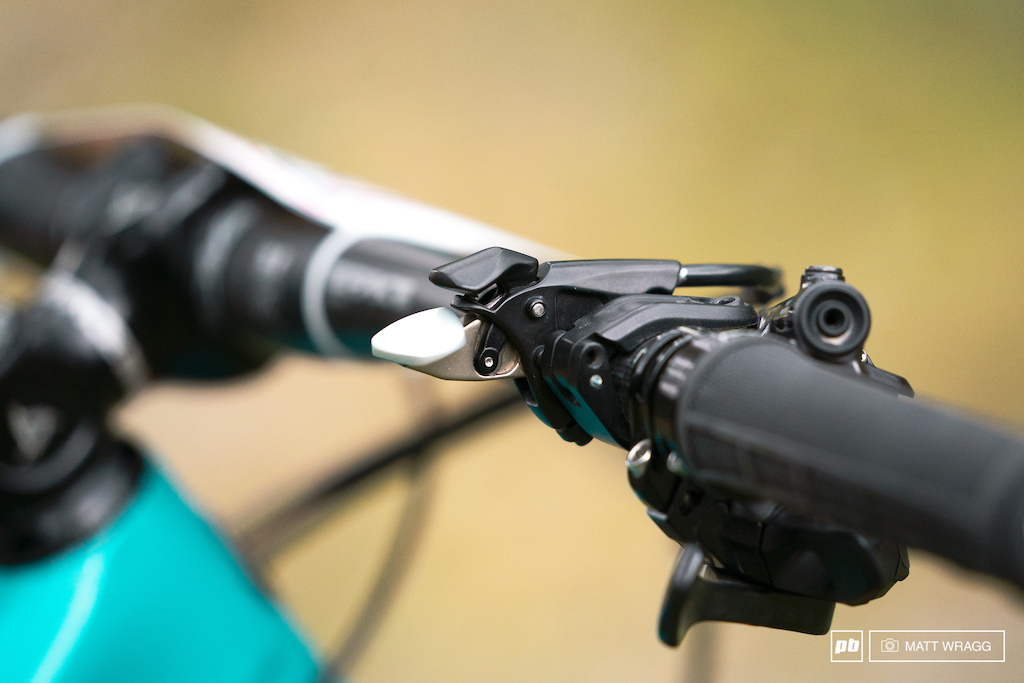 He runs a Raceface cockpit, with a low-rise Next SL bar, trimmed down to 750mm and a 60mm stem - not your standard XC racing setup, even if the stem is flipped to keep the stack height down. While he doesn't measure each element of the cockpit he is very particular about their position and it usually takes him a few rides with a new bike to get them in just the right position. The saddle is a minimal Selle Italia X-LR, perched atop a 150mm drop Fox Transfer post. In a somewhat unusual move, he runs the shock remote on the right-hand side of his bars. 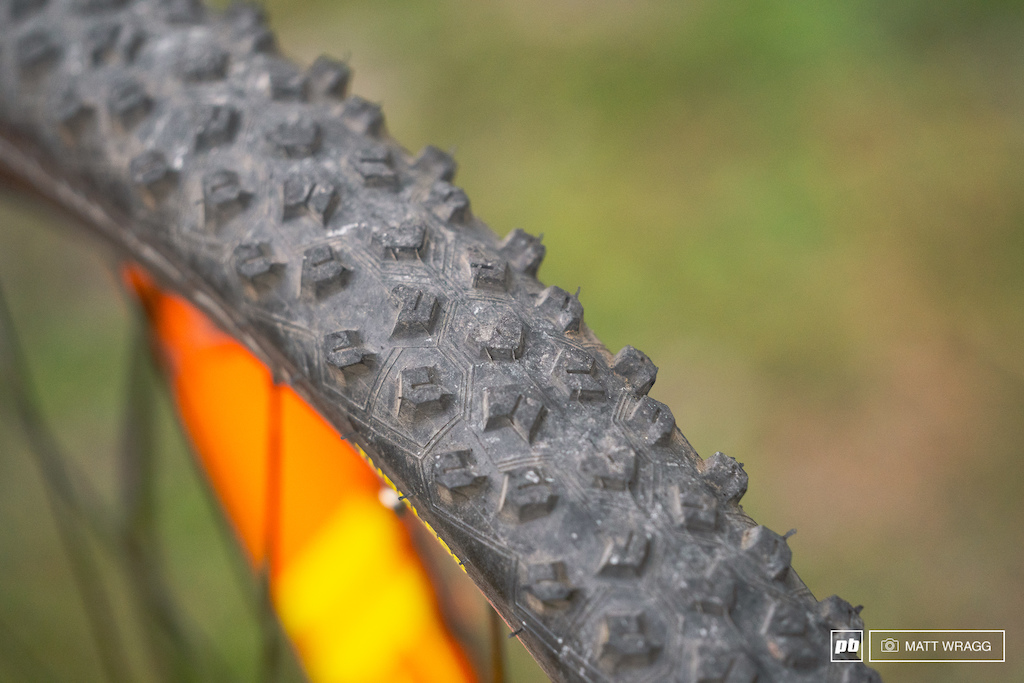 Up front he runs a Hutchinson Taipan in 2.25. 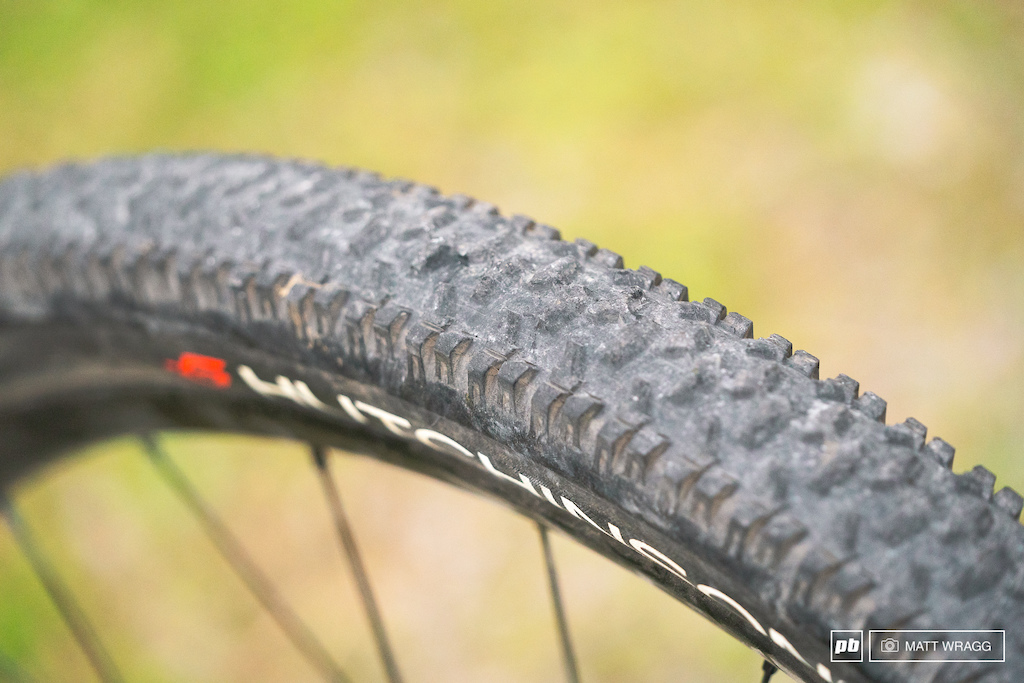 Out back is a pre-production Python in 2.25, but with a double ply casing for added security - he notes that it weighs more than a kilo, something that would be unheard of on a pure XC bike. Inside there is nothing special, no race sealant or inserts. 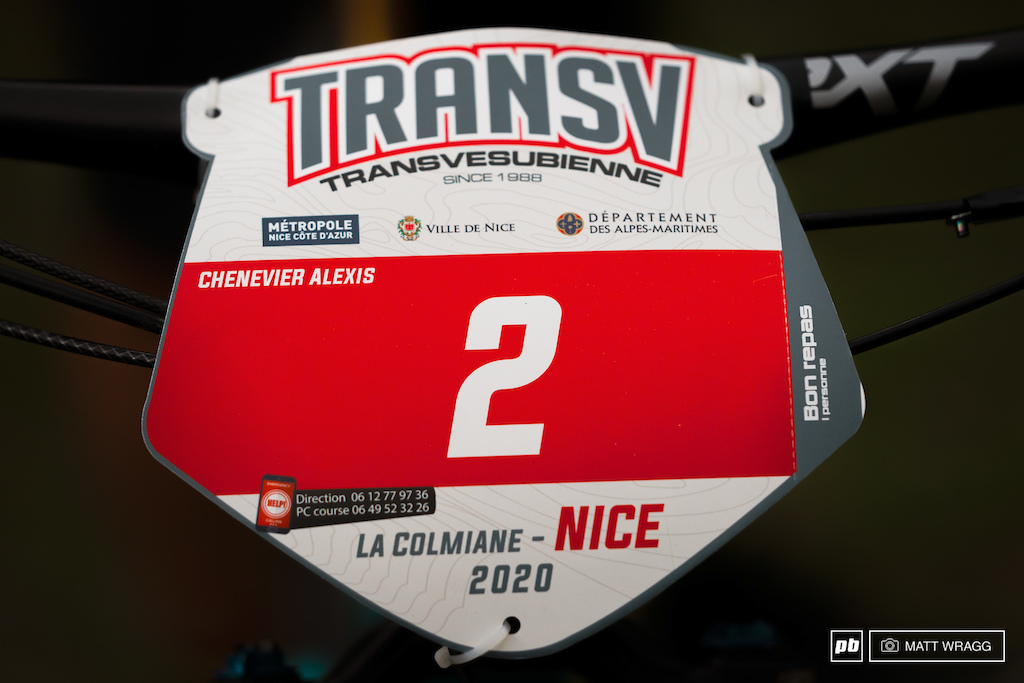 It was not to be for Alexis, 2018 French marathon champion, Emeric Turcat, was stronger than him on the longest climb of the day and he will have to do another year with the number two plate.

NoahColorado (Sep 22, 2020 at 7:03)
I really hope this type of racing expands globally, it sounds EXACTLY like my ideal format.

plume (Sep 22, 2020 at 8:09)
I think racing like this has existed for quite some time. While I can't speak to the terrain in this race it sounds to me like it's how a lot of us set up our bikes to race the endurance races in Pisgah, NC. You need crazy fitness and skills to excel, or survive, really suits the best all arounders, aka mountain bikers.

I'm sure BC bike race is very similar as well.

mattwragg Plus (Sep 22, 2020 at 8:20)
@plume: I honestly don't think you could have a race quite like this in the US with your land access issues, we have very little dedicated trail but endless, wild multi-use trails in the backcountry - it's hard to explain the difference in less than an essay if you've never ridden over here. I have ridden some stuff in the Sierras that is comparable, but then the racing there is on the Downieville course, which feels like a smooth highway compared to almost everything in this area of France.

Check out the Singletrack6 stage race held in the Kootenay region of BC (~500kms east of the coast). I live there, have ridden most of the trails it uses, and have done BCBR once. I can confirm the ST6 courses would put a smile, and grimace, on your face.

That said, I'd love to see more single-day XC endurance races,100km to 100 miles.

RadBartTaylor (Sep 22, 2020 at 9:41)
I think they could piggy back off the enduro courses / races and just time the whole thing, transfer sections included...maybe make it two laps for the shorter races. The EWS courses would need climbs in place of lifts, should be doable. Trans "xxxx" race Sat morn, after folks leave, open up course for enduro pre-ride, enduro race Sun....

phalley (Sep 22, 2020 at 10:20)
@mattwragg: Come to Pisgah. It makes many Sierra trails look like dirt sidewalks, Downieville DH included. The Pisgah Stage Race is no joke. Guys are sending features on xc rigs that 95% of riders walk down

plume (Sep 22, 2020 at 10:22)
@mattwragg: The east coast riding in the US is a departure from your experience in the Sierras. Western NC, Eastern TN, VT, NY, VA - all contain large swaths of public access back country single track, regarded with most riders as, old school technical. Pisgah is where I have the most experience racing, there is very little in the way of machine built or flow trail. Most of the trails here are old hiking trails, multi-use. Racing is any where from 30, to 80+ miles with 3,000 ft, to 10,000 ft of climbing with descending on mostly steep, rocky, and technical terrain.

I've ridden in San Raphael once. It was a blast but I'd never think that experience is all France had to offer. I'm quite sure this event has it's own very special character. Check out the Pisgah Stage race if you're interested. It's good that we both seem to take pride in the regions we ride in. Luckily the US (east coast) has gotten a few things right, and public access to proper mountain biking is in no shortage in the region I reside. Cheers!

NoahColorado (Sep 22, 2020 at 10:59)
@dlford: ST6 is on my bucket-list, maybe even next year! Gotta decide between that and the Quebec Singletrack Experience, which I'd planned on doing this year.

Definitely need to get to Pisgah too!

To clarify, what I'd like to see is a proliferation of more very technical XC races and also non-single-discipline-conforming races (Downieville, Golden Giddy-up, etc.). The Holy Grail being something where technical skill and fitness are equally advantageous, but you can't simply have just one and be competitive. Didn't want to go there -- but essentially Downcountry Racing™.

I've done Moab Rocks three times, which is pretty close to ideal. Day one is Porcupine Rim (from town) and the long, slow burn of climbing up Sand Flats Rd is quickly erased by the insane joy of blasting down slabby chunk and passing people left, right, and center.

whattheheel Plus (Sep 22, 2020 at 13:25)
@NoahColorado: Come up here and do the Dakota Five-O next Labor day!! 50 miles of pretty much all singletrack!! Grab that wuss @simcik and head on up here!! Stop at one of those "cool" stores you have down there before you do tho!!

BenTheSwabian (Sep 22, 2020 at 12:35)
@jwdenver: It's honestly not even funny how many used Yeti bikes are for sale that say they recently had their front- or rear triangle replaced under warranty. Seems to be a regularly occuring issue.

fautquecaswing (Sep 22, 2020 at 12:24)
@aljoburr: Alexis is famous for real in the mtb community in France. I have seen him once in a race starting with a steep uphill, I could not imagine you could start that fast with a mtb, really incredible.

BTW this race format was really interesting, it is called the "all mountain challenge". In 2 days you have both a pure enduro and a xc race (a pursuit based on your enduro time) you have to do with the same bike. Lots of different kind of bikes and athlete profiles.

Are those the widest rims Mavic has ever made? When did hell freeze over?!!

kcy4130 (Sep 22, 2020 at 7:06)
The nose of the XLR reminds me of the hood of the Mercedes SLR. Thanks for this article, I enjoy seeing types of mountain biking and races that I know little about.

combfilter (Sep 22, 2020 at 8:08)
It's impossible to use the bottle cage without locking out the rear suspension on this bike. No matter how long I thought i'd get used to it, I could never manage to not do it. The nozzle of the water bottle hits it every time. Tried even with a side loader cage.

laksboy (Sep 22, 2020 at 17:17)
Or a double bottle mount shifted upwards using a Wolftooth B-RAD. I get what you mean though, I still constantly have to verify that he shock is open and not partway switched to Trail, which puts it in 100%Trail mode. This mod also leaves room for a toolpack strapped on down low (also Wolftooth).

Isn't that the lock-out remote on the right, not a dropper remote?

I would say only the brakes, drivetrain is not Shimano and not even a workhorse.

SergeC (Sep 22, 2020 at 7:53)
I run similar sag on my Rocky Mountain Element shock and fork which has same travel (100 and 120). I found that gives me the best compromise with traction and control on rugged trails. And those bikes are designed to pedal well, so there's no problem going with the extra sag.

equivalent would be minion ss dd and dissector?

jzPV (Sep 22, 2020 at 7:15)
they look nothing alike... more like Ignitor and Ardent Race. The blue Epic from that RS employee a couple weeks back had a Dissector and Rekon combo, which is what I'd go for with that bike

Foxy87 (Sep 22, 2020 at 7:21)
The front looks more like a forekaster. And a semislick out back would probably generate not enough grip on the climbs

fautquecaswing (Sep 22, 2020 at 12:32)
The Hutchinson Taipan can be compared with a ignitor or a ardent. To me, a good mid season back tire. Always surprised to see it front, but several top bikers use it front for this kind of race. You need skills I do not have to manage such a tire up front! The hutchinson python is a regular xc back tire comparable to the crossmark.

...almost: his Python is a double casing variant with 1kg.

fautquecaswing (Sep 22, 2020 at 22:13)
@FloImSchnee: yep I meant regarding the cleats. Small cleats, limited traction, low rolling resistance.
To me the transV is tough terrain where I use Toro, I need grip, I do not care about rolling resistance... For him, double casing is enough.