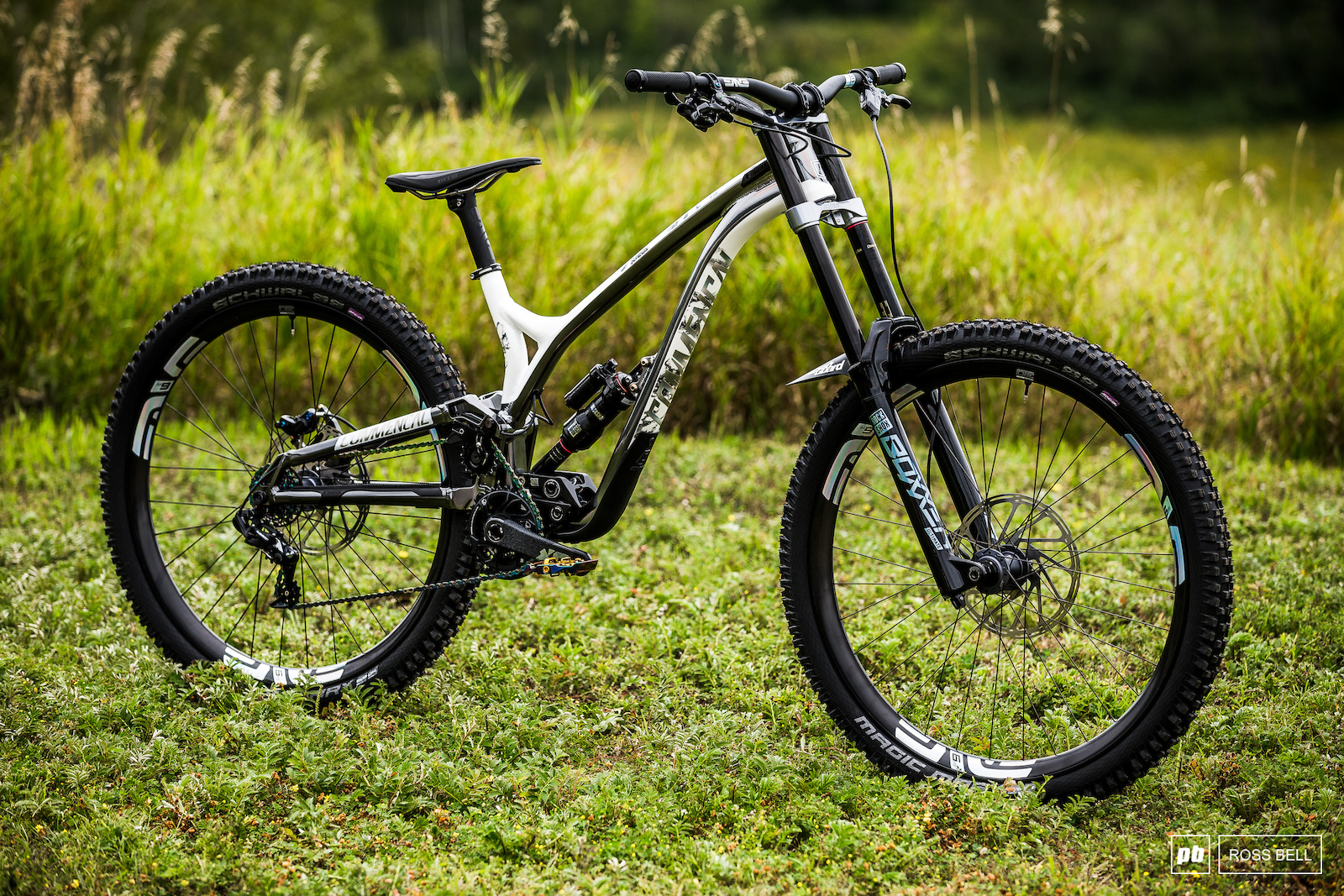 BIKE CHECK
Amaury Pierron's
Commencal Supreme 29
Photography by Ross Bell
2018 was a stand out year for Frenchman Amaury Pierron. Taking the overall World Cup title and riding consistently at the top of his game, there was little debate that he was a contender for the title of World Champion, however, after a long season on top coupled with some sickness, the rainbow stripes evaded him.

This year, a similar stage is set. Pierron has once again been consistently riding at the top and the French have taken six of the last seven WC wins. With three wins and not a single finish outside the top-10 this season himself, he's sitting in second place for the WC overall with just two races left... this weekend's World Championships and then finals.

After missing the coveted jersey last year, there's no doubt that Pierron is hungry for the win this weekend and he is no doubt a favorite to take the top step. 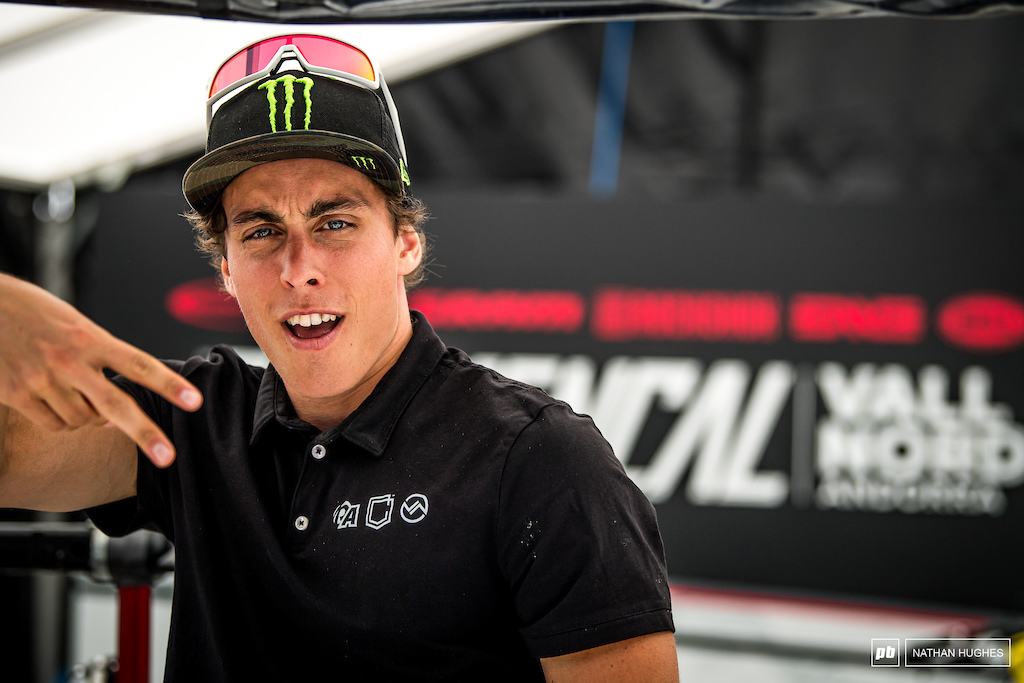 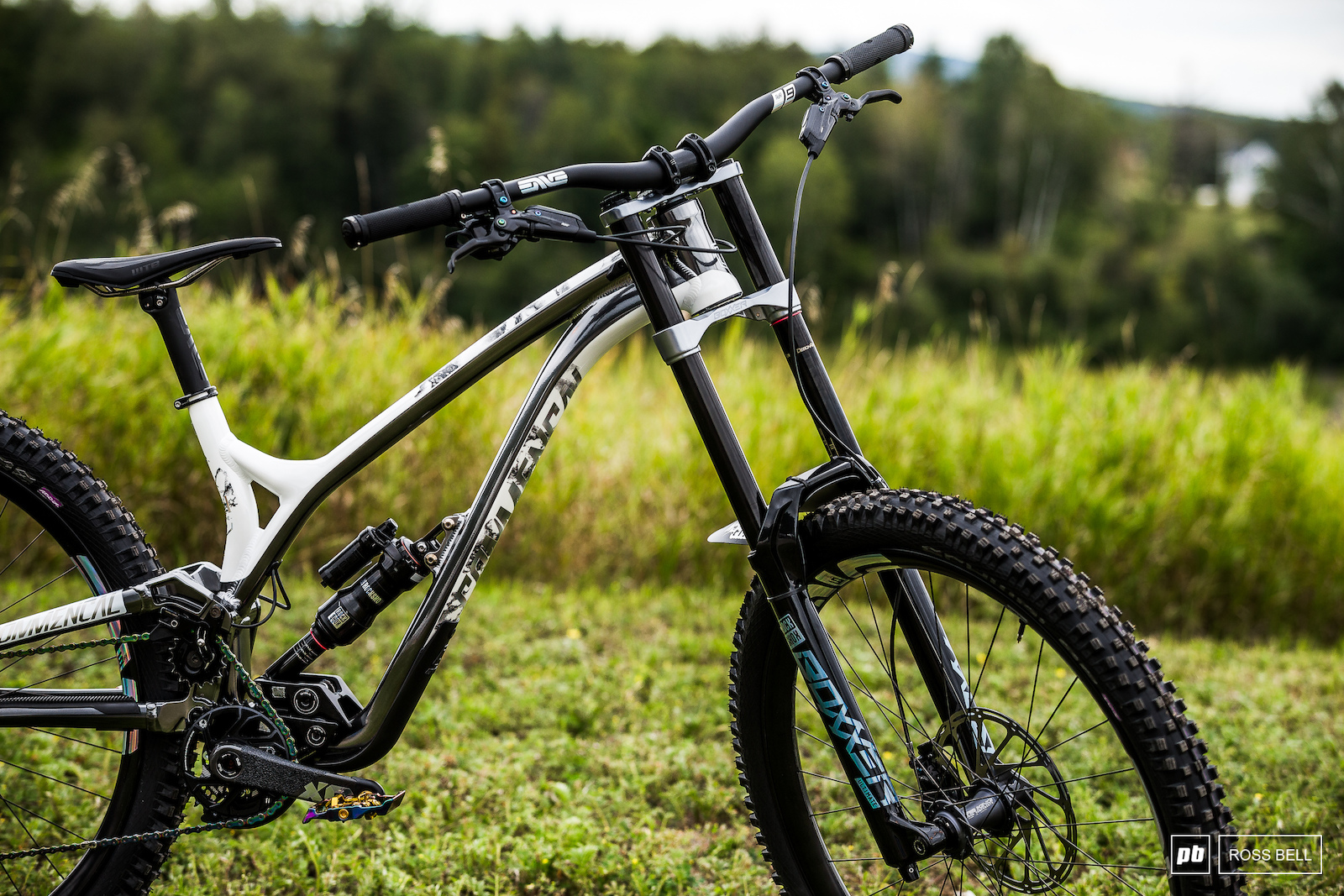 Pierron has been on the same bike for several years but each season, things have changed a bit. He's still rolling with 29" wheels front and back, steering clear of the mixed wheel size we're seeing some racers running, for the time being. 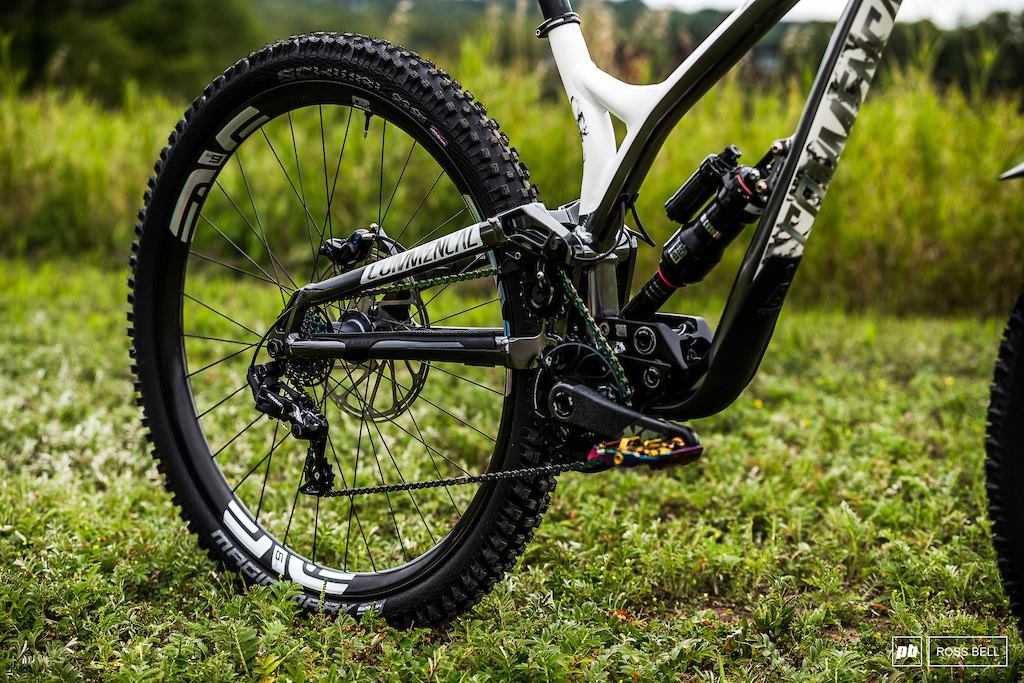 The bike has had a new rear end on it since Fort William. The change makes the back of the bike feel stiffer, according to Pierron, and he feels that the energy transfer is better now, especially when pushing the bike into rough sections of the track. 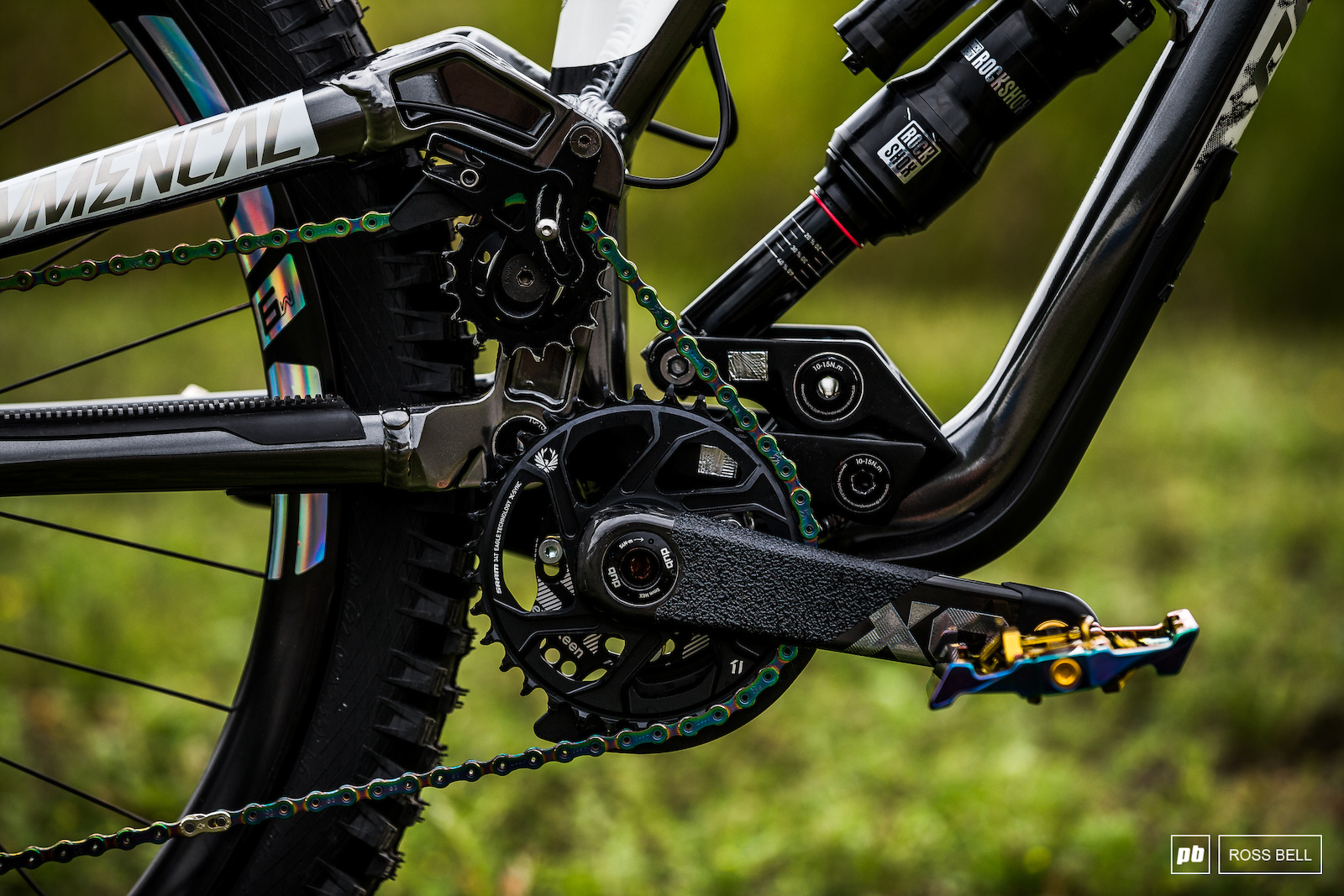 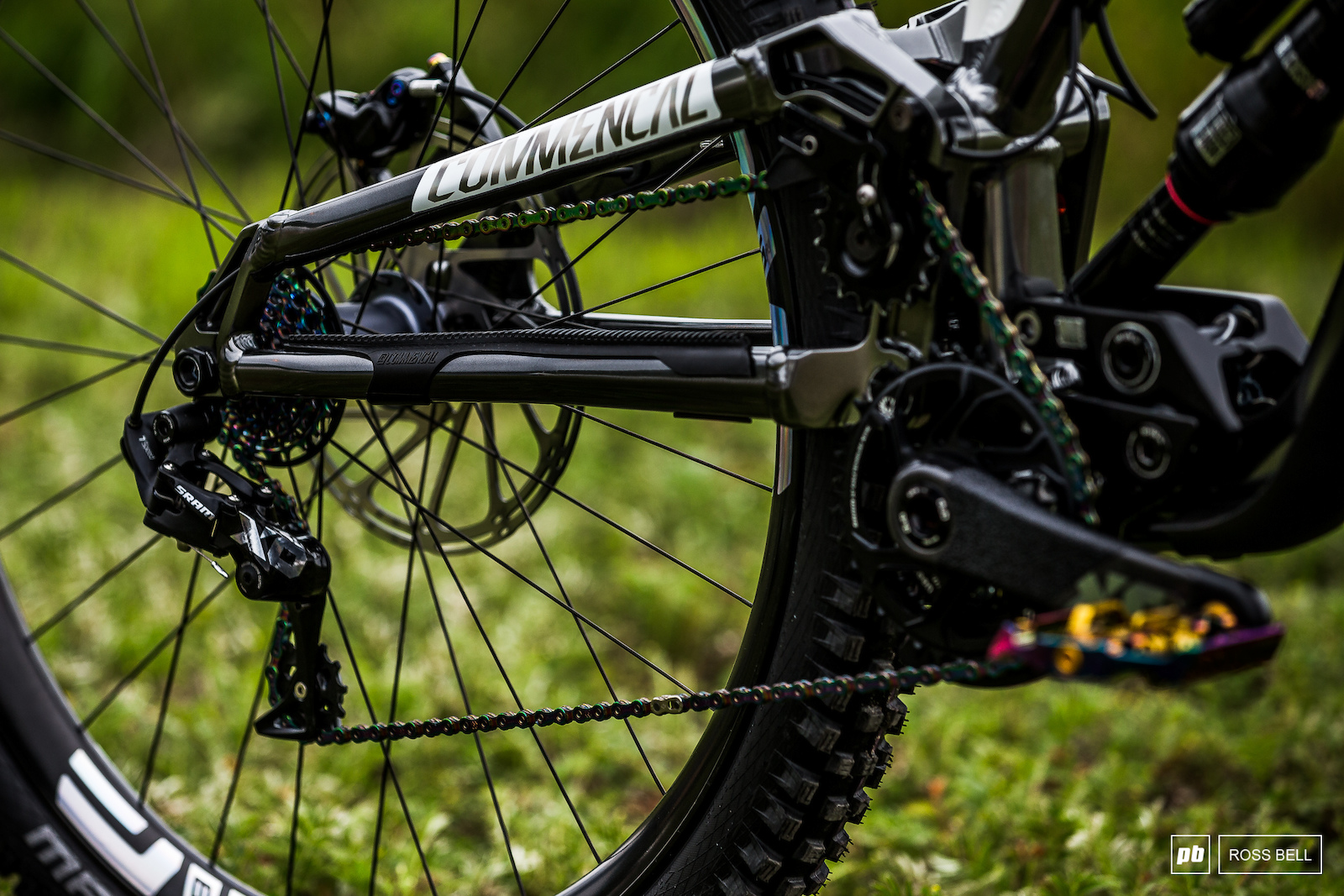 SRAM's XO DH drivetrain rolling up and over the idler pulley on the Supreme DH. 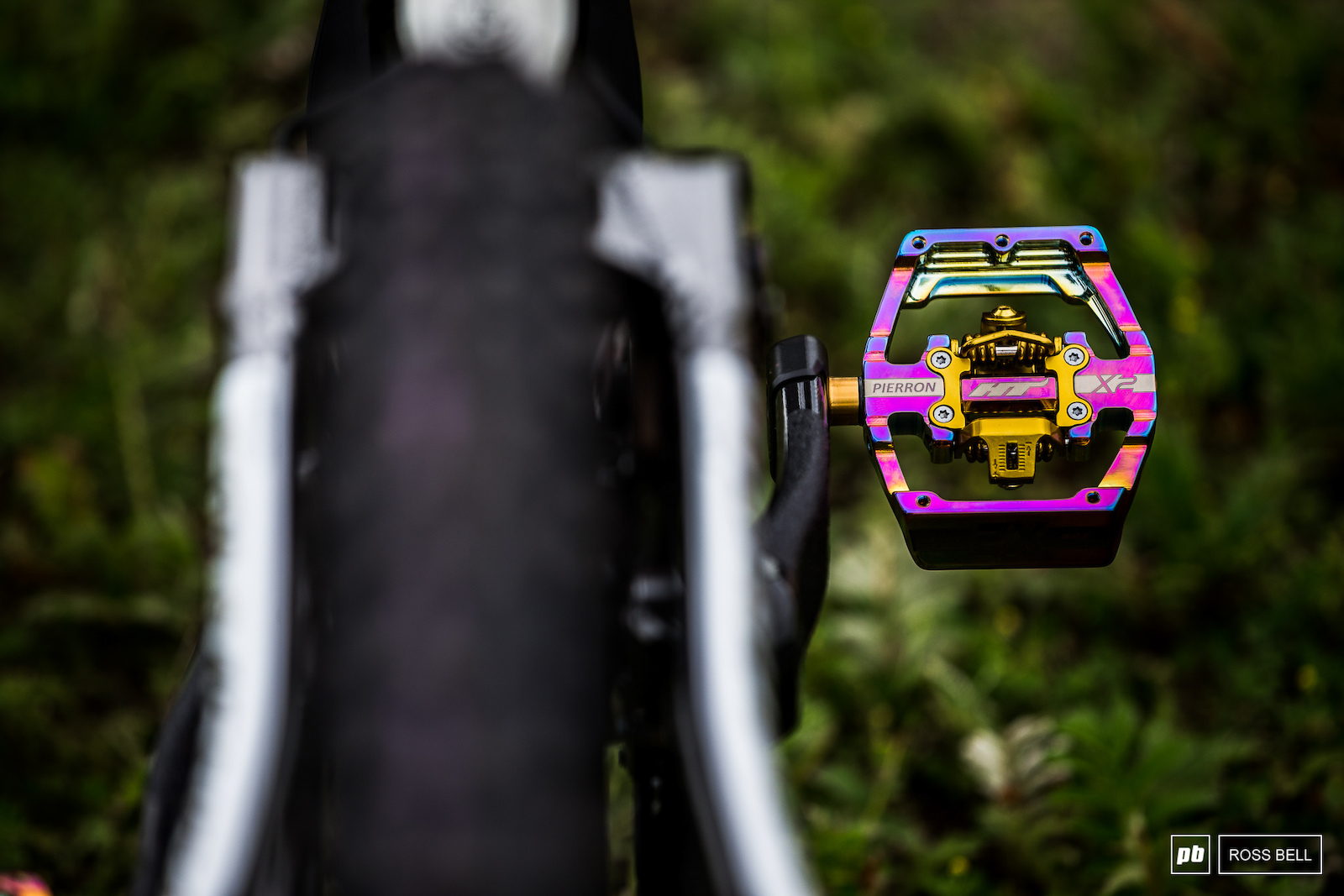 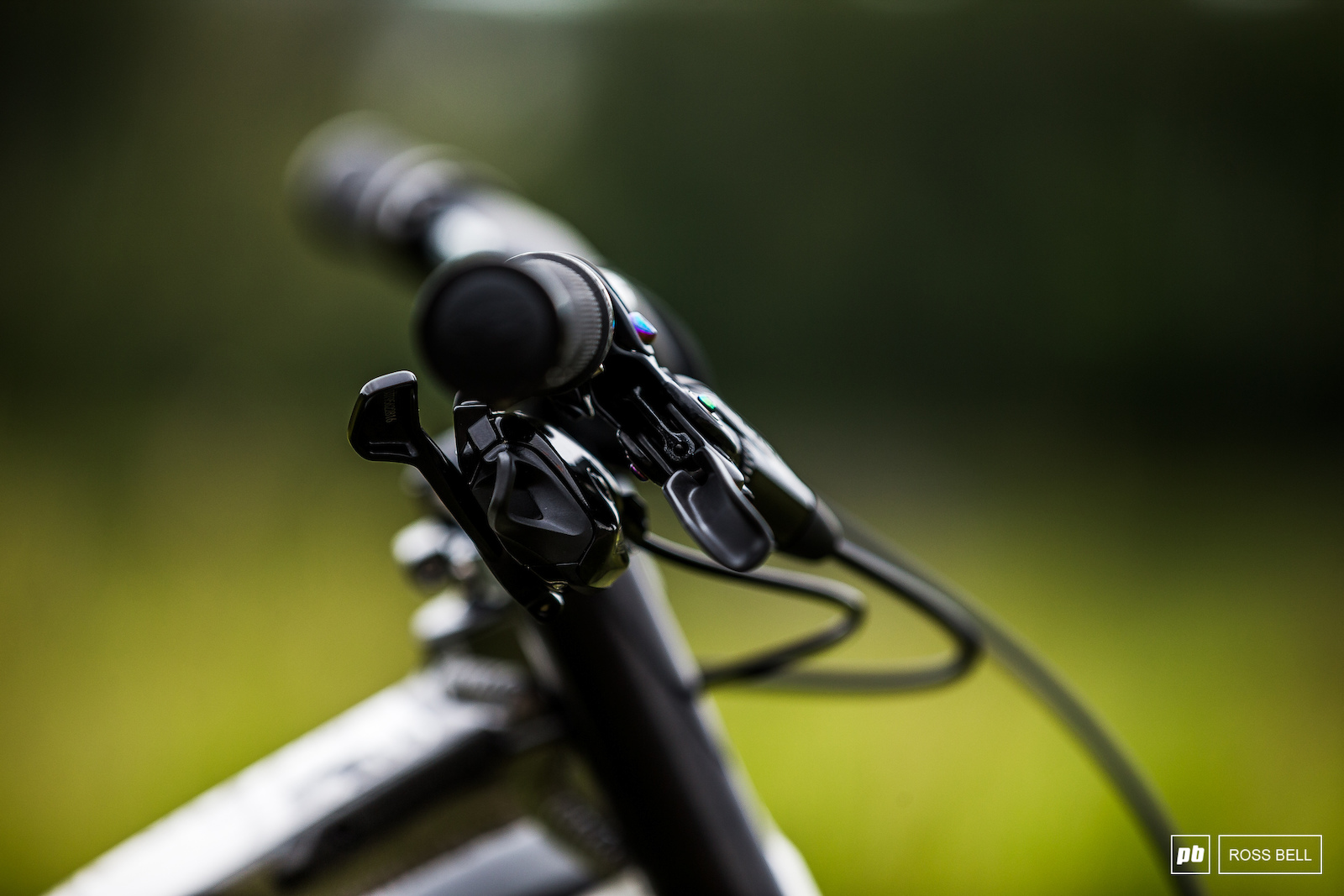 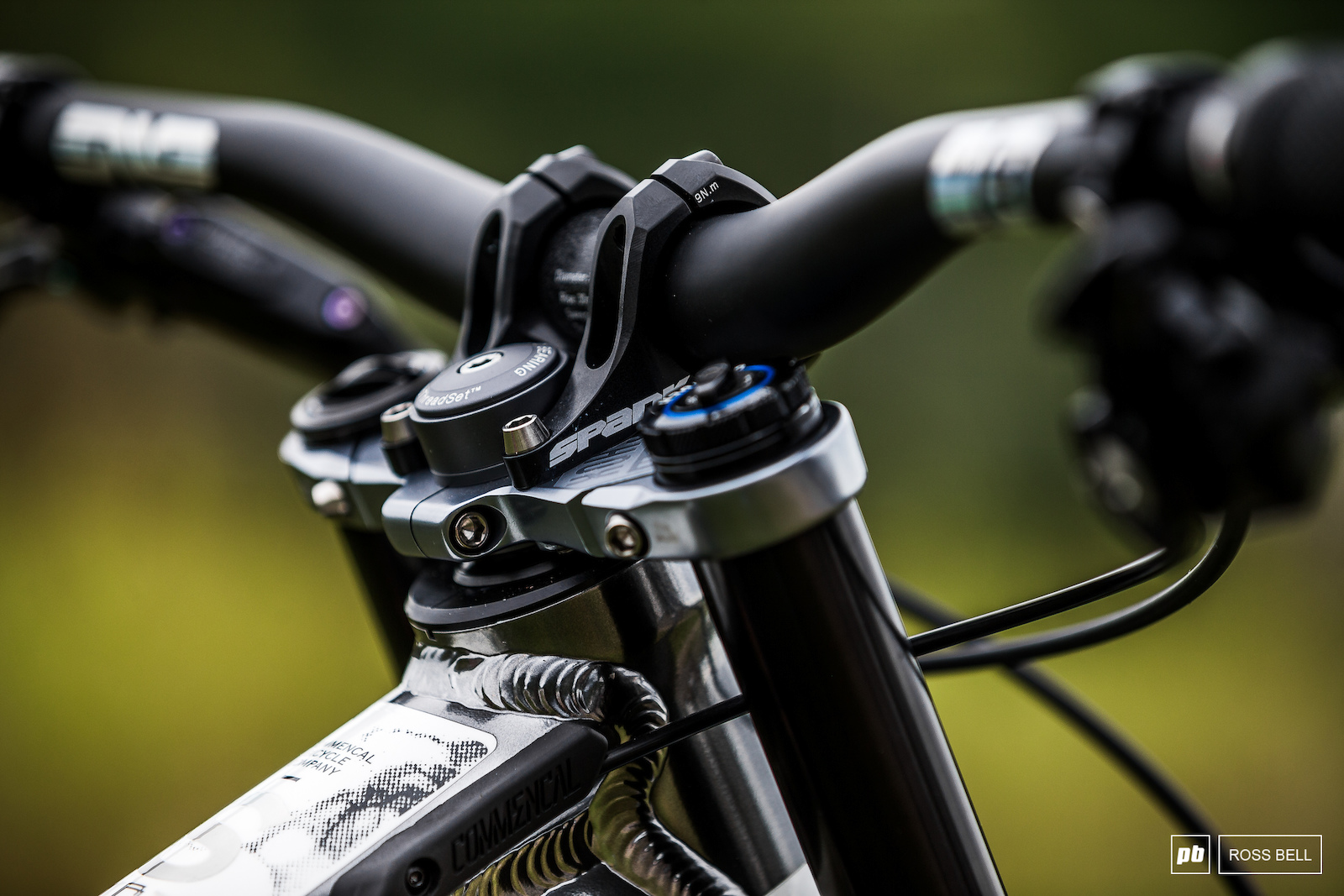 The Code RSC levers have a good amount of angle to them. A Chris King headset holds things in place. 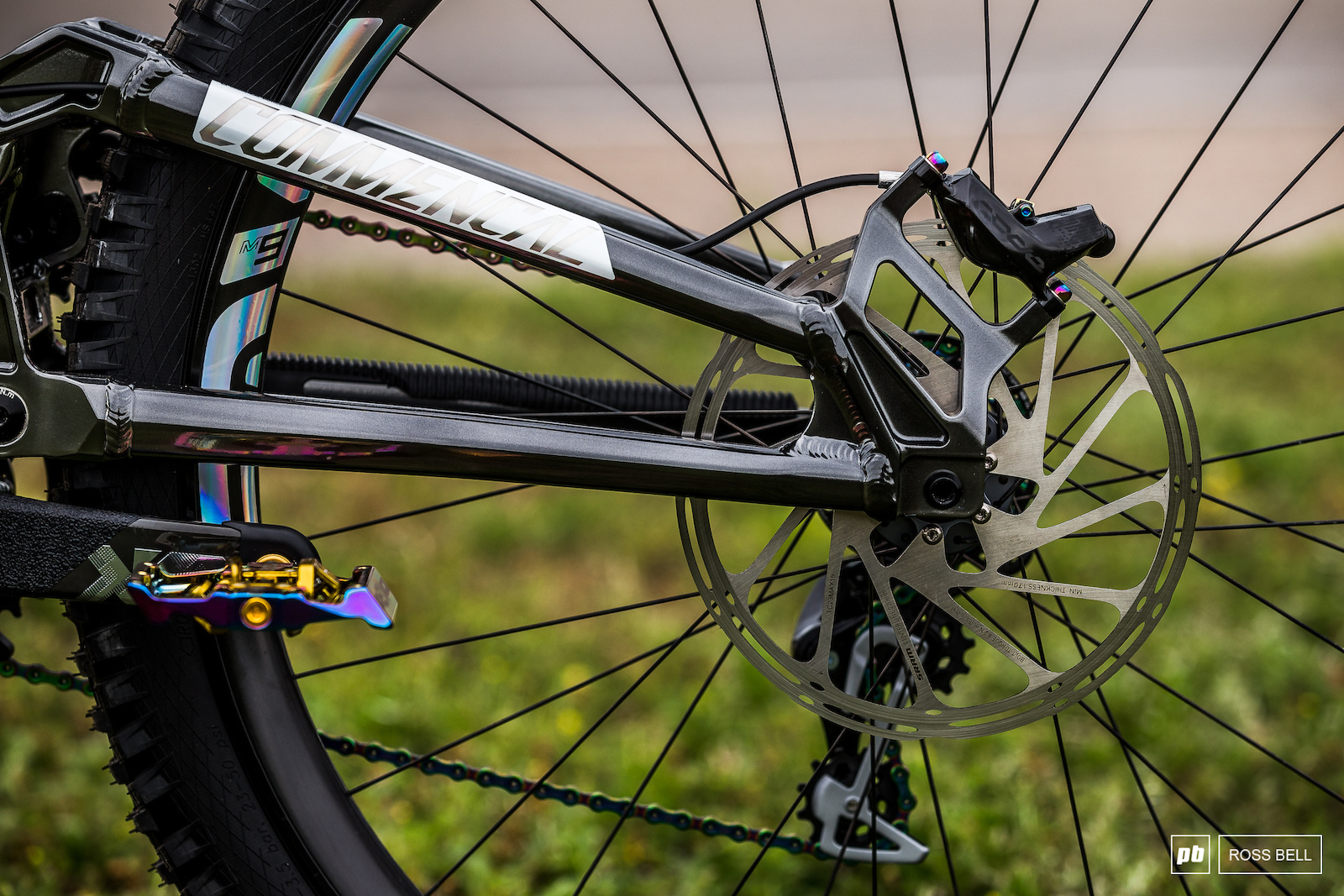 No adapters needed to step up to the large rotor size here. 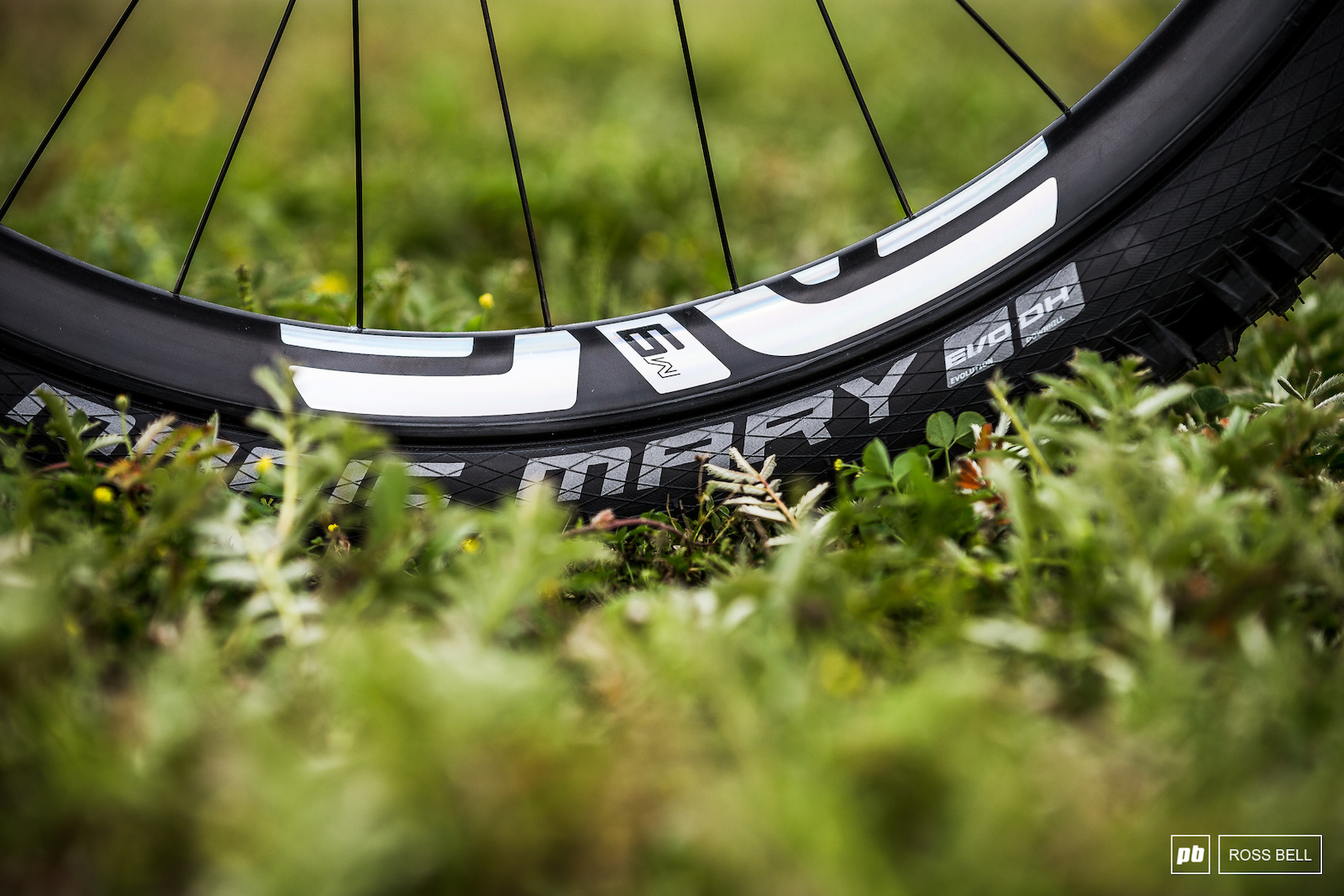 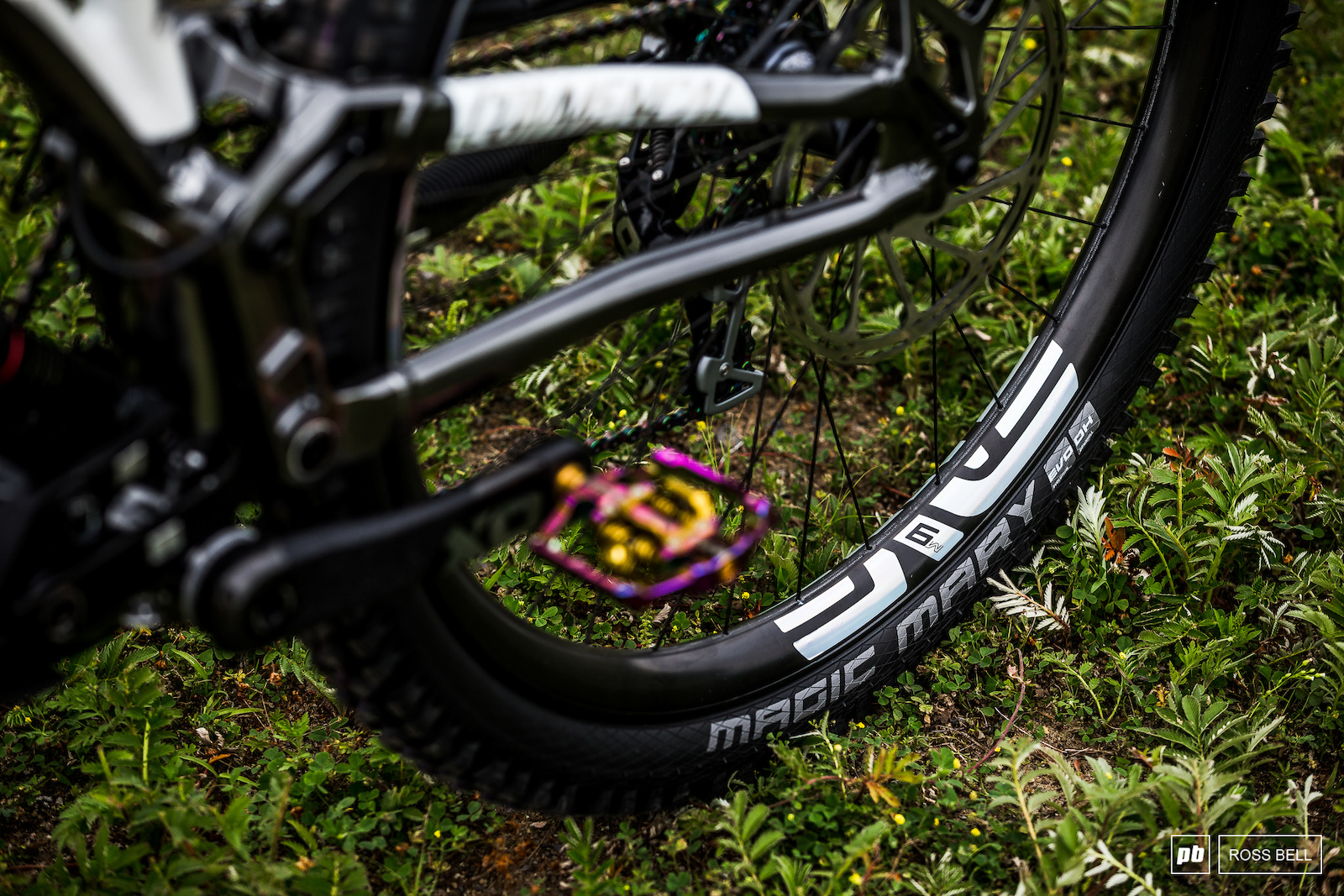 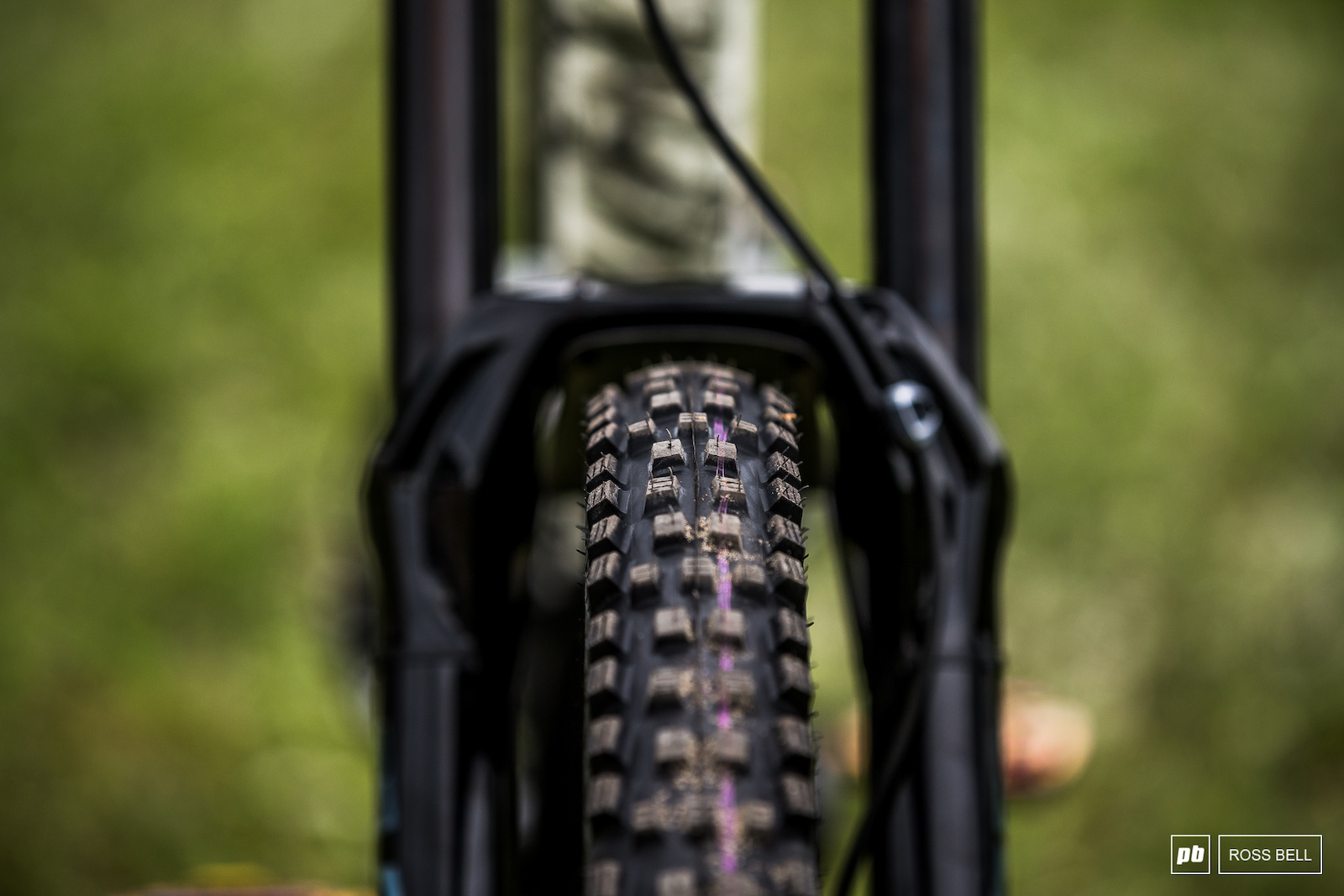 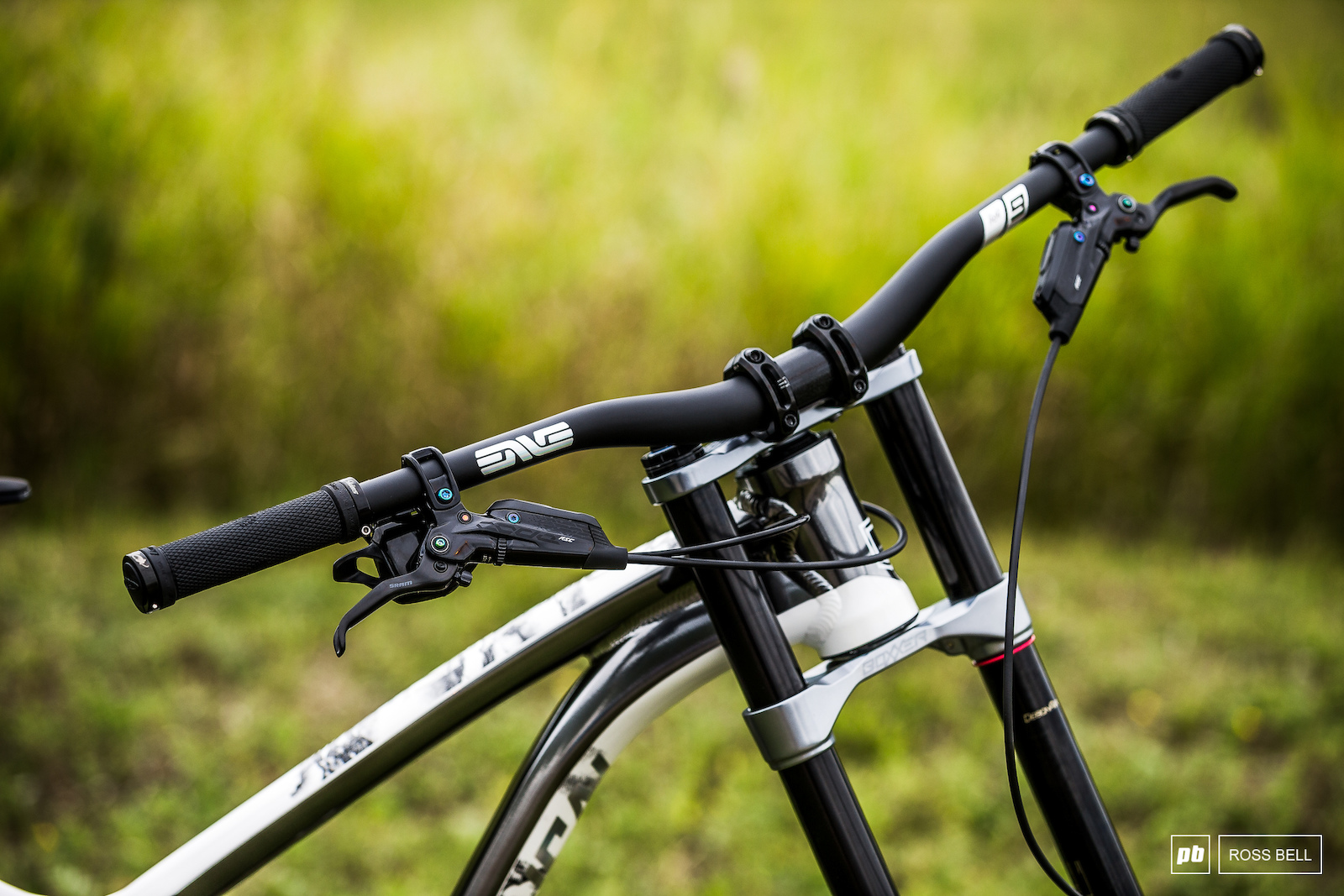 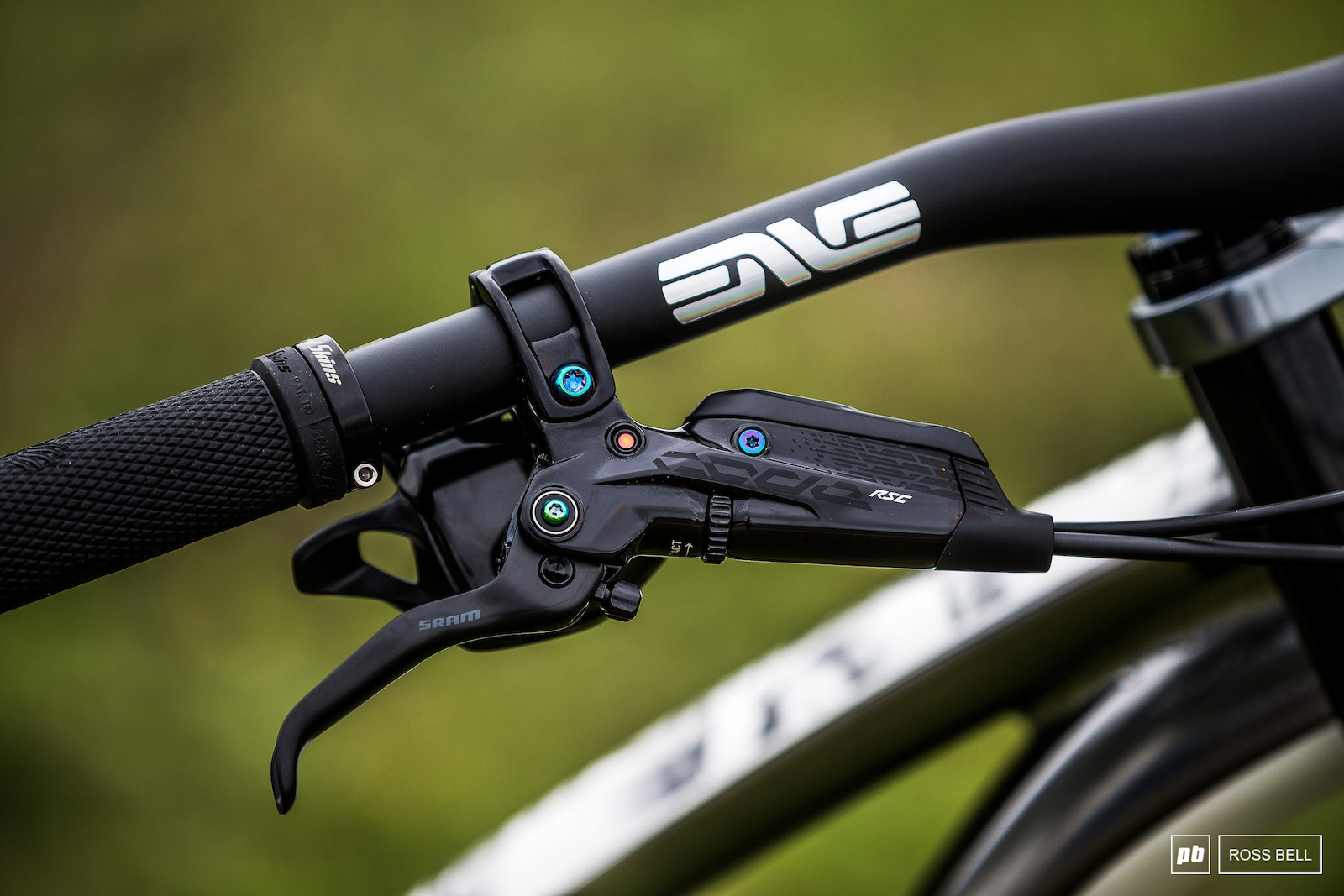 ENVE handlebars, a Spank stem, and custom anodized bolts throughout. 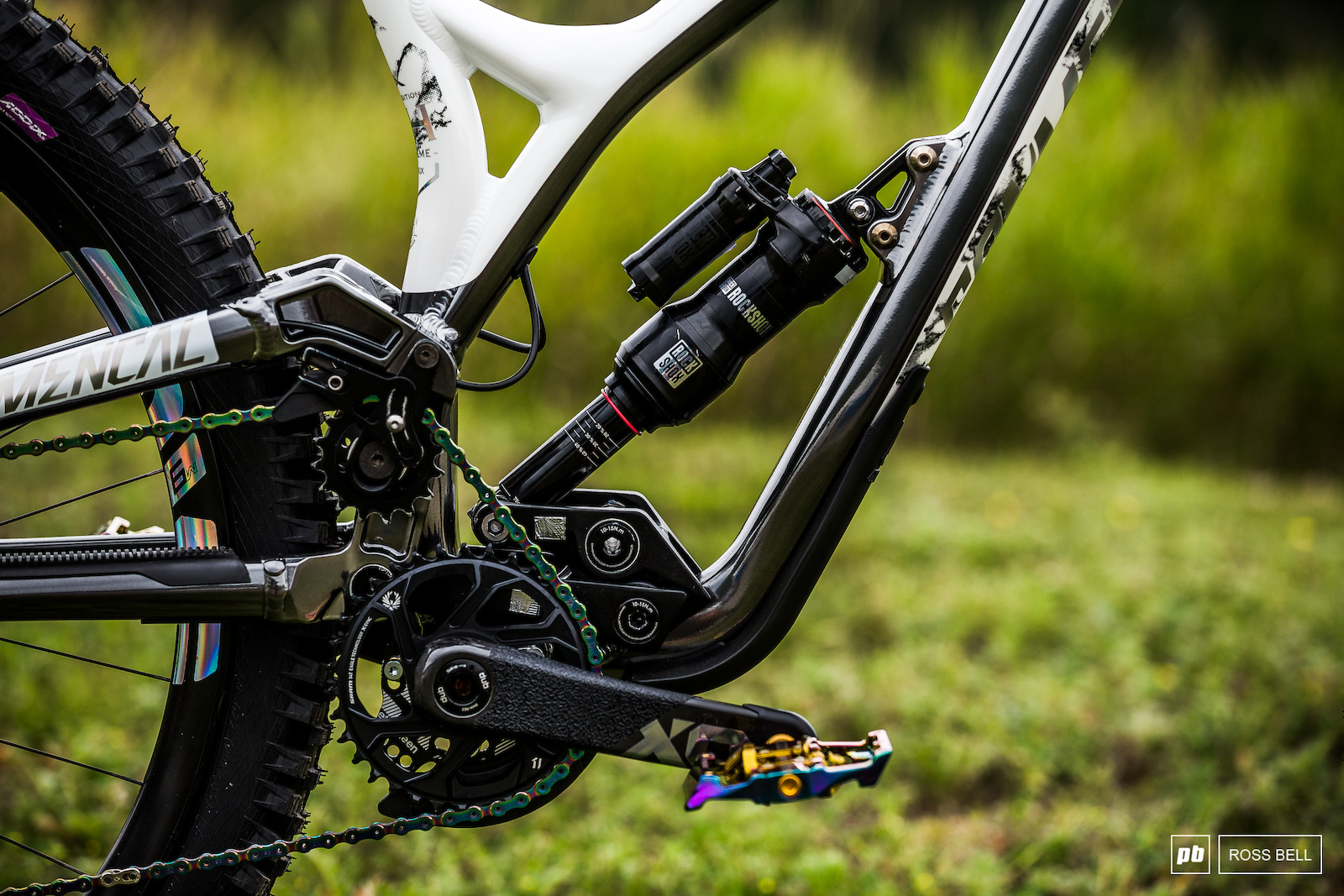 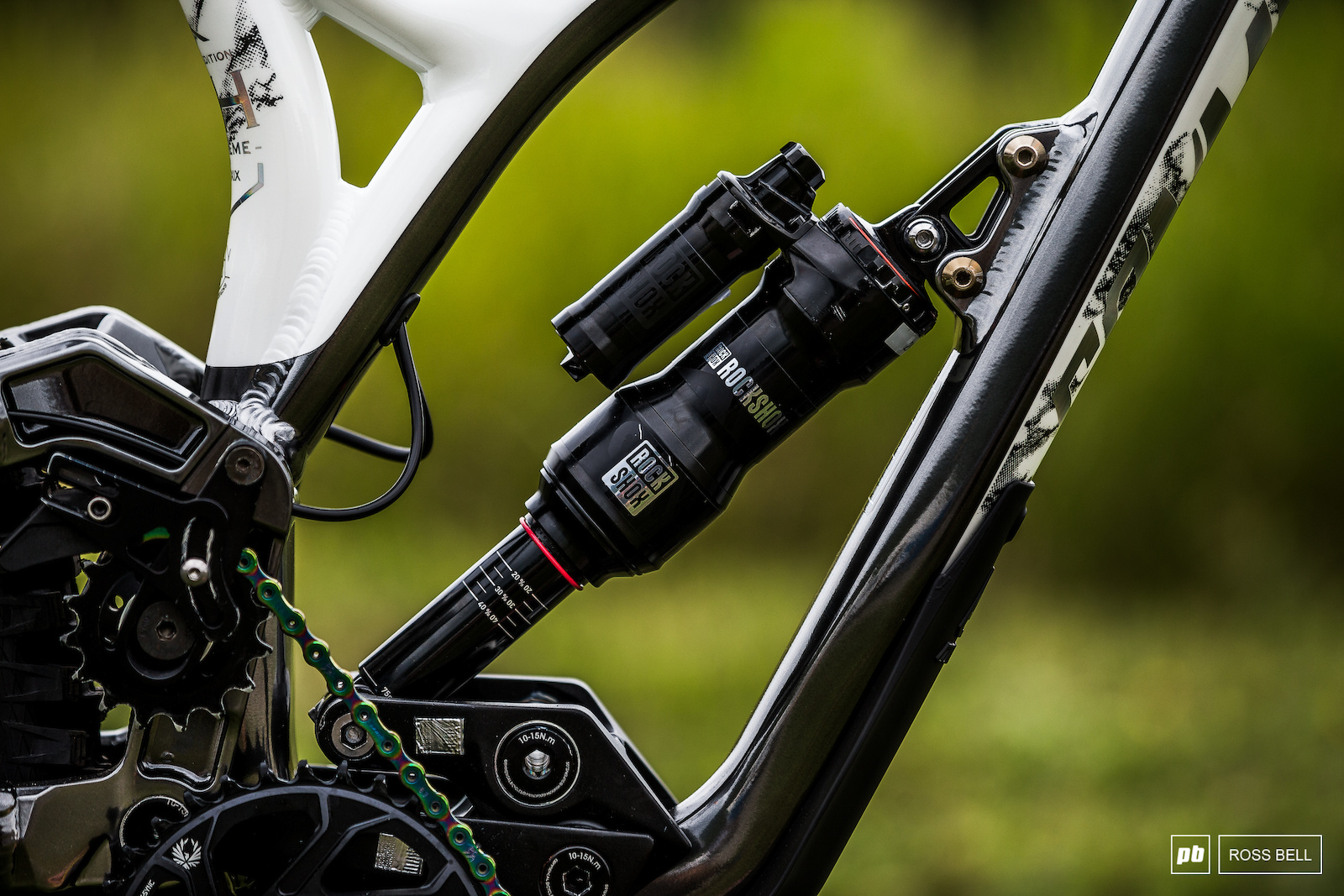 Suspension duties out back are managed by a RockShox Super Deluxe shock. Pierron doesn't keep his settings memorized but you can bet that his mechanic knows exactly how many clicks and volume spacers there are. 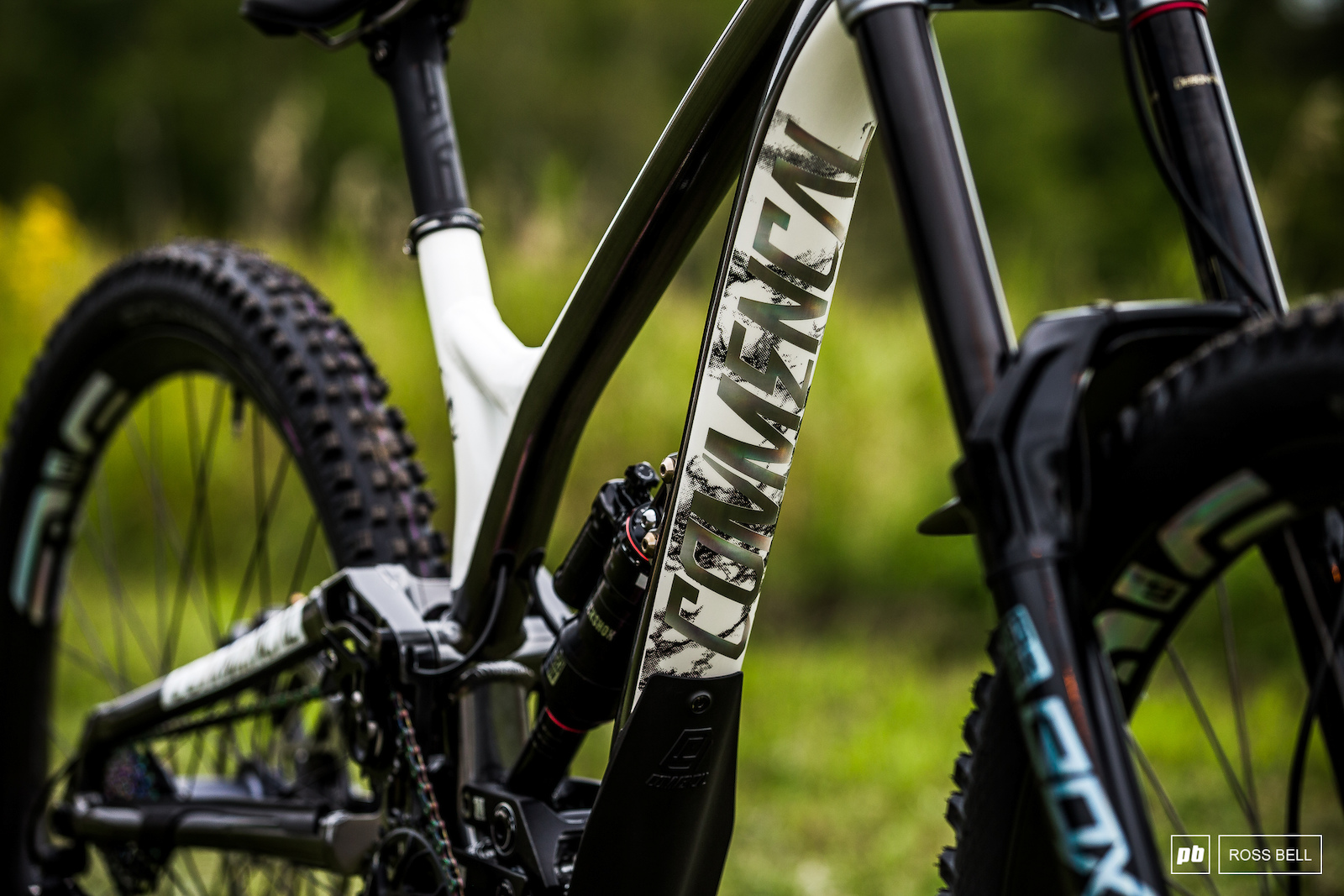 WAKIdesigns (Aug 30, 2019 at 8:07)
And if your frame has oil slick idler pulley, you trump all the Enve kitted Yetis with Push Eleven Six shocks and AXS drivetrain. Even if it weighs as much as 2001 Stinky, that is more than a dentist chair. points lost for non near-horizontal brake levers though...

Drew-O (Aug 30, 2019 at 8:45)
Seems this year it's all about printed/textured/marble-effect type paint. I'm actually curious how some of that is achieved; decals? Or some fancy-ass direct printing setup?

jimoxbox (Aug 30, 2019 at 8:22)
It’s weird when I got some carbon wheels I changed all my suspension settings to make the bike feel more like my alu wheels. Sold the carbon ones in the end....

WAKIdesigns (Aug 30, 2019 at 13:38)
I rode carbon wheels on dh bike straight after riding alu wheels on enduro bike, and every 100m I wanted to stop to check whether I flatted or not. And Dh bike had moar air installed... boing! Bang! Bang! Boing! Dong!

guylovesbike (Aug 30, 2019 at 11:52)
Us canadians have a very intricate mix of imperial and metric system, measuring our pool temperature in F but exterior temperature in C, human height in Ft, construction lenghts in inches, road length in Km and body weight in pounds.

60% of the time it all makes sense

Will-narayan (Aug 30, 2019 at 12:33)
@guylovesbike: Damn, that's tricky. It even caused a plane to crash I think, when metric dude asked for X liters of gas, and imperial dude filled the plane with X gallons...

Our food is in grams and kilos and people measure their weight in stones and pounds and our body height in feet but our beds are in meters ????

stumphumper92 (Aug 30, 2019 at 7:52)
Dislikes enabled so pinkbikers can let you know how much they disagree with anything that's ever said

justanotherusername (Aug 30, 2019 at 7:55)
Looks like this would have increased anti squat when compared to the production model, is that what he refers to when he talks about improved energy transfer?

justanotherusername (Aug 30, 2019 at 9:29)
Why the downvotes peoples? Is what I have written upsetting somehow? If you don't agree feel free to say why rather than just flick your poop and run.

SonofBovril (Aug 30, 2019 at 10:23)
I think he was referring to the stiffness of the rear triangle not the anti squat

preston67 (Aug 30, 2019 at 11:24)
The anti-squat would only change if they moved the pivot point. That seems doubtful as it would require a new front triangle as well. The whole point of a high pivot/idler design is to allow the rear axle path benefits of the high pivot without negatively affecting chain growth which is often related to the amount of anti-squat.

Unless you are basing your question on something I'm not seeing. Why do you think this rear end woudl change AS ? They don't really say what changed about the rear end except power transfer is better. I suspect the pivots did not change or anything like that, its just thicker aluminum or otherwise stiffening up the rear sectoin.

justanotherusername (Aug 30, 2019 at 12:32)
@preston67: Huh? They have changed the idler position, it’s no longer concentric with the pivot and therefore anti squat will have changed, in the same way that changing chainring size will change anti squat - the idler now also looks to be swingarm mounted.

I’m not sure you have a good grasp of anti squat?

Will-narayan (Aug 30, 2019 at 12:37)
AFAIK, the whole rear triangle changed. It's burlier than the production model of the one that the other commencal teams are using (Estaque, Frixtalon, etc) so I guess that's what he's talking about.
They've been playing with the idler position pretty much since the beginning of the bike, or just after the couple of first few races.

WAKIdesigns (Aug 30, 2019 at 13:41)
@justanotherusername: yes I genuinely despise folks who whine on getting negprops. or worse, they write: “negprop me all you want”. So, let the negprops commence

gabriel-mission9 (Aug 30, 2019 at 15:20)
I dont think the idler ever rotated concentically with the main pivot. It was always slightly below, as it is on the new design. Whether that position has changed slightly I couldnt say. The older swingarm was a different shape, running in a straight line from main pivot to rr axle. The new one kinks up an inch or two first, so the idler pulley looks more exposed. I think they are in at least roughly the same position compared to the main pivot though.

preston67 (Aug 30, 2019 at 17:51)
@justanotherusername: My presumption was that the pivot and idler did not change, I'm not an expert on the configuration of the Comencal frame. If the pivot or idler position has been changed then it would affect AS.

justanotherusername (Aug 31, 2019 at 4:48)
@preston67: "The anti-squat would only change if they moved the pivot point" - Your not only not an expert on Commencal frames, you are also not an expert on anti squat.

justanotherusername (Aug 31, 2019 at 4:53)
@gabriel-mission9: You are right the old idler wasn't concentric but the chain did exit almost in-line with the top of the pivot, this one does look a fair bit lower and seems to have an adjustable location too, probably for fine-tuning A/S which could be useful depending upon the type of course, if the rider uses flats / clips etc etc

I have a commencal high pivot and yes there were two changes on the team bikes. The current rear triangle can be a bit flexy as most of the work is being done by the upper tubes while the lower (chainstay) is leveraging the suspension. The new design does a better job spreading the lateral force out across the entire triangle and this improvement has been mentioned by team riders.

Moving the idler up,down & back and forth changes anti-squat and when/how that AS occurs. Moving the idler below the pivot increases AS as it's pulling the triangle down under pedaling power. Too much and it'll bob from chain growth. Go above the idler and it'll pull the rear suspension up under power.

kopaczus (Aug 30, 2019 at 9:14)
Any idea why he is the only guy (that I can remember from all the bike checks) that runs that different rear triangle? Says here it's moar stiff, but wouldn't that also be an advantage for all the other Commencal guys?

chrisjk (Aug 30, 2019 at 9:48)
Sorry Matt, I read is it possible, and decided to give it a try on your comment...I now see you write will it be possible and now you are stuck with my stupidity downvote that I can't change.

Dropthedebt (Aug 30, 2019 at 10:43)
on the surface its just another data point. however, research shows that by showing both upvotes & downvotes, people consider their comments for longer before posting.

WAKIdesigns (Aug 30, 2019 at 13:34)
@samdeatley: yeah imagine what they must have done to it’s bollocks to make it feel better than the extravagant floor pump it is in the stock version. Like the vivid air. Jesus.

opignonlibre (Aug 30, 2019 at 11:28)
Well they are stupid but since they are so stupid and non-effective they don't slow him down. Stupid for those who can believe in anything and buy them, but good for the economy I guess so nothing wrong ha ha. At least these are only stickers, not some stupid drug, religion or sect that harm people's lifes.

iduckett (Aug 30, 2019 at 12:57)
Looks like some strain gauges on the linkage maybe? Or maybe... duct tape?
Below threshold threads are hidden

freestyIAM (Aug 30, 2019 at 8:02)
provides more information than the sum of up and down props. Before you could see a 0 but that could have been +1 -1 or +1000 -1000. The former is a throw away comment that no one cares about. The later is a comment that is really engaging the community and provides insight into how divisive the comment is.

matt-15 (Aug 30, 2019 at 9:05)
@brianpark: will it ever be possible to change your vote? many times I've accidentally clicked downvote when I meant to upvote