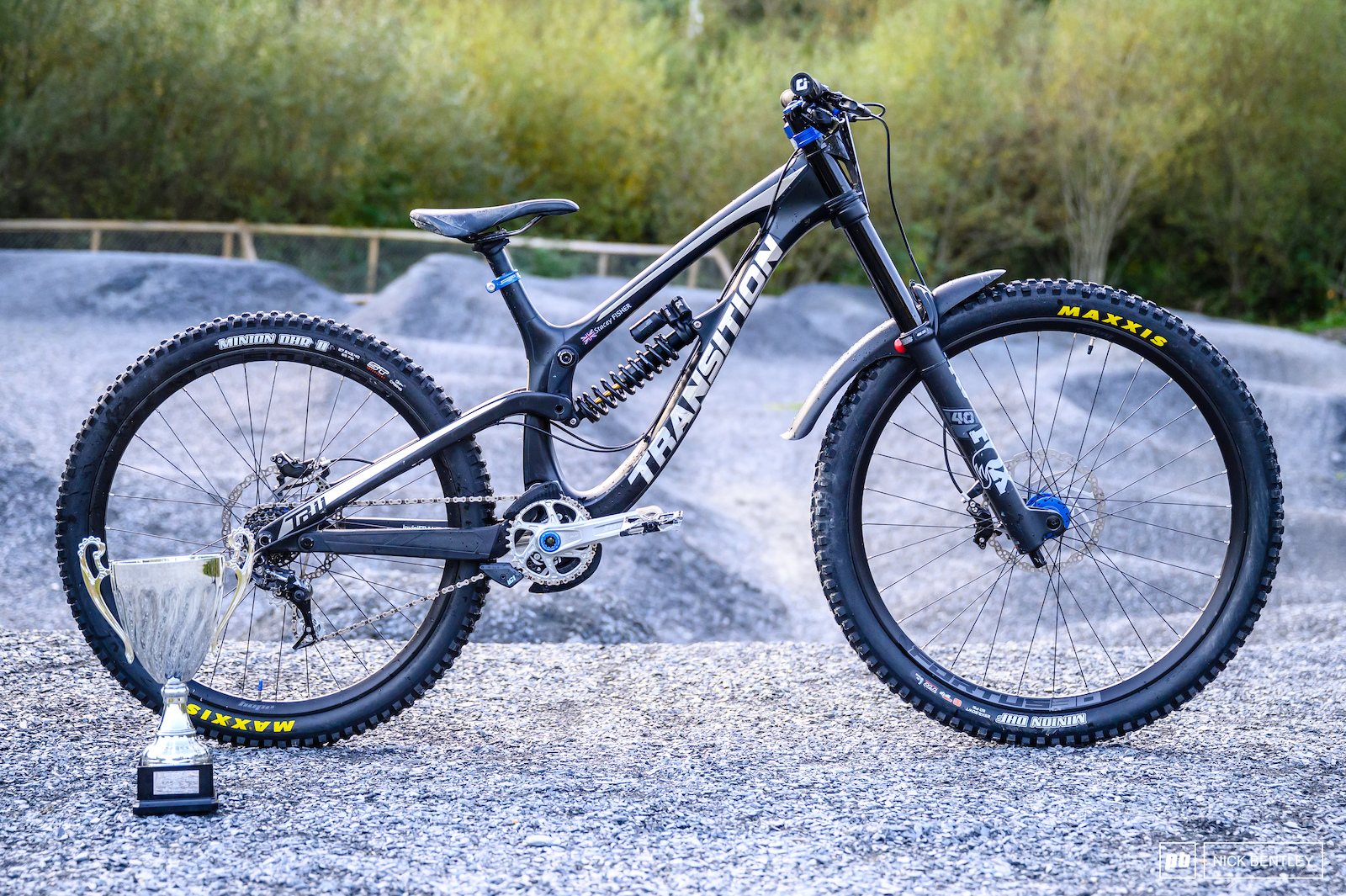 BIKE CHECKStacey Fisher'sTransition TR11Photography by Nick Bentley
After all the celebrations had ended at the final round of the UK National Downhill series we grabbed the female Elite winner Stacey Fisher's Transition TR 11 bike to take a look at it. With sponsors like Transition and Hope, this was never going to be an ugly bike and it doesn't disappoint.

There's more to this bike than looking good though, it has taken an absolute beating combating in everything from regional races all the way to the 2021 Downhill World Championships where Stacey finished 16th. 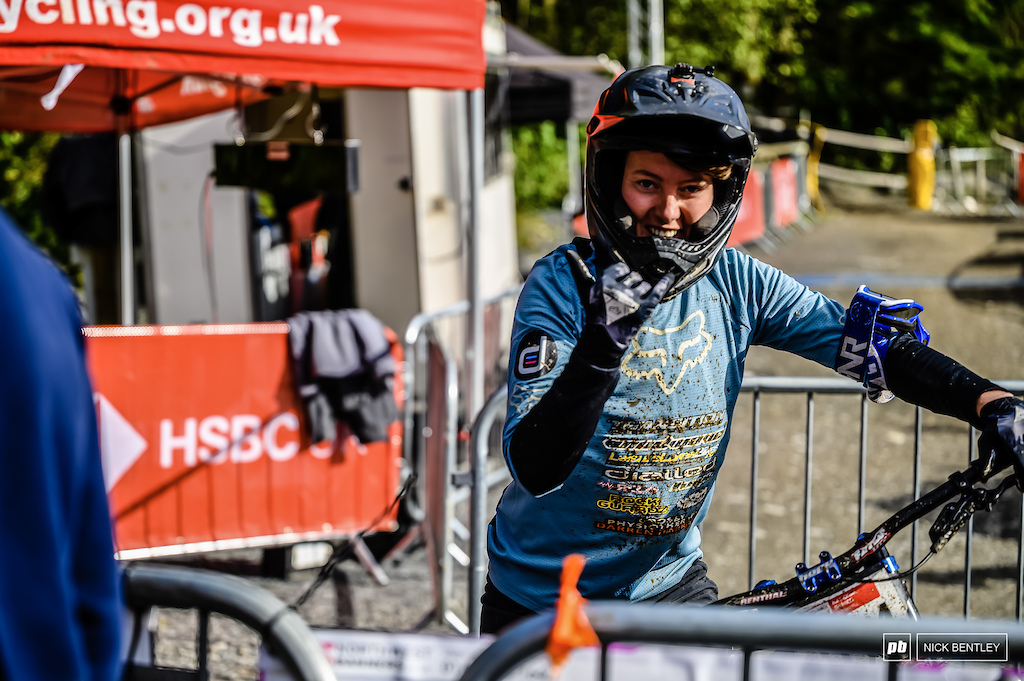 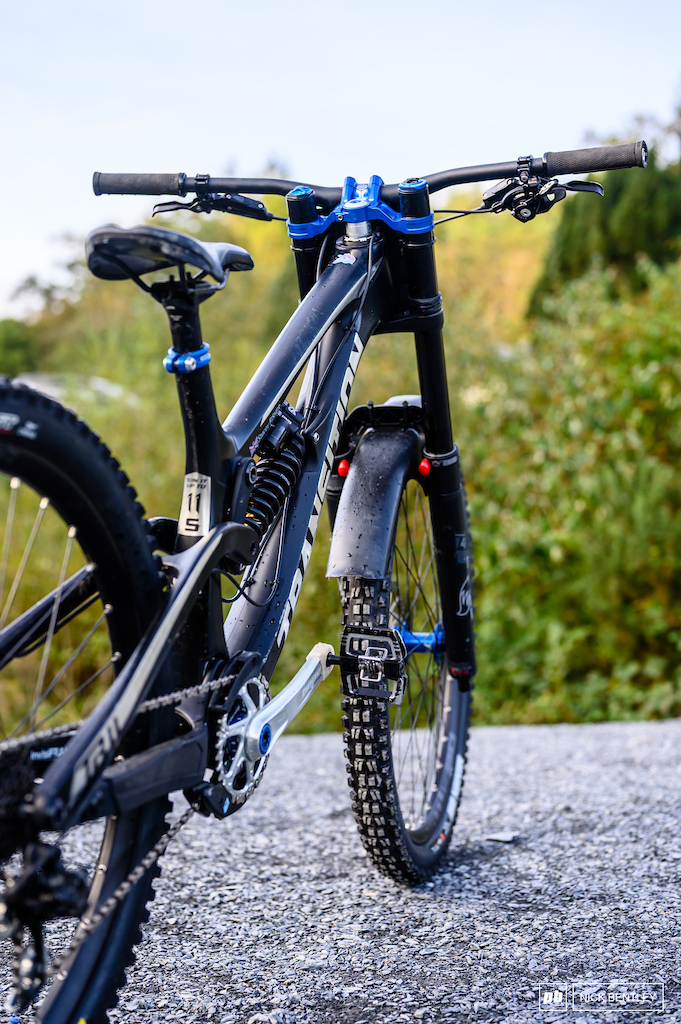 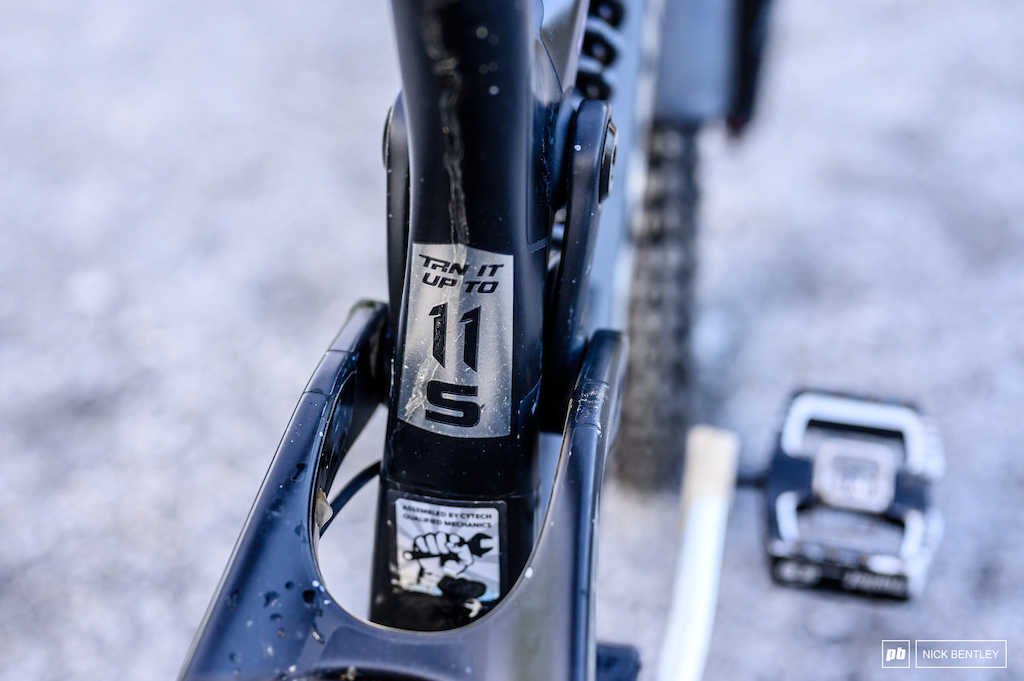 Stacey's Transition is a small frame and is a full carbon construction. The Transition TR11 uses the brand's Gravity GiddyUp Suspension platform. It's progressive by nature, has low leverage and minimal pedal kickback, this provides fantastic performance in a simple package. 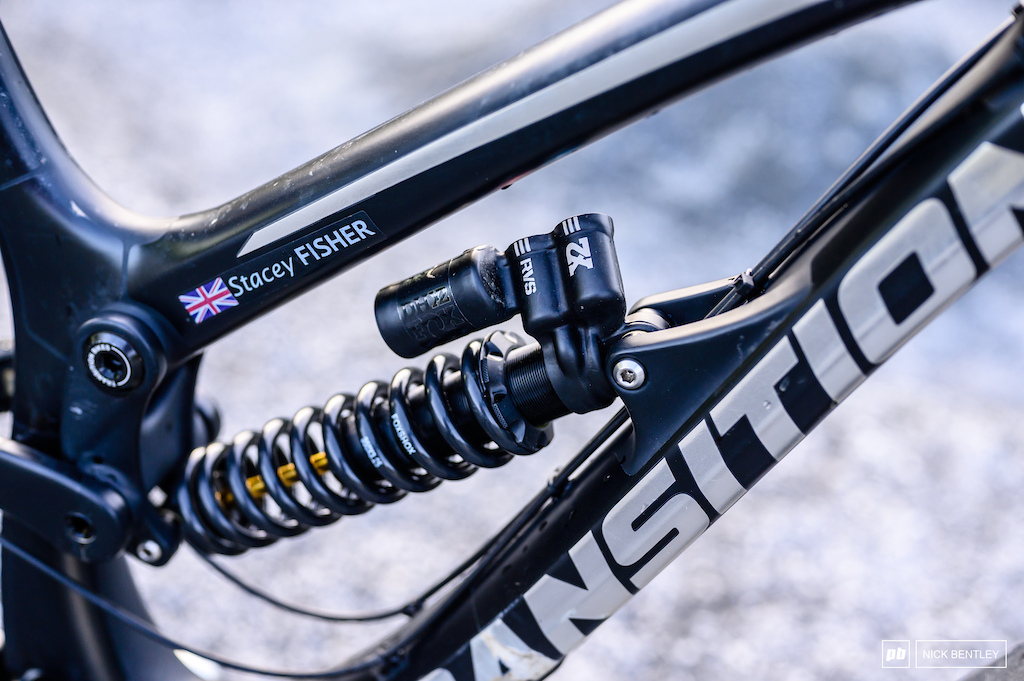 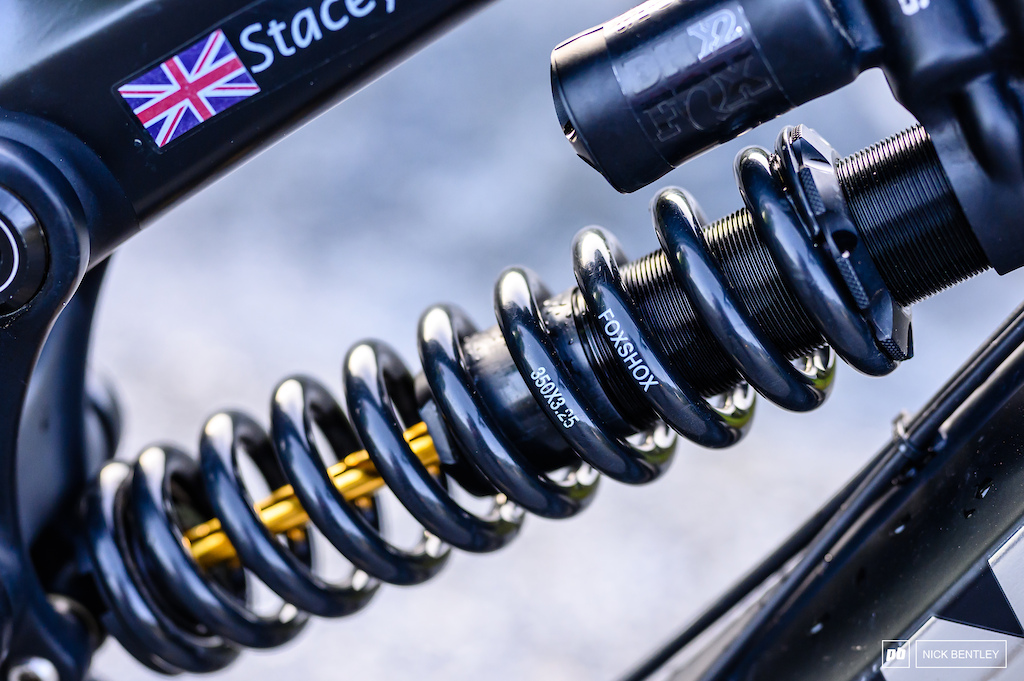 At the heart of the Transition's Gravity GiddyUp Suspension is a Fox DHX2 Factory Coil shock. Stacey is running a 350lb spring on her TR11 but that's all the information we can share as, like many Elite riders, Stacey has enlisted the services of Dialled telemetry to tune her suspension to exactly how Stacey likes it and those settings are a secret kept close to their chest. The one thing we can tell you is that Stacey has swapped out the Standard Fox 40 that came with the bike which was for a 27.5" wheel for a 29" wheel compatible set allowing her to set up her TR11 in a Mullet configuration.

The next big change is the Hope Top Crown with an integrated 50mm stem. As you would expect from Hope it's crafted from a solid billet of 2014 T6 aluminium and has been designed to increase the stiffness of the upper part of the fork, increase strength and give a super neat set-up. 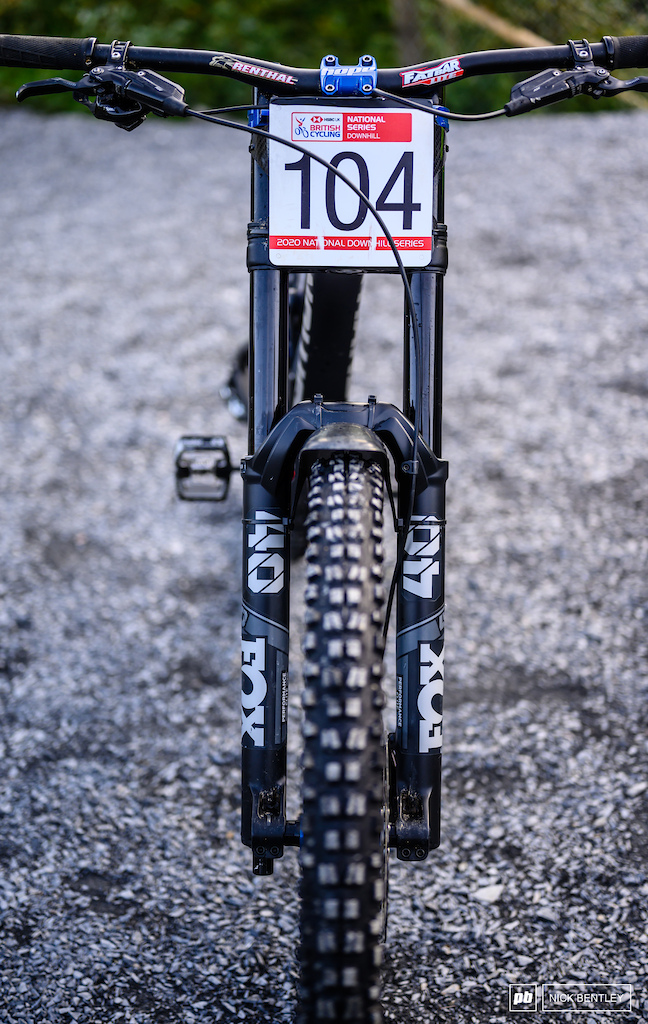 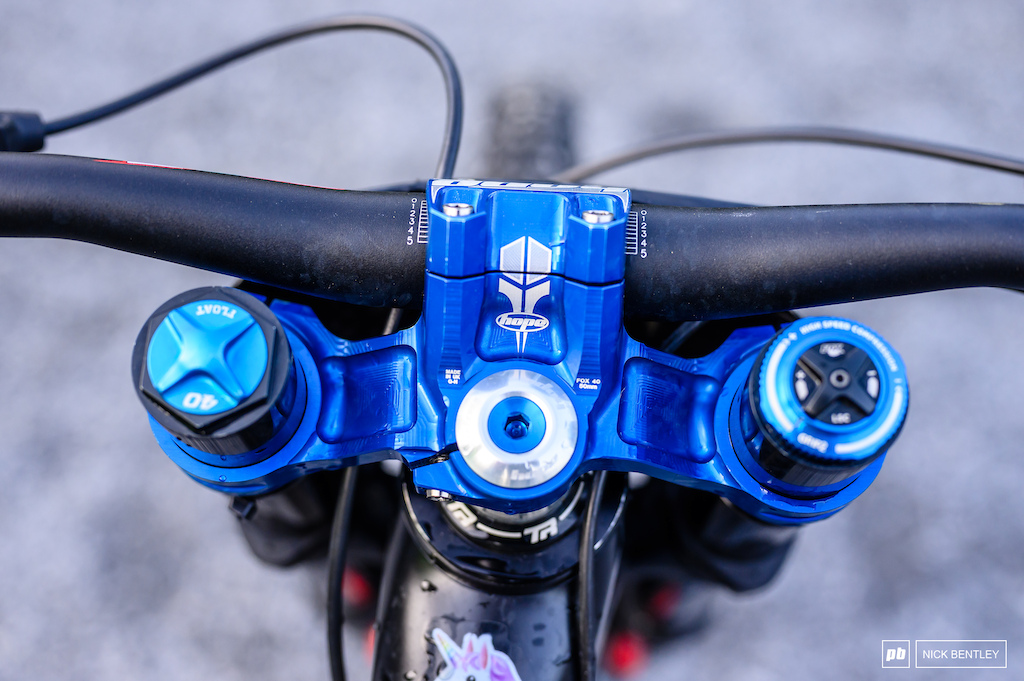 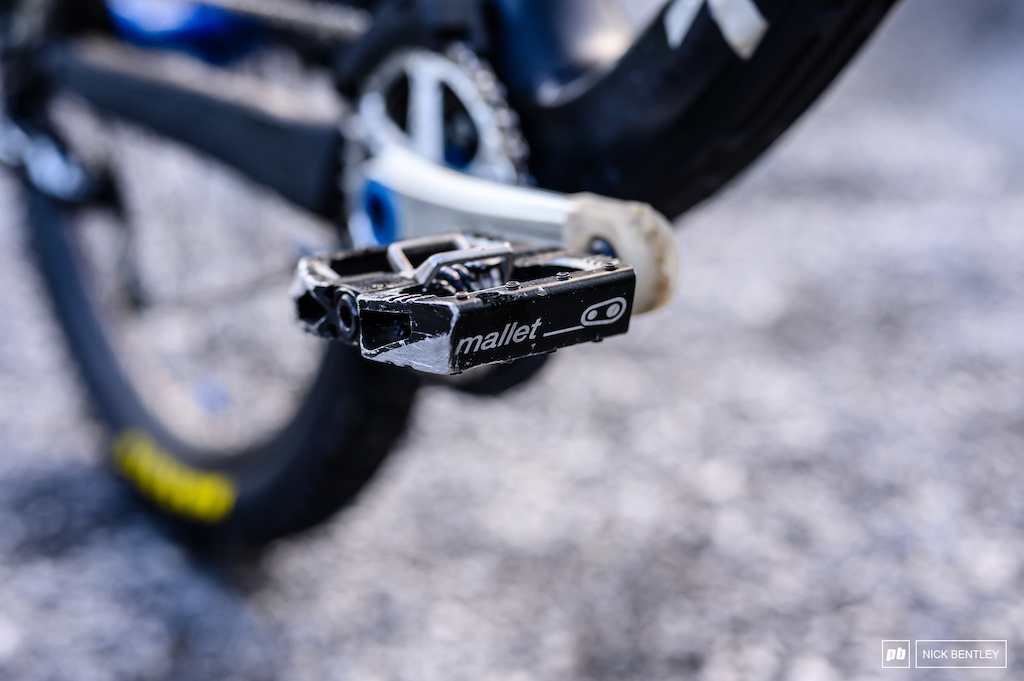 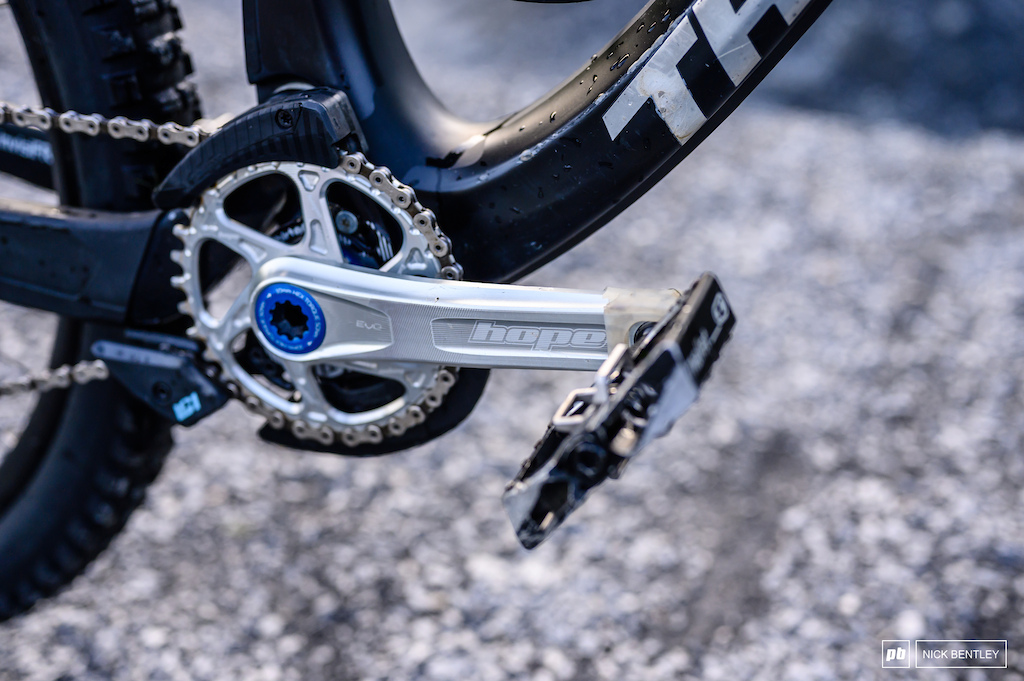 The drivetrain on this TR11 is treated to more Hope CNC jewellery with a set of 165mm long EVO cranks and Spiderless chainring running on a Hope Bottom bracket with the Chain kept in check by an E-thirteen Chainguide and tensioner. All of this is topped off with the DH pedal of choice the Crank brothers Mallet pedal. 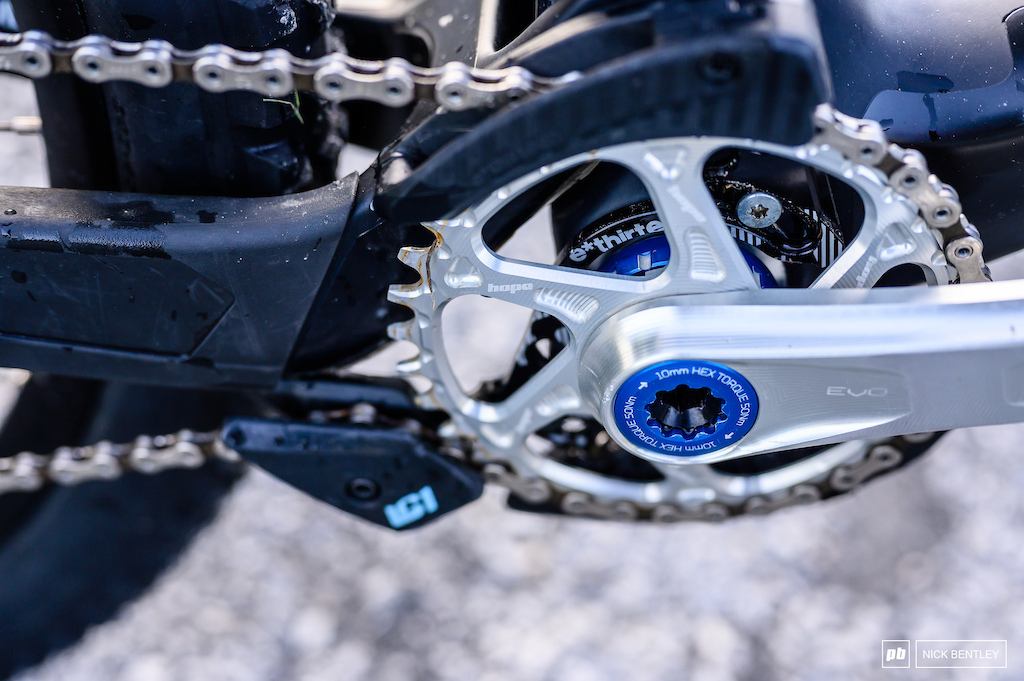 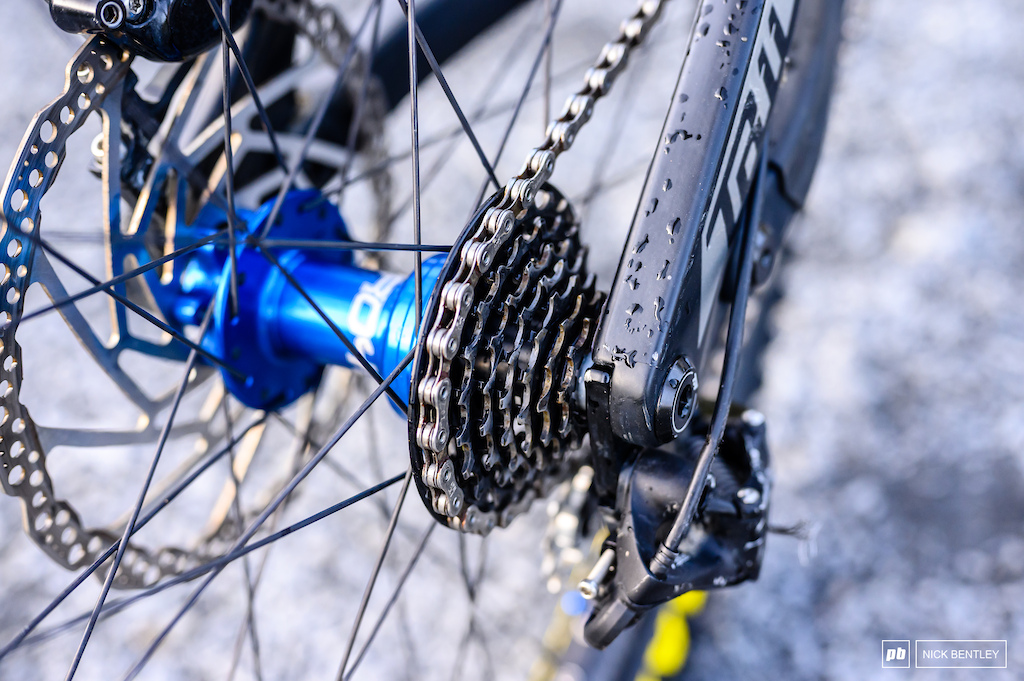 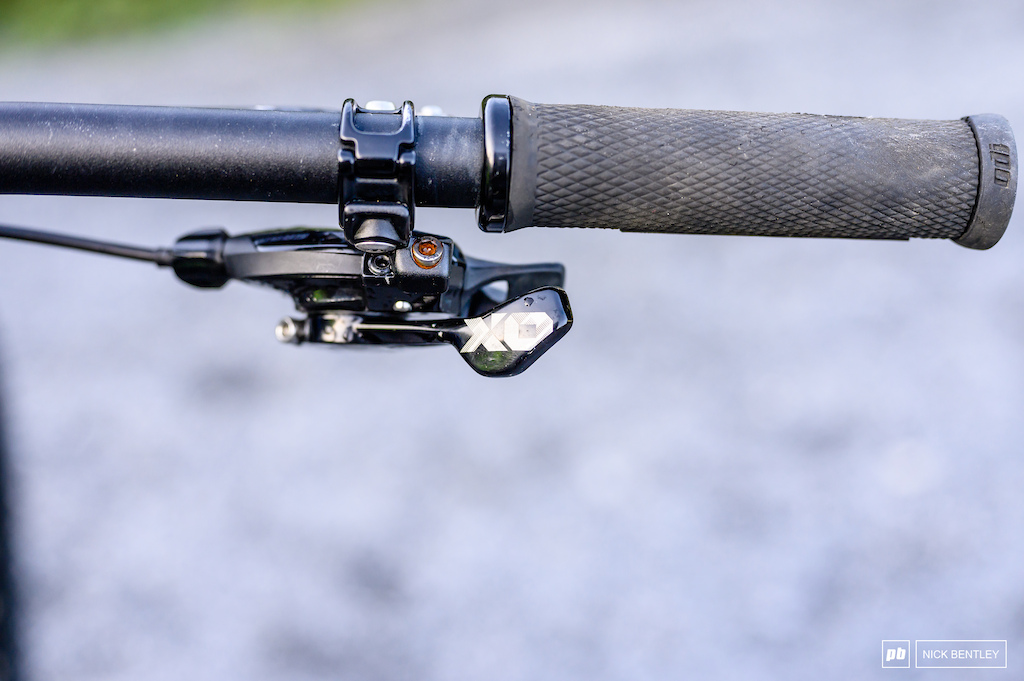 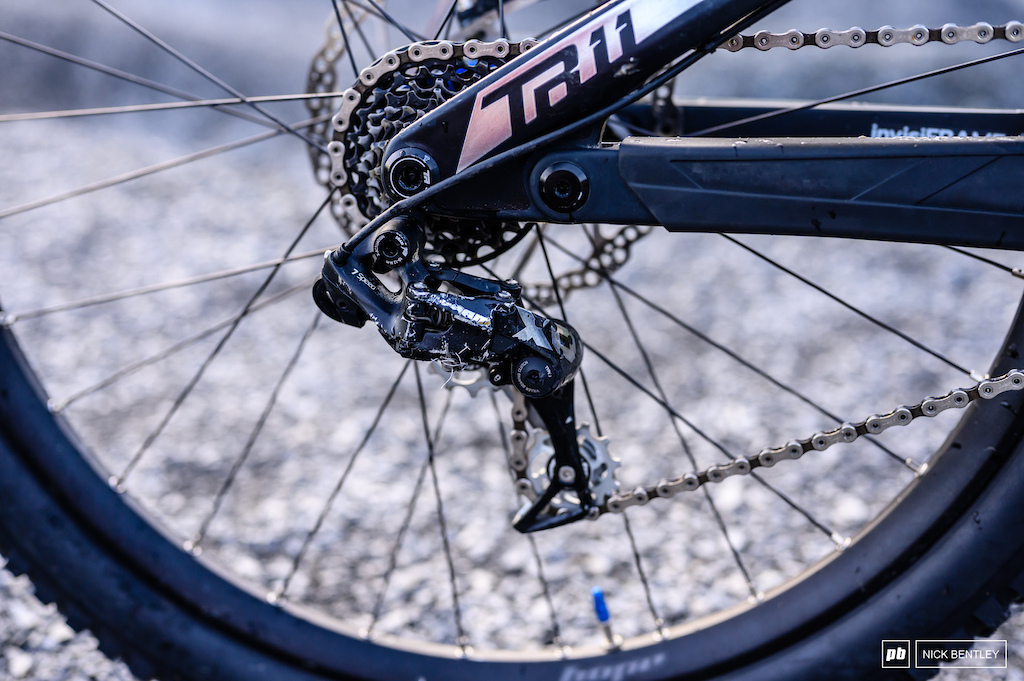 The rest of the drivetrain comes from SRAM with their ever-popular XO1 7 Speed DH groupset. The XO1 Mech looks like it has had a hard life taking plenty of knocks, is treated to a set of Hope jockey wheels. 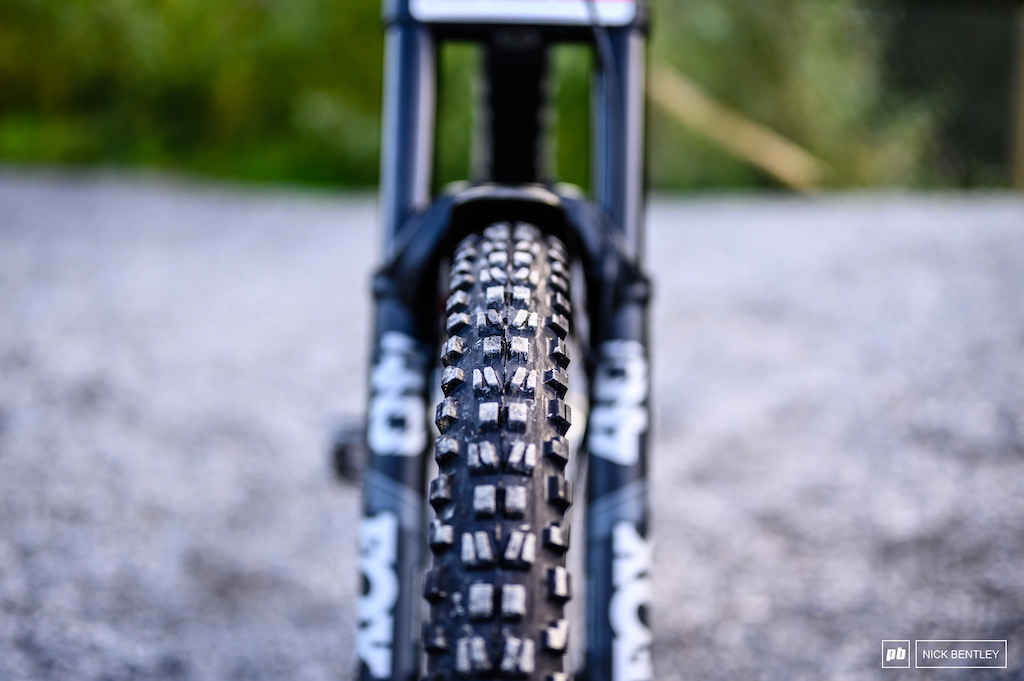 This Transition being set up as a Mullet bike means we have a 29" Hope Fortus 30mm wide aluminium rim on the front of Stacey's bike laced to Hopes Pro 4 Hub. At the rear you find the same set up just with a 27.5" version of the Hope Fortus DH wheel. These are set up tubeless with the Classic Maxxis DHR and DHF tyre combo both in DH casing. 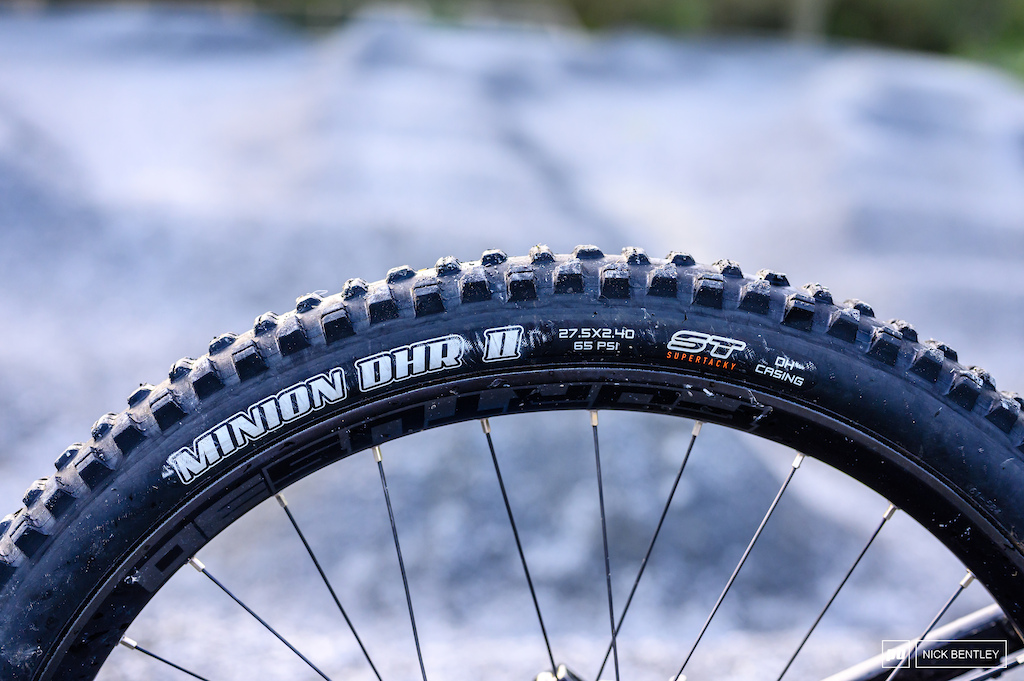 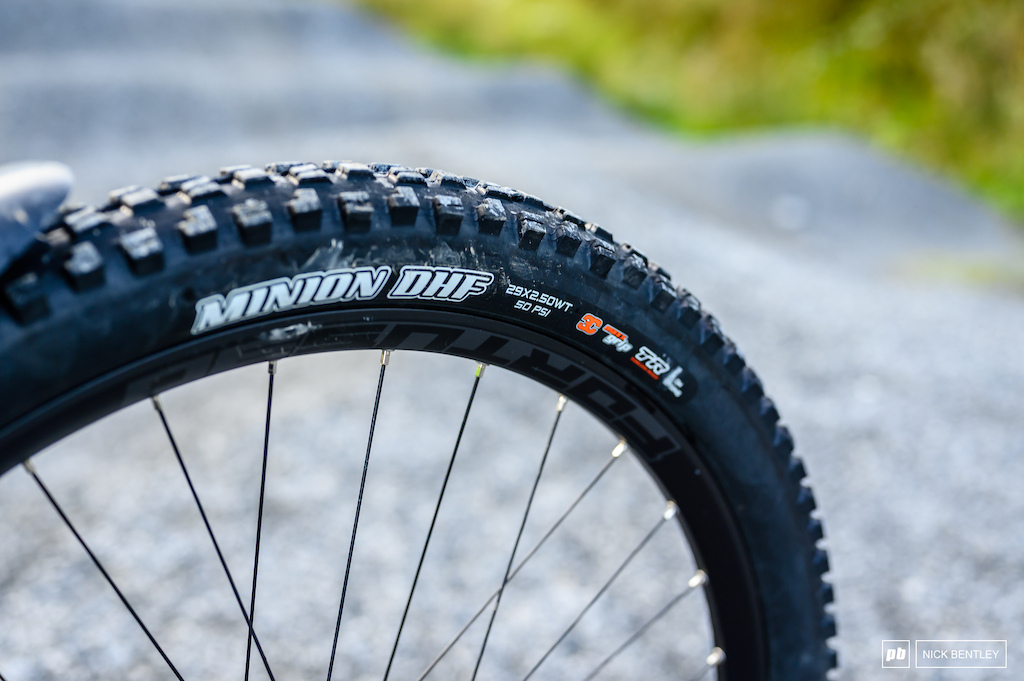 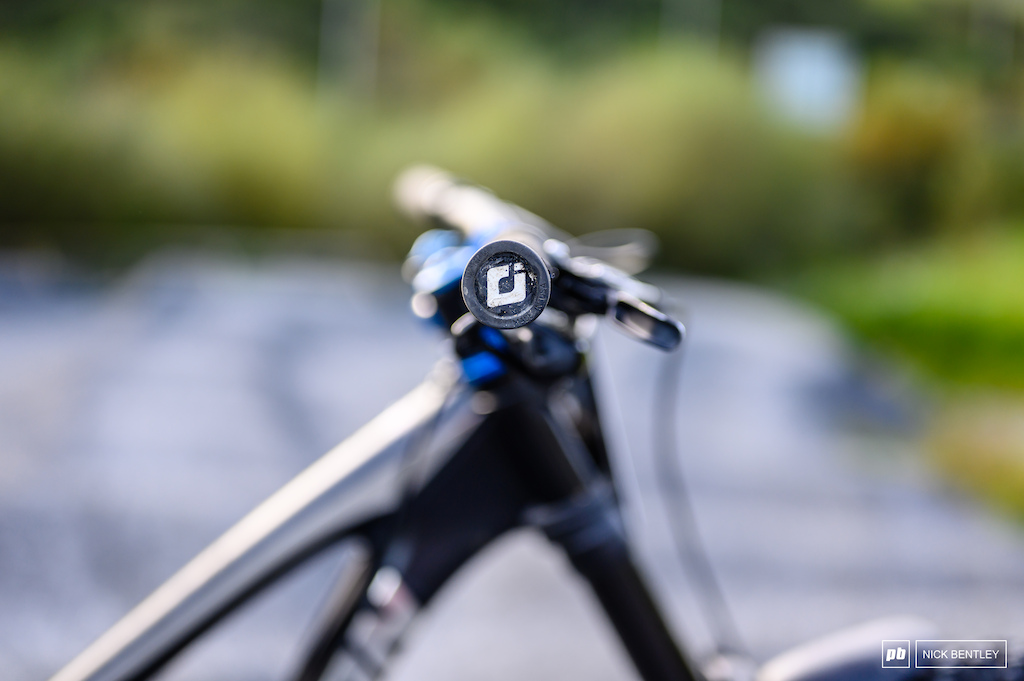 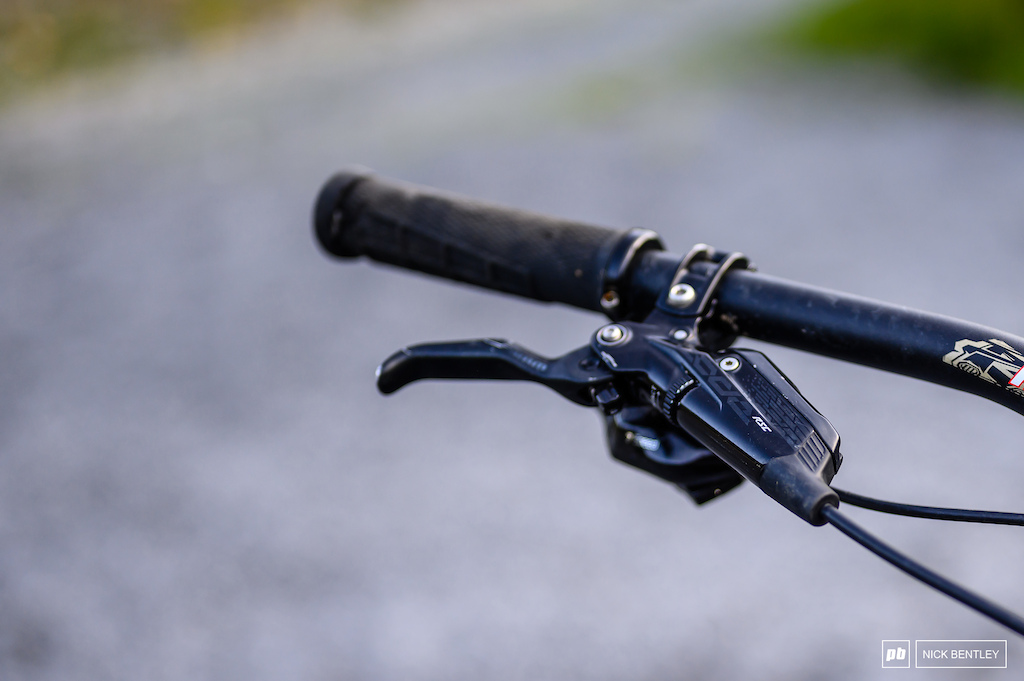 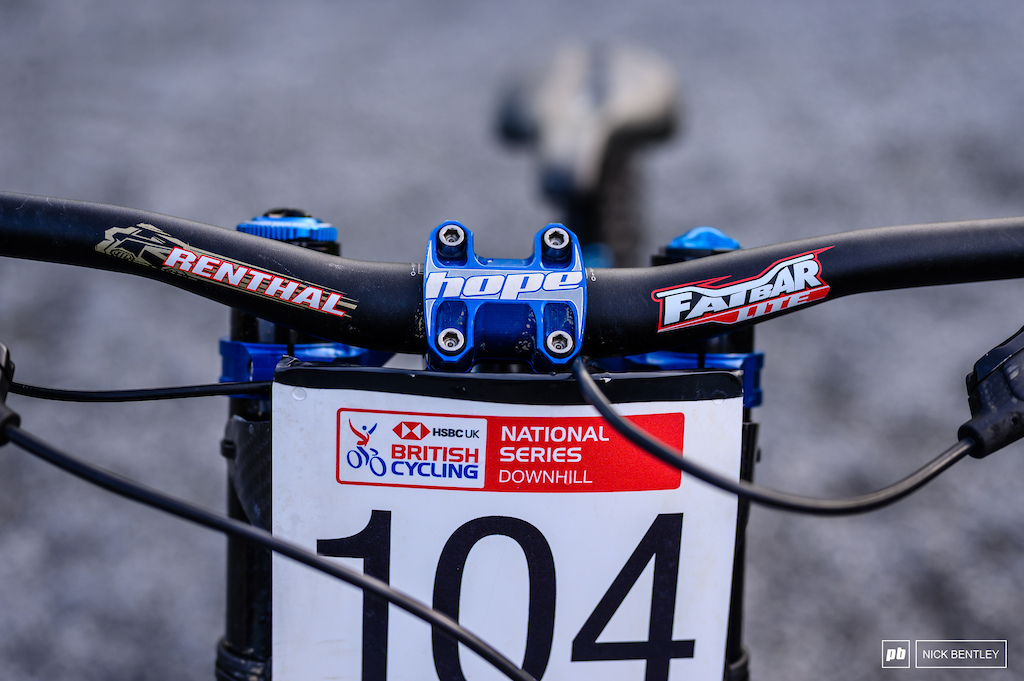 When it comes to handlebars Stacey is running a Renthal Fatbar Lite aluminium handlebar. This bar is 20mm rise and cut to 750mm in width. Grips are taken care of by ODI's Classic Elite Lockons which look like they have had plenty of use. For brakes, Stacey is running SRAM's Code RSC brakes with 200mm rotors front and rear.

Hope also provide Stacey with a little more bling with their classic seatpost clamp and there is even a Hope edition of SDG's Radar saddle. This is set quite low due to Stacey's height. There is a personal touch on the top tube with a Unicorn sticker, something Stacey and her boyfriend have matching tattoos of. 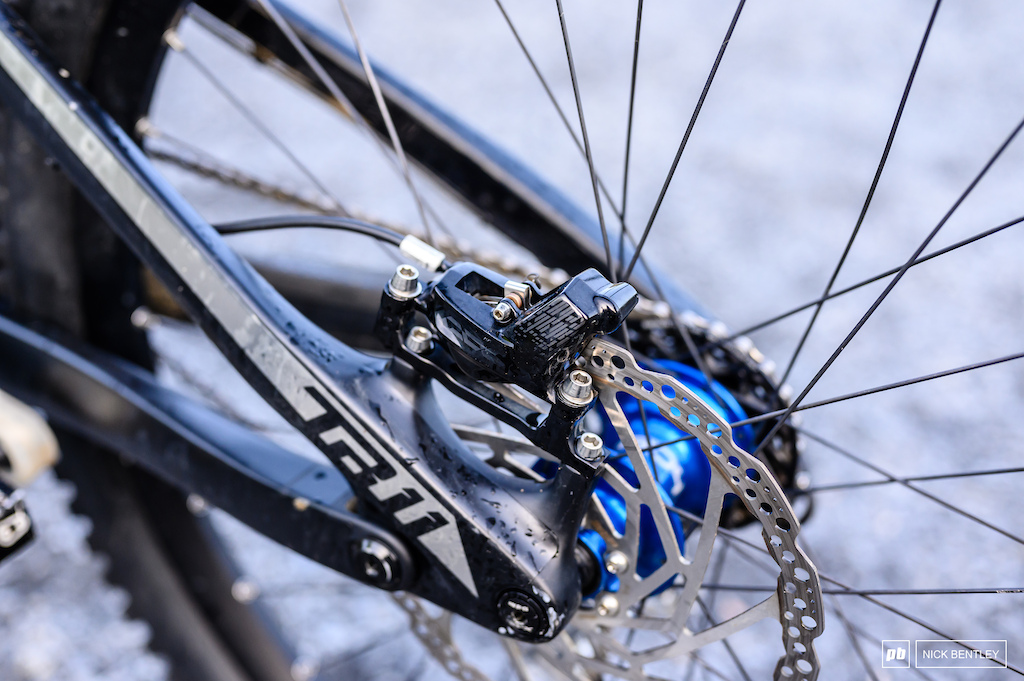 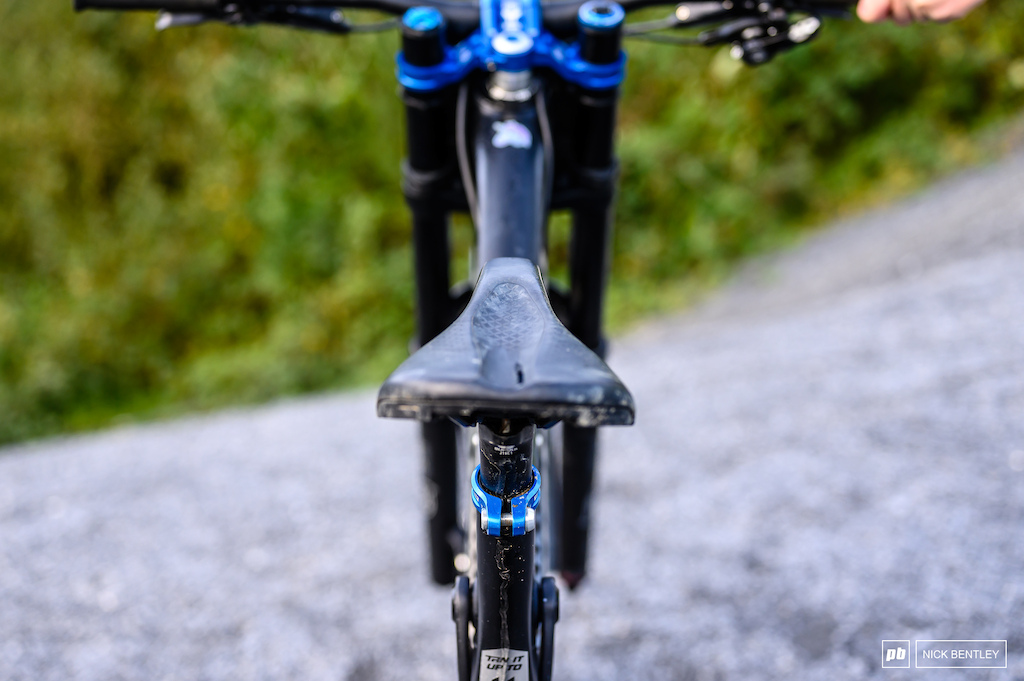 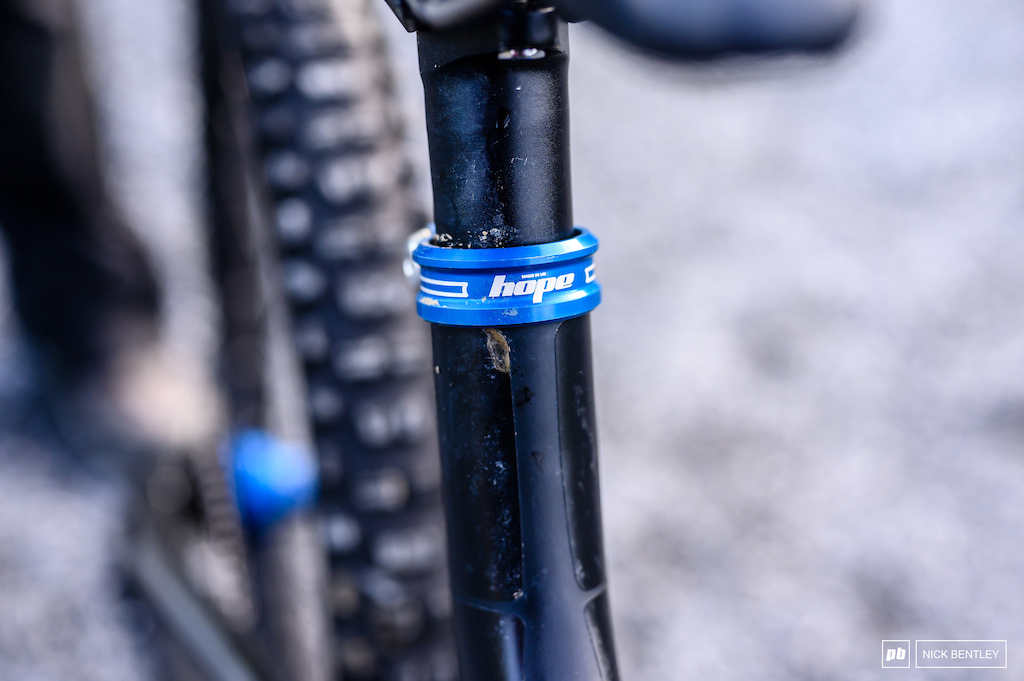 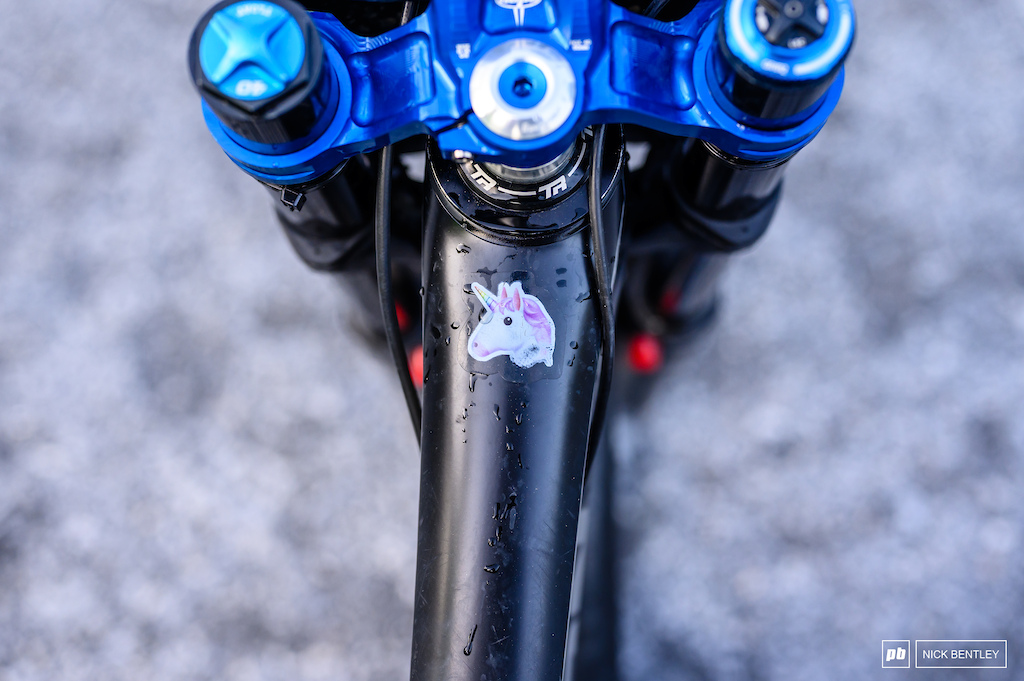 Once the champagne had been sprayed and the trophies had been handed out we managed to catch up with the UK National Downhill Series champion for 2021 Stacey Fisher. Stacey has moved across from motocross in the last few years to riding Downhill.

Congratulations on winning the DH National Series, how are you feeling?

I'm so happy! (At this point Stacey was still hugging her trophy and was finding it hard to speak due to the massive smile on her face)

How has the last year been for you? You and KJ fought all the way to the last rounds

Yeah, I didn't start off very well. I broke my foot pre-season and then when I came back from that, I think it was the week before Round 1 at Hamsterley, I had a really bad crash. I hit a tree and fractured my coccyx so I was in a lot of pain for Hamsterley. But yeah, I was just trying to progress through the year and now this.

How does this compare to winning National Champs, are they the same level?

Yeah, I would have liked that National Champs a little bit more but this is good enough.

You were out at the World Championships at Val di Sole. Are you looking forward to doing some World Cups next year too?

If I can get some financial support, I'm there. I think I’m going to be there anyway. I'll put myself in debt for that. 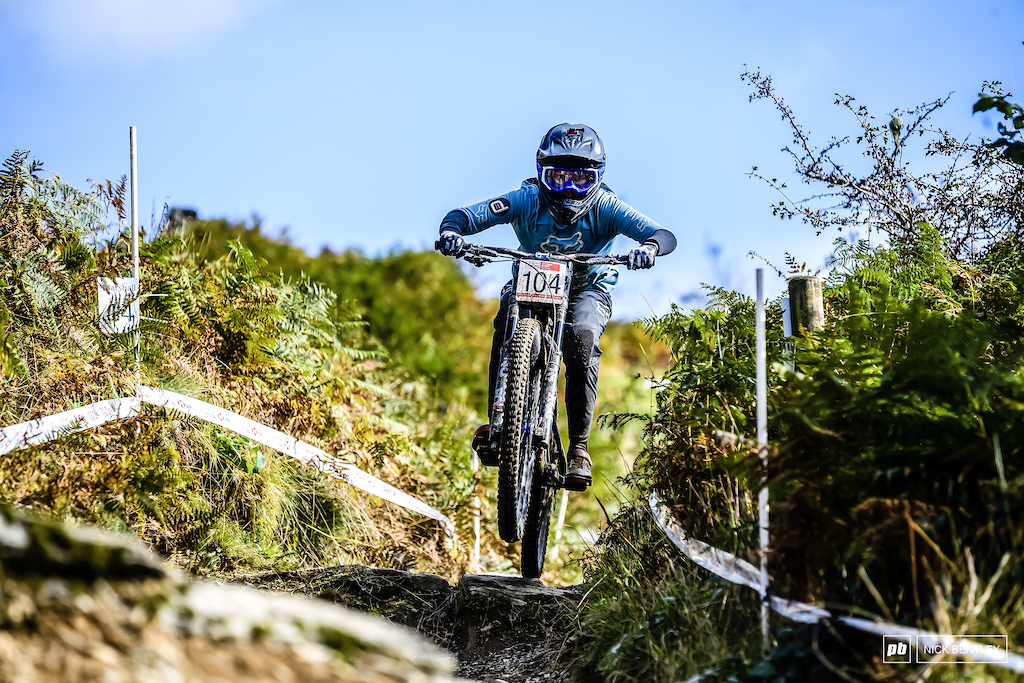 Is that the main thing holding you back from racing World Cups, finding a sponsor that is willing to help fund it?

Yeah, yeah it is actually because nobody needs like a bike with certain components on it, things like that or a certain tyre. The money side of it because of all the covid tests, the cost of travel and everything else that goes with it is the deciding factor as I've got to work out how much it will cost and then put that forward to somebody to see if it is feasible.

It's great to see that the women's category is becoming more competitive again. How fun is it having to fight for results?


Well, it’s fun when I win, I’m joking. It’s actually been a lot of fun. Coming from motocross, achieving what I've done there and coming here, then being in the Elite’s this year, having competition is a little bit new to me. So it's been awesome, but it's really made me think that I need to mentally sort myself out first.

The Women's field, although it is competitive it seems like a bit of a family. How is it?

It’s absolutely amazing. You have riders coming up to you asking how did you do, did you get a clean run and they really hope you did well, genuinely. I didn’t expect that and honestly, it makes it for me. I don’t know it’s strange, the people that are pushing me and beating me - I don't feel any resentment at all and I just think it's because everyone just wants to build each other up and everyone’s nice to each other.

I don’t get to train. I work Monday to Friday, if we get some time I’ll put some training in, work on the bike or we just go and have a blast for an hour or so after work at the local or dig in. In terms of finding the time to get off for races, my company have been quite good with that but obviously, it’s unpaid so it doesn’t really help with the efforts of getting to the Worlds. That’s by the by though and it’s no real issue really.

So next year do you think you will be back racing the National Series again? Any other big plans or sticking with Downhill?

Yeah, I'm being persuaded every day by my Dad and my boyfriend to get back into Motocross but I have zero interest in it at the moment. I love this sport and I’m gutted I didn’t get into it sooner. Literally no plans but Downhill, World Cups and National Champs. Everything bike-related and two wheels I’m interested in.

drfunsocks (Oct 23, 2021 at 1:43)
Surprised she is running sram brakes when sponsored by hope… I know id be running some v4’s if i was sponsored by them and rode downhill.

gravitysgirl (Oct 23, 2021 at 9:49)
depends on if you like a brake that feels wooden or not I suppose. Hope are super powerful but they make my hands ache so no good for me. YMMV

Blablablup123 (Oct 23, 2021 at 13:02)
@gravitysgirl: when have Hope brakes ever been "super powerful"?
Just realized that you wrote that your hands hurt when using Hope brakes. The two might be linked

bengtleon (Oct 23, 2021 at 1:25)
Great interview! I just have a question. Why are suspension settings kept secret? Like in general? I mean, it is not like highly tuned settings will fit other riders? Even if two people weight the same, it’s not like they are going to ride the same?

tonit91 (Oct 23, 2021 at 1:39)
IMO it's meaningless because like you said it's a custom tune. It wouldn't provide any information that you can compare to others.

jaame (Oct 23, 2021 at 12:22)
Why would one want to know someone else’s suspension settings? It’s so personal as to not be applicable to others, and not interesting enough to be a story point on its own.

fitnj (Oct 23, 2021 at 2:31)
would love to find out more about those crowns. What offset? Looks like they were able a true zero rise from a 50mm stem which is hard to do when it's not integrated.

Snowytrail (Oct 23, 2021 at 8:13)
Went to the Hope website to learn more...seems like they are no longer made. A few on E-Bay but they don't appear on any of the big online sellers.

dglobulator (Oct 23, 2021 at 14:37)
I had one maybe 8 years ago but someone nicked the bike. They do indeed look awesome but there's a real lack of adjustment and options with the stem being attached directly to the crown

" we didn't come to take part, we came to take over " Conor McGregor

danstonQ (Oct 23, 2021 at 2:46)
Hope components are great and nice looking as always, just a pity that they don't produce handlebars (and why BTW?)

Crankhed (Oct 23, 2021 at 4:59)
They produce handlebars ,you’ll only need one handle/grip and one crank though
As they cost an arm and leg
But they do sell really nice carbon handlebars and some sweet frames too

dirtpedaler (Oct 23, 2021 at 10:22)
ST existed long before Maxxgrip, they are still listed on the website in DH and EXO but not available when you add to cart. Actually bought some ST EXO DHF 26's last year.

There's some other expensive compensation you can do with the headset cups too. But it's an expensive way to go mullet these days.

DirkMcClerkin (Oct 23, 2021 at 10:46)
If you get a laugh out of seeing a pair of Mallet's, the pits at a DH or Enduro race would be the funniest place you've ever seen. The most common race pedal

SPD is shimano. Calling a CB pedal an "SPD" is like saying you're riding a Santa Cruz StumpJumper.

Lord I get sassy from some good CNC.
Below threshold threads are hidden

pcloadletter (Oct 23, 2021 at 7:48)
That fork setup looks dangerous. At full compression, it looks like the fender/tire would hit the downtube.