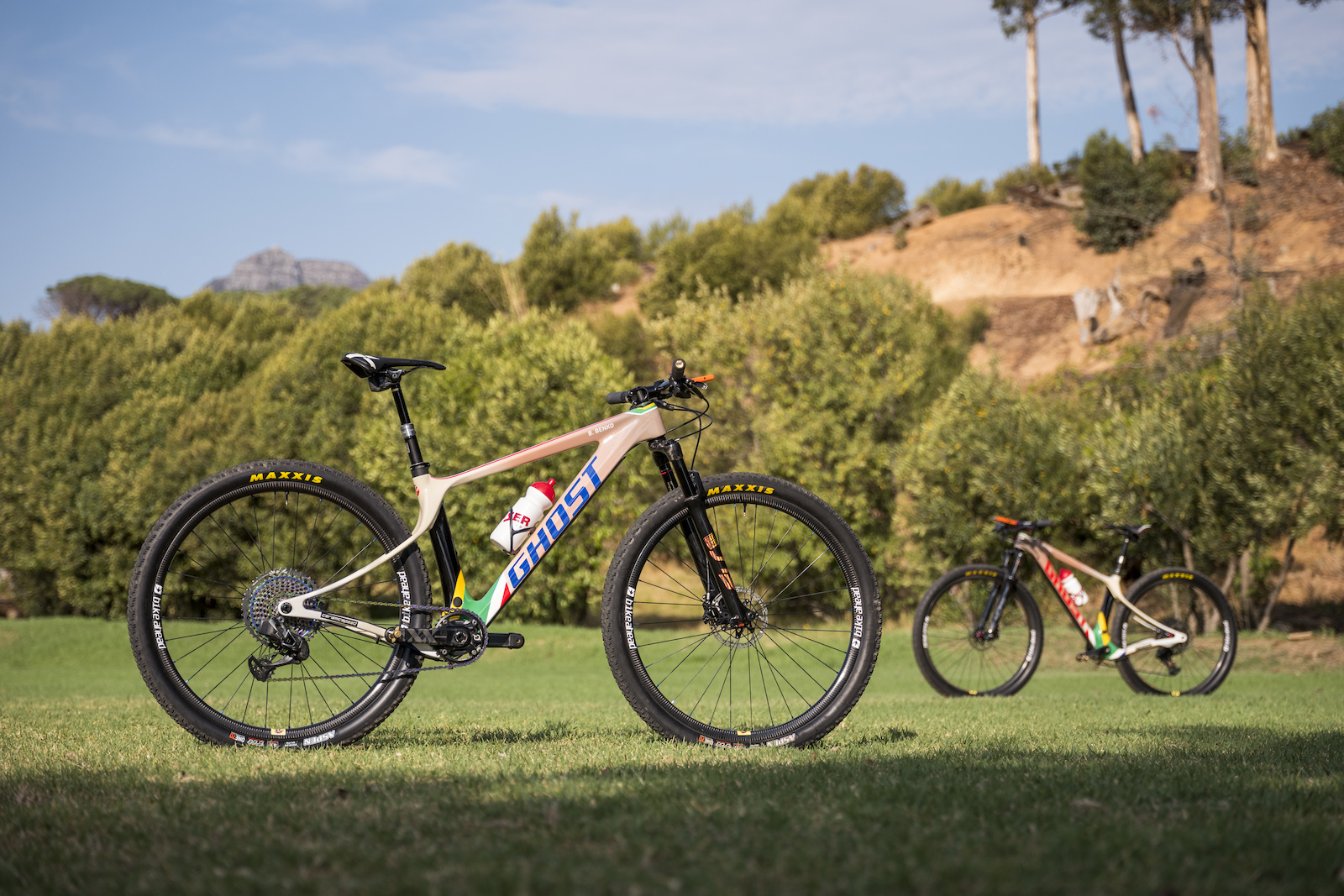 BIKE CHECK
Barbara Benko's
Ghost Lector SF Pro
Photography by Andreas Dobslaff
The Tankwha Trek is a stage race in South Africa, and the Ghost Factory Racing team were using it this year as a warm-up for the Cape Epic later in the month. In 2019, Hungarian champion Barbara Benko and her teammate Anne Terpstra won the first two stages of the Tankwha as the only competitors on hardtails, but slipped to third as Benko got ill halfway through the race. This year they were back looking for revenge and to help them get back to the top spot, Ghost commissioned these two custom painted Ghost Lector SF Pro bikes.

Unfortunately, bad luck struck the pair again. Firstly, these custom painted bikes (ironically) got stuck in customs so weren't ready for the race start and Barbara also got sick again. Anne was able to race for the rest of the stages, but she had to start 15 minutes behind the rest of the field each day. She still got the fastest time of the race but it did not count as a winning result as she was not racing with the main field. 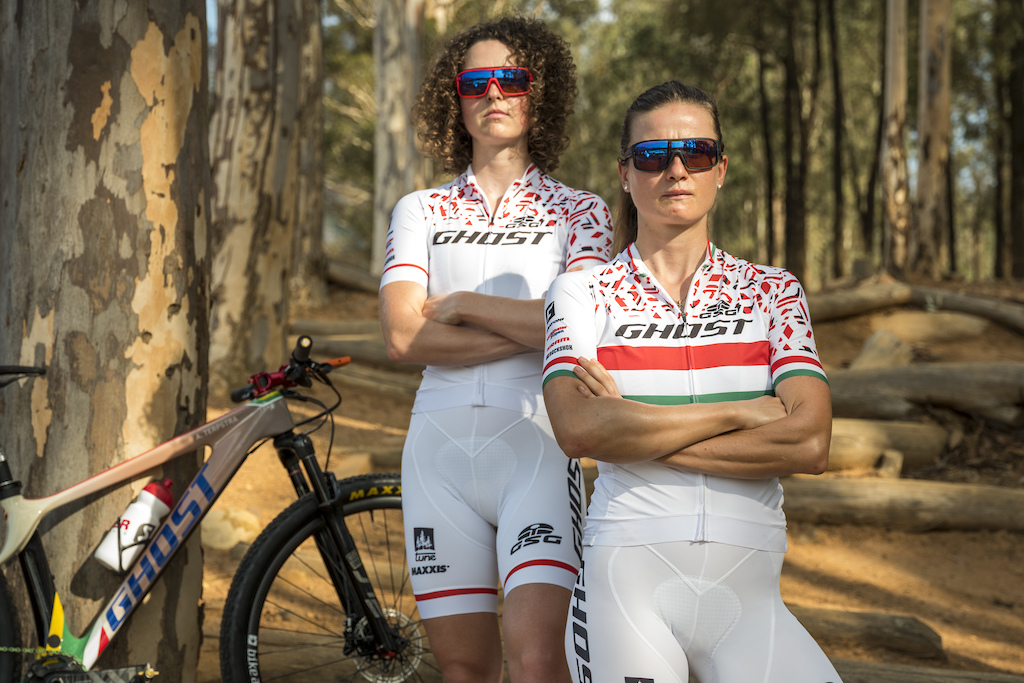 Rider Name // Barbara Benko
Age: 30
Hometown: Budapest
Height: 174cm, 5'8"
Weight: 64kg, 141 lbs
Instagram: @benkobarbi
In short, these two hardtails will never really get to show us what they could have done, so rather than let them go to waste we thought we'd take a look a bit closer at the key features of these sweet looking rides.

Here's an interesting fact before we get into the details - Ghost Factory Racing weren't actually planning on using these two bikes for the Cape Epic, despite them already having South African livery. Instead, they had another surprise up their sleeve that they now can't show us. We'll make sure to have a good look around their pits when racing resumes to work out exactly what they meant by that. 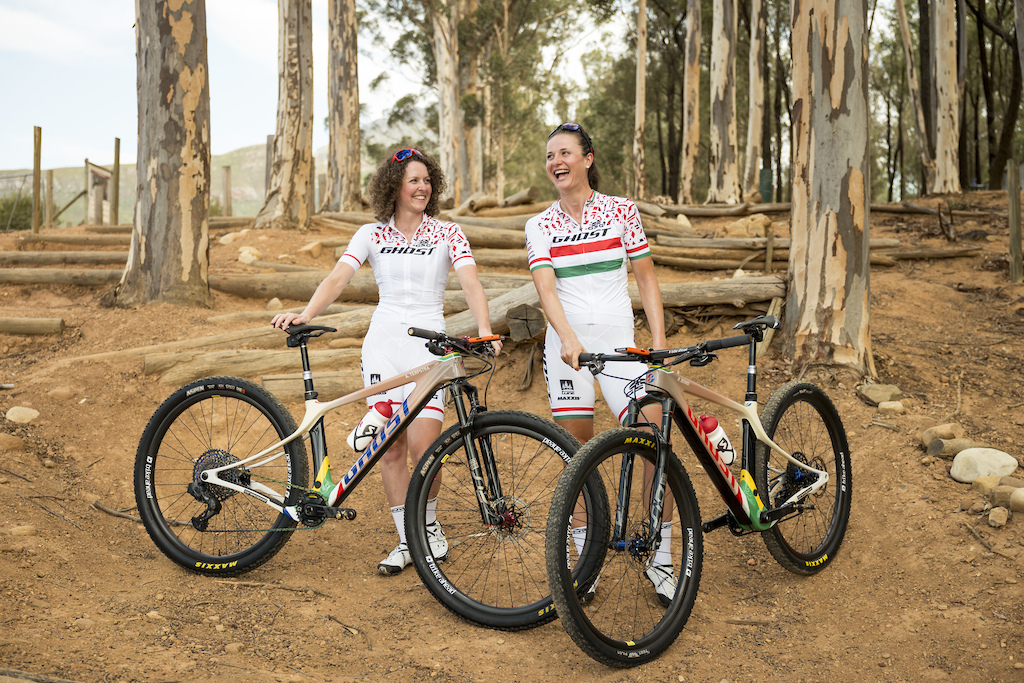 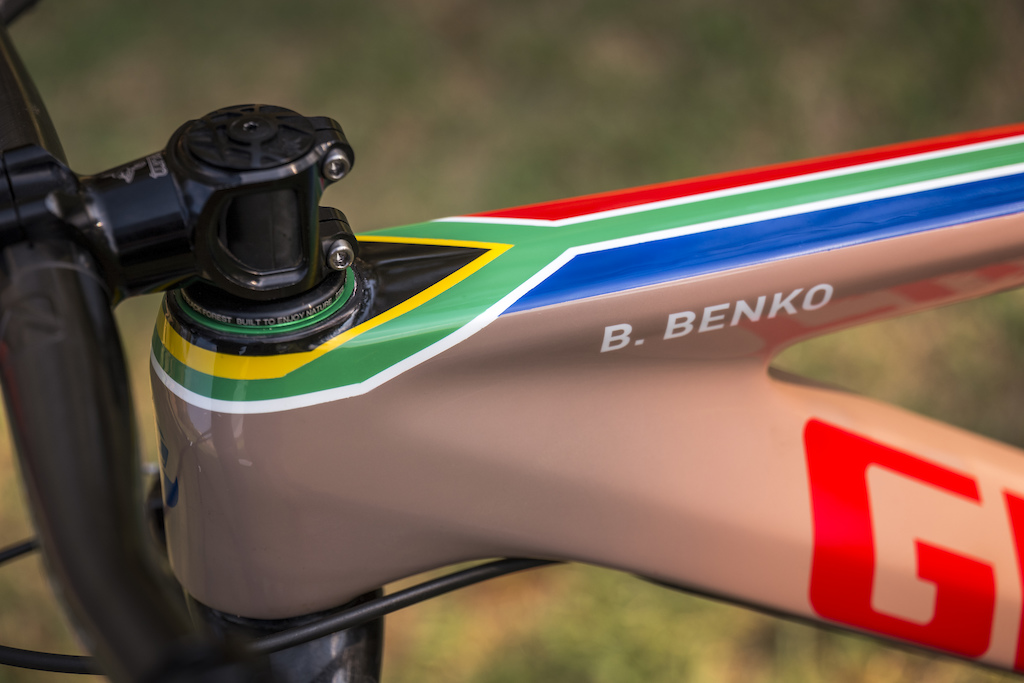 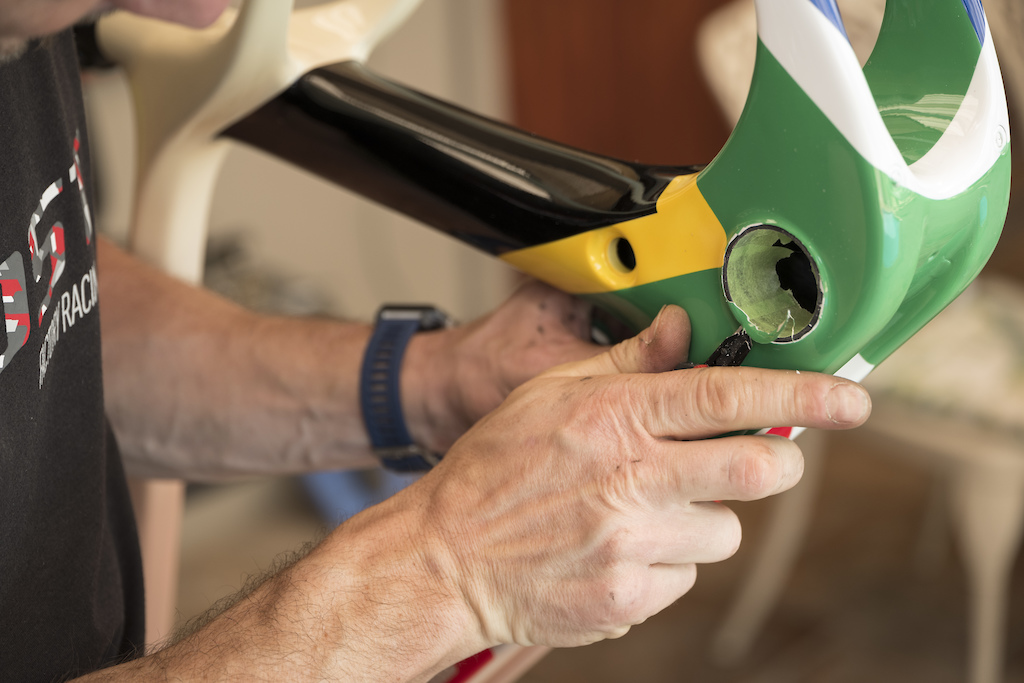 The bikes arrived so fresh into South Africa that the masking tape protecting the bottom bracket area had to be cut away before they could be built up. 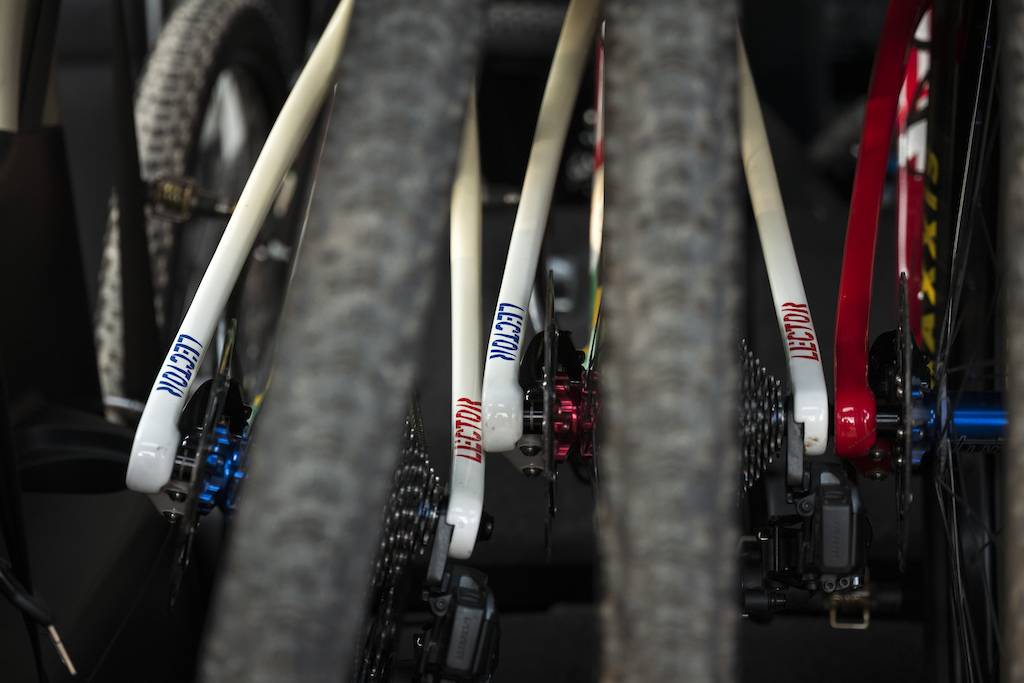 The thin, curved rear stays of the Lector hardtails are inspired by leaf springs and are designed to minimize vibrations to increase comfort and traction. 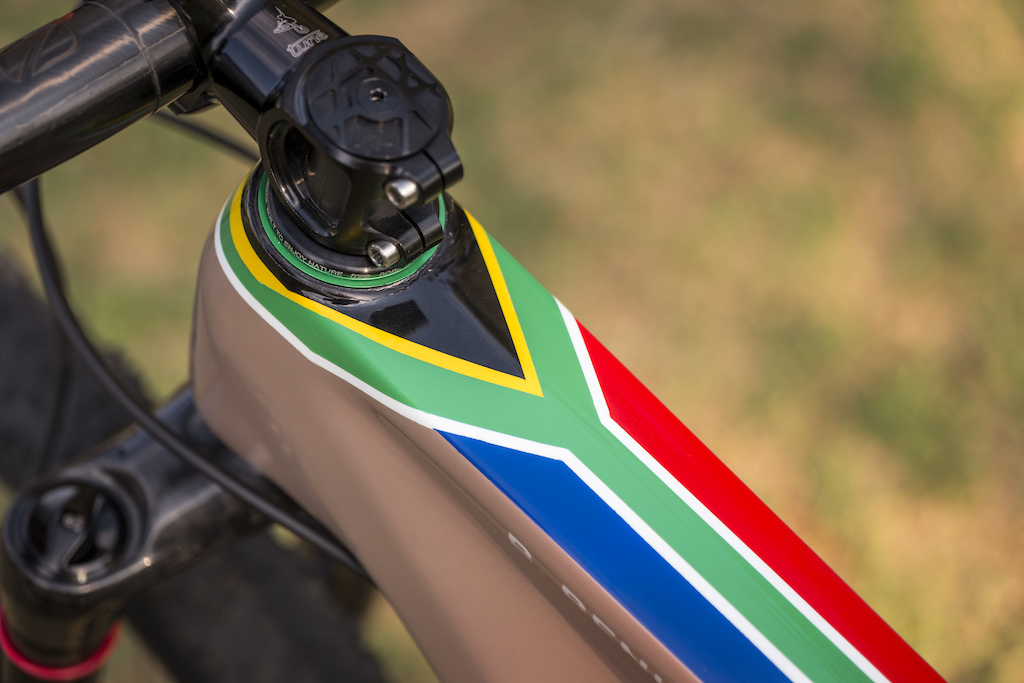 South African flag details celebrate this bike's debut race - the Tankwha Trek. The South African flag is one of only three national flags in the world to have six colours, the others being Portugal and Paraguay... yes, I've been doing a lot of Zoom quizzes in lockdown 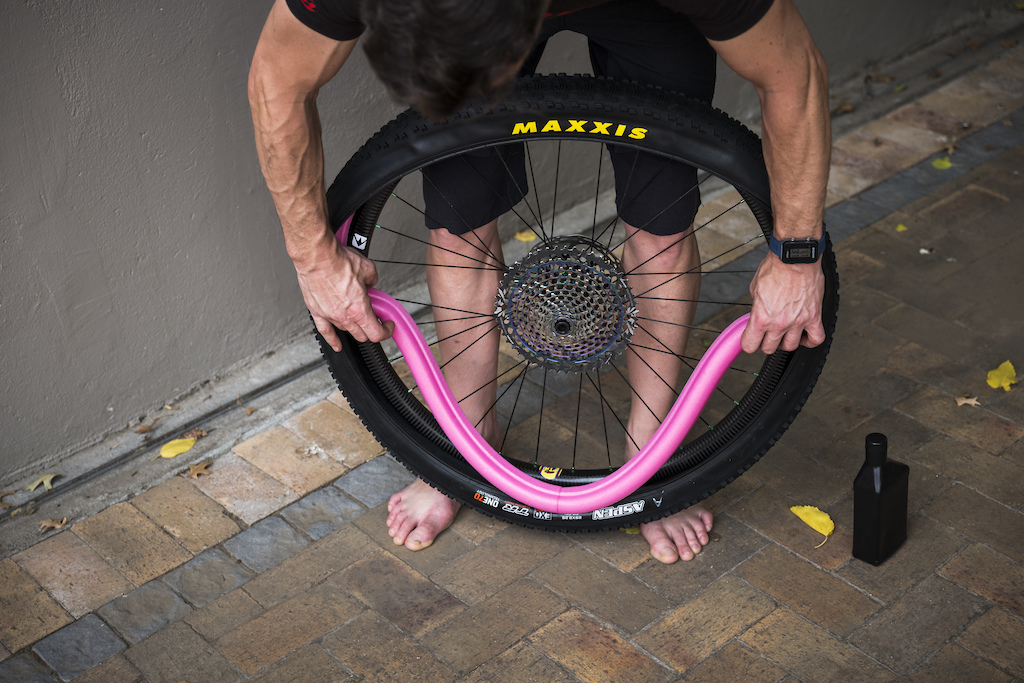 Tire inserts aren't just for downhill and enduro riders anymore. Pepi's R-Evolution inserts have a claimed weight of under 80 grams and offer a more lightweight option to provide your rims with protection. Benko runs hers with 1.4 bar (20 psi) in the front and 1.6 (23 psi) in the rear. 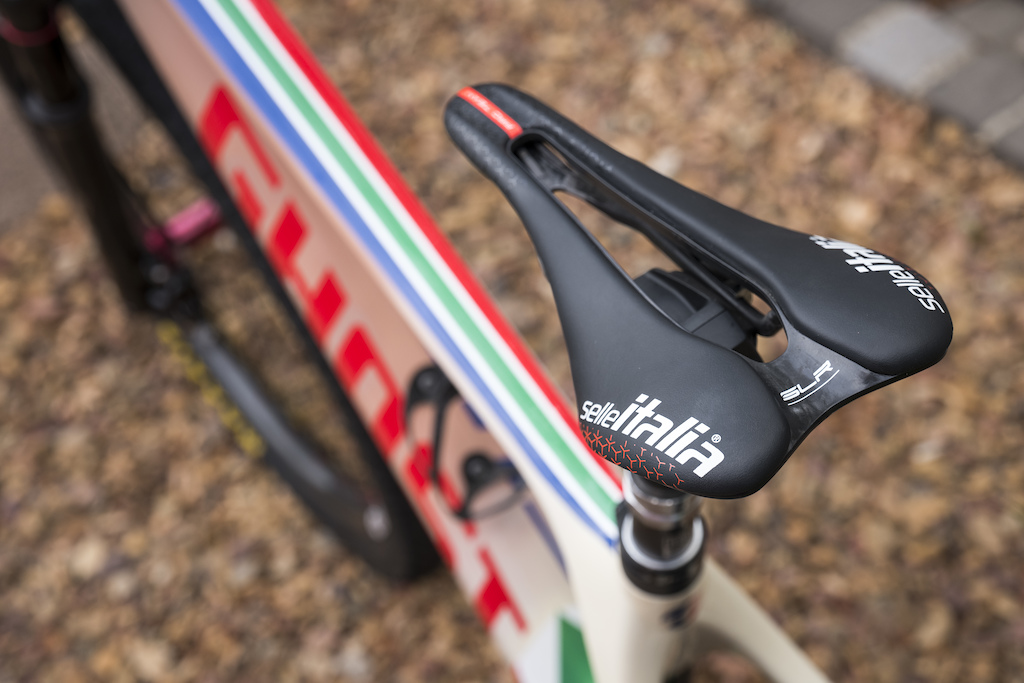 This Selle Italia SLR Boost Superflow Pro Team has been designed with World Tour teams and is for athletes only at the moment. We don't have many details of it yet but it's probably safe to assume it's very, very light. 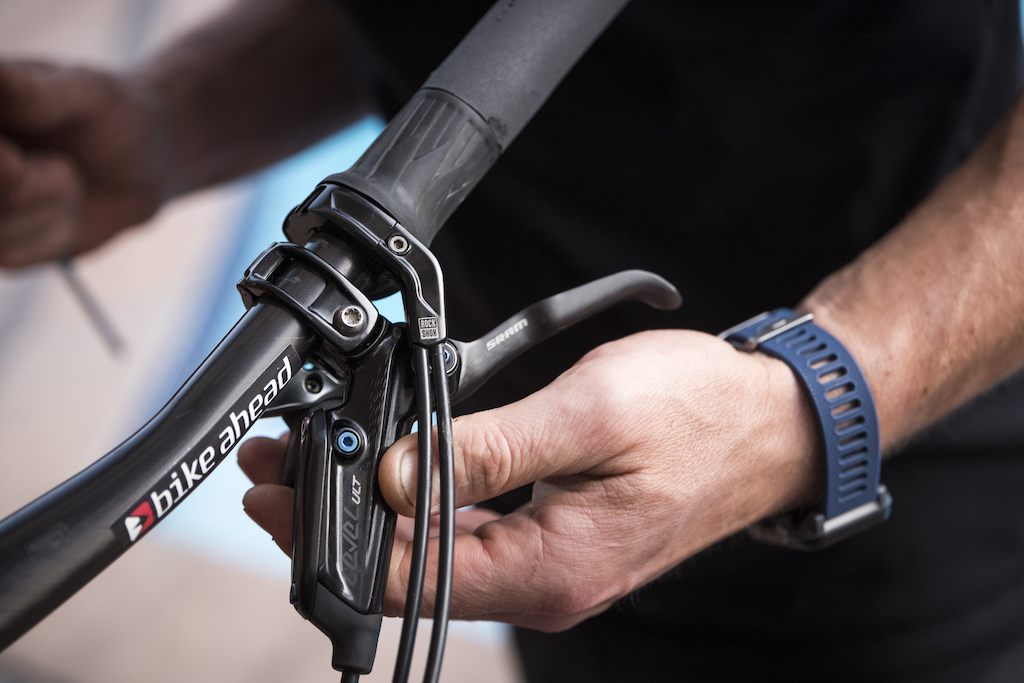 A TwistLoc allows for the 100mm travel RockShox SID to be locked out from the bars. The team still had the old SID on the Lector as the new fork hadn't yet been released as these were being built up. 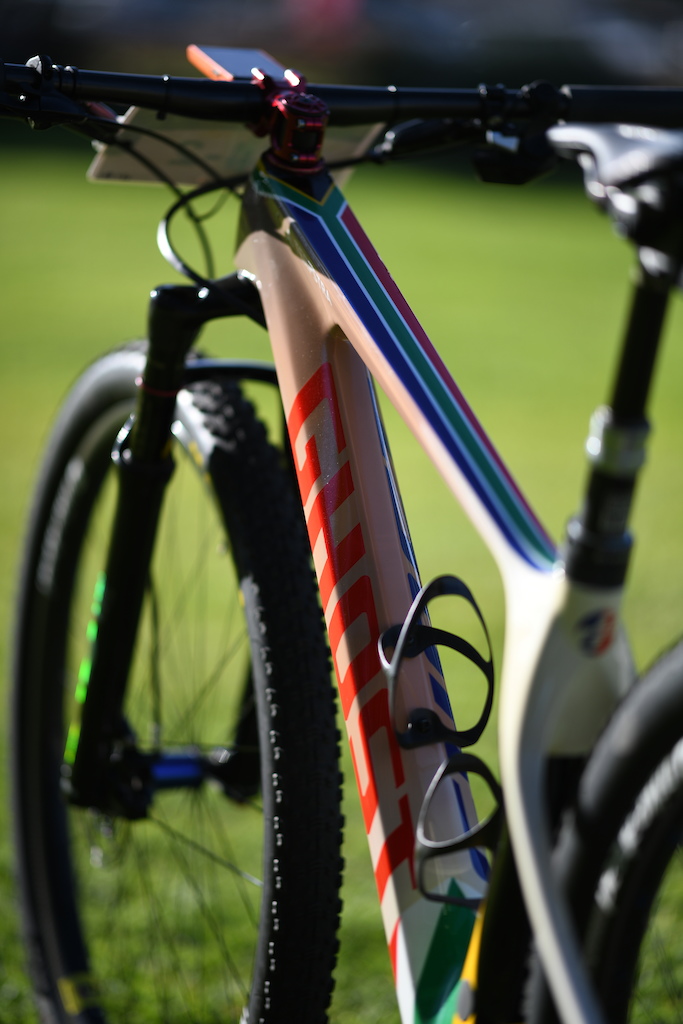 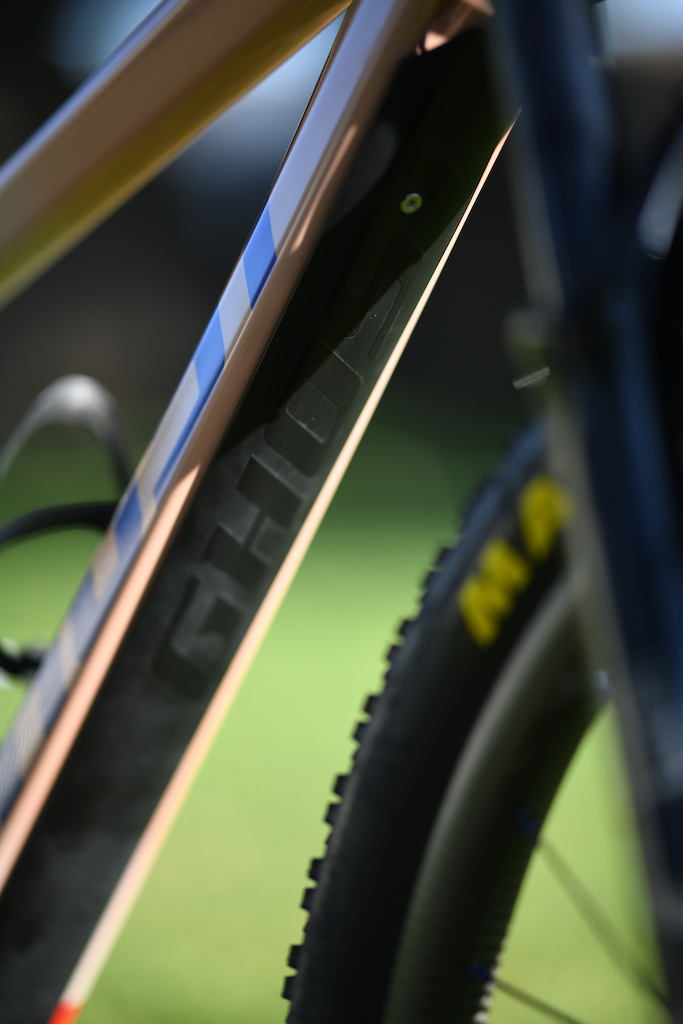 The rear brake cable is hidden underneath this removable downtube protector, which should make life a bit easier for mechanics than full internal routing. Photos: Zoon Cronje 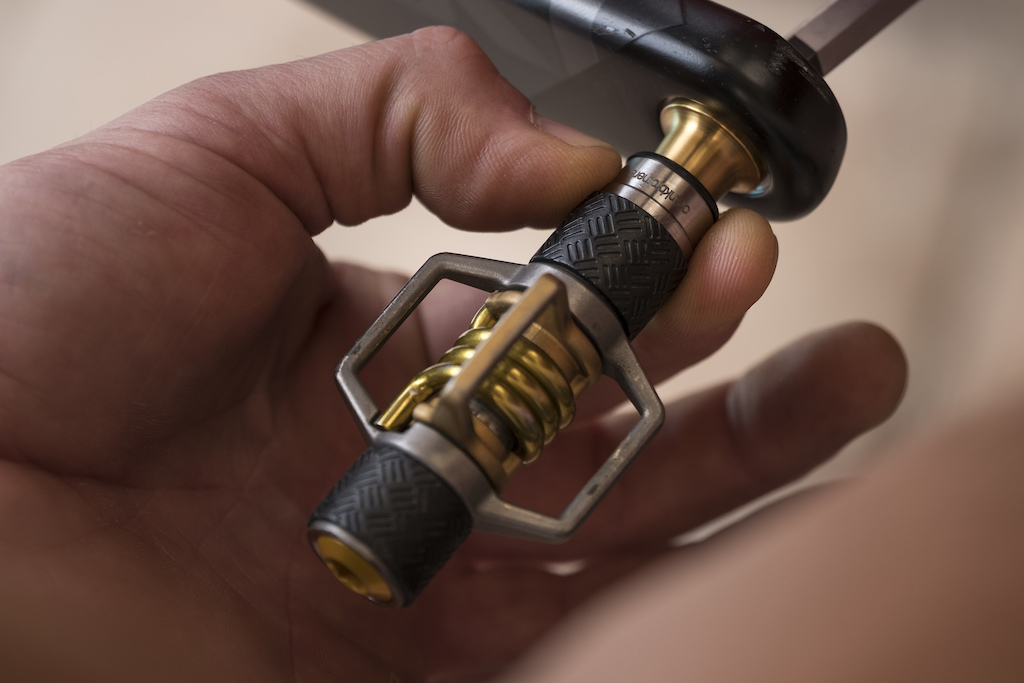 Crankbrothers' Eggbeater pedals are about as low-profile as you can get. 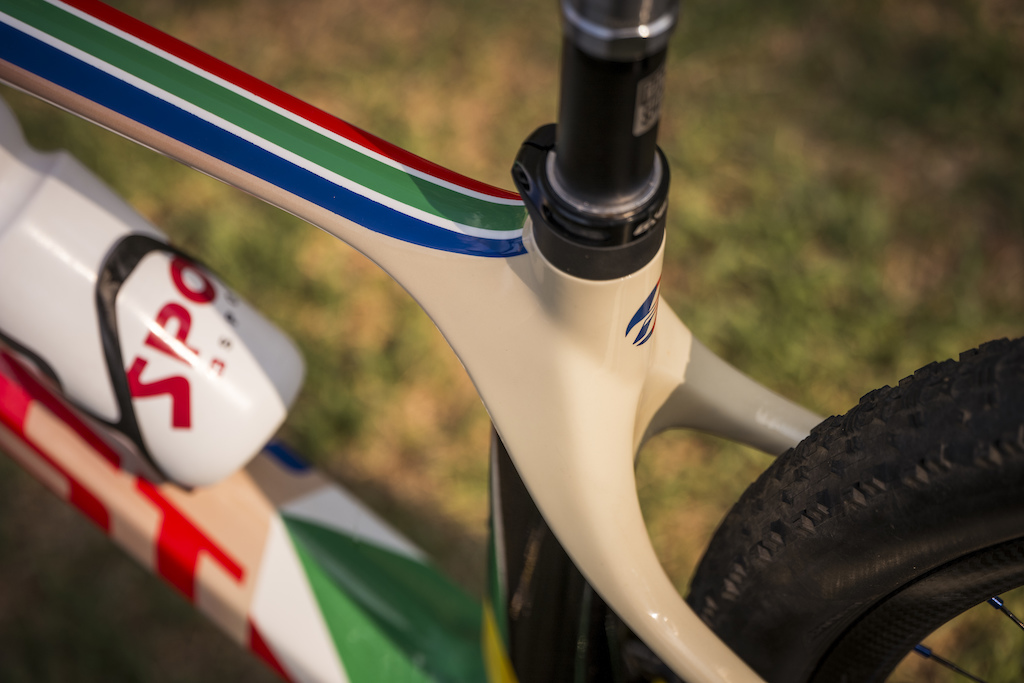 Benko and her teammate Anne Terpstra were trying to prove that the Tankwha Trek could be won on hardtails but bad luck and illness dented their chances this year. 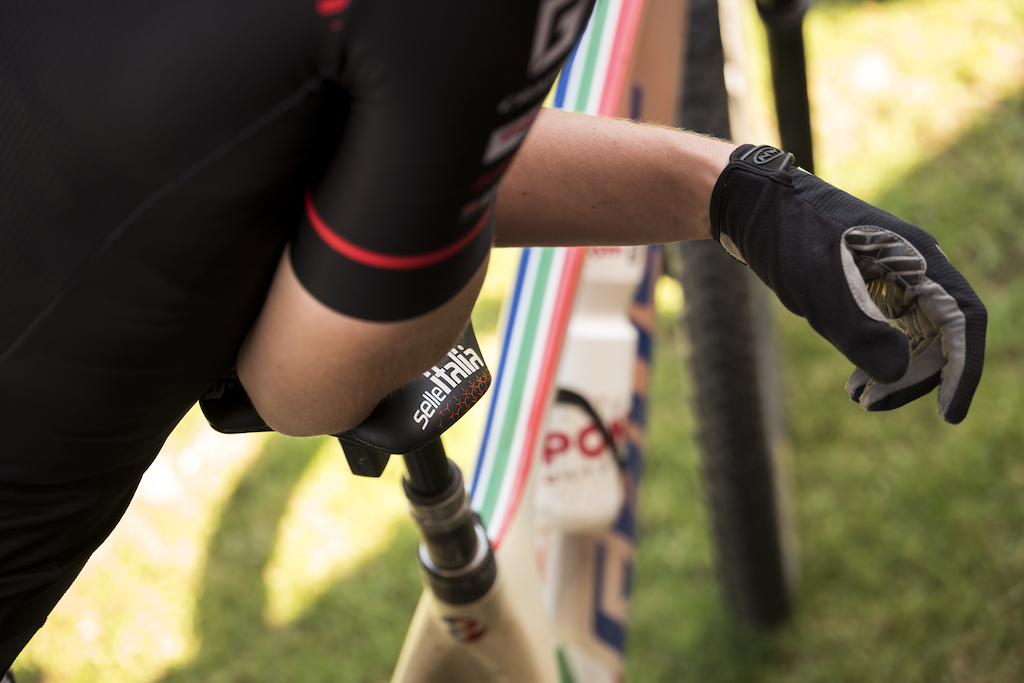 Only 100mm of travel needed on this AXS dropper for Benko.

Tweet
Must Read This Week
Interview: Trek's Travis Brown On Experimenting With 32" & 36" Wheels
85866 views
First Ride: Cannondale's All-New Scalpel SE
72346 views
Ridden & Rated: 4 of the Best eMTB Motor Systems for 2020 - Bosch vs Brose vs Shimano vs Fazua
61691 views
Pinkbike Poll: If You Had to Ride One Bike for the Rest of Your Life, What Would It Be?
53420 views
Video: Conflict Arises Between 17 Year Old UK Rider & Apparent "Trail Saboteurs"
52225 views
First Look: ShockTune is a Free Suspension Setup App
46517 views
Video: Claudio Caluori Tries to Keep up With Nino Schurter on his Home Trails
45425 views
Bike Check: Ben Cathro's Santa Cruz V10
35567 views

RowdyAirTime (Apr 23, 2020 at 13:12)
I think Jason is still sore from the last huck to flat test! Even with all the fancy bright colours, this bike still looks stealthy, I almost thought I saw a ghost...

jordanaustino (Apr 23, 2020 at 12:06)
Really like the long running protection/cable guide idea. The nice looks of internal routing, most of the simplicity of external, and more downtube protection.

krashDH85 (Apr 23, 2020 at 12:15)
Agree here. Could definitely see this concept making it's way into other disciplines. I don't mind internal routing on most things but internal rear brake routing irks me.

carlosldegonzalez (Apr 23, 2020 at 12:22)
Canyon does it as well and I think we all agree that it is an incredible idea to avoid internal cable routing.

look-out (Apr 23, 2020 at 13:53)
Totally agree. There's no real benefit of internal routing, when this idea is simply supreme in terms of simplicity and minimum of maintenance. I look forward to more companies revert to it and quitting problematic and troublesome internal routing.

tacklingdummy (Apr 23, 2020 at 14:57)
Yeah. I'd like to see it used in other frame manufacturers. More protection and ease of maintenance.

mtbgeartech (Apr 24, 2020 at 3:06)
Came here to say the same thing. Heck, I'd love to just see external routing in most cases. Ride, rinse, wrench. I'm over internal routing. This downtube thing is a phenomenal idea though. Replaceable DT cover that protects the frame and hides the cables for pretty IG photos. Run the dropper cable in there too and do external routing to the rear brake and derailleur!

Aksel31 (Apr 24, 2020 at 11:01)
Yep I have it on my spectral and recently changed my brakes... God knows how much time I have saved compared to a classic internal cable routing (deinstallation, installation + bleeds) !

Ocelotank (Apr 24, 2020 at 7:16)
Noticed that too... I think its a photo from another bike. They probably forgot to take a picture but wanted one in the article. If you count the cables, there's one missing from the twistloc side.

yupstate (Apr 23, 2020 at 18:11)
What I find really interesting is how close male and female pro cyclists are in weight...at least XC. Maybe because there's so much cardio the body is fizzled down to just lean muscle, not alot of mass, so there's less difference in weight compared to "average Joe" and "average Jane" weights or even comparable pros in other sports. I see her weight above and I saw another article about the average body weight of pro male/female cyclists and they were very close. Why do I feel like this comment will get downvoted?

pourquois-pas (Apr 24, 2020 at 4:47)
I think it is an interesting observation and would be curious to know if there are facts behind it.

JSTootell (Apr 24, 2020 at 11:47)
Males will likely have a little more muscle mass, females slightly more body fat. But I would be the weight difference ir probably pretty small at equal heights. As a reference, I am 5'8", currently have about the same body fat as an elite level woman would likely have, and have a similar level of power as an elite woman. If I bulked up a few more pounds and dropped a few pounds of fat (I am normally about 5 pounds lighter in race season), I would be closer to Nino in weight (which is only hypothetical, not saying I could).

Ajorda (Apr 23, 2020 at 12:27)
I'm a bit lost here, could someone explain to me the difference in soft-tail vs hardtail? Does it just mean some sort of flexiness in the rear chain and seatstays?

MTB314 (Apr 23, 2020 at 12:38)
@Ajorda I'm pretty sure a hardtail is what most companies make today, eg Giant XTC, Specialized Epic Hardtail, etc with nothing besides carbon fiber layup providing comfort. A soft-tail is one with an elastomer providing some sort of shock absorption like the Trek Procaliber and a bunch of old bikes. Hopes this helps

Bustacrimes (Apr 24, 2020 at 4:58)
This isnt a softail in the sense of TREK´s Supercaliber - they´re using the word incorrectly.

hamncheez (Apr 24, 2020 at 13:14)
In all seriousness, what most people mean when they say "softail" is a bike with minimal pivots (no main pivot), but still rear suspension travel by relying on chainstay vertical flex. The Salsa Dos Niner is a perfect example:

Its not just a compliant rear triangle with no shock/damper. Another good example is the older Cannondale Scalpel that had no main pivot.

The BMC Teamelite kinda blurs this line, but I'd still consider it and this Ghost as hard tails, not true soft tails.

Feideaux (Apr 23, 2020 at 14:37)
Gorgeous aren't they? Looks a lot like the Ironbark gum (Eucalyptus Sideroxylon) we have in Australia.

stuie321 (Apr 23, 2020 at 16:59)
@Feideaux: they are in fact from Australia. They are invasive and considered a big threat to local species as well as the water supply.

DeeWheelson (Apr 23, 2020 at 17:27)
@Feideaux: Ironbarks have a dark coloured very rough bark, they look more like a forest red gum to me

hardtailparty (Apr 23, 2020 at 18:04)
There's some seriously cool technology here. I love the concepts behind these bikes. I think carbon is the future for hardtails. We'll figure out how to engineer them to be light, stiff under pedalling, and soft/compliant on the bumps. I'd love to try a trail version of something like this. I love the removable downtube/cable cover idea as well. Bravo Ghost.

JSTootell (Apr 24, 2020 at 11:49)
I demo'ed a BMC soft tail a while back. Just that hint of flex was amazing for traction in the rough, without any of the weight penalty. I prefer to race HT in XC still.

davidccoleman (Apr 23, 2020 at 13:35)
Surprised the tire pressures are that high. With the prior generation PTN raceline I dropped 4psi front and rear from my normal pressures. I'm over 180# kitted up these days and I'm at lower pressures with inserts than they list here, regardless of what gauge I'm using.

Someoldfart (Apr 23, 2020 at 21:16)
They are running 2.25 wide tires. A person needs a bit more for skinny tires. But yeah, that sounded way too high to me considering inserts and xc racers tend to be really light. I’m about the same weight as Benko but I run 2.5 EXO or tougher casings and run 16 - 18 psi.

JSTootell (Apr 24, 2020 at 11:55)
They are probably railing through turns much harder than you imagine, lower pressure just wallows through corners.

Feideaux (Apr 23, 2020 at 14:39)
I'm quite the fan of how Barbara Benko races XC. Aggressive, attacking, backs herself. Also takes no shit in interviews.

nattyd (Apr 23, 2020 at 16:30)
Self-reply - Looks like the geometry is up on their website.Confusing that they have a Lector and Lector SF model. Super long and slack at 441 mm reach in a small and 68° headtube. XC bikes have come a long way!

bridgermurray (Apr 23, 2020 at 15:18)
This frame looks promising, an ultra compliant hardtail with pretty slack geo... from basically an REI brand. Would like to see more of it though.

bman33 (Apr 23, 2020 at 12:38)
Custom paint, meant for one or maybe a small number of races, pro only and most likely will be a wall hanger afterwards. Not meant for mass production /long life.