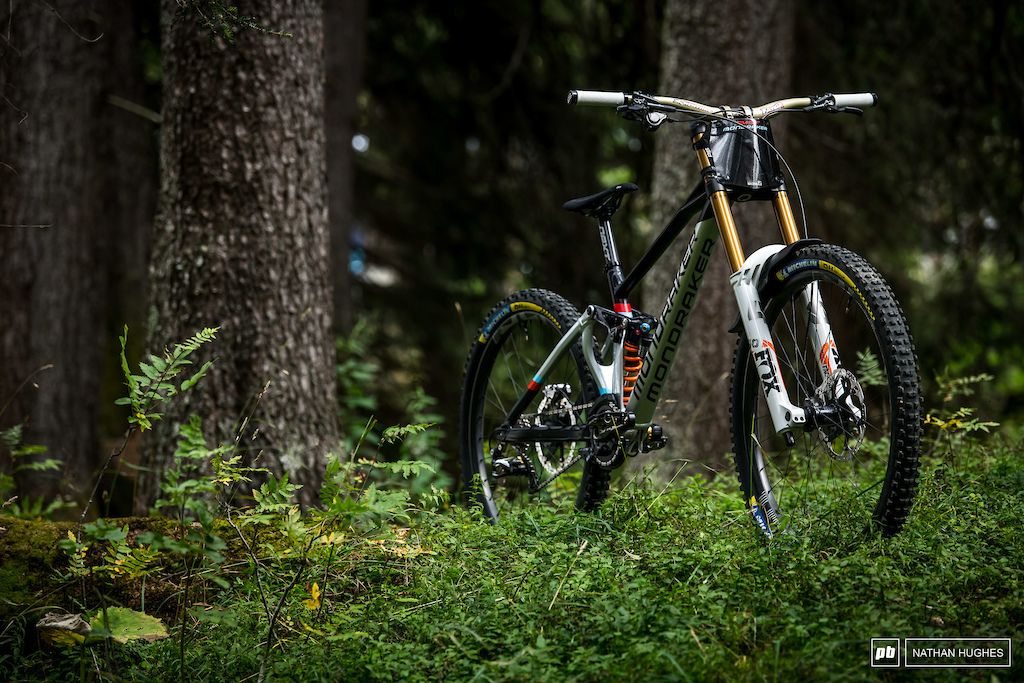 BIKE CHECK
Brook Macdonald's
Mondraker Summum
Photography by Nathan Hughes
After his horrific injury at World Champs last year, there were times when it was feared Brook Macdonald might not even ride a bike again. Feeding off his determination to get riding again, he's dedicated his life to recovery and just over a year after breaking his back, Brook will be back racing again at Crankworx this week and then will be thrust into the World Champs arena next week in Leogang

Mondraker released this new version of the Summum at the start of September, but it shouldn't actually be that new to Brook. We first spotted him testing on an aluminum prototype of the bike in Lenzerheide last year and then we saw further team testing on the frame in Lousa over the winter too. When the bike was finally revealed, it was not a huge overhaul from Brook's previous bike but it was now aluminum only and redesigned around 29" wheels.

With his season disrupted by recovery and COVID, Brook and his mechanic Ben are still fine tuning his set up for the year, but he's been spending some intensive time in Lenzerheide trying to get it dialed before he returns to racing this week. Let's get into the details of Brook's new ride. 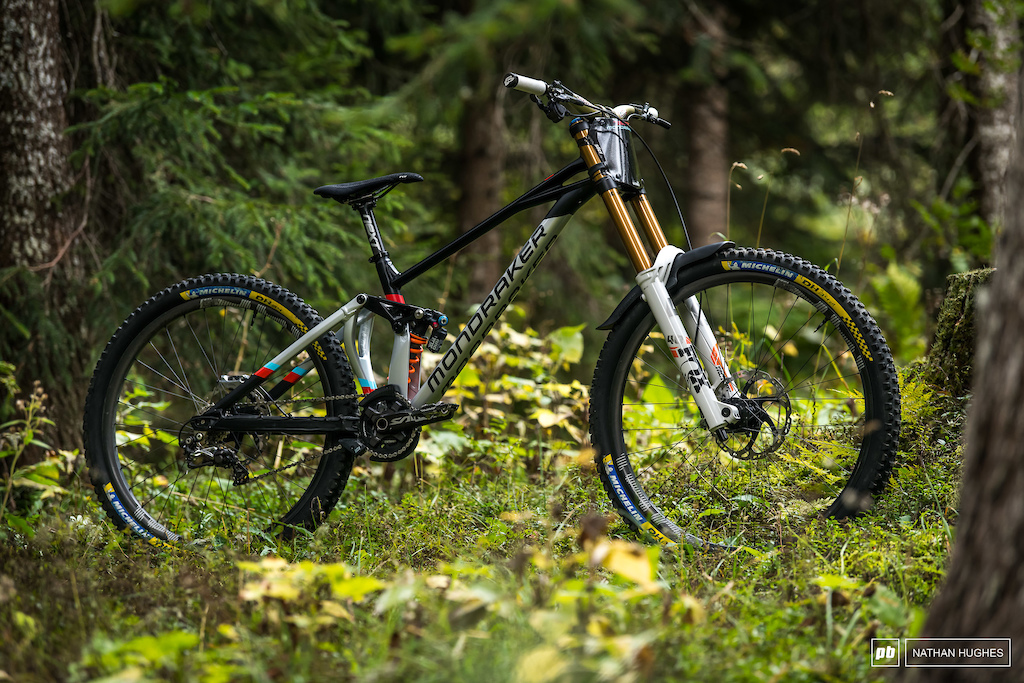 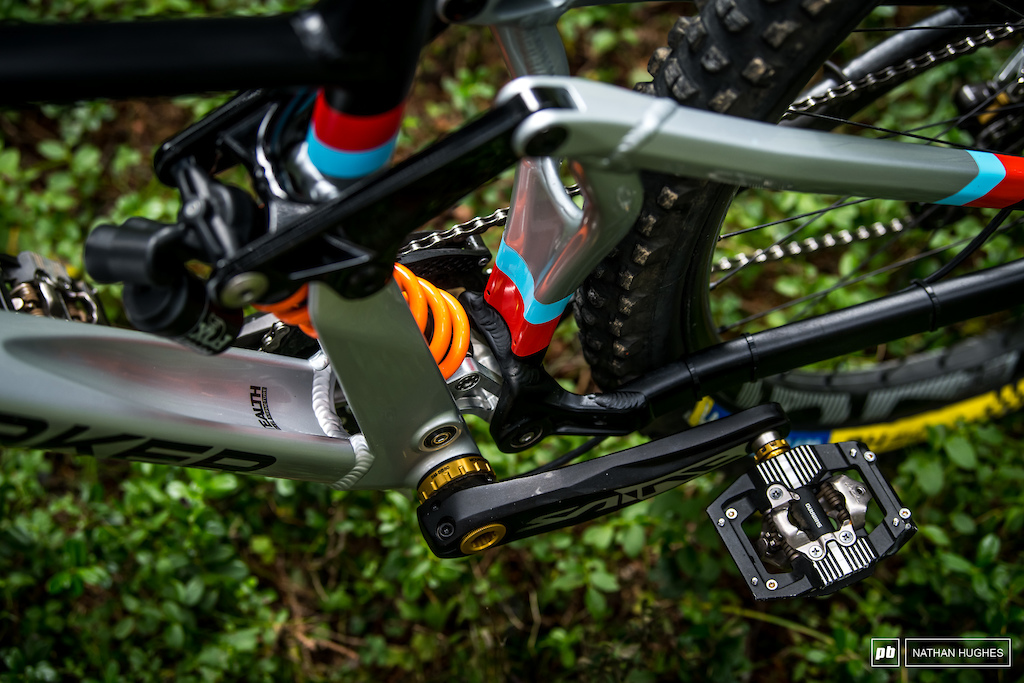 No carbon here. Mondraker went with an aluminum-only frame at the request of its racers who found the metal bikes more responsive. 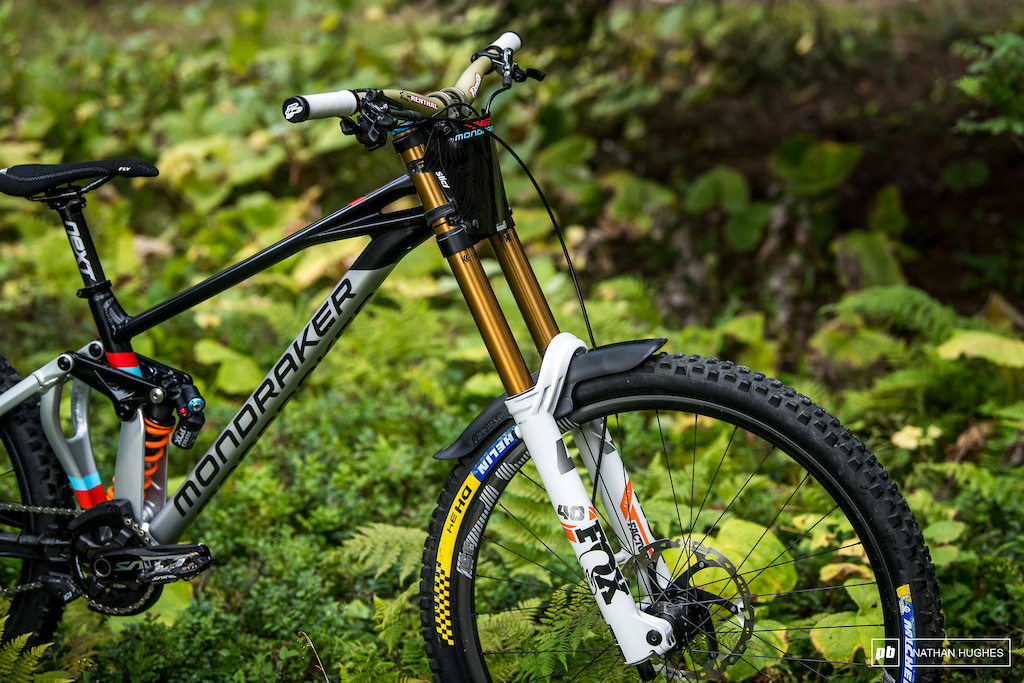 The reach has grown by 30mm on each size on the new Mondraker. Brook's mechanic tells us his geometry is a bit different from stock as he keeps the 63° head tube angle from last year's bike vs 63.5° on the new stock bike. Brook's BB is also 2mm lower than the stock bike at 348mm. 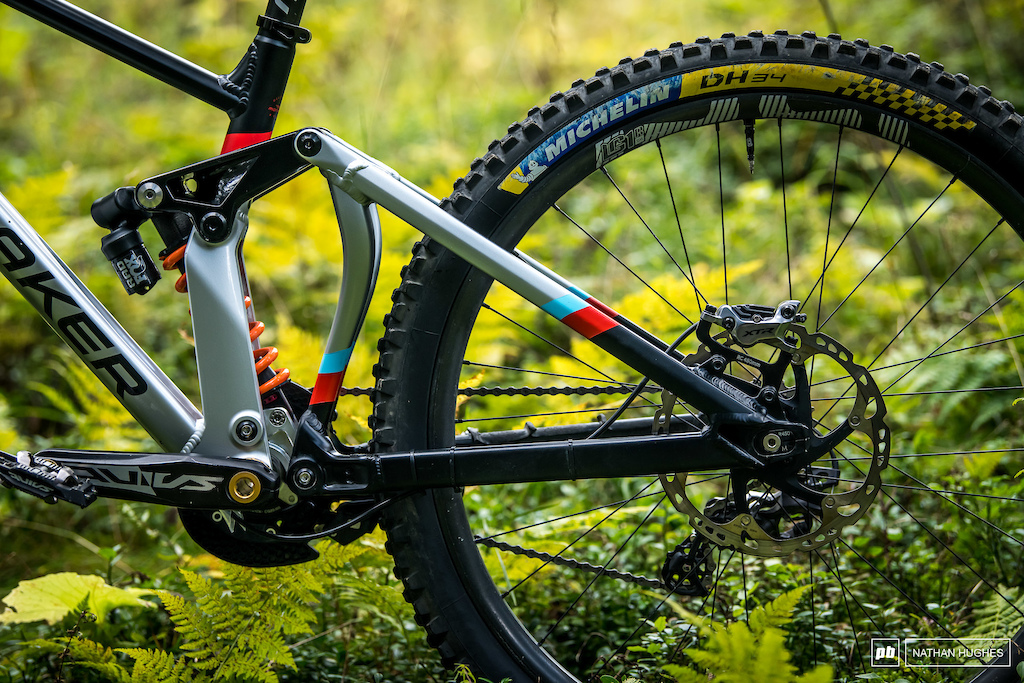 Chainstays are adjustable and Brook's magic number is 450mm. 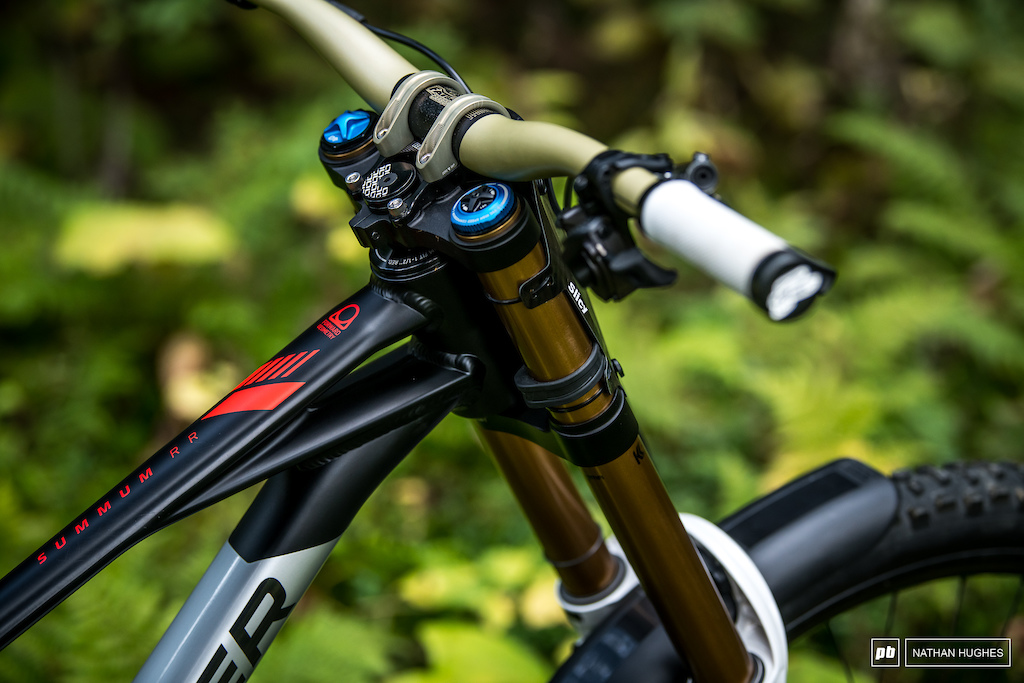 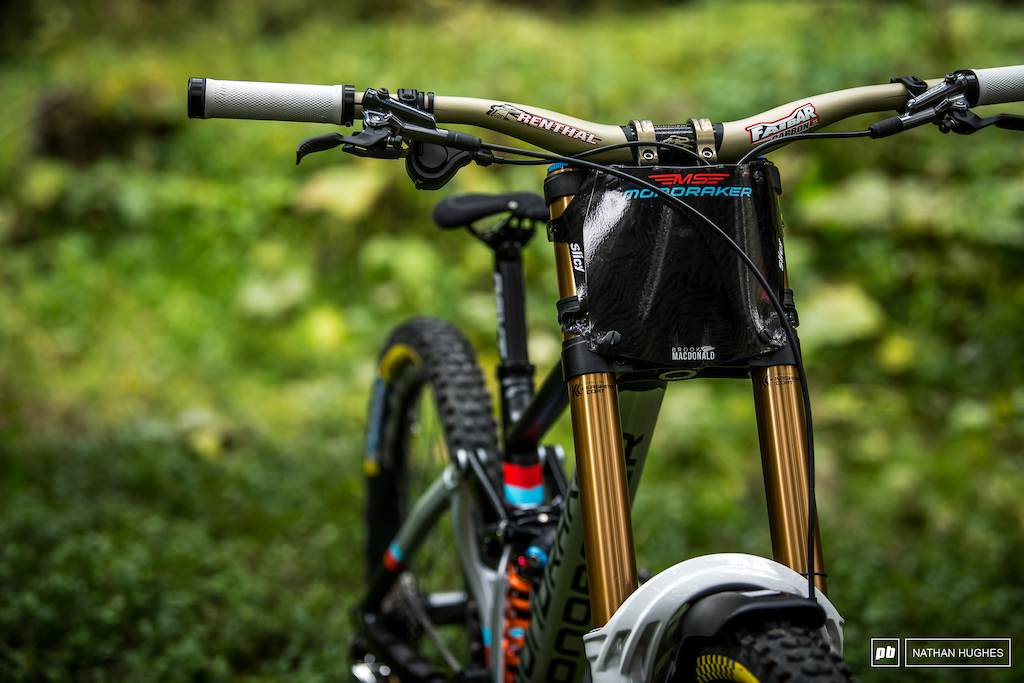 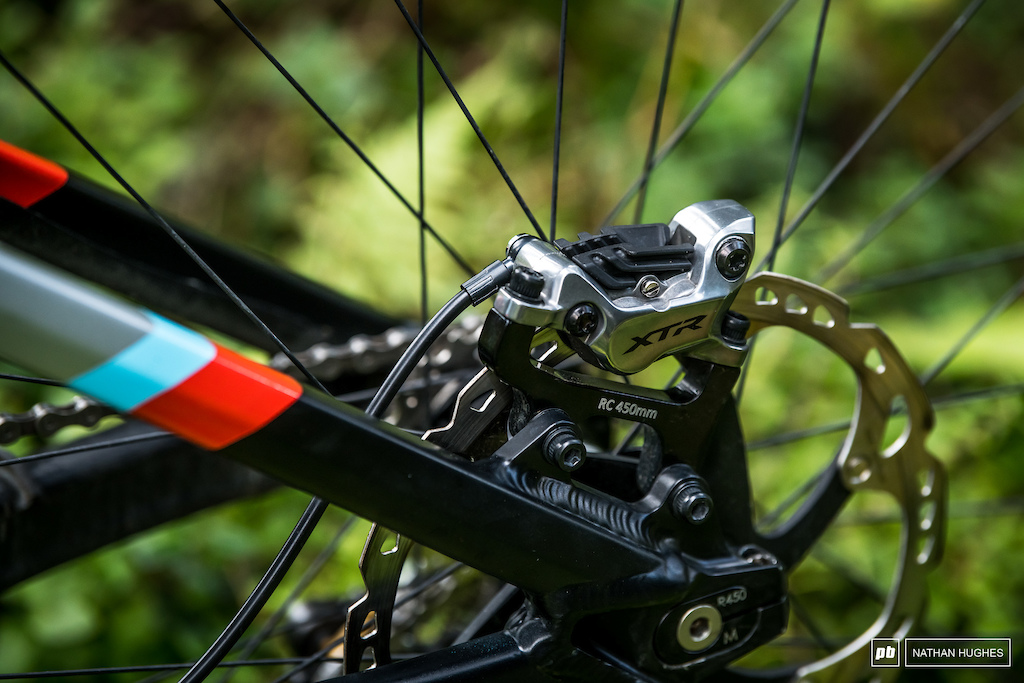 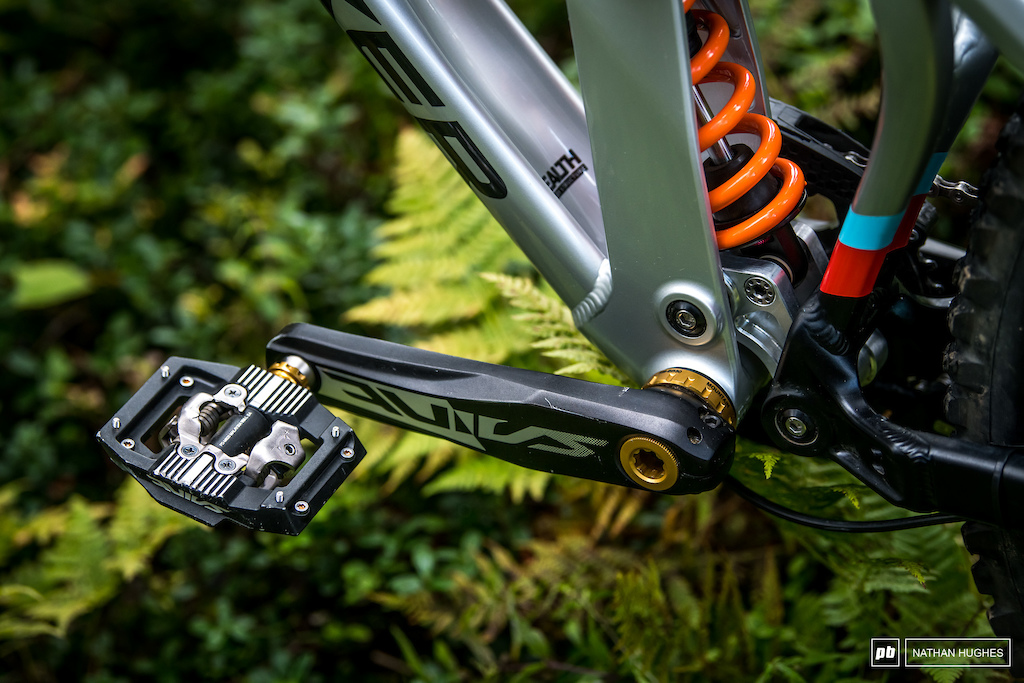 The rest of the groupset is old reliable Saint. 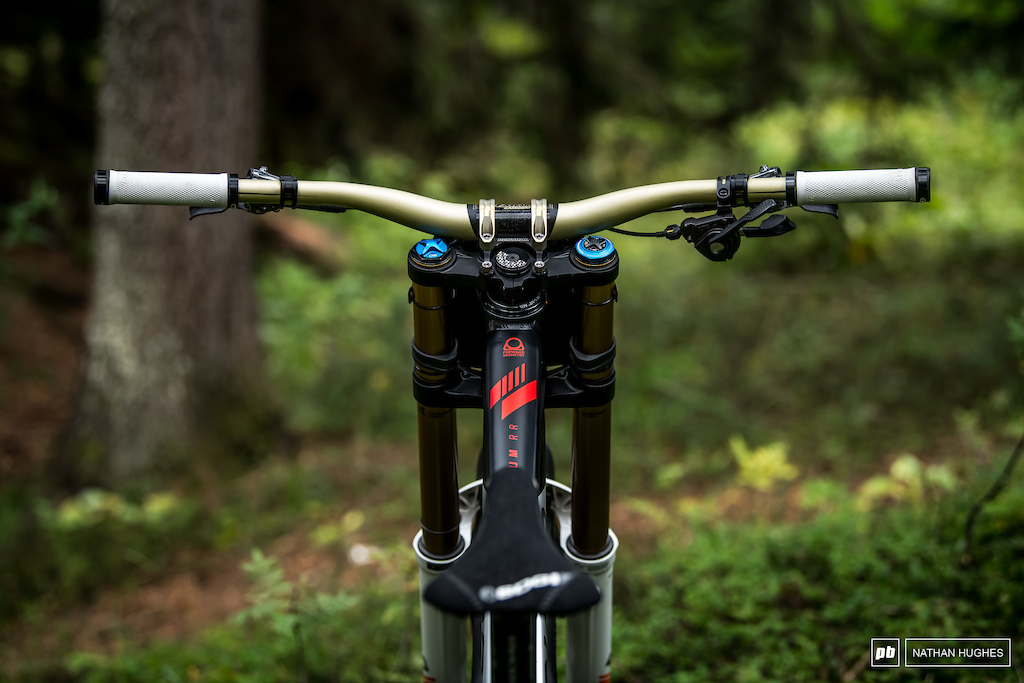 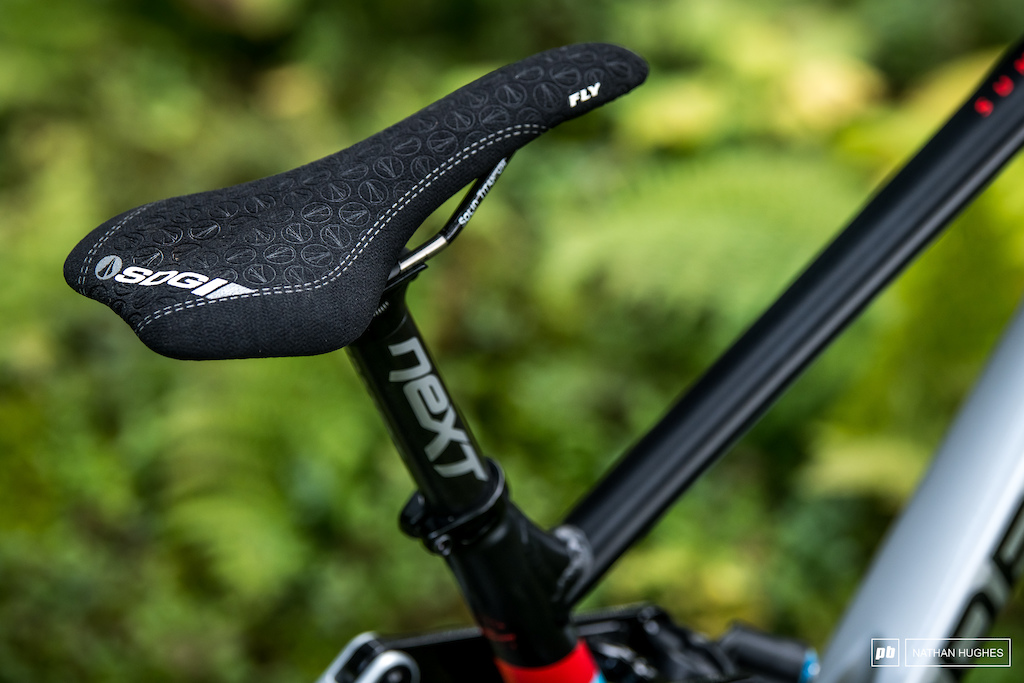 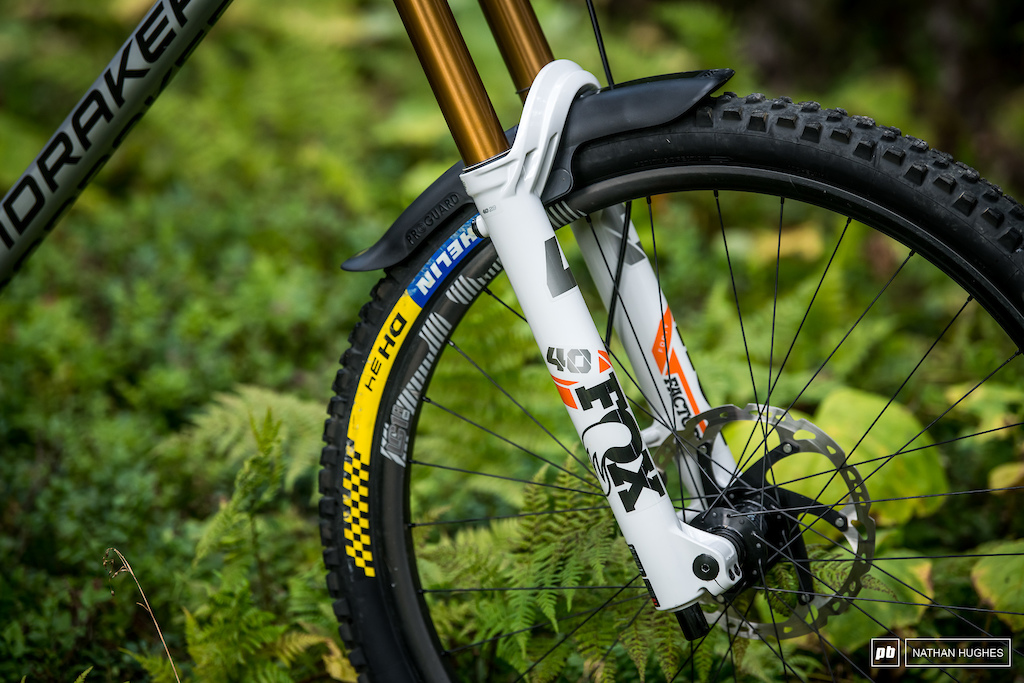 Brook might be hunting down a bigger mud guard when he sees the weather forecast for Innsbruck and Leogang. 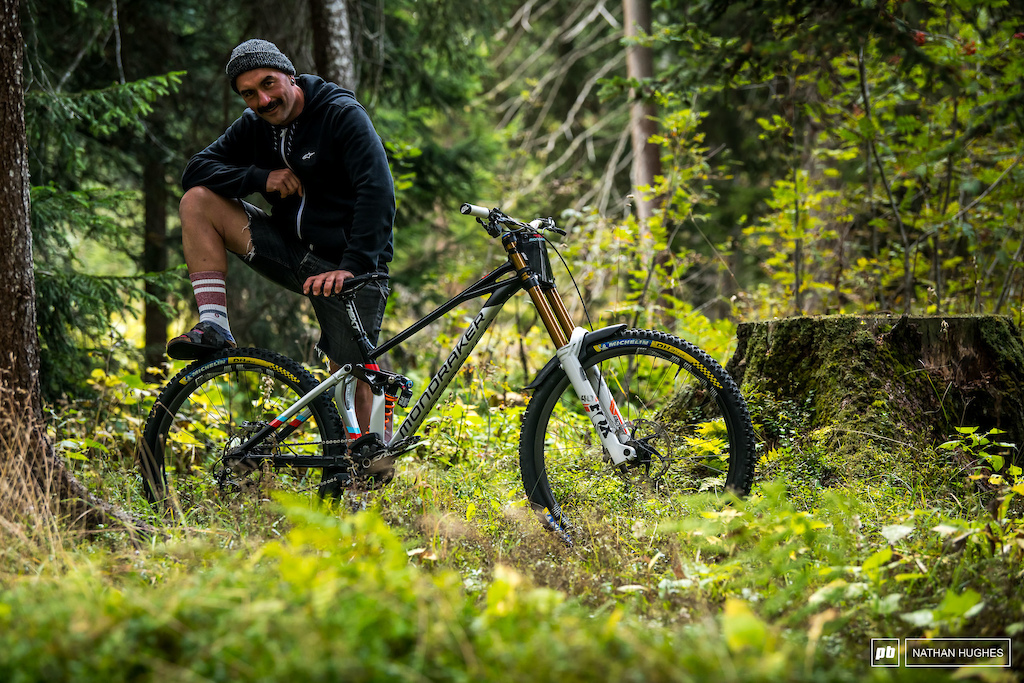 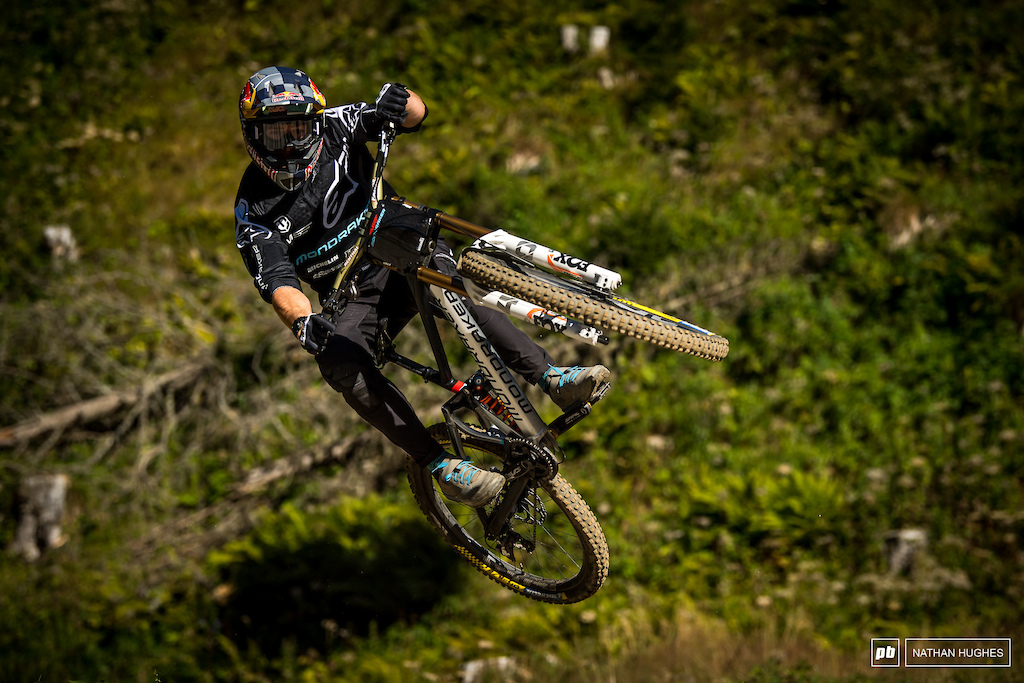 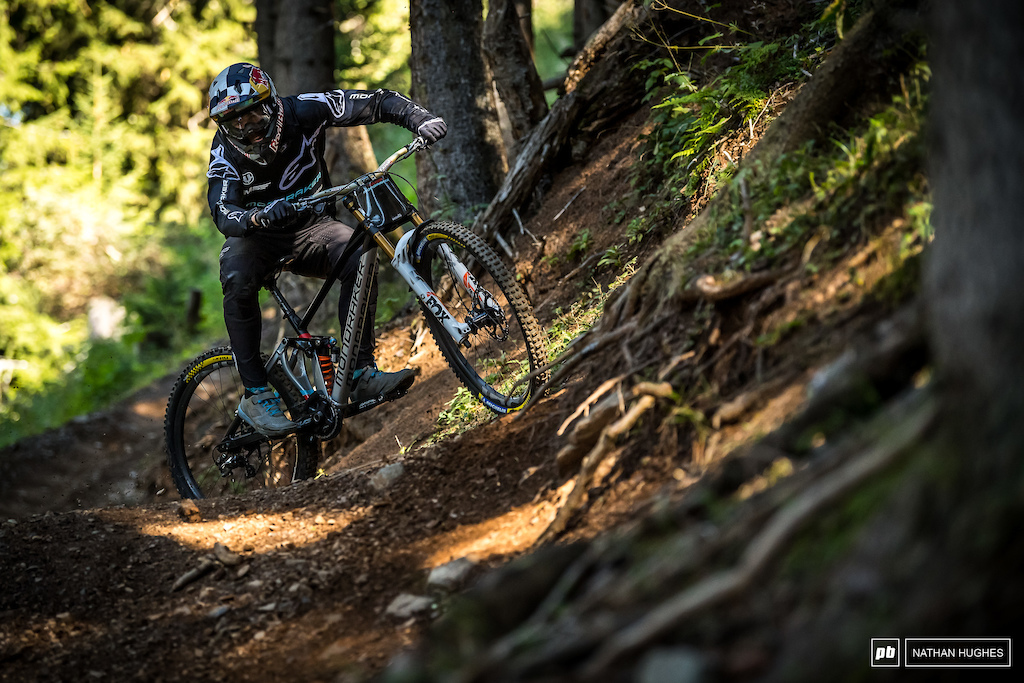 The Bulldog is back!

shittybill (Sep 29, 2020 at 17:34)
This dude needs an "S" tattooed across his chest. Maybe a cape as part of his riding kit. To come back from that and walk is miraculous, but to be riding at a world class level again...incredible!

GlassGuy (Sep 30, 2020 at 6:09)
@dockboy: Capes and bikes are bad news....I wore one as part of a Halloween costume and my then flames painted retro cruiser bike became part of this ensemble. In my mind the vision of my costumed look, cape flowing behind me while cruising down the street seemed very very cool! Jump to reality and if you aren't going 20mph the cape wraps into the rear hub, or even bundles into the rear wheel, causing either sudden pull on your shoulders/neck or stopping the bike completely. And combine that with being quite intoxicated the reaction time is greatly reduced. I woke up the next morning with a cracked knee cap...no riding whatsoever for almost three months. Life lesson.

GlassGuy (Oct 2, 2020 at 6:01)
@BaldBilly: One second slow down in a rock garden...cape loses lift and drops into cassette or wheel...drop off the rocks, rear wheel locks up....Boom. Cape no good. One time was enough for me, ha ha

chickenlassi (Sep 29, 2020 at 18:22)
No carbon here. Mondraker went with an aluminum-only frame at the request of its racers who found the metal bikes more responsive. No don't publish that please. All of the idiots are going to figure out that aluminum is better and then it's going to be more expensive . Just let them think that carbon is the best.

jamesroxby (Sep 30, 2020 at 1:42)
comparing materials for different components isnt really valid - shall they supply them with carbon tyres too? :')

striveCF15 (Sep 30, 2020 at 3:37)
carbon frames can deliver a better rider quality if done right IMO. sounds to me that the carbon summum had too much compliance for the team riders.

gravitybass (Sep 30, 2020 at 4:39)
@striveCF15: I think the big thing with aluminum in DH racing are all the custom setups the riders want, and aluminum allows the company to produce these parts easily. Commencal has said this is why they stick to only aluminum, so they can refresh their designs at a quicker pace. I think we'll see more aluminum everywhere in the future now that we're all geo and kinematics nerds, but for sure in DH racing.

FlysDown (Sep 30, 2020 at 5:16)
I've always thought that aluminum had better vibration dampening over carbon, but have no science to back it. There was a video of a weight dropping on a fork showing how strong carbon was over aluminum. What I took away from the video was yes the carbon was stronger and lighter but acted like a spring. The weight bounced longer. As where the aluminum was weaker and heavier but the weight came to a stop faster. Hope that makes sense?

jackheat (Sep 30, 2020 at 5:54)
@coletrane-mtb: yeah alloy (aluminium) is better in my opinion for DH racing because of the responses I have ridden both bikes in a carbon and a alloy- specialized demo 8 and the alloy for sure felt more responsive. although their will always be a market for carbon in the Xc/ trail/ enduro world because of the decreased weight. this is just my opinion but the stats speak for themselves 6/8 races last year were won with an alloy bike ( for DH)

My trail bike is carbon and it does feel too light over roots and rocks, where as my hardtail is aluminium and I find it sits well across rough stuff but kills my arms way quicker.

Still haven’t been able to recreate the feel of my old steel Cove though.

rockchomper (Sep 30, 2020 at 9:46)
@coletrane-mtb: I believe the reason commencal does it is more to do with environmental impact rather than geometry changes. Max commencal is very strongly spoken about not leaving a big carbon footprint.

flowisforpussies (Oct 1, 2020 at 1:46)
It's just a question of profit margin, not material property. Building a carbon frame is a much more expensive and slow process.
Has the price dropped down since they moved to aluminium?
The same story about Specialized
Maybe next year they will release a "special" full carbon version for merely 10000 dollars/euros

I get that companies want to pursue this strategy, but it kinda blows my mind that consumers demand it for themselves...

threehats (Sep 30, 2020 at 1:39)
@seismicninja this is everything that’s wrong with consumerism. A great product is a great product. Embrace the fact it doesn’t need to change and accept that it’s right to pay a fair price for it.

End the obsession with new new new and the devaluing of anything older.

larryssman7 (Sep 30, 2020 at 13:57)
@threehats: agreed. I think this is what's so interesting about the Saint line, it's been holding it down in the gravity world for a long time with minimal changes. If I was building a DH bike right now it would be hard to stray from something so well proven.

blackpudding (Sep 30, 2020 at 3:37)
Is nobody going to comment about Ben the mechanic's eharmony-ready photo? That moustache tho...
The bulldog will be screamed at the whole way down his world championship run, fair play to the man

kiwi-in-ns (Sep 30, 2020 at 8:18)
Dude’s rocking a more sophisticated crocs and socks and jeans cut-off look. This is a Tinder photo, he’s not looking for anything long term.

hmstuna (Oct 3, 2020 at 13:26)
@leon-forfar: I've seen it on a session with white decaling and in comparison to that it looks pretty grey

conoat (Sep 29, 2020 at 19:55)
@youknowitsus: I ride a Foxy. came off a Pivot Firebird. easily 2x better bike. And not in the, "yeah, this bike is a lot better" kind of way....like legit double the bike. Like going from a Huffy to an entry level Stumpjumper or something. Quantum leap in ride quality, fit and finish, performance, etc. It's a different sport on a Mondraker.

gonecoastal (Sep 29, 2020 at 23:36)
Because it is long. Mondraker was one of the OG forward geometry companies. Fabians MSA Summon had a 59°HTA near the end of his DH career.

AlanMck (Sep 30, 2020 at 0:52)
@gonecoastal: in reach terms this is the first long mondraker dh bike. The old bike was actually pretty small, but just had a massive range of HA adjustment. 61-65

betobi (Sep 30, 2020 at 0:02)
So Mondraker is setting a new head angle trend again by steepening it up :-) ? Revolutionary !
Mad respekt for the Bulldog. Bulldogs are my favorite animals :-)

PAmtbiker (Sep 30, 2020 at 8:09)
Those RRP ProGuards actually work really well. I have one that lives on my XC bike year-round even though it's dry af in the summer.

Best wishes Brook! Stoked to see your back (and you're back).