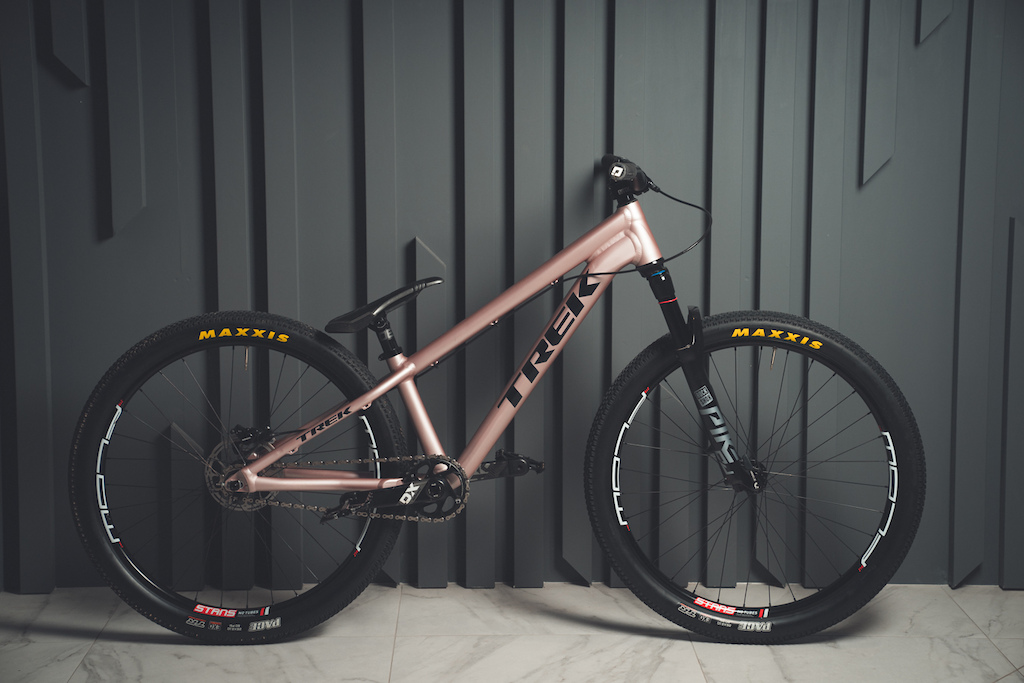 BIKE CHECK
Caroline Buchanan's
Trek Ticket DJ
Photography by Vibe Imagery
Caroline Buchanan needs little introduction. The eight-time cross-discipline World Champion has made a name for herself across BMX, pump track, dirt jumping, and more. After two trips to the Olympics in London and Rio and countless elite podiums, she recently announced that she is moving away from her full-time BMX focus and will primarily chase down mountain bike progression.

This week, Caroline joins eight other women at Audi Nines to make history at an event that has historically only invited men. After that, she plans to fly over to Crankworx Canada. To help her progression, she rebuilt her backyard "compound" with large dirt jumps and has shared several videos of big hits including both front- and backflips.

At this exciting turning point in her trajectory, we figured it's a good time to take a look at the bike Caroline will be riding at her upcoming events. We've already seen her putting it through its paces both on the ground and in the air, and can't wait to see more. 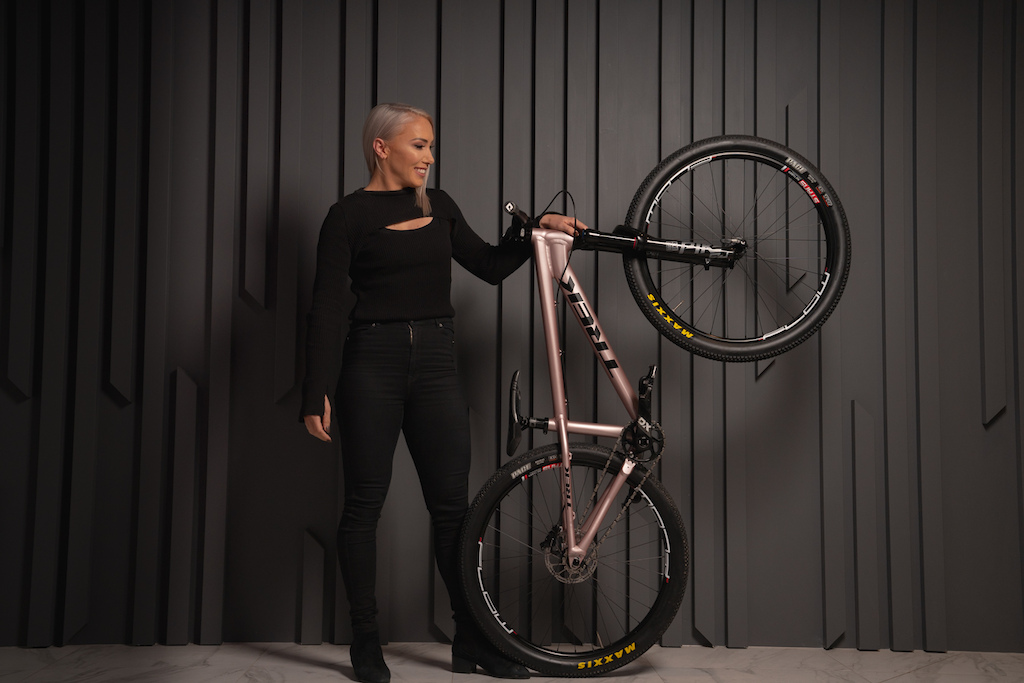 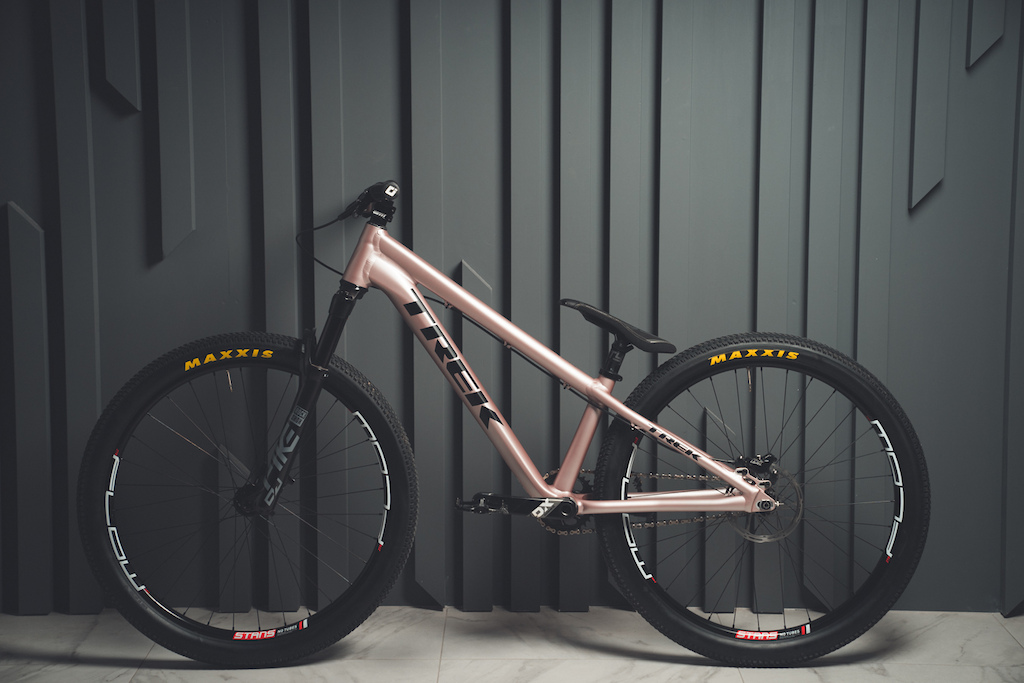 The Trek Ticket DJ is Caroline's bike of choice for dirt jumping. 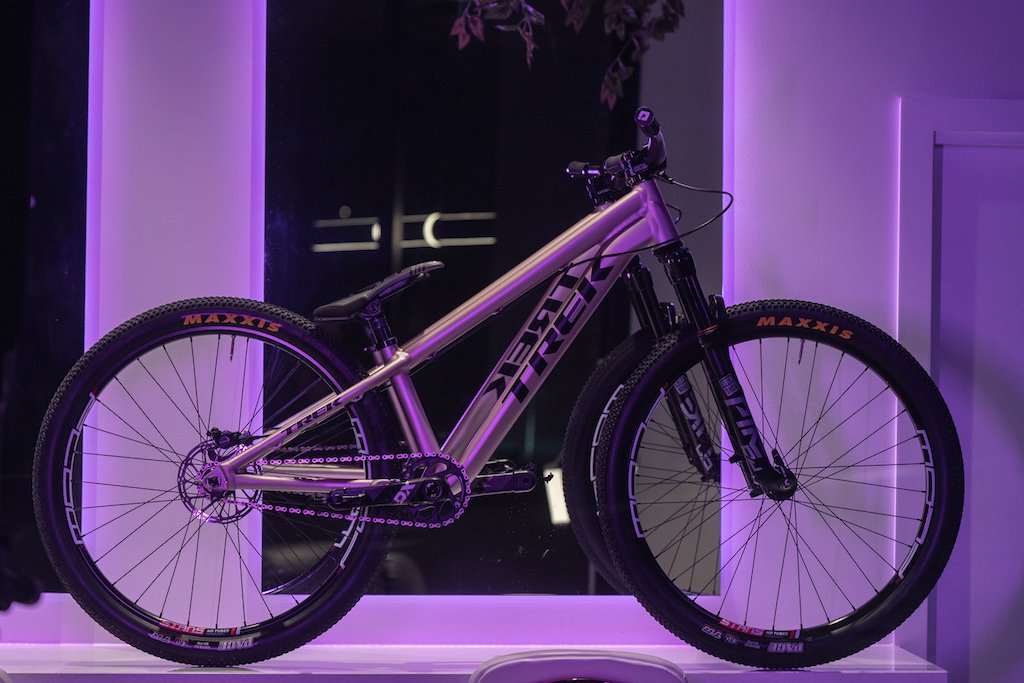 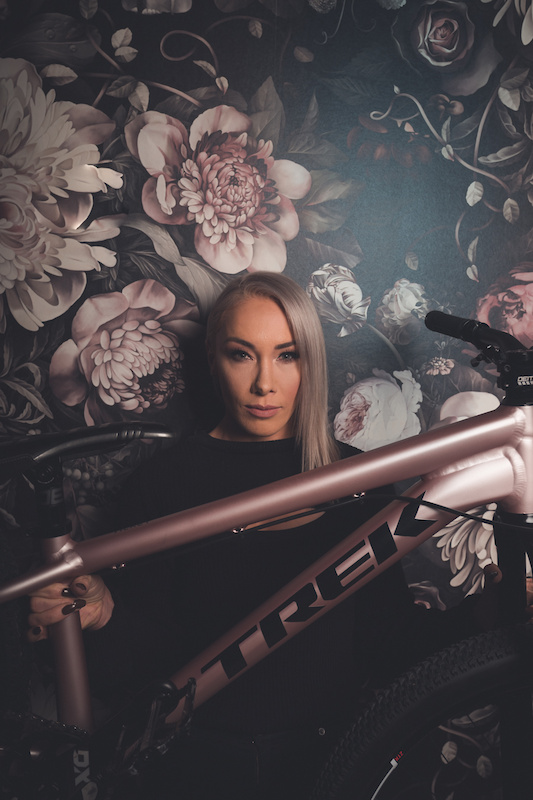 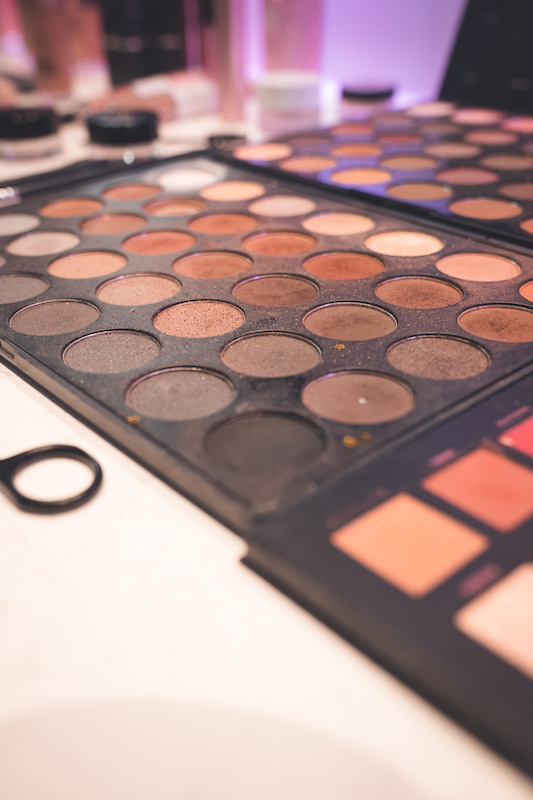 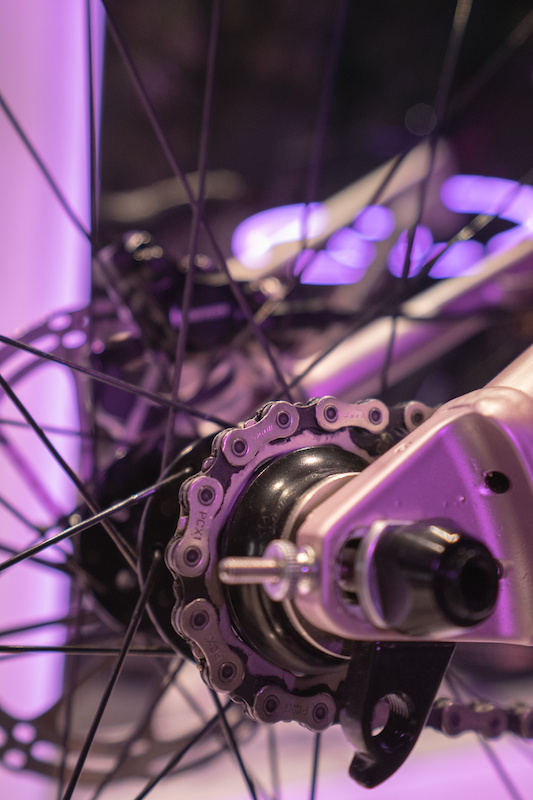 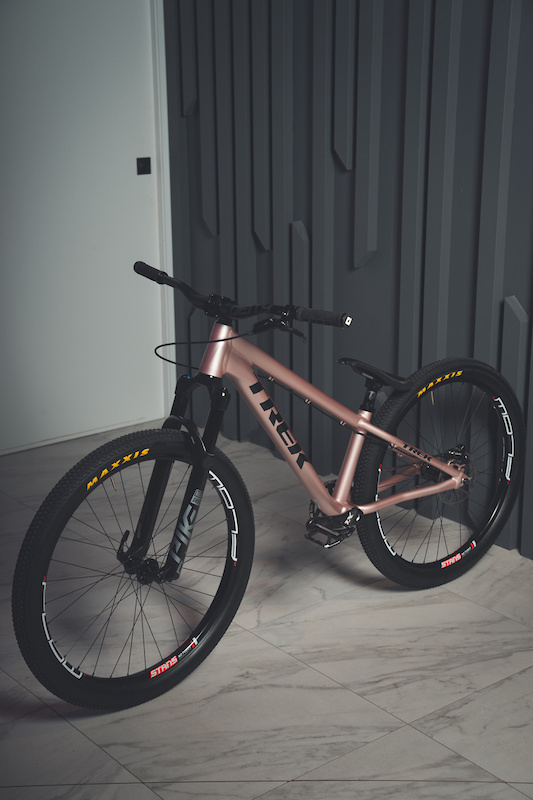 We'll see the full gamut of bikes at Audi Nines this week, from dirt jumps to downhill bikes.
Since she was five years old, Caroline said, she has run her rear brake on the right side. On this bike, however, she chose to change it up and swap the brake to the left side for dirt jumping and tricks. She's right handed, so tends to grab the bars with her right hand first and take that hand off the bars more often, and she would rather have the brake lever out of the way on the left. 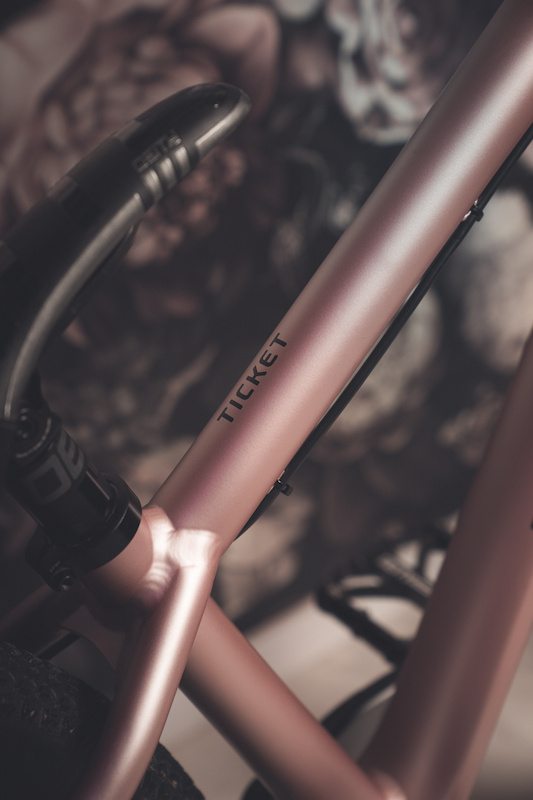 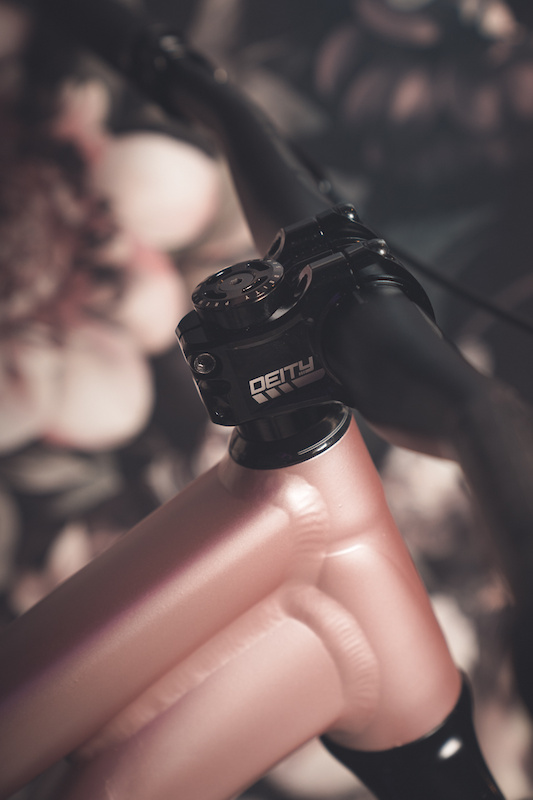 The bike is spec'd with a Deity saddle and cockpit, with 650mm bars and a comfortable 35mm rise. 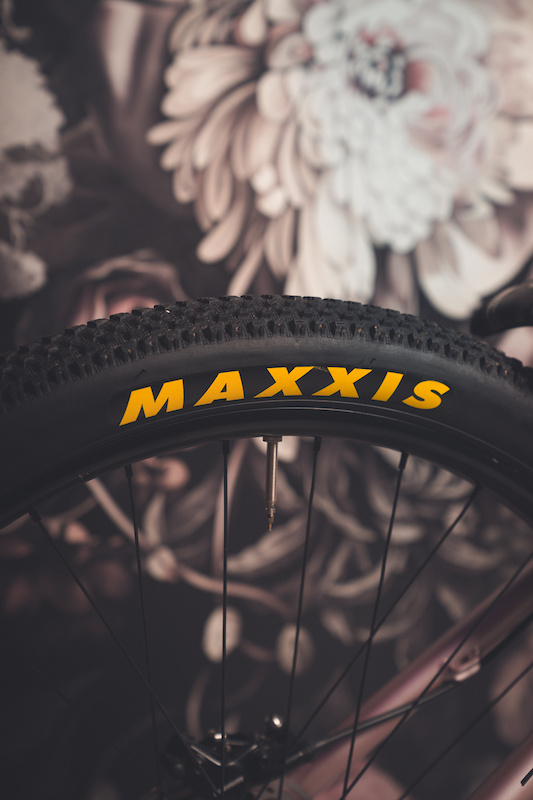 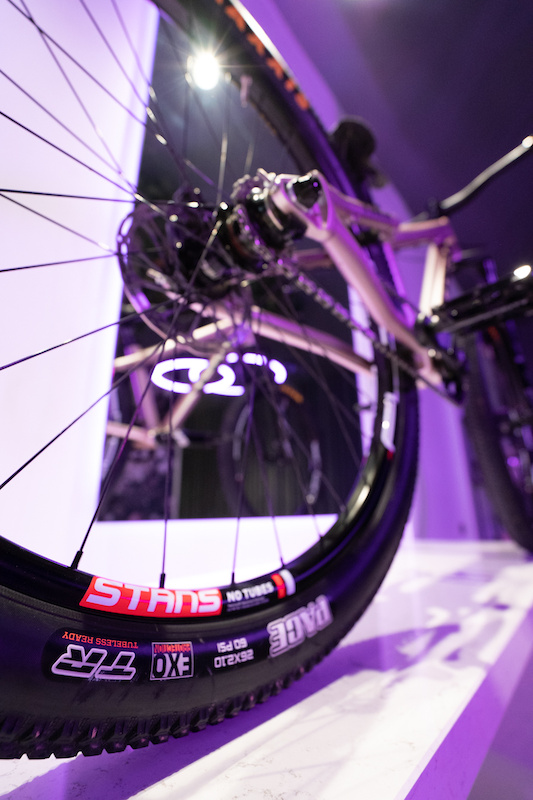 Stan's and Maxxis keep her rolling, and her preferred tire pressures of 40psi in the front and 36psi in the rear make sure she's rolling fast. 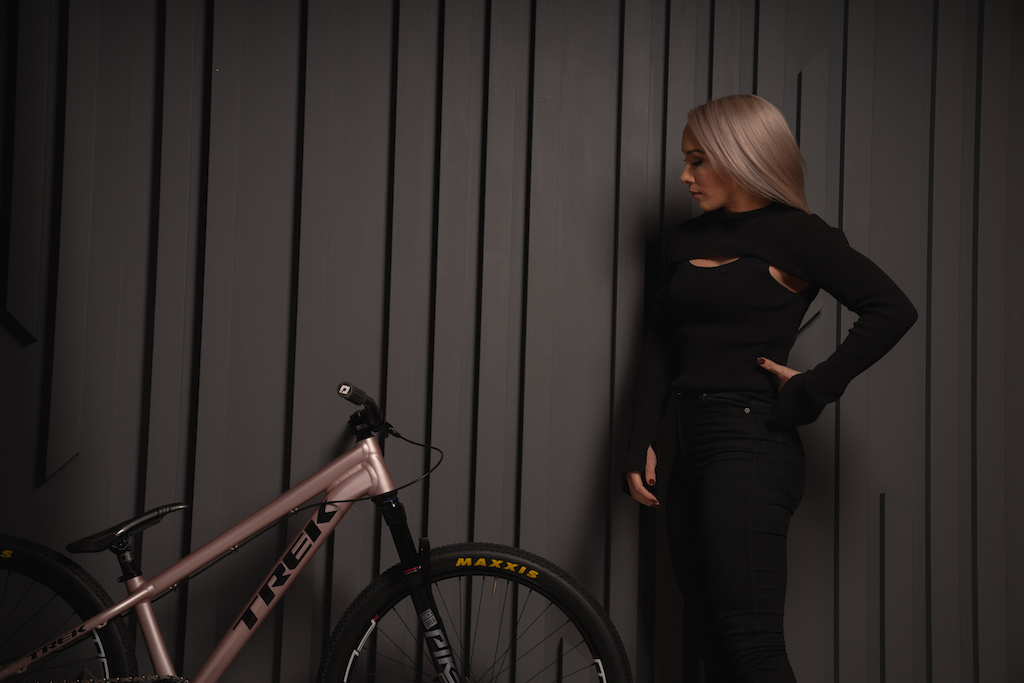 "Beauty and the bike," she said. Caroline can add glamor to dirt jumping like no other.

trollhunter (Aug 24, 2021 at 18:47) (Below Threshold)
The bike (Trek Ticket) thinks this big girls riding me is super fun - just don’t tell my friends or I might SLASHed and there won’t be any remedy to embarrassment…

Drawn (Aug 25, 2021 at 3:50)
@onemanarmy: It did seem like CB was chasing another shot at the Olympics before not being selected.
Having seen her racing CB's skills are incredible, with the practice in adding a bag of tricks will definitely make her one to continue following and watch her chase the riding dream.

hardcoredivision (Aug 25, 2021 at 1:16)
I was thinking the same...my Mutant Bikes Petyan with an heavy crank set and wheels its arround 10,75Kg.
I am Shocked, how can this bike with carbon crancks and minimal spec be at 13kg?!!

rcmalinchak (Aug 25, 2021 at 3:47)
New design. R-Dog is riding one with that updated back end too. The Ticket Ss that Semenuk, Rheeder, etc have been on the last few years have been evolving too but the production model has been the same since 2016(?). Curious whether or not this updated Ticket DJ frame will be available to the public or if it will be like the pros S frames

pen9-wy (Aug 24, 2021 at 23:13)
Great bike. Legendary rider.
I had a BMX to skill up for MTB when I couldn't hit the trails and I could manual/bunnyhop pretty well on it - super fun but I found when I got back on my mountain bike it didn't help too much as the wheel size and length and weight was just soo different.
Anyone use a DJer in a similar way? Do you find it feels very different or is it more transferable when you get back on the big bike?

Balgaroth (Aug 25, 2021 at 0:54)
Reason why I took on Cruiser rather than proper BMX when I started BMX race few years back. But many friends from either BMX race or DJ ride 20" and have no problem taking their skills on the Mtb. It is pretty frequent that when I encounter some rider that is particularly good at jumping they also happen to BMX Dj. Moves and balance is the same, it taks few tryies to re-adjust to the bike you are riding but no worse than transitioning from HT to FS or Trail to DH bike for instance.

nyhc00 (Aug 25, 2021 at 5:29)
To add to what @Balgaroth said riding a bmx or DJ bike consistently whether it is at dirt jumps, street or a skatepark also expands how you look at a mtb trail and potential features that others ride right by.

Balgaroth (Aug 25, 2021 at 6:50)
@nyhc00: Two prime exemples of this for me was manualing in holes (like a natural double) and pre-hoping stuff, two things I never done before starting bmx racing. Not sure it makes me faster but it certainly makes riding even more fun and engaging. At a completely different level, If you follow DH WC, Daprela (former BMX racer) had a very special sequence at the top of Leogang, using the doubles offset to the normal rythm if I remember well, this is a typical BMX race stuff.

Doogster (Aug 25, 2021 at 8:14)
Ripping around a skatepark or riding dirt jumps on a bmx makes switching back to the mountain bike feel like slow motion for me. I have so much more time to react and adjust on the trail bike versus a bmx bike.

Rlv199 (Aug 26, 2021 at 5:09)
The weight on that bike is wayyy off. My absolute (which is a way bigger frame) with heavier brakes (trp) and a heavier saddle weighs in at 21 lbs so I know damn well her tiny bike with that component list same fork and wheels as me with carbon cranks is probably sub 20

the description is flipped, it says: "Stan's and Maxxis keep her rolling, and her preferred tire pressures of 40psi in the front and 36psi in the rear make sure she's rolling fast."

aka higher pressure in the front than back. seems backwards, no?

getsendywithit (Aug 25, 2021 at 9:53)
She's a little lighter than most of us, but it could also be set up for audi nines. That is one big ass dirt course, so the lower pressures might give a little more traction in high g banks and passive suspension on the landings.

rifu (Aug 26, 2021 at 5:06)
@Evansmtbsaga: is it due to forward weight bias? less pressure in the back to avoid spinning out during out of the saddle efforts?

sumskillz (Aug 24, 2021 at 20:20)
I don’t get the popularity of those tires. I scrub out on them, be it in concrete bowls or dirt. I wiped out so many times in one week….changed them immediately.

imnotdanny (Aug 24, 2021 at 21:14)
low rolling resistance I'd bet. Those seem like low pressures (for BMX style riding) so maybe that helps grip.

AntN (Aug 24, 2021 at 17:41)
Oh Carolina is a girl
She dey pon top a di world
An now she rock her body
Anna move just like a squirrel
I say young baby girl
I said I love how yuh move
Yuh just a rock to di riddim anna riddim anna move
An now yuh know di girl

AntN (Aug 24, 2021 at 18:49) (Below Threshold)
FYI it's song lyrics and posted with the utmost respect for Caroline, with parody used in relation to bike riding. Do not commit 'mind projection fallacy'.