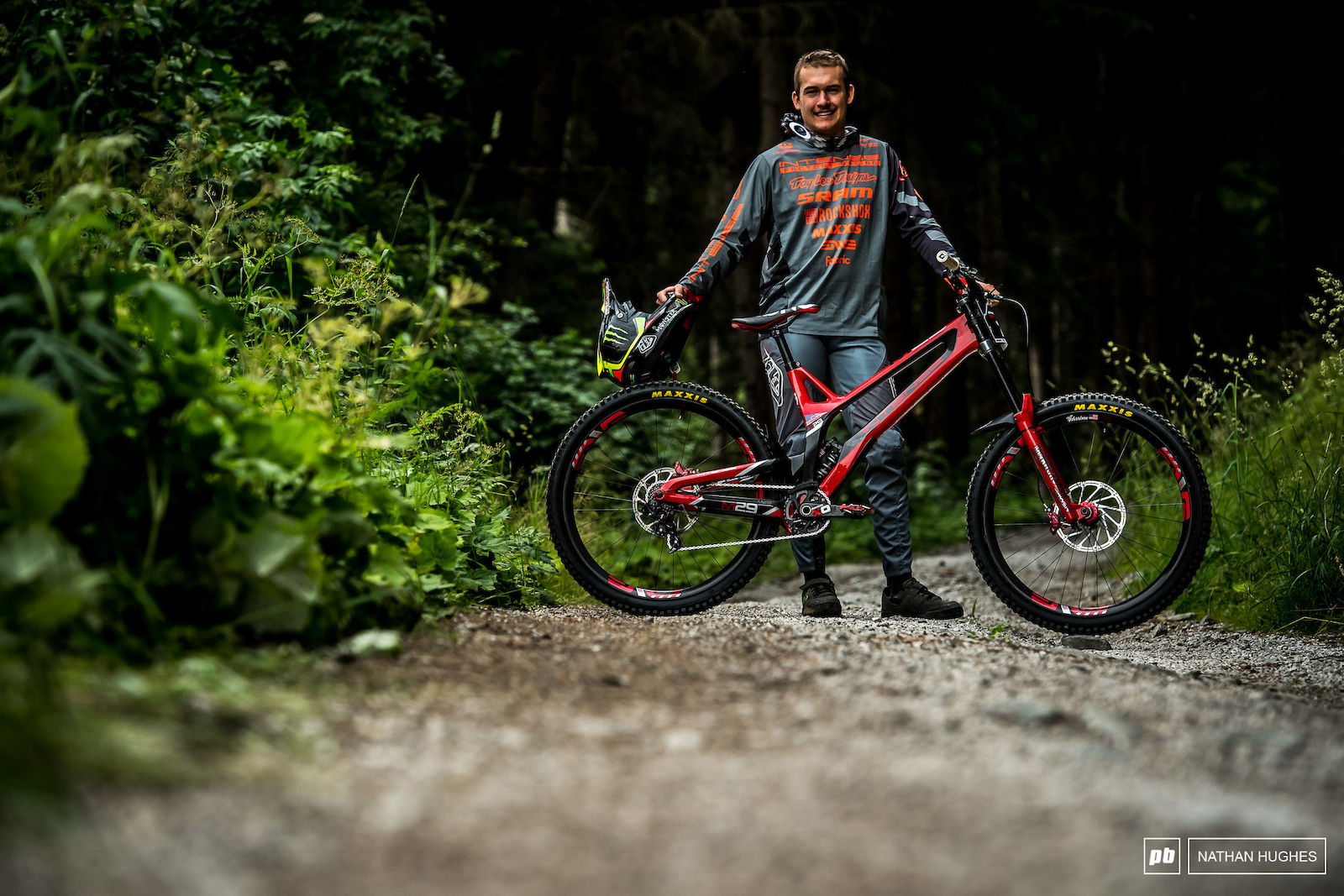 Charlie Harrison is yet another American who has been steadily gaining speed over the last few years. The California native has finished in the top 20 in every major race he's started this season and grabbed third place at the Crankworx Innsbruck DH race today making for his first Crankworx podium. With the consistency he's shown, it likely is not the last time we'll see him on the blocks this year.

Charlie is currently living in California, although he also spends a lot of time in Eastern Tennessee training at Windrock Bike Park. Charlie's bike set up can vary quite a bit from week to week. He makes changes more according to feel than anything else and does so quite regularly, making adjustments from one practice run to the next.

2018 is Charlie's second year with Intense Factory Racing. He's riding the 29" wheeled M29 FRO for DH and judging by his results, he seems pretty comfortable on the larger size hoops. 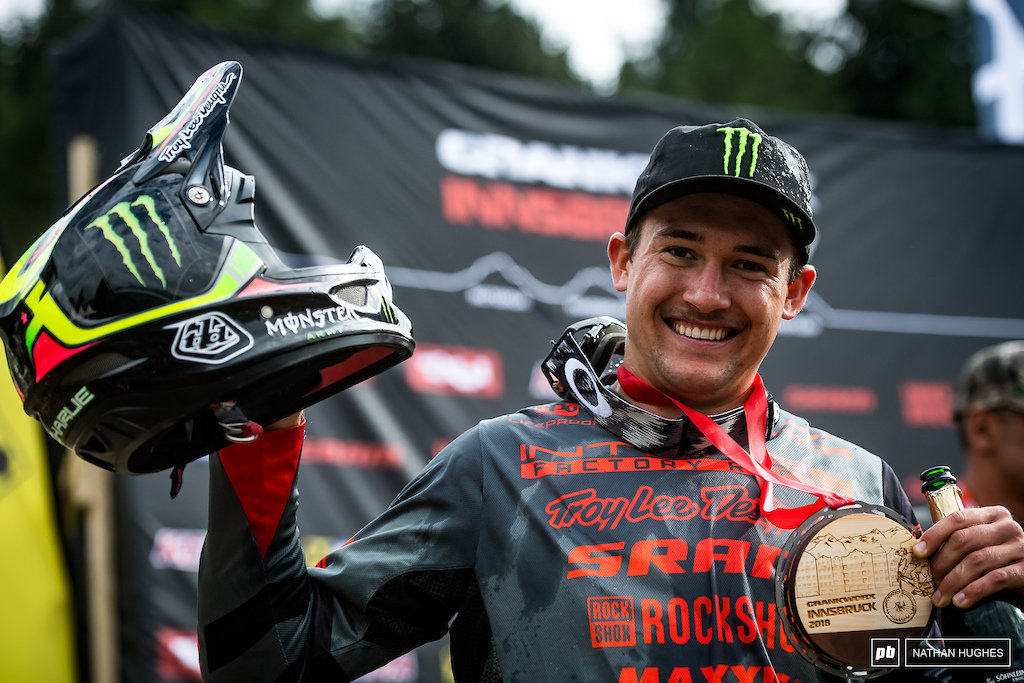 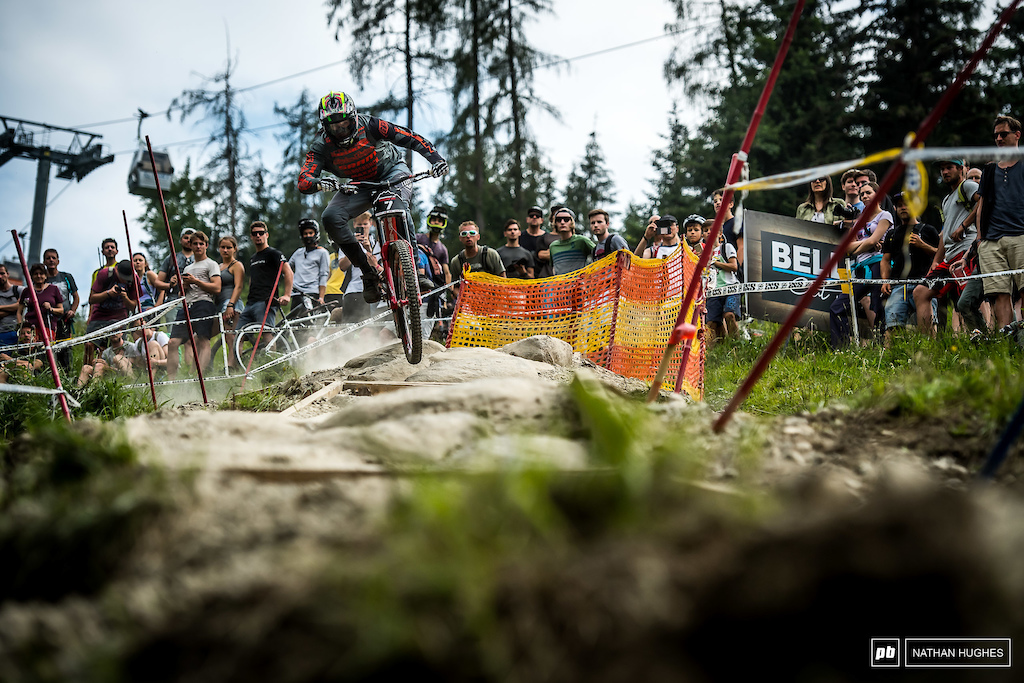 Charlie racing to the podium at Crankworx Innsbruck 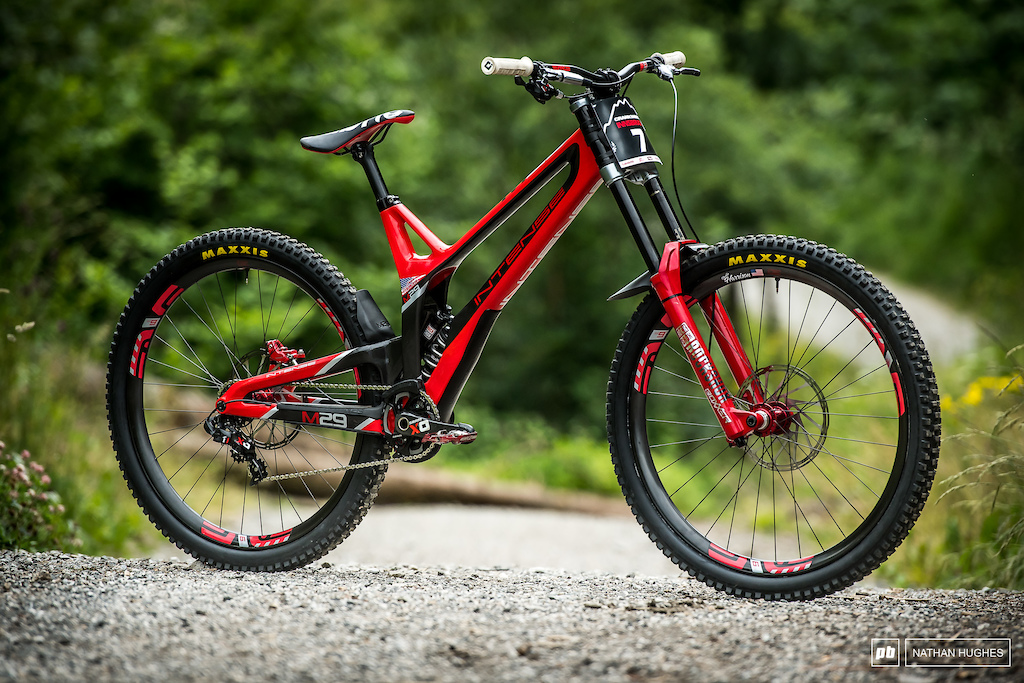 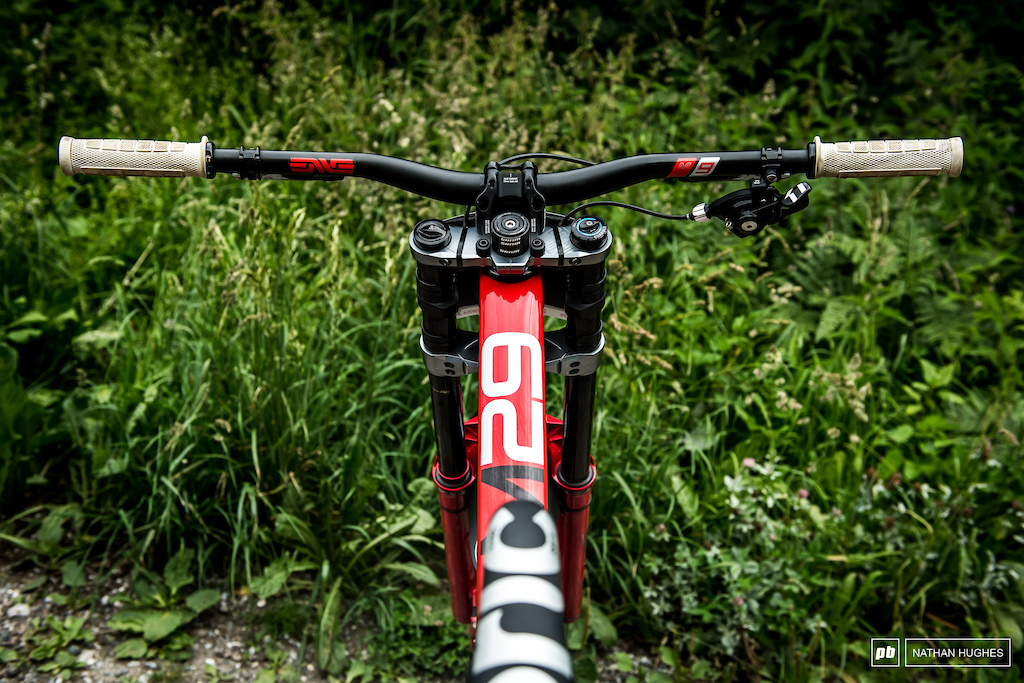 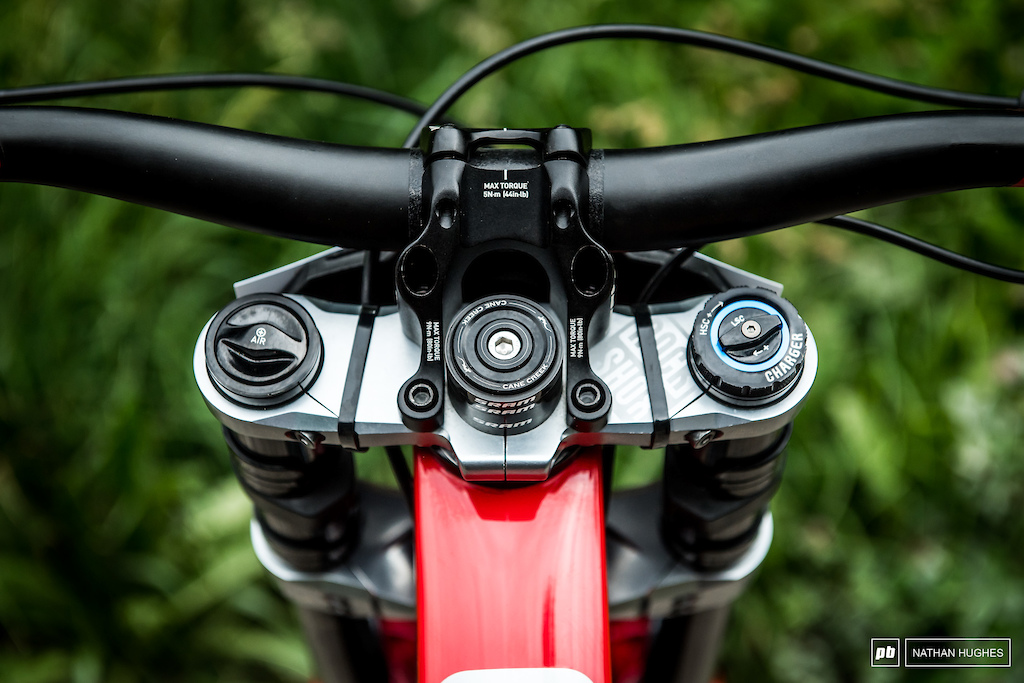 Charlie's ENVE bars are 800mm. He uses a Truvativ 35mm direct mount stem and offset Cane Creek headset with no spacers between it and the crown of the fork. 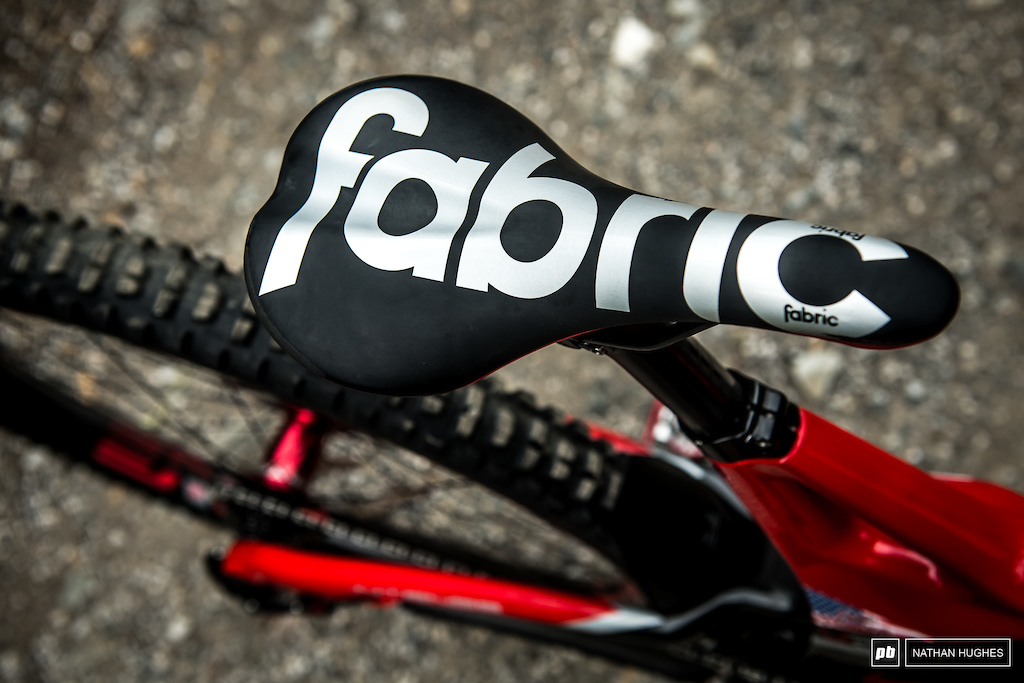 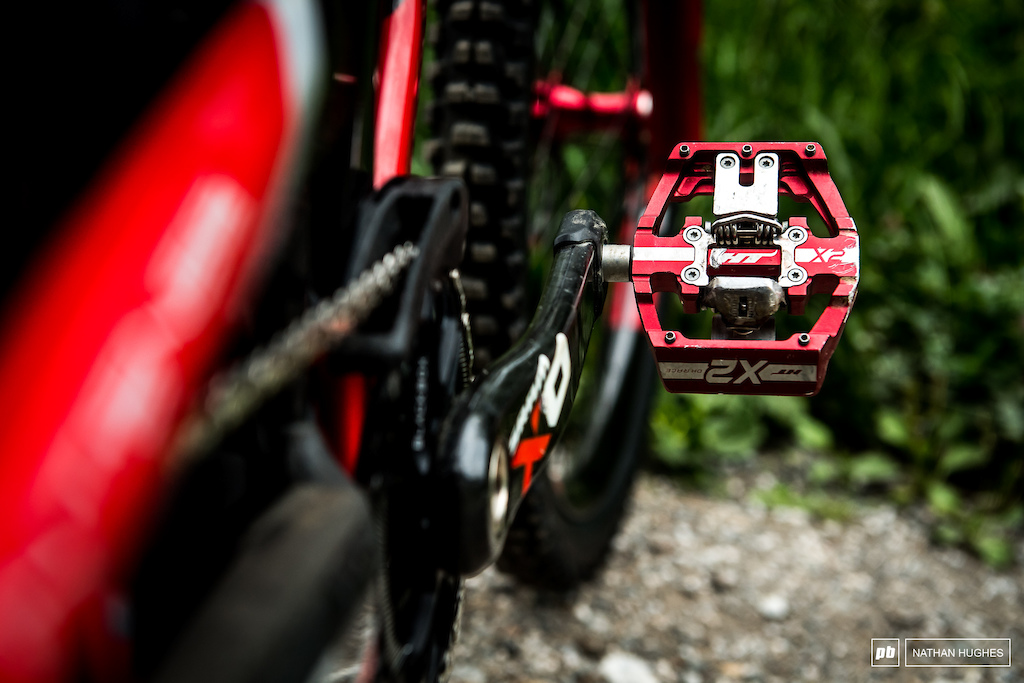 A Fabric seat and HT pedals complete the touch points. 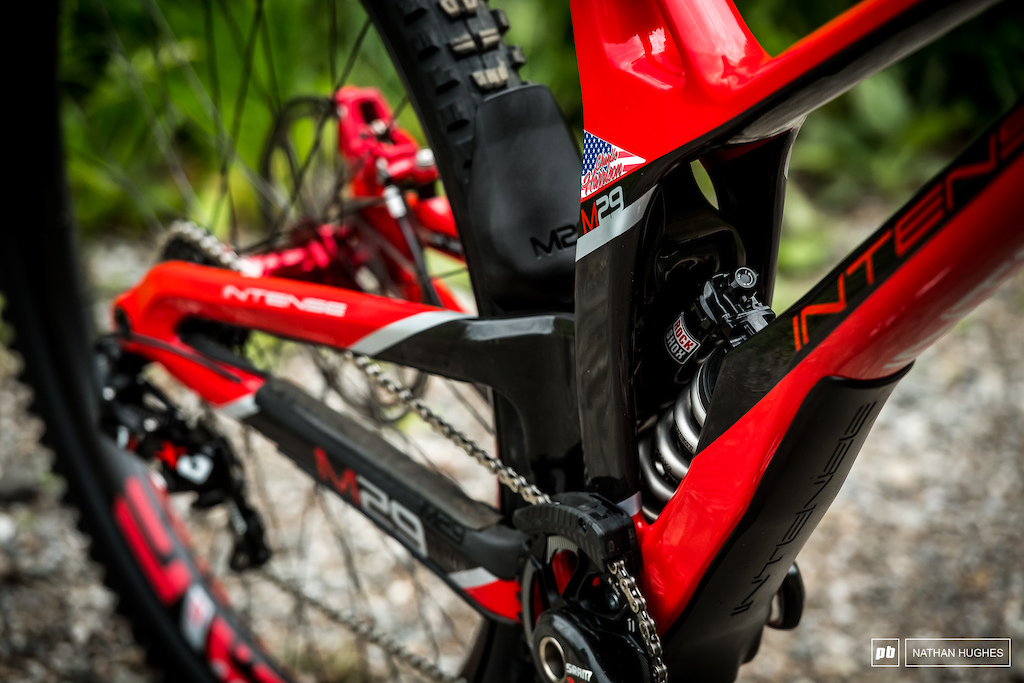 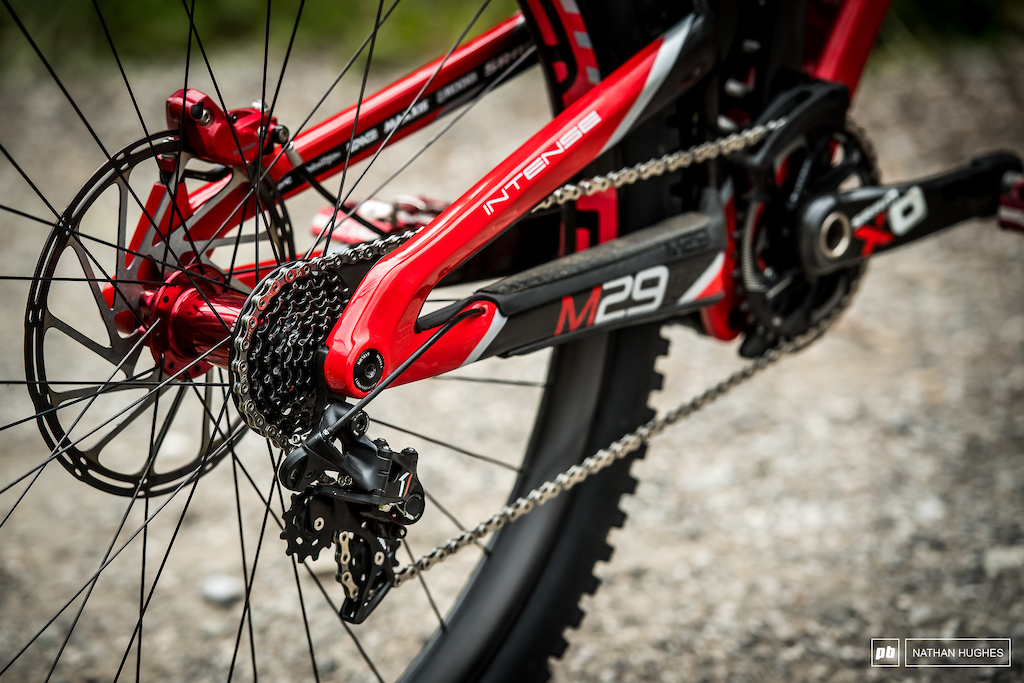 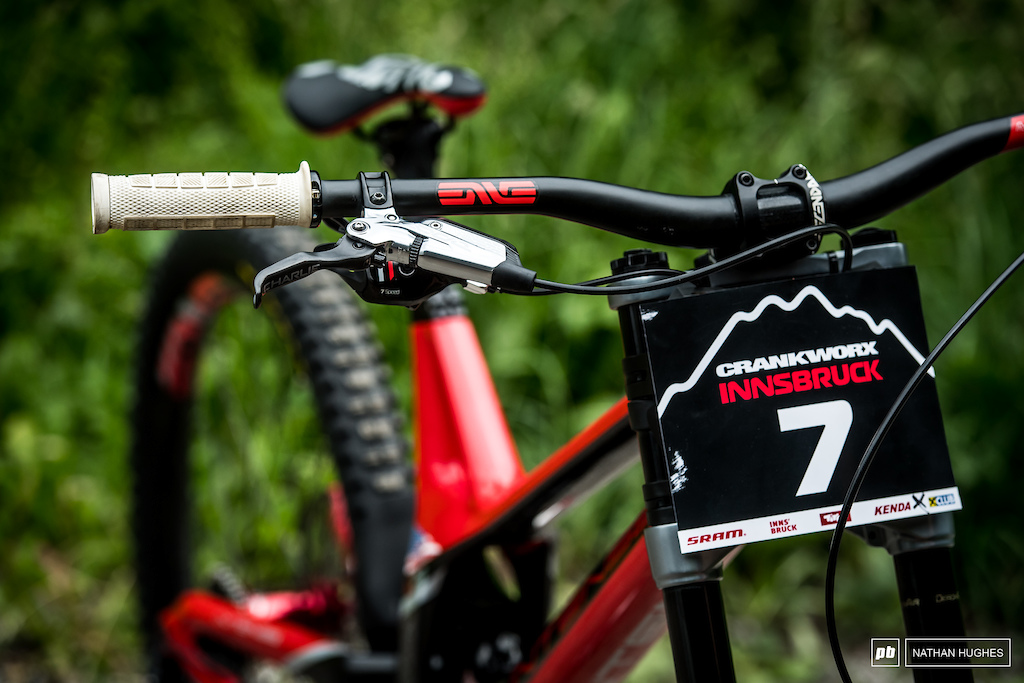 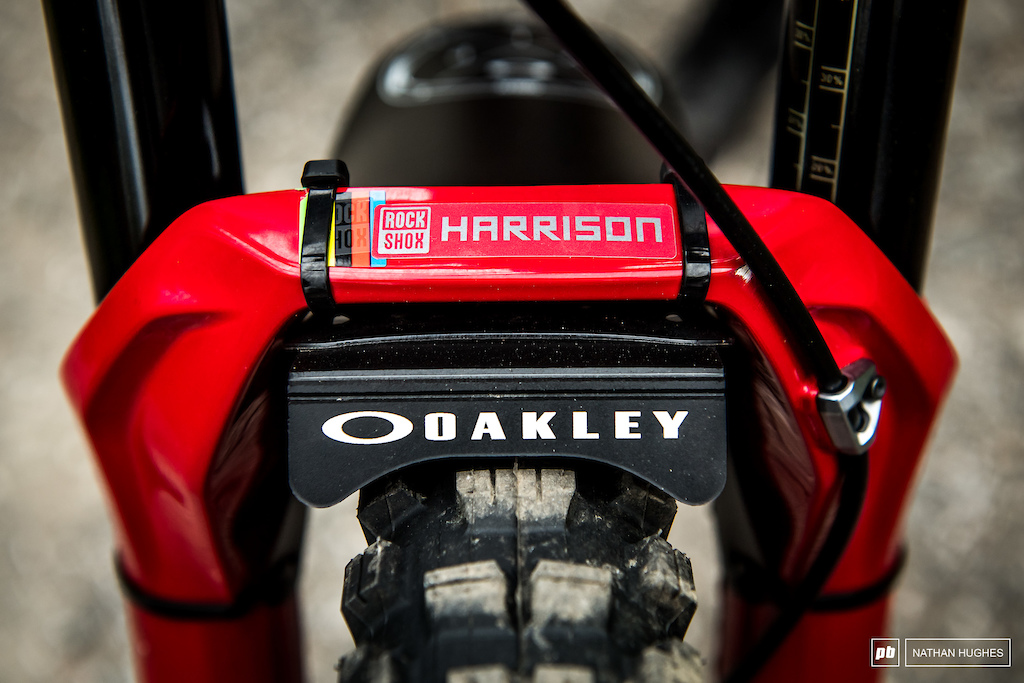 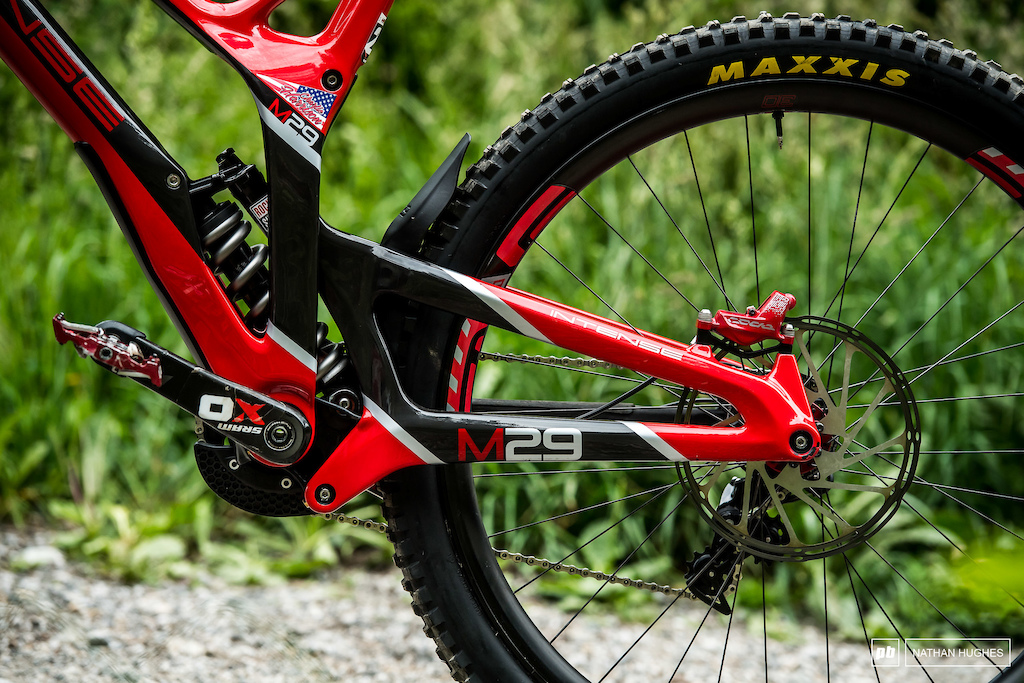 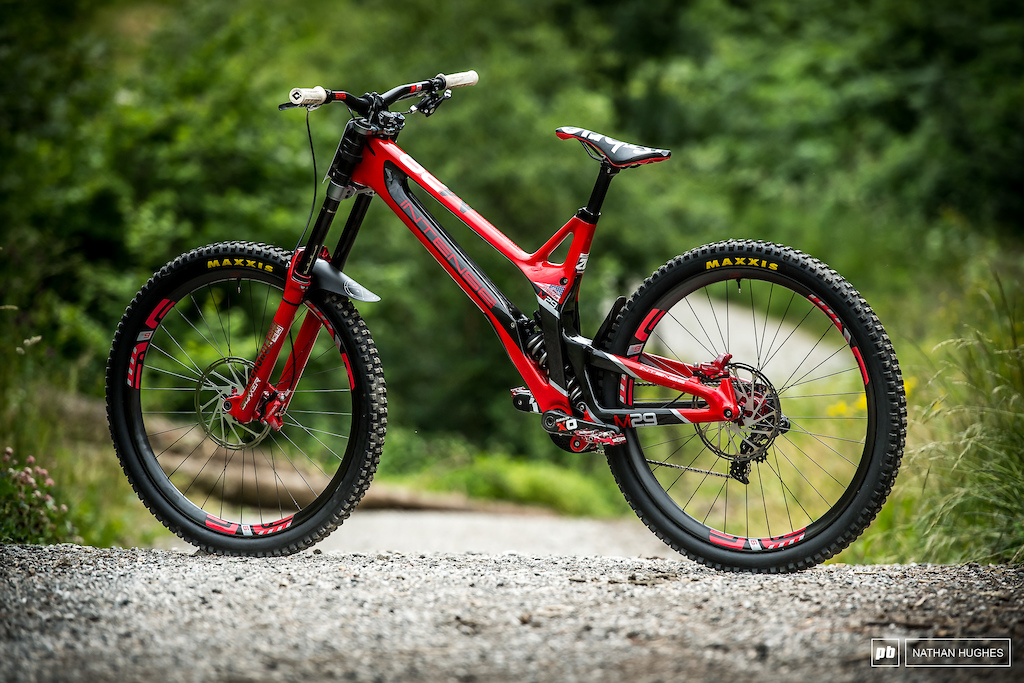 It's not as much "if" but more likely "when" we'll see Charlie on the podium again this season.
MENTIONS: @intensecyclesusa / @charlie_harrison_

newbermuda (Jun 17, 2018 at 18:07)
big wheels need big rotors! i wonder if youd get any flex with bigger one-piece rotors though

bapaul (Jun 17, 2018 at 23:19)
@G-A-R-Y: I still feel that this is due to the way (almost) all manufacturers make it so the struts going to the hub are loaded in compression under braking forces, making it inherently unstable compared to if you'd flip the rotors over and would pull on the struts, making it more self alligning. Collegue of mine (who's a mechanical engineer) has actually been asking this at some bikeshows and the reason they do it like this for mainly design reasons apparantly

freeriderayward (Jun 17, 2018 at 23:24)
Hayes used to make a 9 inch rotor back in the day. In the catalogue there was a weight spec for each component, and under the 9 inch rotor it said don't ask.

Cordall (Jun 17, 2018 at 23:40)
@bapaul: More to do with designing in latent safety. If a bolt is installed incorrectly you'll still have a brake (for a while). If the bolt was in tension (or shear when using an older ISO mount) a loose bolt would fail very quickly indeed, leading to a catasrophic failure. That is one of the reasons of the mass switch to post mount a few years ago. (That and making us buy something new!!!!!)

Will-narayan (Jun 18, 2018 at 0:37)
@bapaul: By design, do you mean style ? Or function ? Cuz' pulling on the struts could make the rotors weaker. Maybe my reasoning is wrong but I tend to think that an object is quite often stronger in compression than in tension. Also, I guess the struts are angled so that it sort of counter-acts the braking vector force, the force goes through it longitudinaly rather than lateraly, or something like that.

DC1988 (Jun 18, 2018 at 1:04)
@freeriderayward:
I bought a 2nd hand bike a few years ago and it had a 9" rotor on the front, that was the definition of on/off braking with zero modulation! Funny thing was that it was on a Trek Fuel so entirely unnecessary.

haroman666 (Jun 18, 2018 at 2:51)
Rotor spokes are meant to be in compression not tension. If you put it the other way round and apply enough torque to the centre of the rotor while clamping the outer edge (the equivalent forces when under hard braking) the rotor would just fold itself up. It creates an inward pulling force on the outside of the rotor.

freebikeur (Jun 18, 2018 at 6:20)
Not surprised by the 220mm. Got a Canyon 120mm 29er with meaty tires (2.4 Conti's with soft compound), the grip of the front wheel under breaking is just unbelievable... I'm 75kg with gear, 180mm rotors on Shimano XT (not DH rated but still powerfull for xc:marathon) and I really feel the rotor need to be upsized when things go wild. I can only imagine how much a fast guy like Charlie can feel about his braking on a dh 29er.

G-A-R-Y (Jun 18, 2018 at 11:29)
@bapaul: You don't need to be a mechanical engineer to realise the flex is because it's a 2mm thick piece of cut steel sheet and that's not thick enough not to flex no matter how you design the cutting patern. And this is all because cyclists want brakes to be light weight.

cuban-b (Jun 17, 2018 at 20:43)
@maxlombardy: without any obvious logo's i think the last resort we have is a rumored Hooli image recognition software that has yet to be released to the public. So far it can only recognize things that are hot dogs or not a hot dog.

loganm2977 (Jul 10, 2018 at 16:28)
@freebikeur: no, I responded too harshly. I finally realized you were referencing floating center lines and the fault is mine

danielsapp Plus (Jun 17, 2018 at 18:12)
Max pressure for that fork is 165psi. It is high but a lot of these guys run their suspension set up far different, commonly stiffer than standard.

joehowlett55 (Jun 17, 2018 at 22:34)
with the debonair in the new forks the psi needed to make it ride like the older models is much higher because the negitive and positive air chambers and larger

fecalmaster (Jun 18, 2018 at 3:23)
No they are already kicking ass and shitting on names. Now there are 2 more that popped up over night, expect more we on the come up. Never rule out Neko either butthole.
Post a Comment