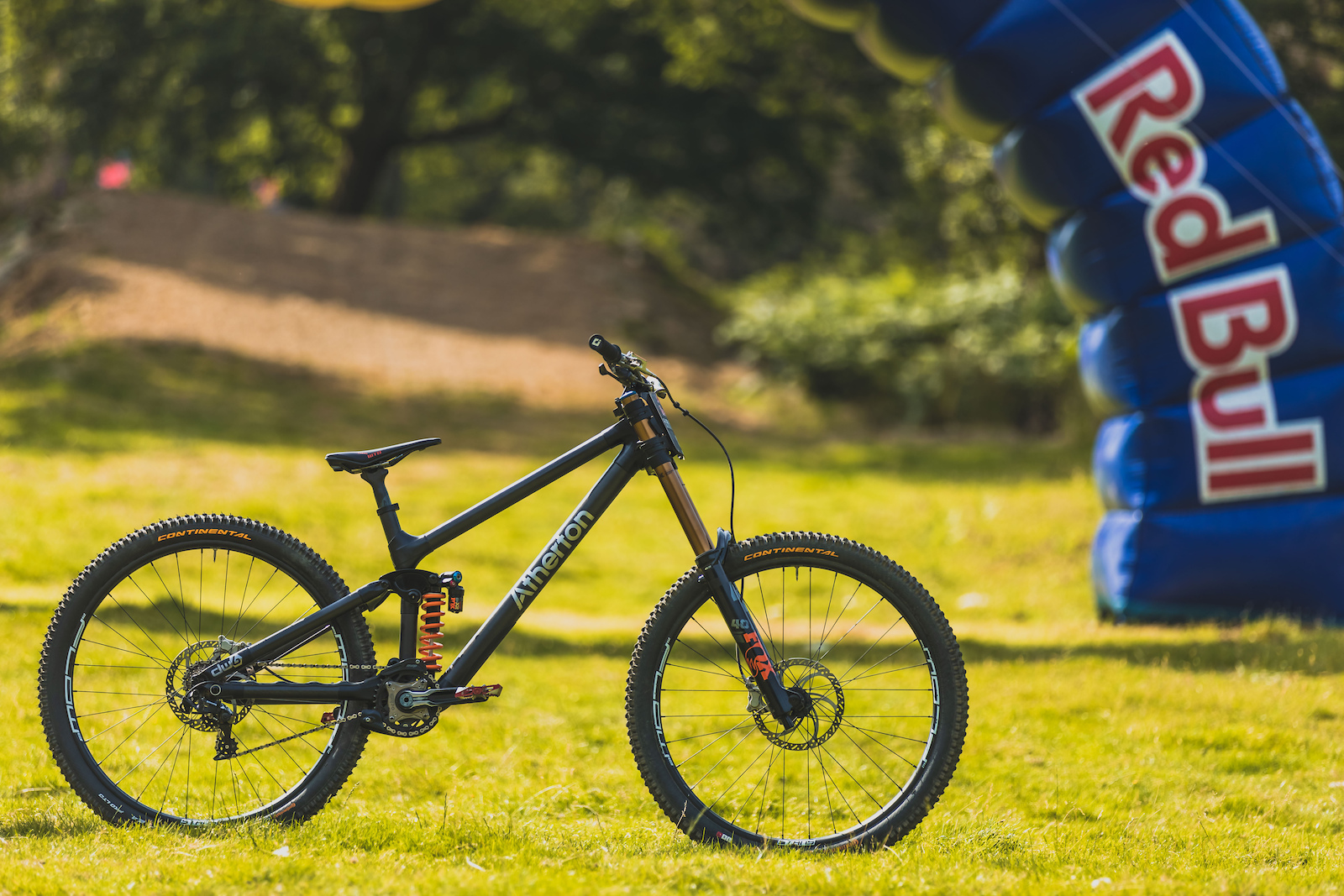 BIKE CHECK
Charlie Hatton's
Atherton Bikes DH
Photography by Dan Griffiths Courtesy of Red Bull
Coming in with the #5 plate on his bike, the young Atherton Racing ripper Charlie Hatton was one to watch at Hardline. He unfortunately crashed out the day before finals and couldn't ultimately race, but he showed us what he's made of and we know he'll come back stronger.

Charlie did say in an interview last year that his main goal going forward is to be more consistent, so when he does achieve that goal, we'll know to watch out. With a 15th place at Leogang before crashing at both Les Gets and Hardline, he'll be breaking into the top 10 at the World Cup races as soon as he figures out the consistency formula on his Atherton DH bike.

Unlike Gee Atherton's quarry-hucking bike and Andreas Kolb's iXS Test Cup mullet version of the same bike, Charlie has his set up with 29" wheels front and rear. Let's check it out. 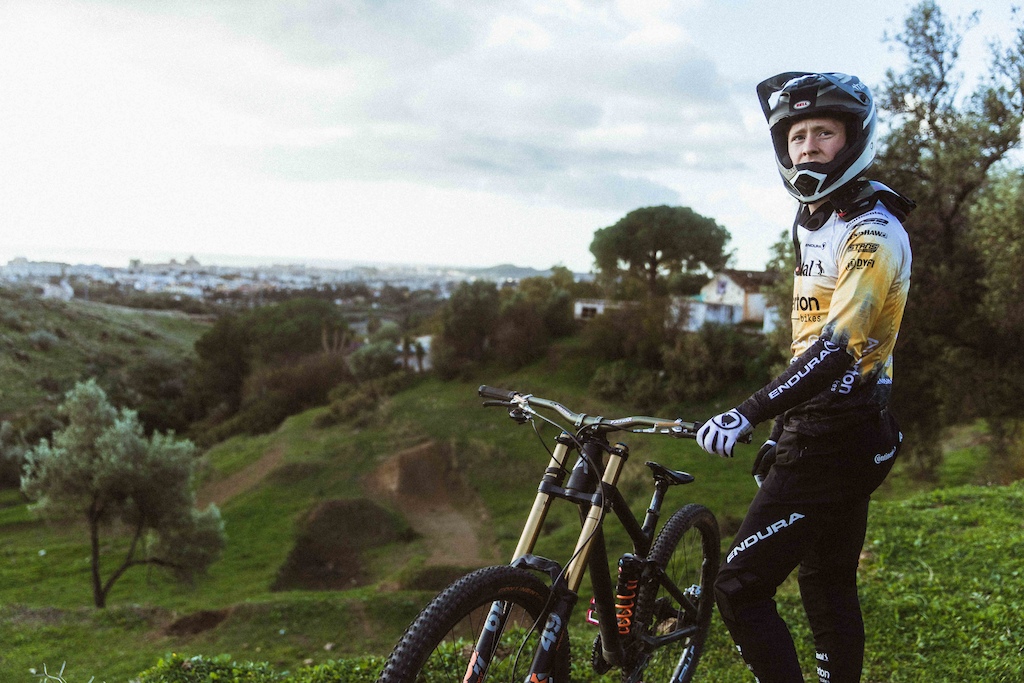 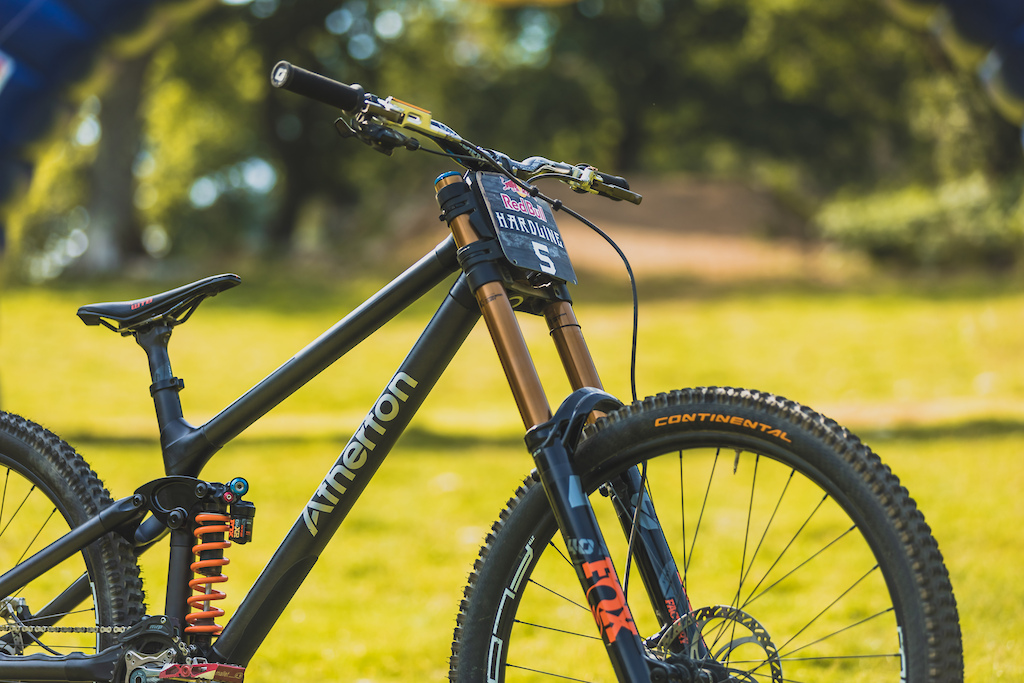 One of the Atherton Bikes' greatest strengths is the way each rider can test and tweak a bike's geometry until it suits their needs exactly, made possible by the unique additive manufacturing process and custom tubing. 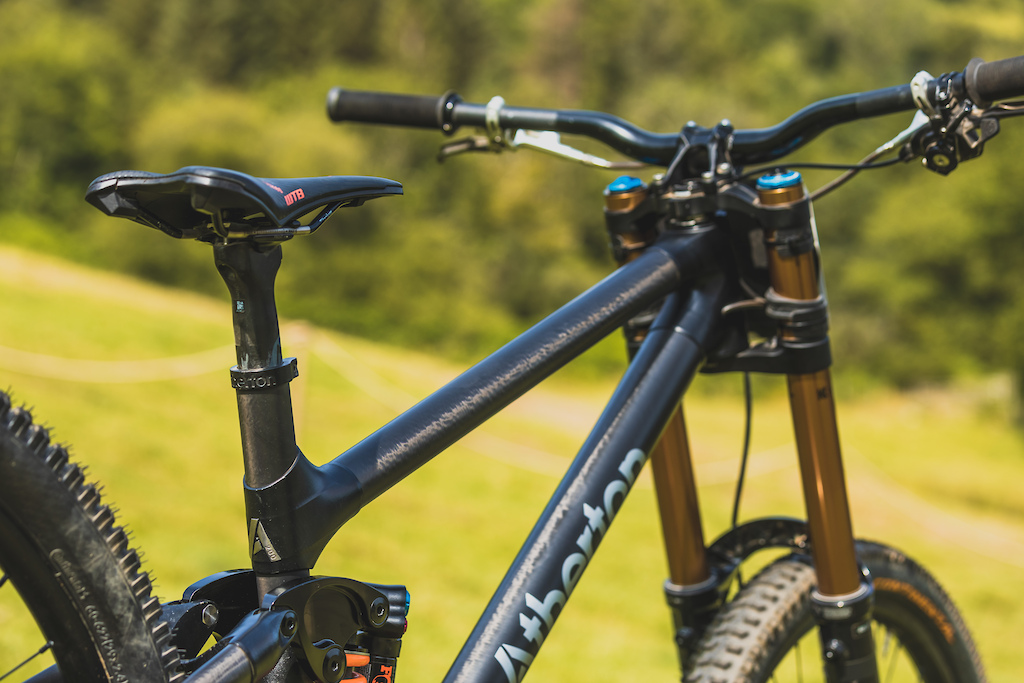 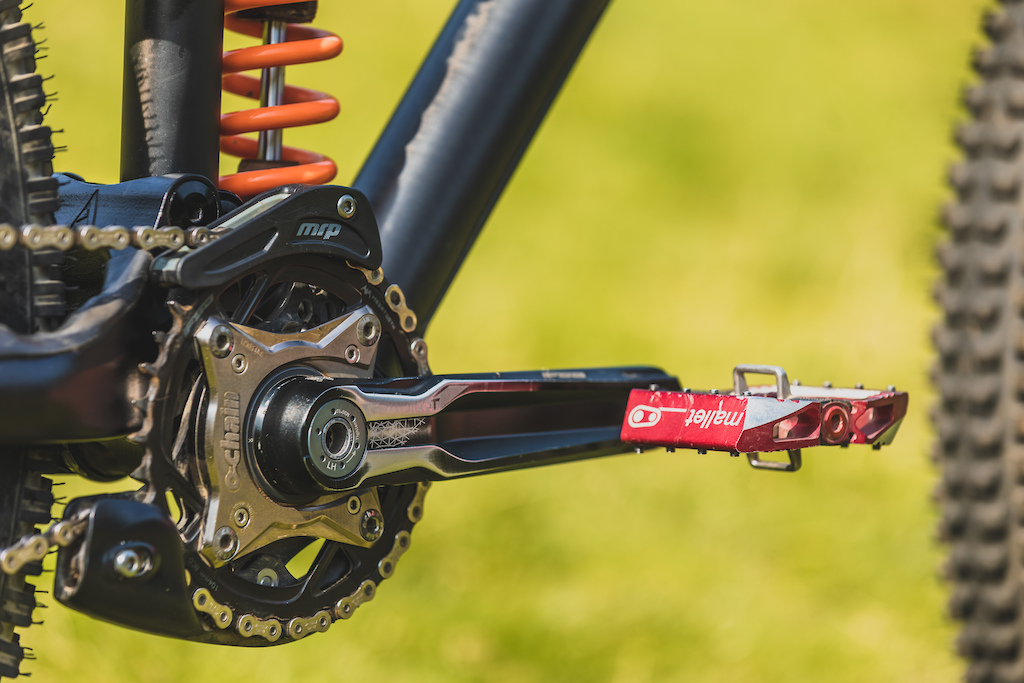 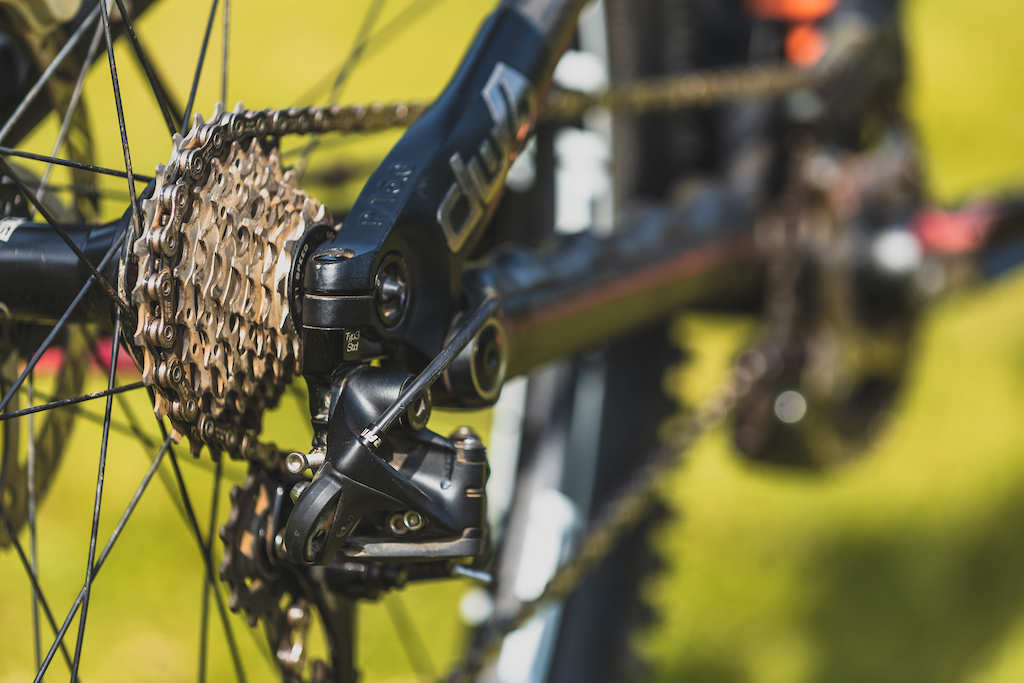 Charlie's drivetrain is a mix of SRAM and FSA. He uses an XO derailleur and shifter paired with a chainring, cassette, and 11-speed eMTB chain from FSA, as the K-Force cassette has been reduced from 11 to 7 speeds. He's also running the O-Chain 'active spider' that's been popping up on more and more athletes' bikes this season. 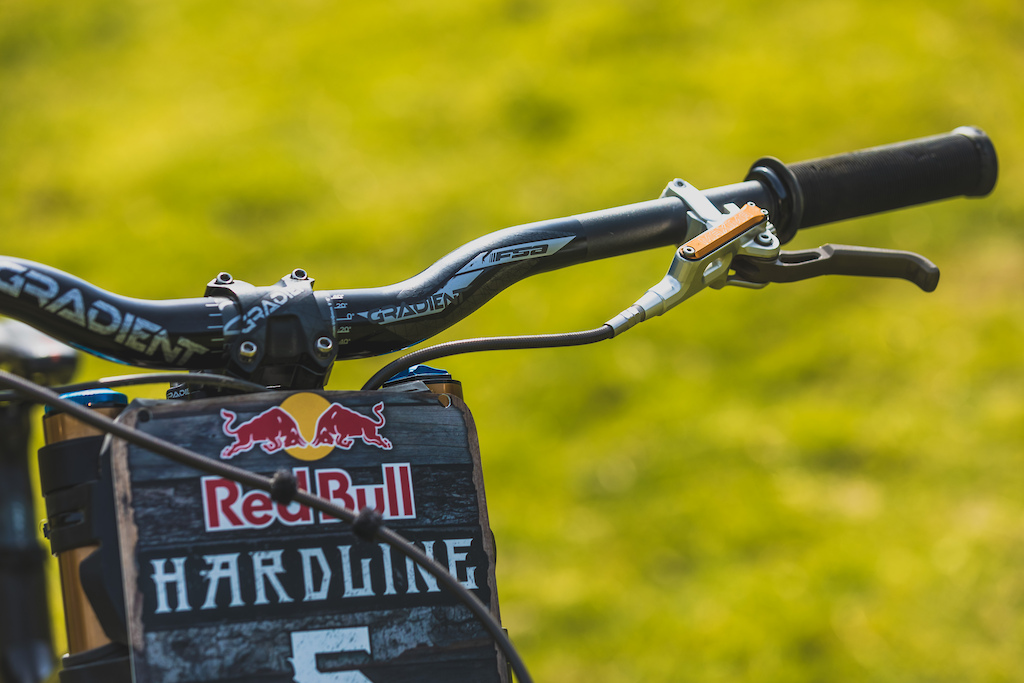 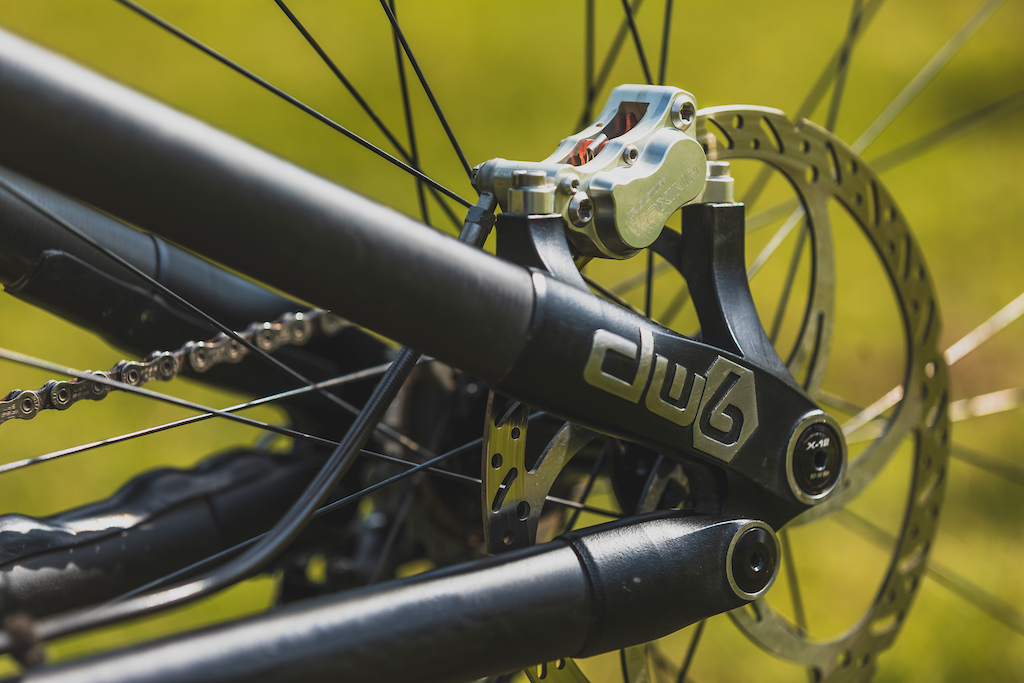 Trickstuff says the Maximas are the most powerful brakes on the market. They may also be the most expensive, and perhaps the most beautiful. 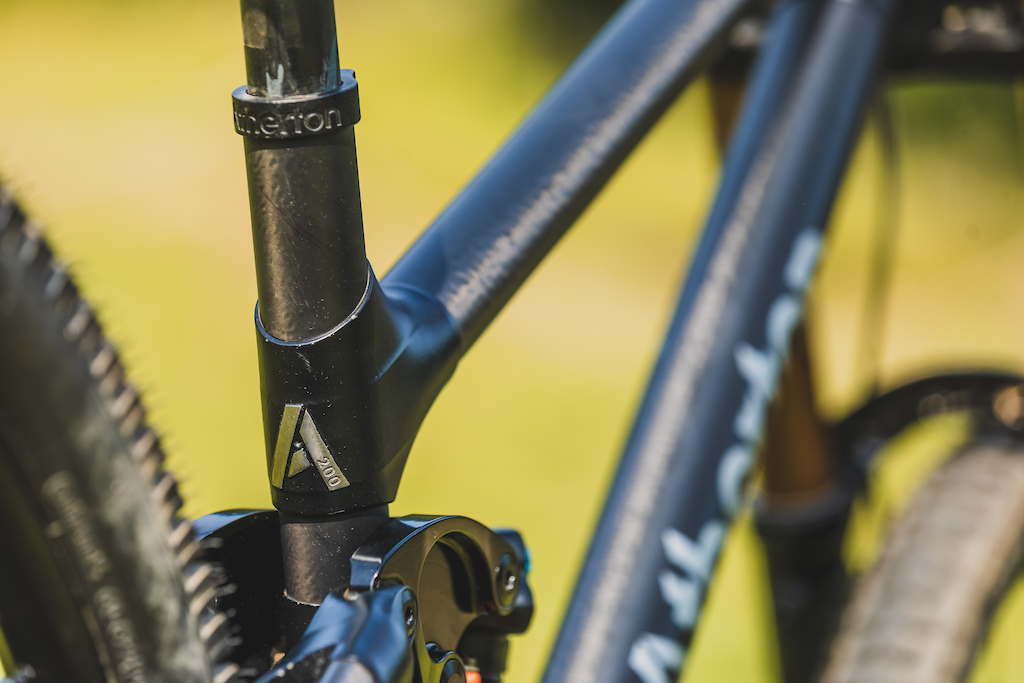 notphaedrus (Aug 2, 2021 at 14:34)
@diggerandrider: what bike have you got it on? Do you notice the extra dead zone before pedalling?

stormracing (Aug 2, 2021 at 17:05)
@diggerandrider: think I’m going to try one as soon as it’s back in stock! I ride flat pedals and Onyx hubs.. granted I know that my choices are what’s not helping me out with kickback and my feet all over.. I feel like some o chain might be the answer to helping out!

Simosis (Aug 2, 2021 at 17:28)
@CM999: I don't have one, but I would assume it's consistency. With a lower engagement hub you can have anywhere from 0 to X degrees before the chain starts pulling. The o-chain presumably always gives the same amount since it's not rotating until the chain pulls.

Mtmw (Aug 2, 2021 at 17:42)
@CM999: A low pickup hub allows your suspension to operate without pedal feedback once, until the hub engages. The elastomer in the ochain allows you continual movement within the tolerance of the elastomer the whole way down the mountain. So the difference on a 5k foot descent is mitigated pedal feedback for 1 second (hub) versus 40 minutes (ochain).

I don't own one, haven't ridden it, and can't endorse it. But that's my understanding of the functional difference.

tacklingdummy (Aug 2, 2021 at 19:33)
@diggerandrider: But how is the rear suspension? The biggest draw is that the O-Chain has less or no pedal kickback allowing the suspension to work better.

andymcrod (Aug 3, 2021 at 2:08)
@CM999: It is a pertinent comment! Also... don't forget that wheel is spinning.. you can hear a ratchet during downhills, right? so it means that chain is loose (no forces from chain to suspension since angular velocity of wheel is much higher than angular velocity of cassette driving by chain from suspension action). So what is point of this device? Will it work only during zero speed landings?

Am I right guys?

danielfloyd (Aug 2, 2021 at 12:08)
I know I can't afford one now, but someday, I hope these bikes become more available to the general public. They look so nice.

read our first customer reviews on the site..

danielfloyd (Aug 3, 2021 at 8:04)
@continental-atherton: thanks for the info!! I didn't see this on your site before. Guess I should've looked closer. Definitely tempting, though I'd have to take out a loan hahaha.

SATN-XC (Aug 2, 2021 at 15:37)
Out of curiosity....how much does it cost to get Atherton to build a bike? Website is pretty silent on the issue (and since I'm not in the market, I'm not going to waste my time (and theirs) calling)

jaame (Aug 3, 2021 at 0:55)
@enduroNZ: I think they are comparable to any top brand. £3500 for a frame and shock puts them in the usual ballpark (more than I would ever pay for a frame unfortunately)

Steventux (Aug 3, 2021 at 1:58)
Structurally it looks like a bolt together accessible handrail, but somehow still a very very good looking bike.

hamncheez (Aug 2, 2021 at 12:20)
freaking everyone is on those O chains. I hear they work great when paired with low engagement hubs!

hamncheez (Aug 2, 2021 at 12:22)
Sarcasm aside, that actually does make sense. With low engagement hubs, its not quite the same drag-free experience, as the chain is still being pulled and moving from a static chainring. In this application, the actual chain movement is being reduced.

mtbtrekracer (Aug 2, 2021 at 16:59)
TBF, ive actually gone back to lower engagement hubs as the pedals feels much more free'd up and less kick back for sure.

downhiller900sl (Aug 2, 2021 at 23:36)
@hamncheez: the lower the engagement hub you have, the more freel9the suspension can move without making pedal feedback. Adding an ochain just increases this characteristic.

But still, a low engagement hub doesn't quite give the same effect as this O ring.

betsie (Aug 3, 2021 at 7:28)
Stunning looking bikes but.... comes with a hefty price tag and my fingers would still squeeze my brakes too much and I would not go any faster.

hmstuna Outside+ (Aug 2, 2021 at 19:59)
I've seen a lot of your comments and I feel like you lack the ability to understand nuance. Is it purposeful?

zyoungson (Aug 3, 2021 at 0:16)
@hmstuna: You can choose to be anything you want on the internet. Some people choose stupid.

hmstuna Outside+ (Aug 3, 2021 at 18:59)
@MattP76: Clicking on links on the internet is never wise. Best practice is to copy and paste so you can vet for weird urls.
Post a Comment