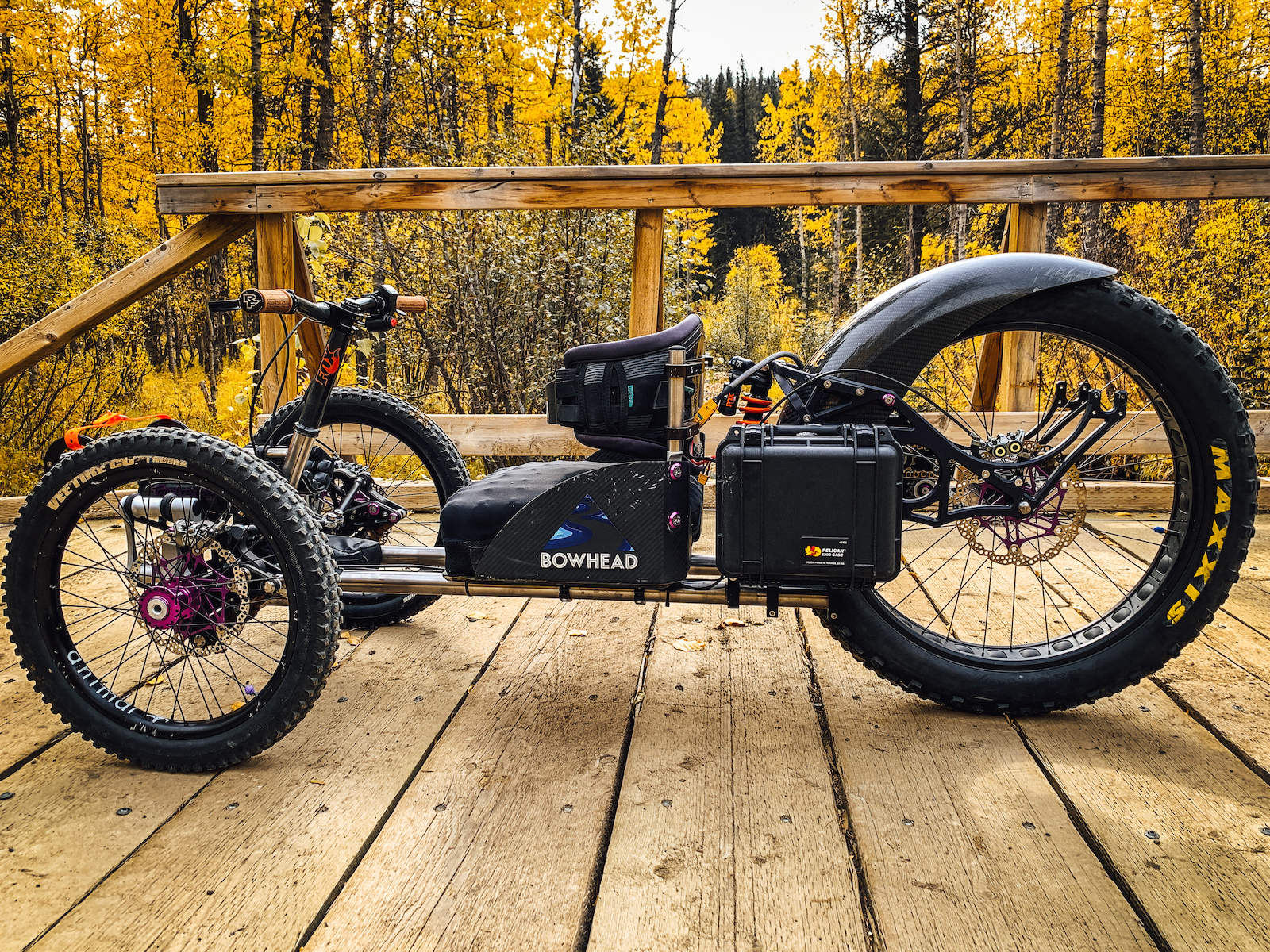 BIKE CHECK
Cole Bernier's
Bowhead Reach
Photography by Bowhead
You may be familiar with Cole Bernier's name from Remy Metailler's recent video at Big White Bike Park. In it, Metailler chases Bernier down some of the bike park's gnarliest black diamond tech and jump trails at serious speed. We were curious about Bernier's three-wheeled adaptive mountain bike, so we decided to do a full bike check on it.

The company that makes the bike that Bernier rides is called Bowhead, which is based in Calgary, Alberta, Canada. The founder of the company, Christian Bagg, was injured in 1996 while snowboarding and paralyzed from the waist down. He starting inventing his way around the challenges he faced and building adaptive equipment. What started as a way to solve his own problems grew into a company that allows others experience the outdoors.

Bowhead offers several different models which are available globally, including the bike park shredding Bowhead Reach that Cole rides. However, each bike that is sold is built to order by Bowhead's team 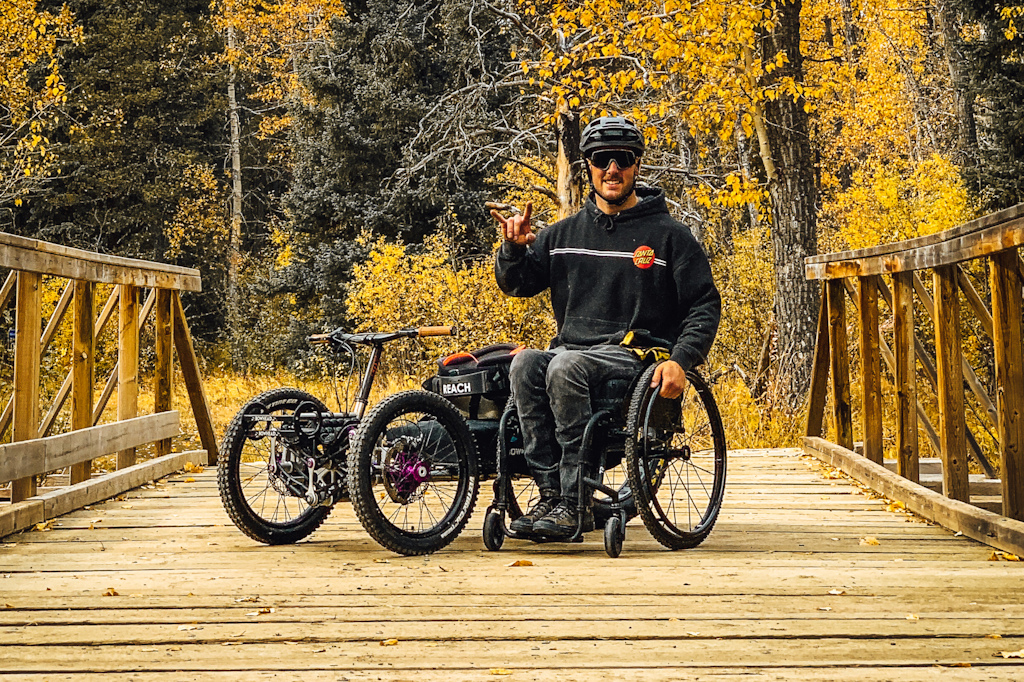 Rider Name // Cole Bernier
Age: 28
Hometown: Williams Lake, BC
Height: 6' / 183cm
Weight: 185lbs / 84kg
Instagram: @cbreezy614
of engineers to cater to different requirements and preferences. For example, there is a quadriplegic option where you use your elbow to brake and twist your wrist to throttle.

The base model is $14,900 USD, but can cost up to $18,000 USD on a bike with as much carbon and titanium as Cole's bike. Bowhead says they're working on a lower cost model, but ultimately build the bikes to be the highest spec possible and don't cut any corners. 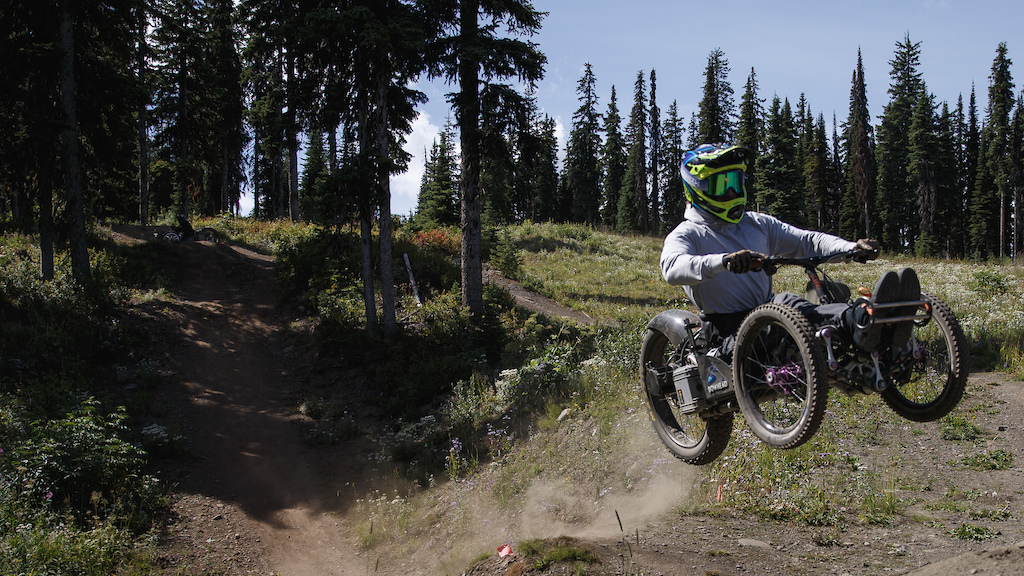 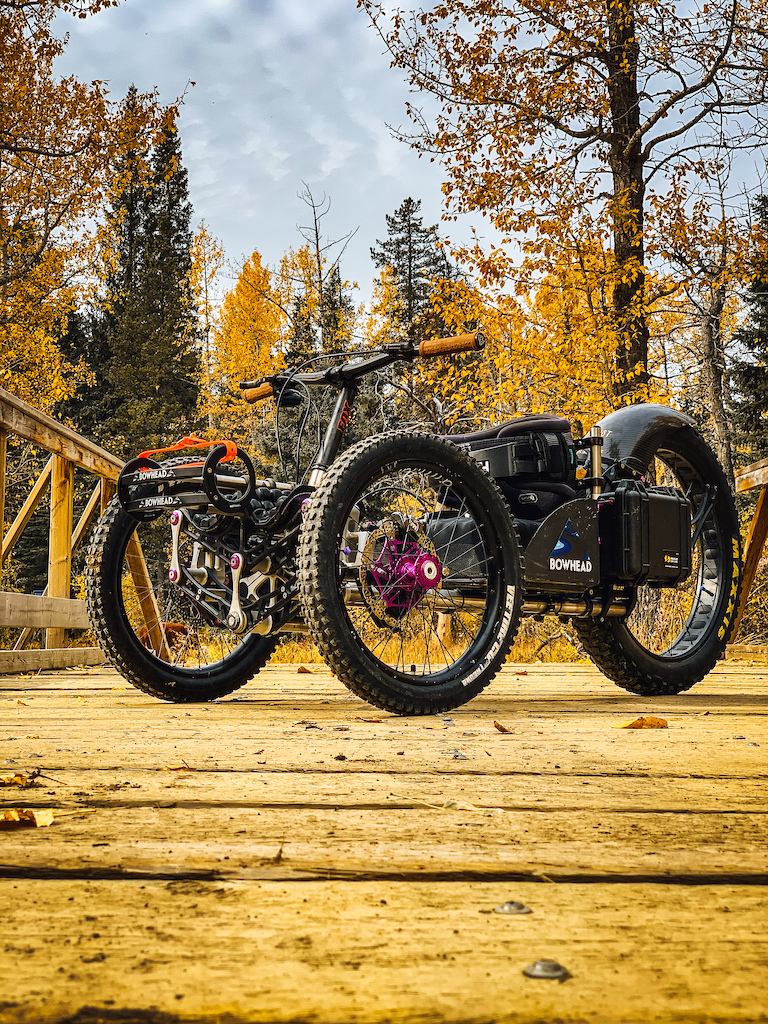 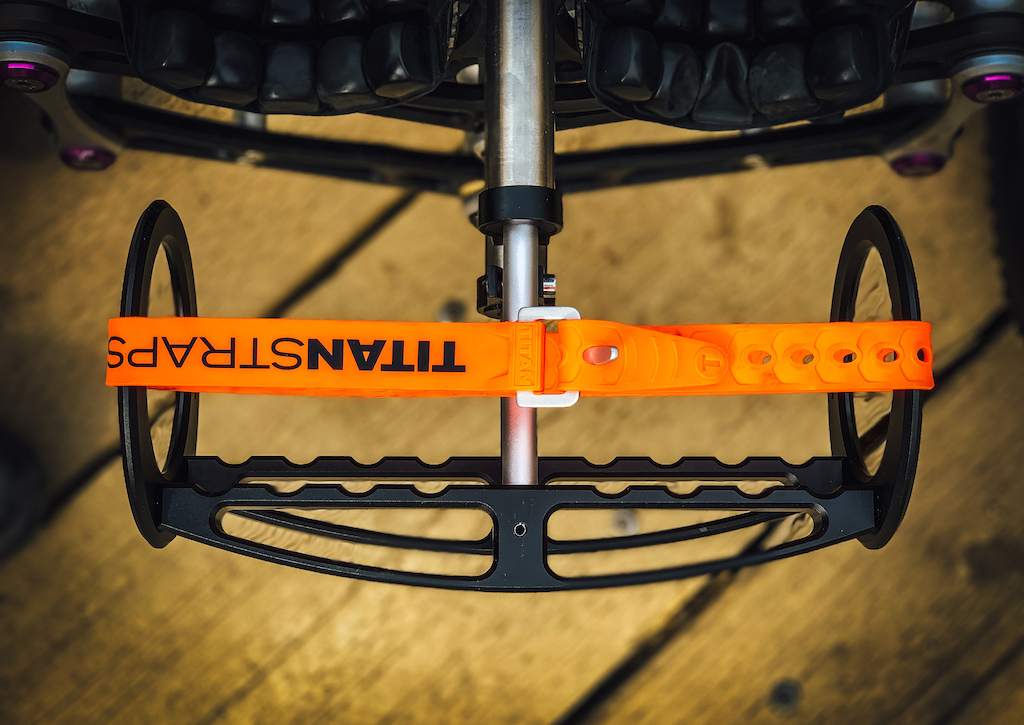 Bowhead offers Ti or Stainless Steel rails and Bernier's bike is built up with the Ti rails. Weight isn’t really a factor with the powerful motor, but Ti is stronger and more comfortable when sending it large in the bike park. 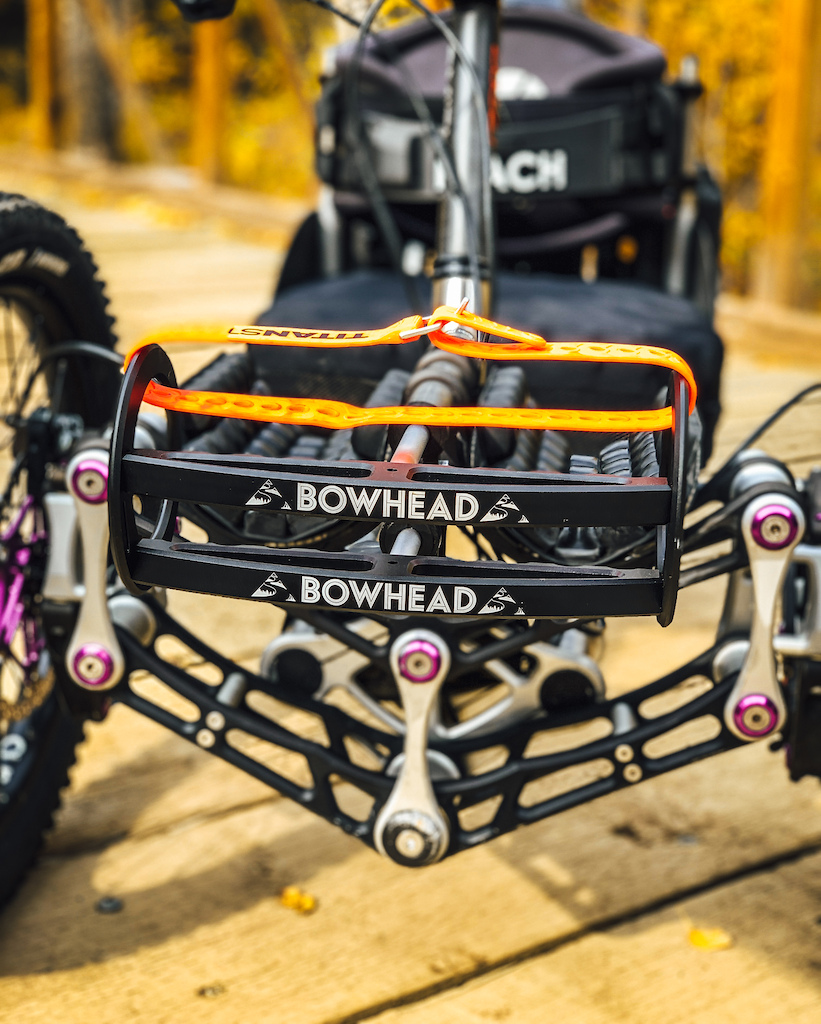 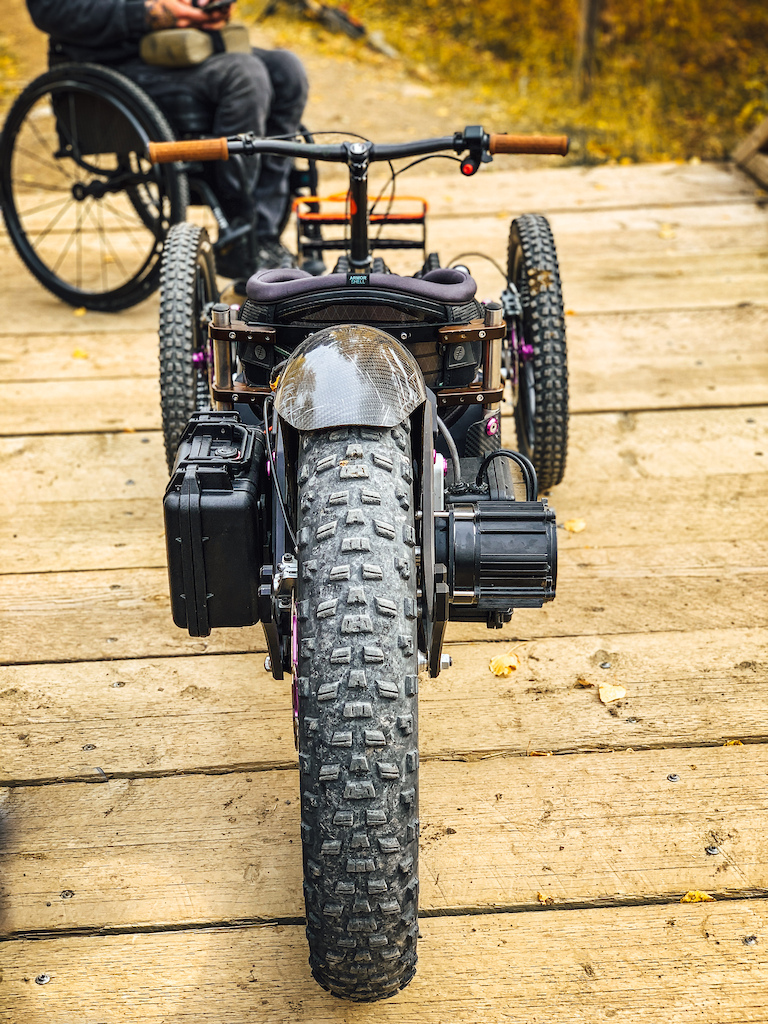 The articulating front end of the bike means you can stay level on up to a 30 degree slope and carve into a corner. 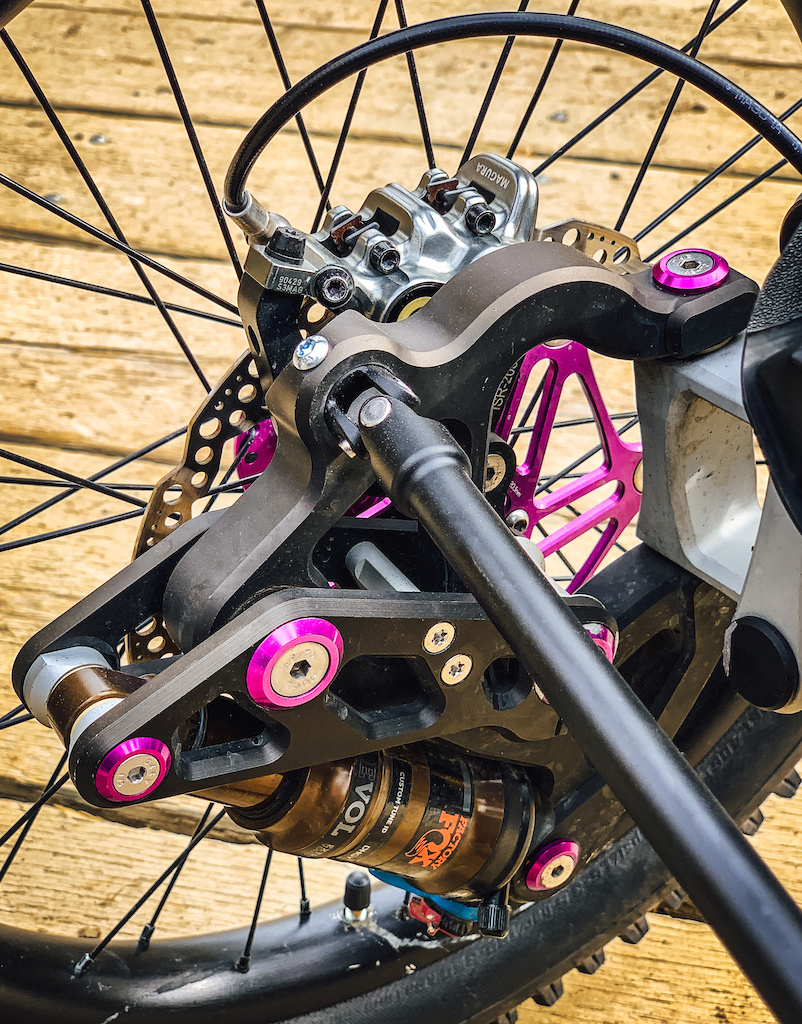 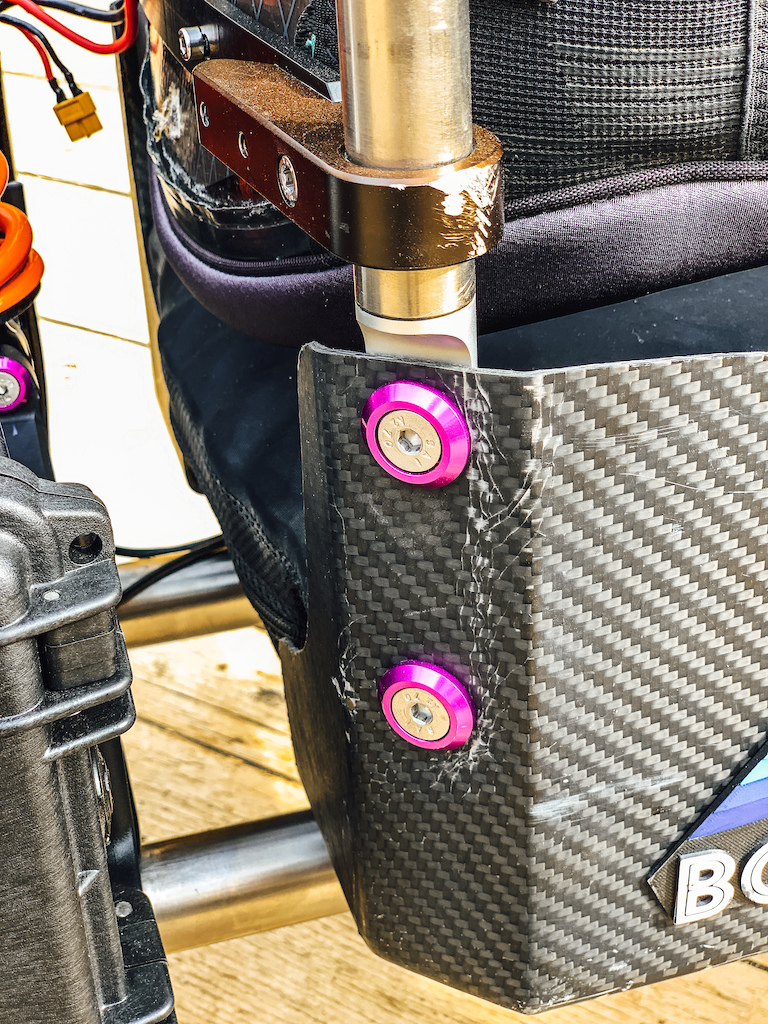 With square edge hits, the front suspension has a maximum travel of 82.55mm. However, because of the articulation in the front end, Bowhead says the effective travel can be as much as 203mm. 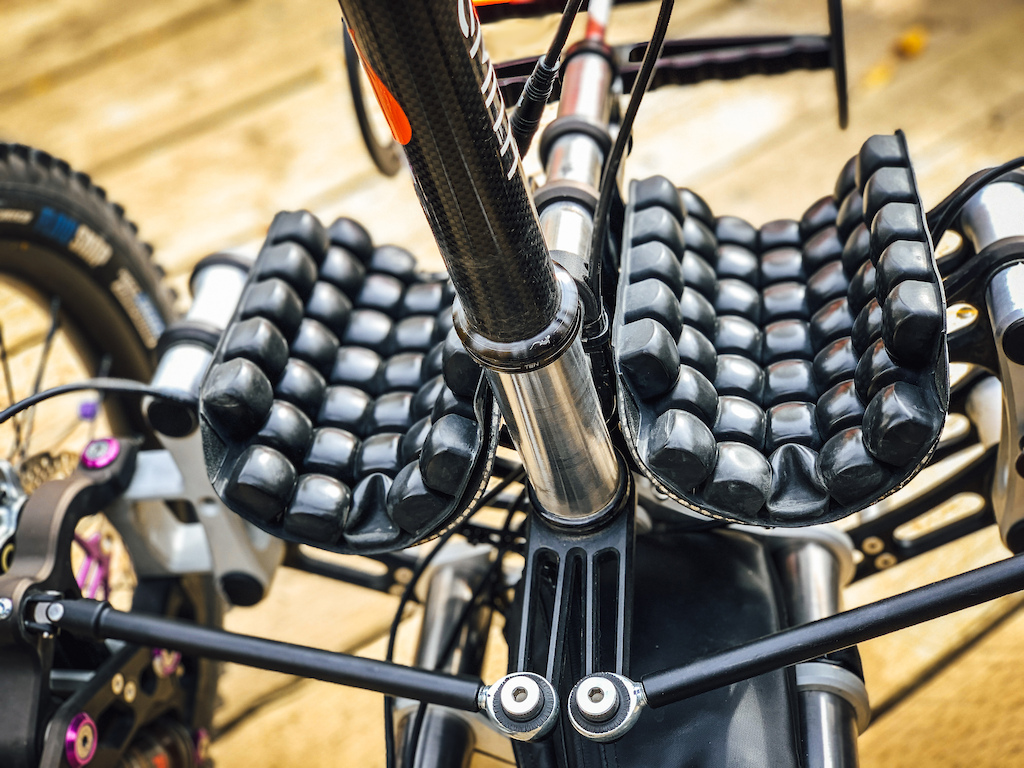 The lifty stops the chairs early to help Cole get the bike on and off the lift. He pulls up parallel to the chair, unbuckles, and transfers into the chairlift. Then the lifty puts the Bowhead on the chairlift as it fits on the regular bike rack at most bike parks. 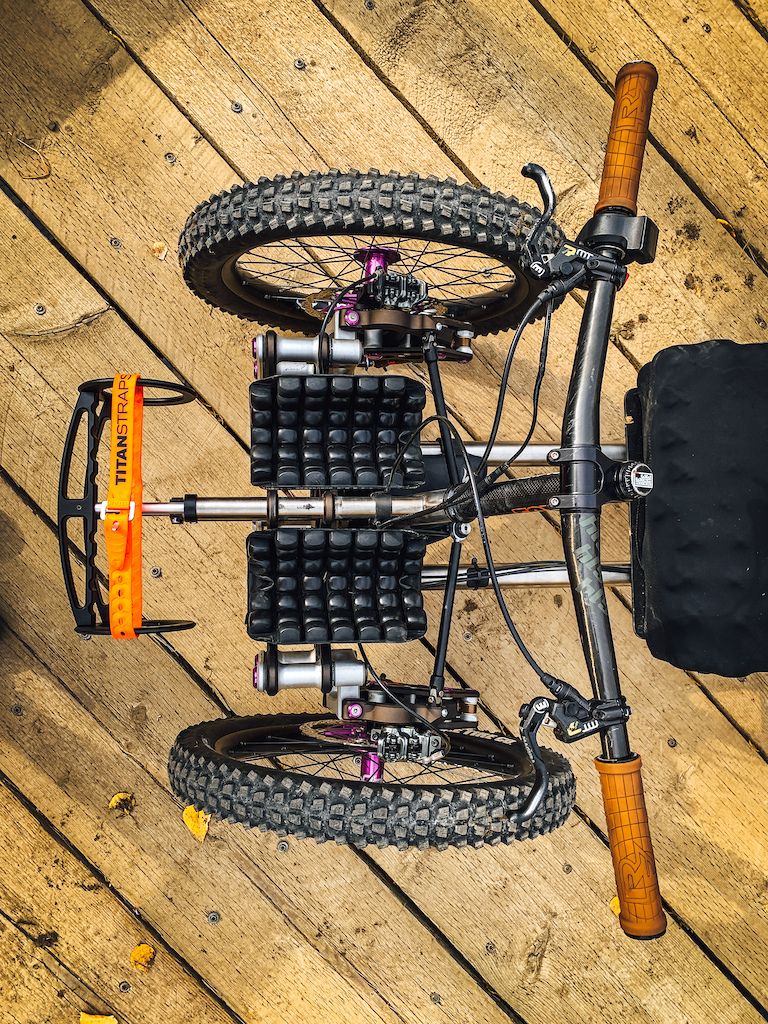 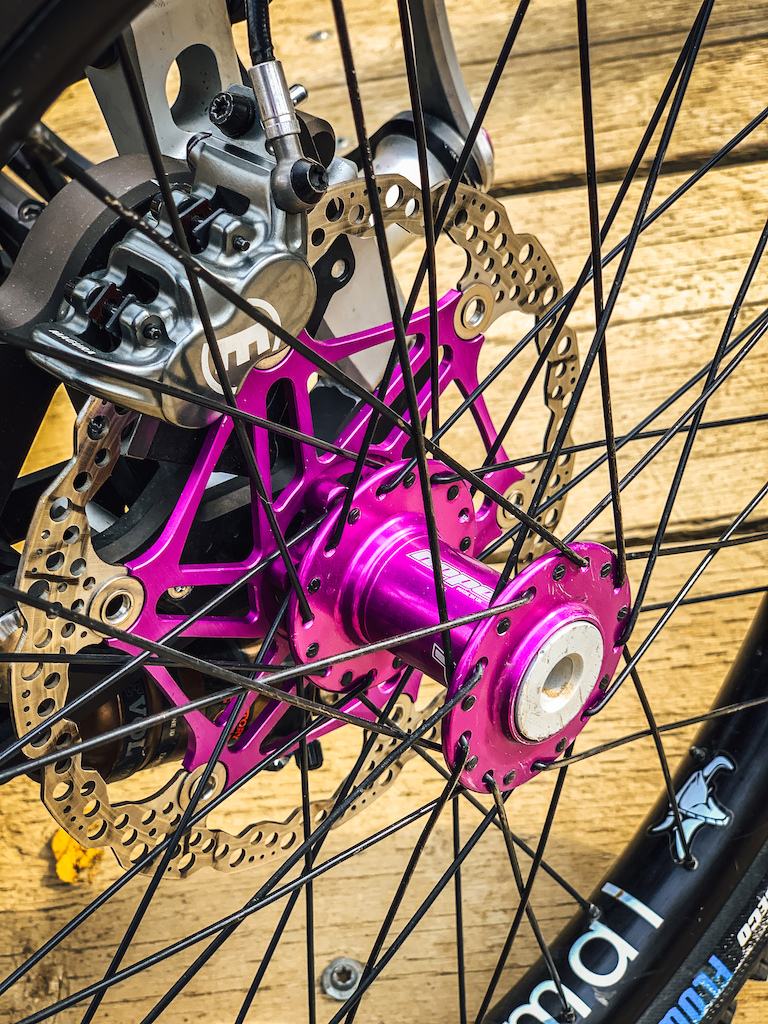 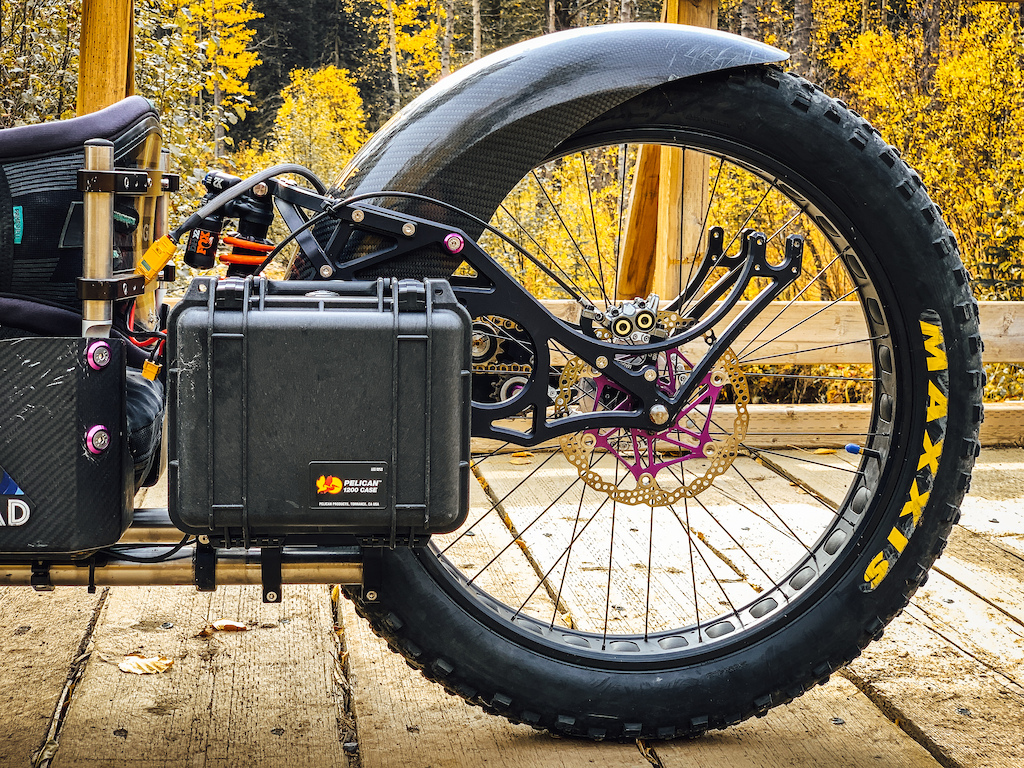 There's a carbon composite rear fender and a single speed drive train. The Pelican case holds the big batteries for the 3000 watt motor and the odd sandwich. Cole uses a thumb throttle to operate it. The bike uses a half link Shadow Conspiracy chain with an idler to provide chain tension and a 13t to 40t combo. Bowhead produces their own rear hub and sprocket for reliability and to take the bike's higher torque. 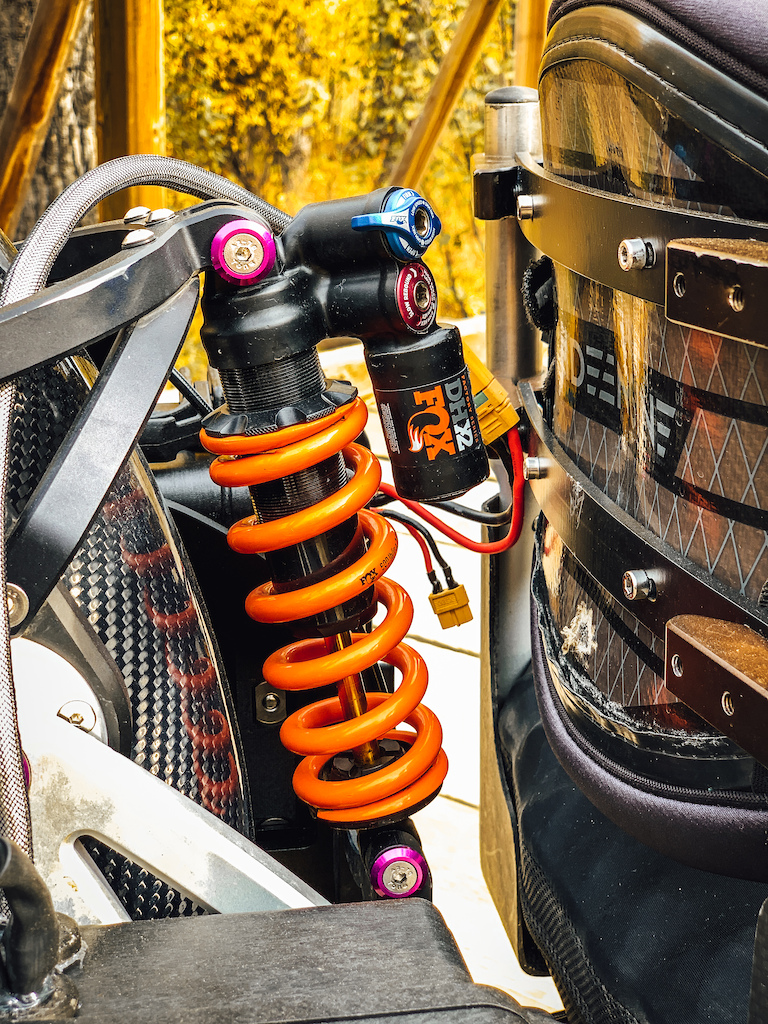 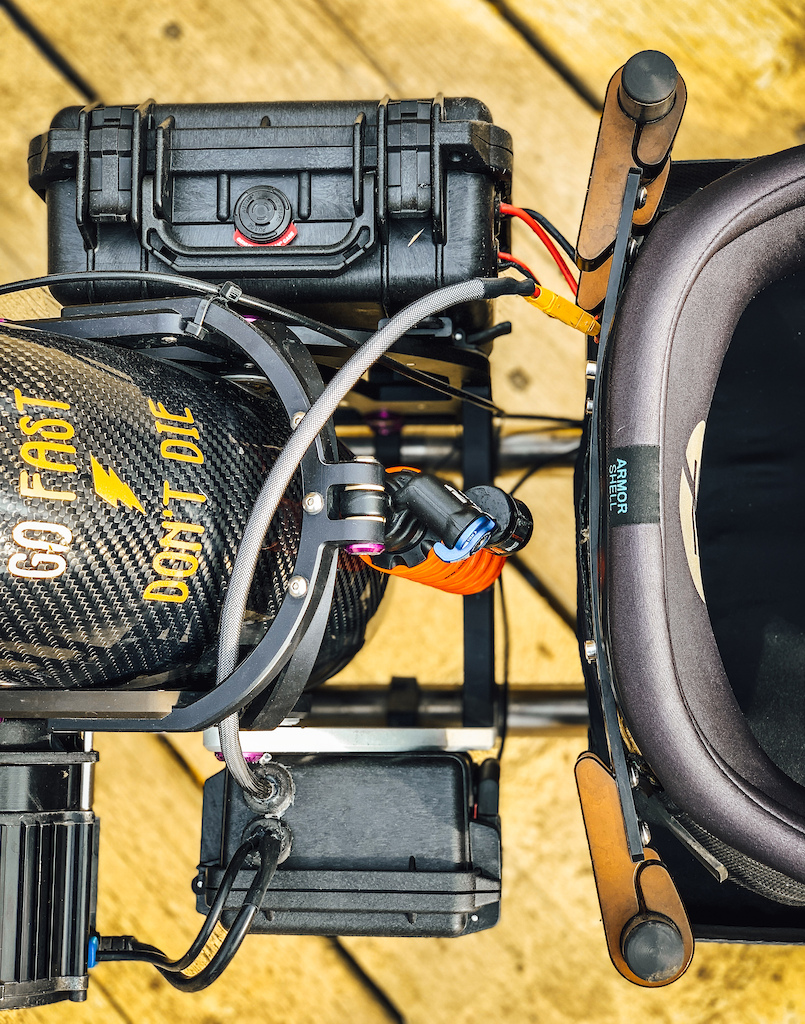 Cole uses a Fox DHX2 coil in the rear with a 600lb spring and runs the rebound in the rear nice and slow so he doesn't get bucked when jumping. 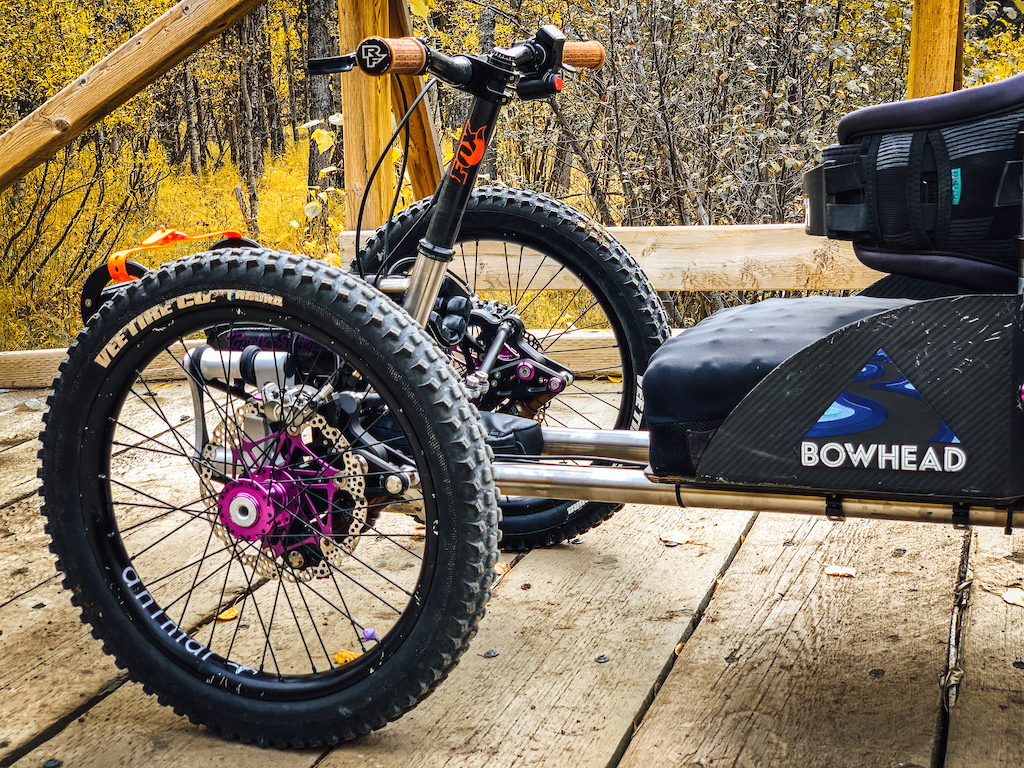 The bike uses a 26” fat bike rear wheel and 20” front wheels on BMX rims. All the wheels are hand built in house at Bowhead. Cole is running RS Animal BMX 20” rims 36 hole with Purple Hope Pro 4 hubs and rotors to match. He has a 26” x 4.80 Size EXO TR 20 psi Dual Compound Maxxis FBR on the rear and 20” Gravity Flow Snap tires up front. He runs 8-20 psi in the rear for traction and braking benefits. The front tires take the brunt of the impacts when riding so he tend to run higher pressure, up to 30 psi. 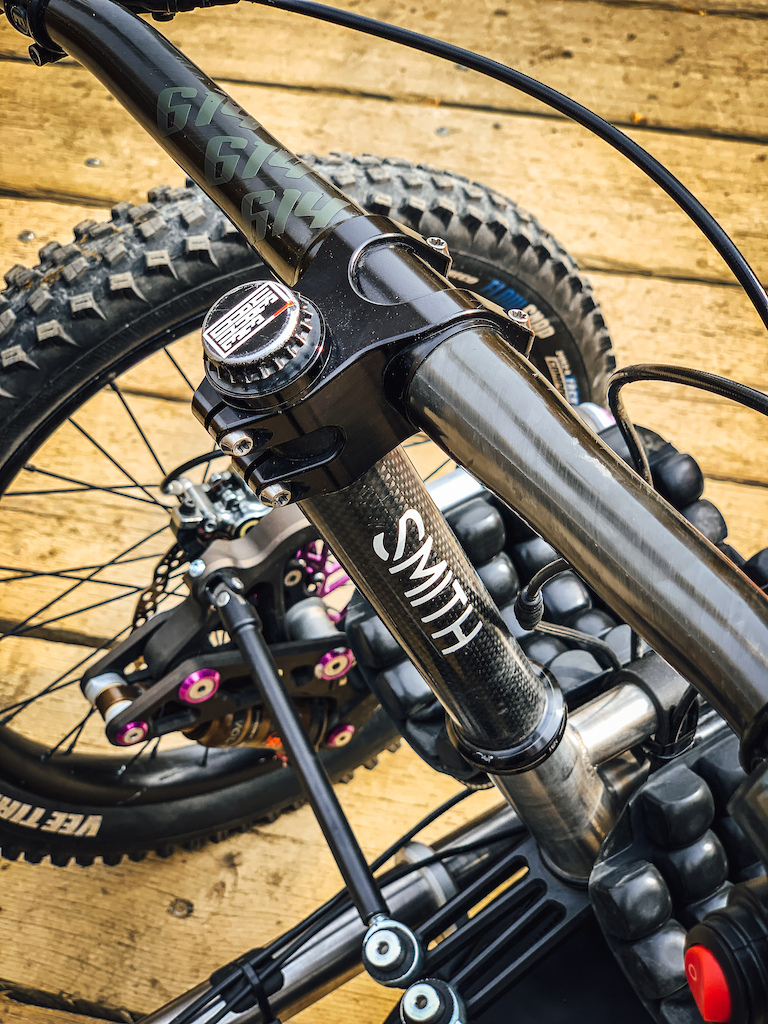 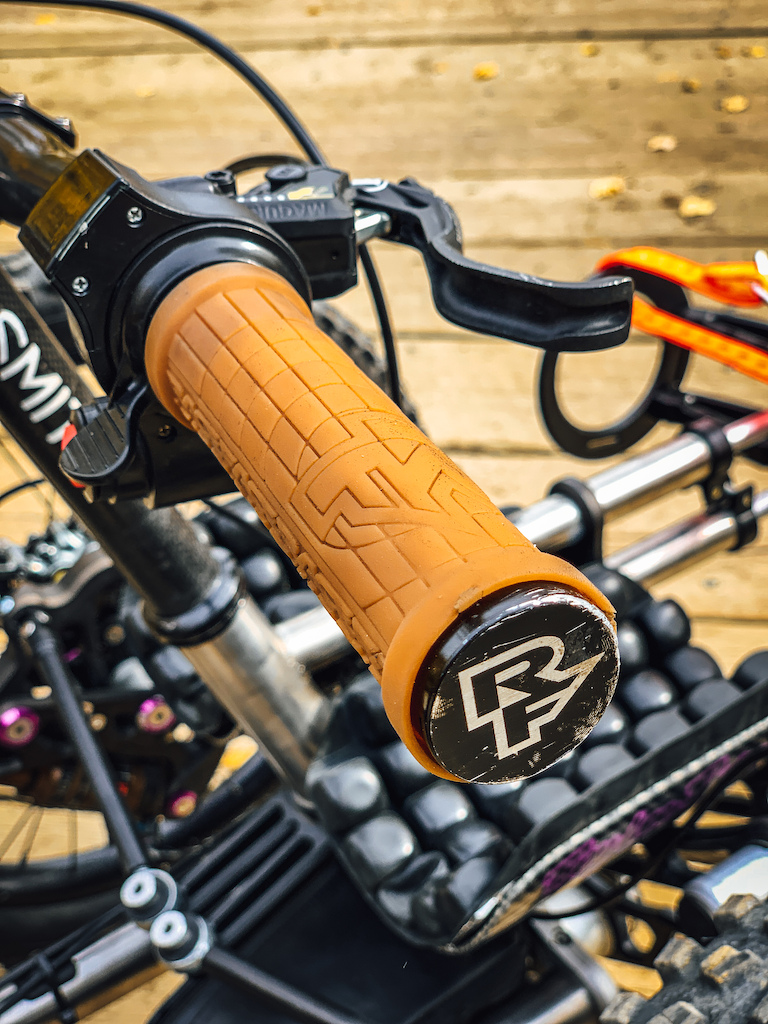 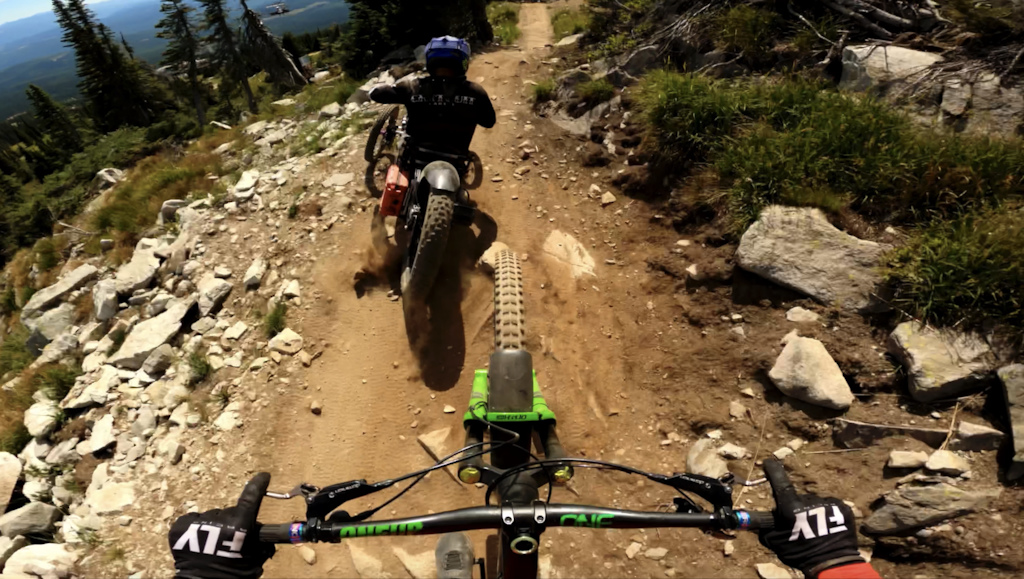 remymetailler (Dec 11, 2020 at 9:54)
Cole is one of the nicest guy I met, and he is super talented at riding his bike. Could not believe how precise he was when I followed him. Great bike check! Stoked to see more adaptive bike content.

nikifor88 (Dec 11, 2020 at 10:09)
as always when bowhead article comes up... www.gofundme.com/f/mountain-bike-for-quadriplegic-freerider sorry guys, but I just have to

thx for any support!

raysmtb1 (Dec 20, 2021 at 17:45)
If any of you know of anybody who’s looking for another Bowhead I have one for sale. It’s brand new I found I couldn’t ride it with the tilting function I have issues with my arms to. Send me an email if you’d like to discuss a deal ray@raysmtb.com

GrassWhistler (Dec 11, 2020 at 10:06)
This is sick. Would love to see Bowhead consider an adapted Reach that can be pedaled with E-assist. My kiddo has cerebral palsy and doesn't have the core muscle control for balance, but she has some use of her legs still. She has an ICE Adventure can do some light gravel riding on it, but it doesn't have the traction to go uphill, nor the handling needed for real trails.

scaredstiff (Dec 11, 2020 at 9:08)
Everything about this bike, the engineering, care, thought of the design is amazing to me. ???? Technology you beautiful son a gun, you.

PHeller (Dec 11, 2020 at 21:54)
One thing Ive be curious about are how these bikes limit impacts to the spine? Sure suspension and tires can help, but knees and legs take up a lot of sharp impacts that Id think would be directed right into the spine of a seated rider.

kcy4130 (Dec 11, 2020 at 9:15)
I wonder why they didn't go with 26" or 24" front wheels. I bet the added inertia and extra mass would have made the steering hard to control. That thing is so awesome! And the shadow conspiracy half link chain is ridiculously strong. I've had one on my dirt jumper for about ten years.

chriscarrier (Dec 11, 2020 at 9:44)
Another factor is turning circle. To keep the width down to something that fits on most mtb trails the front wheels are a lot closer to the rider than a bigger 4 wheel bike. Bigger front wheels would mean the steering has to be limited sooner to avoid wheels contacting the frame/rider.

paulwatt (Dec 11, 2020 at 10:12)
Such a sick ride. I got to meet Christian Bagg this summer, and both visited the shop in Calgary and rode Rupert with him in Squamish. I think we'll be seeing a lot more Bowhead bikes out there in the next few years, which is just amazing.

raysmtb1 (Dec 20, 2021 at 17:39)
Hey everyone! I have a Bowhead for sale. I have limited movement in my arms and I just wasn’t strong enough to ride the bike with the tilting wheel function. It’s never seen dirt I’ve only ridden it in the grass around my house. If anybody is interested I’m gonna let it go for a song. You can contact me at ray@raysmtb.com

Spokesrobbie (Dec 11, 2020 at 20:18)
Stoked to have met Cole at the BC bike show in Vancouver and ride Rupert with him and Christian. Very talented riders and all around purely kind folk.

chileconqueso (Dec 12, 2020 at 8:24)
Talk about commitment! He’s tied to his rig! Thanks for some positivity during the year that keeps serving poo sandwiches.

karl-huckingbikes (Dec 11, 2020 at 9:19)
What a machine you should be proud of that as we are proud of you what an insperation to any rider

Leglessyetti (Nov 2, 2021 at 17:34)
double leg amputee here and I’ll be doing my best to get my hands on one of these amazing beasts

raysmtb1 (Dec 20, 2021 at 17:40)
I have a lightly used one for sale if you’re interested. I bought one brand new a year ago and I found it I wasn’t strong enough do use the tilt function, I also have issues with my arms. If you have any interest send me an email ray@raysmtb.com

bowheadbreezy (Dec 11, 2020 at 13:58)
Ohhhhh trust me brotha, it may be fully electric driven but don't let that fool you. This thing is very much a workout with the Patented Articulating front end it handles just like a bike would. Turns are most definetely earned. As sore as anyone would be after a day of resort riding, such an awesome feeling!

Blackers (Dec 11, 2020 at 16:23)
@bowheadbreezy: I can attest to the workout thing, I've seen Cole riding this at Smith Creek and Silver Star, the sweat the guy generates hasn't come from standing in the sun!

BoneDog (Dec 11, 2020 at 9:12)
THE ONLY E-MTB APPLICATION I APPROVE, ALL YOU OTHER ABLE PEOPLE ARE JUST FACKING LAZY, BASICALLY A SLAP IN THE FACE TO THIS GUY.