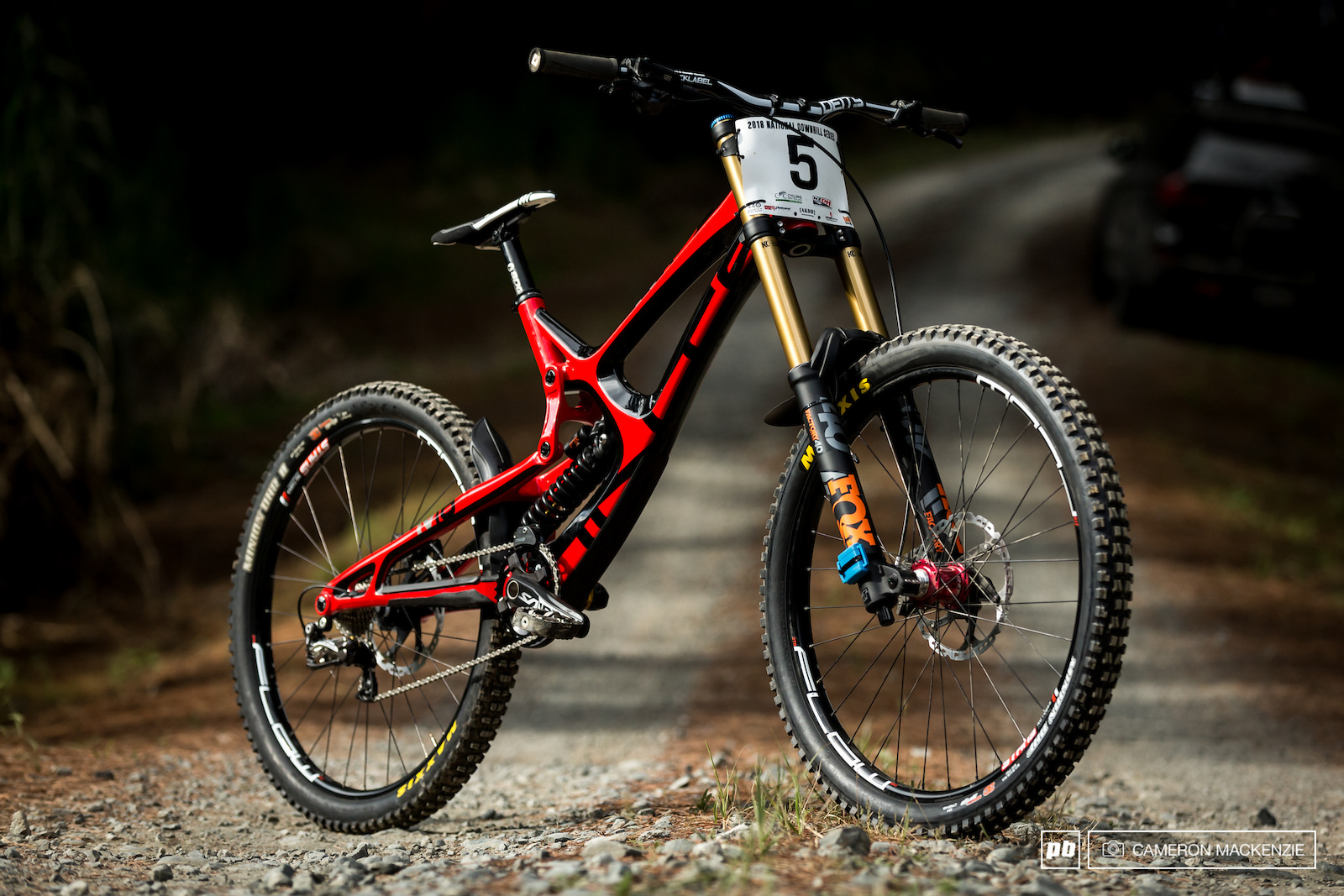 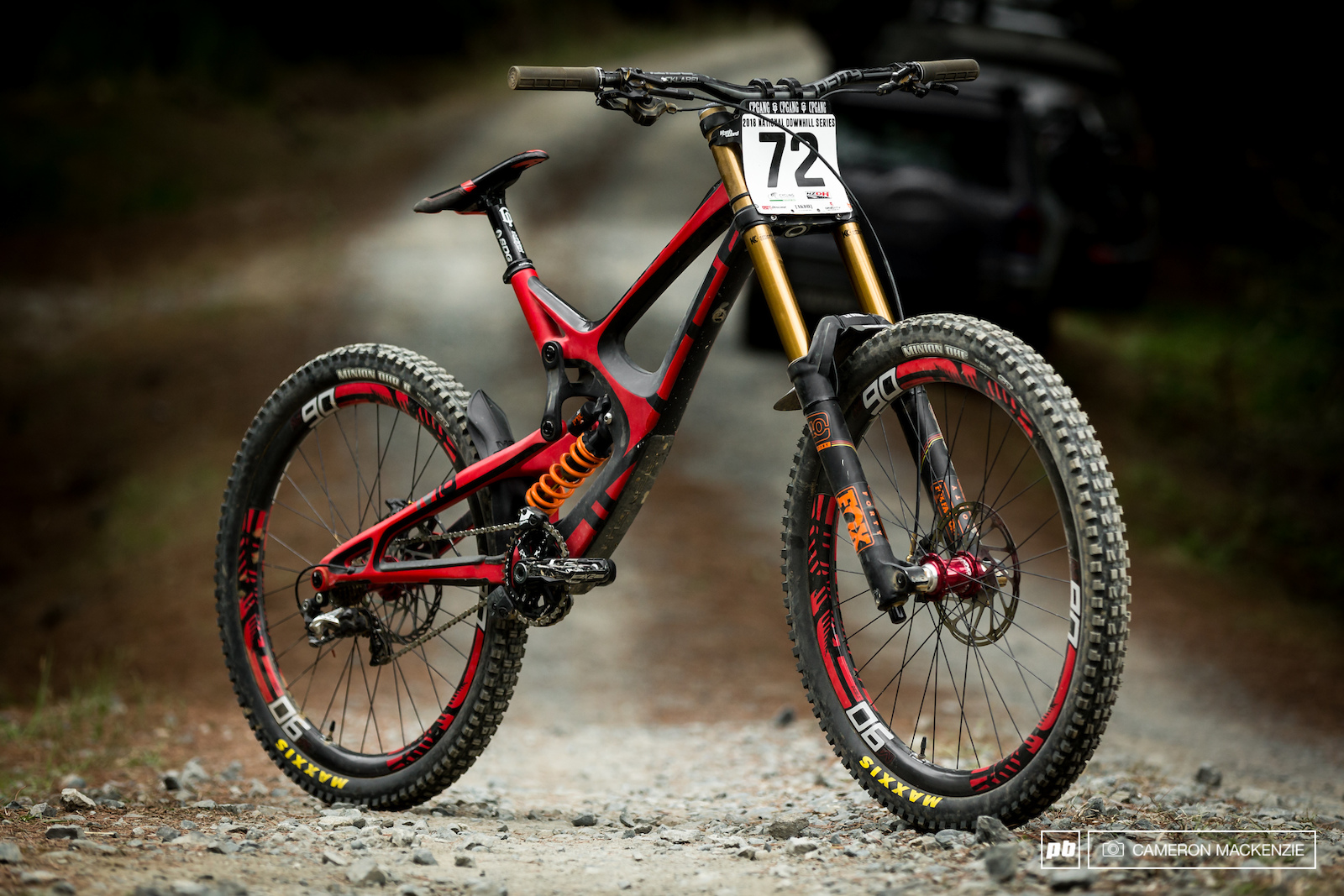 Left to Right: Cole Lucas & Sam Robbie's Intense M16's
In the left corner, weighing 80kg, we have Cole Lucas. And in the right corner weighing 74kg, we have Sam Robbie. Sam and Cole are some of the fastest Junior downhill racers at the moment. Both with a range of wins each to their names, it is of little surprise that the duo ride for the leading domestic factory team in New Zealand – Wide Open, the brainchild of ex-world cup mechanic, Matt Whitaker. Matt's team structure has long been the pinnacle of domestic teams on the New Zealand circuit and has a record for signing some of the brightest young talents. 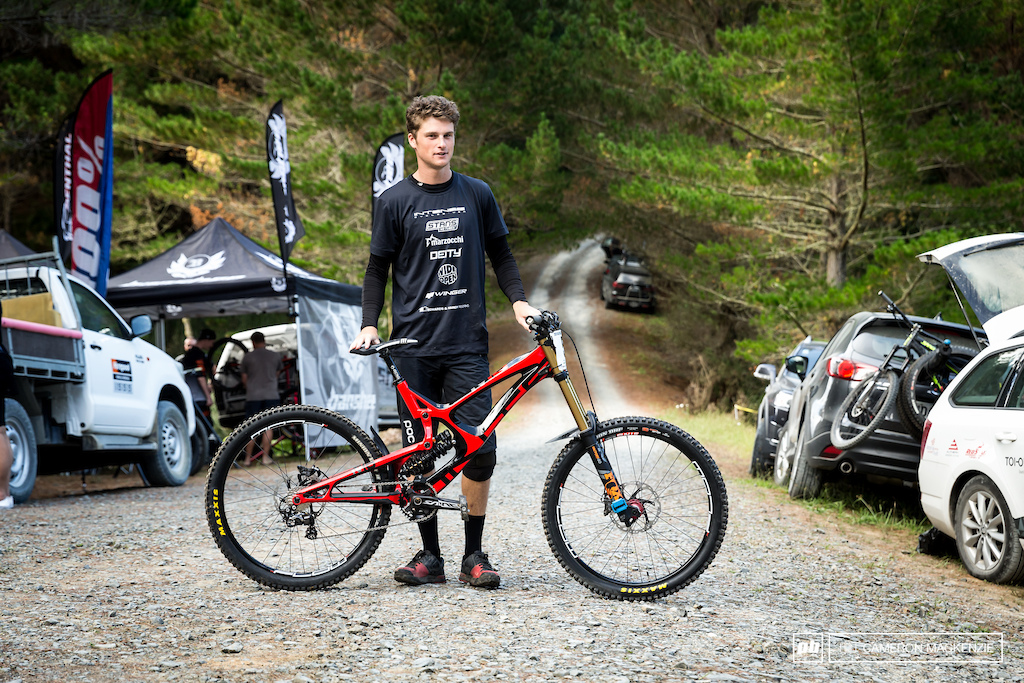 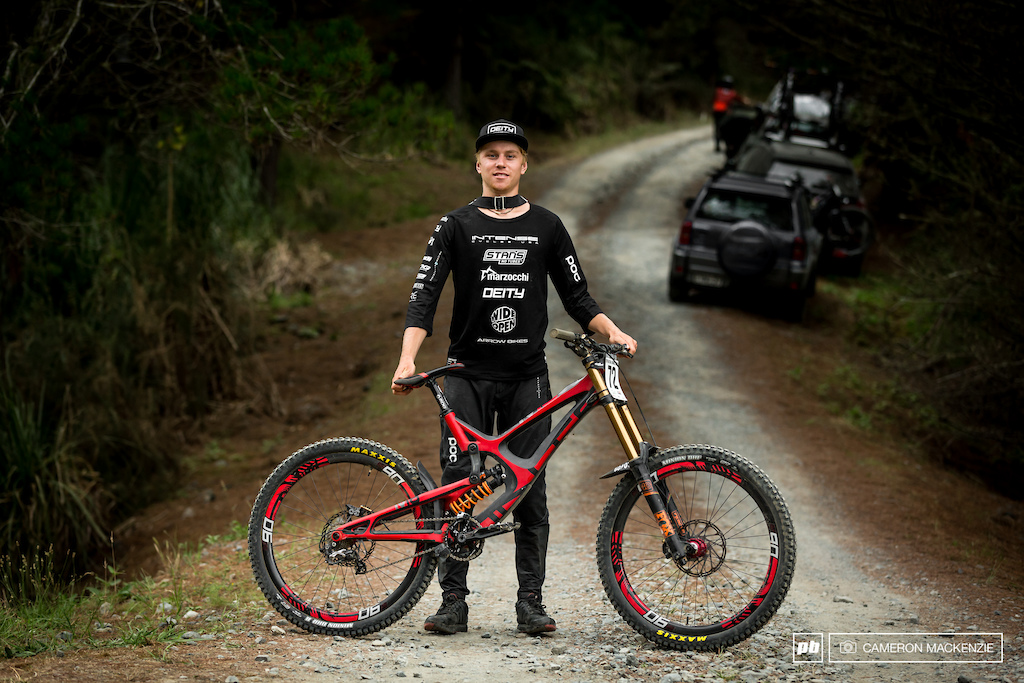 Frame and Geometry Differences
Put the lads and their bikes head to head and you'll struggle to pick out any differences in their setups that isn't related to the wheels. Still young, and caring more about going fast that twisting knobs, the pair aren't all that aware of their riding style or position on the bike. Cole, based out of Rotorua, has a very aggressive riding still while maintaining a very central and stable position on the bike. Similar to how Brook MacDonald rides. Sam Robbie, however, is based out of Queenstown so his park-rat nature is often clear to see. He's in the air more than he is on the ground with a very dynamic riding position and is found sprinting in places where others would tuck.

The teammates are both on Intense's latest M16 platform, but run different sized frames even though they are both 6'3". Cole runs an extra large frame over Sam's large. Intense's latest M16c bike features the same 63.5-degree head angle but has a 10mm difference in headtube length between the two sizes (122mm v 132mm). The reach also is different with the XL frame coming in at 452mm, an extra 16mm over the large. The pair, however, both run Deity's 50mm Intake DM stem, and 25mm BlackLabel bars. Sam runs his bars the stock 800mm width, whilst Cole cuts his down to 780mm. They both run 10mm of stack, with no stem spacers or high-rise crowns. 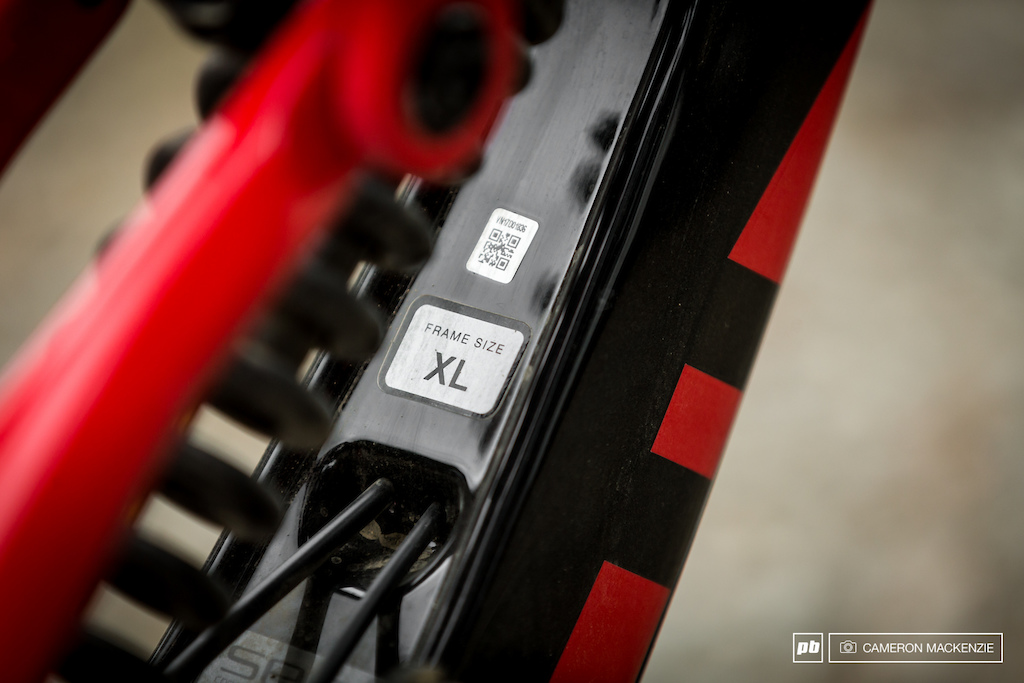 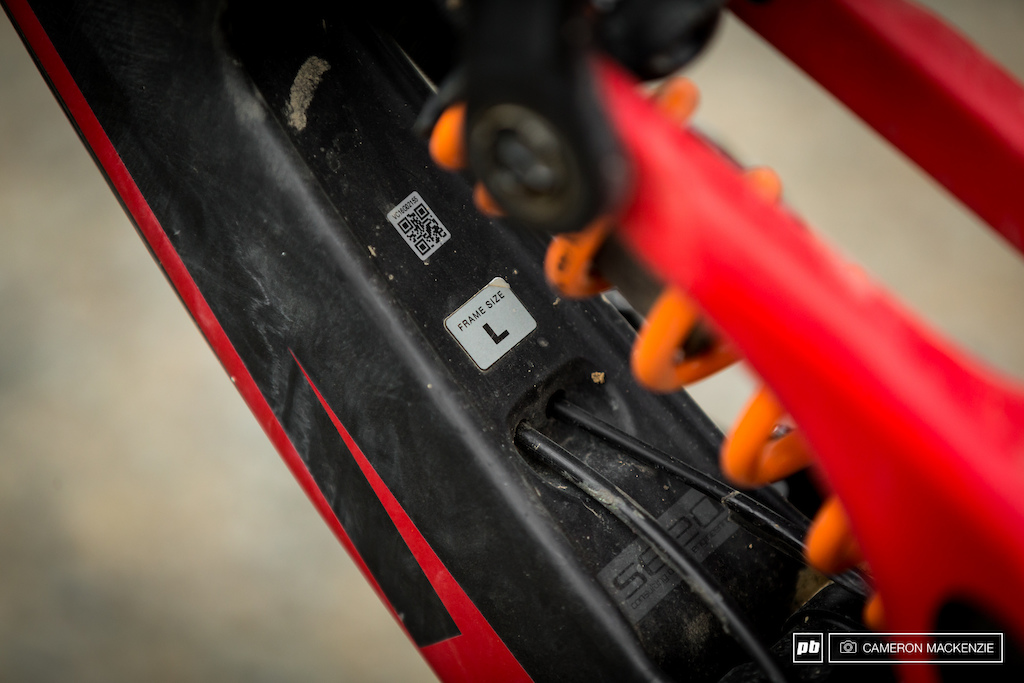 Suspension
Far from the pickiest racers in NZ, both Sam and Cole are laid back when it comes to their suspension setup. With access to a team mechanic, Morgan, they leave a lot of the setup and adjustment making to him and just offer up feedback when needed on test days. Occasionally they might add or remove air in here and there, but otherwise just get on with the job at hand; racing.

Fox 40s take care of everything up front, and a Fox X2 handles the rear. They have opted for a coil shock over an air shock as they feel it works best with the bike's suspension design. Sam was quick to add - "Anybody should know that an air shock is far too progressive on a VPP bike!" 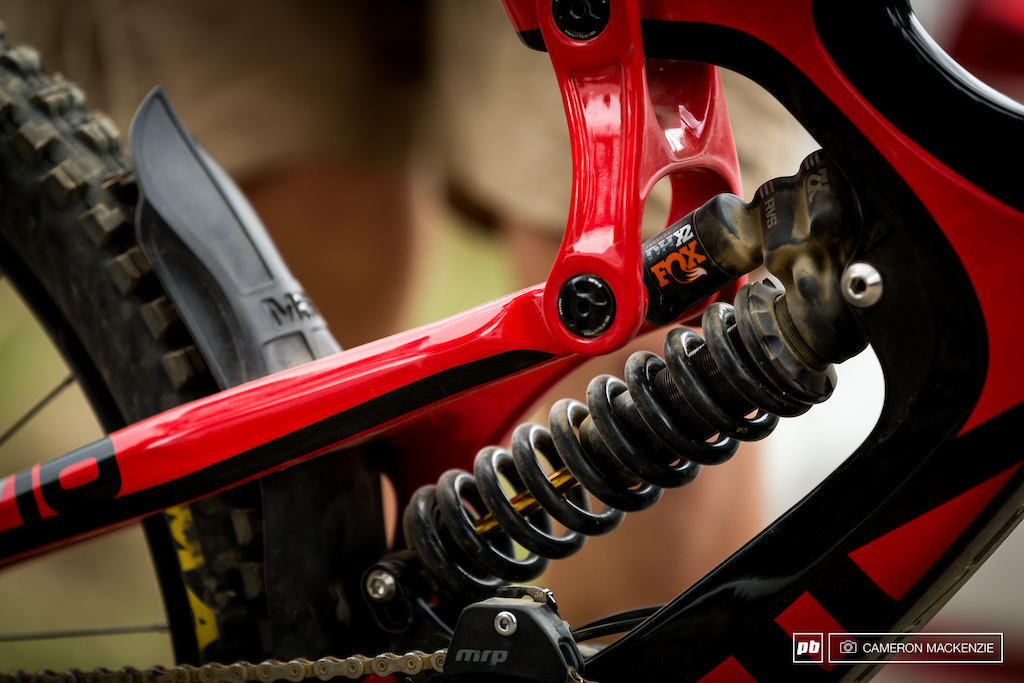 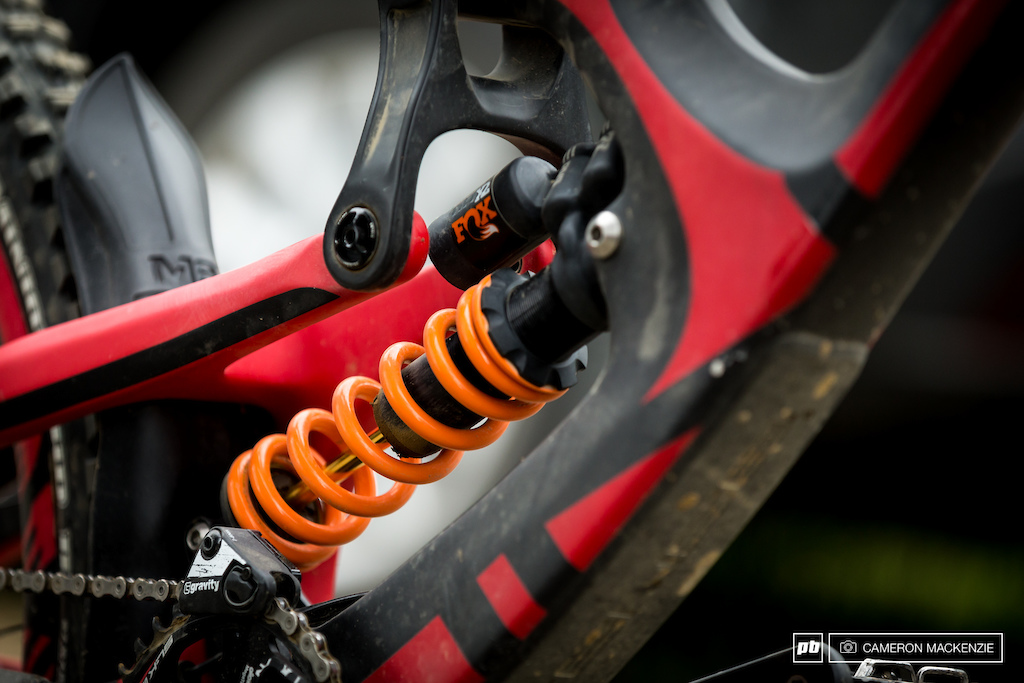 Drivetrain and Cockpit Differences
When it comes to the choice of bars and stems, Deity Components are the team's go-to. They both run a 50mm Intake DM Stem, paired with a 25mm rise BlackLabel bar. Cole cuts his bar down to 780mm, whilst Sam keeps thing stock at 800mm. They both opted for an alloy bar over a carbon one to be safe. 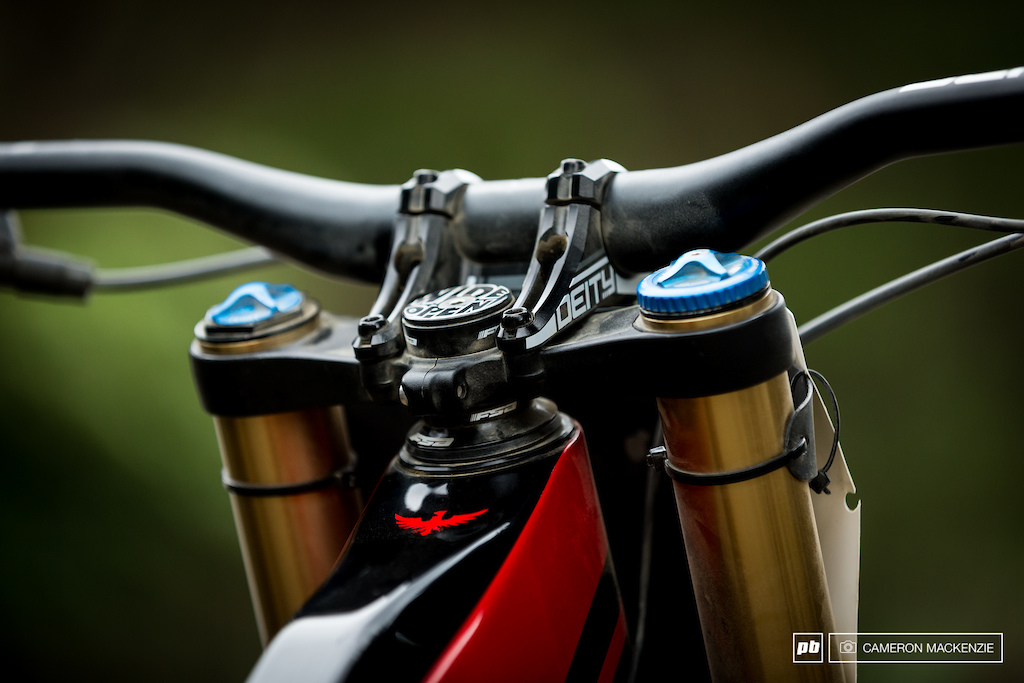 Deity Components are the touchpoint choice for the duo. 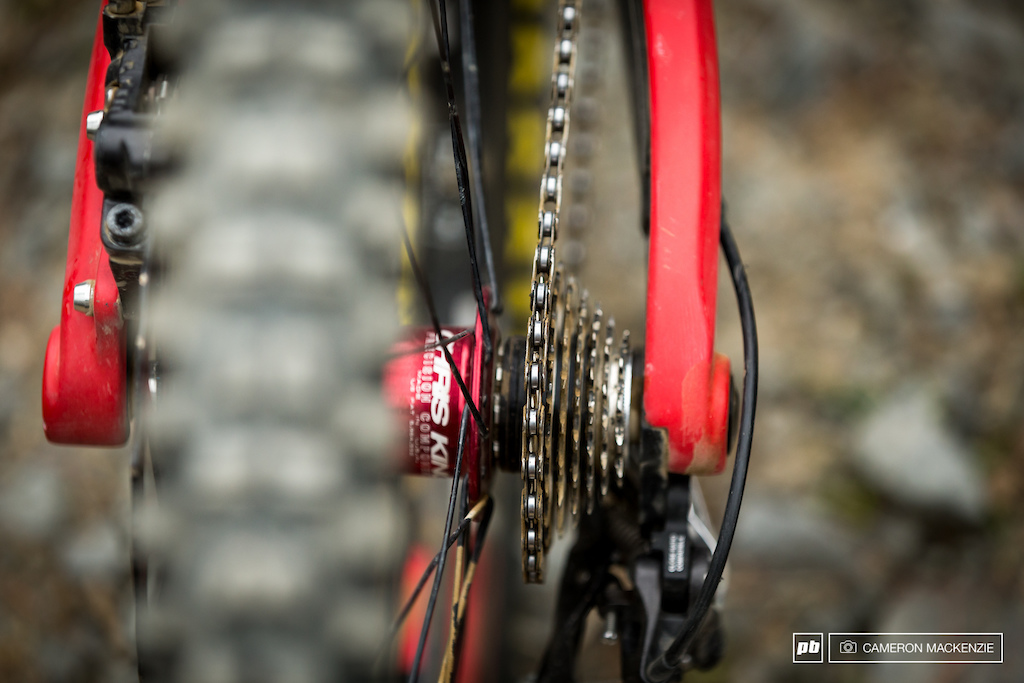 Shimano Saint is the drivetrain of choice for the duo. Including brakes.
Both racers have gone with a 36-tooth chain ring, the size they'll stick with all year, as well as a 7-speed Shimano drivetrain. The Shimano Saint drivetrain allows for this clean modification and eliminates any risk of a chain falling down into the spokes. 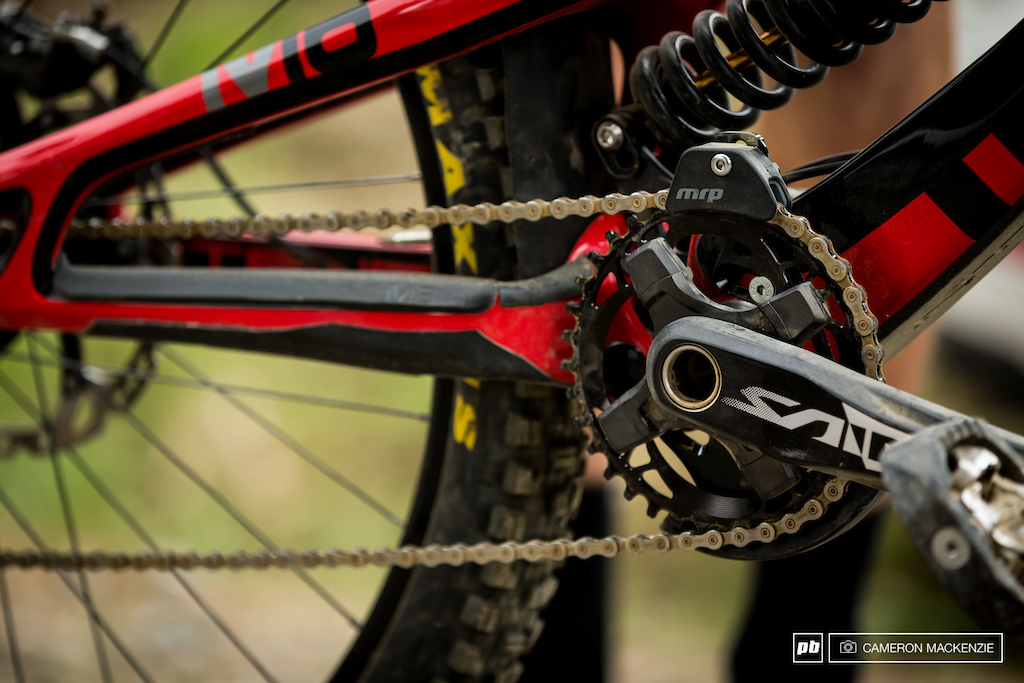 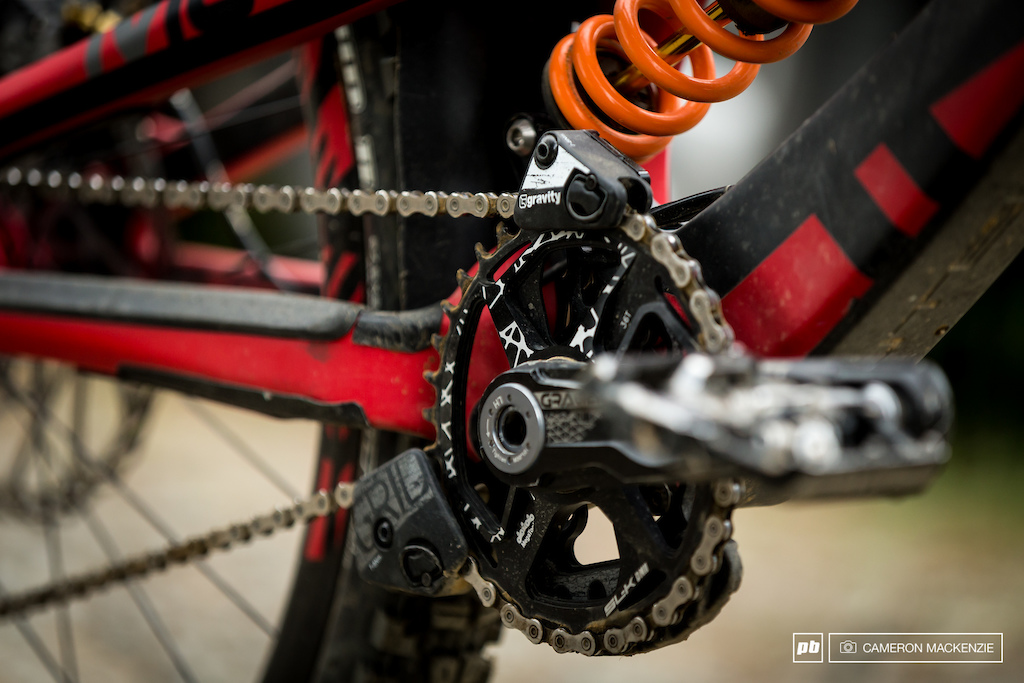 Their chainguides are worth talking about, too. Cole has never had much luck with lower rollers; with a tendancy to destroy them. He now opts for a top guide with a bashguard. The MRP AMg does the job. However, Sam needs that security and doesn't want to lose a race because of a dropped chain, therefore, runs a Gravity GRID chainguide. 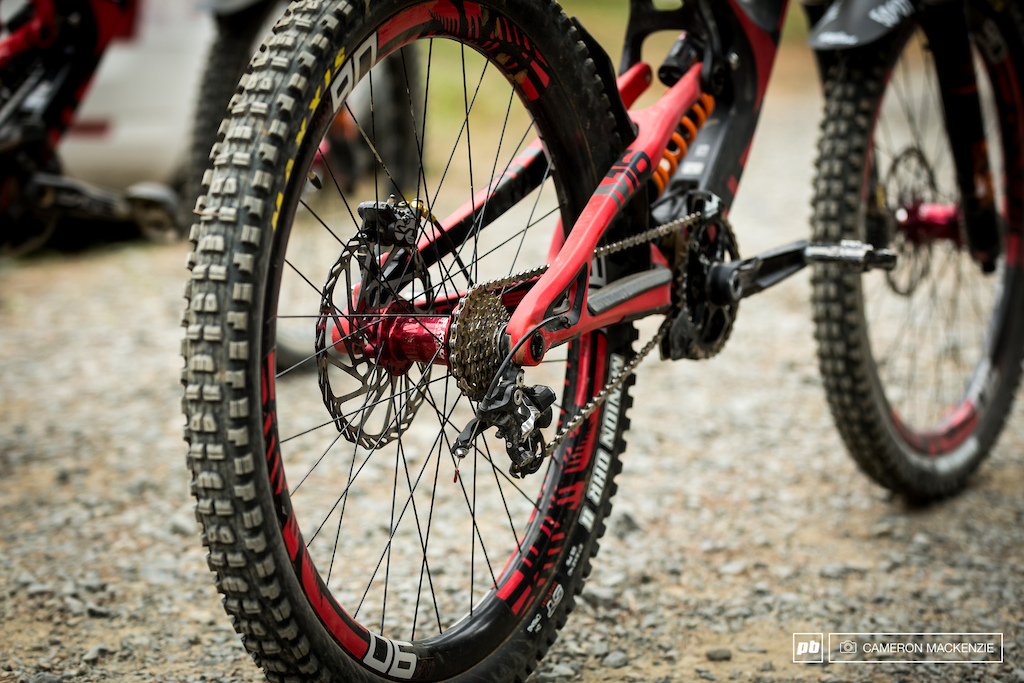 trillot (Jan 15, 2018 at 7:27)
Okay, interesting, but no mention of the difference in wheels? One guy running a carbon set of enve retailing for almost $3k, and the other guy a set of Stan's that would likely set you back 1/3 to 1/4 of the price... I'm guessing they each could have their choice - so would be interesting to hear their opinion why the chose respectively...

justanotherusername (Jan 15, 2018 at 2:22)
Interesting to see the front tyre pressure differences, they don't have a huge weight difference at 80kg v 74kg (less than 10%)

I imagine riding style plays a large part in this, how much weight is put onto the front of the bike, line choice etc but it is interesting that its only the front tyre that is different my a meaningful amount.

klinkekule (Jan 15, 2018 at 3:50)
i would think that a m9 is actually a bike that could run a modern air shock fairly successfully given the most progressive frame mount.

Also, given the widely different leverage rates on the different vpp bikes that have been produced over the years, the quoted statement is too unspecific to be accurate - though, he is of course entitled to his opinion. For instance a nomad 4 would work exceedingly well with an air shock. It is not as if it is a vpp or not bike that decides if a coil or air is the better option or not - but the leverage rate of the specific application of the design

Bruccio (Jan 15, 2018 at 6:37)
@klinkekule: as i've understood the issue, with a progressive frame you need a linear elastic element, and vice versa when you have a linear frame. of the start hypothesis is that you want a little bit of progressivity in the end but not so much that the ride will become excidingly harsh. for example, i use, as mentioned, a coil shock on my M9 (VERY progressive frame, at least according to Linkage) but an air shock on my Specy Enduro 2011 (very linear frame....i was bottoming out a lot with the fox RP23 with Vorsprung CORSET, had to go for a Monarch with 6 spacers). But yeah, i'm not 100% sure since i'm no engineer...just a physicist

WAKIdesigns (Jan 15, 2018 at 12:50)
@Bruccio - I'm waiting for all the owners of Bronsons and Nomads to read your comment and go bhwa bhwa bhwa bhwa bhwa bhwa.
@bok-Cz - I am pretty sure they meant VPP as the suspension system name used in SC and Intense bikes...

Vudu74 (Jan 15, 2018 at 13:05)
@YouHadMeAtDrugs: Oh yeah, I absolutely agree with the going with the Intense, if money isn't a thing! I'm 6'2" so I know the struggle. I have a feeling Intense will stay "conservative" on their numbers though. I'd be right there waiting for a properly sized dh bike from them though! I was just saying the Commencal is almost out and has proper tall person geometry.

Cutty-professor (Jan 16, 2018 at 2:10)
Not sure if its the graphics on the new rigs but i prefer the look of the older alloy bikes.so much more character. Probably rides awesome though.