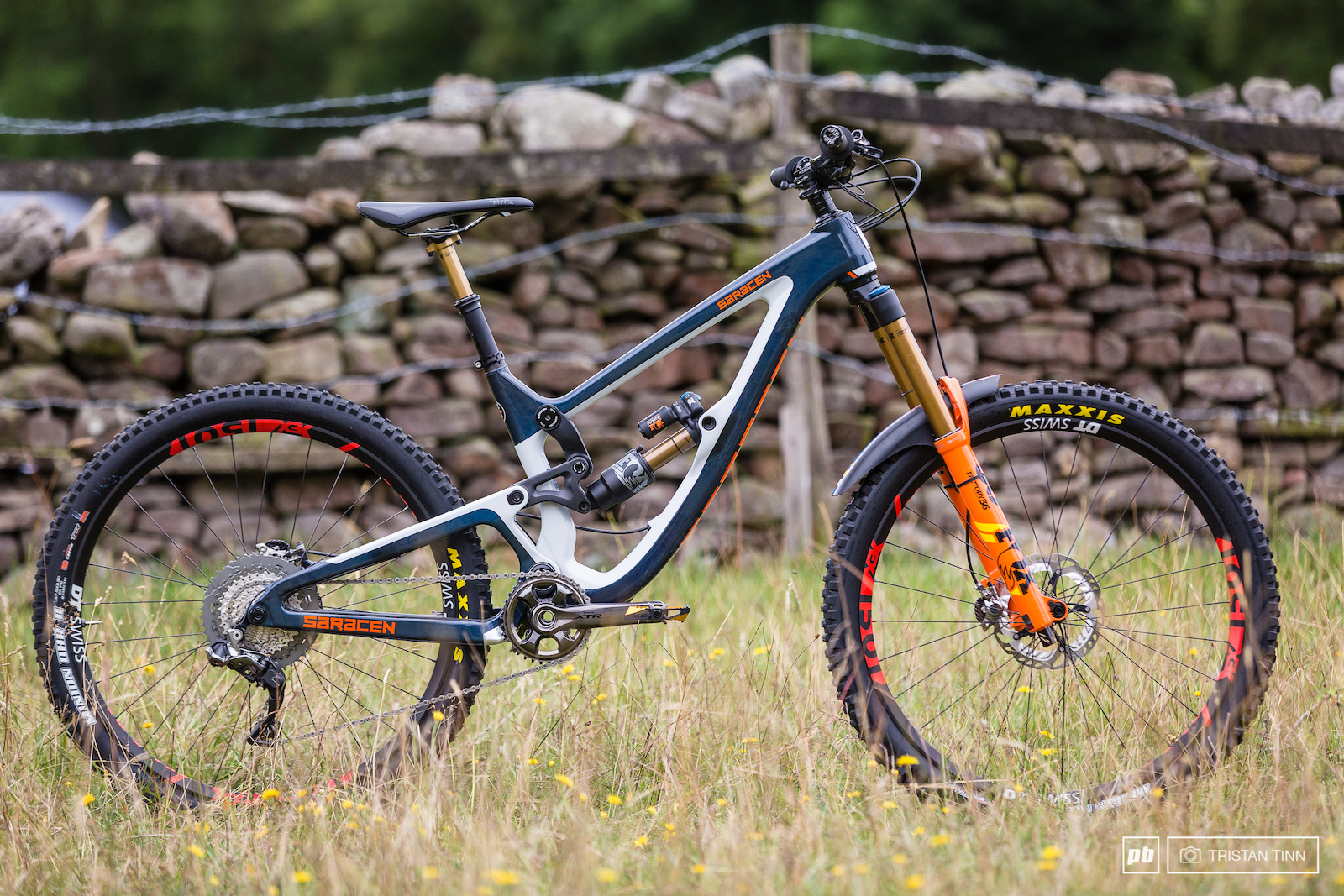 BIKE CHECK
Danny Hart's
Saracen Ariel LTXc 650B
Photography by Tristan Tinn
It's Friday the 3rd of August 2018 at the Santa Cruz Ard Rock Festival, supported by Maxxis and Camelbak 2018. World Cup downhill rider Danny Hart is a relative local to these hills, hailing from Redcar UK. While this may not be his debut appearance at an enduro, it is certainly one of Danny's first high key enduros. Any household name downhill rider making at an appearance on the enduro scene is sure to draw attention, so we decided to catch up with Danny and see what he was using to take on the challenge.

Danny has moved teams onto the UK based Madison Saracen team at the start of this season, so for the Ard Rock Danny is riding a 2018 Saracen Ariel LTXc 650B, size medium. The frame provides 165mm travel on the rear delivered by a Fox Float X2, up front Danny is running 180mm travel Fox Factory 36 fork. When questioned on suspension specifics Danny stated that the bike was set up inline with his downhill bike, something that mechanic Dave Garland and Danny have been working hard on to perfect with fixed telemetry units previously seen online. 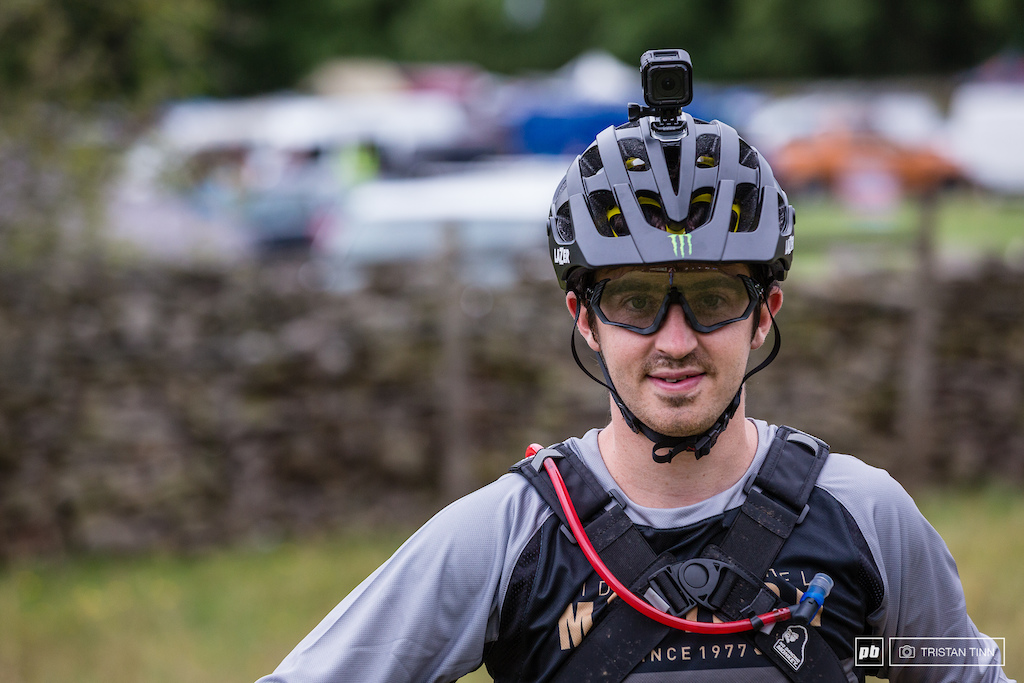 Danny Hart // Madison Saracen
Age: 26
Hometown: Redcar
Height: 5'9" / 175 cm
Weight: 145 lb / 66 kg
Instagram: @dannyhart1
Danny's Ariel has gearing delivered by Shimano XTR Di2 11 speed, with a 46t sprocket on the rear cassette. The rest of the drivetrain was also XTR, along with a black and gold set of Crankbrothers Mallet DH 11 pedals. Danny runs a DT Swiss EX1501 650B wheel set with Maxxis DHR II 27.5x 2.40 in 3C compound, the bike had a DH casing up front with a Double Down on the rear which was unusual and unexplained, perhaps an anomaly.

Braking is taken care of by a pair of XTR brakes, with 180mm rotors front and rear. The bike was finished off with Pro finishing kit, a 100mm drop Kashima Fox Transfer post and soft ODI lock on grips. A Mudhugger front mudguard is also fitted to the bike. 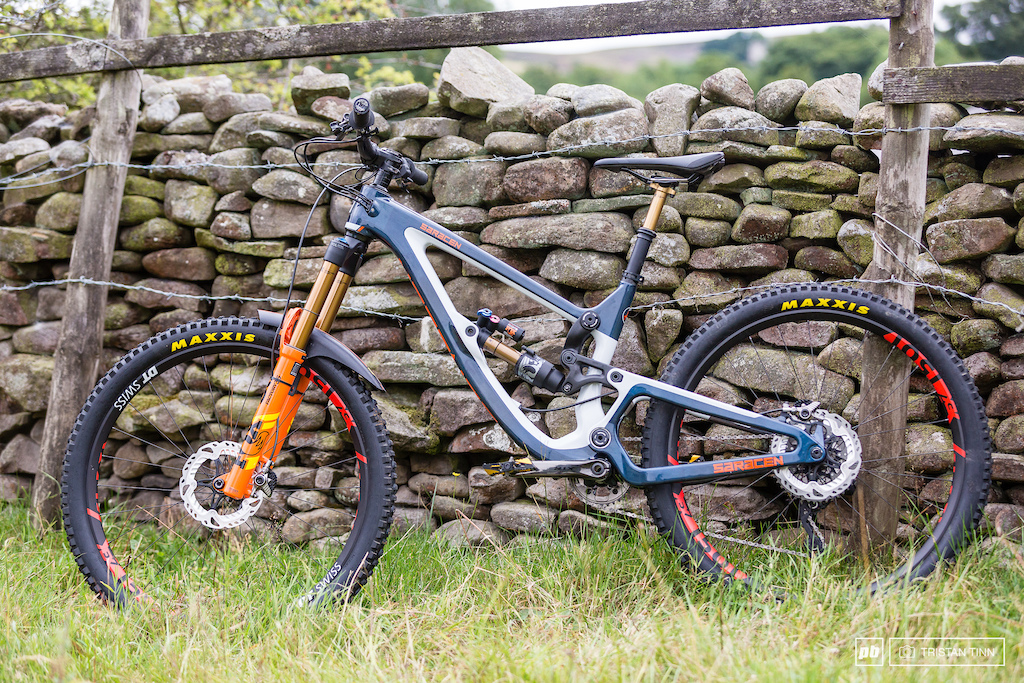 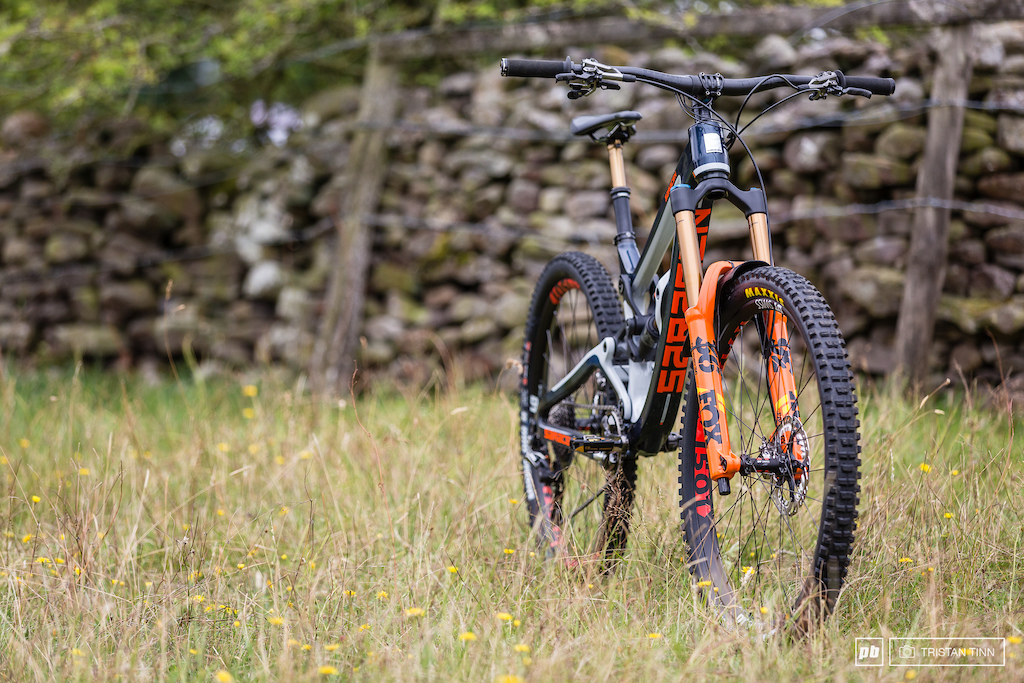 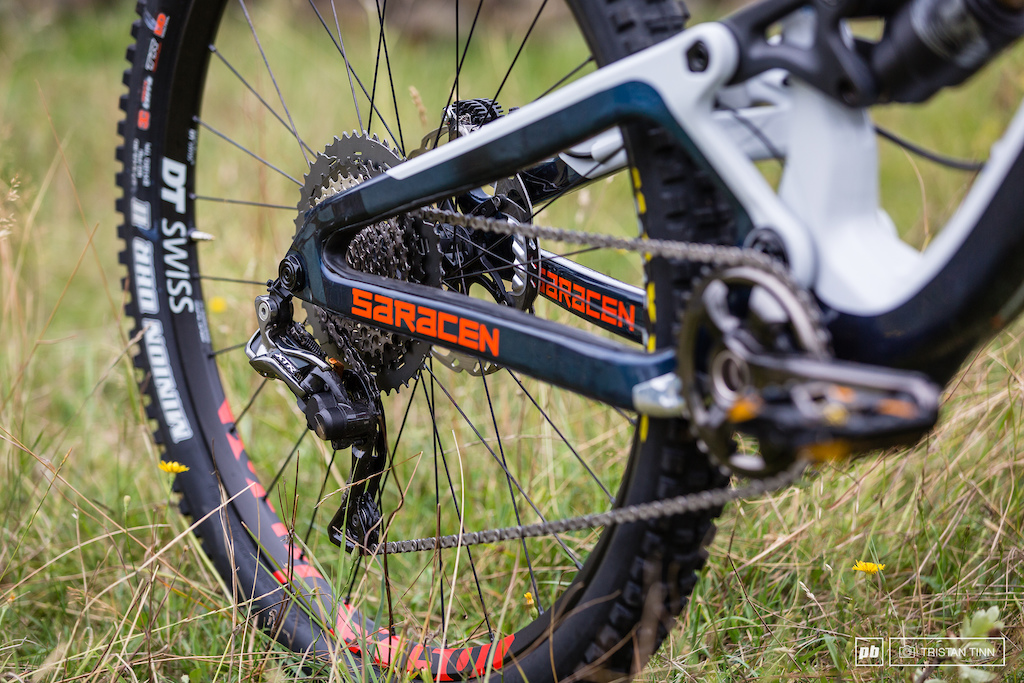 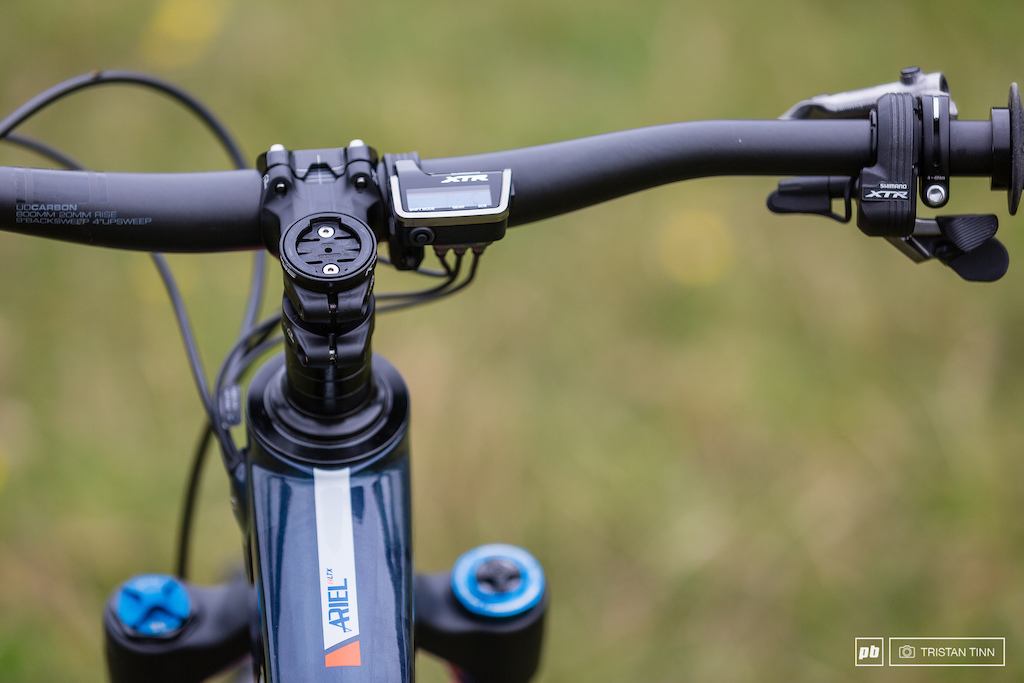 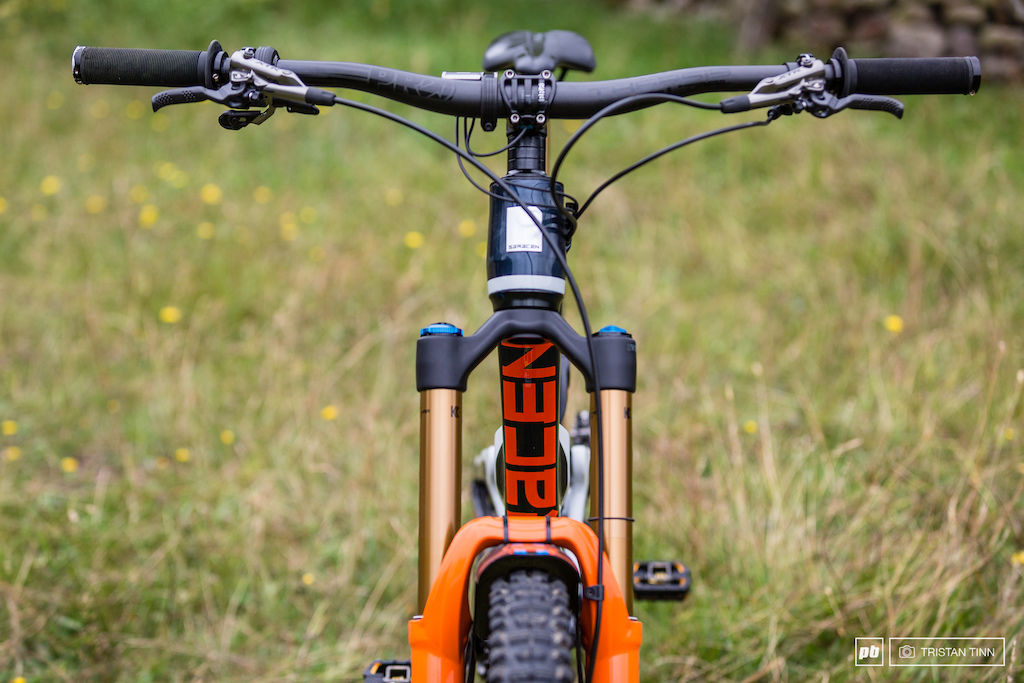 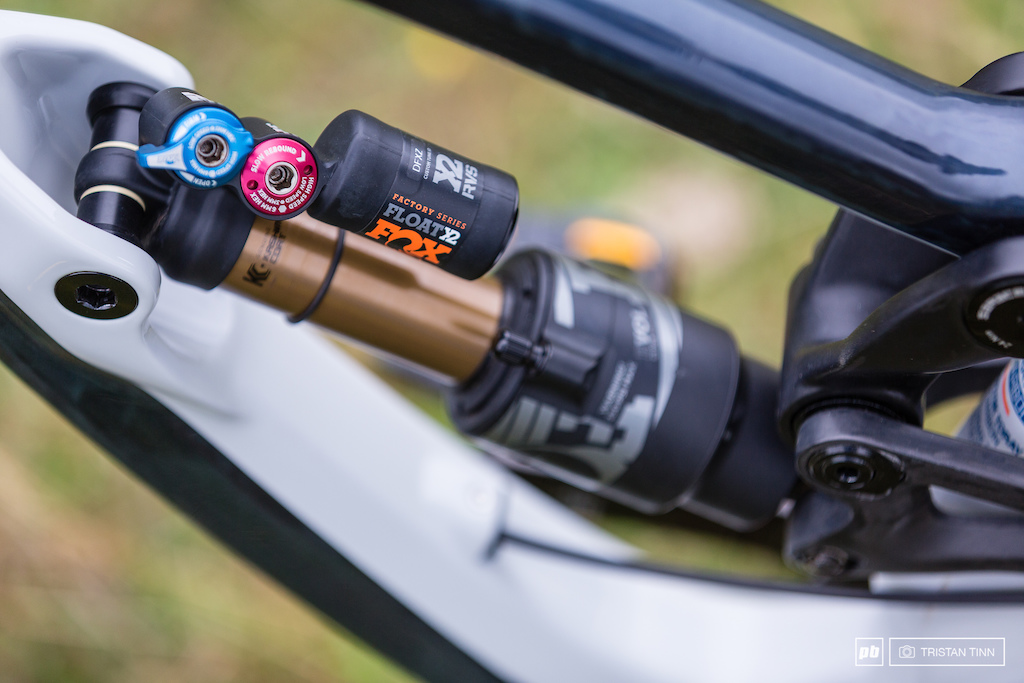 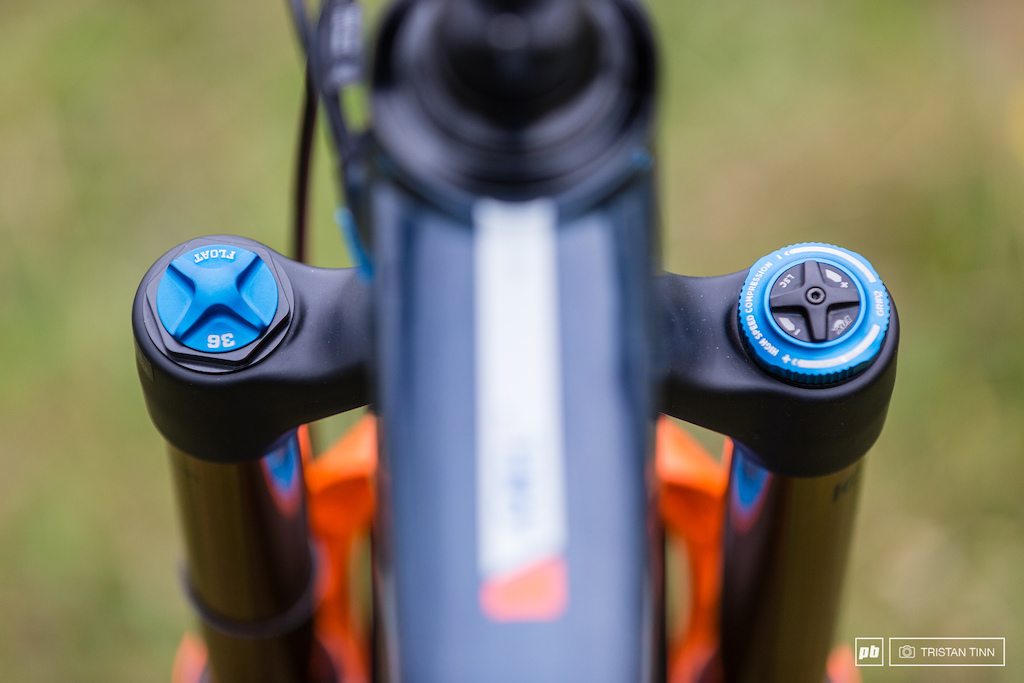 Fox providing the suspension, with an Float X2 on the rear and a Factory 36 180mm up front 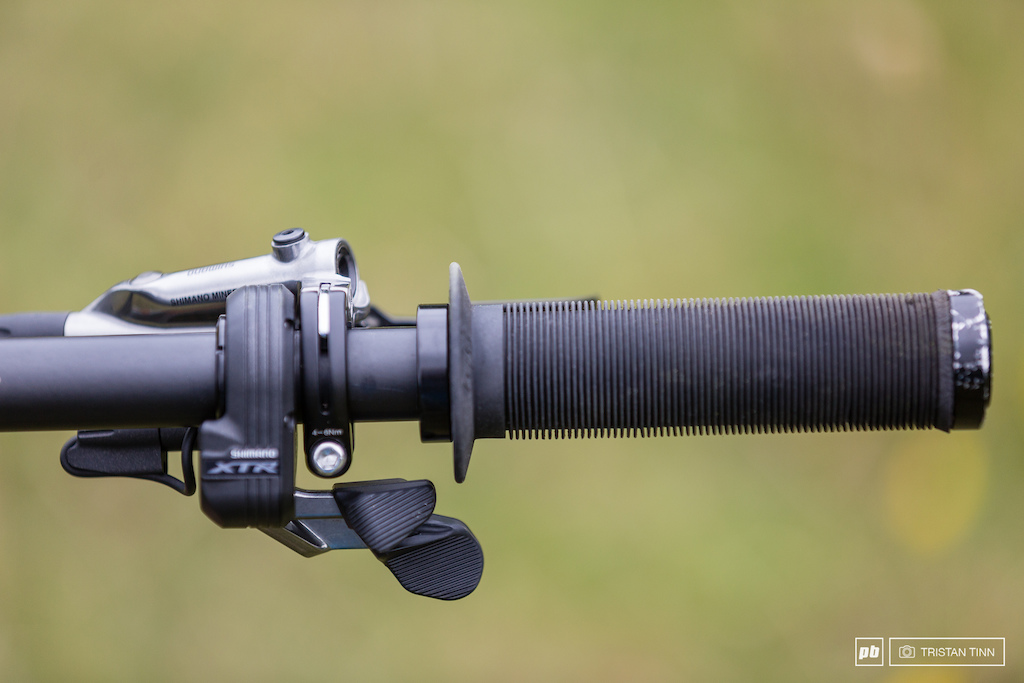 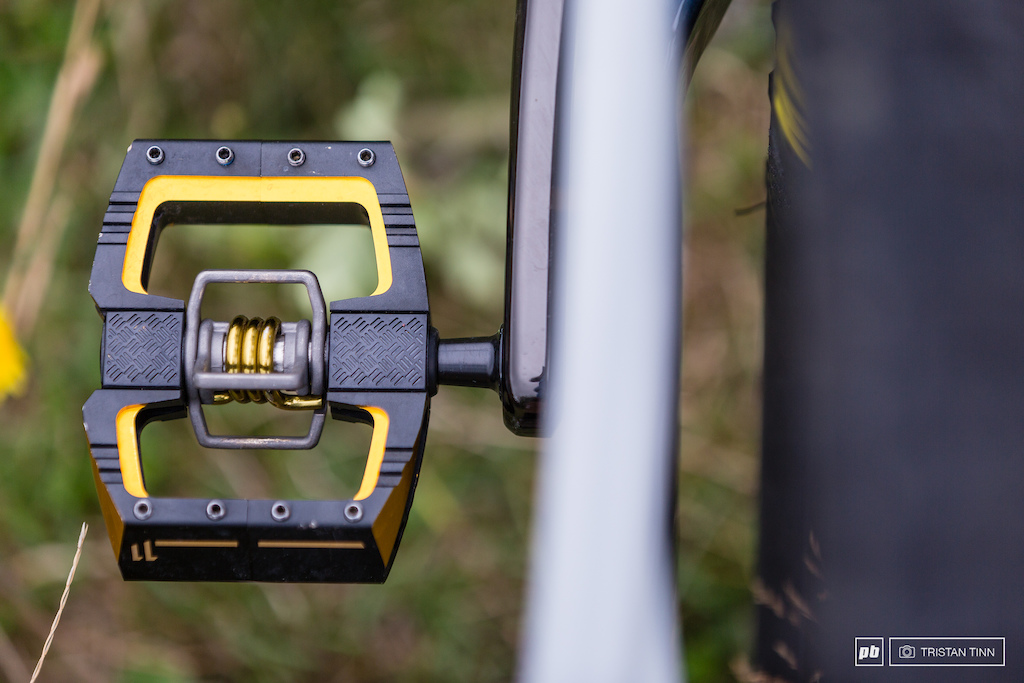 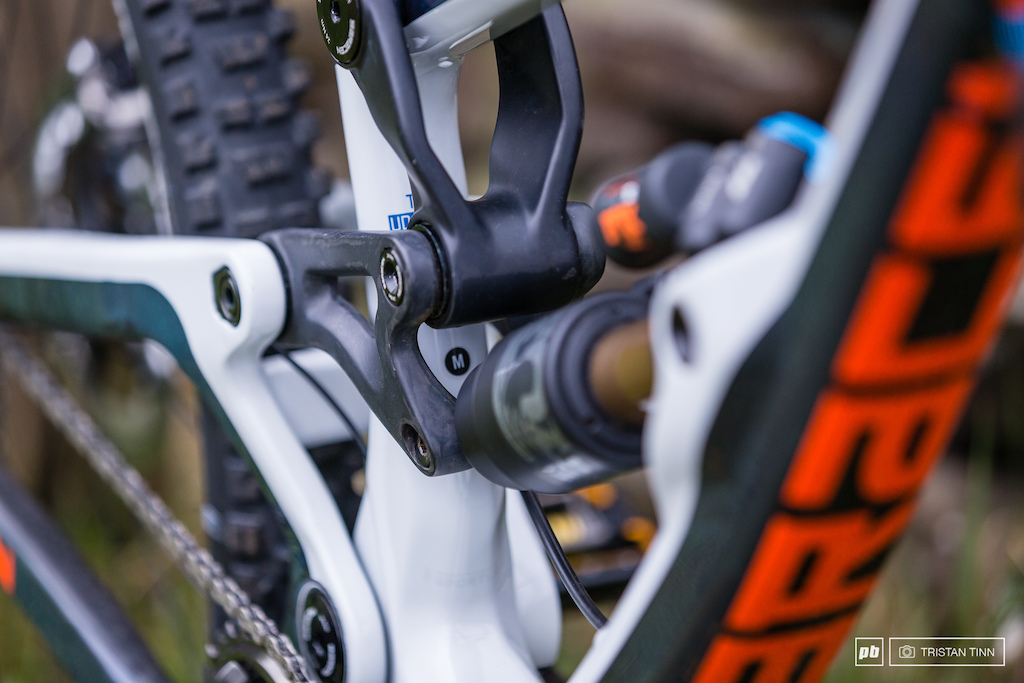 Danny rides a size Medium and stands at 5'9 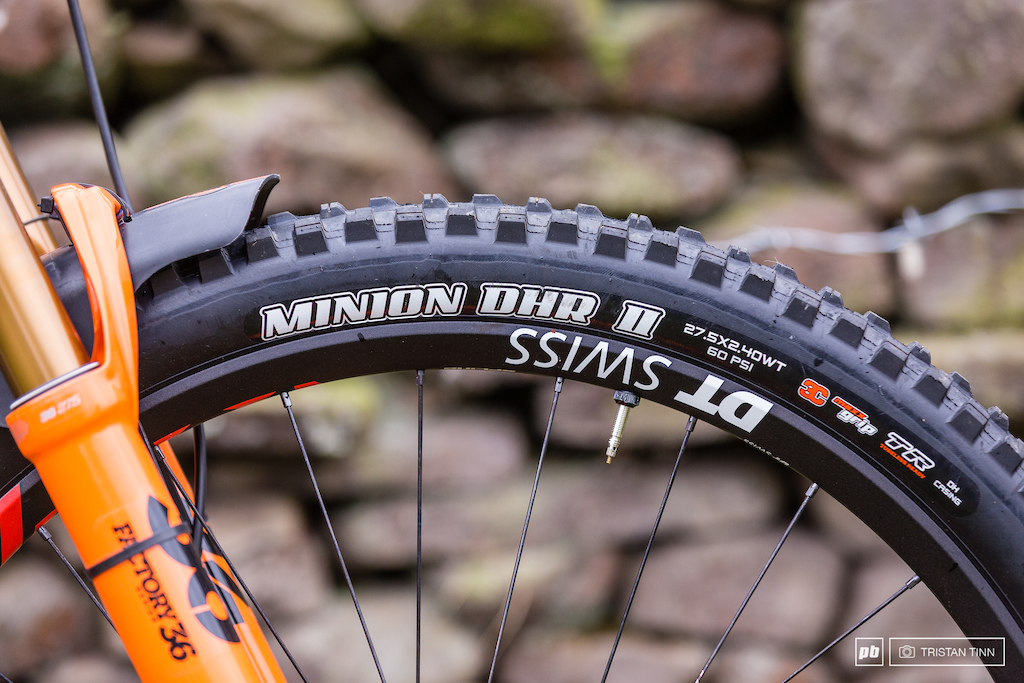 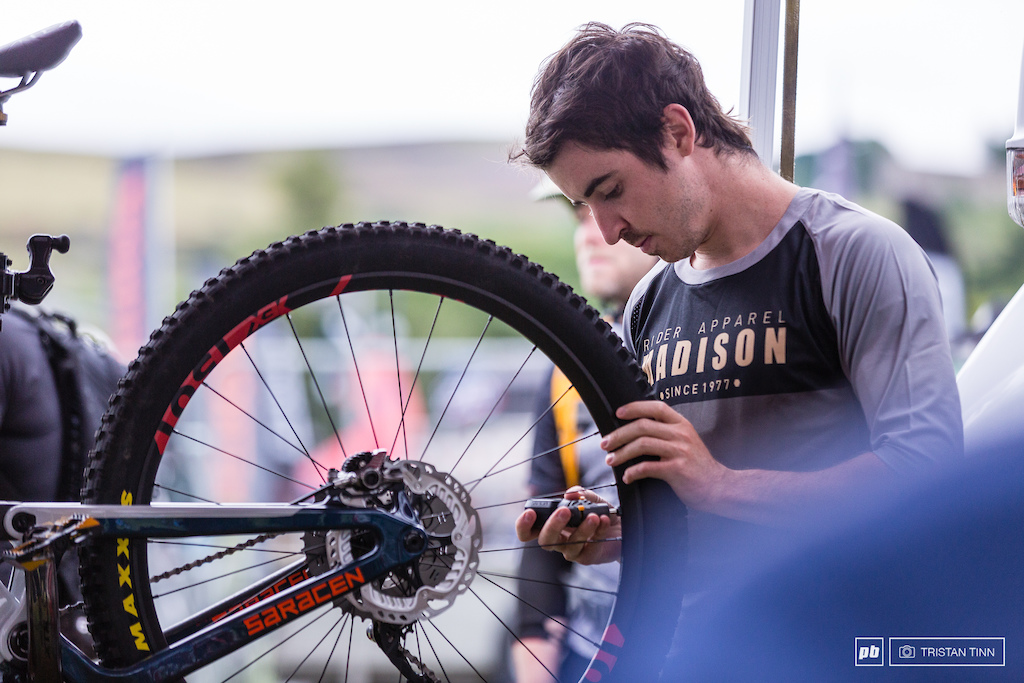 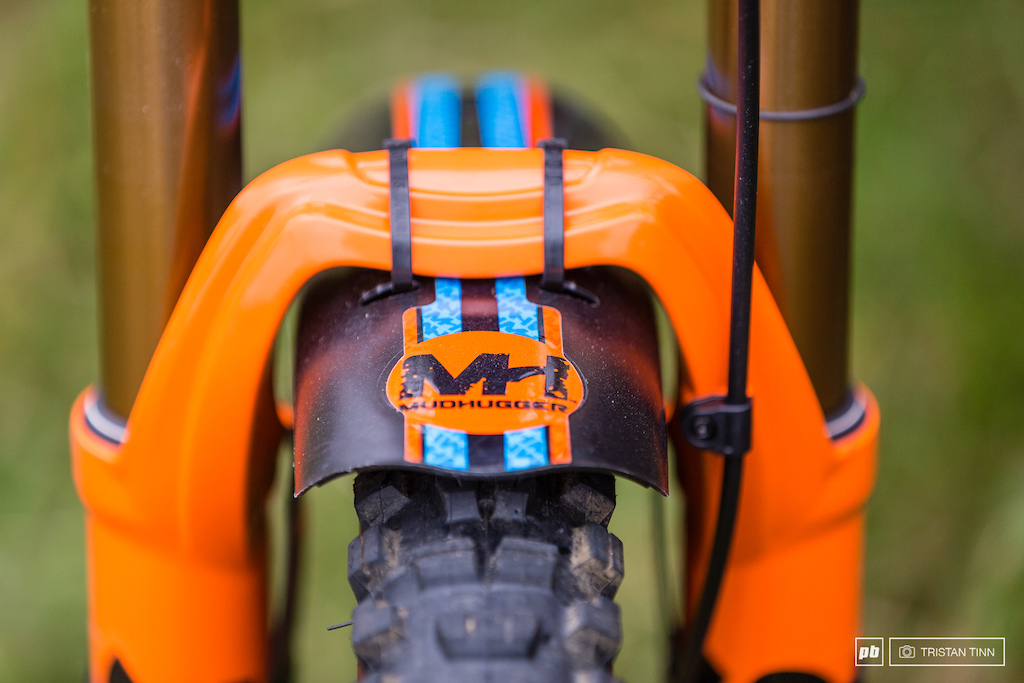 Hopefully the Mudhugger won't come into play this weekend 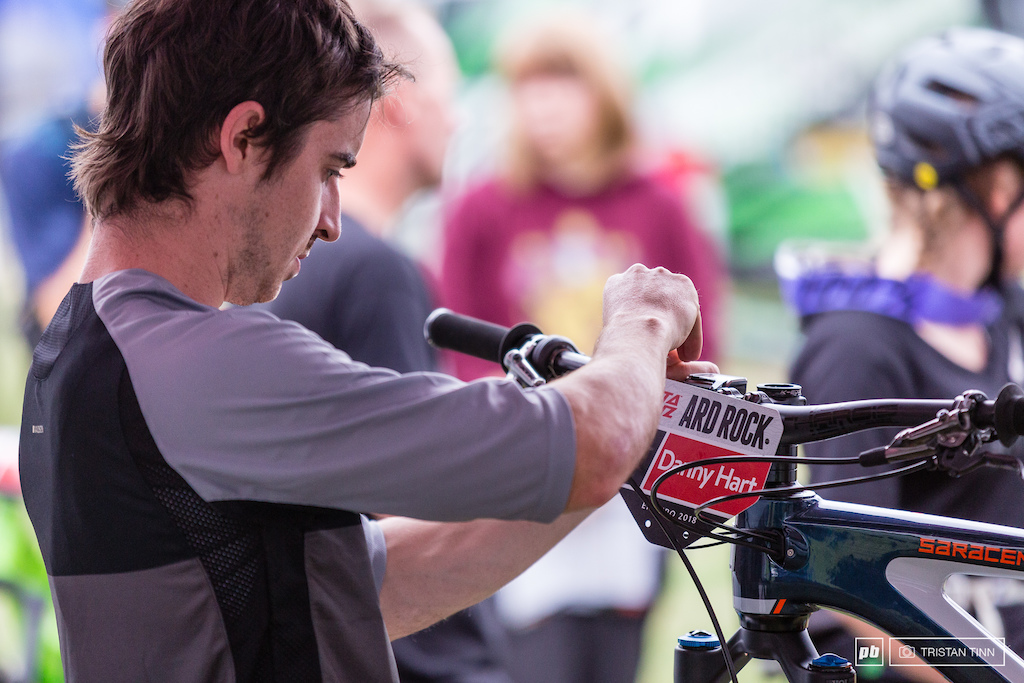 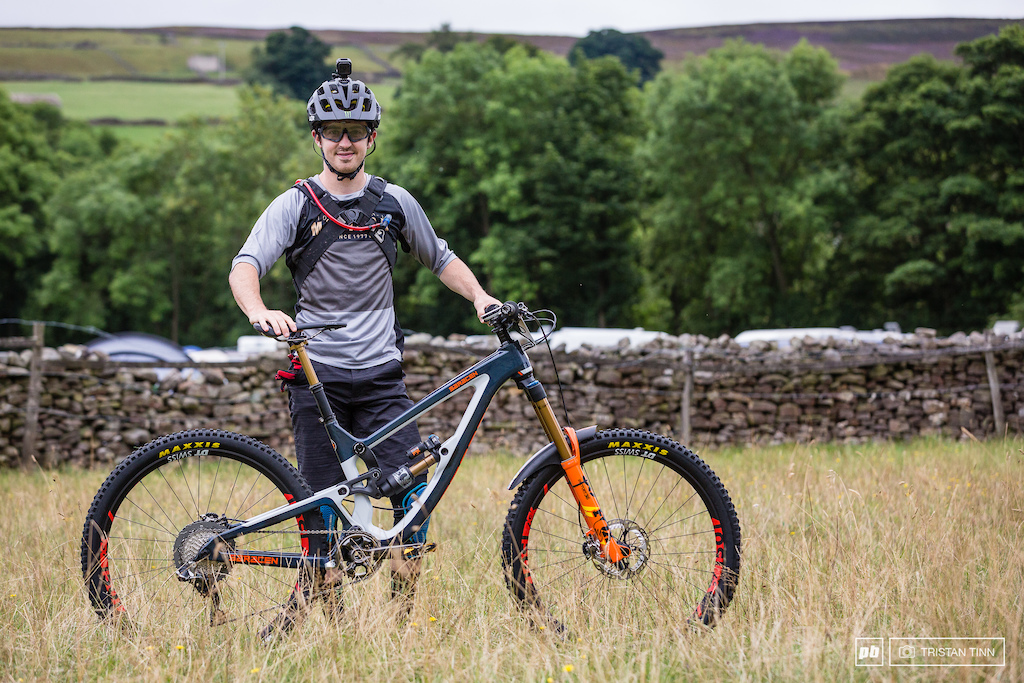 yupstate (Aug 3, 2018 at 19:21)
OMG those pictures of him smiling all decked out in helmet and camera, you just have to smile right back. Have you ever pulled up to a stop light and gotten SMOKED by a Honda Civic with rusty wheels or gotten your @$$ kicked by the kid that won the science fair? That must be what its like.

PinkyScar (Aug 3, 2018 at 22:57)
@schralpknobslikecornonthecob: Are you the newest omnipresent a*shole on pb?

woodyc (Aug 11, 2018 at 2:08)
@thenotoriousmic: you ridden Ard Rock? Maxxis didn’t have a van at the end of stage 3 because it was smooth. You’d think they scattered razor blades before the event!

mtnrush666 (Aug 3, 2018 at 17:11)
I am pretty sure Danny can run whatever length dropper post he wants. I imagine he doesn't want it too low so he can lean on it for certain cornering situations. I remember either Fabien Barel and Nicolas Vouilloz talking about not having the seat too low when they were racing EWS.

DrSam (Aug 4, 2018 at 2:14)
@mollow: In theory, it sounds good but in practise I hardly ever stop anywhere in the middle of the travel. It's either up or down for me. So 100mm to 125mm is enough clearance to get my butt out and low enough at the bottom position that i can control the bike with my thighs/knees.
I can't say for sure if Danny Hart rides like that but he might, seeing that he should be able to get any dropper length he wants.

Try riding a pump track with a high bar height.

hmstuna (Aug 4, 2018 at 9:37)
@tulipanek: not necessarily some people have longer inseam to torso ratio or vice versa.

OldOtter (Aug 5, 2018 at 5:35)
So this is a standard single pivot suspension design. I have ridden them and quite like it, needs some getting used to though, and it’s not not what Iam riding now. So of all the things we could discuss, I reckon that is the thing I would like to hear about most, not just theoretically, but from those of you who have ridden different kinds and thought about it a bit. For myself, I have found geometry rules, with suspension design coming after that. Never had the luxury of being able to do the proper experiments.

NCByron (Aug 3, 2018 at 19:21)
I like the hydration pack harness. Looks like it would keep the thing from shifting around.

pinhead907 (Aug 3, 2018 at 16:35)
That is an enormous headtube - more than likely designed to fit offset cups in there. Didn't catch anything about that in the article - but I ready pretty fast, maybe I missed it.

Jaybirdy (Aug 4, 2018 at 10:40)
@pinhead907: Looks very Similar to a Pivot Head tube.. also the rear swingarm one piece design is super close to that of a Firebird or Phoenix!

flipoffthemonkeys (Aug 4, 2018 at 6:17)
is danny hart related to john oliver? real question, thy look like brothers

sospeedy (Aug 3, 2018 at 16:31)
I’ll be watching for your bike check on Pinkbike
Below threshold threads are hidden

Engineering Fail. What do those guys get paid for?

artistformlyknowasdan (Aug 6, 2018 at 17:15)
A lot of us could careless about having water bottle mounts

ridayobike (Aug 7, 2018 at 19:58)
@Grmasterd: You make up the monority bud... Thank you for you 1% Report, now on to real MTB problems like Hydration. It must rain a lot in America, in Canada it's hot as all hell, neeed that extra bottle.