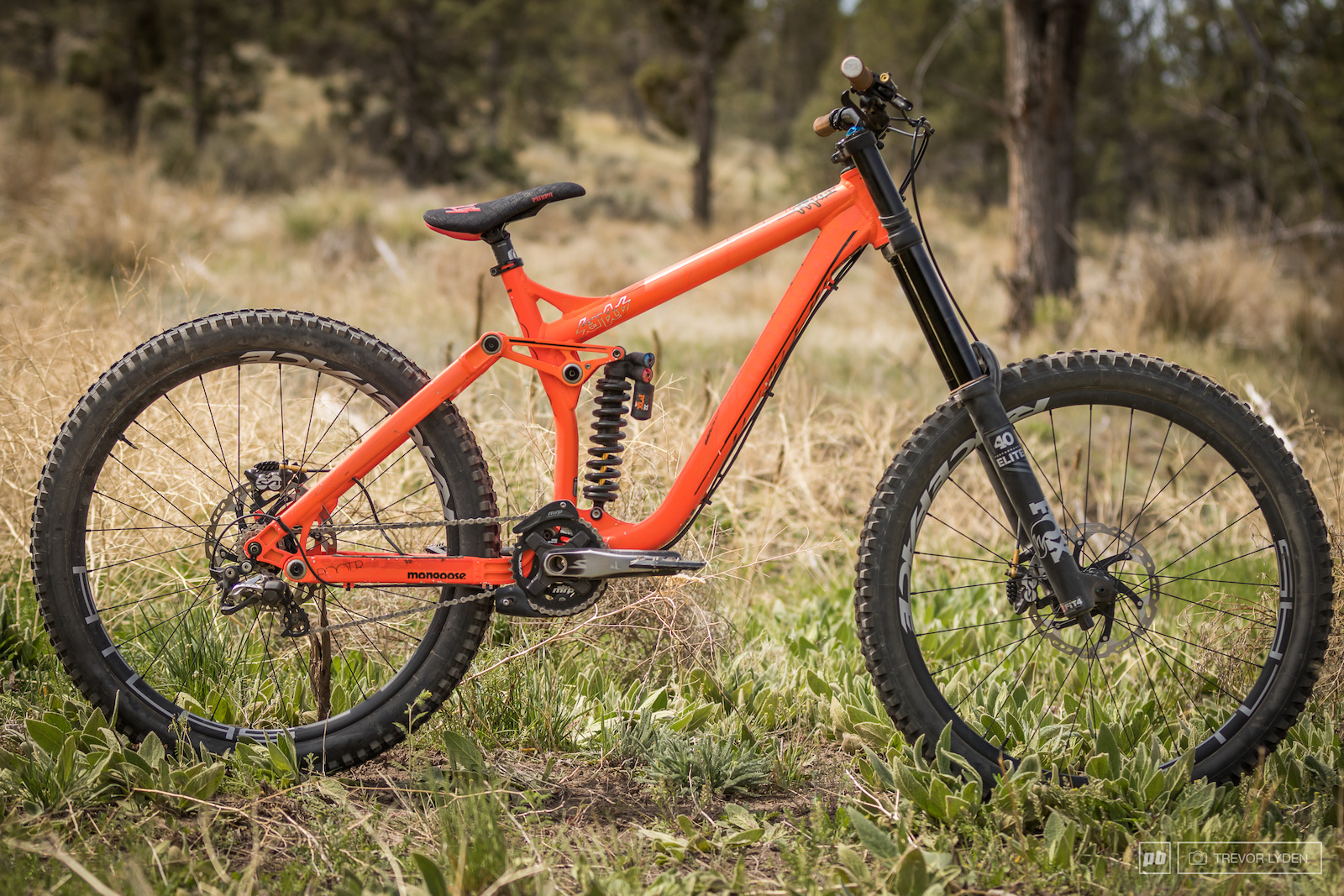 DJ Brandt is an up-and-coming freerider, but from his performances as of late I think it's safe to say that he's officially arrived. DJ was first recognized in the mountain bike scene for his dirt jumping, but the past few years he has branched out and applied his hardtail skills to the big bike. Most recently, he's been living in Utah, training with Ethan Nell and the rest of the Utah freeride crowd. His experience with big mountain riding led him to Rampage, as a digger, and if things keep going the way they are now, it's likely we'll see DJ competing this year. He is currently riding for Mongoose bikes, on their newly released Boot'r, so we asked him how he was getting on with his new ride.

The Boot'r was Mongoose's first downhill rig and the latest version is built like a tank. Its aluminum frame is built around 27.5-inch wheels, with a Horst Link four-bar rear suspension that makes 200mm of 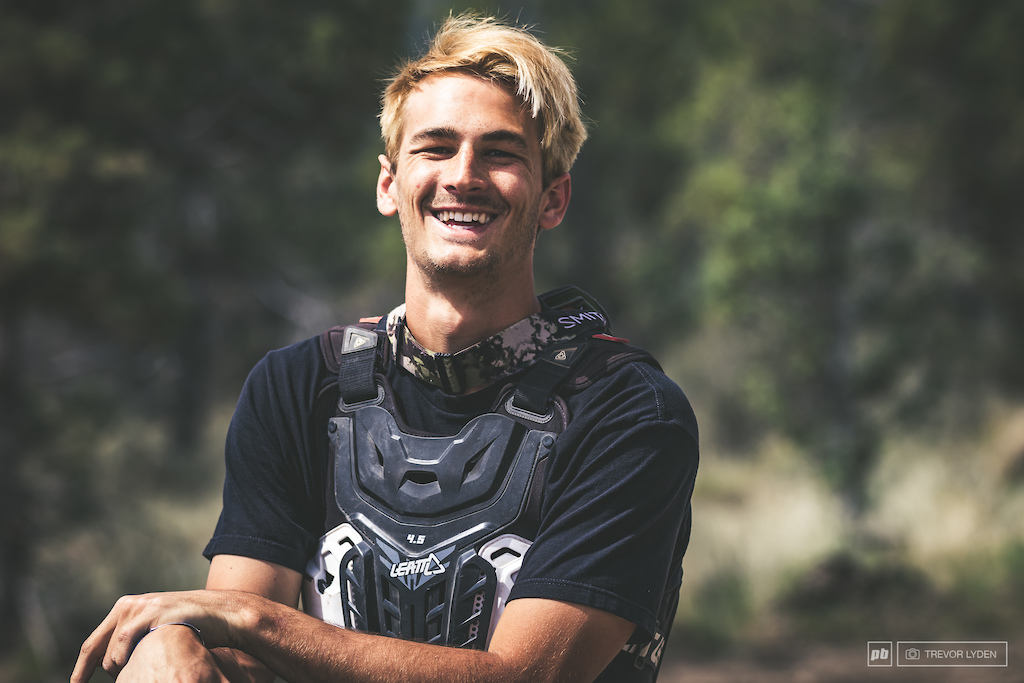 DJ Brandt
Age: 24
Hometown: Grand Junction, Colorado
Height: 6'2"
Weight: 180lbs
Instagram: @djshreda
travel. He says it stays firmly planted when he wants, and flies when the time is right. DJ has added a few higher end components to the bike's budget-friendly build, but he claims his ride is still pretty stock.

Fox provides the suspension both front and back, with a 40 Elite fork and a DHX2 shock - and DJ sets it up nice and stiff for added confidence on hard landings. Shimano brings the stopping power with large, four-piston Saint brakes, and he rides a Raceface Atlas wheelset. DJ is running something a little different with his rear hub. Lets just say that more switch tricks are in his future. 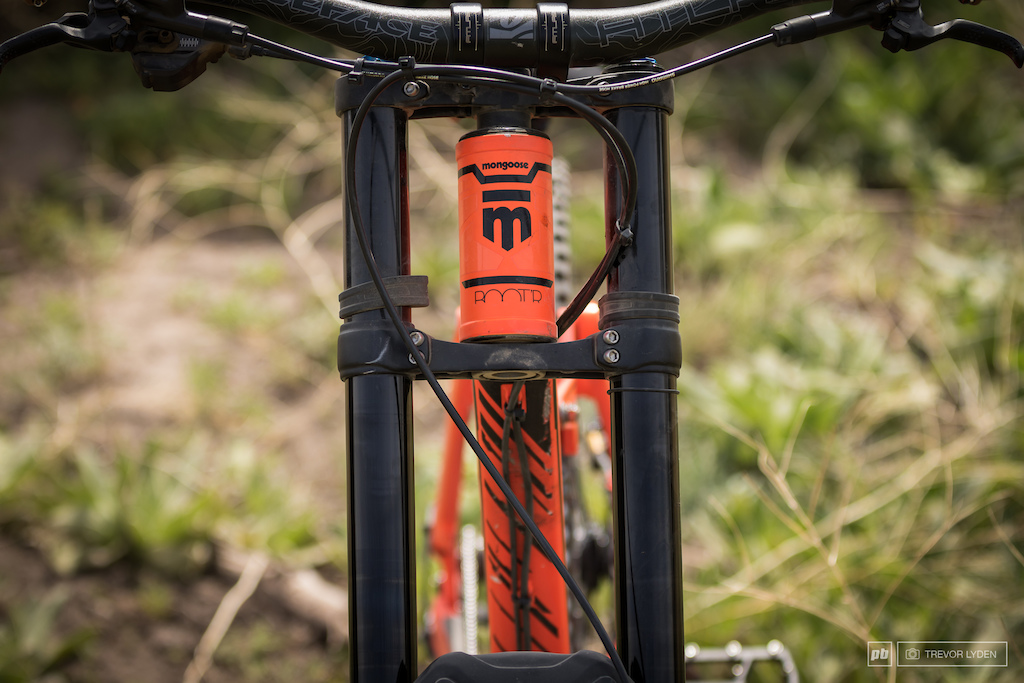 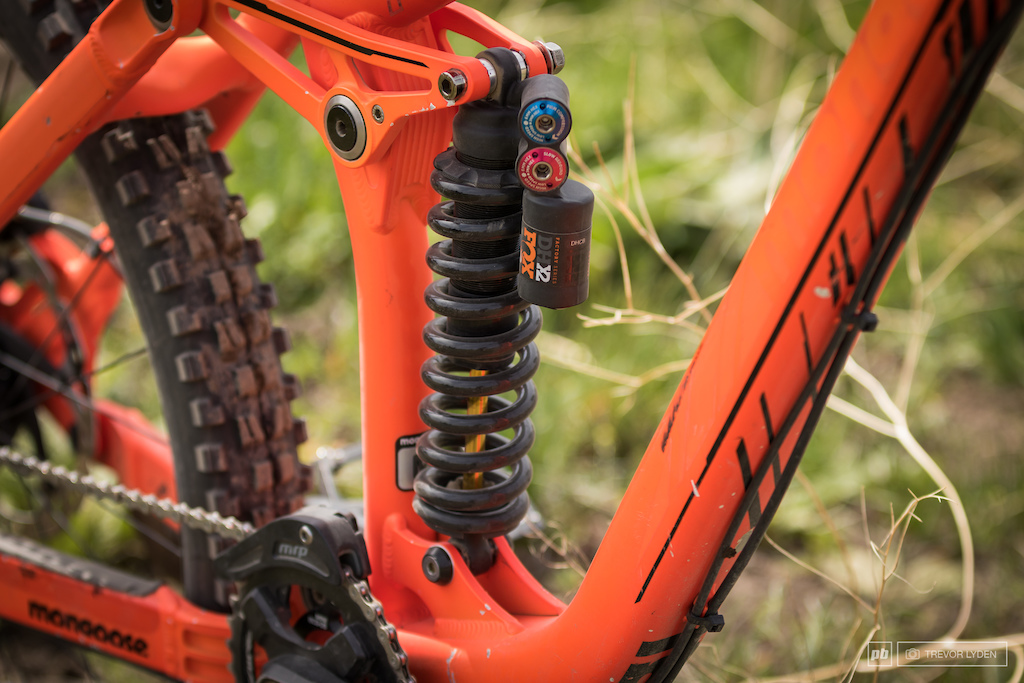 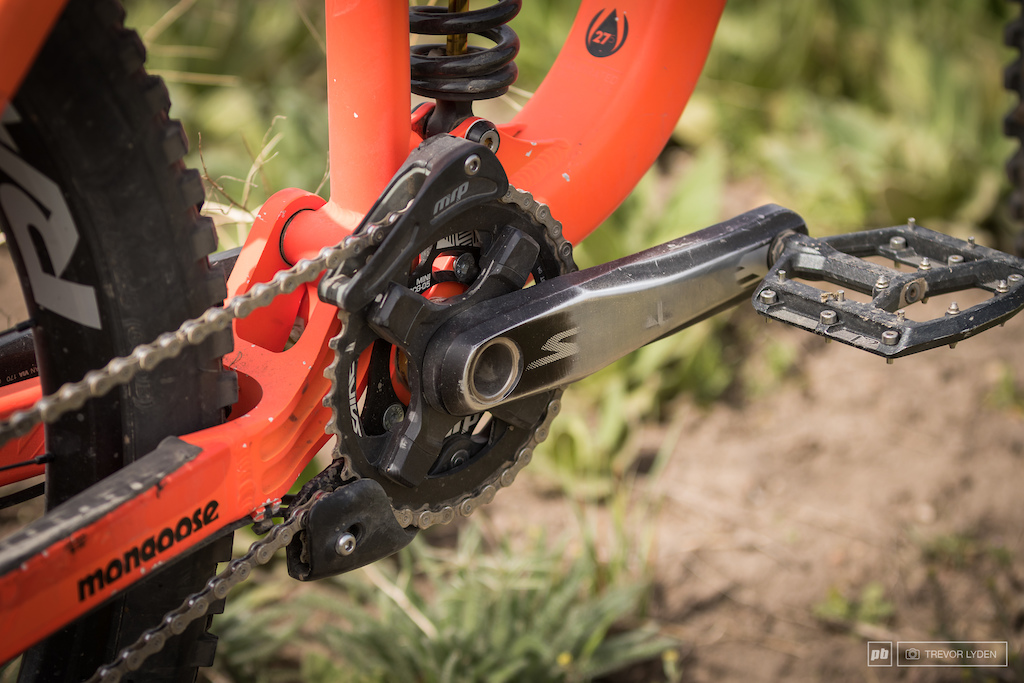 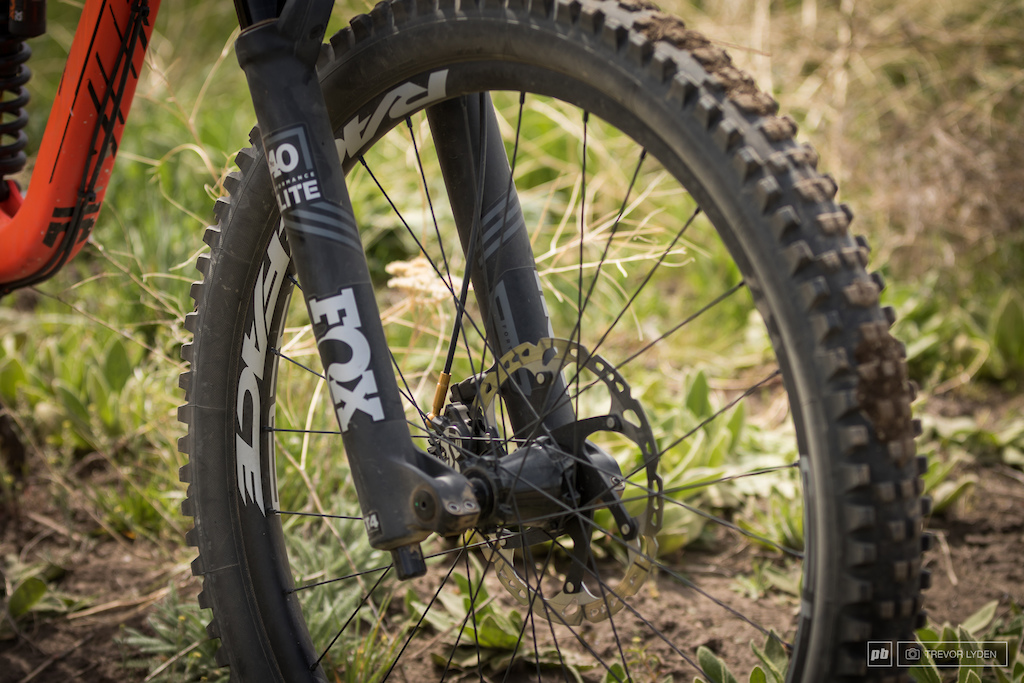 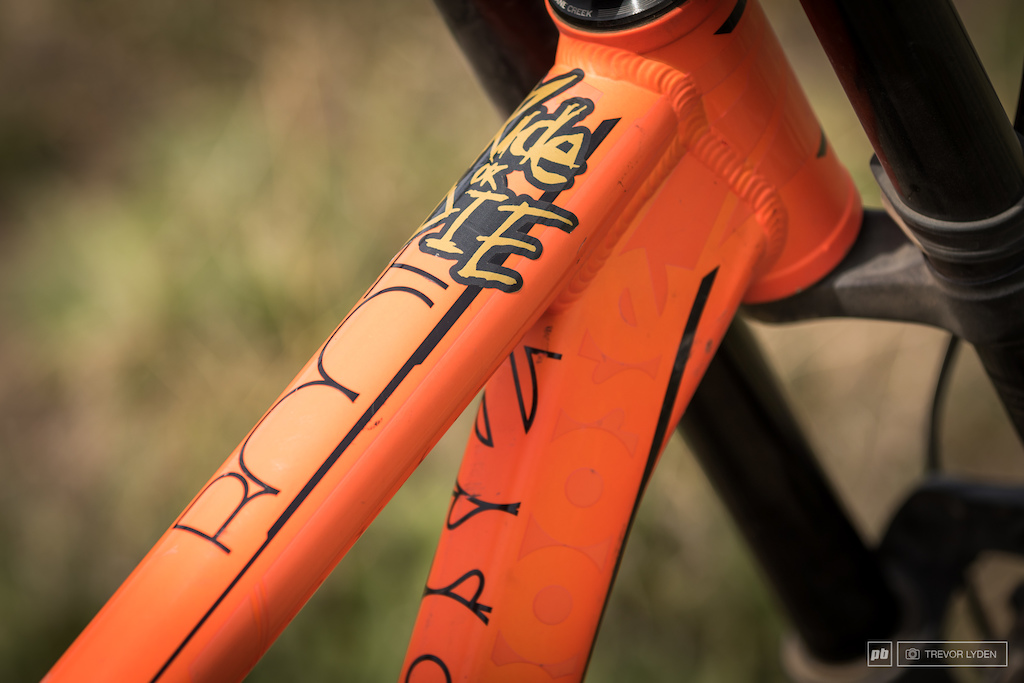 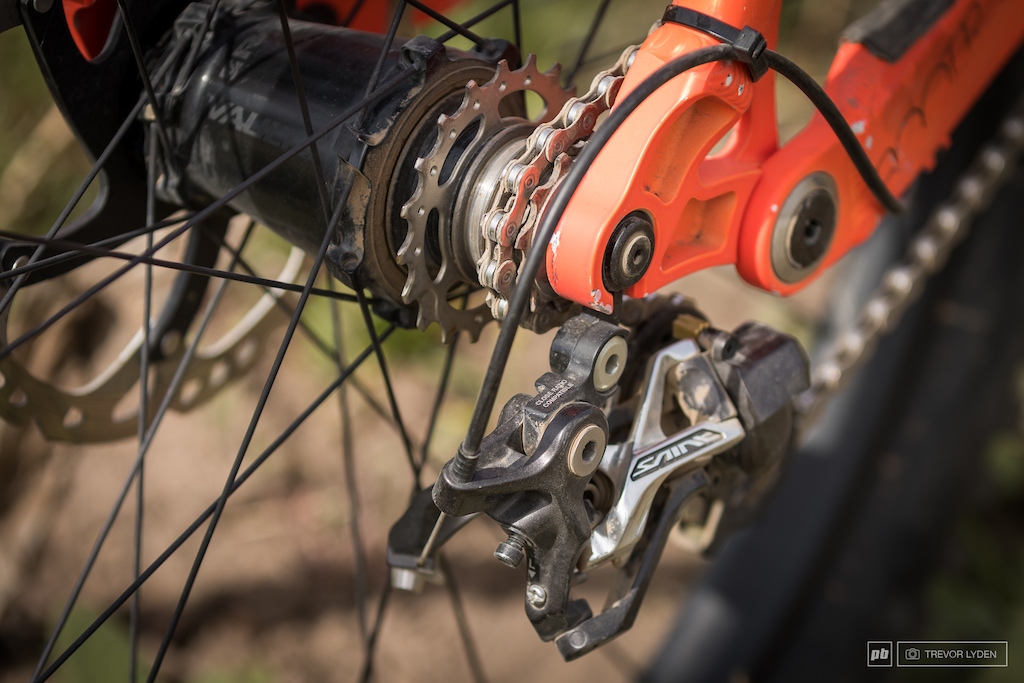 The middle shift is "neutral."

GunRack (May 7, 2018 at 16:12)
Its not a freecoaster, its a raceface vault. Hes got a spacer on there so he can shift onto it and have no engagement for fakies.

Kywhite96 (May 7, 2018 at 16:06)
Question: What keeps DJ Brandt with Mongoose? I saw on Instagram a few months ago that he renewed his contract with them, surely he has gotten offers from more well know brands, so why stay with them? Money, product development, loyalty? It would be interesting to know.

Either way, he's an awesome dude riding a pretty sweet bike and I look forward to seeing how he progresses!

djbrandt (May 7, 2018 at 22:04)
I stay with Mongoose because the people I work with there. My TM and Marketing manager are awesome dudes. They get it and they actually care about the team. They never pressured me to do anything I didn't want. Never asked me to change my style, always let me do what I want and just trusting that I'll create cool stuff. Didn't drop me when I broke my femur.

When they signed me I was dead broke. No car and like 500$ to my name. These dudes changed my life and I'm forever grateful for them supporting my dreams.

kungfupanda (May 7, 2018 at 22:28) (Below Threshold)
Answer: it’s because nobody huge has noticed this guy, and he’s still buying his own parts, travel, insurance, and everything else. Mongoose probably supports him with a freebie frame or discounted bike. Considering he’s killing it, hopefully next year he’s riding for someone who respects his efforts. (YT? Seems fitting)

Yahh (May 8, 2018 at 0:45) (Below Threshold)
At first glance I thought this was one of those retro/hanging-up-in-the-garage bike articles. Probably due to the look of the standover and swing-arm.

stefanfresh (May 8, 2018 at 2:28)
As if mongoose hasnt been around for ages.. someone ever heard of Steve Romaniuk???? Whats wrong with you people? You complai about bikes costing tons and money and then trash talk a guy riding an affordable bike. Sick stuff this is, sick stuff. Mutual benefit, its nice to hear stuff like that.

OsamaBeenRiding (May 8, 2018 at 3:22)
@peddlepusher15: You give an honest answer and people still put words in your mouth. Awesome to see you progress from 63rd St to Idaho springs now out to Utah. Keep doing you!

oldmanhucking (May 8, 2018 at 8:14)
@peddlepusher15: This is awesome to hear and good for you and Mongoose. Have been following you for quite some time now and has been fun watching you progress to where you are today. Keep up the great attitude and putting out the awesome content!

phobospwns (May 8, 2018 at 9:22)
@stefanfresh: Bingo. It's funny, people don't realize that Trek had their own littler foray into big box stores- Jazz bikes, anyone? Too young to remember? They, unlike whomever owned Mongoose brand at the time, didn't try to leverage their name to sell bikes (smart move), but they did make the same jump. It can be so tough to shake labels in this sport, eh?

I rode a Mongoose Pinn'r a few years back that I really, really enjoyed. It was a great bike. They've had some great riders over the years.

c1olin (May 8, 2018 at 15:24)
@alexhyland: I think Barkit's point was that Mongoose is even tighter because they have another cool rider.

stefanfresh (May 9, 2018 at 2:08)
I was being sarcastic, as in... hte bike is certainly not holding them back. Honestly its a shit storm out here

Solidsnake (May 9, 2018 at 5:31)
@peddlepusher15: Lil bro...ride that Mongoose like you stole it. F-- the haters. People forget about Mongoose's history back in the day. IMO they are still relevant.

preach (May 7, 2018 at 16:39)
Guess what? The bootr has been and still is legit. When Hyundai comes out with a legit contender people skoff at first but then they see. Mongoose is the same. They are for real

TBaggins (May 7, 2018 at 17:38)
It's their overall business model that keeps them at the department store level. A lot of their pro athletes are riding rigs that are custom made and have a Mongoose sticker slapped on them.

applepie (May 7, 2018 at 21:11)
I'd buy a Hyundai 1000 times before I'd buy a shitty dodge, Chevy etc. In reliability and customer satisfaction surveys American cars are consistently at the bottom where I live with Japanese and Korean cars at the top.

caseycaseman (May 8, 2018 at 7:24)
@dirtnapped: The bike clearly is not obstacle for anyone when you see how DJ rides. Anyone still blaming their bike needs sit down and stfu.

dirtnapped (May 8, 2018 at 9:25)
@caseycaseman: I'm very aware how he rides, the comment was directed towards the car. Absolutely nothing to do with the bike or DJ.

caseycaseman (Jun 15, 2018 at 6:48)
@dirtnapped: I was adding to your comment dude! agreeing with you in context of the article, and making a general statement to everyone who happened across our comments.

starpak (May 7, 2018 at 22:58)
Pro riders here are wondering (and analysing) why should someone stay with Mongoose. As if Mongoose is bad for you or you cannot be a pro and ride a Mongoose, man. But if the bike was coming, say, from a 'legit' company then everything is alright. Cool your boots.

cmcrawfo (May 7, 2018 at 18:10)
Why bother doing a bike check, if you are not going to elaborate on the only really interesting / unique feature on the bike? also, to say the bike has no shifters, when it clearly has a shifter... WTF pink bike.

kungfupanda (May 7, 2018 at 22:06)
The unique feature is that it’s a Mongoose being ridden by a privateer! This isn’t as much about how his bike is sick AF, as much as how he’s sick AF on this bike.

Shreddywhip (May 7, 2018 at 22:27)
@nuttypoolog: And he seems like a genuine dude, having fun, riding bikes. Never bite the hand that feeds you. I can still hear my mom. Straight up, words of wisdom. I know without good friends, solid riding buddies & my family- I would be crap on the trail. The talent starts and ends with the pilot. Seems to me, DJ is well on his way to making his dream even more of a reality. I'm stoked for him & wish him the best.

UHHHHHHHH what's that lever on the right side handlebar then? Does he shift between his two cassette sprockets with magic?

kungfupanda (May 7, 2018 at 22:20)
This is a bike check of a dude killing it as a privateer on a Mongoose. Elitists won’t understand, but everyone else should give respect for this.

AntonOP (May 8, 2018 at 7:03)
I am loving how the brands everyone used to knock and hate are pushing out bikes and good products. Look at kona, it use to be a joke with all the frames snapping and now it's a bike lots of people wouldn't mind owning or giving it a test run. Companies like mongoose and suntour are stepping up their game. I like it, looking forward to seeing what comes next

AntonOP (May 8, 2018 at 7:10)
Although mongoose was quite popular back in the day with the boot'r, and then it disappeared, kinda like morewood. Man, I have not seen a morewood in a VERY long time

Schizo (May 8, 2018 at 0:36)
If there's a company i dont get - it's mongoose. How are they still alive after so many years of what seems like last dying breaths is truly a mystery to me. They're so low profile, but still got killer riders signed up (Akrigg most notably).

They used to be everywhere, in the old Teocali/Boot'r days. And those were pretty good bikes, too!
I hope they can make a comeback to being an icon brand again, but they definitely have a gap to make up in terms of technology and development which they neglected for almost decade.

christianlund (May 7, 2018 at 17:43)
check his insta, and his recent edit airfields, the fakies are pretty dirty

iamamodel (May 8, 2018 at 20:37)
@c1olin: Thank you for that! Everyone should've watched that before posting. Flip to manual was soooo smooth. That 'Mongoose' sticker isn't exactly holding him back.

vinay (May 7, 2018 at 16:51)
I'm usually not one to be too picky about cable routing, but even to me the way the cable outer and brake hose approach the rear mech and rear brake caliper respectively doesn't seem too nice. Especially considering the chainstays are going to move with respect to those components. I'll leave it to someone else to complain about cable and hose passing under the bottom bracket.

bananowy (May 8, 2018 at 8:36)
What about the NX DH? Saying this is Mongoose's first DH bike would be ignorance coming from a newbie in the sport but from Pinkbike? More like deliberately ignoring the brand's whole history and glory days before they became department store bikes.

gibspaulding (May 7, 2018 at 16:05)
So a freecoaster on a dh bike? I'm confused why you can definitely see a shifter and derailleur cable in the photos though...

ccolagio (May 7, 2018 at 16:14)
Not a freecoaster. This is an "old" MTB trick. He shifts into a spacer on the rear hub that has no teeth and the chain just slides on the spacer. If you look close you can see it. The hub is just a regular Vault hub.

slipnjloc (May 7, 2018 at 19:46)
this article blows.. lets just tease you with this wonky drivetrain setup but not go into any detail of how it works.. oh but this can go backwards???? wtf better follow up with an article on the drivetrain....

nojzilla (May 7, 2018 at 22:46)
The cog is filed on the inside so it spins on the freehub for fakei stuff, think Arron Chase did it a while back

c1olin (May 8, 2018 at 15:58)
Imagine the chain sitting on top of that smooth metal spacer between the two cogs - slippery either way

adrennan (May 8, 2018 at 7:06)
just drop the standover some and it would be a much sicker looking bike but thats just personal taste.

adrennan (May 8, 2018 at 7:05)
i wouldnt be surprised if profile did it. they make freecoasters and dh spaced hubs.

mountainyj (May 8, 2018 at 10:09)
Chain growth....only way to make it work on a long travel full suspension bike would be to add an insane amount of slop into the freecoaster so it doesn’t reengage when you compress the suspension. This is easier and smoother

TBaggins (May 7, 2018 at 17:40)
Different materials for different styles. For DJ, carbon fiber composite is unnecessary and high-risk. For others, it's necessary to stay at the top level.
Post a Comment