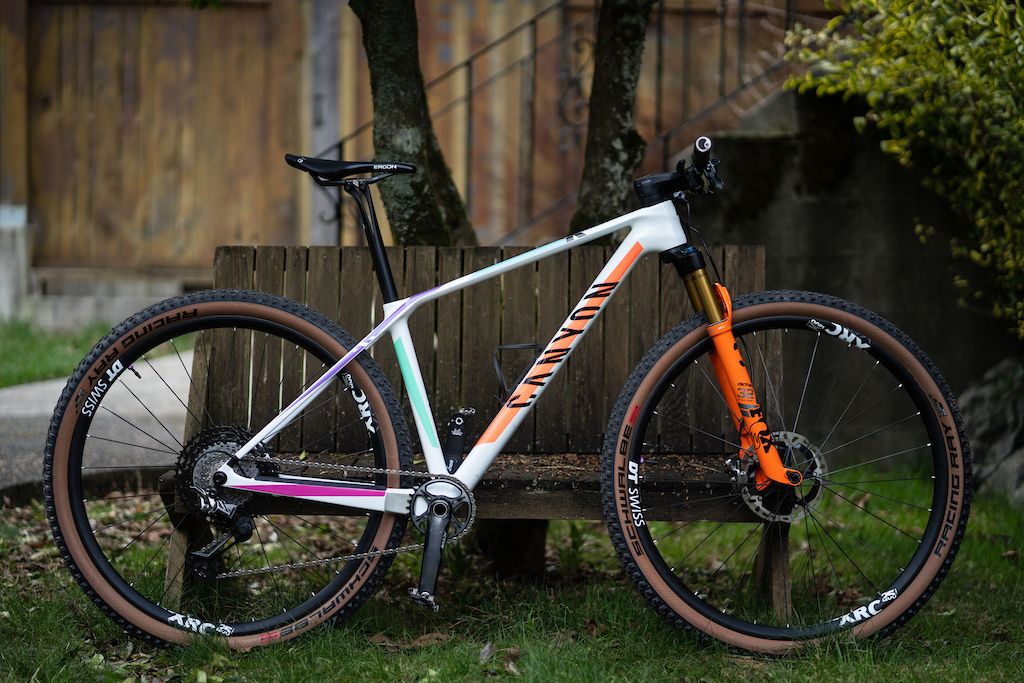 The Canyon website jokes that the CFR's ultralight frame is made from unicorn hair and with the weight and color of this bike, you'd almost believe it.
Olympian Emily Batty has teamed up with Canyon after more than a decade with Trek. With this change, Emily has new custom-painted bikes, a new colorful kit, and a new teammate, Canadian U23 National Champion Laurie Arsenault, who will be riding and racing a similar bike setup to Emily's.

Emily’s two race bikes will be the Canyon Lux CF SLX and the Canyon Exceed CFR. Both will feature Canyon's integrated cockpit, Schwalbe tires, XTR everything, and DT Swiss 1200 wheels. 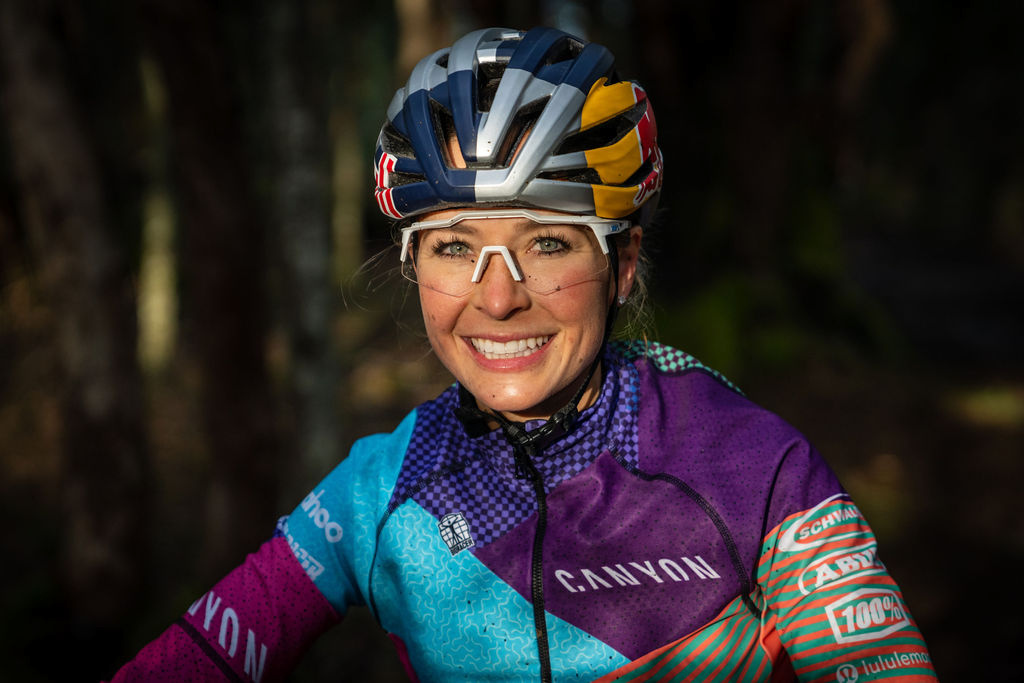 The Exceed CFR frame claims to weigh just 835g / 1.84 lbs in size medium, making it one of the lightest hardtails money can buy (just behind the Specialized Epic and Unno Aora, which both weigh a claimed 790g). Although it's a purebred XC race bike through and through, it has relatively balanced geometry designed to make it shine both uphill and back down, with a 69-degree head tube angle, a 75-degree seat tube angle, and a 392mm reach on Emily's XS bike.

Canyon says this version hasn't been weighed yet, but considering the stock build comes to about 19 lbs, it's likely that this one is pretty absurdly light.

The Fox Factory 32 is the step-cast version, which cuts down weight and aerodynamic resistance by narrowing the fork's lowers, thereby also providing spoke and rotor clearance. 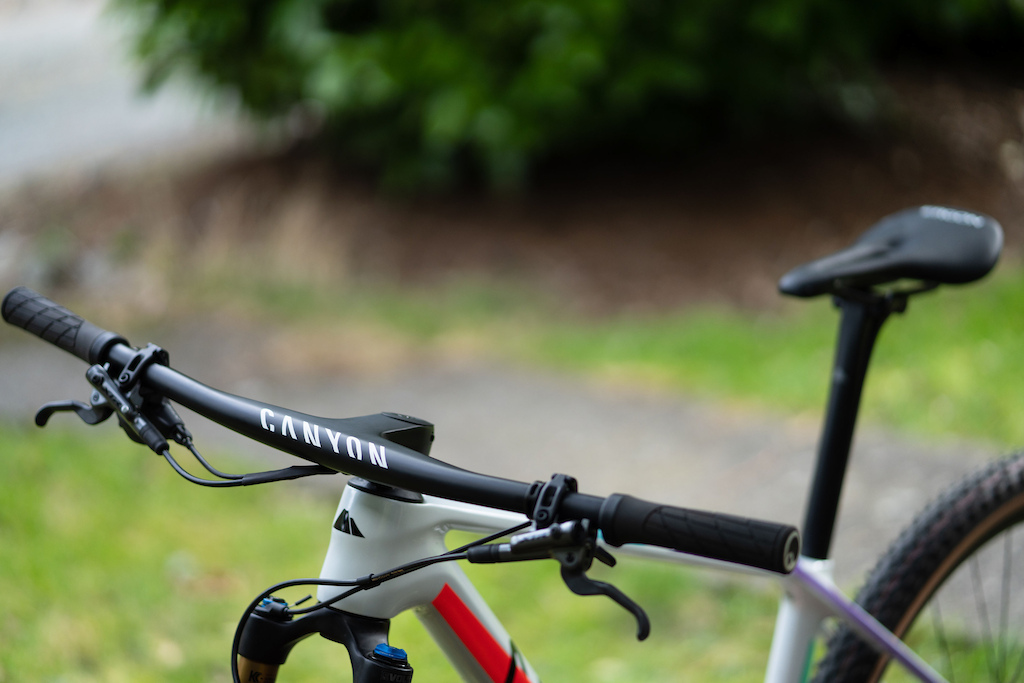 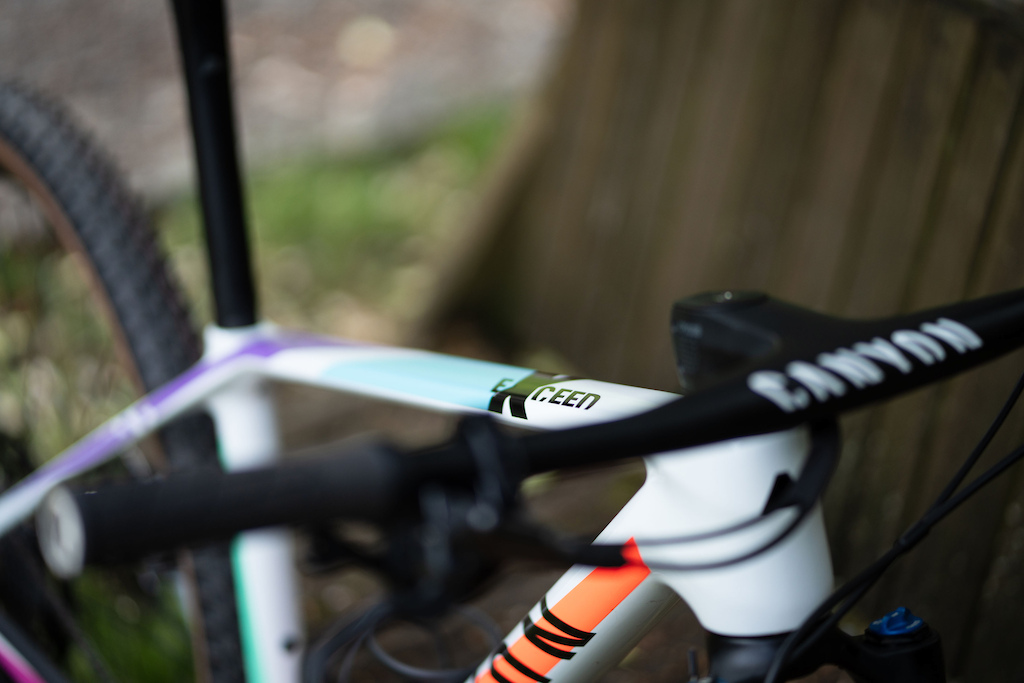 Canyon's integrated cockpit is one of the cool weight-saving features of this bike.
Emily runs Canyon's integrated cockpit CP008 with a 70mm stem and negative rise of 17 degrees, keeping her in an aggressive race position. The intriguing one-piece bar and stem combo, designed specifically for Canyon's XC racers, helps minimize weight and improve aerodynamics. It also features a unique cable routing system with ports in the headset that allow the rear derailleur and brake cables to enter the frame with minimal extra length, further shaving grams. 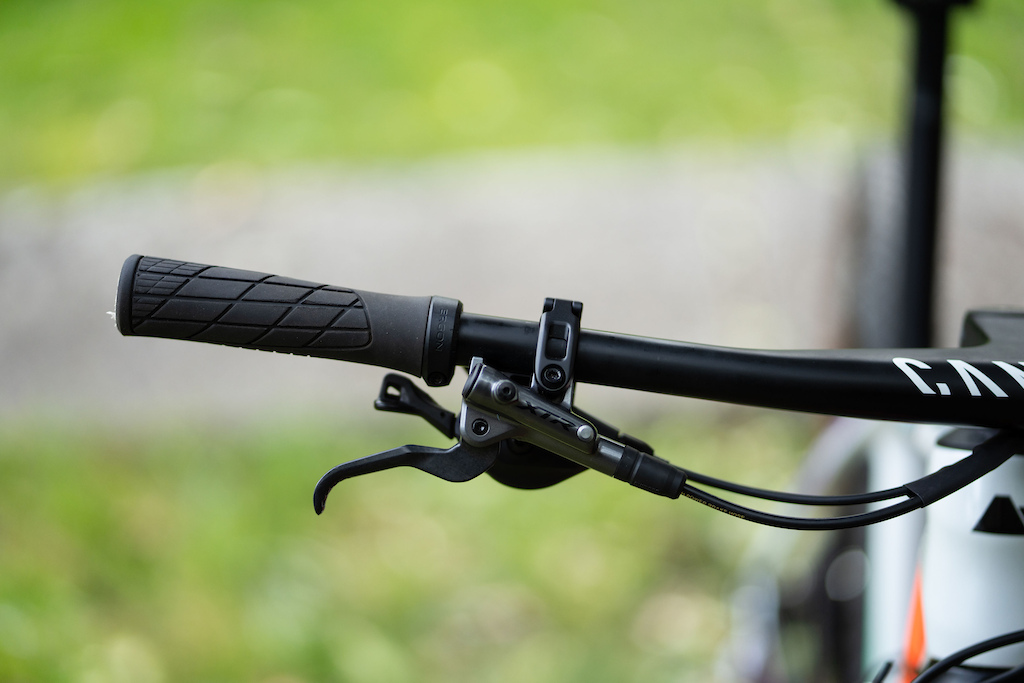 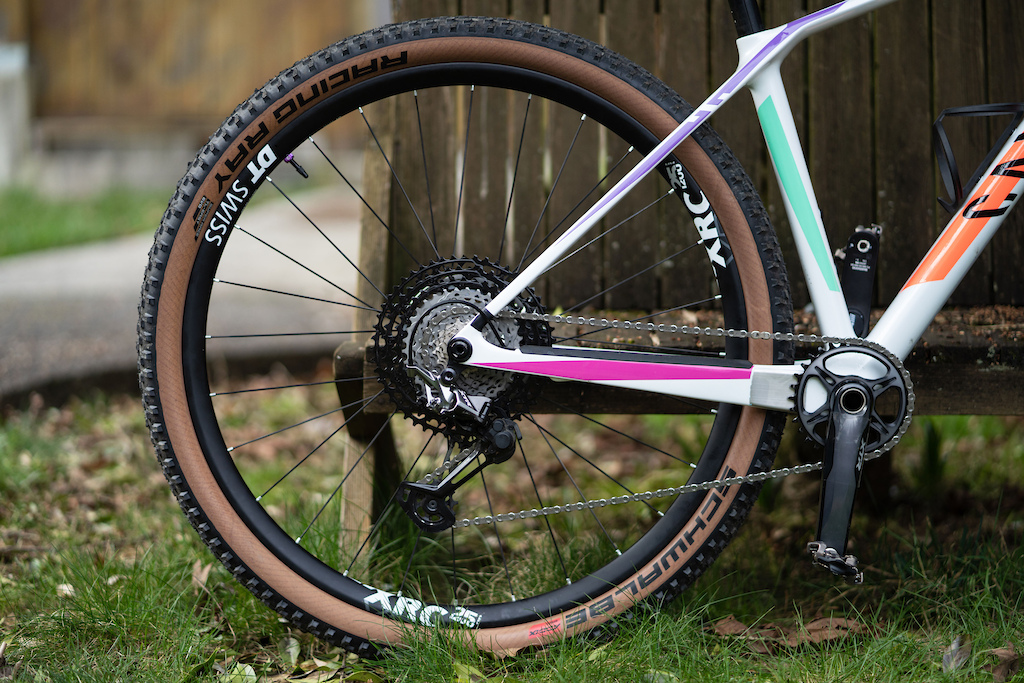 XTR everything.
The team will run Shimano XTR brakes, pedals, and 1x12 drivetrains. Unlike many XC competitors who will be racing SRAM's AXS wireless system, the Shimano racers rely on mechanical systems, though we may see that change sooner rather than later. A 10-51 cassette provides plenty of range, especially using chainrings from 32t to 36t depending on the course. 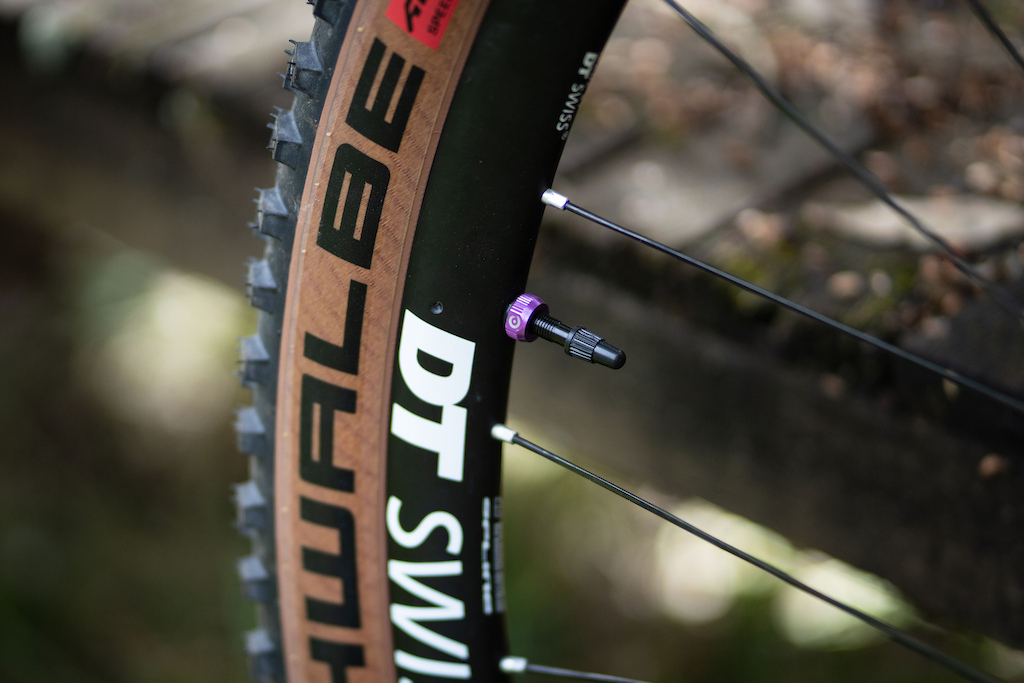 Tan walls and stylish valve lock nuts add flair to this bike.
Each bike will have a Schwalbe Racing Ralph 2.25" (rear) and Racing Ray 2.25" (front) mounted on DT Swiss' top-of-the-line XRC 1200 wheels. There will be some variation here, with the internal rim width of either 25mm or 30mm depending on the course and tire pressure ranging from 18-23 PSI. 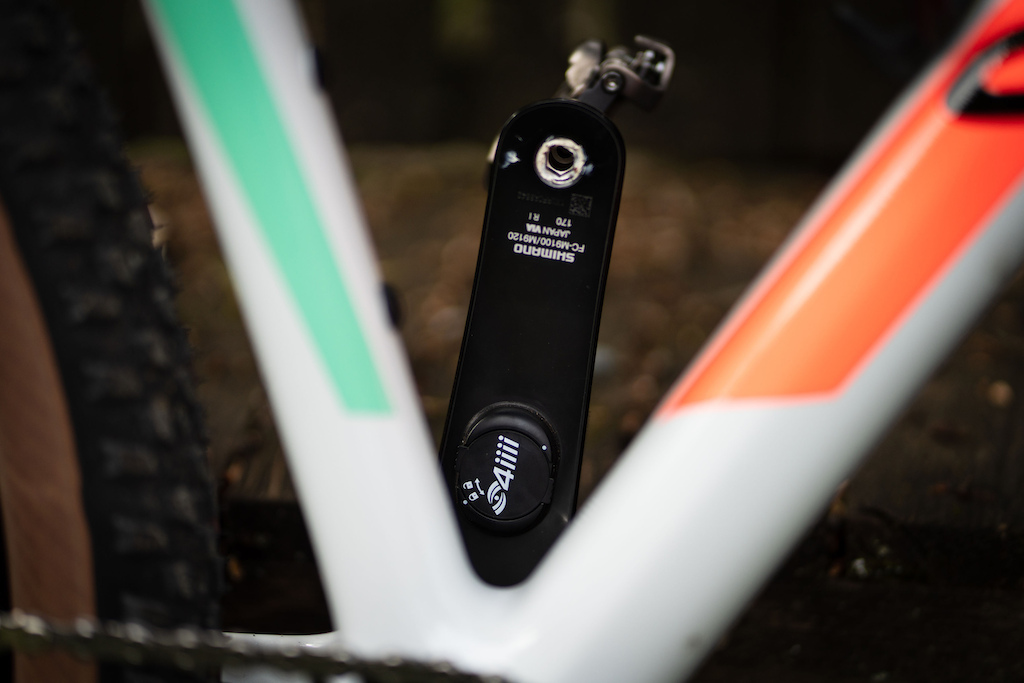 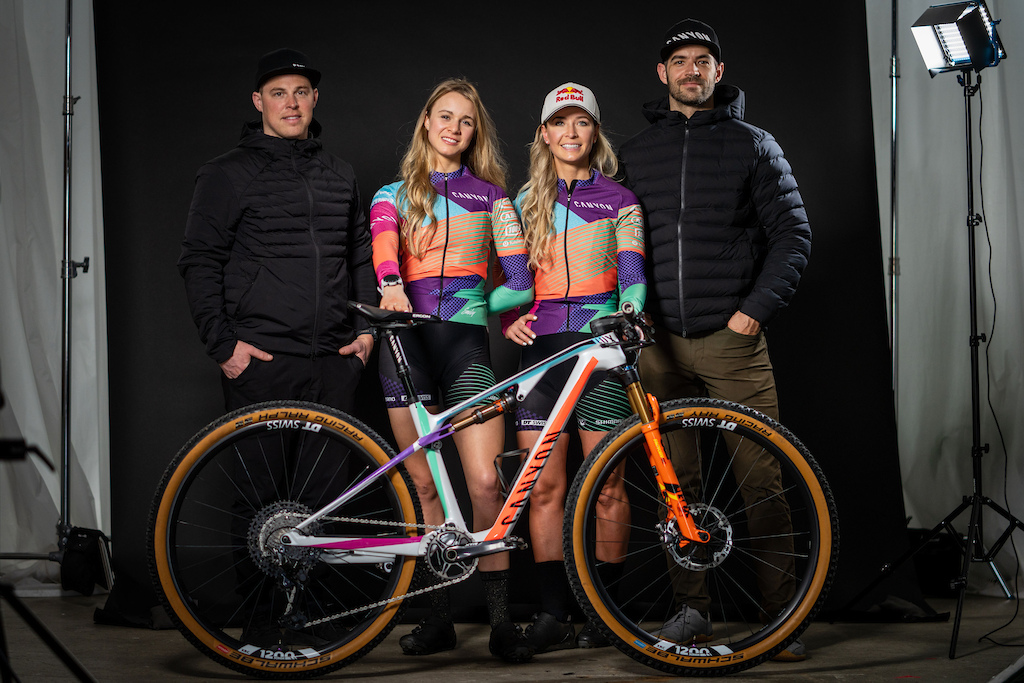 The team: Emily Batty, Laurie Arsenault, mechanic Mark Batty, and manager / trainer / Emily's husband Adam Morka.
The Canyon Lux CF SLX will take over when the courses demand more suspension, and will sport almost the same parts as the Exceed CFR, with the addition of a Fox DPS Float shock at 110 PSI.

The Canadian duo is set to start the race season April 24th at Bike the Rock for the 20th anniversary of the classic German event. For blog posts, schedule information, and more about the team, visit mtbracing.com.

mi-bike (Mar 17, 2021 at 9:51)
@CH125: I'm always shocked to read that the opinions of fans like yourself are not considered when these decisions are made. You deserved better.

Thirty3 (Mar 17, 2021 at 10:28)
@mi-bike: Half the fun about being a sports fan is having thoughts, discussions and opinions about uniforms, players/racers or the sport itself with like minded sports fans. Do you agree?

In turn, you may agree with me that the *other* half of the fun is making snarky comments in the comment section of a popular website of the your sport of choice.

jmhills (Mar 18, 2021 at 4:28)
@rrolly: As someone that teaches in a high school and was born in the 80s, I can 100% tell you that you are massively wrong. Color combos like this have never gone away. Kids are constantly wearing stuff like this. I have even see Hypercolor jackets.

rrolly (Mar 18, 2021 at 7:36)
@jmhills: As someone that also teaches in a high school and was a teen in the 80's, I can tell you that you're welcome to your opinion. There are trends that last, and others that don't. I would bet that this one won't. I would be surprised if they rode the same kits next year. And three years from now if you asked them to chose their favourites, I would be very surprised if they chose this one.

dorkbike (Mar 17, 2021 at 9:17)
Makes you wonder if Laurie Arsenault feels like the (4th) 5th wheel with the Batty family team? Jokes aside; Emily appears to be happier being on the Canyon program. Wishing this team butt-kicking results in the future.

privateer-wheels (Mar 17, 2021 at 11:24) (Below Threshold)
@Cerrone: Trim level acronyms like SX, LS, EX, SE, LX, SLX, GT, XT, XTR are not something Shimano came up with. These are very common in the auto industry. You can buy a Subaru Forester XT, a Ford F-150 XTR. I think we all know the Subaru doesn't come with an XT drive-train. And we can be just as certain the F-150 is not equipped with the new XTR 9100 group set. And they are not named after Shimano are more than the Canyon is. I see where the confusion might come in when someone doesn't realize Shimano didn't invent these acronyms. But now yuo know, they didn't, and they can be applied to frames, cars, trucks, boats, and whatever else.

snowwcold55 (Mar 17, 2021 at 12:26)
@privateer-wheels: Different concept. If the auto industry utilized only 1 of 2 tire trims that had standardized names that conflicted w/ the name of the vehicle itself, it would be just as confusing (and a more relatable analog in this scenario). I.e. if the Bridgestone SLX and the BFG GX were the ONLY major tires available for ALL vehicles, and Ford named their new car the F-150 GX, the consumer would assume the GX tire comes included in that spec.

It is absolutely a marketing miss to utilize the same naming convention of another product that is immediately recognizable in the industry and then up-spec, as a skimming consumer will assume that it is specced w/ the very recognizable product. Marketers and product managers should be making things as simple as possible for the consumer (remember, we're all kinda dumb) to limit the risk of confusion.

Cerrone (Mar 17, 2021 at 13:26)
@privateer-wheels: Yeah, my treadmill has XTR in the name, but it isn't confusing...because it's a treadmill. Of course other products have trim level acronyms. Of course Shimano didn't even that idea.

If somebody told me they bought a new MOUNTAIN BIKE and rattled off SLX, of course I'm going to think it has a Shimano SLX build level. Of all other acronym possibilities they fell on SLX after Shimano has had it for years and years? Not the brightest move.
Just wait til I start a new company that makes MTB bars and stems. I'll call it FaceRace. And I'll have models called X01, Advent, and XT. Nobody should get confused right?

privateer-wheels (Mar 17, 2021 at 14:03)
My apologies. Sincerely. This isn't really something I would sweat about myself, but by all means fill your boots hombres.

snowwcold55 (Mar 18, 2021 at 5:33)
@privateer-wheels: Not sweating it - just wanted to clarify OPs position as it may be helpful insight for the brand and their naming conventions moving forward.

The places they’ll run the hard tail are the places weight is critical, so kind of makes sense not to have the dropper on the Exceed.

Breeconay (Mar 17, 2021 at 12:59)
Gorgeous bike and kit. Looking forward to seeing it and the lux in action. Any clue when ambitions kicks off again?

FarmerJohn (Mar 17, 2021 at 12:07)
Does anyone think Unicorn jokes are funny anymore? Seems like that's Millennial Karen level crap these days. Right up there with calling someone out on their "Sock Game"