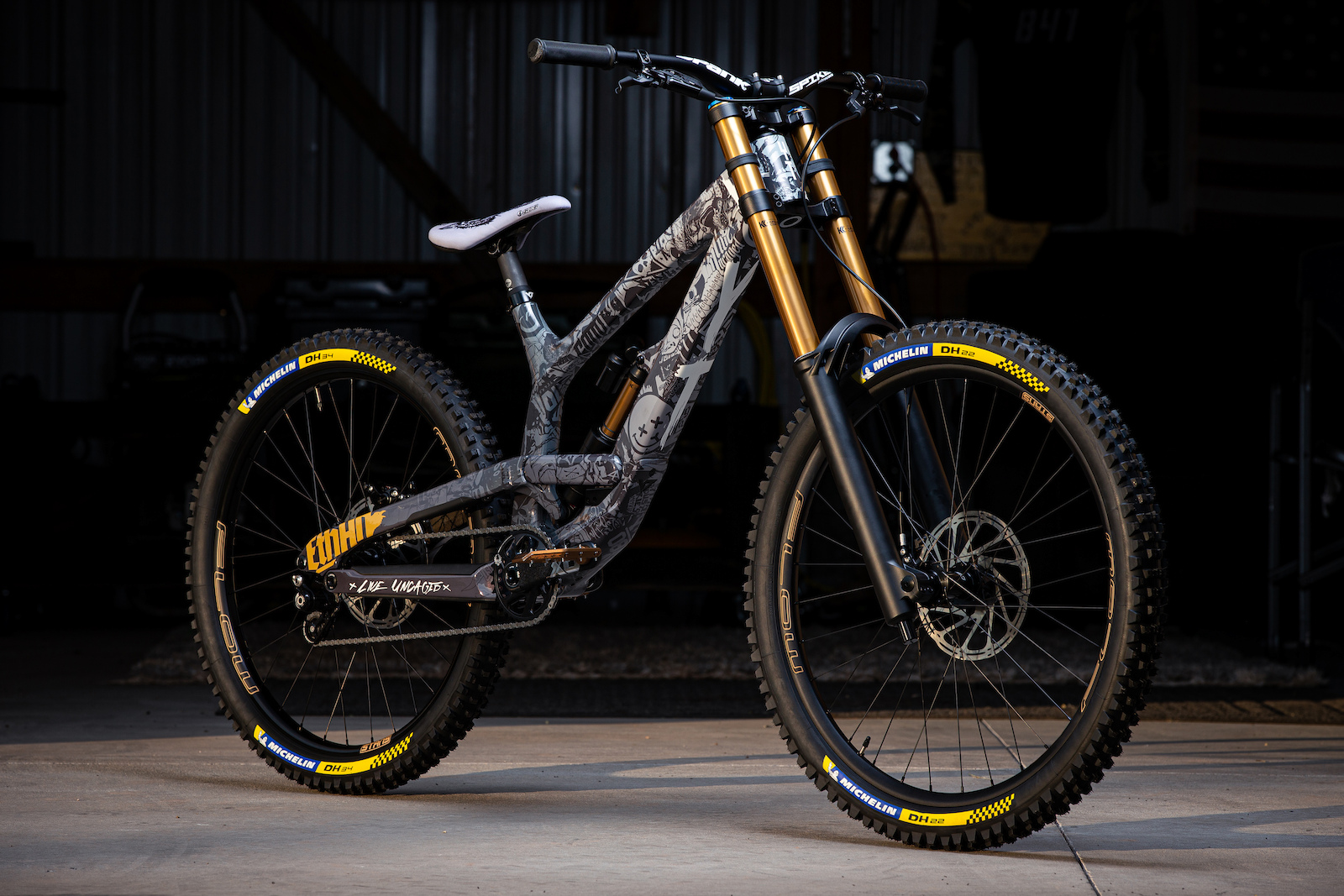 BIKE CHECK
Ethan Nell's
YT Tues
Photography by: Peter Jamison
This year marks the tenth anniversary of the YT Tues platform. YT's downhill bike was the first to properly propel the brand from a small dirt jump frame brand into the wider mountain bike mainstream and to celebrate that fact, the German brand has made a custom-designed frame for Ethan Nell to ride at Rampage. The 24-year-old American will be heading to his fourth Rampage on this bike and will be looking to build on the two bronze medals he won in 2017 and 2018.

The design is made up of illustrations from the past decade of YT's Graphics Department. Because of the technicality of the sticker bomb design, YT turned to Riesel Design to stretch wrap the frame as opposed to painting it. 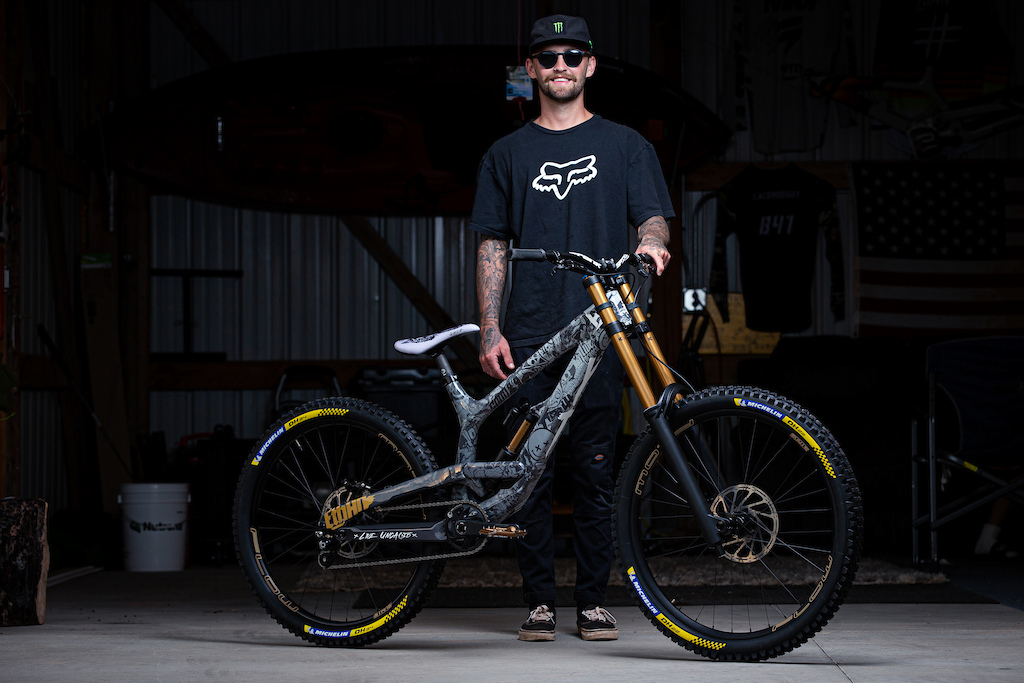 The design concept combined a multitude of sketches from past years of the YT Graphics Department. 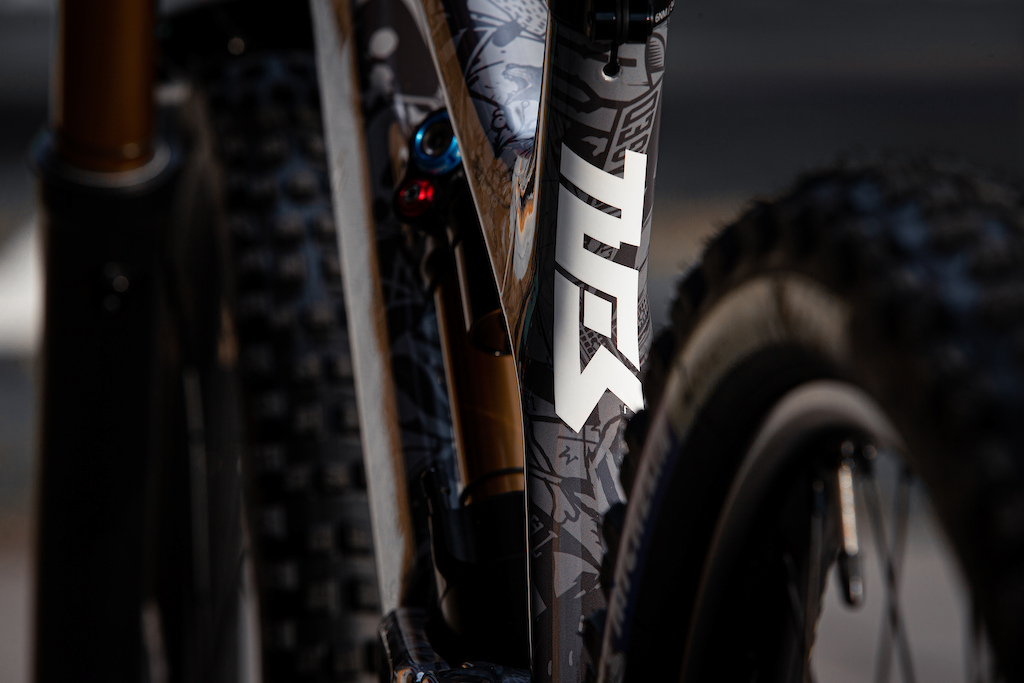 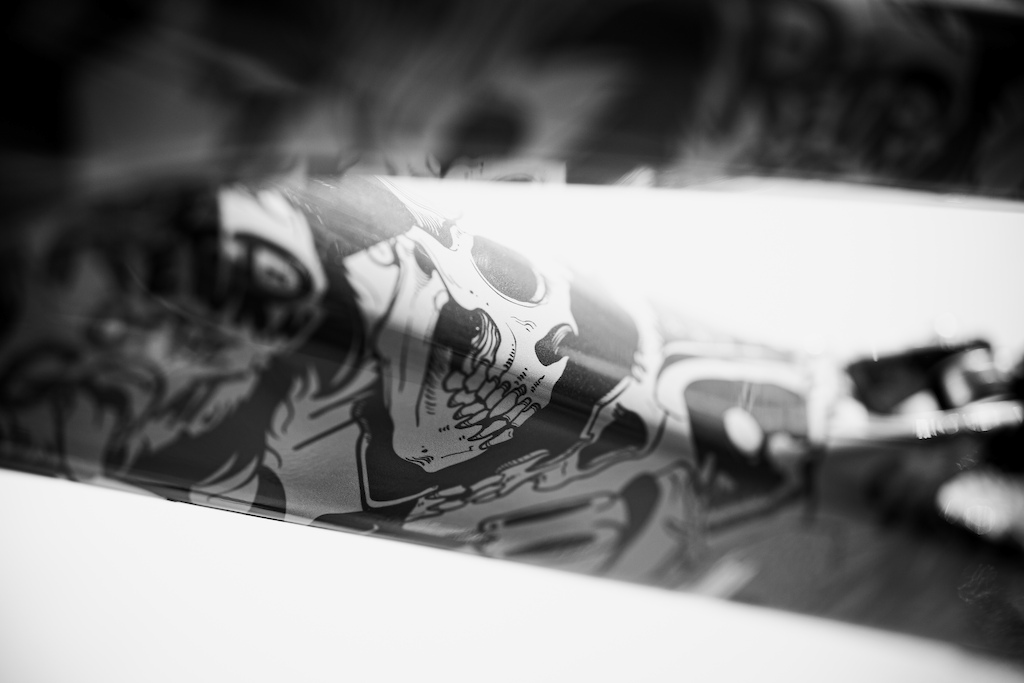 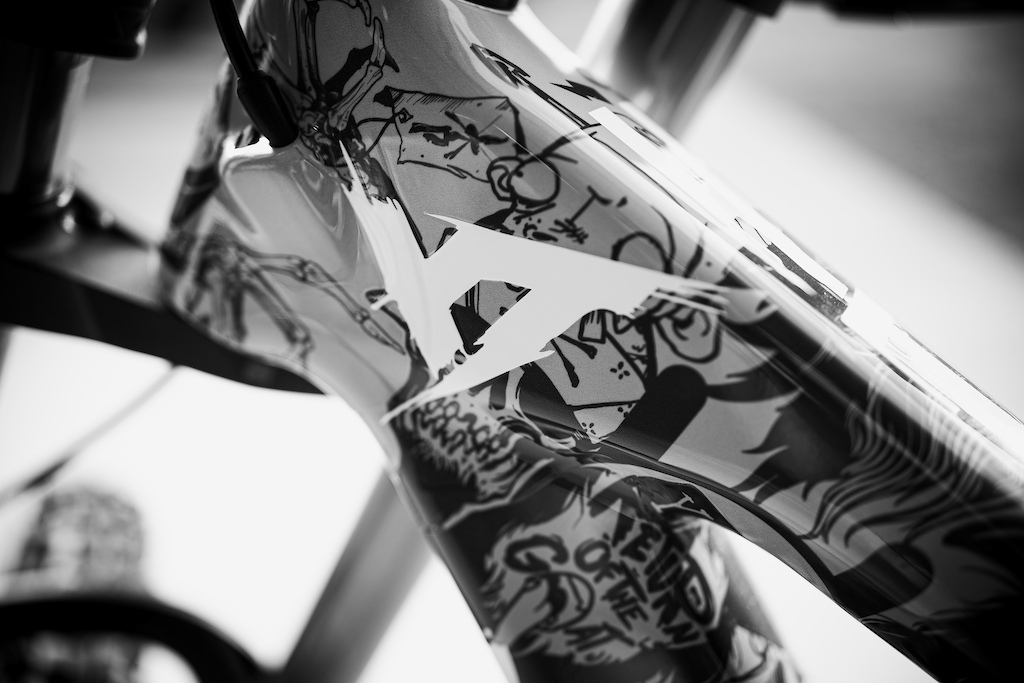 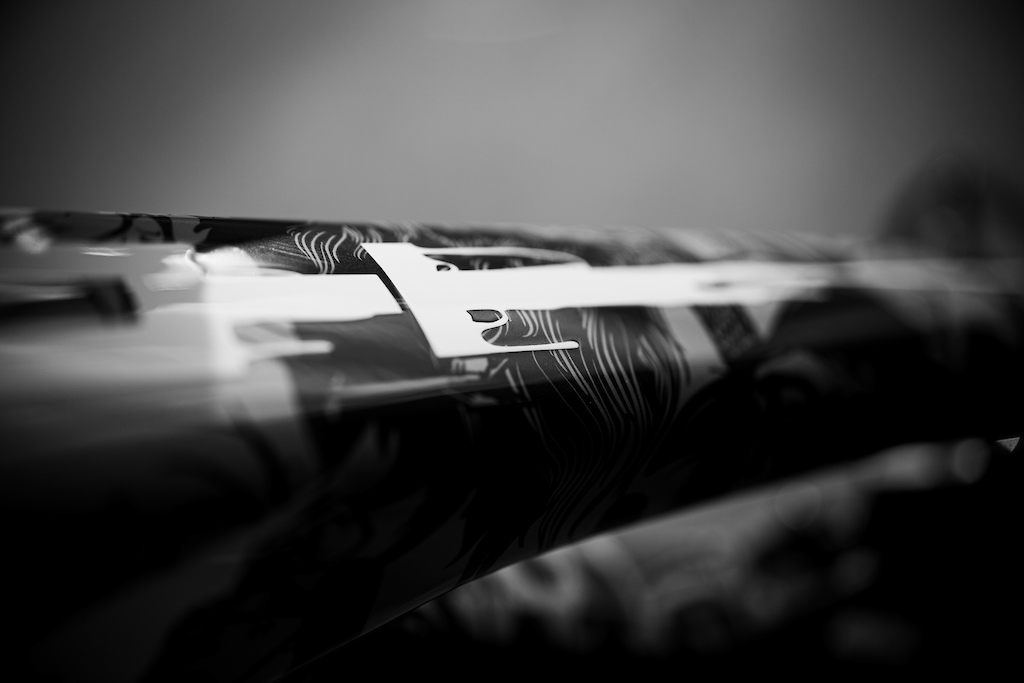 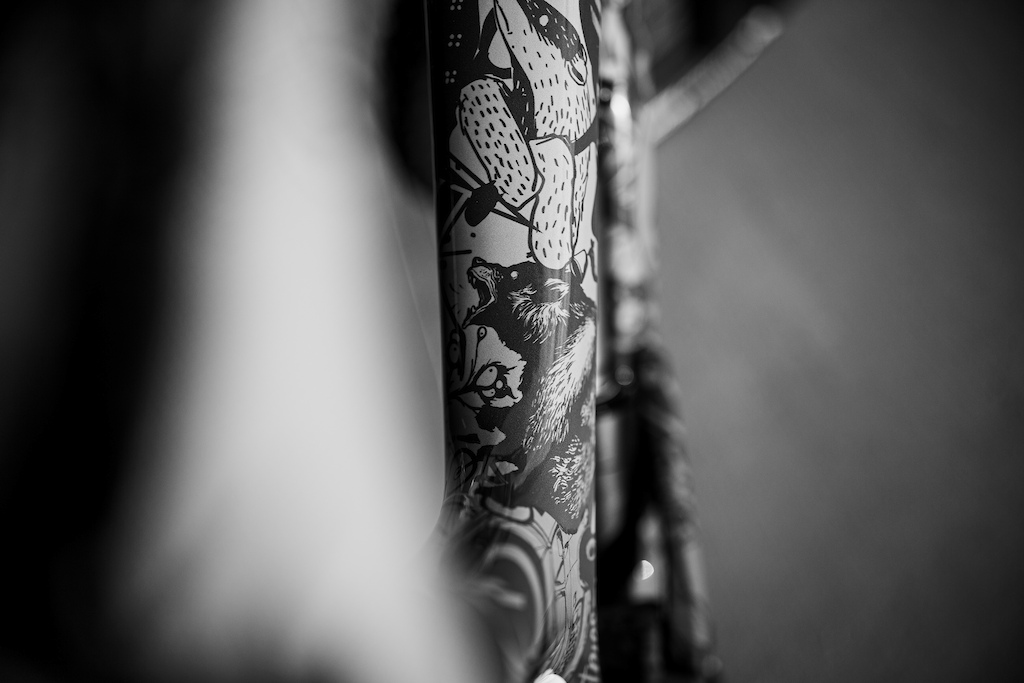 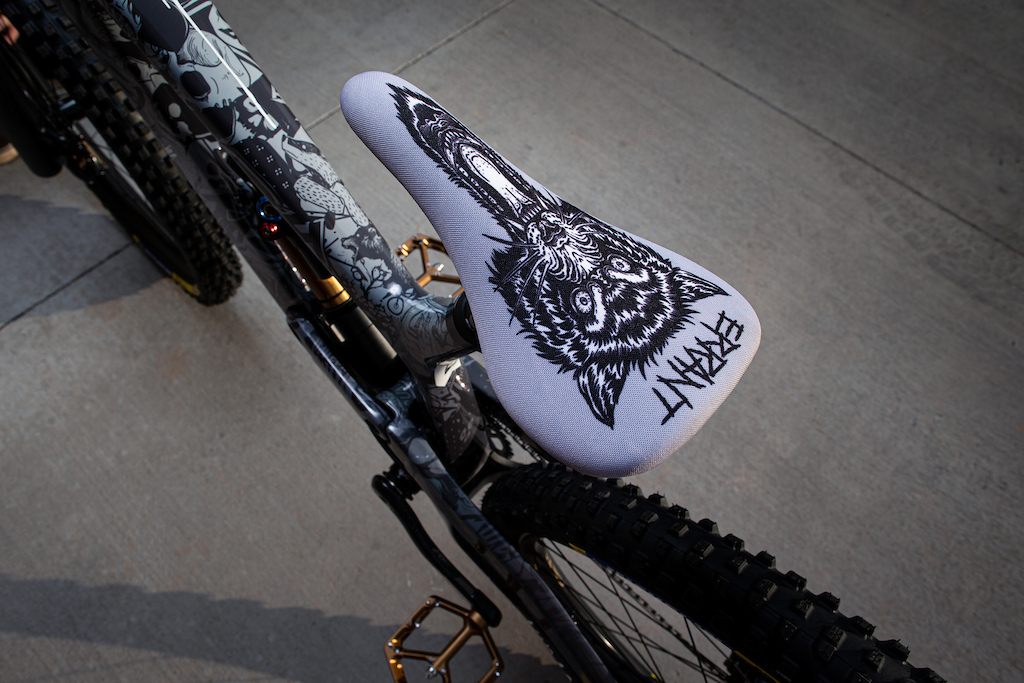 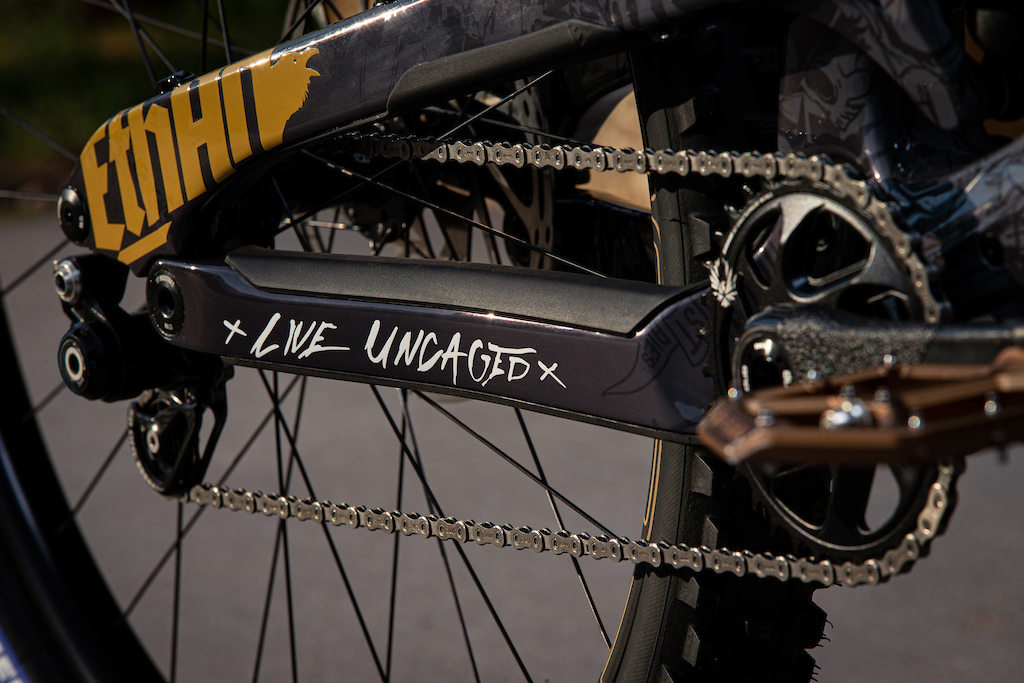 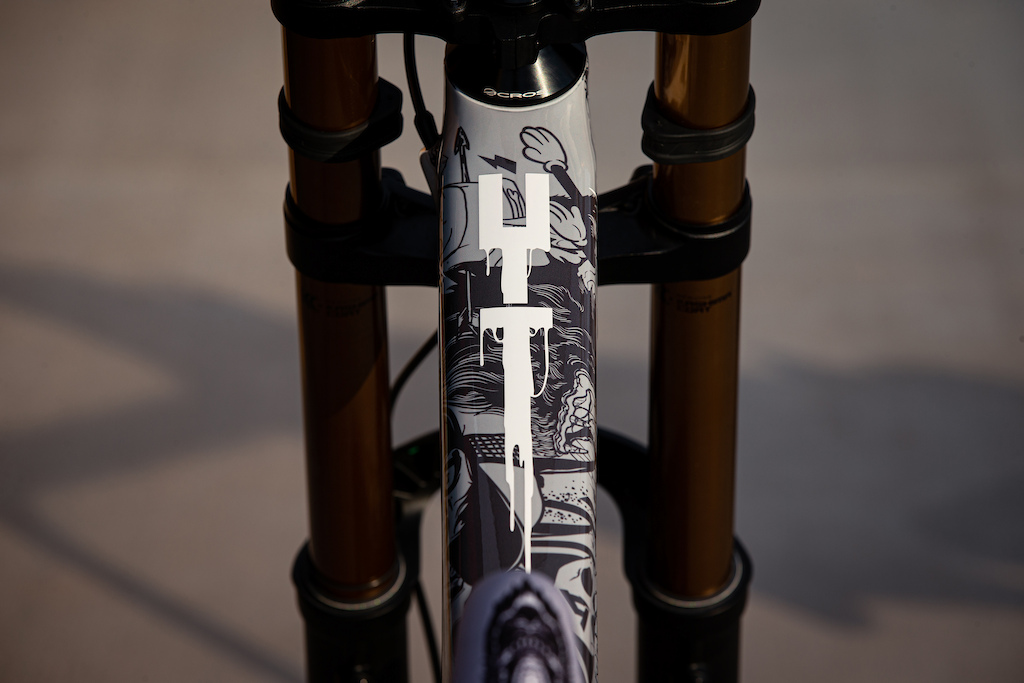 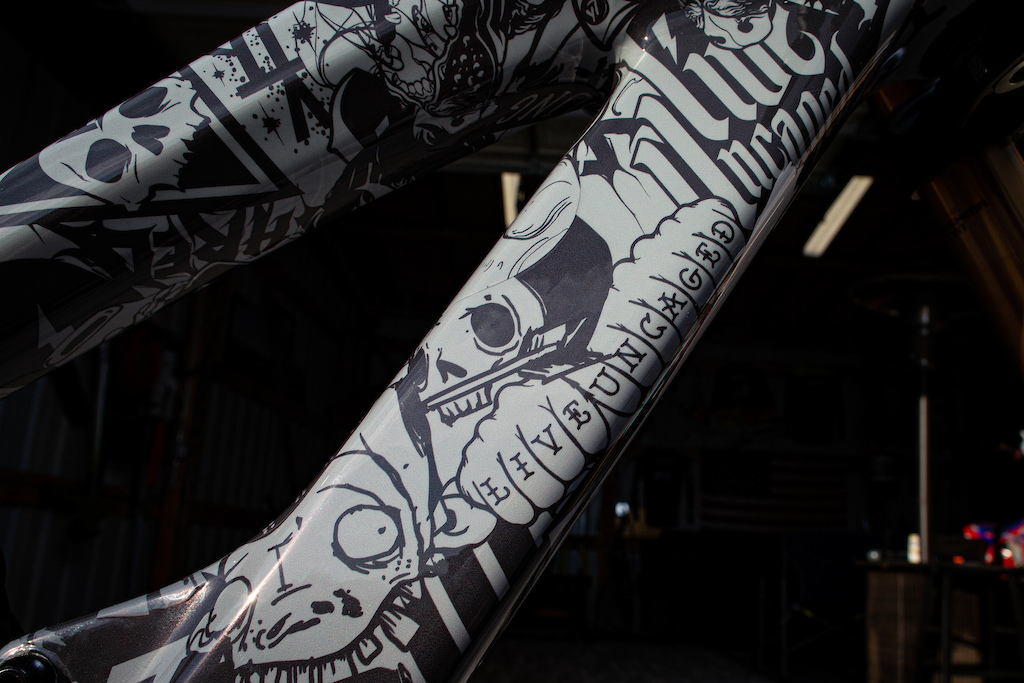 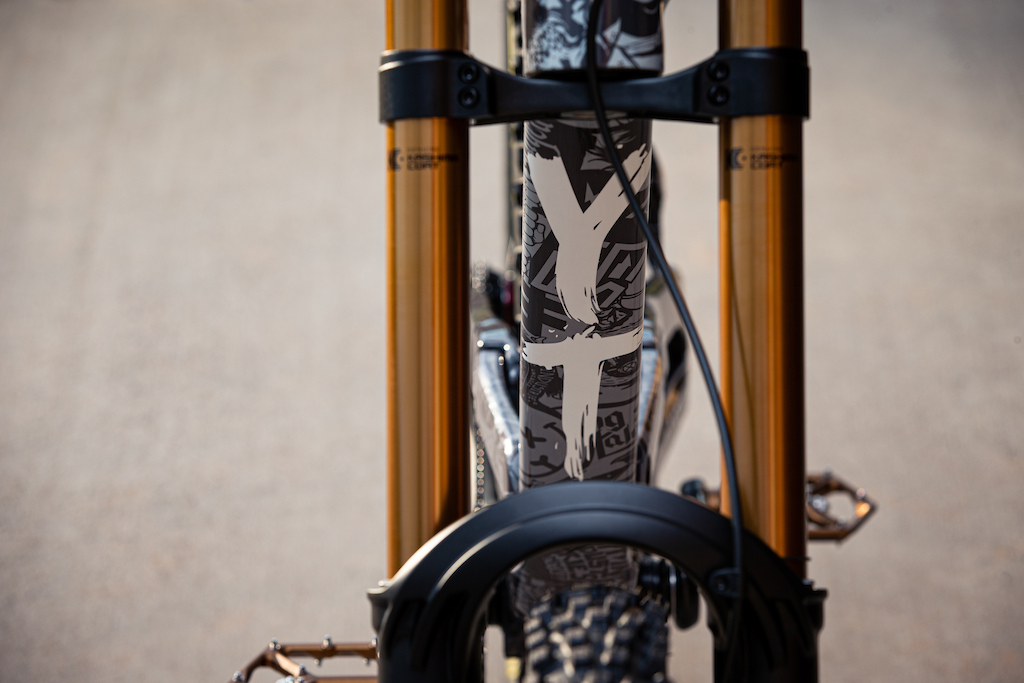 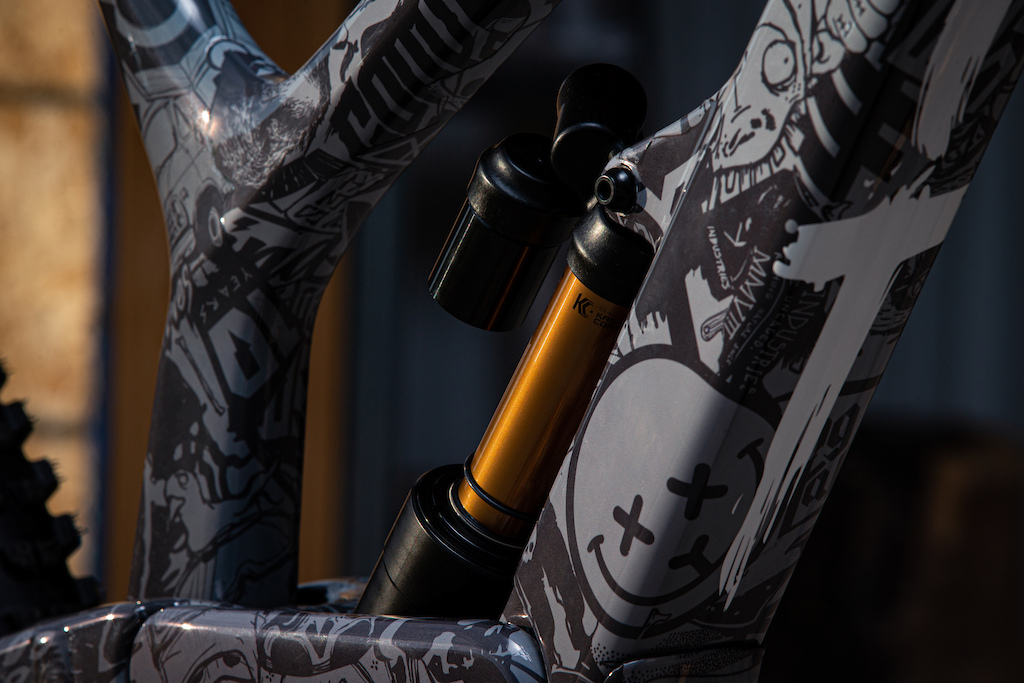 DoubleCrownAddict (Oct 8, 2021 at 7:07) (Below Threshold)
Jaw dropping originality here. Where and how did they get the idea to put skulls on a YT? So original!

rieseldesign (Oct 8, 2021 at 7:27)
@NicolaZesty314: the demand for that is really low :-( But we promise to consider it in our next product meeting, if this comment gets at least 50 upvotes

DoubleCrownDicked (Oct 8, 2021 at 10:38)
@DoubleCrownAddict: It's starts with not being forum troll douches.

giantwhip (Oct 8, 2021 at 21:25)
@DoubleCrownAddict: you really need to give your head a shake and refrain from these kind of posts

jackalope (Oct 8, 2021 at 6:22)
The nano-hoop is for photos only, since as others have already stated, you would probably spontaneously combust if you were foolish enough to ride such a dinosauric abomination.

ReeferSouthrland (Oct 8, 2021 at 6:33)
Do 26" wheels still roll, they seem odd and scary since the first years of Rampage? I'm going to go to my happy place to sort this out.

live4trails (Oct 8, 2021 at 12:19)
I hope all the bike manufacturers that stopped offering wheel size options are taking notes. I feel like the companies i wanted to support this year turned into used car salesmen and tried to force me onto a wheel size i didnt want.

Aptlynamed (Oct 8, 2021 at 5:38)
According to this article Fox reserves the Fox brand sponsorships for racers only, and freeriders were moved to Marzocchi: www.pinkbike.com/news/brett-rheeder-to-ride-without-suspension-sponsor-in-2021.html

Bragelonne (Oct 8, 2021 at 13:21)
As a former YT Tues owner, Dear YT, GO FUCK YOURSELF. Best of luck to Ethan. Hopefully that joke of a brand made sure the pivots are aligned and the bearing aren't DOA for this custom-made bike, because warranting any part WILL TAKE YEARS. It does not look like there are any E13 components on it, so at least he got that going for him.

goaskalice (Oct 8, 2021 at 7:09)
There's a great video by Calvin Huth (No Bad Days on YouTube) about Ethan Nell's Rampage journey a couple of years ago. Killer soundtrack, too.

I've been thinking about it as I only use my DH bike in the park anyway...

chriskneeland (Oct 8, 2021 at 15:46)
@MikeyMT: Yes. It's infinite adjust. It slides horizontally so you can put it on any gear you want. Not sure how tight it would get on the bigger cogs, but it's got a full range side to side.

aljoburr (Oct 8, 2021 at 5:36)
Funny that used a painted frame, then sticker bombed rather than paint, when was already painted?

m1dg3t (Oct 8, 2021 at 6:03) (Below Threshold)
You enjoy being part of a live drug trial? Anyone who wants to get vaccinated should, and those that don't should not be ridiculed either (provided they follow the other pandemic guidelines of course) or forced/coerced to take it.

I'll stick to masks, OCD level handwashing & social distancing (in all it's forms) as long as I can. I think it was the Moderna CEO who was on Canadian TV yesterday telling the government to Ok booster shots. Not asking. Not suggesting.

Arierep (Oct 8, 2021 at 6:11)
Please give me a comprehensive list of every single one of your opinions on every imaginable topic so I can decide if you should have a platform here or not. Thank you

Everyone can have/share an opinion, as long as it's the same as yours. Right? LoL GTFOH lemming.

nskerb (Oct 8, 2021 at 6:58) (Below Threshold)
You realize that high performance athletes are some of the least vaccinated people right now right? I'd say a large majority of the people that get featured on this site are not jabbed.

megaold (Oct 8, 2021 at 8:17)
@nskerb: Don't most people who cross international borders (i.e. every non-American competing in Rampage and most pro mountainbikers competing outside their home country for an event) have to provide proof of vaccination as part of their ability to enter foreign countries?

m1dg3t (Oct 8, 2021 at 9:06)
@madmon: LoL. Don't lump me in with those mouth breathing troglodytes. Seems this comment section is full of pretentious arseholes.

m1dg3t (Oct 8, 2021 at 9:08)
@megaold: I believe this to be the case. Simply traveling within Canada via air/rail without vaccination is impossible. Unless you're rich I don't think you can get around it.

nskerb (Oct 8, 2021 at 10:04)
@megaold: There are a lot of ways (which are very tedious and cumbersome) to get around those requirements. Mainly quarantining and lots of testing.

I am not anti-vaxx in any sense. I got the jab, not even slightly worried. I'm just saying that pro athletes are as a whole significantly less vaccinated than the general population.

Bragelonne (Oct 8, 2021 at 13:16)
@m1dg3t: LOL, that's the sort of f*cking retarded shit you expect from Albertans, you're the proof that our great country has f*cktards EVERYWHERE.