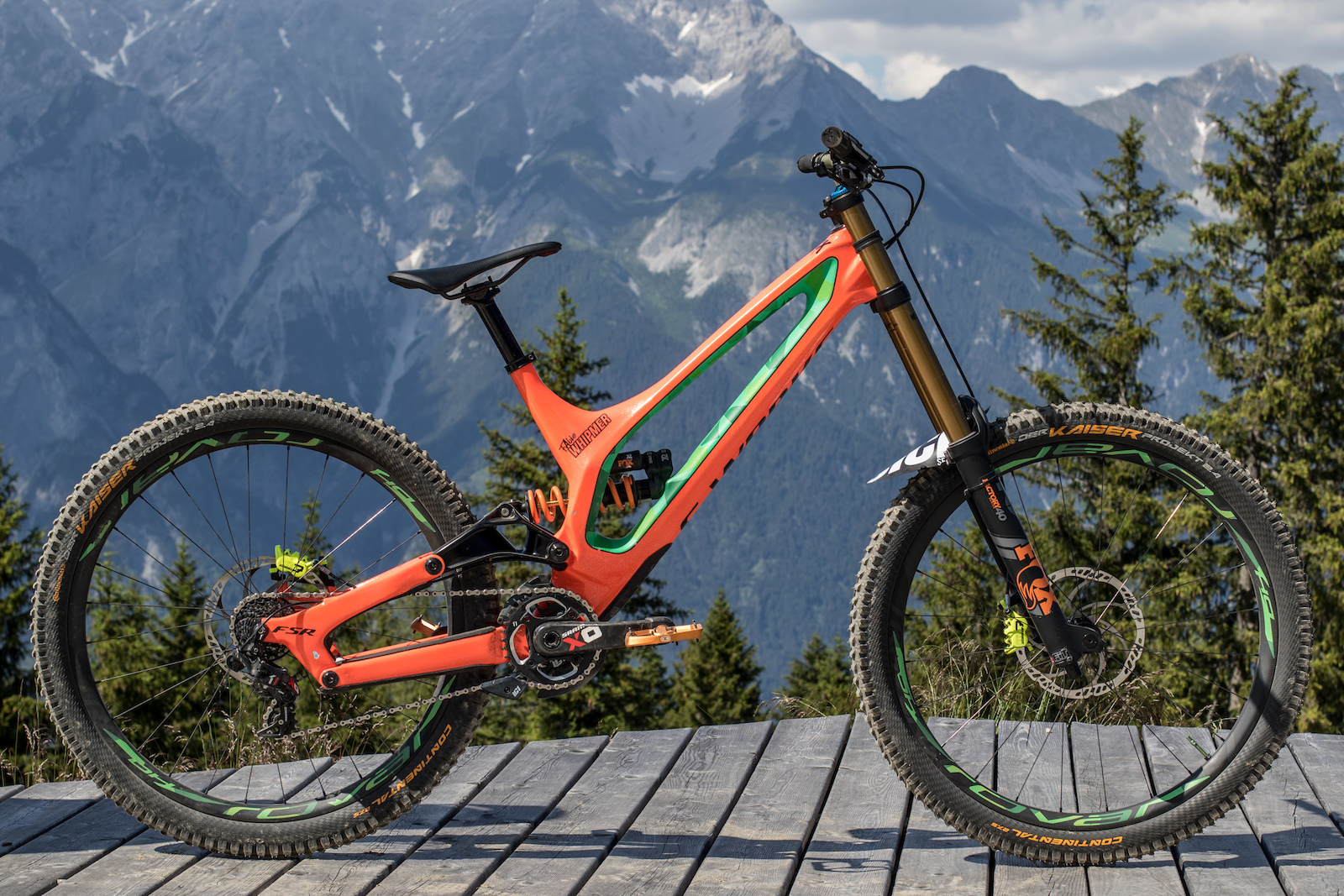 BIKE CHECK
Fabio Wibmer's
Specialized S-Works Demo 8
Photography by Ralf Hauser
"I am your biggest fan!" cries the kid from the last row of the signature session at the POC booth. He's not the only one getting excited to see the YouTube star in person, as Fabio Wibmer constantly has to stop for a selfie or signature with a fan when he’s walking or riding along the event area at Crankworx Innsbruck. He’s a social media phenomenon, and few other riders at the event have a similar impact on the visitors.

His riding does the talking, and while he’s still best known for his inventive street trials escapades, it shouldn’t come as a surprise that he can hold his own on a big bike, going massively sideways at the Whip-Off Championships or picking up an Austrian National downhill title on the side in 2016. Just as eye-catching as his bike handling skills is the bike itself. A custom painted Specialized S-Works Demo 8. With the new Specialized Stumpjumper for everyday rides, an Enduro model, and his Inspired Trials bike in the shed, he's got the right tool for every thinkable job. 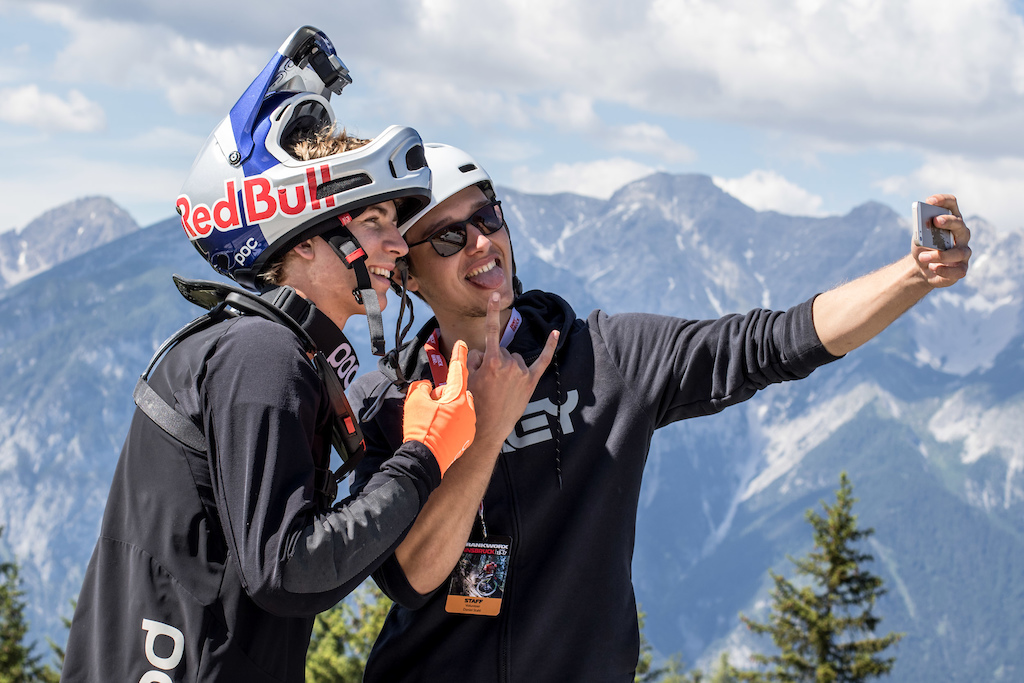 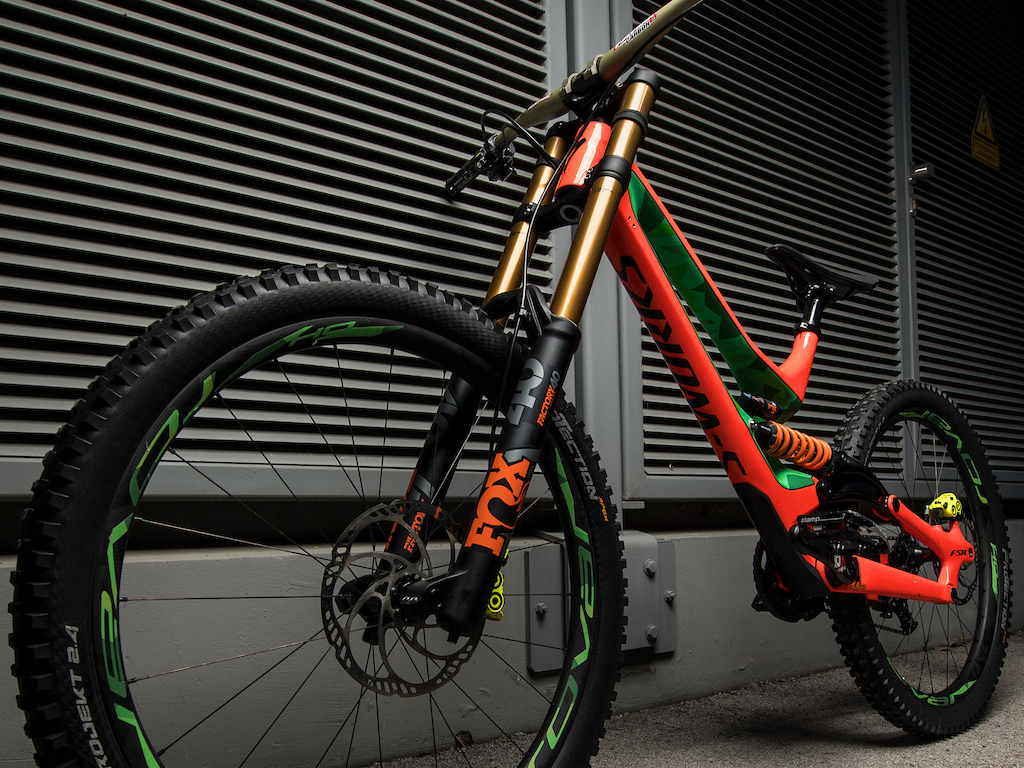 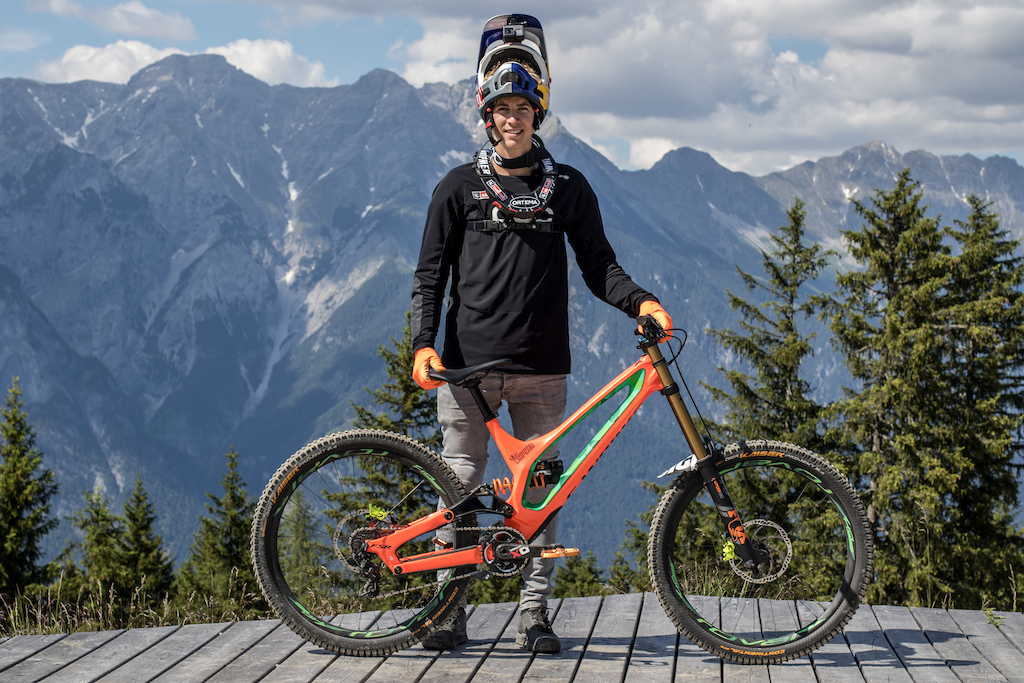 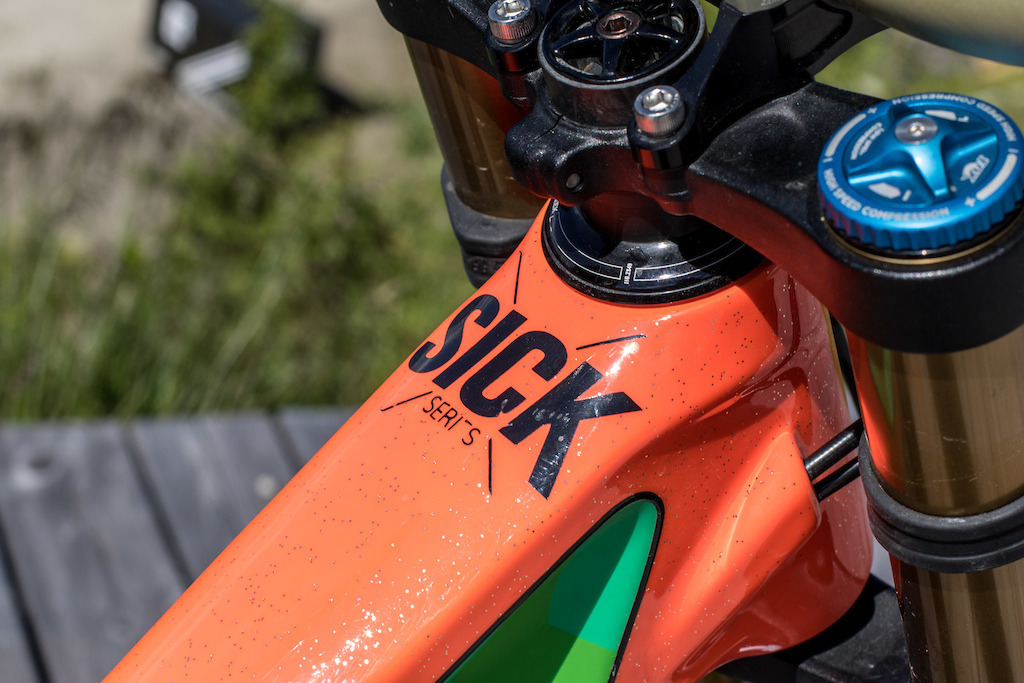 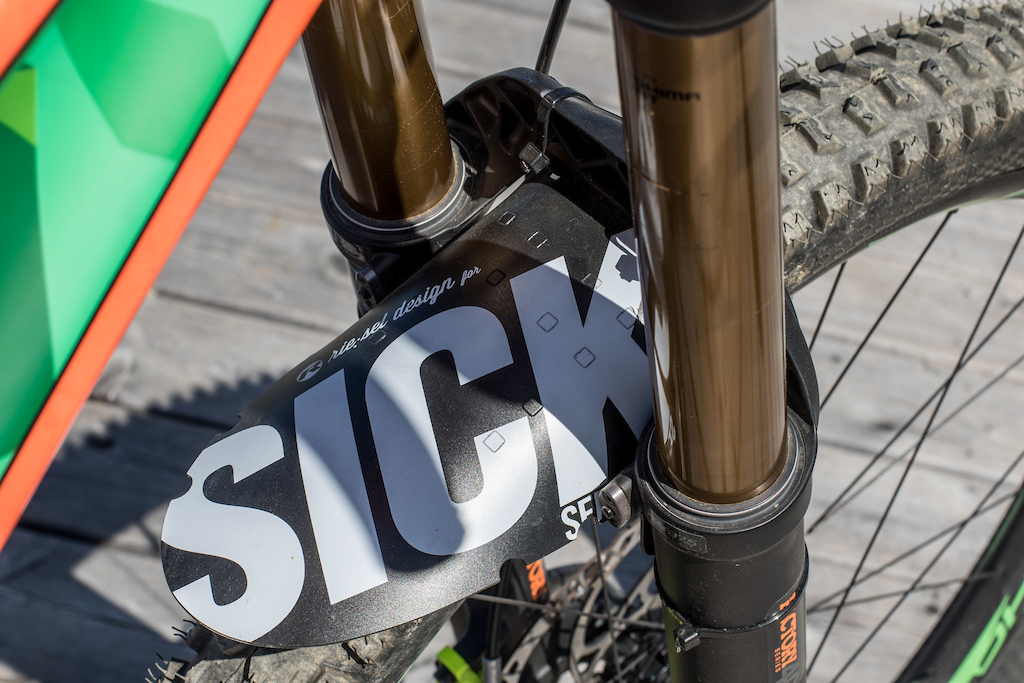 Yup, pretty sick. Some glitter here, lots of orange there, and running the compression setting on the Fox 40 almost at its max. Four to five volume spacers for a high progression in the fork make sure that Fabio doesn't bottom out on the big stuff. For jumps he's running 85 to 90 psi, for racing 70 to 75 psi. 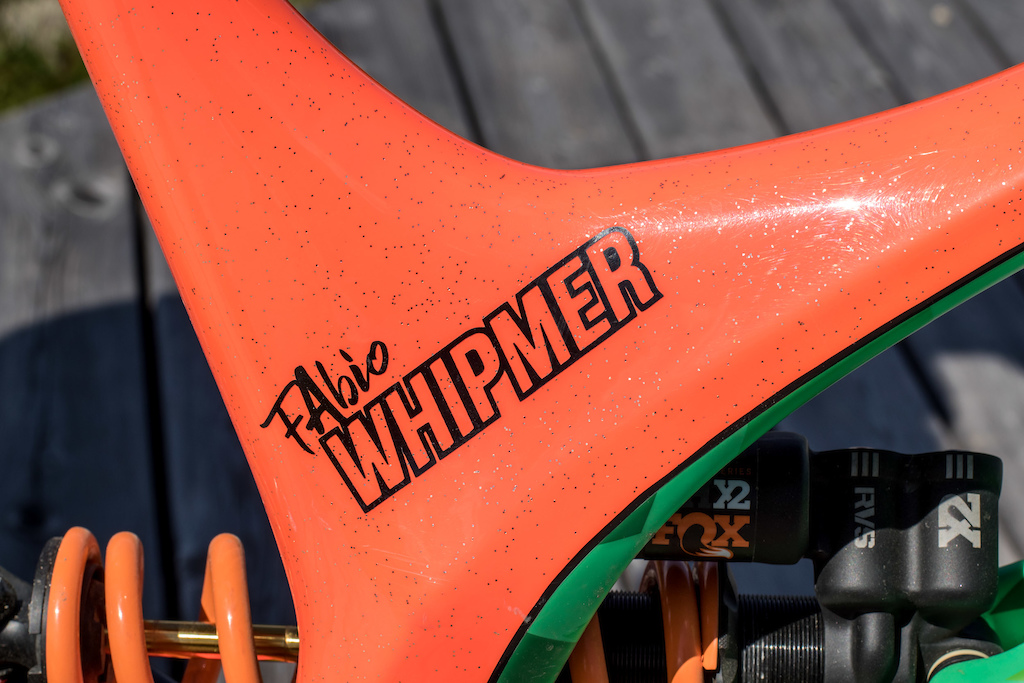 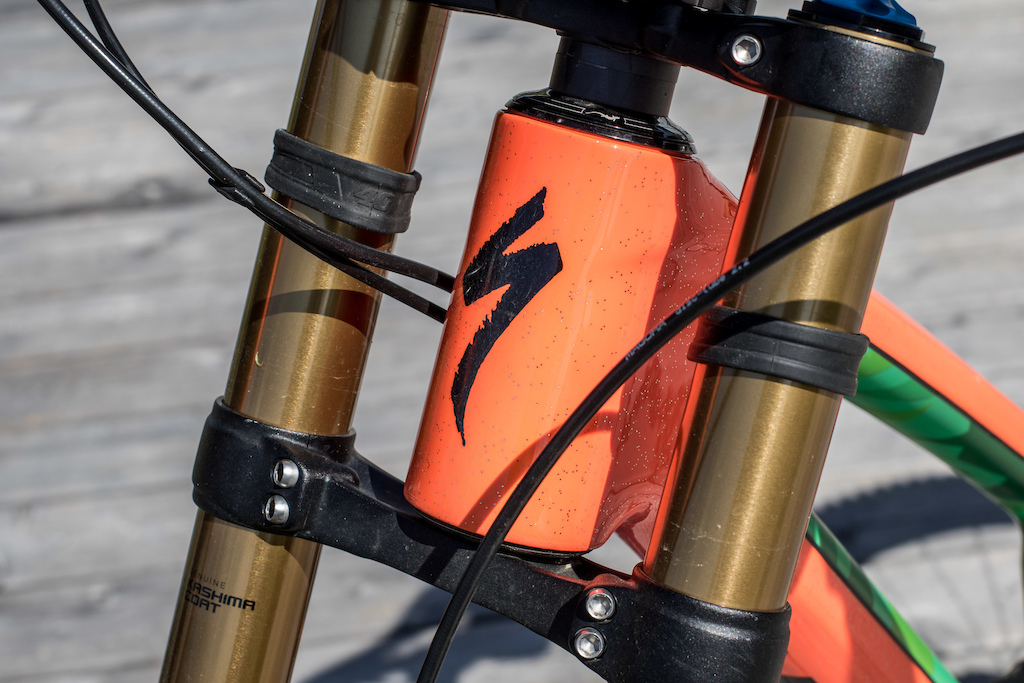 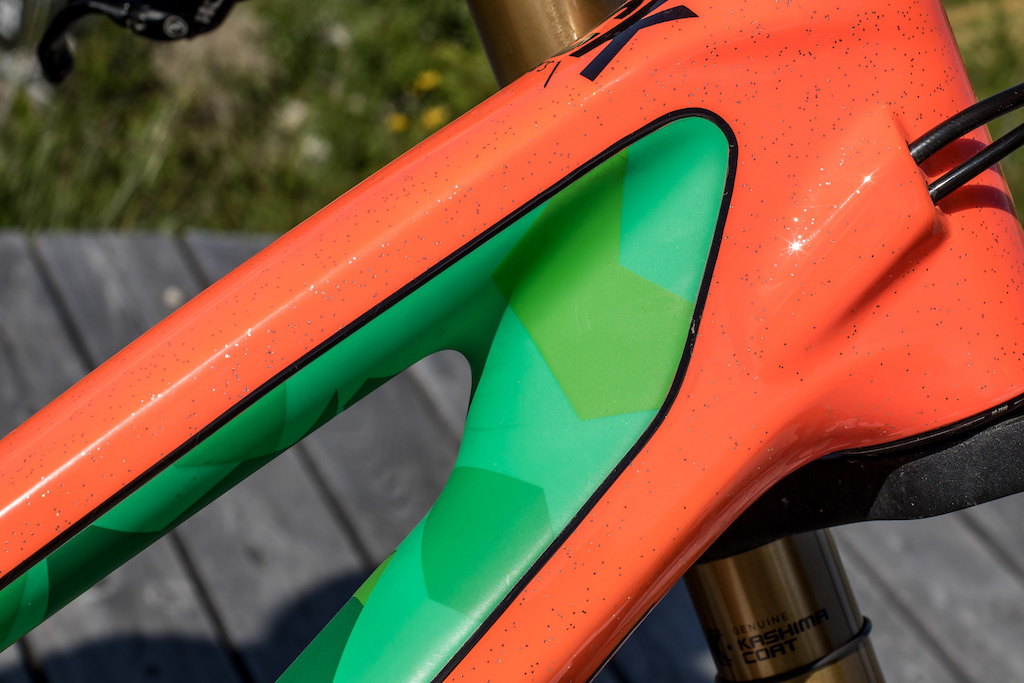 A camo paint job that anyone can dig. 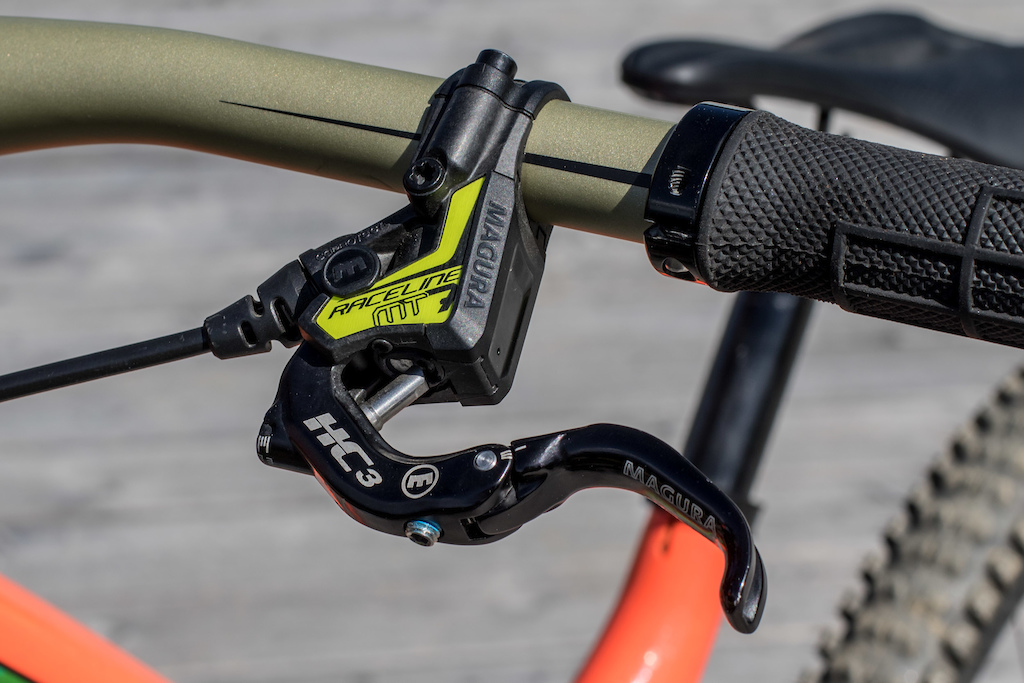 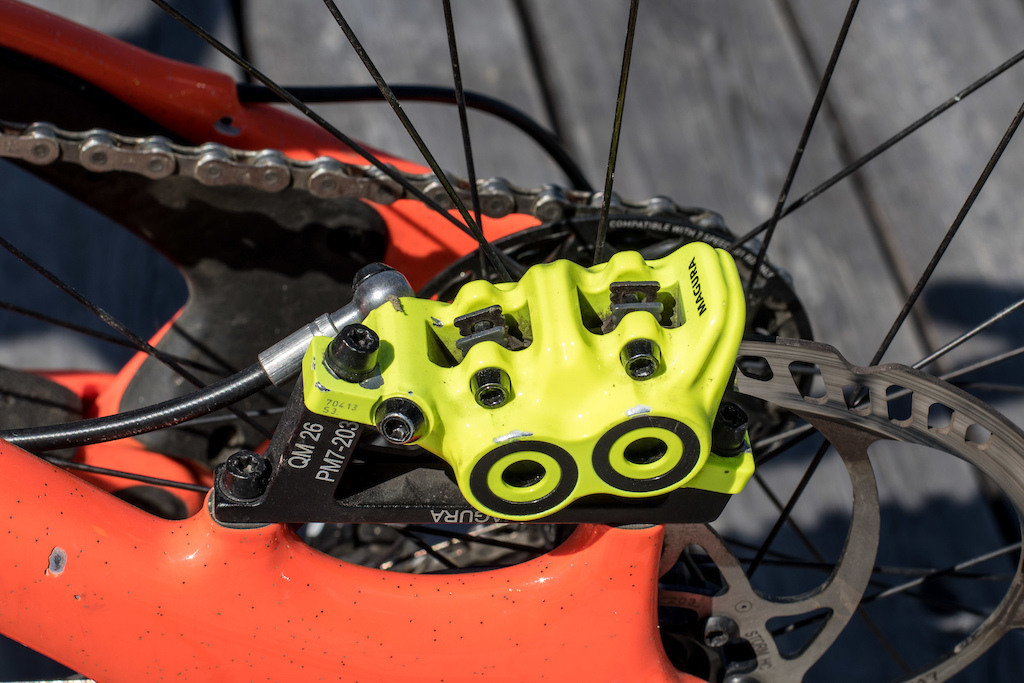 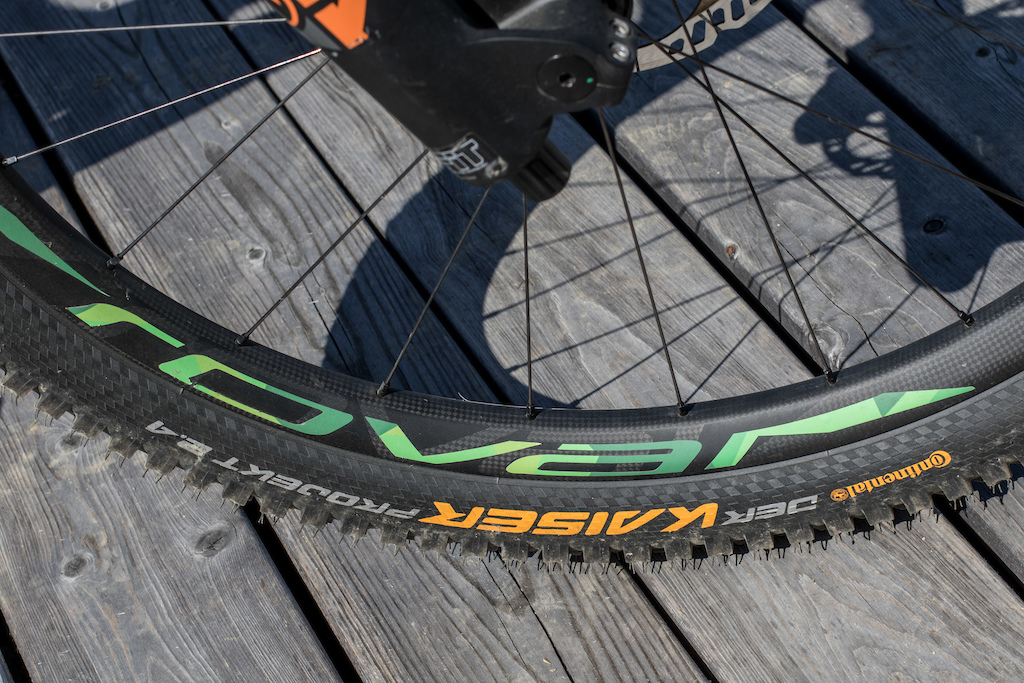 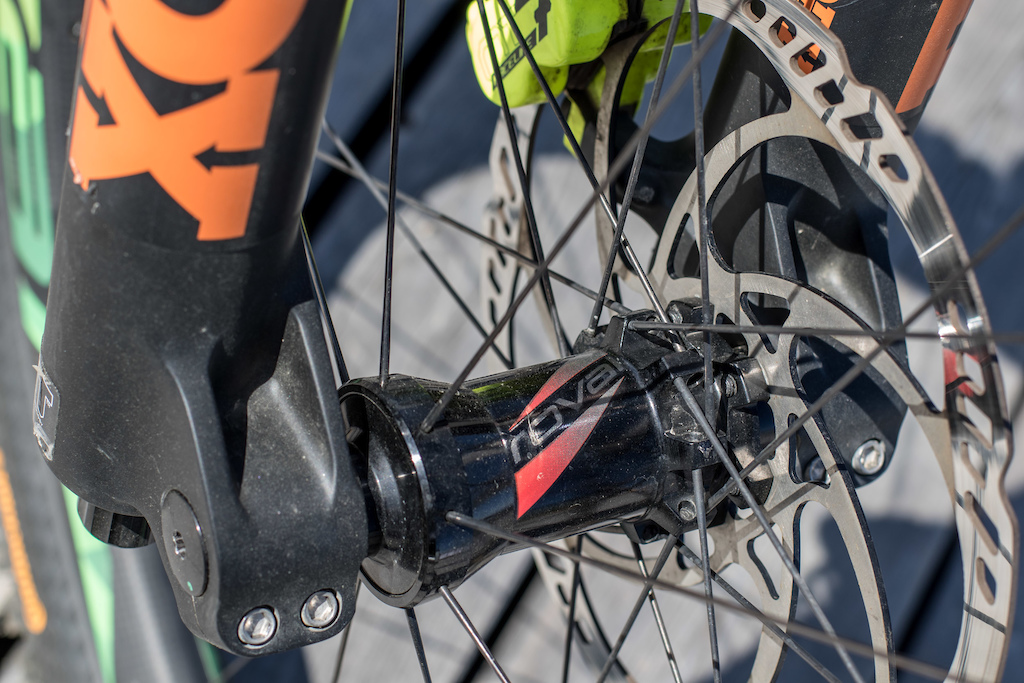 Roval's carbon wheels in 27.5" size keep the overall weight low with only 24 spokes in the front and 28 in the rear, but they survived all the abuse shown in Fabiolous Escape 2 and everything since. Air pressure in Conti's Der Kaiser tires is set to 1.7 to 1.8 bar front and rear. 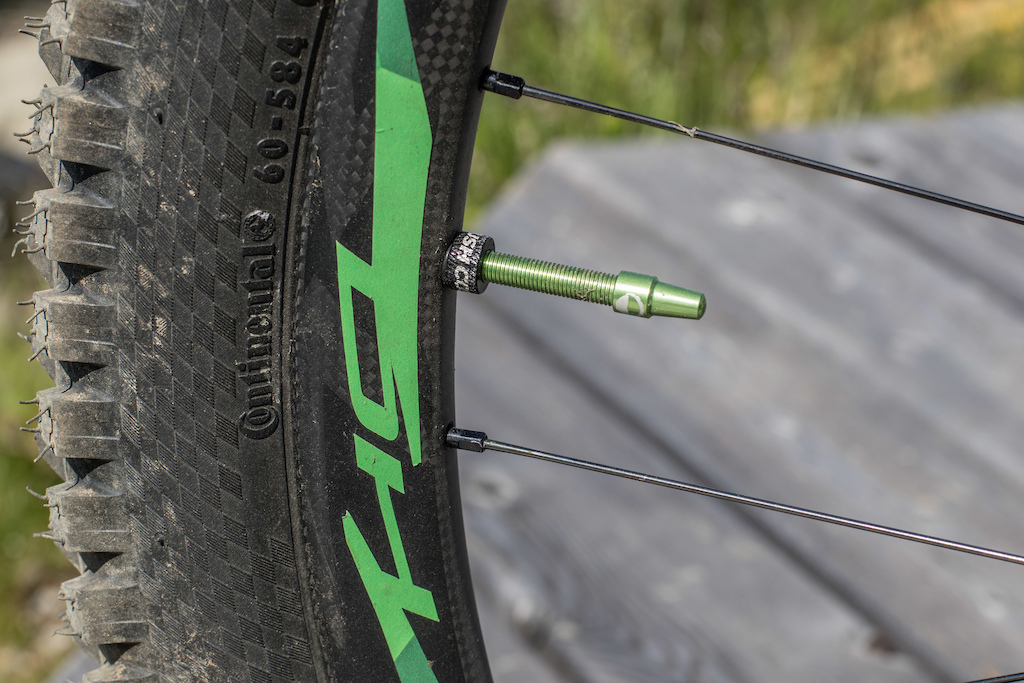 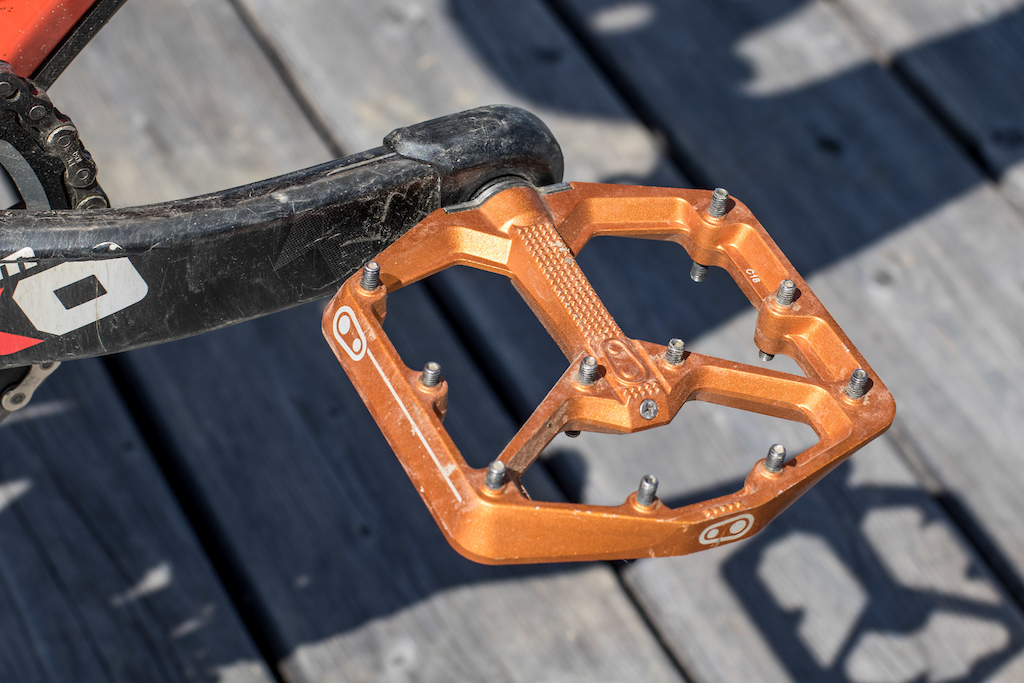 The green valve stem gives away CushCore tire inserts for flat prevention, shock absorption and secure seating of the tires. His feet are finding grip on Crankbrothers Stamp 11 Large pedals with pins extended out of the pedals as much as possible. 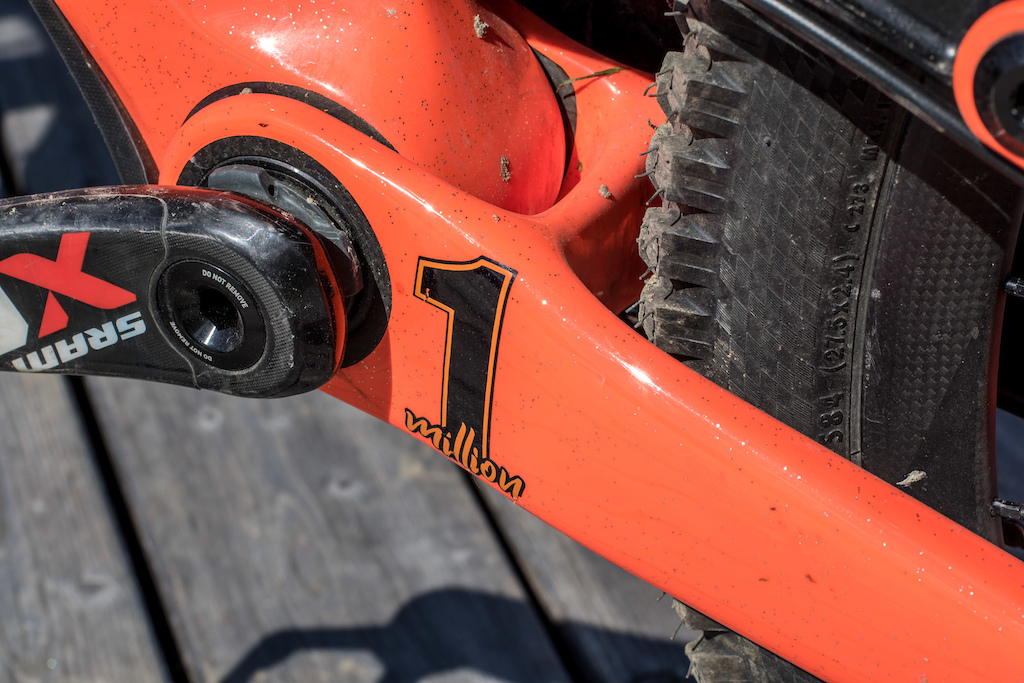 It's going to be time for a new decal soon - Fabio Wibmer is already up to 1.2 million YouTube channel subscribers. 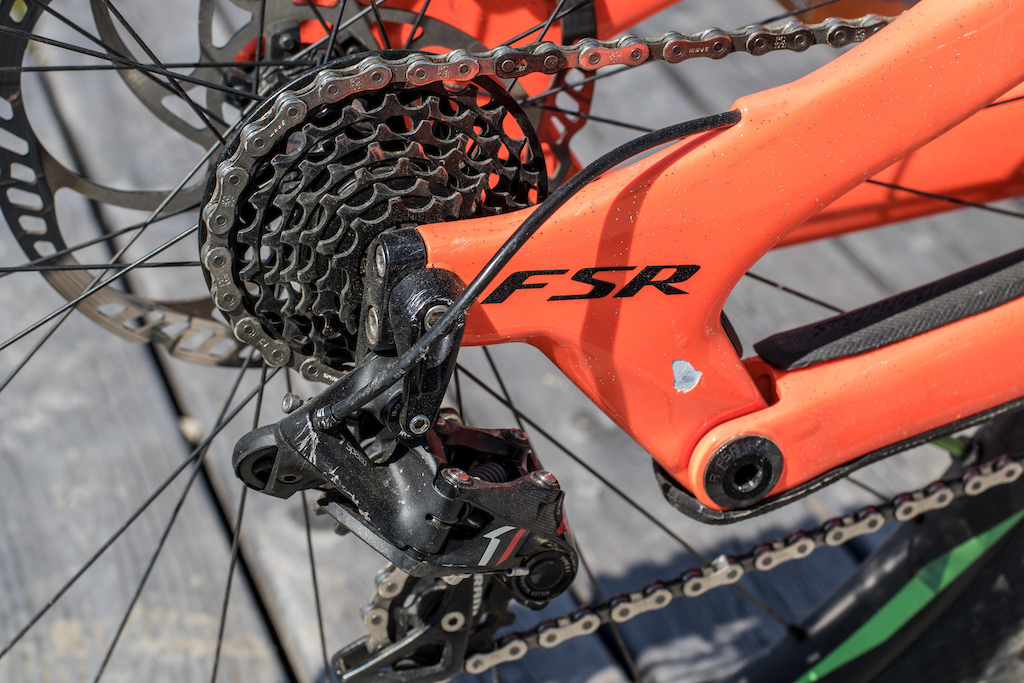 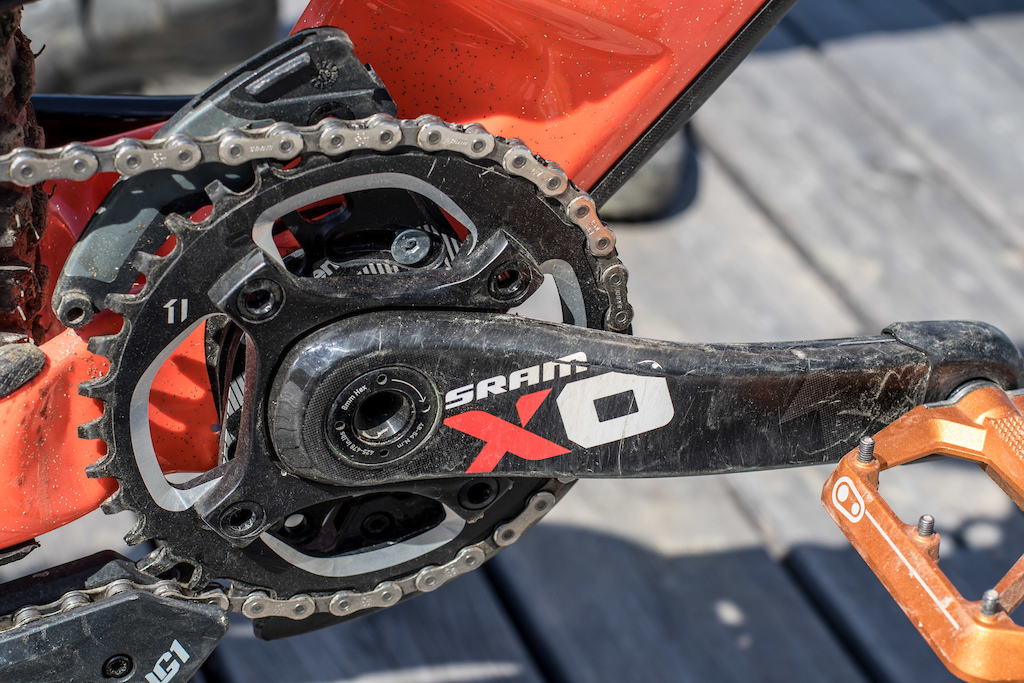 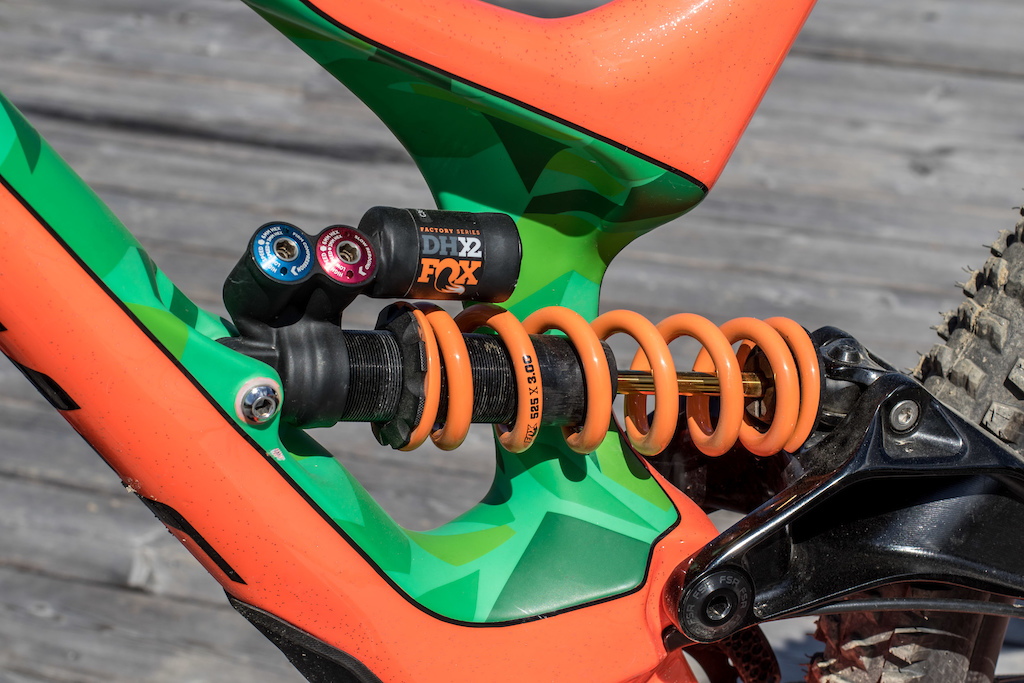 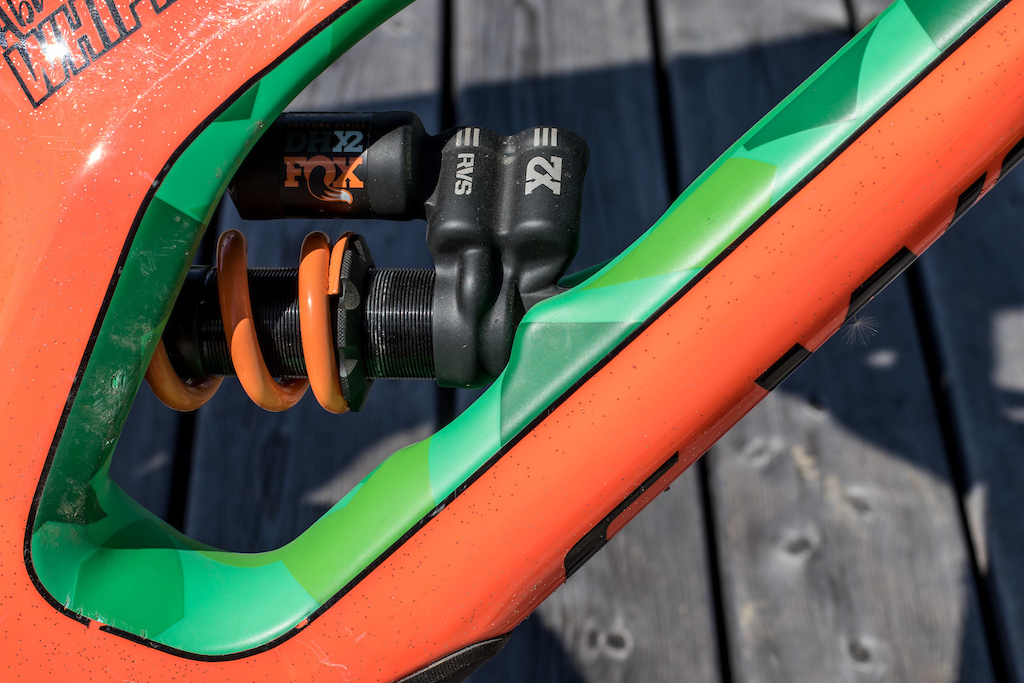 mollow (Jun 18, 2018 at 11:16) (Below Threshold)
@allballz: I want to believe in global warming, but one detail doesn't sit well with me. You guys always list records that we broke that were 100 y/o, but if it was that hot back then, why? And wouldnt that mean that climate changes in cycles? Or is it uust because we've only been recording temperatures since 109 years?

cunning-linguist (Jun 18, 2018 at 13:41)
@cmcrawfo: yeah, but if we recorded during the start of an ice age, records would be broken left right and centre, the same when coming out of one. Things change. We can’t do F all about it in the grand scheme of things. I do love to recycle and be as good as possible as every little helps, but I’m not naive enough for a moment to think that it’ll change course if we all give up meat, or driving fast cars.

cmcrawfo (Jun 18, 2018 at 13:48)
@cunning-linguist: it doesn't even matter... everyone downvotes even the most reasonable response this kind of thing... I get it, it's a bike website, it's off topic, no one really gives a f*ck. Bunch of nialists.

Yeah, one of those things. I suppose my MO is to care about it and do all that I can, but don’t let it ruin your time on the earth. :-)

mollow (Jun 19, 2018 at 7:50)
@headshot: just because a small region of the world doesn't feel it doesn't mean it's not happening everywhere else.


Also, cry me a f*cking river about your downvotes lmao, insecure much?

alerion (Jun 18, 2018 at 1:05)
how typical for e*thirteen LG1 chain guide. Half is missing. have the same on my bike and had to replace the clip with the screw. Shame on you e*thirteen.

They will be more than willing to send a new one for free.

pogan (Jun 18, 2018 at 6:44) (Below Threshold)
Im pissed off about mine, I had a crash during my DH race run 2 weeks back and it did not do anything to help with keeping my chain on, i have the LG1plus, and my chain came straight off the front chainring. I was in the top 10 fastest on the first split, and then i crashed and i had to go chainless the rest of the run, but I was top 15 fastest on the third and last split

K1maxX (Jun 18, 2018 at 7:00)
i guess, if NW chainrings would not have been invented, there would be more microplastic on trails than on beaches in around a decade because of those "chain-guides".

BoiseID5point5 (Jun 18, 2018 at 7:41)
Mine did the same just riding down Dirt Merchant. No wreck. Guys in the shop said it's common on these due to soft plastic or something. They said they run a zip tie over the top where it latches as a fix. So far so good on the new one...

ethirteen (Jun 18, 2018 at 7:52)
Hey @alerion ! Check your inbox, we want to follow up with you regarding this. Our customer service team would love to help you out and get your sorted. Thanks!

This is why I love your products! Outstanding svc.
Hubs, chainguide, wheelset, cranks and my fave valve stems... Love them all. They’ve served me very well thus far. No issues at all.
Thx e*thirteen!

Kramz (Jun 18, 2018 at 0:58)
It's funny you should say that, because I have a commuter bike, and a mountain bike; and I literally just choose the mountain bike because it's more fun. Additionally the commuter bike is fragile.

mnorris122 (Jun 18, 2018 at 2:07)
@Kramz getchu a cheap shitty steel singlespeed for commuting, any cheap hi-ten frame should be durable as f*ck, and the components tend to be too. Road tires will be way faster than mountain ones (duh) and you'll save the wear on your mtb, and riding singlespeed everywhere will make you stronger.

optimumnotmaximum (Jun 18, 2018 at 2:24)
@mnorris122: i built a commuter and never use it. I have two not very frequented stairgaps on my way to work and if i deviate by 3 km on my back way home i am at the start of a singletrack network.

ChazzMichaelMichaels (Jun 19, 2018 at 3:02)
Just can't get past the brake cable routing. LH front brake makes it look so awkward. I wonder how far from a new Demo we are with that prototype breaking cover recently?

karl-huckingbikes (Jun 18, 2018 at 7:28)
Glitter orange and camo green sick paint job there more ideas for my own bike when she gets a paint job lol

cmcrawfo (Jun 19, 2018 at 8:25)
@raddog: you can't ignore one thing the company reports about their product whilst embracing another point as being the products sole purpose

optimumnotmaximum (Jun 18, 2018 at 2:11)
if i had to pick one company to avoid in my "first lawsuit" it would be the big S -they have money and experience, often a winning combo.