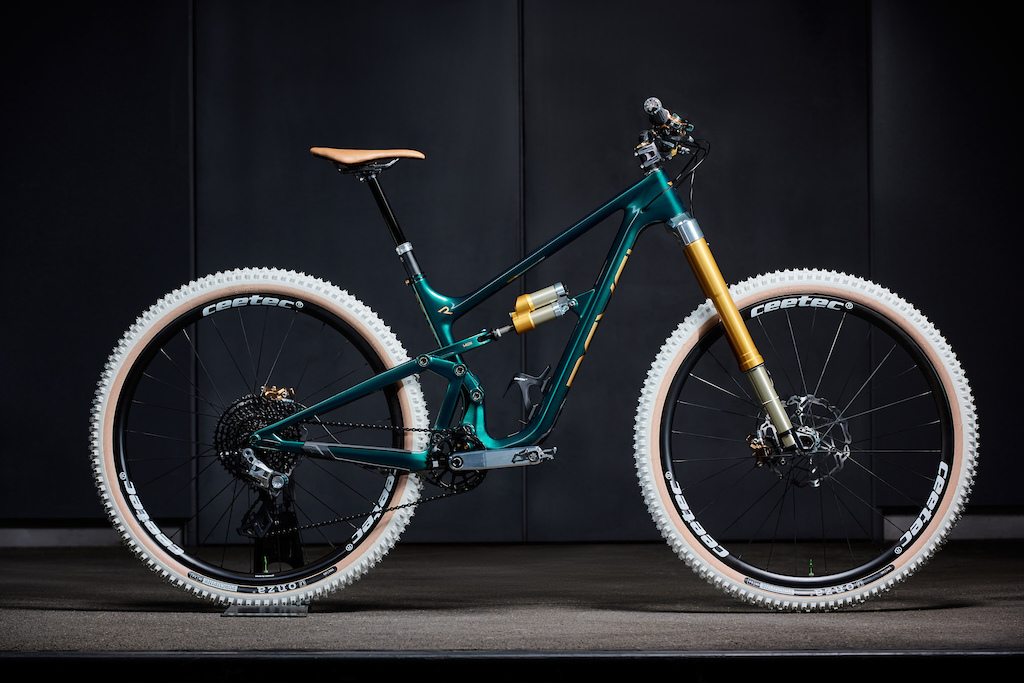 Originally made to show off at Sea Otter, this one-off Revel Rascal is built with a handful of special parts that you may not have seen before.

The build was inspired by one of the first custom bikes Marc Wohler, who works for the German distributor Flowrider Racing, built in the early nineties, a deep forest green Klein Pulse. With Flowrider Racing becoming the distributor for Revel Bikes in Switzerland, they thought it was a perfect opportunity to make a homage to that Klein.

The original plan was to show the bike off at Sea Otter, but with that scrapped they have instead sent it through to us to display digitally before it gets too dirty. It's a bike dripping in prototype parts including a carbon DH bar from Ceetec alongside a custom 'Vegan' saddle, brakes from Braking and drivetrain components from Ingrid. Finally, the incredible paint job is from Stefan Utz at Cycleworks using original Klein colors. Let's take a look at some parts of the bike in detail: 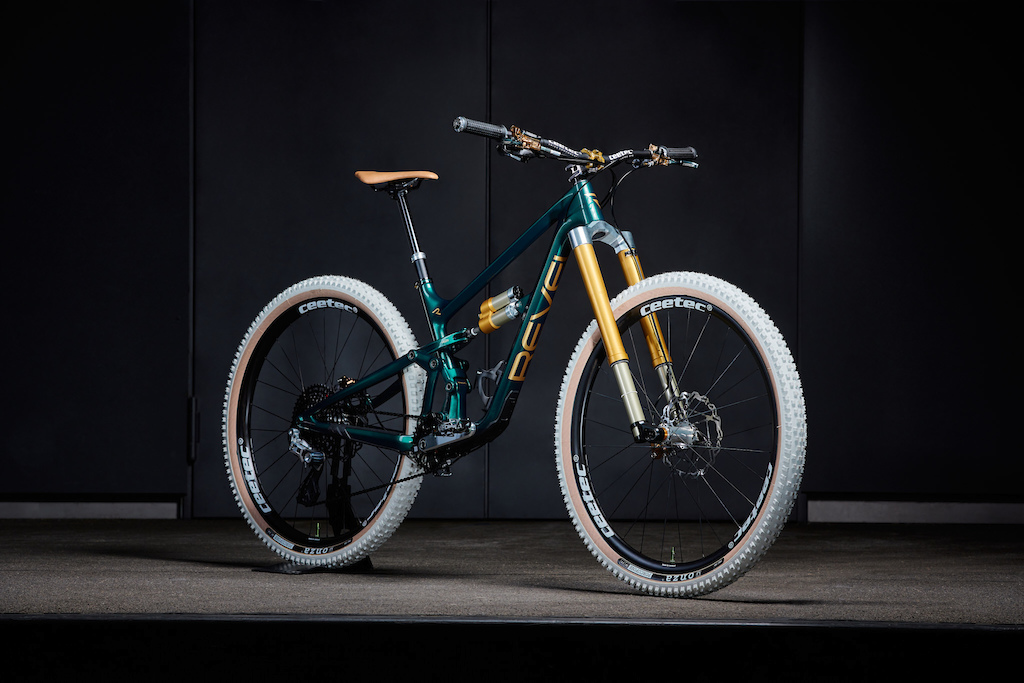 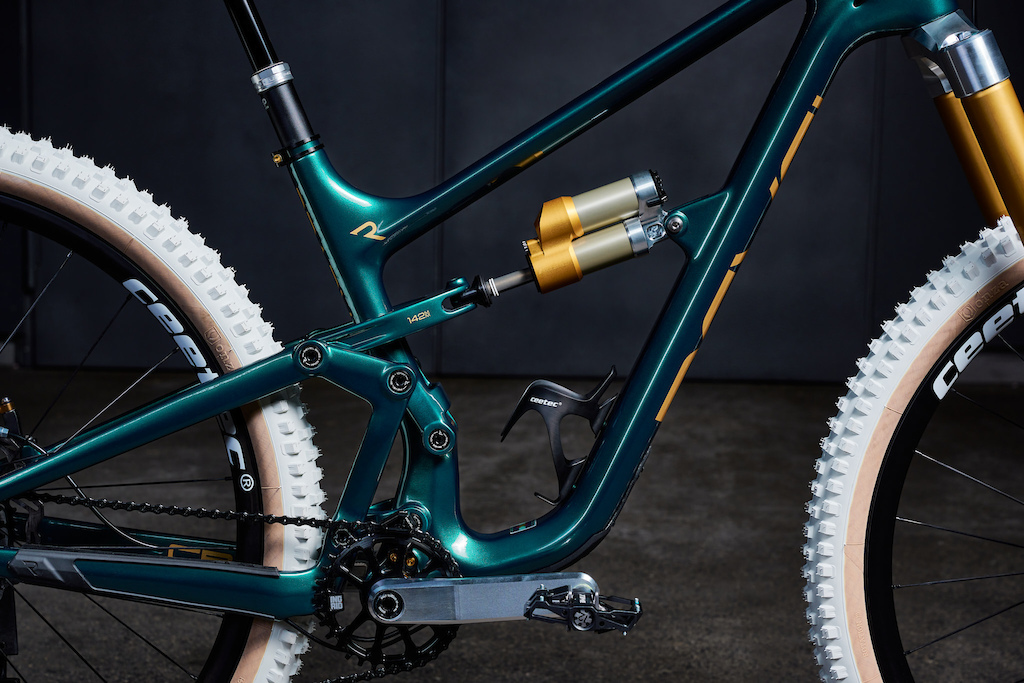 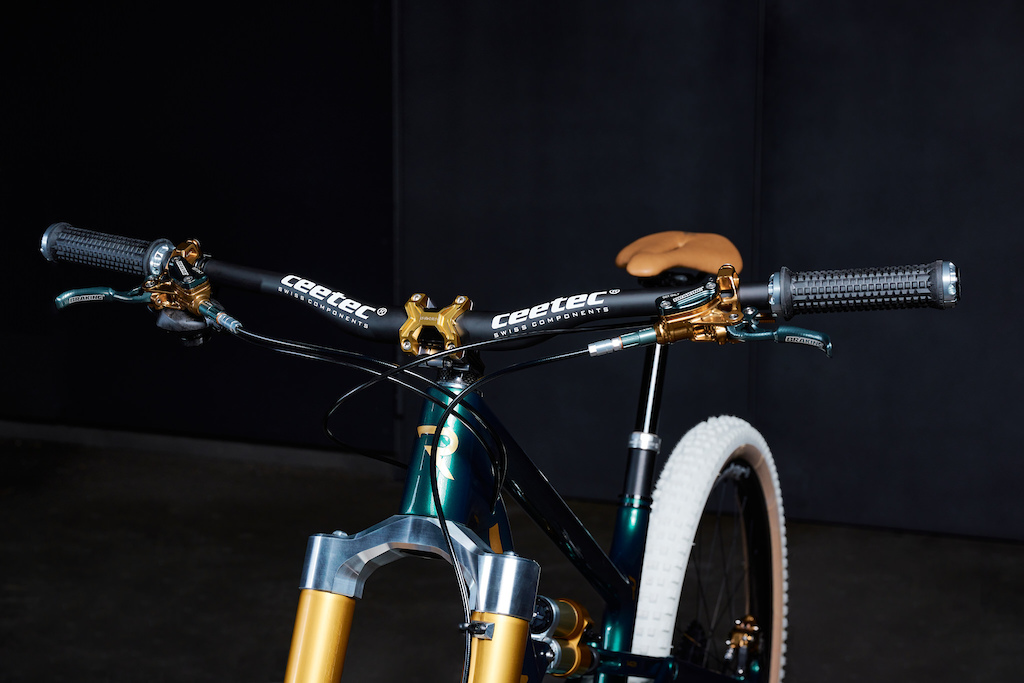 First up is the drivetrain which comes courtesy of Italian brand Ingrid Components. For this custom bike, they have fitted a new prototype 12-speed derailleur, made using two different construction methods.

CNC machining aluminum is used for most of the derailleur body and links, but they use additive manufacturing for the other components such as the cage and pulleys. Using these two techniques, Ingrid are able to keep costs low so they can easily adapt or modify each component while also making it possible to replace each element.

Although the bike is using a SRAM XX1 Eagle shifter, Ingrid says they currently have their own design in the works. Currently, they are targeting a weight of 265 grams for the rear derailleur putting it just 1 gram off XX1. Also from Ingrid are the cassette, cranks and chainring. 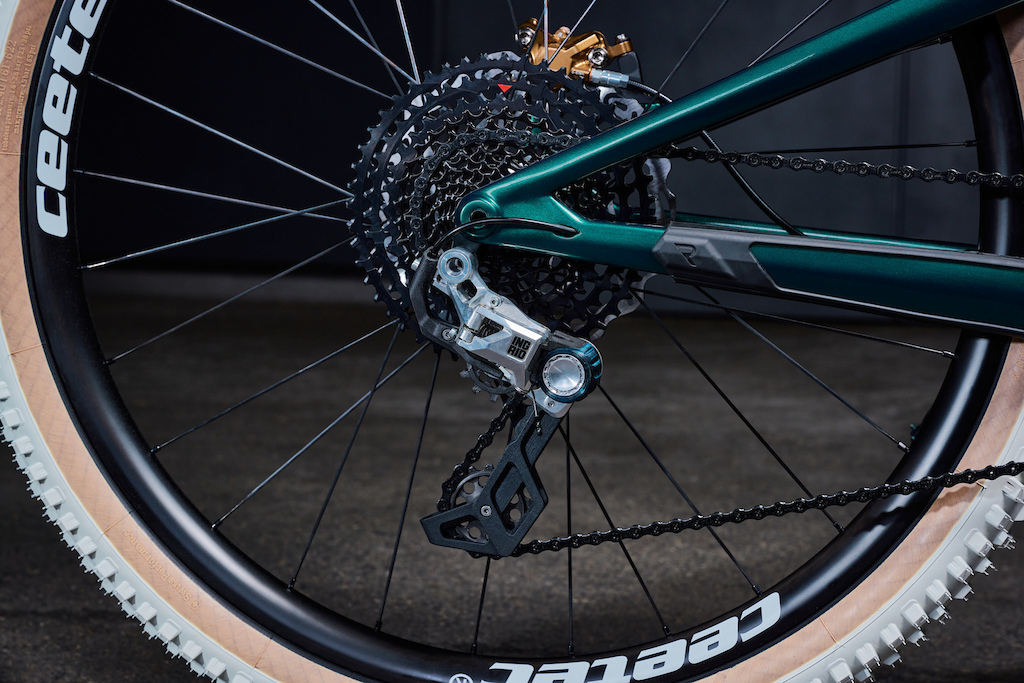 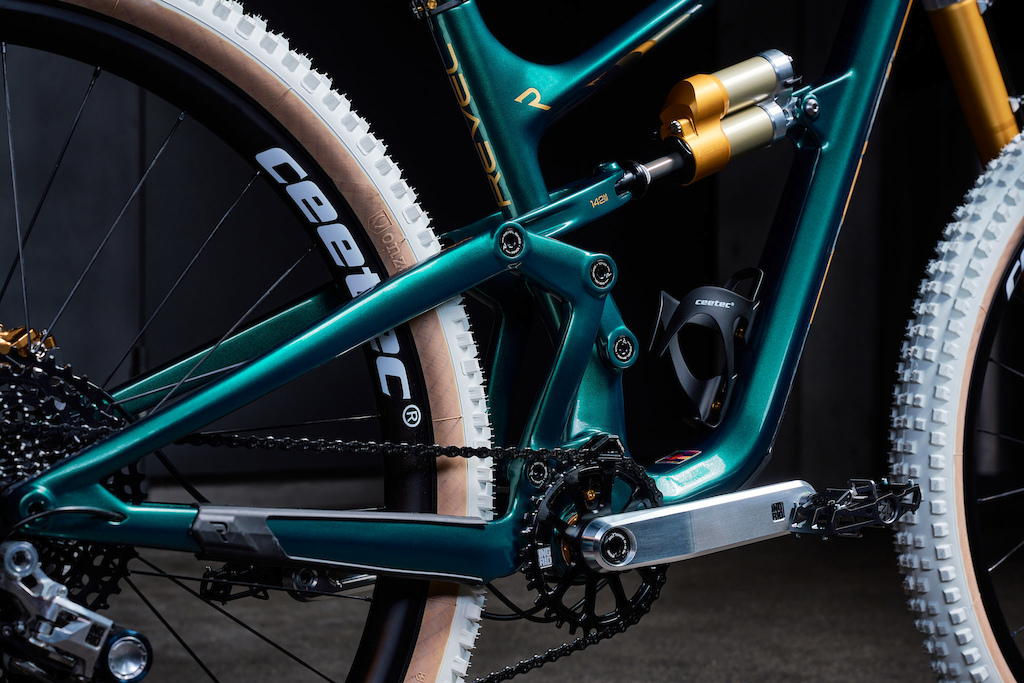 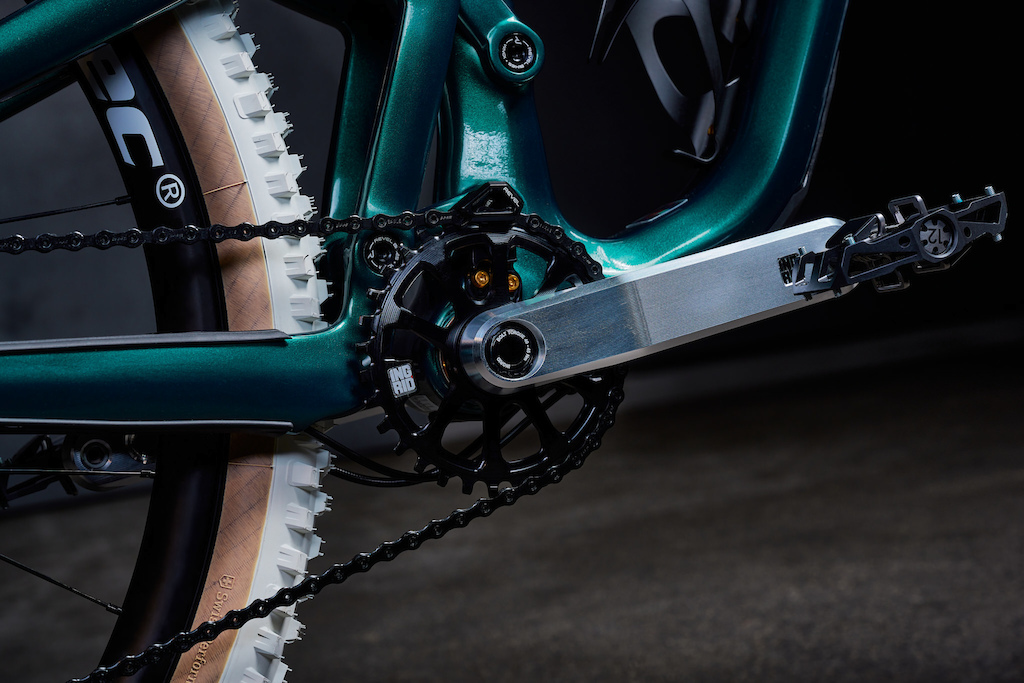 Fulfilling suspension duties is a full setup from German brand Intend. Out back they have fitted the Hover Shock which aims to feel like a coil shock and definitely helps add to this Revel's very unique appearance.

For the front suspension, they have used the Edge New Age Fork featuring new cable guides, bushings and axle when compared to the Edge fork. This includes changes such as SKF seals for wiper and oil seals, higher bushings and the Royal-Flush coating. Find out more about the New Age range here. 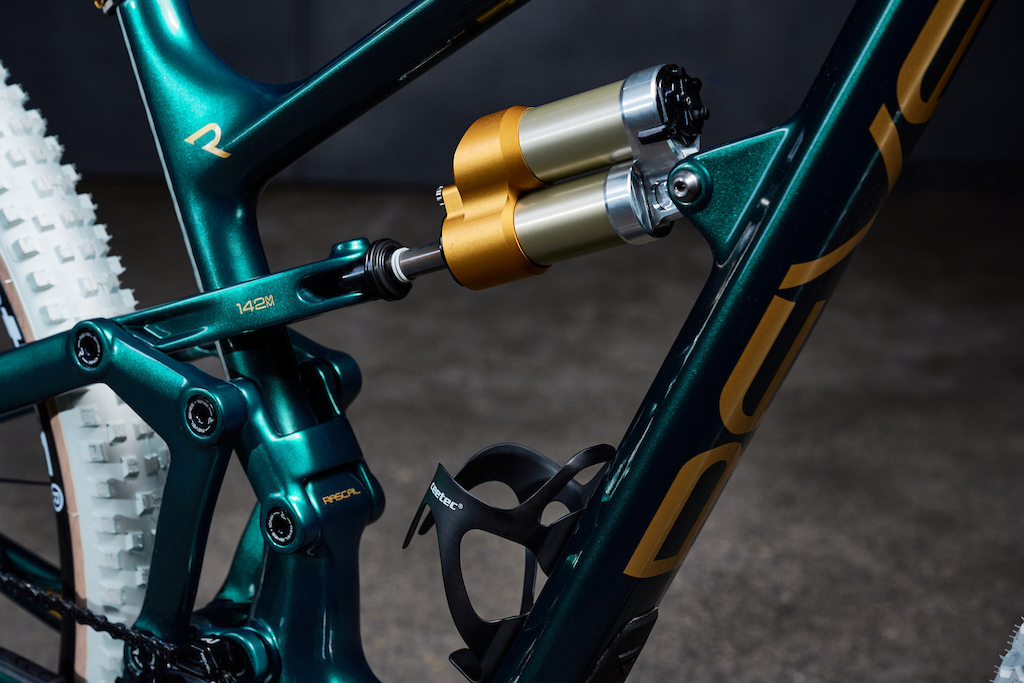 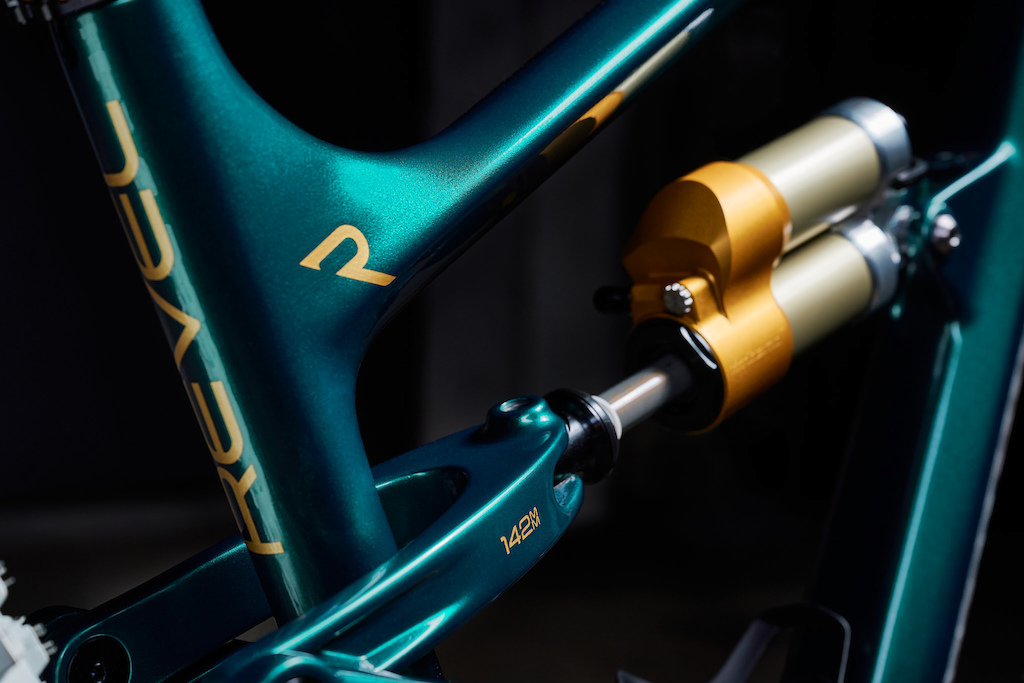 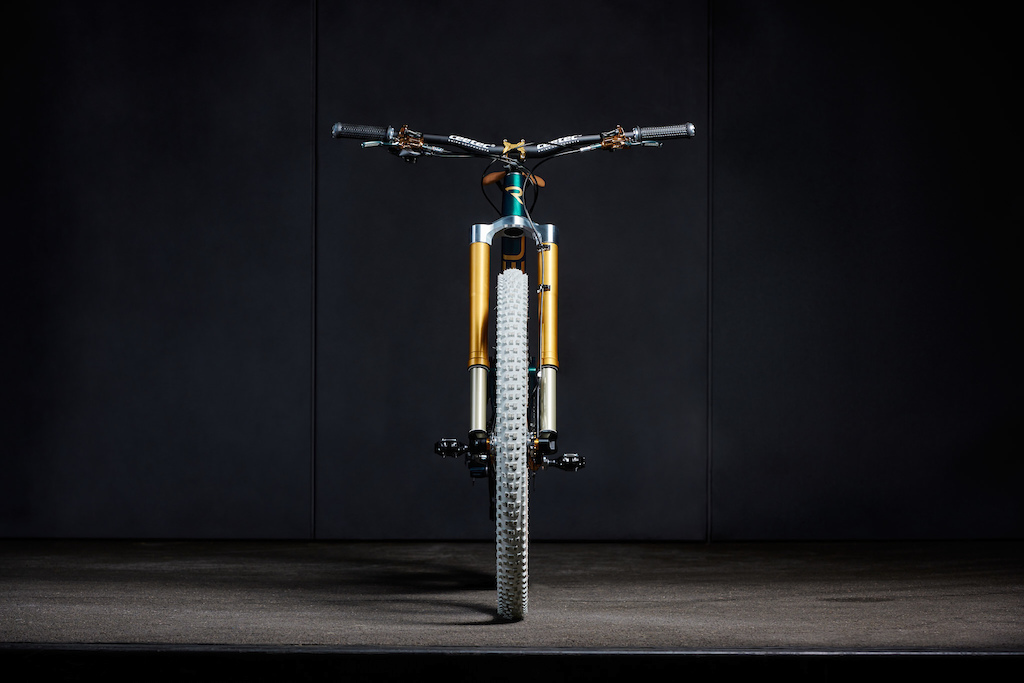 Another prototype component on this build is the brakes from Braking. The company was originally established in 1990 selling motorcycle brakes but in 2018 they branched out in bicycle brakes and the Revel features a new prototype of the 'Braking Complete System'.

The new brakes save over 100 grams over the old version while increasing braking power. The brakes are also completely CNC machined and feature a new thickness of steel braided hose for a slight weight saving. In addition to this, the brake pads have been adjusted for a wider braking surface allowing for better grip and heat dissipation. 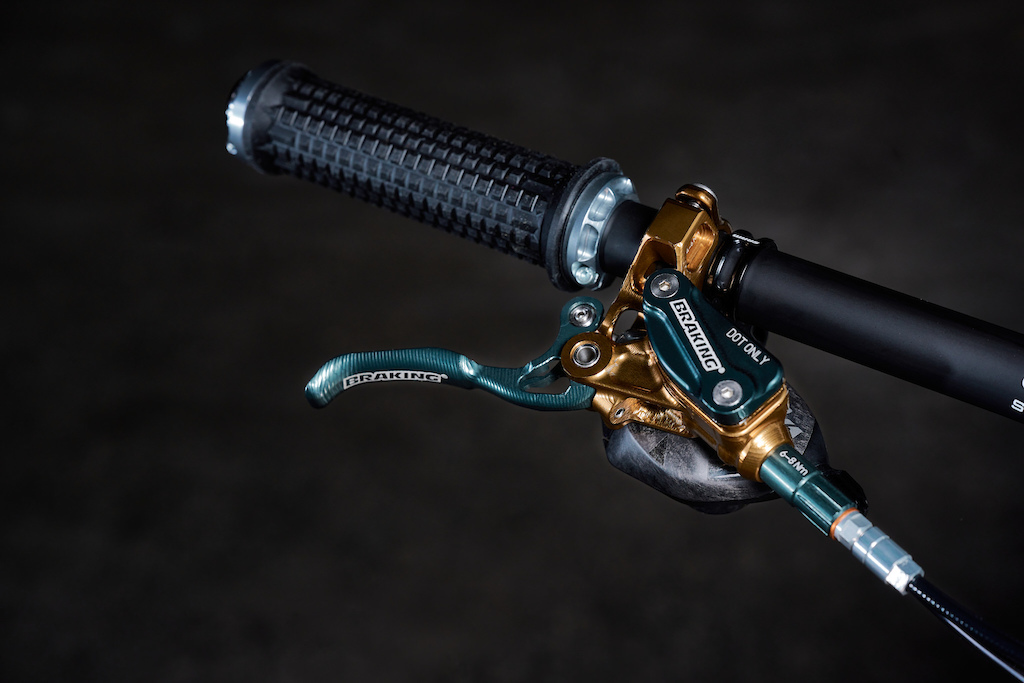 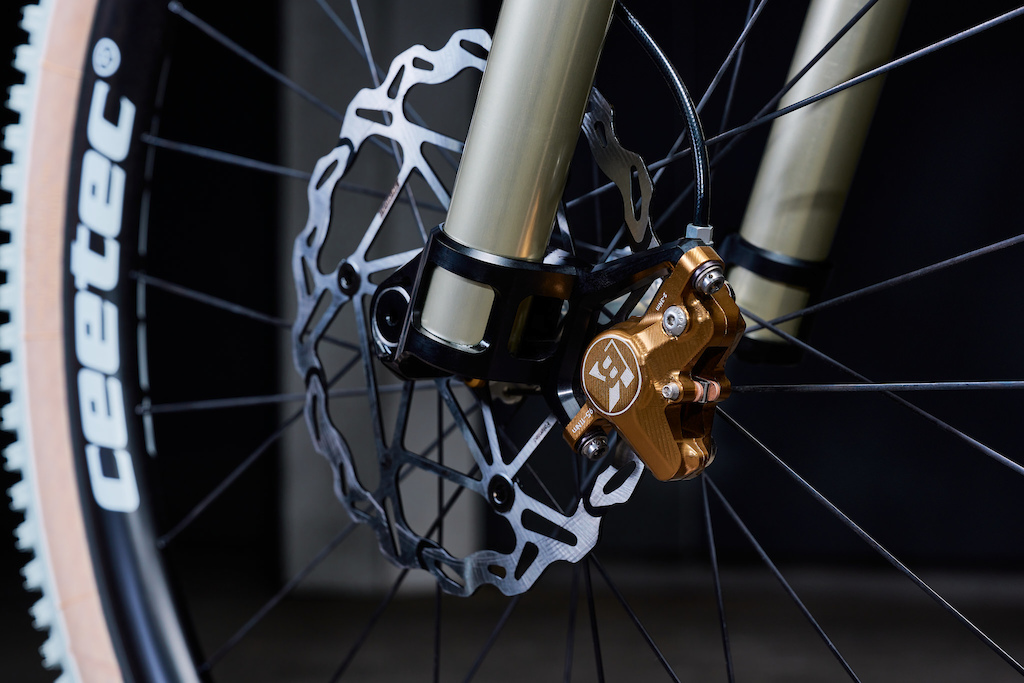 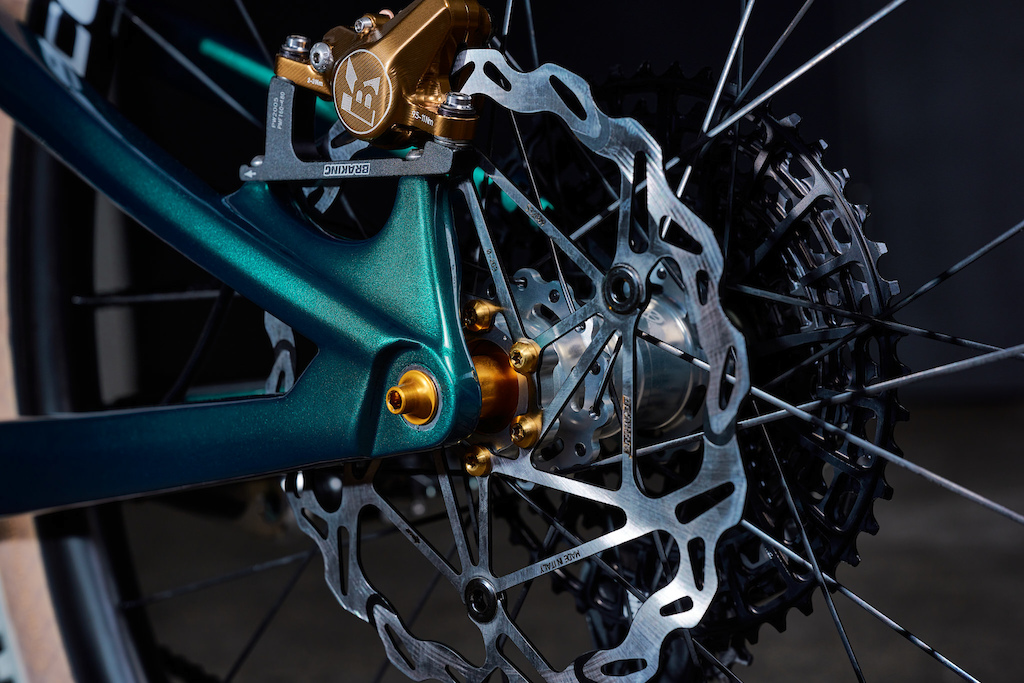 Completing the bike is a whole load of finishing kit from the Swiss brand Ceetec, this includes wheels, rear axle, seatclamp and bottle cage.

Most notably the bike features a prototype DH Carbon bar. It has been developed between Flowrider Racing and Ceetec since the summer of 2019. This version was built to the dimensions provided by Marc Wohler (800mm width, 25mm rise, 7-degree backsweep). The bar has a carbon UD finish and weighs 209g.

Also for this bike, they have made a special 'Vegan' version of their C1 saddle as Marc Wohler says: "because we are vegetarians and we don‘t want to kill animals for our saddles." The saddle also features a custom made thermo memory foam inside to improve its levels of comfort for the rider. 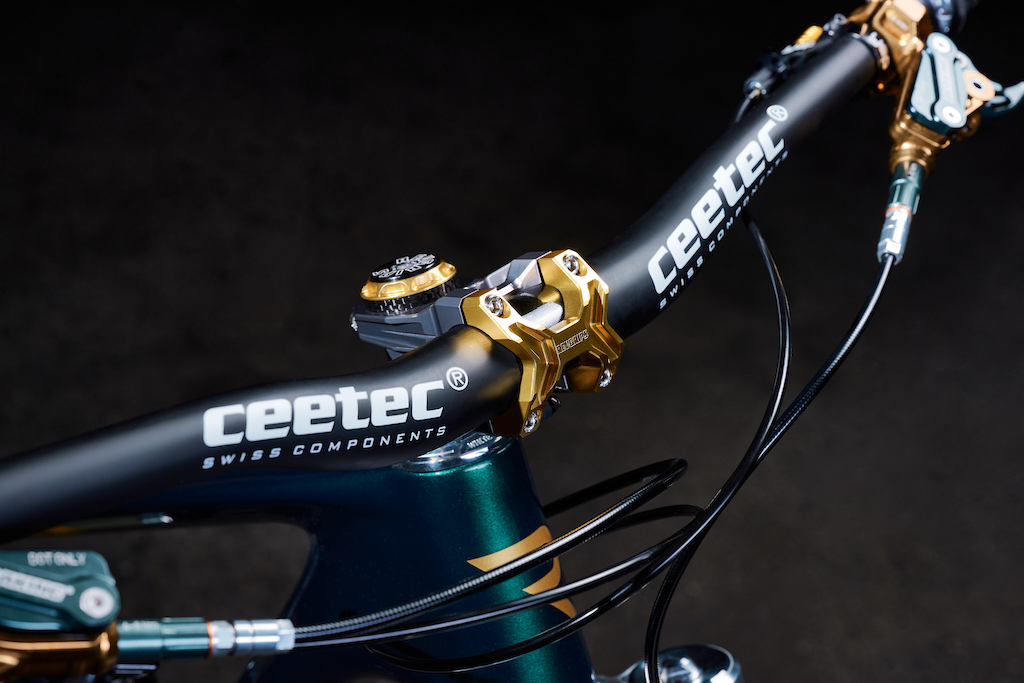 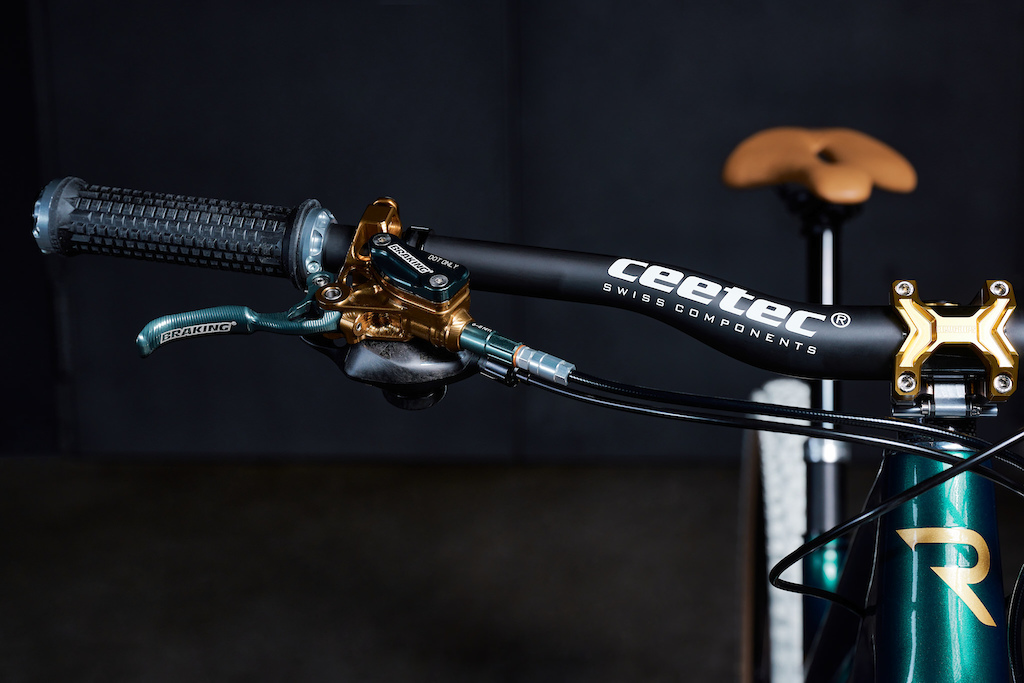 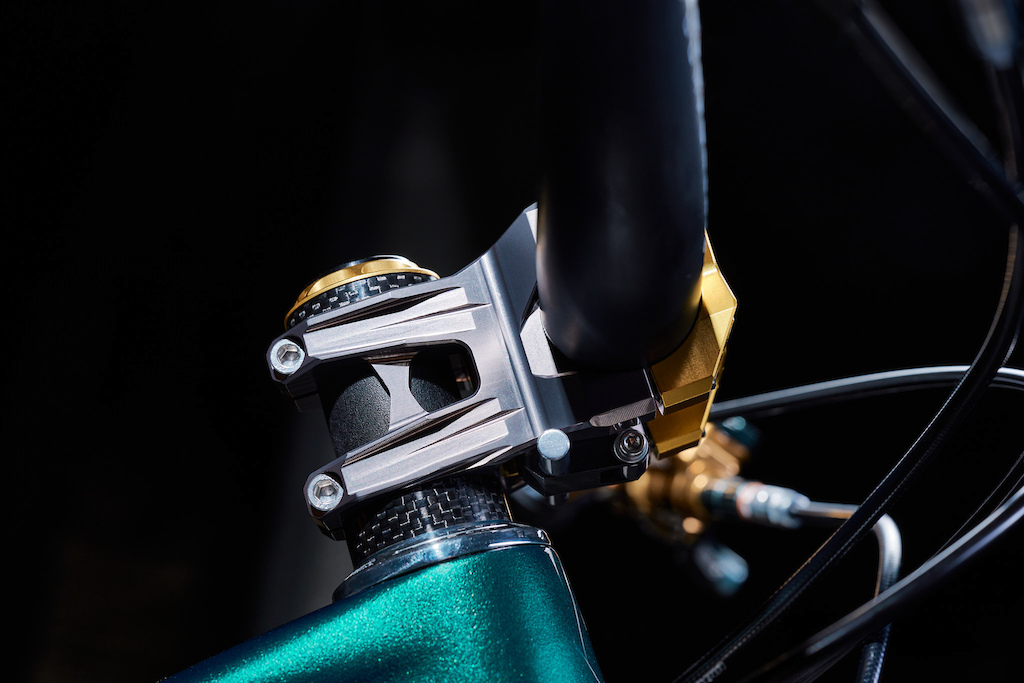 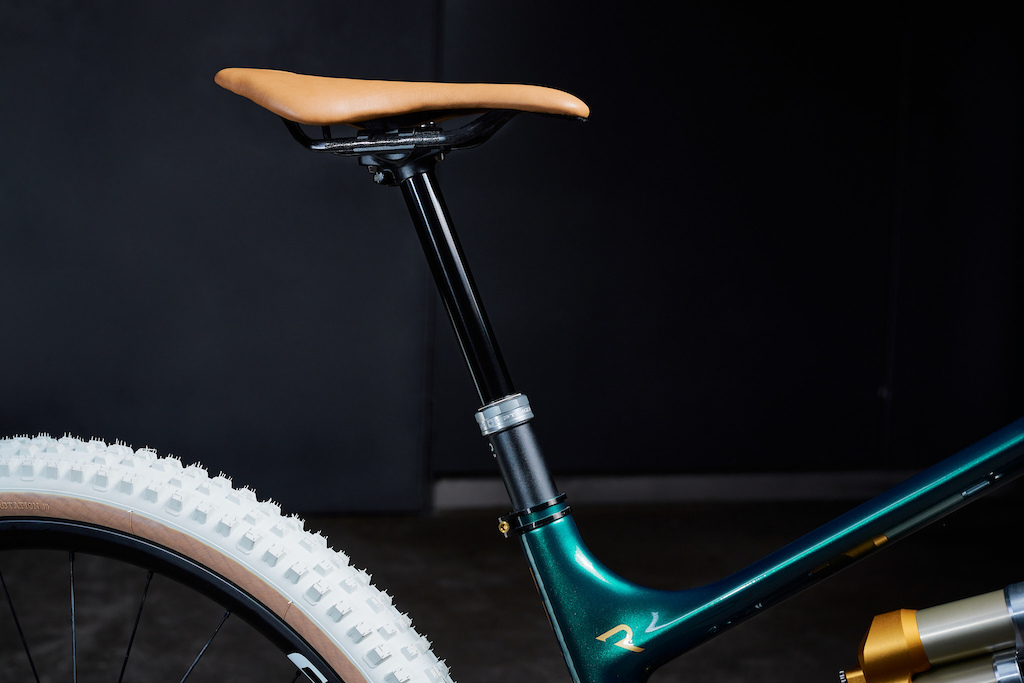 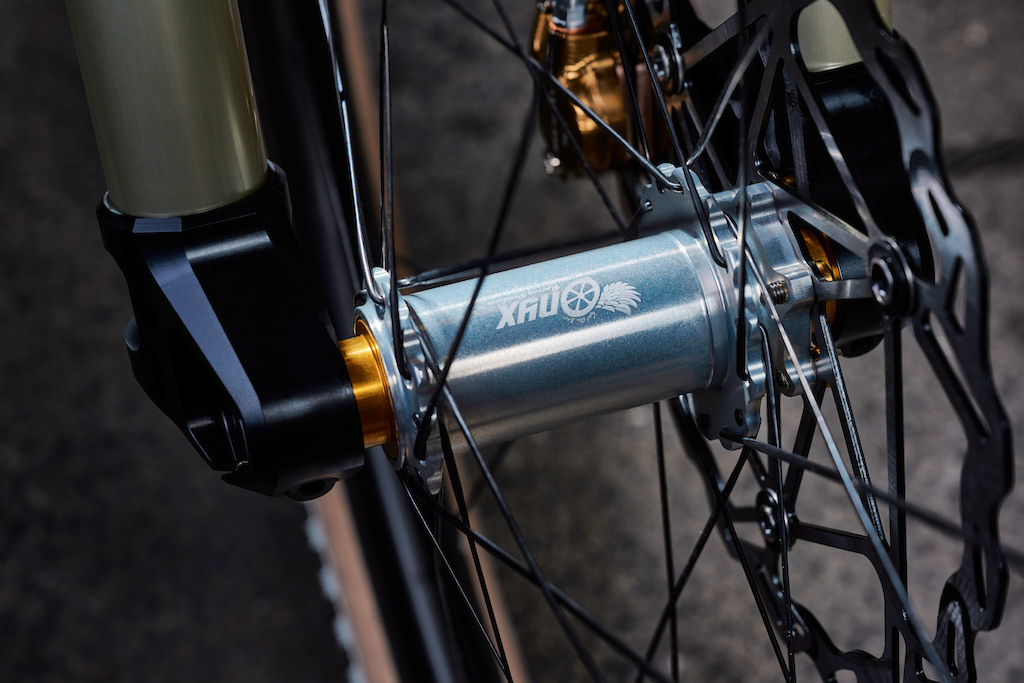 Tweet
Must Read This Week
Interview: Trek's Travis Brown On Experimenting With 32" & 36" Wheels
85887 views
First Ride: Cannondale's All-New Scalpel SE
72359 views
Ridden & Rated: 4 of the Best eMTB Motor Systems for 2020 - Bosch vs Brose vs Shimano vs Fazua
61836 views
Pinkbike Poll: If You Had to Ride One Bike for the Rest of Your Life, What Would It Be?
53426 views
Video: Conflict Arises Between 17 Year Old UK Rider & Apparent "Trail Saboteurs"
52236 views
First Look: ShockTune is a Free Suspension Setup App
46525 views
Video: Claudio Caluori Tries to Keep up With Nino Schurter on his Home Trails
45447 views
Bike Check: Ben Cathro's Santa Cruz V10
35570 views

artistformlyknowasdan (May 15, 2020 at 6:39)
@sngltrkmnd: worst mistake ever - white shorts, one ride through in the wet and now it's perma mud butt with those

tacklingdummy (May 15, 2020 at 8:13)
Some goes for any white clothing. I buy darker clothing, so you can throw everything into the washer together. No separating. Lol.

Hogfly (May 15, 2020 at 9:46)
@sngltrkmnd: We went to Utah over Winter Holiday this year. My son went into the bike shop with his mom to buy some gloves... came out with white TLD gloves. Nice shade of orange by the end of Day 1.

Extremely tacky, amazing grip. And once dirty made the skulls look awesome in a rat rod kinda way.

Mr-Horse (May 15, 2020 at 12:43)
....now we just need a Biking brand bike for those Braking brakes. Would not be surprised if Specialized hasn't already trade marked the words Bike, Biking, Bicycle, etc.

donpinpon29 (May 16, 2020 at 1:12)
@sunringlerider: white helmet, no undies will make you a finesse rider through rockgardens

twozerosix (May 15, 2020 at 6:06)
So happy to see outlandish builds like this. Reminds me of some of the irrational exuberance of the 1990's. What a sick show bike. Good enough to just put it in MBA magazine, tear out the pages and thumbtack to the wall.

ilovedust (May 15, 2020 at 7:54)
Vegan saddle!!??
Who even has a non-vegan saddle?
We all use vegan saddles. Its called PU or leatherette. Faux leather or what ever.
Sweet ride but less moral infliction please

edspratt Mod Plus (May 15, 2020 at 8:10)
You're right that most saddles would be vegan but Ceetec's normal C1 saddle uses Goat's leather.

CustardCountry (May 15, 2020 at 10:04)
My Brooks saddle on my cute/hack bike is made from leather (and older than half the people on PB!). But I think all my others are synthetic

JohanG (May 15, 2020 at 10:10)
I prefer to ride on the hides of the animals I have slain, then go home to the house I have driven my enemies from, to be served by the slaves I have conquered, and to dine while hearing the lamentation of their women. But to each his own.

To crush your frenemies,
To see them lagging behind you,
and to hear them lament like women

YanDoroshenko (May 15, 2020 at 5:56)
Braking brakes is genius. I'm actually quite surprised I was able to find their website.

mountaincross (May 15, 2020 at 7:36)
Can't beat the quality on those Braking brakes, but have you tried the Sitting saddle? Steering bars? Grippy grips? The whole component lineup is racer racy.

I'll send you royalties in the mail.

sethius (May 15, 2020 at 5:56)
Those braking system brakes were an absurd price. Would of taken a punt at mt7 or hope price, but @trickstuff prices no chance. Ingrids 2 tone cranks were stunning, good to see derailleur, was loving the fluro mockup years ago!

Merc3017 (May 15, 2020 at 12:09)
They are just a bit above half the price of a trickstuff. So around Hope, MT7, Hayes price. And believe me, they are much better and I totally recommend them. Proud Owner of a Braking Complete System.

timbrewolff (May 15, 2020 at 6:36)
It's the RevGrips stem, has an integrated bell revgrips.com/products/trail-bell-with-silencer-switch

Surely the ideal is a whistle that goes off every 50m or so, so you feel like you are racing dh?

takeiteasyridehard (May 15, 2020 at 8:05)
"We dont want to kill animals for our saddles".....but we want to make it still appear that we do - can you make that vinyl look like cowhide please?

JacobyDH (May 15, 2020 at 9:02)
Is it just me, or is the inverted fork underrated? While it seems like the sanctions would attract more dirt, since they’re farther from the tyres they won’t. Also, you have all the weight of the bike, and yourself, and the fork compressing down...

artistformlyknowasdan (May 15, 2020 at 11:20)
historically the problem has been the legs don't have an additional arch which results in excessive flex. DVO did address this to a degree. Hopefully these newer generations perform better in off chamber and awkward deflection situations

Cyberhatter (May 15, 2020 at 14:01)
@artistformlyknowasdan: Correct. Inverted forks just don't work off the show room floor. To flexi when you need them.

liv2mountainbike2 (May 15, 2020 at 15:24)
Absolutely loved my Maverick DUC32 fork! Still have one in a box somewhere, but been meaning to get it refreshed.

artistformlyknowasdan (May 15, 2020 at 15:29)
@Cyberhatter: I wanted to love my shivers but in reality they were awful

mensch-mueller (May 15, 2020 at 11:36)
More info on this on VitalMTB. Especially on the most interesting Ingrid components... But I'm not sure about using PA as material for the derailleur cage, always prefer metal...

woofer2609 (May 16, 2020 at 10:10)
@dannomyte: From what I recall, the Smoke was fitted front and rear, but as a front it wasn't really that fantastic up front, so people started mounting Porcupines up front. At the time there wasn't a Dart yet offered.

vinay (May 15, 2020 at 6:28)
Is that a Yep seatpost? Also, are the (Time?) pedals actually European made? There obviously are some good European made platform pedals out there so there are options.

NateMob (May 15, 2020 at 8:36)
@climber72: I asked the founder of Revel at an event last year if there was any plans or ability to long shock the current rascal. His reply was "no, we've really optimized it and its maxed out at 130" just like that it wasnt a contender for me any longer.

Shitty if its easily bumped to 142.

climber72 (May 15, 2020 at 9:06)
@NateMob: you should check out the Canfield one.2 or wait for the new riot later this year if covid hasn’t put it on hold. Cbf platform rides bigger than the numbers would make you think.

PHeller (May 15, 2020 at 9:32)
My guess is that with a 210x55 shock some tires would make contact with the back of the seat post. In an effort to make things simple, they just specced the bike with a 210x50 shock that would fit all 29x2.6 tires available. Easy way to check - amount shock, alloy suspension to fully compress, check tire clearance.

NateMob (May 15, 2020 at 9:56)
@PHeller: Unfortunately not so easy to check if you dont already own the bike. But yeah i imagine you're right even squeezing a 210x52.5 in there would be a cool experiment.

PHeller (May 15, 2020 at 9:36)
It's interesting that Intend's products are viewed as premium despite the raw/grey anodized coloring. I'm struggling to get a good color combo going on my bike with similar grey anodizing.

hubertje-ryu (May 16, 2020 at 12:41)
The tires and ceetec components are hideous (too many brandingz), frame is rather meh (xcept for the color) but everything else I would ride.

L0rdTom (May 15, 2020 at 6:05)
True, although I’d imagine these are unnaturally made white, as natural rubber is not durable by itself.

But it looks beautiful!

Adamrideshisbike (May 15, 2020 at 5:58)
You'd take a serious razzing from this guy if you showed up to ride with those tires. That bike is sick though.

flipoffthemonkeys (May 15, 2020 at 17:47)
one of those ceramicspeed derailleur cage oversize jockey wheel upgrades would have been appropriate

RowdyAirTime (May 15, 2020 at 8:17)
Since they are vegetarians & don't kill animals, they must be using some man made materials, not leather on the seat. Why is no-one talking about the most important part of this bike, the "memory foam" in the saddle...sure sounds comfy