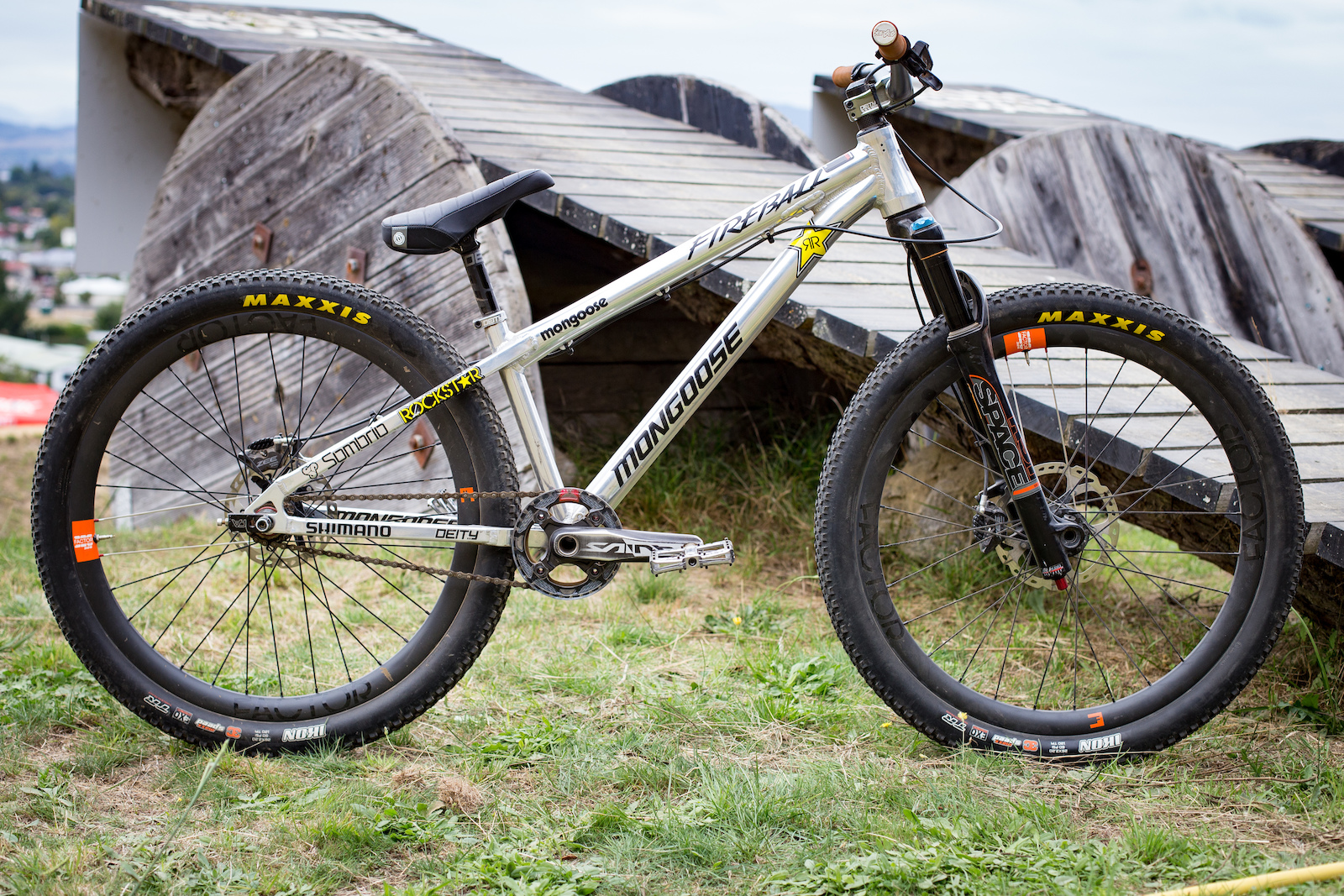 Greg Watts has been flipping and spinning bikes for years at this point and is showing no signs of slowing down. As one of the top riders in the Crankworx Speed and Style event, Greg's ability to throw big tricks while on the clock against another competitor is uncanny.

The Santa Cruz, CA native now resides in Reno, NV. This year he will be making the rounds at all of the Crankworx stops, competing in both Dual Speed and Style and Dual Slalom.

For the events this weekend Greg is rolling with one bike, his Mongoose Fireball. He's not changing too much on the bike between the events and is just running it how it is. 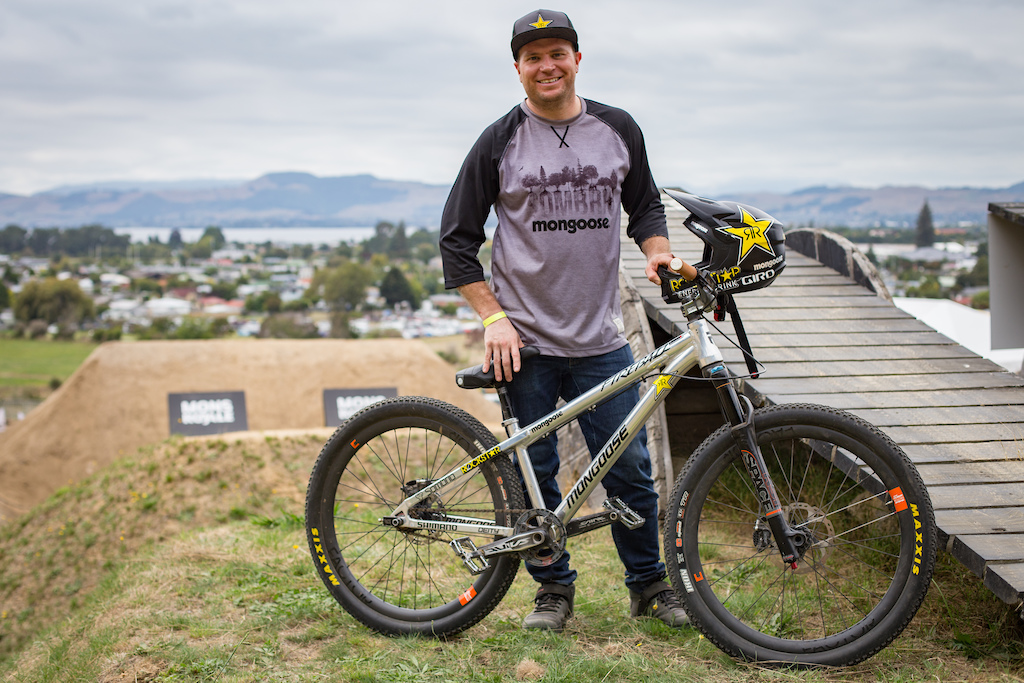 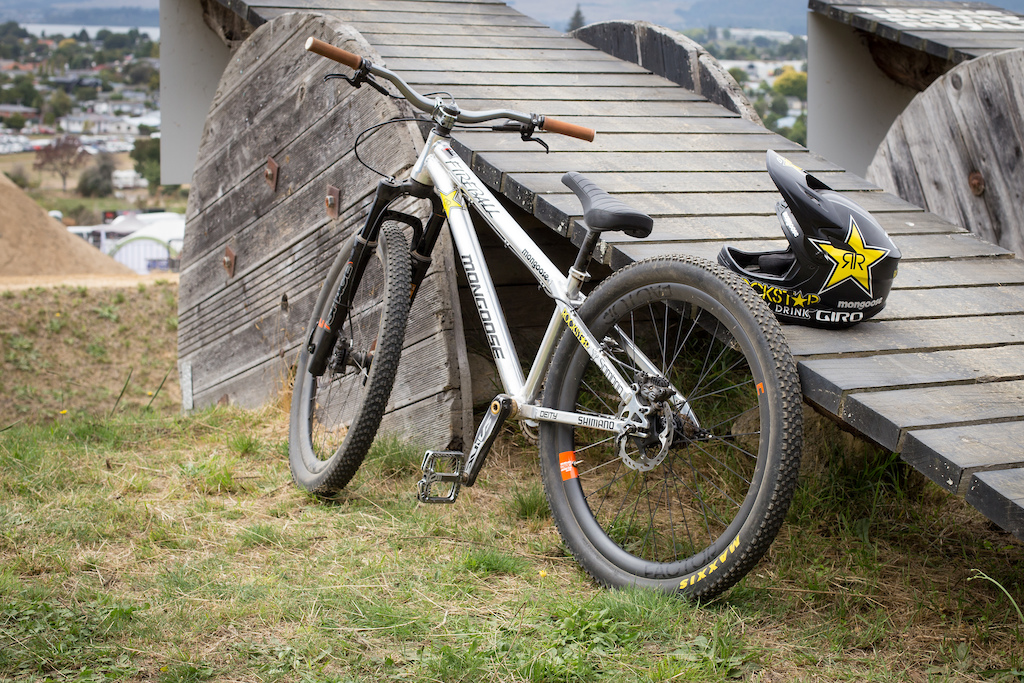 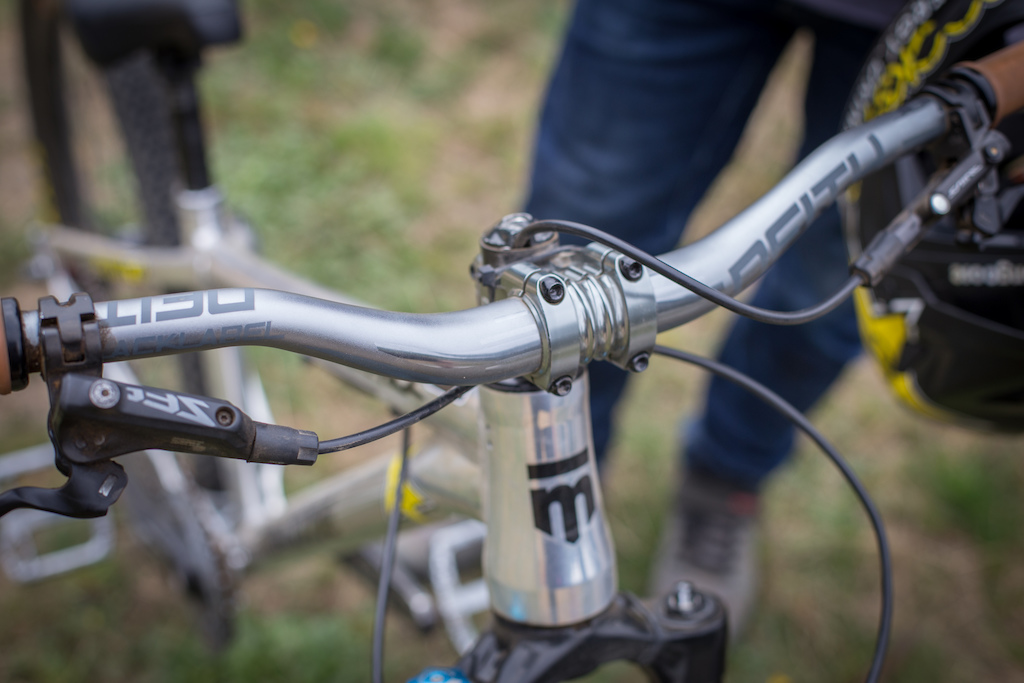 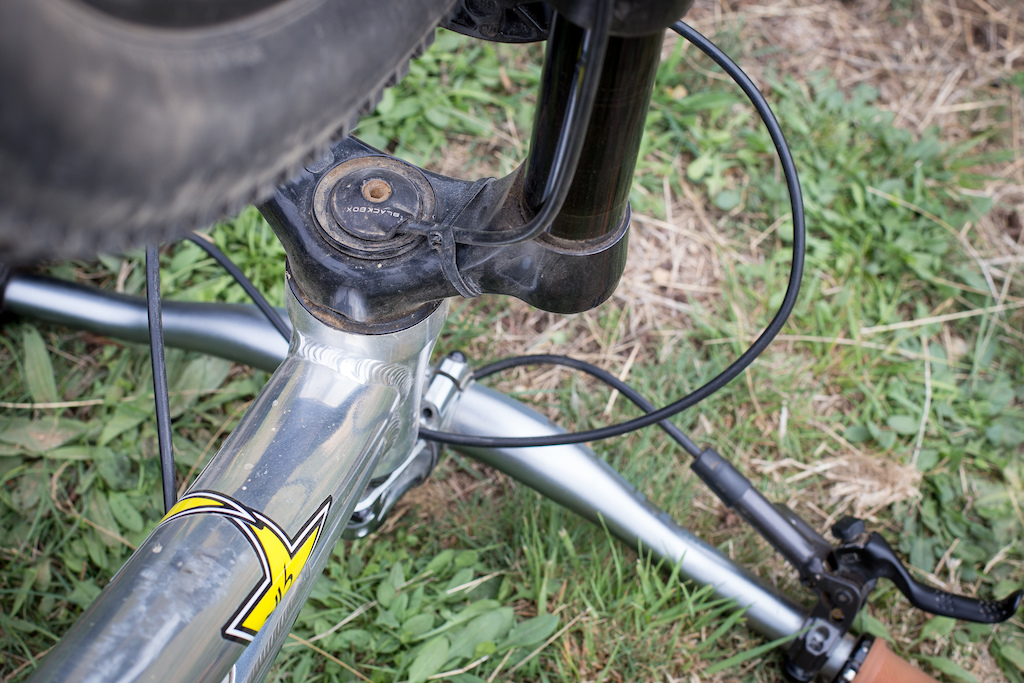 Greg runs his bars fairly narrow at 27.5" / 700mm for barspins. You won't find a gyro on his bike as he wants all the power he can get with his brakes. When he does bar spins or anything that will twist the cables up, he says it's no issue to reverse the spin direction next trick to straighten things back out. 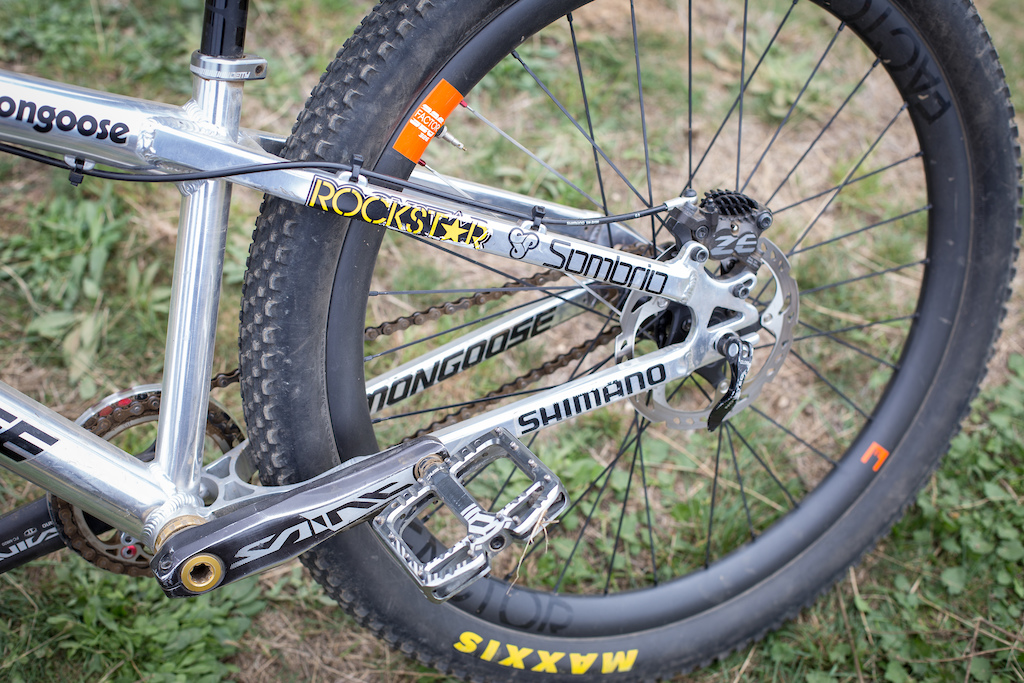 Greg runs Maxxis Ikon tires. He has a bit higher pressure up front - 42psi, vs 40psi in the back to keep the front end from wanting to slide or get squirrely when pushing down hard while initiating tricks and going off of the lip of jumps or hitting berms fast too. 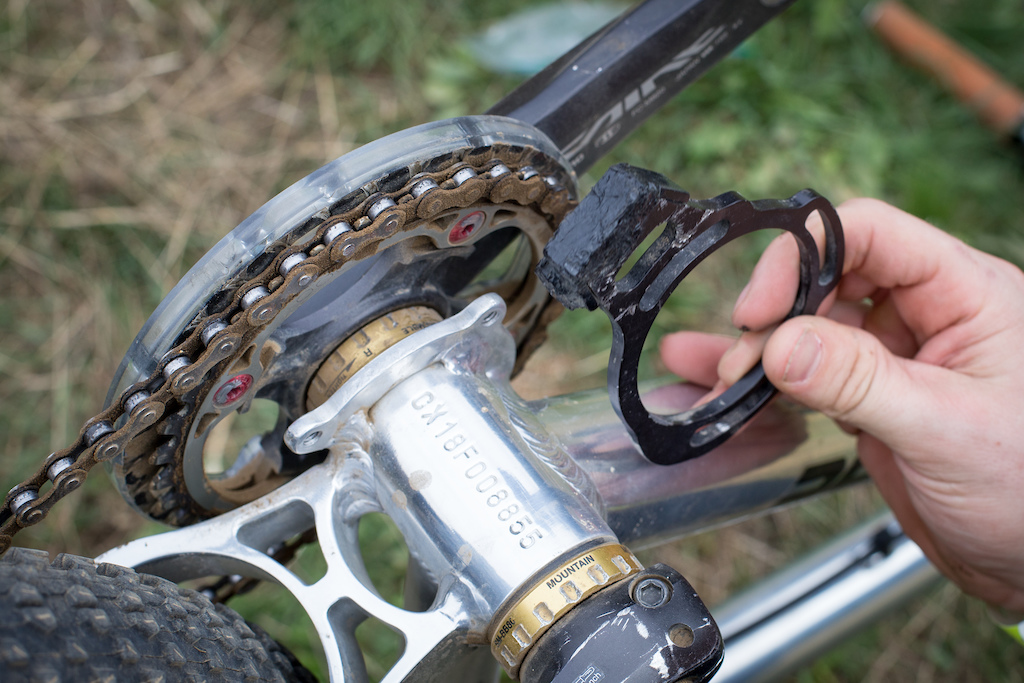 For dirt jumping, Greg has a homemade crank stopper setup. It's a Gamut chain guide that rubs against the chainring and stops the rotation of the cranks. He's taken it off for the weekend since it causes extra drag. 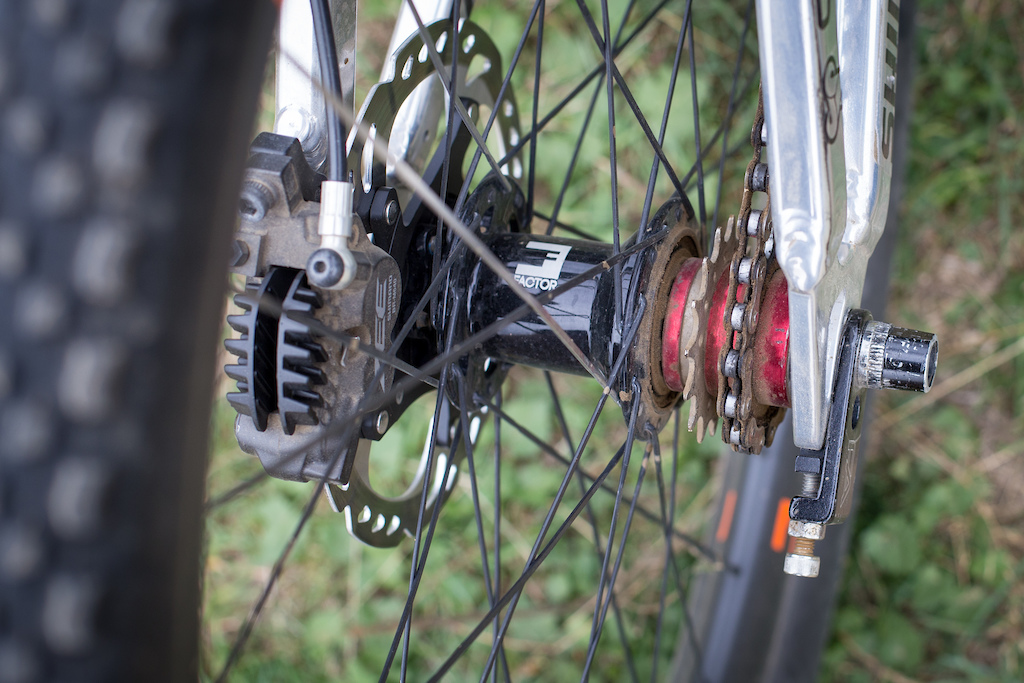 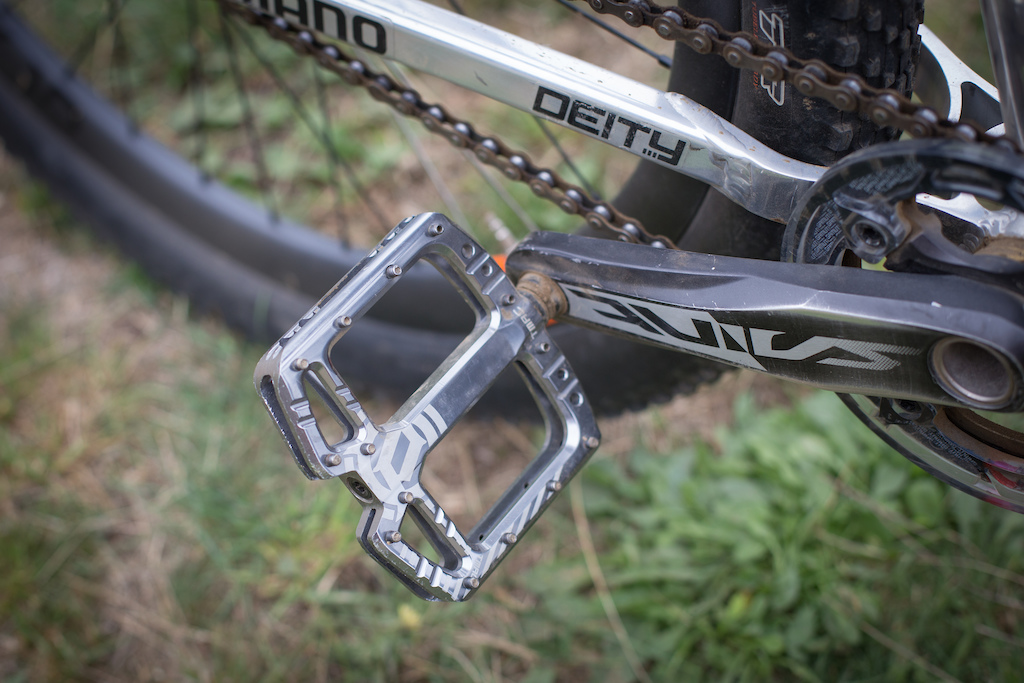 It's less exciting than it looks. No, there's no reason for two cogs other than running out of spacers and using a single speed cog of the same tooth count to take up space. For pedals, Greg is using Diety's TMAC. 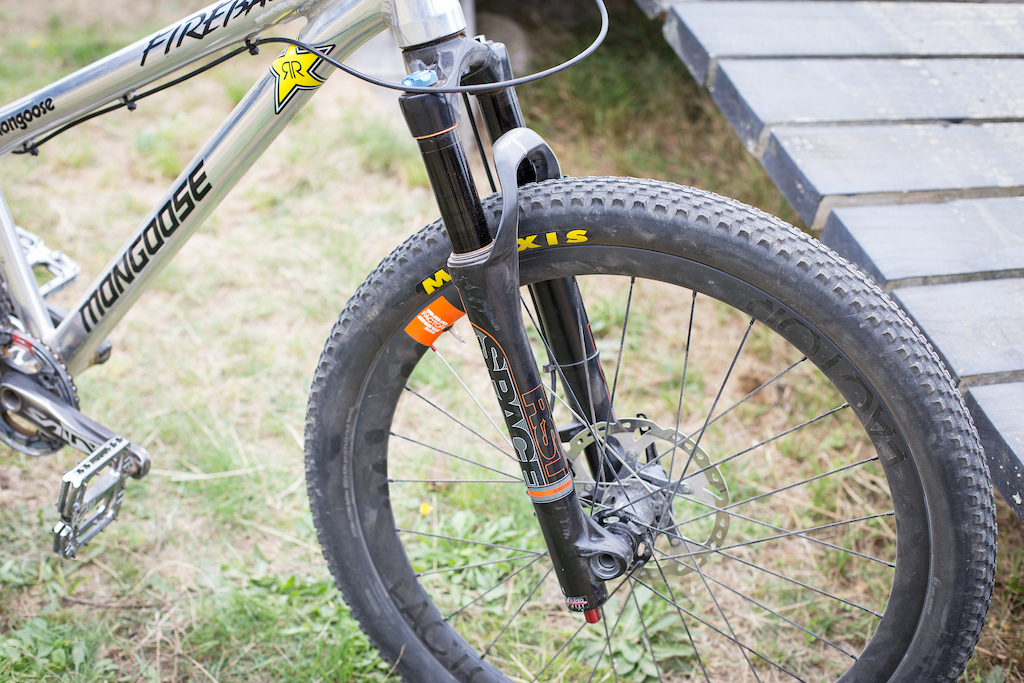 Greg has the RST Space up front to smooth things out on course. The fork is set up a bit softer this weekend to give some extra traction in the turns with all of the dust and dry conditions.
MENTIONS: @mongoosebikes / @gregwatts1987

sixyearsondope (Mar 22, 2019 at 8:31)
WOW nice frame! Always saw nice Mongoose bikes in vids and online. Where I live at... only place you'll find a Mongoose bike these days is at a SportChek or under a few coats of spray paint in the 'hood! Dang I really want that frame now.

thatsright (Mar 21, 2019 at 13:02)
Ha. We were talking about that. All these new mt. Bikers with $10000 bikes and they can’t ride for shit. Kinda like the kid making a comment about the riders looks. People are dumb. If you have skills you don’t need a $10000 bike. A good bike makes a huge difference, however it still comes down to the rider.

thatsright (Mar 21, 2019 at 12:57)
Last year he places third in Austria crankwork for speed and style. And places second in crankworx Whistler at speed and style. That’s just a few. The guys insane. The new kid is good but let’s see where he’s at in another 13 years.

privateer-wheels (Mar 20, 2019 at 19:13)
Those factor hubs are still the best kept secret in wheel building. I don't understand why more people aren't on them.

privateer-wheels (May 3, 2020 at 13:05)
@nurseben: Star Ratchet you mean? As in DT Swiss? Factor hubs come stock with 120 point of engagement, DT Swiss come stock with 18, and upcharge you like crazy for the upgrade.

Reliability as well - Factor hubs have a very good track record of reliability.

chainspotting (Mar 20, 2019 at 8:21)
Surprise surprise mountain biking happened before thru-axles!! It's a common misconception people think QR is only as strong as the piddly skewers in reality the section of the hub the frame actually sits on its more than strong enough for vertical impact. The skewer laterally holds no where near as stiff as the thru-axle type and there is the big advantage of that type.

mkotowski1 (Mar 20, 2019 at 9:24)
People been airing out bmx bikes with slider dropouts and no chain tensioners for decades

DarrellW (Mar 20, 2019 at 11:39)
@mkotowski1: Not with a QR though. They're either on 10mm nuts or 14mm. With a BMX, it's basically a case of tightening it as much as you can with whatever tools you have. I recently bought a torque wrench as I now have a road bike and a cyclocross bike and I was shocked at how little force needs to be used.
Post a Comment