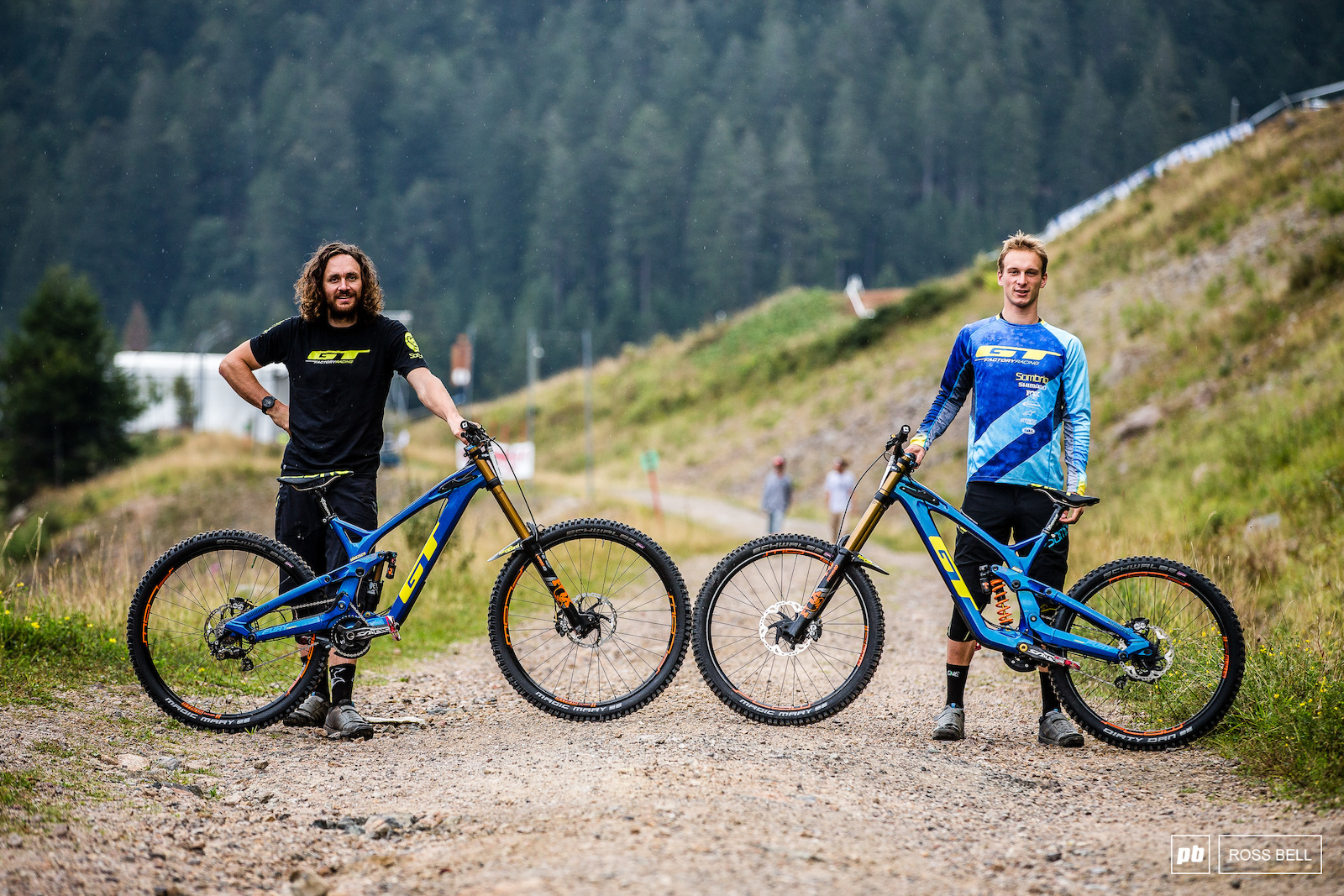 Wyn Masters & Martin Maes
Martin Maes and Wyn Masters will both be racing aboard the new GT Fury this weekend in La Bresse, but although their bikes look similar from a distance, there are a few key differences in their setups. Most notably, Martin is on 27.5" wheels, and Wyn is on 29" wheels. That has more to do with familiarity than anything else - Martin's been racing a 27.5" bike on the EWS circuit, and wanted the fit of his downhill bike to mimic that as much as possible. He's even dropped the fork travel down to 190mm in order to help him get his weight over the front wheel - again, in order to make the switch from a single crown enduro bike to a dual crown DH machine as seamless as possible.

Next year it will probably be a different story for Martin - he says that, "I'm planning to do more downhill racing in the future – hopefully we have a bit of time in the winter during the off-season to go testing and maybe try the bigger wheels." 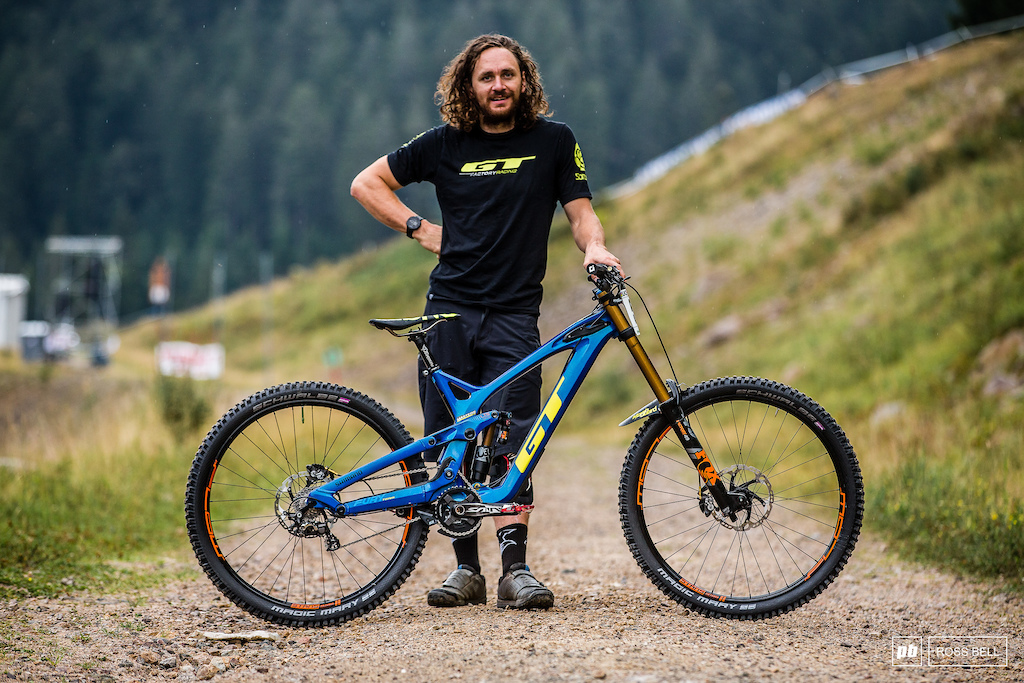 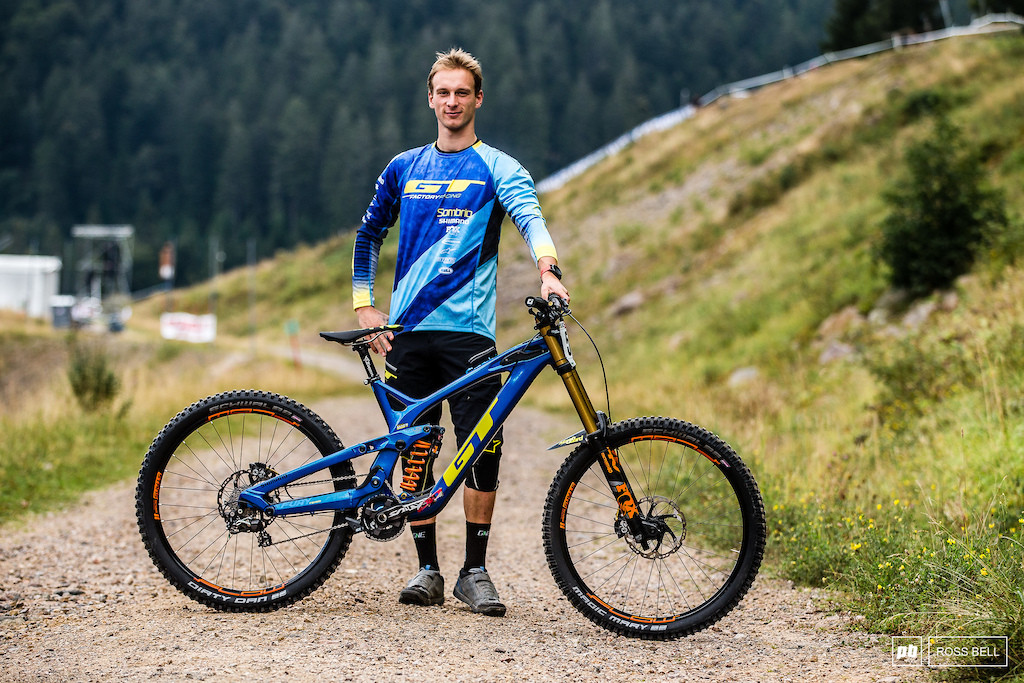 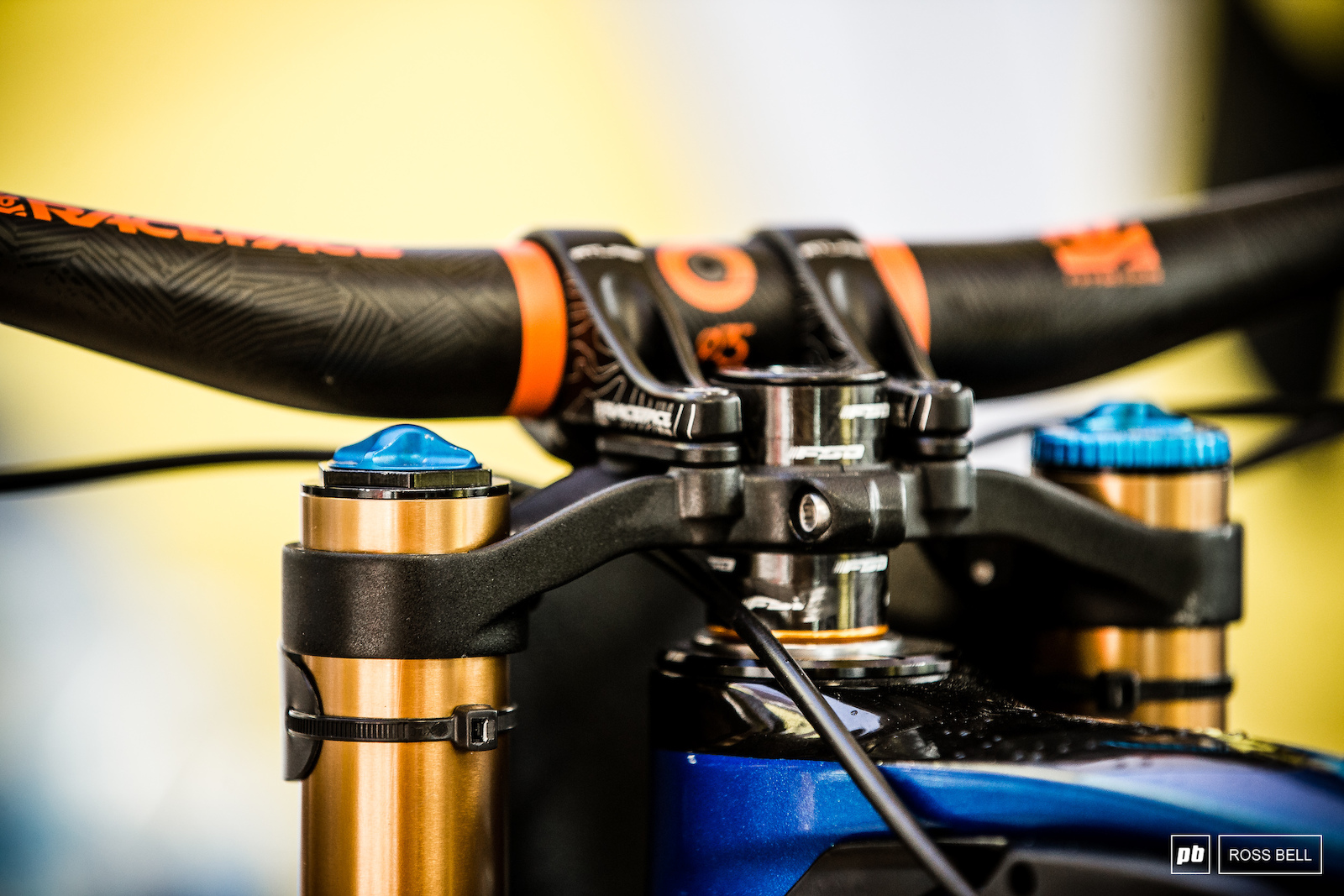 Wyn's an inch taller than Martin, and his bar height reflects that. Both riders are running 780mm Race Face SixC bars, with 20mm of rise. 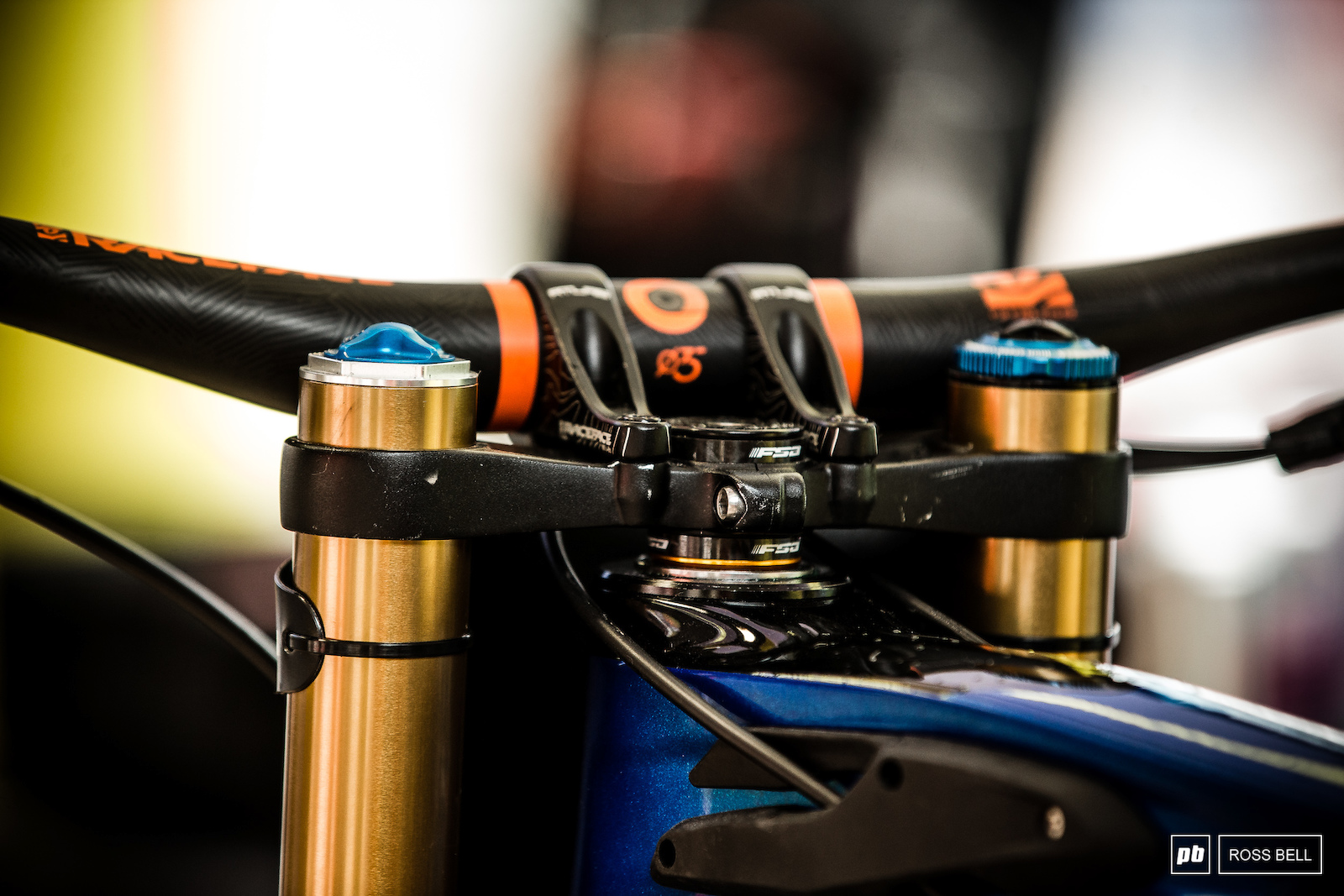 Martin's running a fairly low cockpit setup, with his fork dropped down to 190mm, and one spacer under the crown. 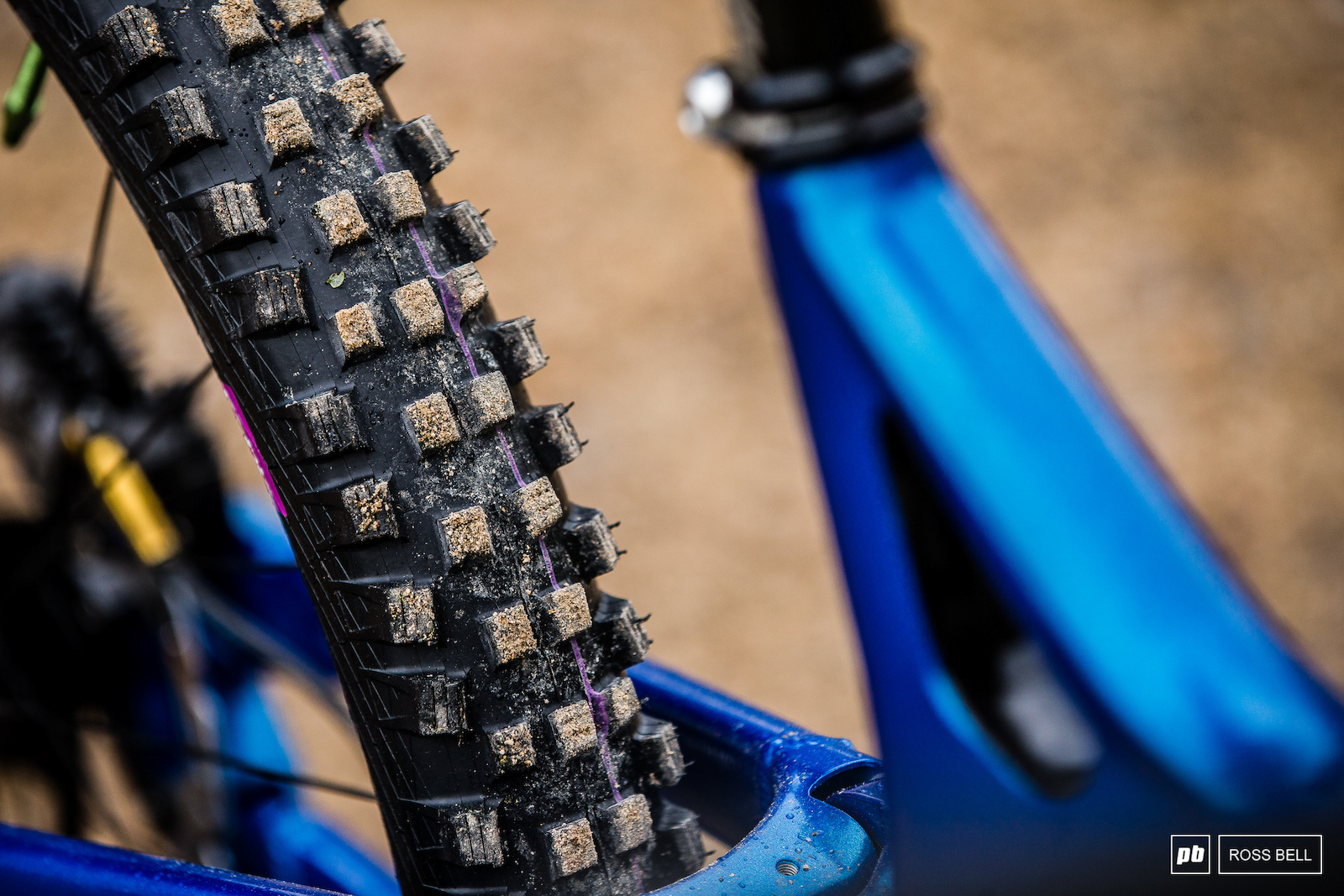 Wyn's running Schwalbe Magic Mary tires, with 26 psi in the front, and 28 psi in the rear. There's also a CushCore insert in the rear for a little extra flat protection. 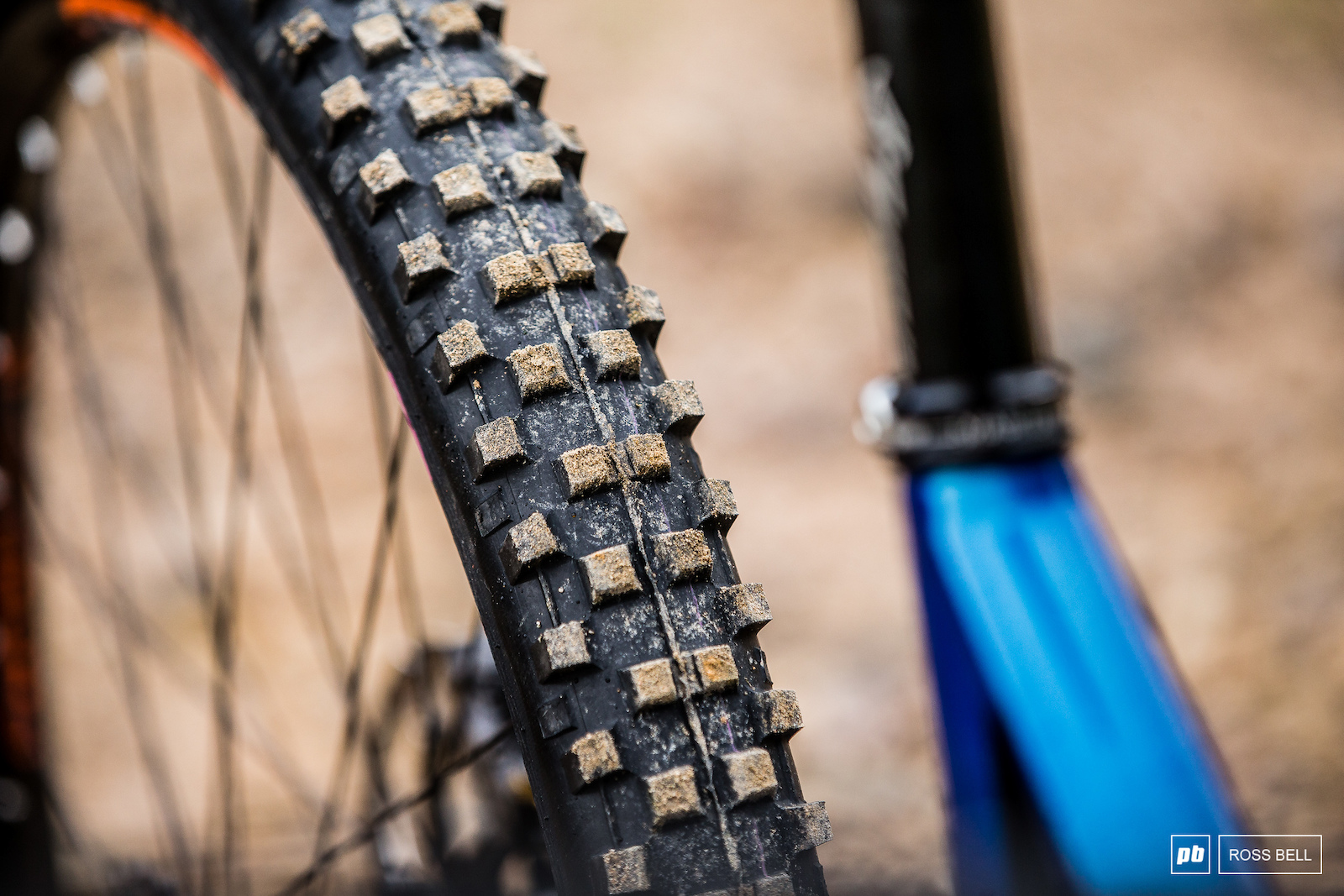 There's a cut down Schwalbe Dirty Dan on the back of Martin's bike, the same tire he uses for EWS races. He feels that it's faster rolling than the Magic Mary. 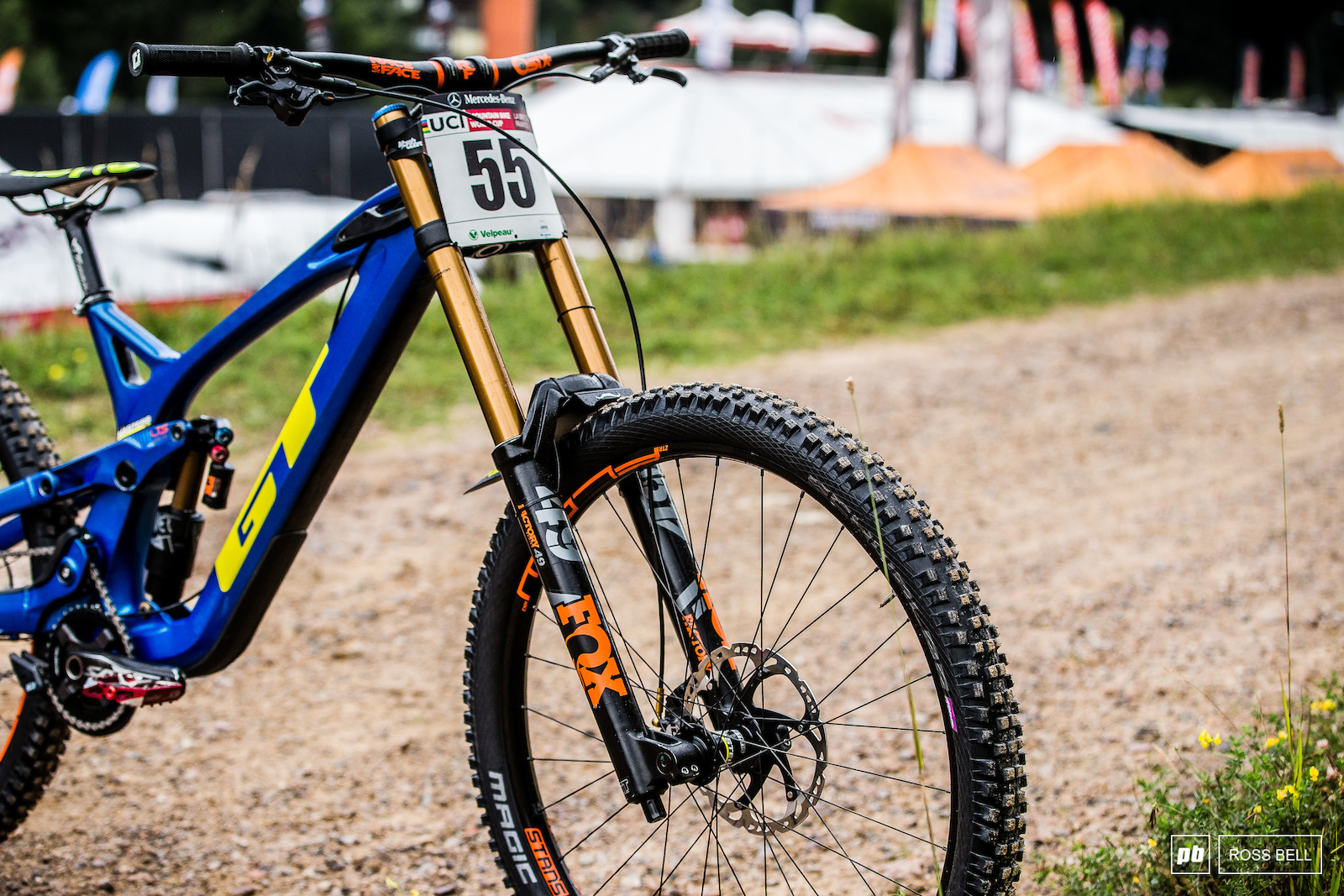 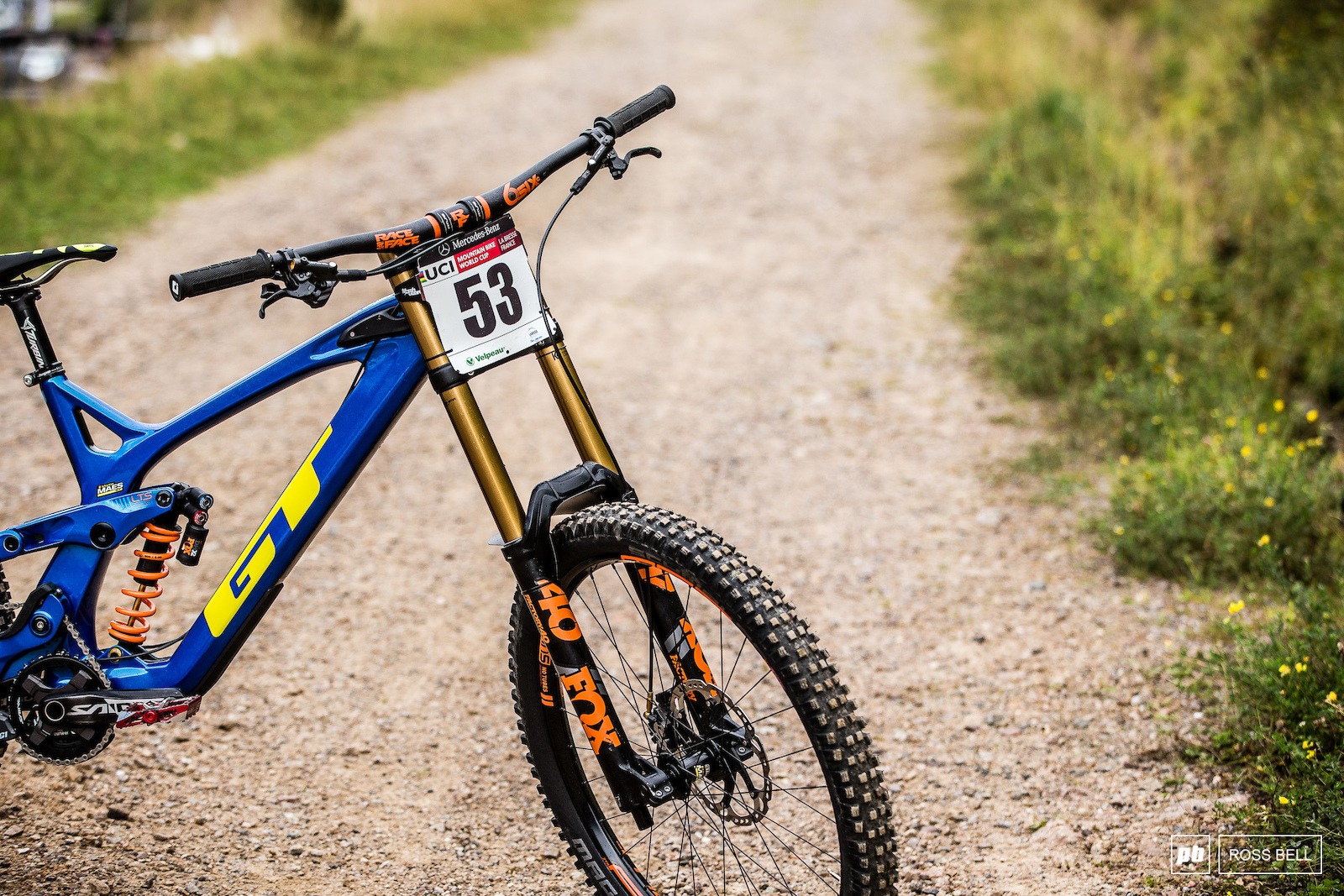 Martin wasn't sure about his suspension settings, but don't hold that against him - he hasn't been on a DH bike since Fort William, where he placed 10th. 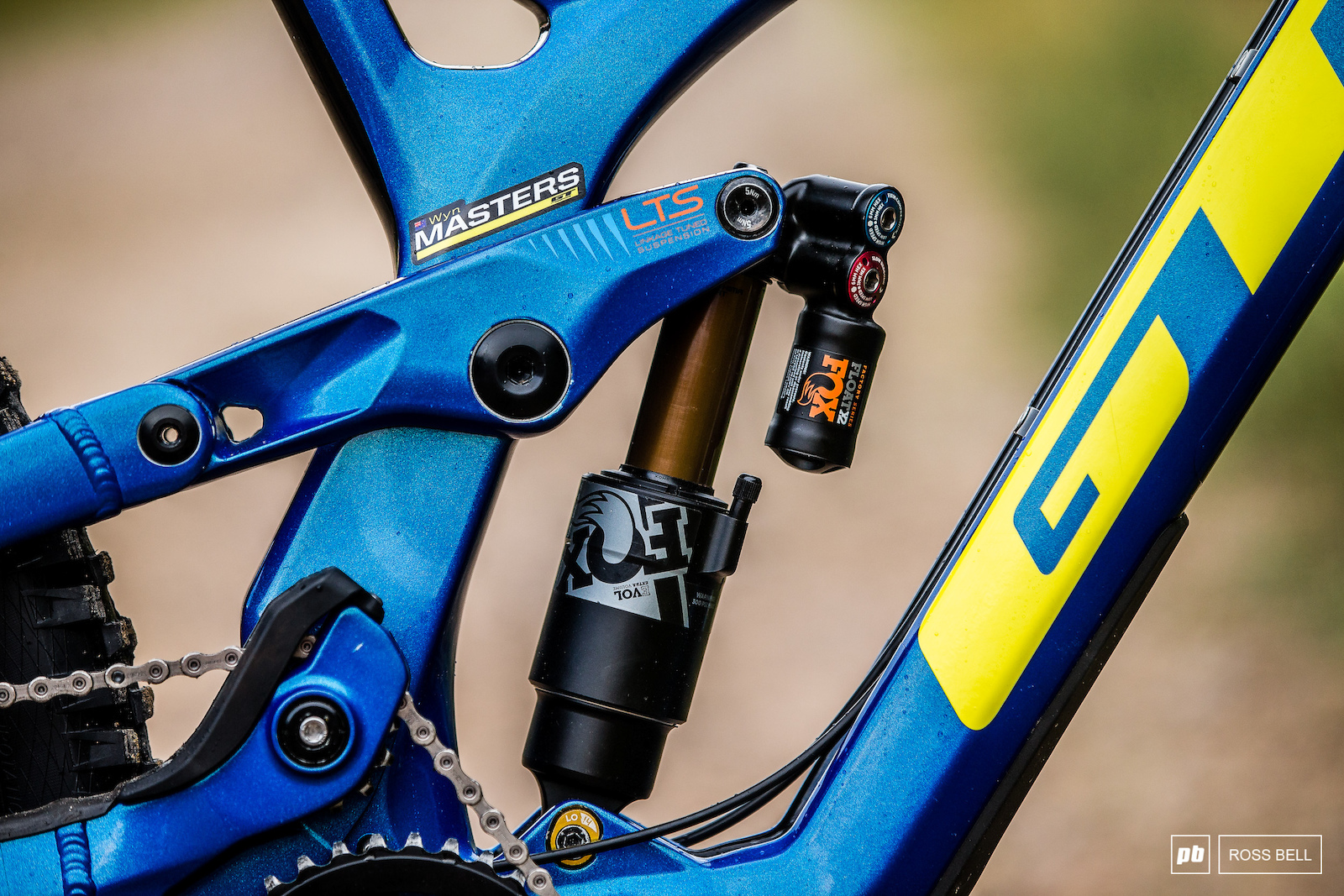 Wyn's experimented with air and coil shocks, but said he prefers the adjustability of an air shock, whether that's adding or subtracting pressure, or using volume spacers to alter the end-stroke ramp up. 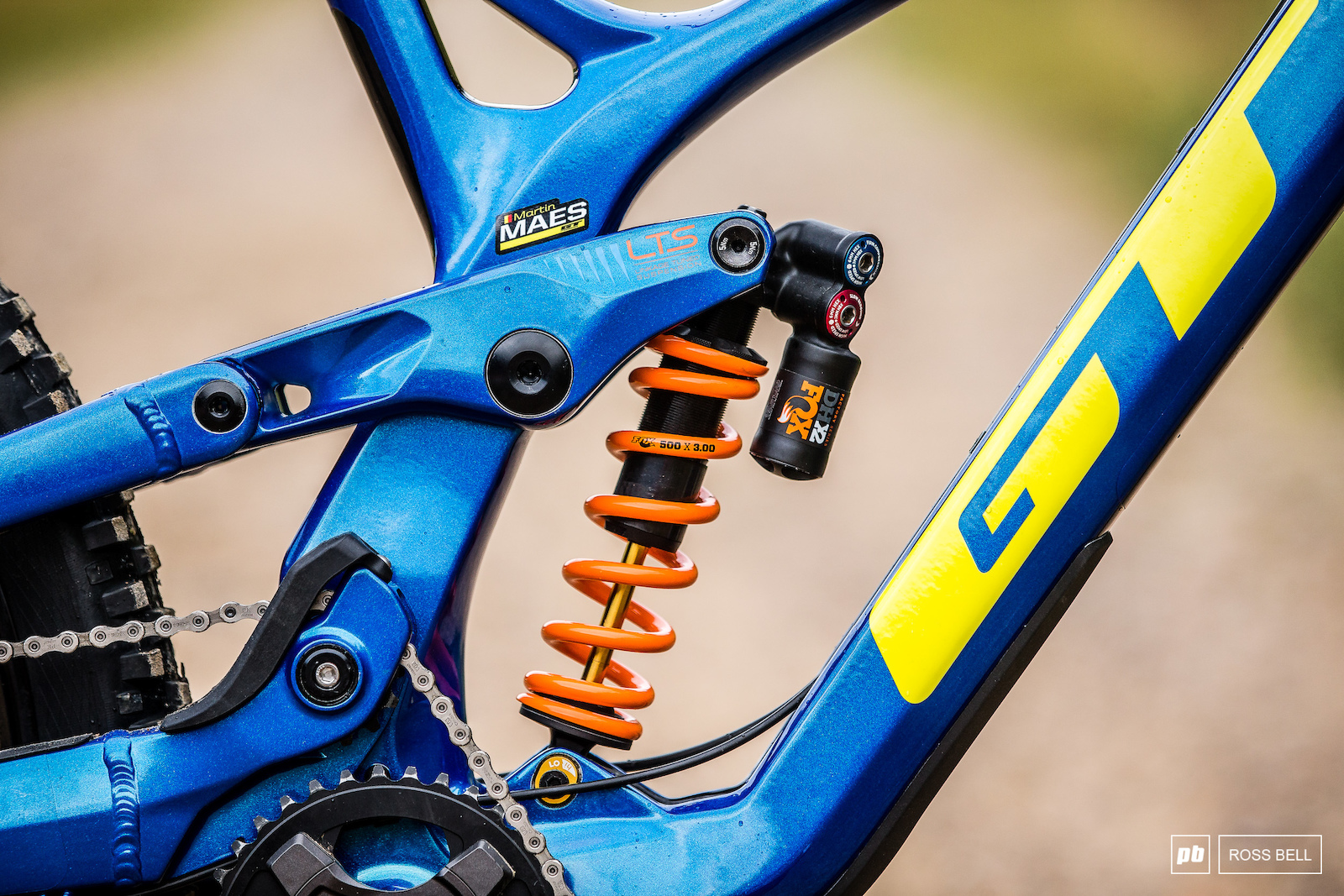 Martin has a coil spring installed, but he'll be trying both options during practice to see what he prefers. He also mentioned potentially running his bike in the higher geometry setting - the La Bresse track has some flatter sections, which is where Martin says that setting makes the bike "feel more reactive."

EnduroManiac (Aug 24, 2018 at 4:40)
It shouldn’t just be side by side but also "inside by inside". It looks like they use a different air spring on the forks (just by the anodized black stuff below the blue cap on Wyn’s bike) and a different compression cartridge (Maes on Grip2 and Masters on old RC4).

zdubyadubya (Aug 23, 2018 at 20:03)
In the last pic of Martin's bike, mechanic screwed up--he's got a stiff link in that chain where the chain pin was put in. Now that shimano makes quick links, wonder whats behind still using a pin...

RichardJBos (Aug 24, 2018 at 1:50) (Below Threshold)
Could have been a quick trackside fix at an EWS stop and it just hasn't been replaced yet?

NebulousNate (Aug 24, 2018 at 6:57)
@RichardJBos: Well thats not his EWS bike so probably not. Maybe it has something to do with how long the chain needs to be for the idler set up and they had to mate two together.

lifted-d (Aug 25, 2018 at 10:33)
Quick links can 'fall apart' if pinched in a der or chain guide as it clatter and suspension is moving. this is not good. I have them in my repair kit, but all my chains are pinned.

maglor (Aug 27, 2018 at 5:03)
@lifted-d: I've had pinned chains fail on me but never a quick link, i think the pinned one broke on me because its quite hard to get it in right, you either make it to tight and have a stiff link (as pictured even world cup mechanics can have that issue) or too loose and the pin can rip out under pressure. you can't really get a quick link wrong and they are solid due to the lip that locks them in when pulled tight.

5afety3rd (Aug 29, 2018 at 17:59)
@maglor: as a professional mechanic I entirely disagree. I see far more broken quick links (mostly kmc) than properly installed pins. The pin isn’t very hard to do at all. People tend to reuse quick links and that’s usually when they break.

maglor (Aug 30, 2018 at 0:49)
@PaulLehr: I've also worked as a mechanic and it might just be luck or fluke but have not seen a broken quick link it's always normal pins (not just the joining pin i should add)

My point was more about user error, as you point out people reuse them or don't know what they are doing, if you are a mechanic of course the pin is easy but for your average joe its much easier to work a quick link, its pretty idiot proof while the pin isn't, i'm sure you know how wrong some people can get things if you work fixing them.

RedBurn (Aug 24, 2018 at 0:59)
Martin maes will destroy the opposition in the next few years, he's just mental. At 15yo he was already faster than nico vink here on the belgium dh circuit (yes we did have a championship !) just imagine

marincelo (Aug 23, 2018 at 23:34)
Why is beefier tire on the back weird? I usually ride beefier tire with more pressure in the back since it gets the most pounding.

brand-new (Aug 24, 2018 at 2:12)
Mad how Wyn has raced the whole series yet Martin has raced only Fort William and is still ahead of him in the standings, at least if the number boards are correct

t-stoff (Aug 24, 2018 at 10:01)
I think Wyns role is different from other GT riders and it's clearly not aimed at being ultra-competitive. He's social media presence is big. it's more like an ambassador.

optimumnotmaximum (Aug 23, 2018 at 23:59)
I would really love to see a suspension analysis of that bike, i still can not believe they made a kind of nerdy highpivotbike and did not give tne nerds what they want -graphs

justanotherusername (Aug 24, 2018 at 2:14)
It has got to be super confusing for ayone that rides a motorbike and pushbike to have brake levers on opposing sides.

opignonlibre (Aug 24, 2018 at 3:14)
@justanotherusername: most people switch without issue. It is a bit like a motorsport driver who switch from left foot braking when racing. Ergonomics and everything is different so your brain just switch.

justanotherusername (Aug 24, 2018 at 5:32)
@opignonlibre: Hmm, not sure about that myself, the average person when learning to ride a motorbike concentrates so hard on just the basics its a pretty big added confusion.

I think a better example is a car driver switching from left hand drive to right - not right to left foot braking as the controls are still in exactly the same place, you are just using different feet.

i-am-lp (Aug 24, 2018 at 6:14)
@kiwimtber: I find it odd to have front shifter (1x these days i know) and rear brake on one side and rear shifter and front brake on the other side. It is just natural to have left hand operate front stuff and right hand operate back stuff.

Mac1987 (Aug 24, 2018 at 12:20)
@lp130i: I agree, although the 'British' way is consistent with riding a motorcycle (but that is because on a motorcycle acceleration and deceleration are on the right and clutch and gearshift on the left).

I thought about switching my bike brakes around but its really not confusing at all.

Rubberelli (Aug 24, 2018 at 7:04)
Is there a performance benefit or deficit to using steer tube spacers over direct mount spacers?

darlojones (Aug 23, 2018 at 23:16) (Below Threshold)
Why has thumbs up emoji turned into question marks? Stupid Pinkbike

vinay (Aug 24, 2018 at 1:44)
Not sure if this has been added in the article after you posted your question, but it has been described in the first few paragraphs. (So yes, one of each with the reasons mentioned up there).

ColquhounerHooner (Aug 24, 2018 at 2:34)
@MadCyborg: touché
Below threshold threads are hidden