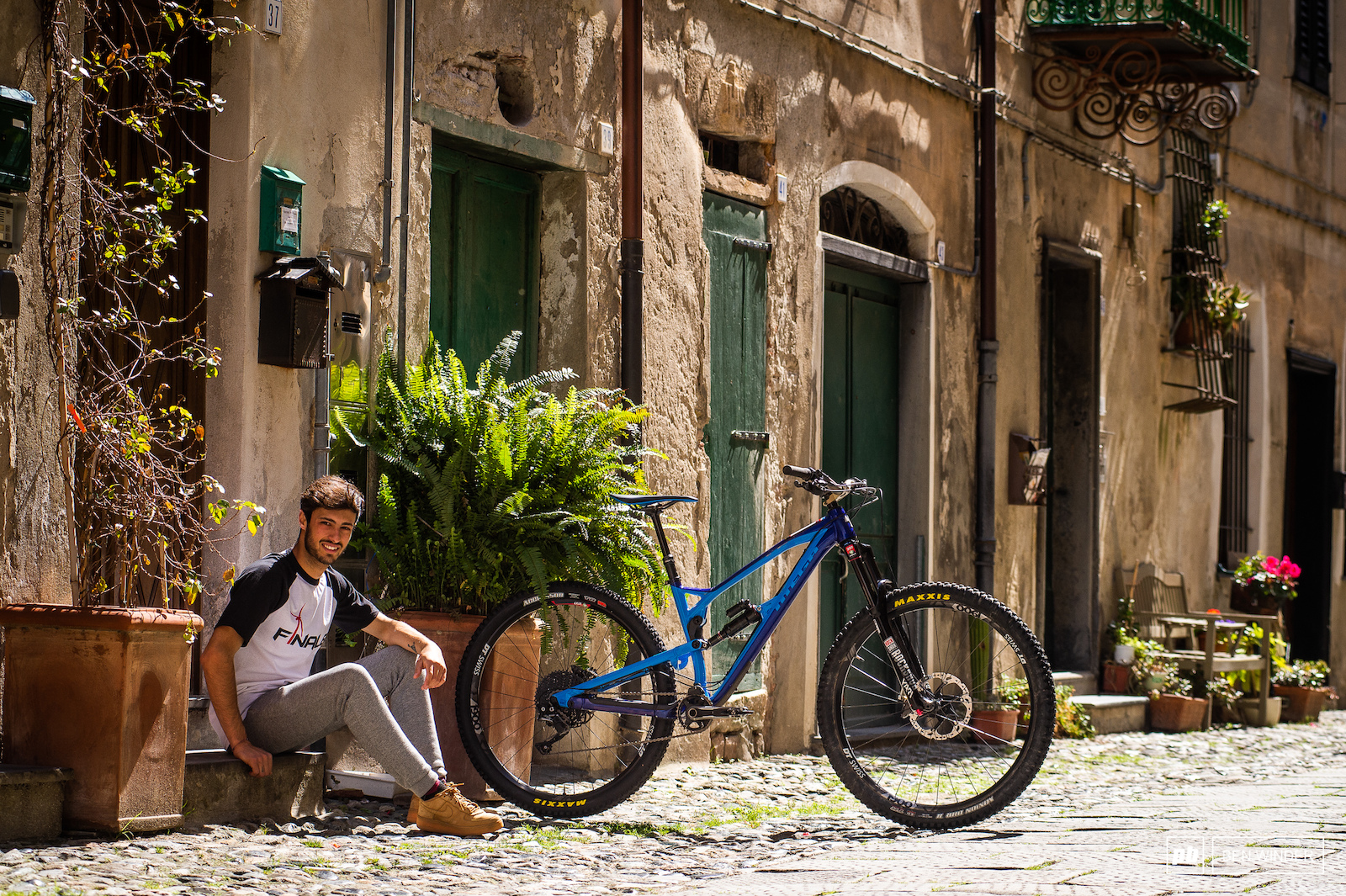 BIKE CHECK
Igor Palomba's
Nukeproof Mega
Words & Photography by Ben Winder
I've always wondered what the top pro racers would run on their bikes if they had ultimate freedom from brand connections. The Superenduro is quite a competitive series which brings in a lot of fast riders who don't have any affiliations with brands. I sat down with Igor Palomba, who hails from Sardinia and is a mega fast mountain bike guide just down the road in Finale Ligure. Igor grew up racing downhill and is now giving an enduro race a try in Pietra Ligure. Unfortunately, he'll have to wait for another weekend to find out how he compares to the others in the field, due to the race being canceled.

We took a look through around Palomba's bike and found out why he chose the bike and components he did. 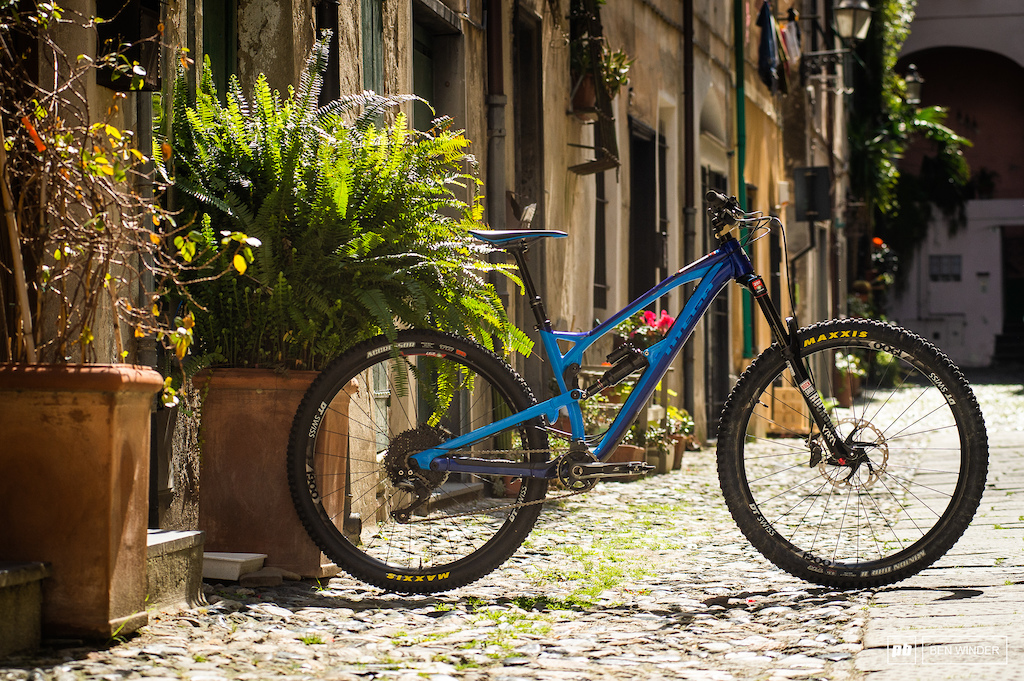 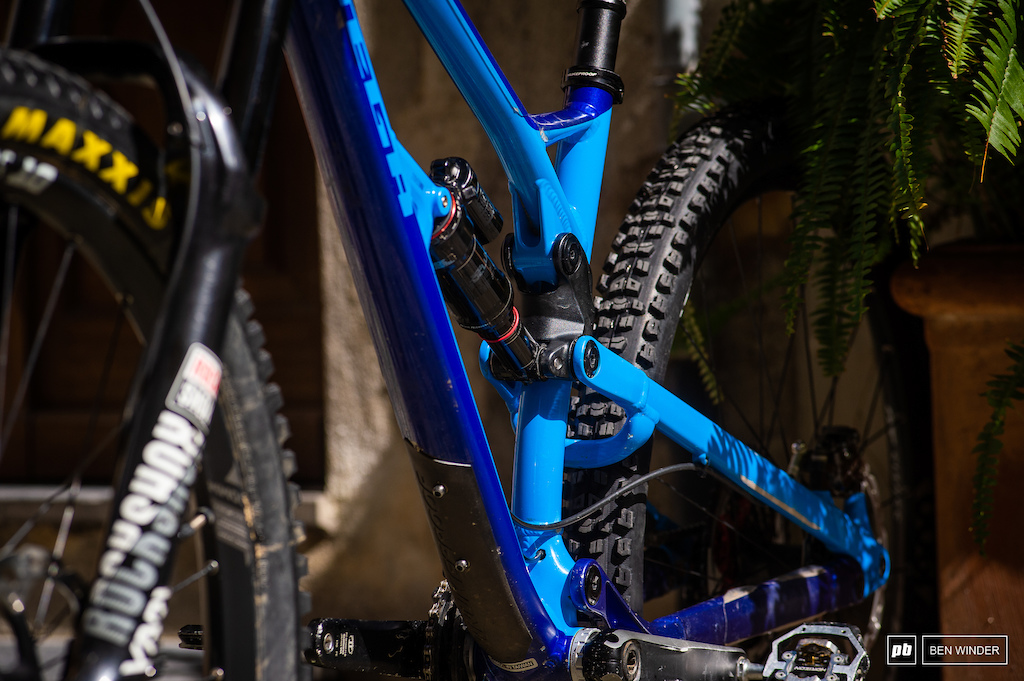 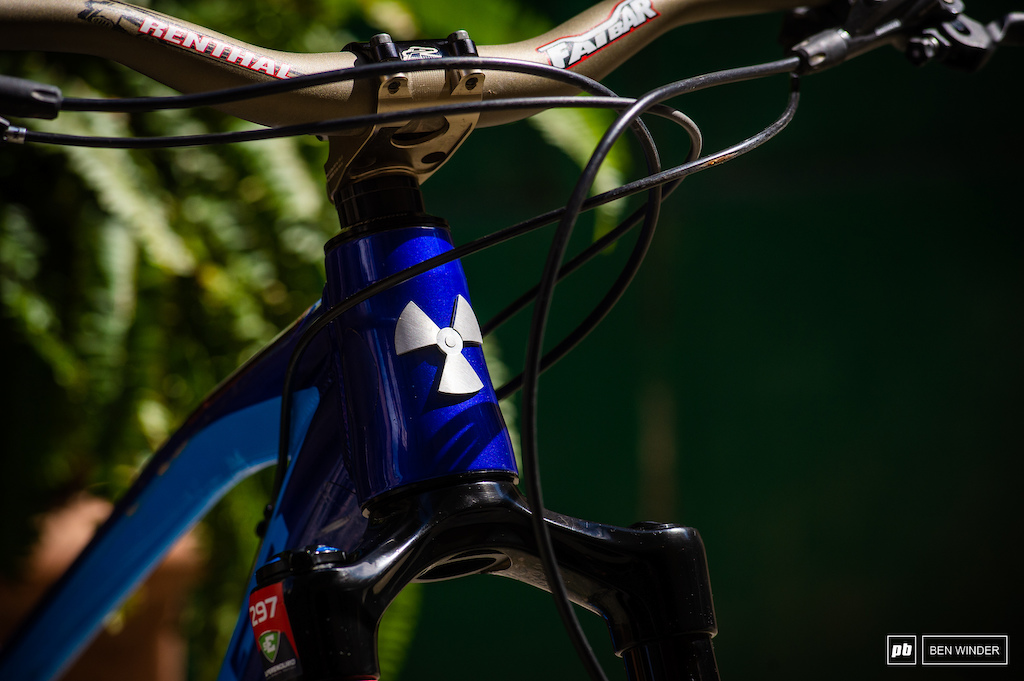 Palomba is riding a medium Nukeproof Mega 29. He likes that when he's attacking on the bike, he feels it wants to go faster, especially in cornering. He likes the way the linkage smooths out the trails and that the bike isn't too expensive. 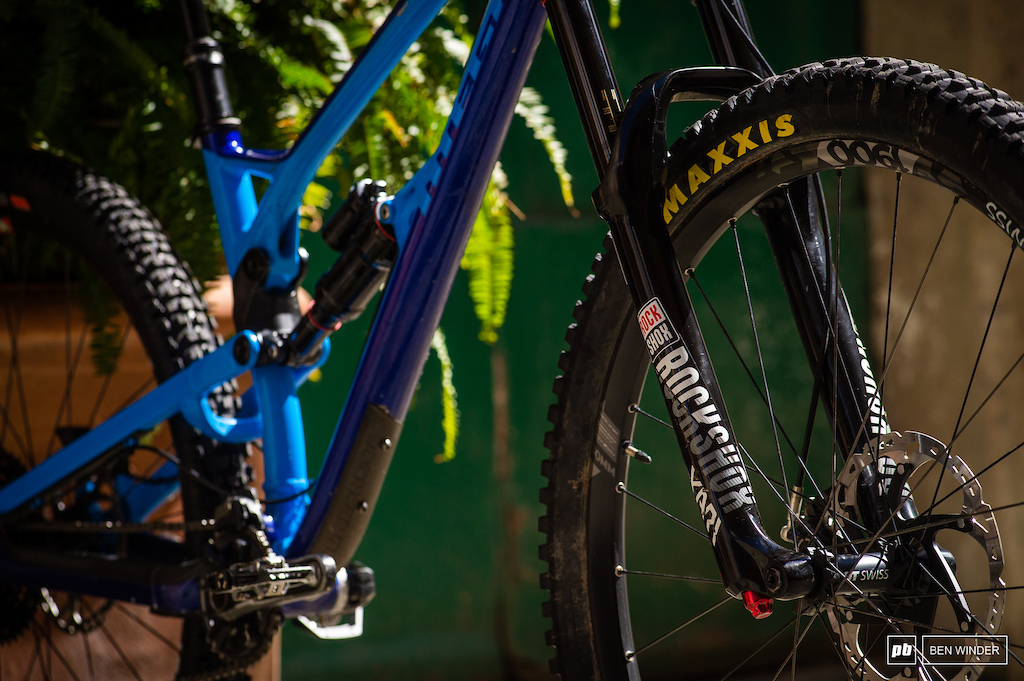 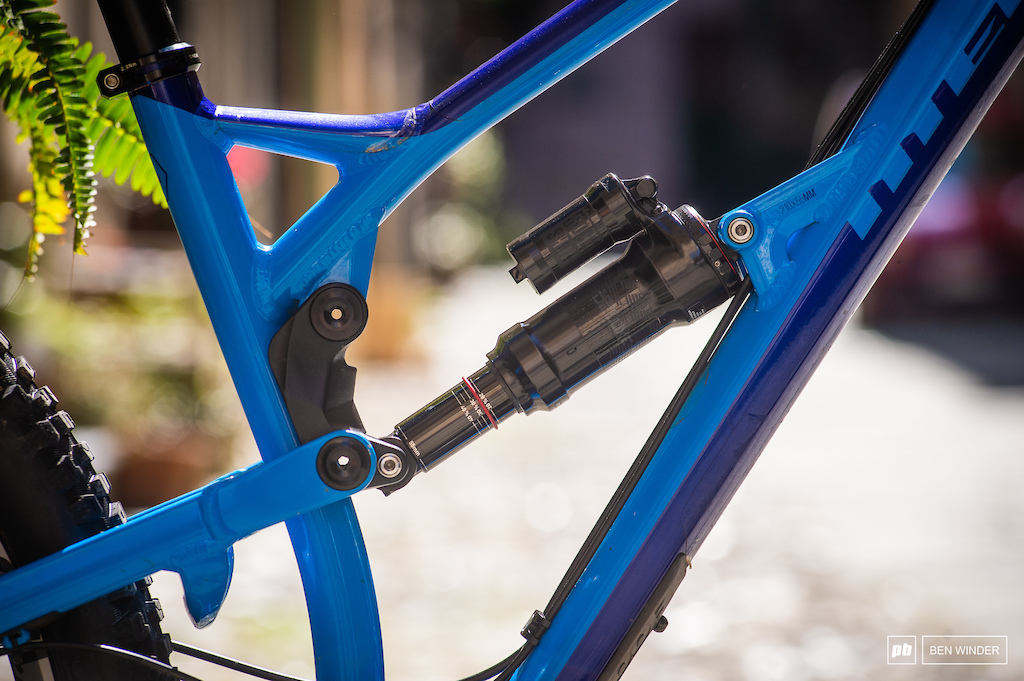 For suspension, Palomba is riding the entry-level RockShoxYari Charger RC. He says that while it isn't top of the line, the fork performs well when it's kept up to service. He's also running the stock shock that came on his frame, a RockShox Super Deluxe Air. 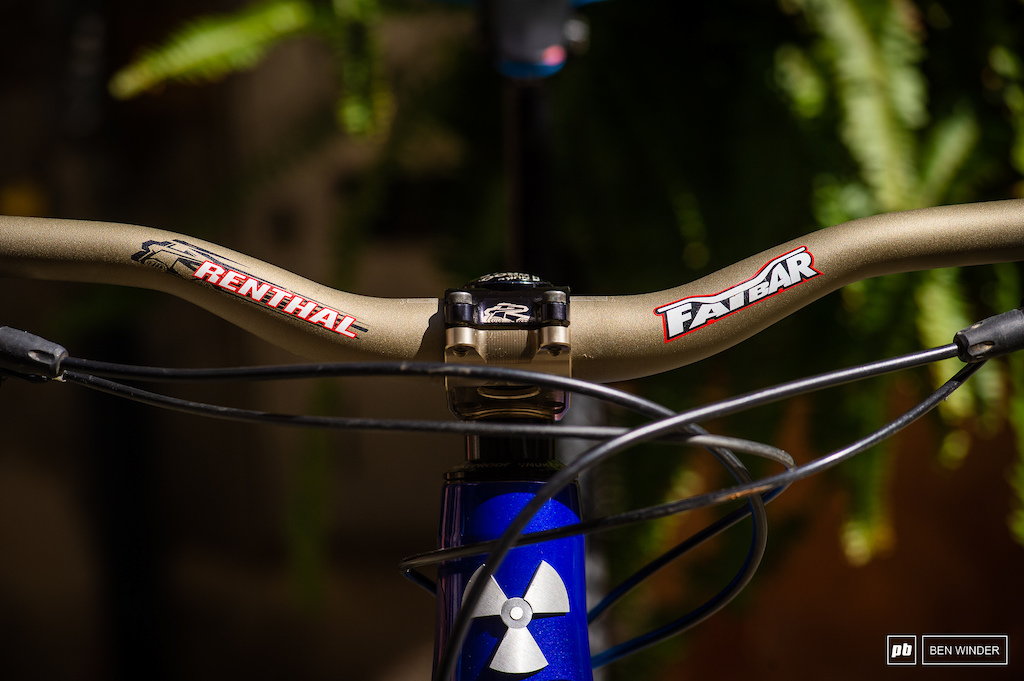 Handling bar and stem duties are Renthall's 30mm rise Fatbar and a Duo stem at 40mm. Coming from his DH background, he likes having higher bars on his bike and that makes him more comfortable. They are cut to 760mm as that fits his height and his shoulders aren't too wide. 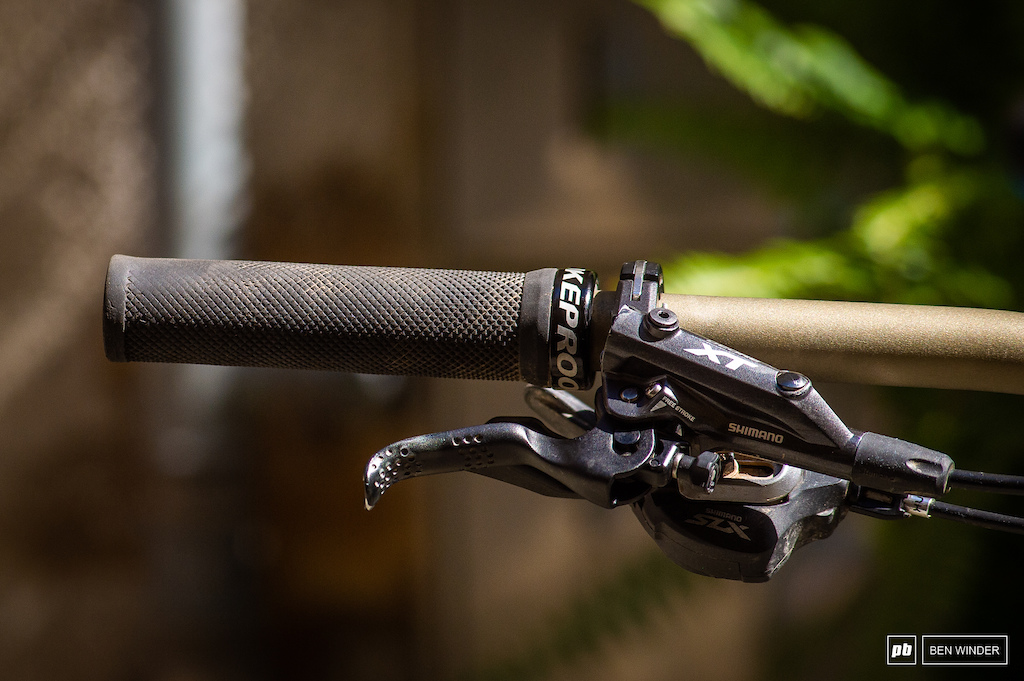 Stock grips on the bars. Palomba likes their soft compound and the smaller size fit his hands well. He also likes to ride with his hands right on the edge of the bars and these grips only have the inner clamp, making that more comfortable.
GRIPS 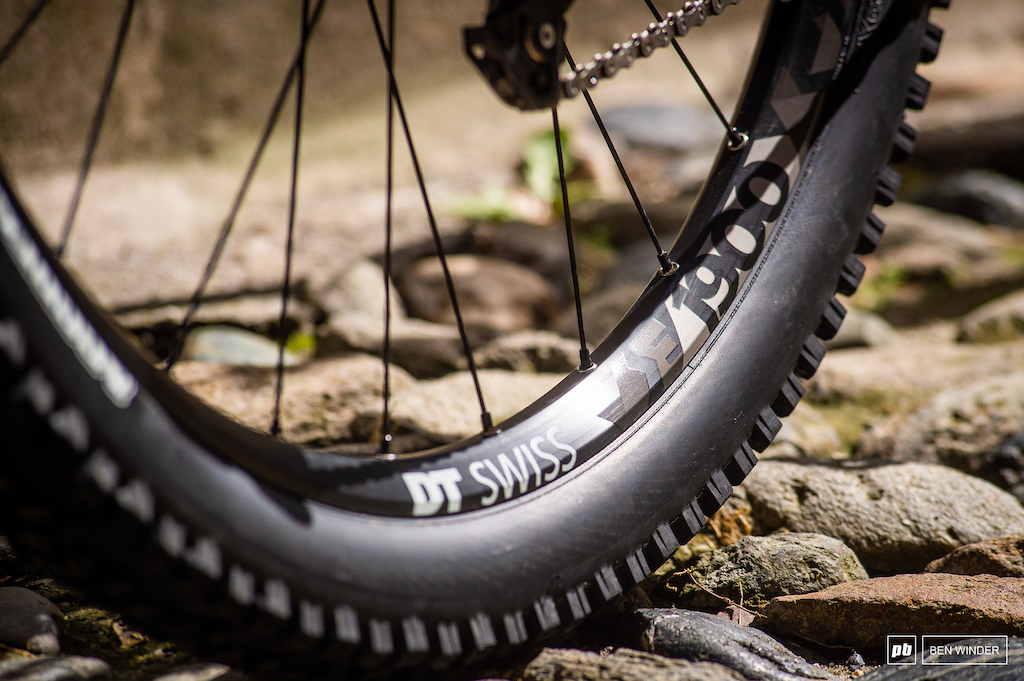 Palomba bought these wheels because he believes they hold up well under his use as a guide in Finale - the rims are strong and the bearings are good in his experience. 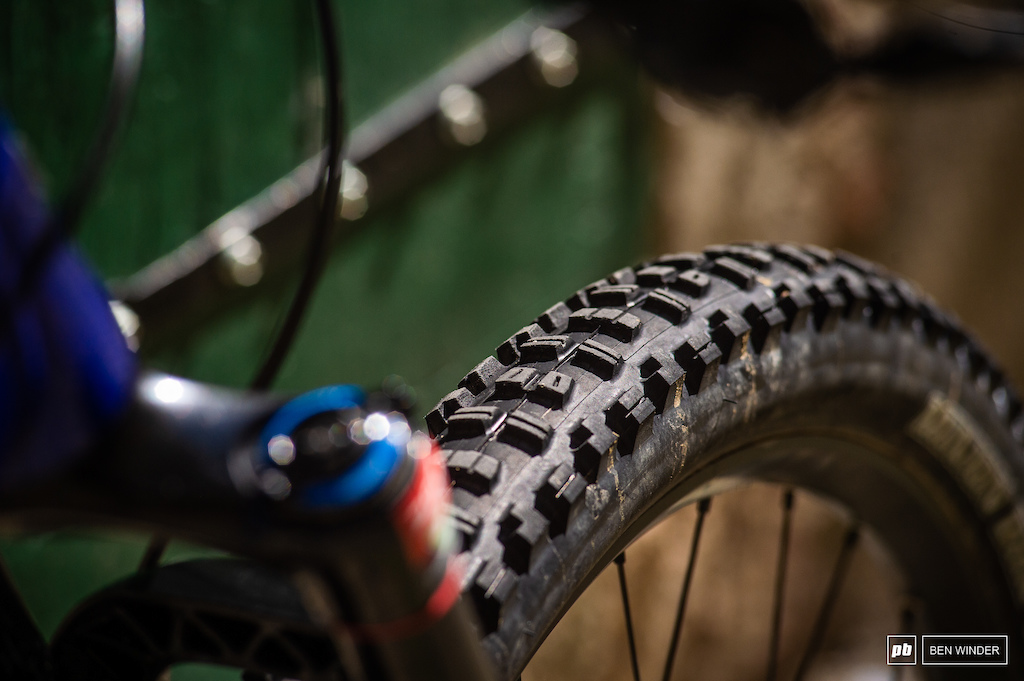 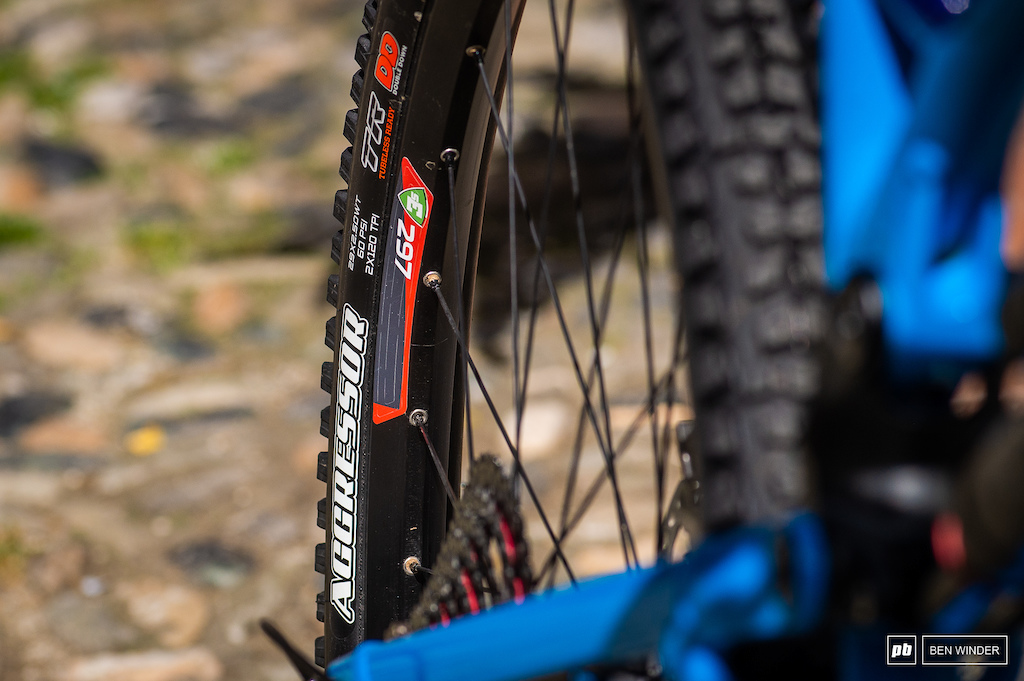 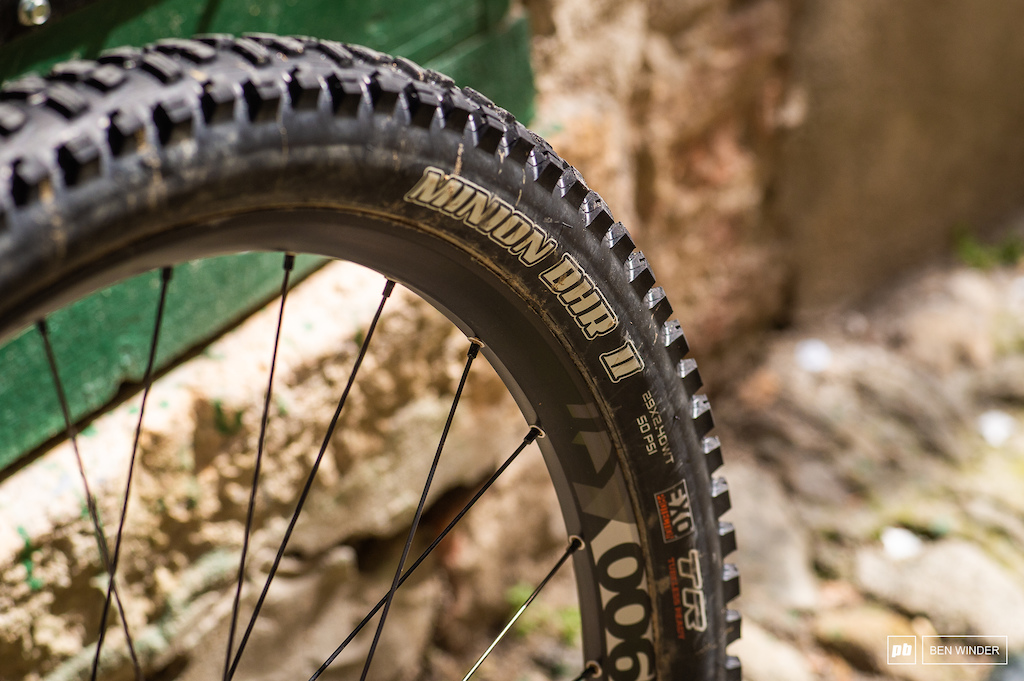 For tires, there's a DHR on the front because he thinks it rolls faster and the side knobs are the same as the DHF. There's an EXO casing to save some weight. On the back, he has the Aggressor. Palomba likes its grip in all conditions from dusty to wet. In Finale, there are a lot of rocks so he's using a Double Down casing on that tire. It gives a little more protection for the rear wheel and it holds its shape a little bit better than the EXO casing. There's also a Huck Norris tire insert in the back to help with holding the shape. 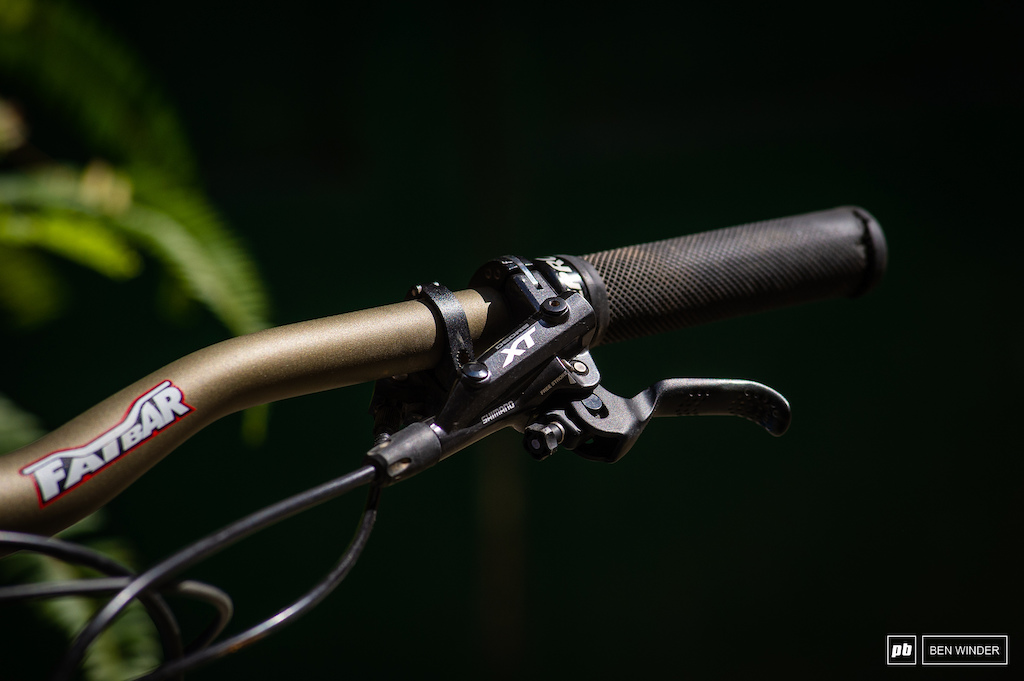 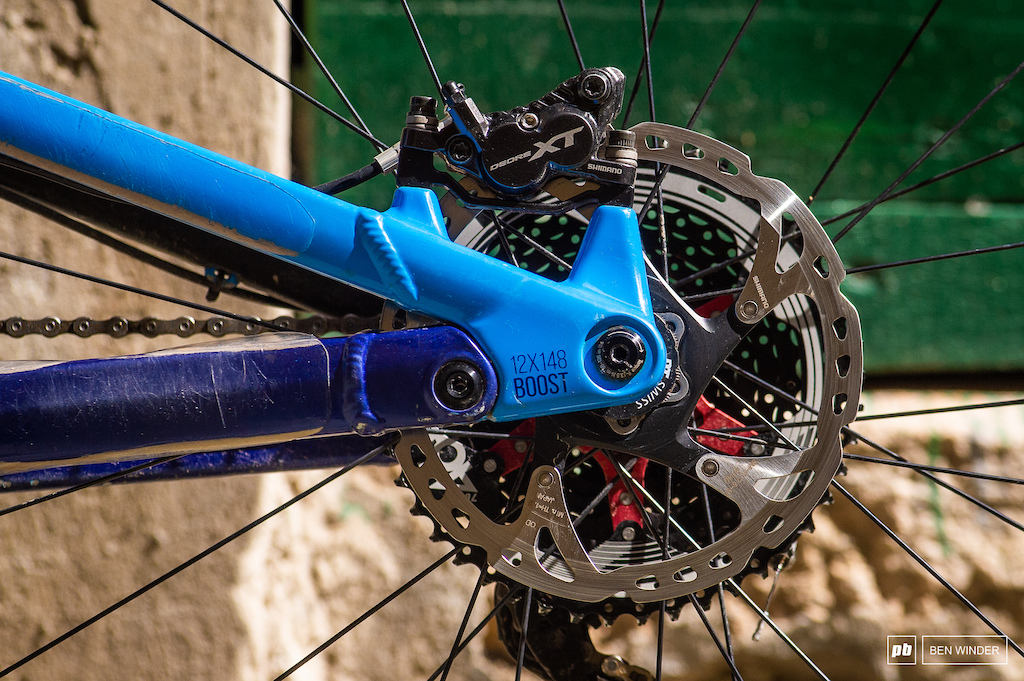 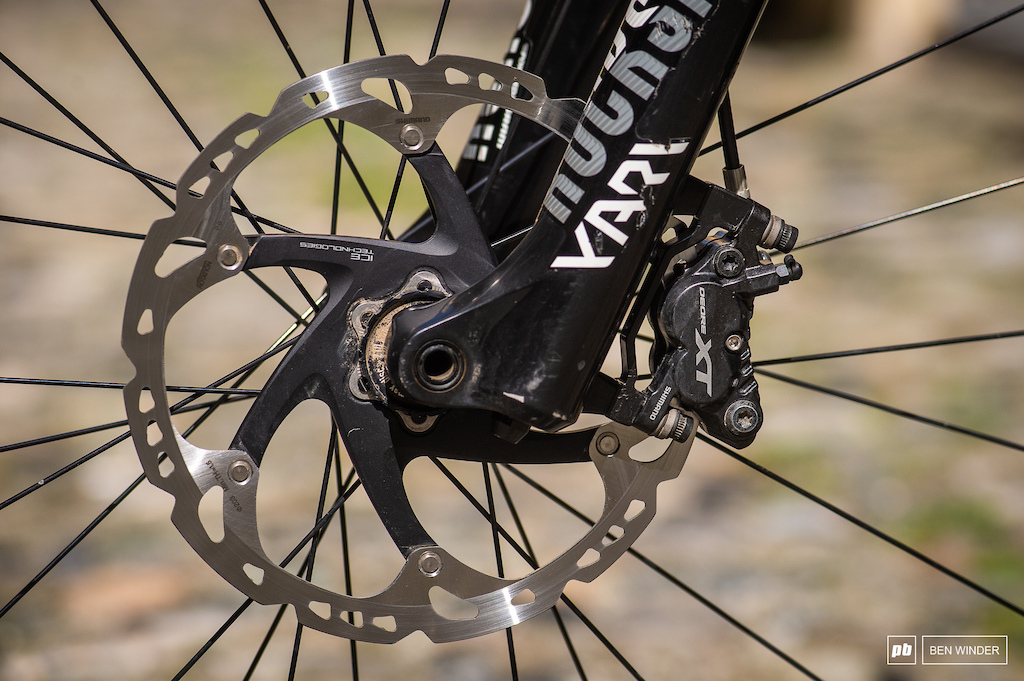 Shimano's XT M8020 four-piston brakes are taking care of stopping duties. Palomba has used the two-piston version before but didn't feel they had enough power, especially with 29" wheels. 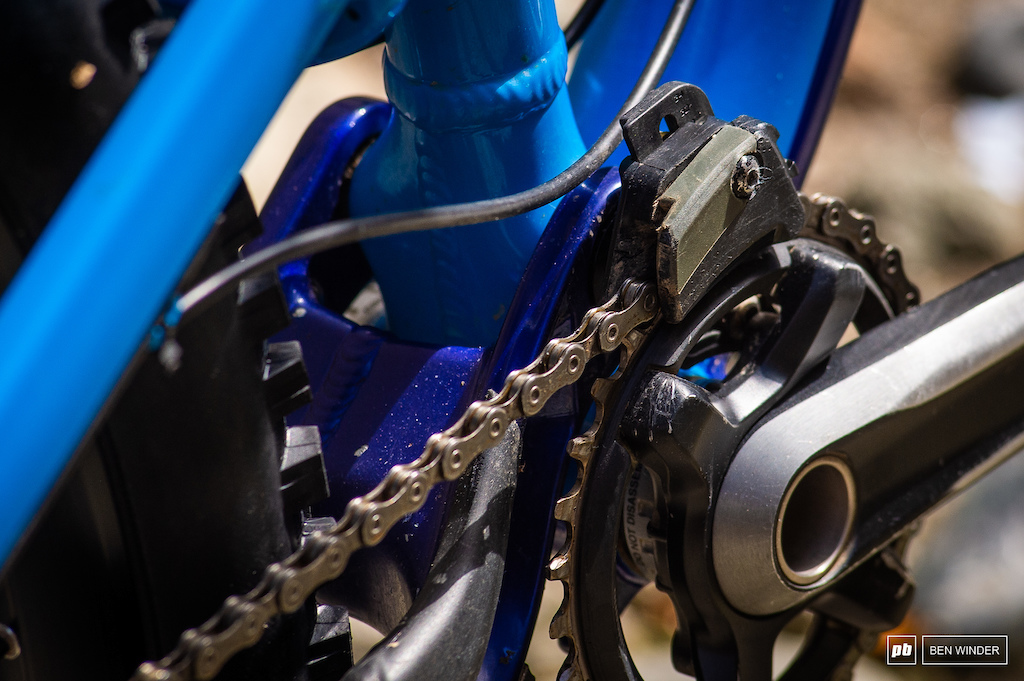 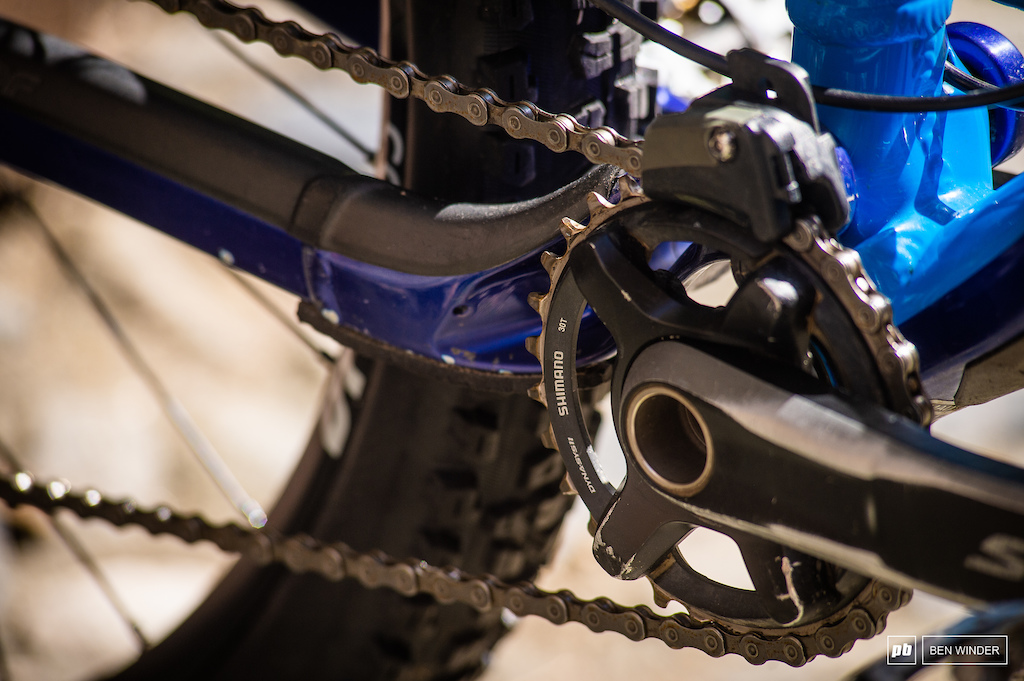 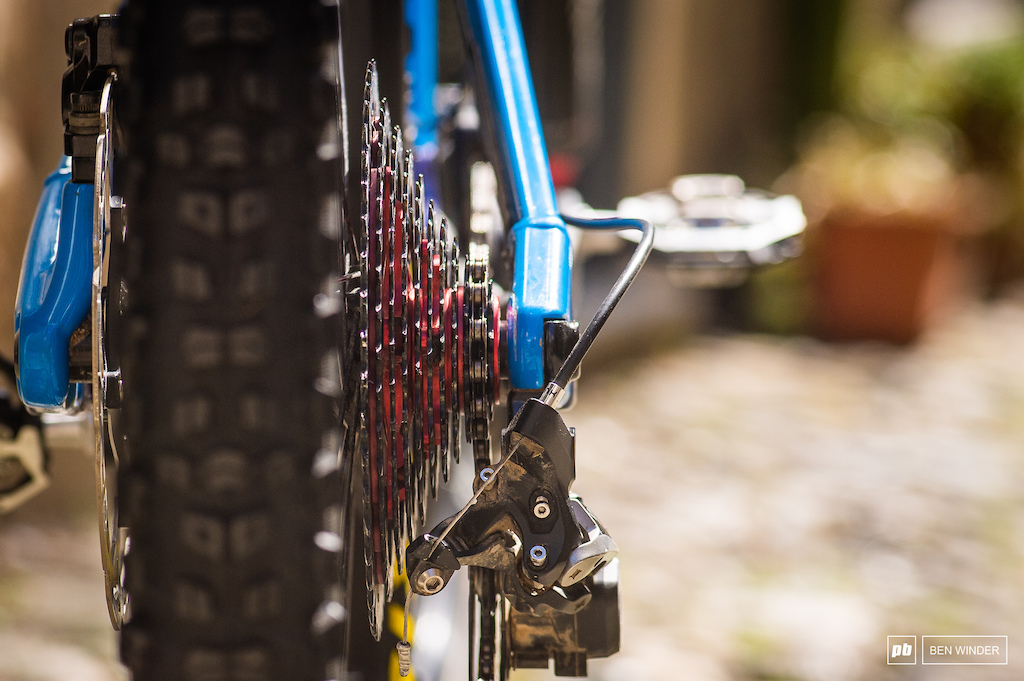 Most of the drivetrain is stock. There's a 30t ring on the front mated to an 11-46 cassette. 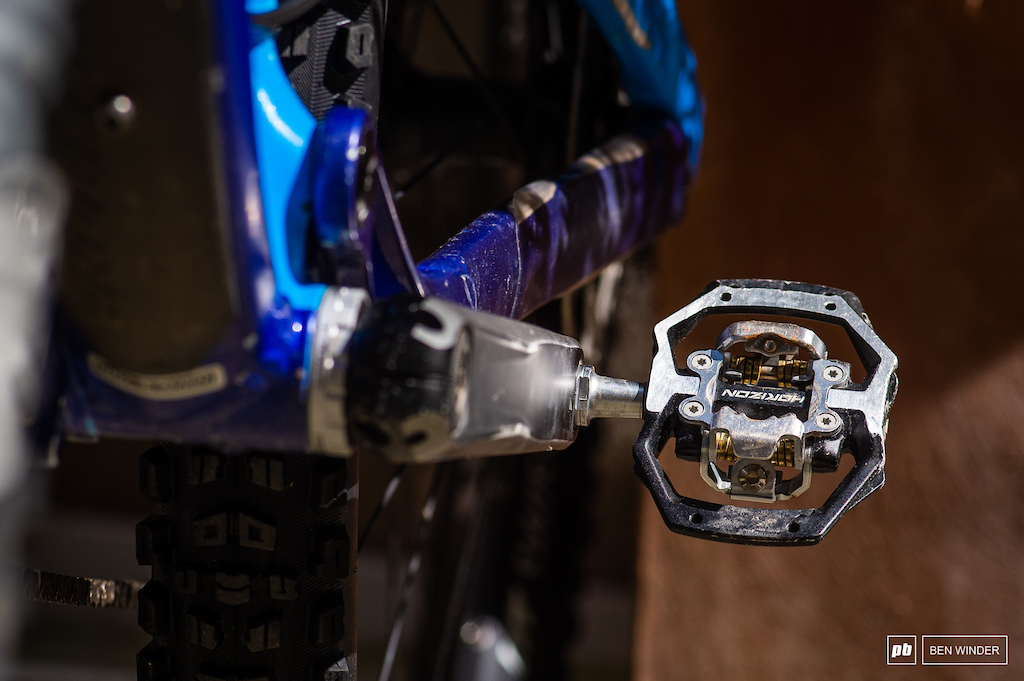 Pedals are Nukeproof Horizon, Palomba says "I ride in and I just clicked with these. I like the design and feel of them. They're also pretty cheap and I've not had any problems with them." 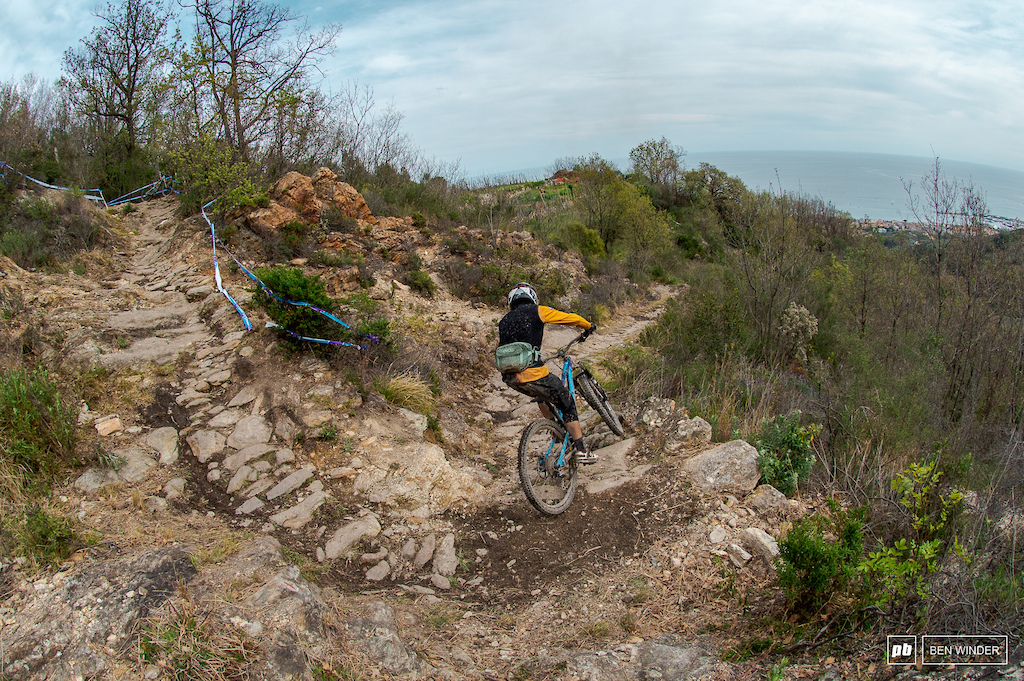 generationfourth (Apr 9, 2019 at 22:39)
Most sensible bike check ever. Buy something reasonable, keep it relatively stock, keep it clean and take care of it. Then go shred the shit outta it.

jaame (Apr 10, 2019 at 6:50)
@employee7: Me too, but cars are a bit different given most of the arts are bespoke. On bikes, they all have a SRAM or Shimano drivetrain. They all have Fox or RockShox forks. It's just not that interesting is it? I know everything has stabilised for the better, but reading "the xx1 gears were flawless" for the umpteenth time is a bit of a yawn fest, or at least it would be if I bothered to read it every time.

Konyp (Apr 10, 2019 at 7:47)
@employee7: Sure, but there is a place for everything. Its nice to look at some bling, but I will never buy a 5K bike to crash it into trees and have it squashed at the airport. I would like Pinkbike to help me make an informed purchase decision. Currently for this sort of thing I have to look to other sites.

SnowshoeRider4Life (Apr 10, 2019 at 9:01)
the DT Swiss e1900s are an underrated wheelset for their cost. mine are going into their 3rd year. just did bearings in the hubs yesterday for the first time

mtbikeaddict (Apr 10, 2019 at 10:35)
@employee7: Well yeah, but car mags have both... exotic hypercars to drool over, and a sensible civilian vehicles section to compare and make decisions. I'd like bike to be similar.

jaame (Apr 10, 2019 at 3:03)
Yeah exactly. I love XTR and I quite like XX1, but for the sake of variety it's nice that not every bike review has one or the other. I mean yes, pros use the best stuff, and bike companies all want PB to test the top spec bikes. It would be cool if you guys could turn this into a series, or a regular feature @pinkbike. Ride guides, high level amateur racers. People at the top end of the skills spectrum who buy their own bikes.

eurojuice (Apr 10, 2019 at 0:01)
That is pretty sweet to see an "authentic" bike check. Clearly he is focused on getting the best value, a good balance of cost and performance in this case. It sounds like he is a really capable rider and needs his equipment to simply work to support both his guiding and racing ambitions. More of these please.

Longroadtonowhere (Apr 10, 2019 at 0:14)
He was my guide when i was in finale last year. Super nice dude. All those guides talked a lot of shit on carbon bikes. Saying they wouldn’t last 2 months as a guide in finale.

chainspotting (Apr 9, 2019 at 23:44)
Similar kinda spec to what a lot of PBers will be riding I imagine. It's pretty cool to see how a rider can be sensible about component choices and race at a too level. It shows you how good nearly all MTB stuff is these days. Best of luck to you Igor

optimumnotmaximum (Apr 10, 2019 at 0:02)
The Aggressor ist one one the most underrated tires imo, especially in the DD version it is tough grips well damps well rolls well and is still sub 1kg in the 2.3 27.5 version. its my reartire on every bike i actually take to the woods.

SnowshoeRider4Life (Apr 10, 2019 at 8:59)
the aggressor is absolute shit unless you ride somewhere super dry rocky.

optimumnotmaximum (Apr 11, 2019 at 22:42)
@pdb18: since a few years it basically stopped raining here in the summer, so yes i use it mostly on dry trails ( with not much grip). I dont think it is bad in the wet either, in the mud- well the knobs are not very high. Funny how people complain about it not being a dh tire for wet conditions when in fact it is an enduro tire for mostly dry conditions.

Owosso (Apr 10, 2019 at 8:14)
I always admire "workhorse" bikes like this.
...Bikes and parts that are selected for their VALUE rather than being based on bike bro fashion. Deep down, it probably feels pretty cool for him to look at a race results and know that smoked a bunch of factory dudes on his scratched up aluminum whip with SLX crank arms. PROPS Igor!

here is a video, he is guiding the group. the rider behind the lense is a really fast and skilled german dh racer.
there is also part one on his channel.

smallsilences (Apr 10, 2019 at 2:23)
Love it. A solid blue-collar build with a focus on reliability, performance and durability. All the best Igor!

strawdog (Apr 10, 2019 at 3:02)
I can see his homemade chain guide is a 'quick release" clasp style trs guide with a screw through it to hold it together as its broken like mine and every other one i have seen out in the wild..highly like the worst mtb product ever produced.

DanielZed (Sep 2, 2019 at 5:03)
He is the best guide I had in Finale! Such a good rider and also very smart when choosing the trails. And nice build. Keep it simple and ride it like you stole it

SebastienGlineur (Apr 10, 2019 at 2:08)
Nice! a real bike check for the real people! Not expensive and stronger that's the real life not everyone have too much money for the expansive parts for his bike. I like and i want more similar bike check!

vtracer (Apr 11, 2019 at 8:01)
Does he have any custom tuning in his suspension? A yari with a custom damper tune would probably be 98% of the performance you could get out of any high end fork.

DavidGuerra (Apr 10, 2019 at 5:46)
Since he's not a large guy, maybe the wheels will hold up for a while. Also this article seems like paid advertising because that's basically the stock bike.