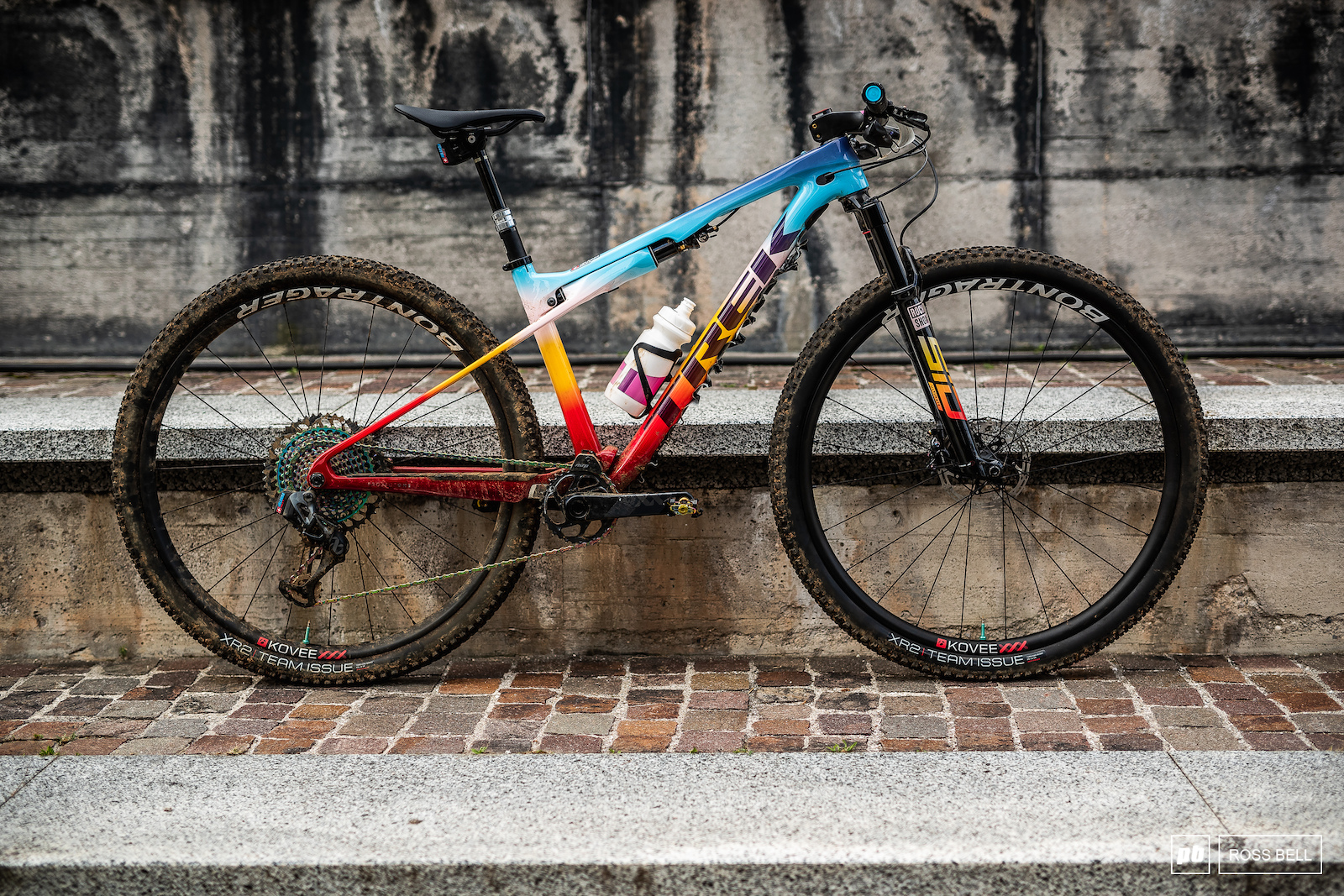 BIKE CHECK
Jolanda Neff's
Trek Supercaliber
Photography by Ross Bell
Anyone's story of winning the Olympics is bound to be a good one. After all, it is arguably the most prestigious achievement in all of mountain biking. That said, Jolanda Neff's victory in Tokyo last month was especially sweet, given that she's suffered from a string of setbacks that have kept her off the World Cup podium for some time now.

In late 2019, Neff crashed brutally while training and injured her spleen, collapsed a lung, and broke a rib. It was a long road to recovery. When normal World Cup racing resumed in 2021, it seemed as if Neff was climbing back up the results to once again contend for the win, but she crashed and broke her hand in Leogang, just six weeks out from the Olympics.

So, then, when she took the lead early in the Olympic XCO race and continued to lead until she had claimed gold as her own, it had been a long time coming. Let's take a look at the bike that carried her there. 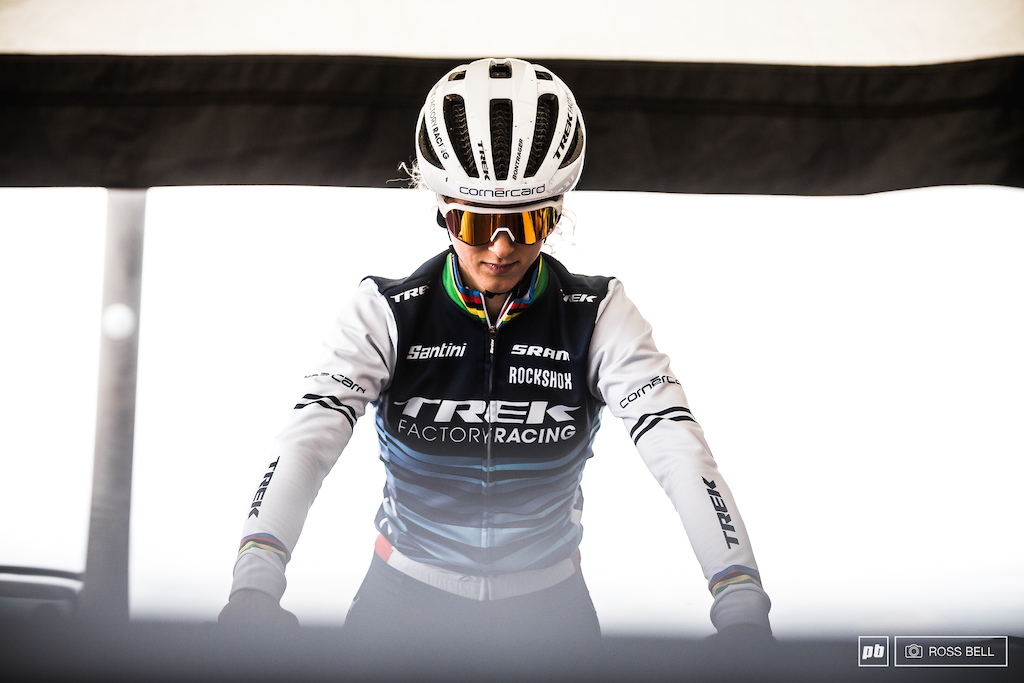 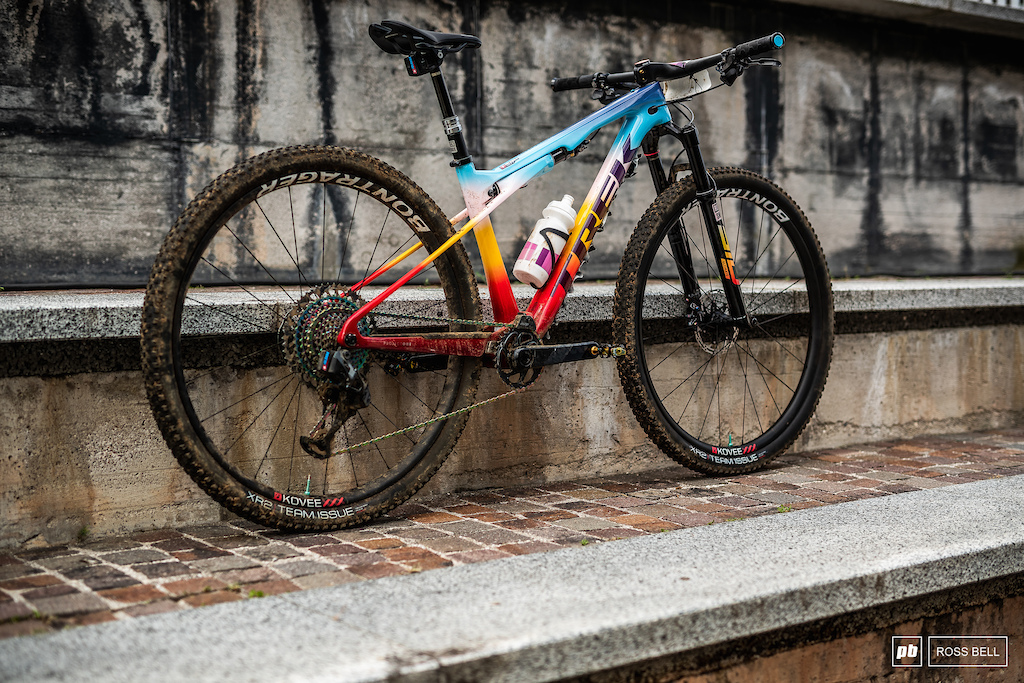 When photographed, the bike still had Tokyo mud on it. 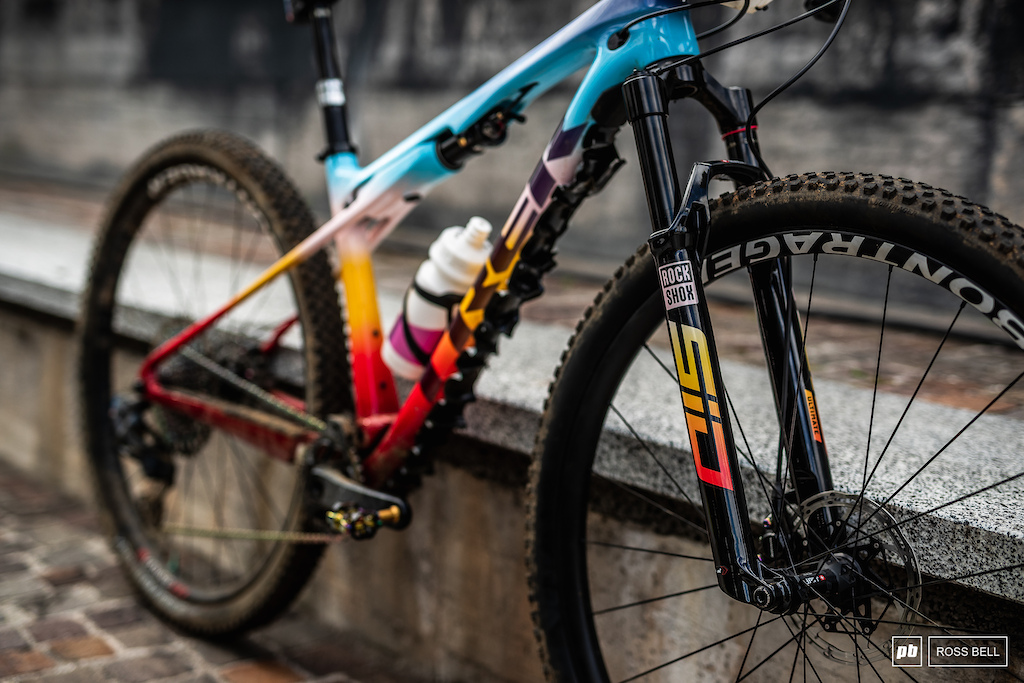 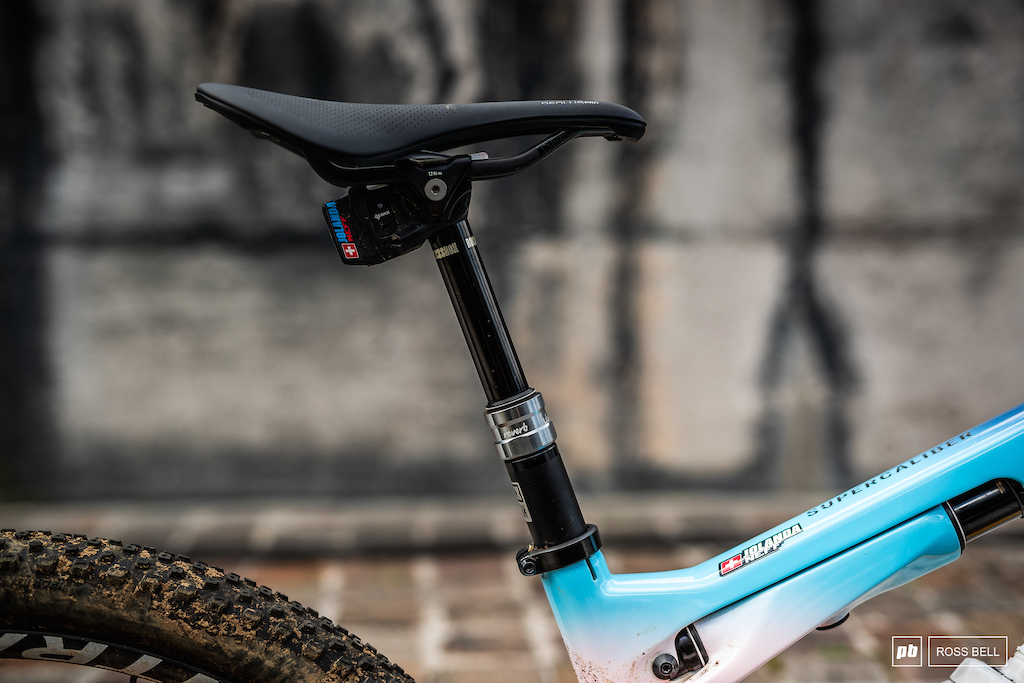 Dropper post, always. While many of her fellow cross country racers still eschew dropper posts, Neff started riding with one years ago and won't go back. 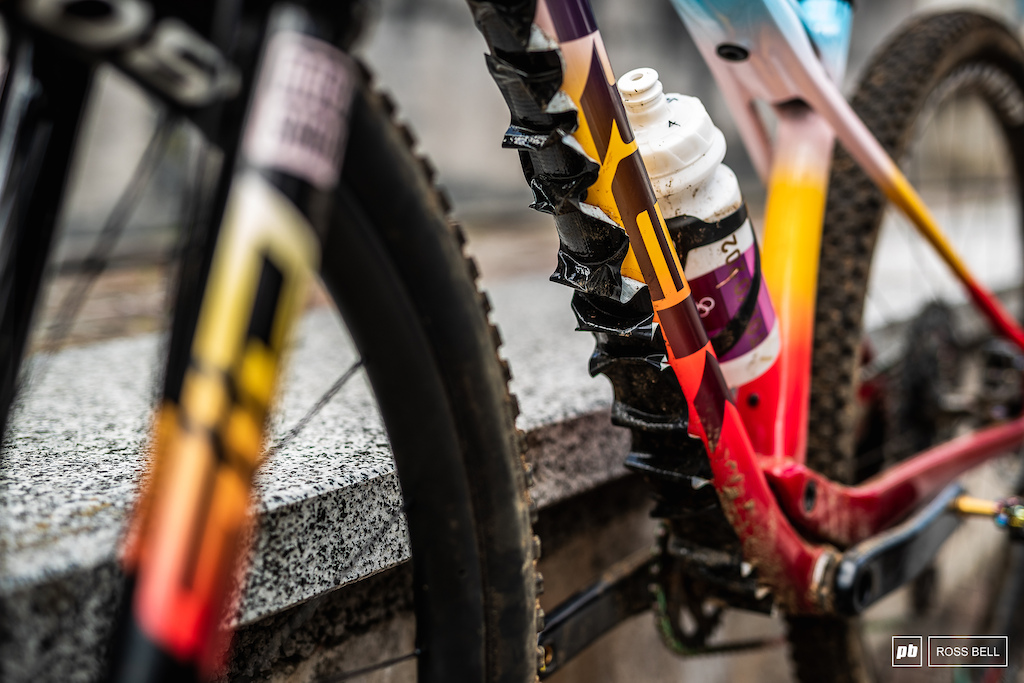 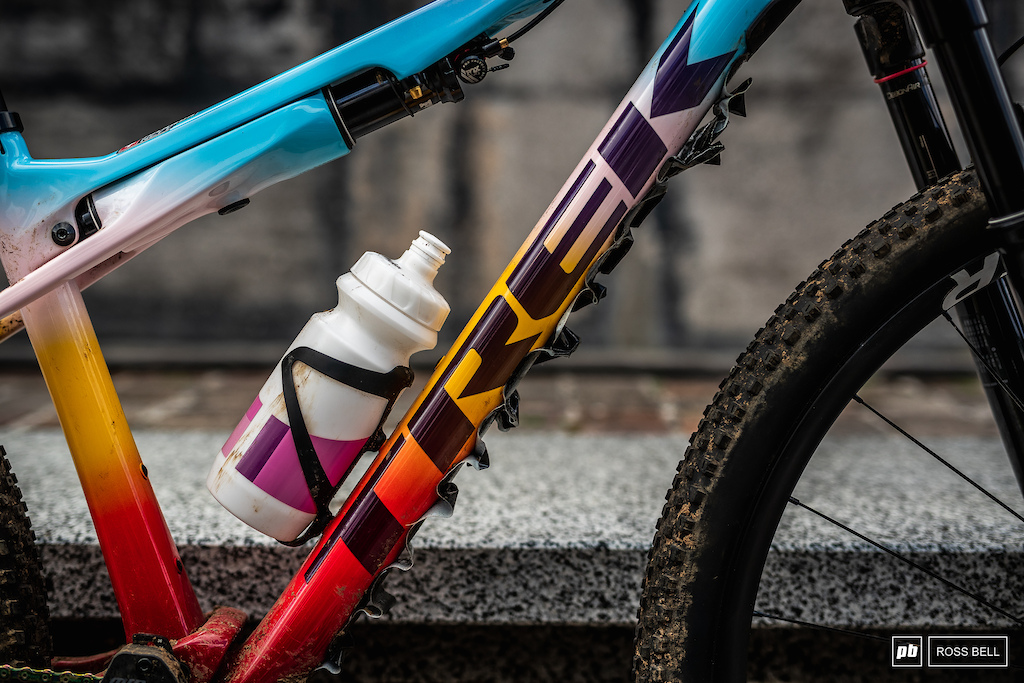 Many speculated about the wavy tape on Neff's downtube at the Olympics. The idea is to make it more difficult for mud to stick to the frame, but in the event that mud does collect on the tape, pulling the tape off the bike would be an easy way to cut the bike's weight back down, even mid-race. 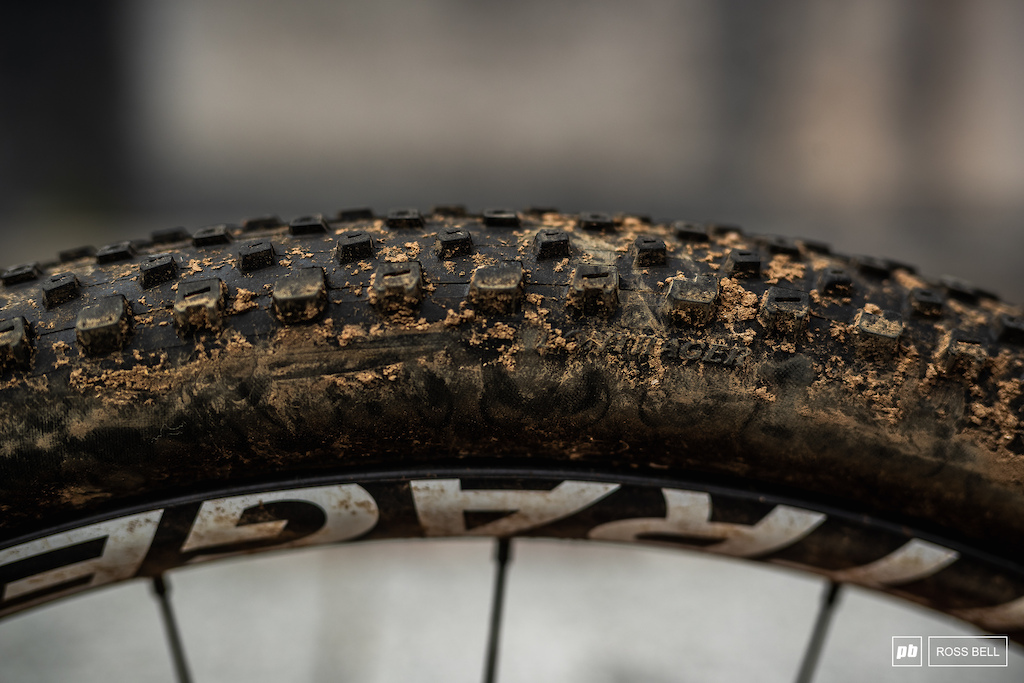 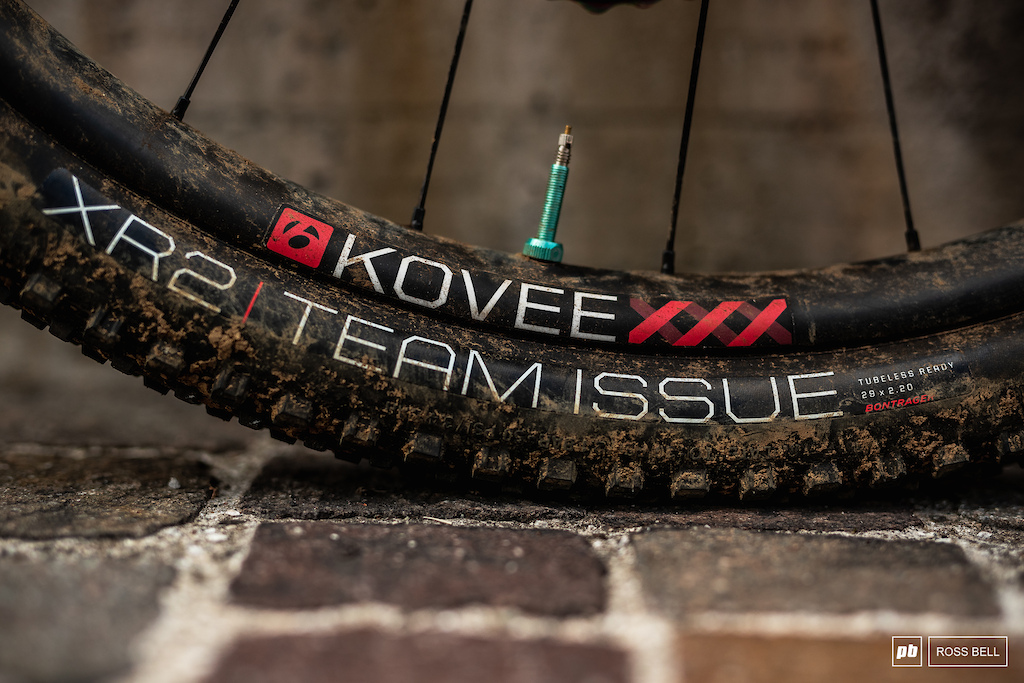 Neff typically runs Bontrager's XR1 or XR3 tires in dry conditions, but opted for the more robust XR2 set because of Tokyo's mud. 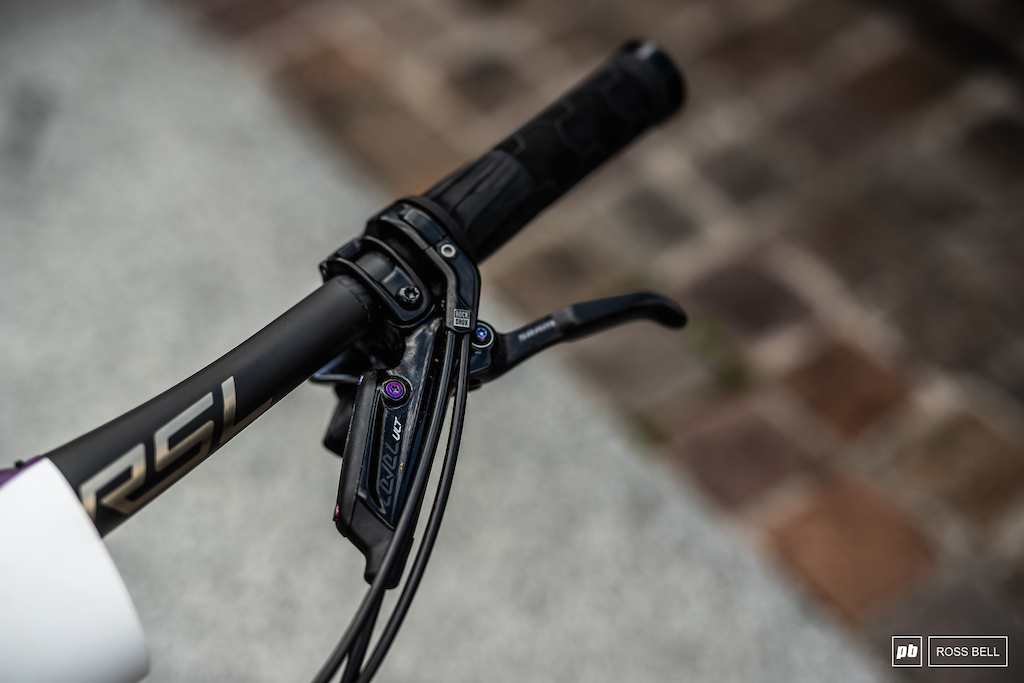 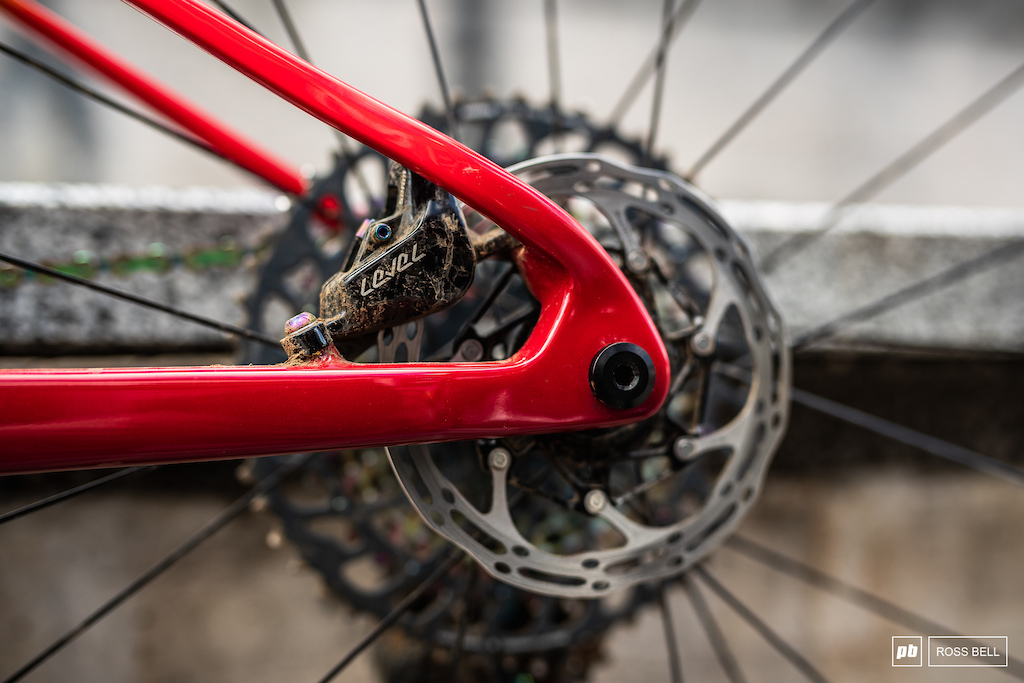 Neff's Level Ultimate brakes have titanium bolts to help shave a bit of extra weight. The front and rear suspension locks out with RockShox's TwistLoc system, and Trek designed the Supercaliber to ride more like a hardtail than a locked out full suspension bike when the IsoStrut is locked. 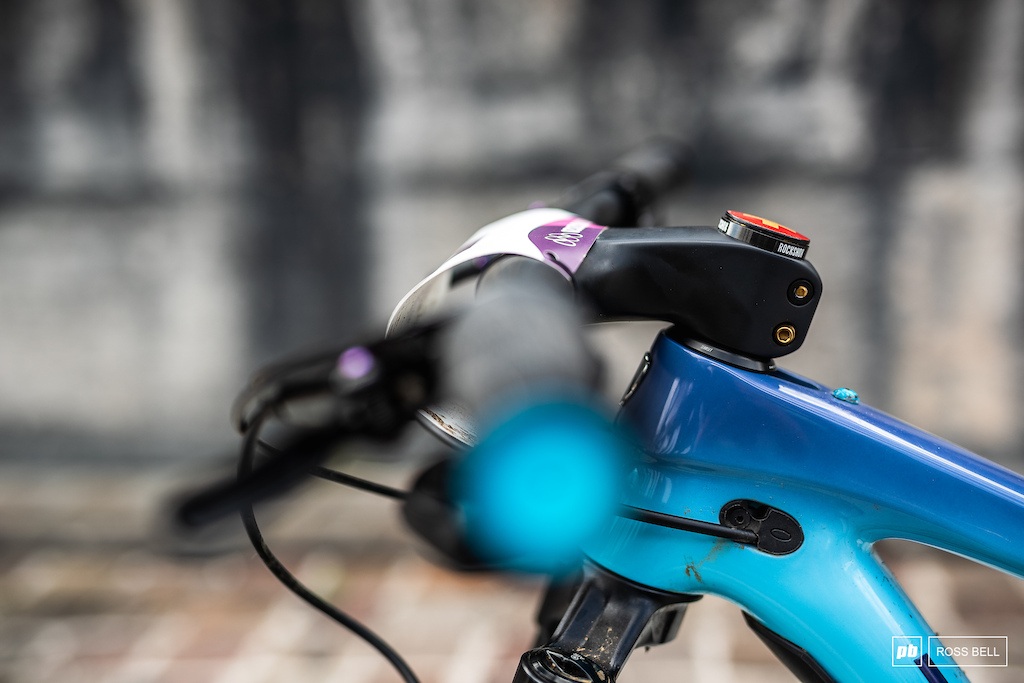 Neff has said in the past that she is quite particular about her setup and likes to keep things extremely consistent when she moves from bike to bike. Although she just recently started running Bontrager's new RSL integrated cockpit, the measurements are the same as what she's run for a while. 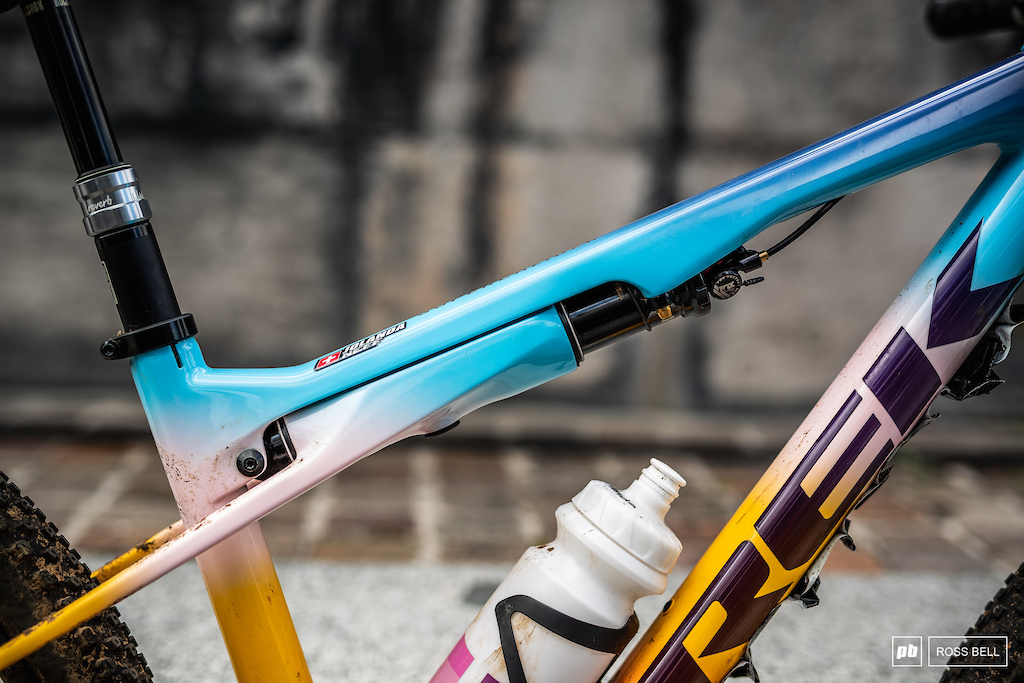 The Supercaliber's IsoStrut serves as a structural part of the frame and was designed in collaboration with Fox. Unlike most rear shocks, it isn't driven by a linkage. The seatstays are pivotless and flex to move with the suspension. 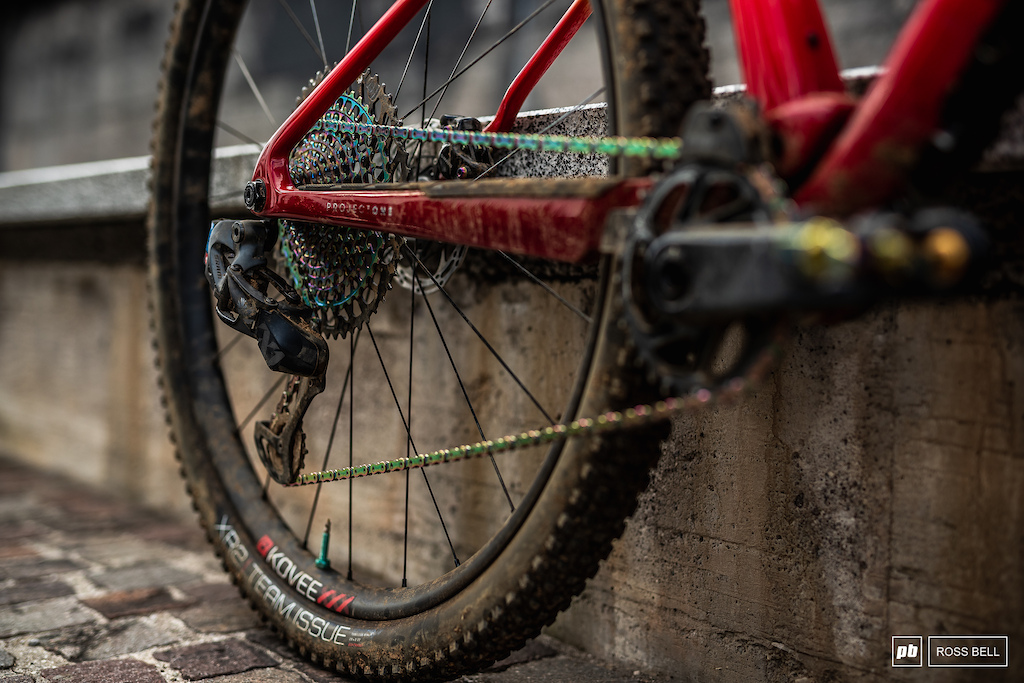 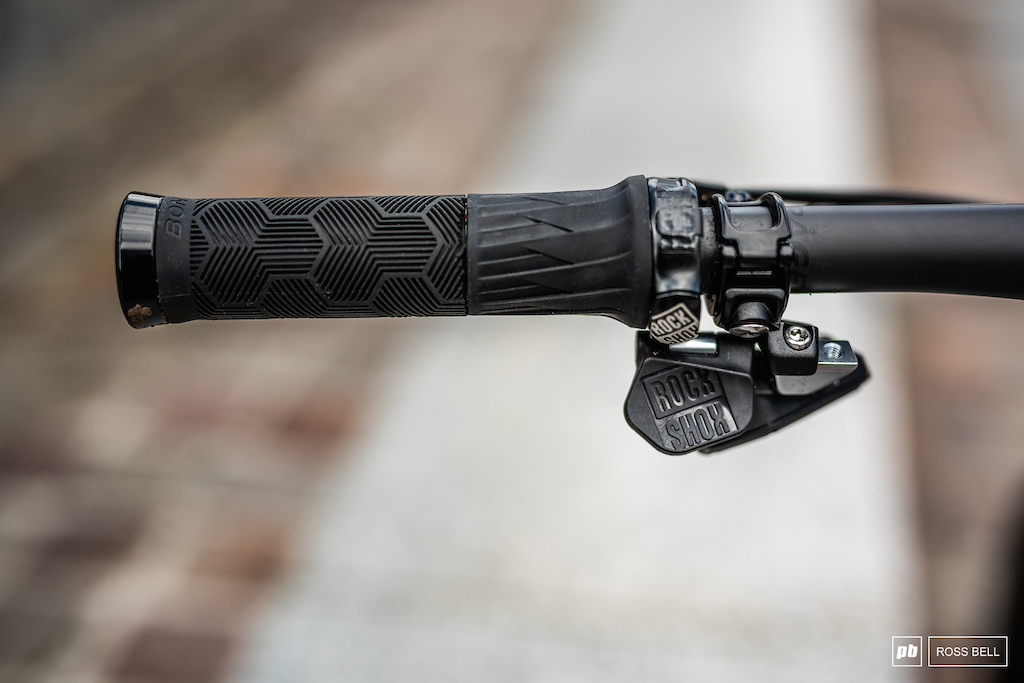 Neff runs a 32t chainring and 10-52t cassette with her Eagle XX1 AXS setup, though she changes the chainring size depending on the course, especially between short, flat XCC and long, steep XCO races. 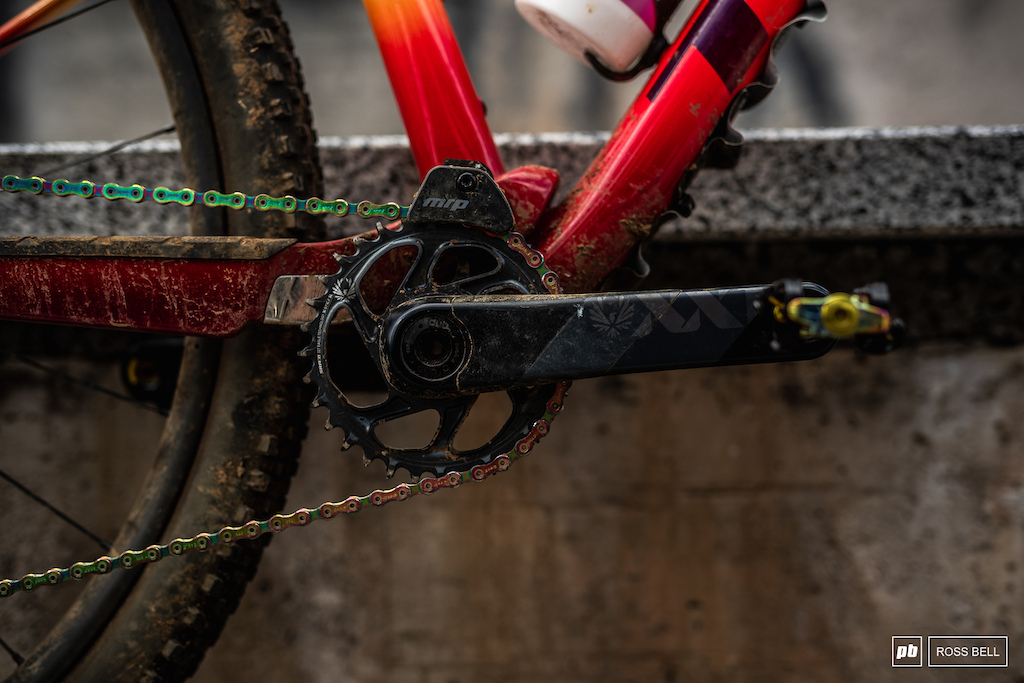 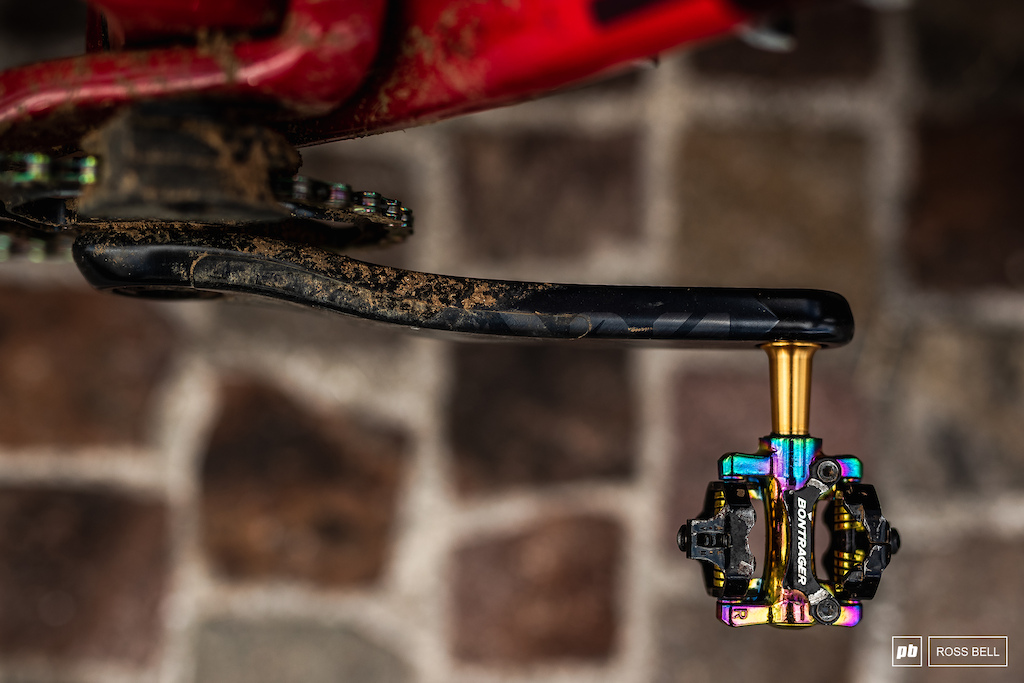 An MRP chainguide and Bontrager titanium pedals finish it off. 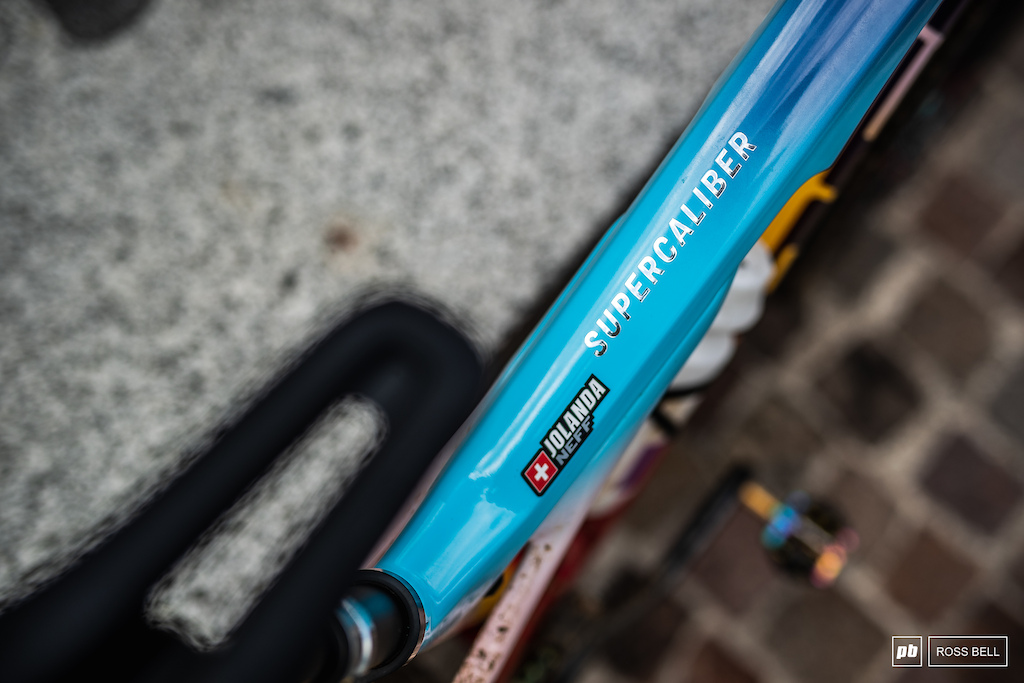 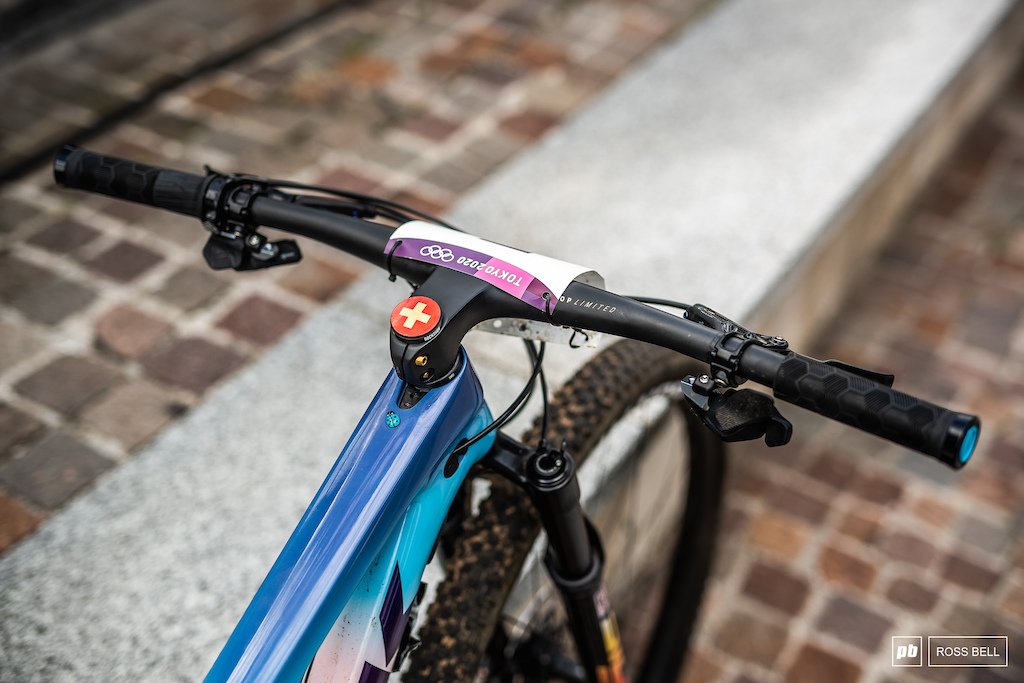 Some personal touches, of course. It's only fitting for the rider who is now the Olympic champion. 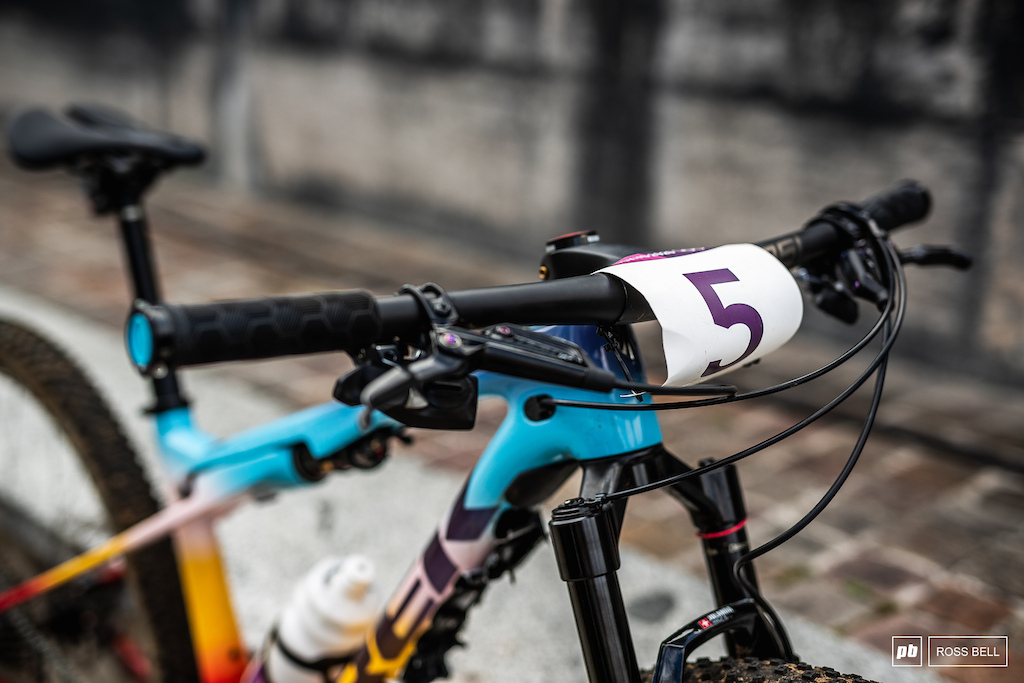 Now the Olympic champion, Neff may be able to brush off her slump of the past year and climb back up onto the podium at World Champs this weekend.

KJP1230 (Aug 27, 2021 at 12:22)
I've been running the rotor reverse mullet for a long time, and I love it. 220mm rear, 200mm front. I get that we're all supposed to be using our brakes more evenly, and I completely agree that when descending the front wheel will offer a tremendous amount of braking power. That said, we largely use the rear brake to control speed throughout a longer descent - and no one wants to risk an OTB crash by locking up the front wheel.

jclnv (Aug 27, 2021 at 9:43) (Below Threshold)
I disagree. They’re not supposed to be very light, there isn’t enough travel, and the HA is too steep. Imagine her riding that Spark. It would be hilarious to watch her go even faster than everyone else on the downs.

The SuperCaliber was a cool idea—trying to bridge the gap between an XC FS bike and hardtail—but in the end, they didn't achieve a weight advantage over the top FS competitors, so that kinda negates its purpose.

Compared to most XC bikes from a few years ago, I'm sure the SuperCaliber still rides great—and it obviously isn't holding Jolanda back—but it's hard to argue that it's a better bike than a Spark or Epic.

nattyd (Aug 27, 2021 at 12:45)
@jclnv: Loving all the confident commentators who have clearly never watched an XCO race. TBH, the captions seem like they were written by someone who only has a passing familiarity.

Hence stuff like "While many of her fellow cross country racers still eschew dropper posts"...

Probably 95+% of women run dropper posts in XCO at this point. It's basically Loana and a few others without one.

You should try actually reading the comments before you respond.


Pretty ironic accusation since a completely different person made the 3 lbs comment, and was saying the Spark was 3 lbs heavier than the Trek, not the other way around.

TheR (Aug 27, 2021 at 8:51)
Whatever bike she was on, you could tell she had “it” that day. You know those rides where you just feel great — strong and solid, and nothing can stop you? That was Jolanda Neff that day. You could just see it in how she was riding. It was an absolute clinic. As close to a perfect race as you will see.

keeferm (Aug 27, 2021 at 4:31)
Last year I was reading a few internet articles (opinions) on how it is actually a better setup to run them reverse from conventional thinking. The idea of larger on the front comes from moto and the weight distribution isn't the same as a MTB... I haven't tried it yet but it was interesting. I'm still running the same front and back.

jeremy3220 (Aug 27, 2021 at 8:26)
@keeferm: That's for gravity riding where heat management is a big priority. That's generally not an issue in XC racing where you're not going to be on the rear brake for long periods. For general trail riding I'd recommend same sizes rotors but if you're racing XC or have really flat terrain a bigger front rotor makes sense. If you're racing DH then either equal size rotors or larger in the rear.

jeremy3220 (Aug 27, 2021 at 8:29)
@pink505: you're misinterpreting the physics and internet here. There are practically no DH racers running larger front rotors and those articles are referring to DH/gravity riding.

pink505 (Aug 27, 2021 at 12:45)
@jeremy3220 You might be right about me not getting the internet...On the physics side If I raced DH at all or had any real brake system design experience I would argue with you. I'll go poke some anti-vaccers, flat earthers and comment on dentists bike choices instead.

iwantyourdemo (Aug 27, 2021 at 17:31)
@jeremy3220: I read that, it seems like he found “most” riders just have improper braking technique. So swapping the rotors would just be coddling bad form?

jeremy3220 (Aug 27, 2021 at 18:09)
@iwantyourdemo: he found that even pros use the rear brake more often. He talks about this in one of his videos. Pro DH racers have already figured this out though and thats why they either run same size rotors or a larger rear rotor (Brosnan, Nicole).

nattyd (Aug 27, 2021 at 11:27)
@seraph: Go watch some XCO World Cup races. They often have a camera running alongside the riders on steep climbs showing them in the low gear. These courses often have 20%+ climbs, so even top riders use low gears. If 32 x 52 is too low, she'll probably move to a bigger chainring.

nattyd (Aug 27, 2021 at 9:31)
"While many of her fellow cross country racers still eschew dropper posts, Neff started riding with one years ago and won't go back."

The vast majority of the women's field is on droppers. There are a few notable exceptions like Loana Lecomte, but it's pretty rare.

One person's 'slump' is another's 'recovery from being stabbed in the spleen'.

Language is important. You make it sounds like she was in inexplicably bad form.

aljoburr (Aug 27, 2021 at 3:55)
Tape on downtube to stop mud sticking to frame, but what ever as fast enough to win, which is what is important!

vinay (Aug 27, 2021 at 10:43)
I hope it doesn't catch on. We finally see people move away from polluting the trails with google tear-offs, don't fancy seeing this mess on the trails. Can't people just accept that if the trail is muddy you'll end up with mud on your bike? If you don't want that then just stay on the road.