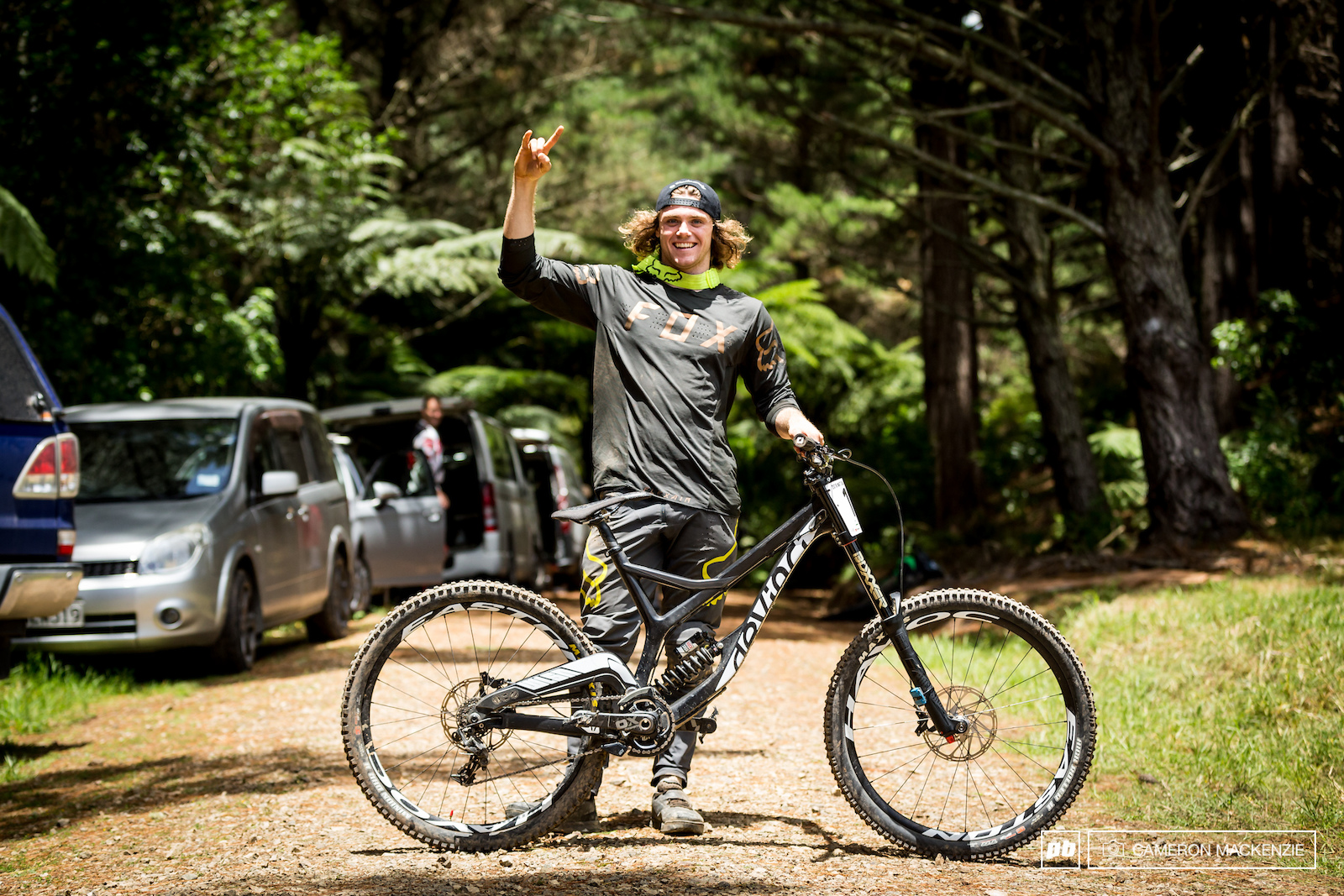 Keegan Wright's carbon Devinci Wilson
Keegan Wright is the latest in a long line of fast Kiwis to sign a factory ride contract. While Keegan's main focus is towards enduro nowadays, he'll be racing some DH as well and we took the opportunity to take a look at his downhill rig. At this stage, Keegan is riding directly for Devinci Cycles, but our understanding is that an official Devinci Enduro / Downhill team announcement is coming soon.

Keegan is a typical laid back Kiwi bloke, and his knowledge and care for the finer details and setup of his carbon fibre Devinci Wilson is relaxed, to say the least. Rather than fiddling around with it too much, he just gets out there and rides, a lot. 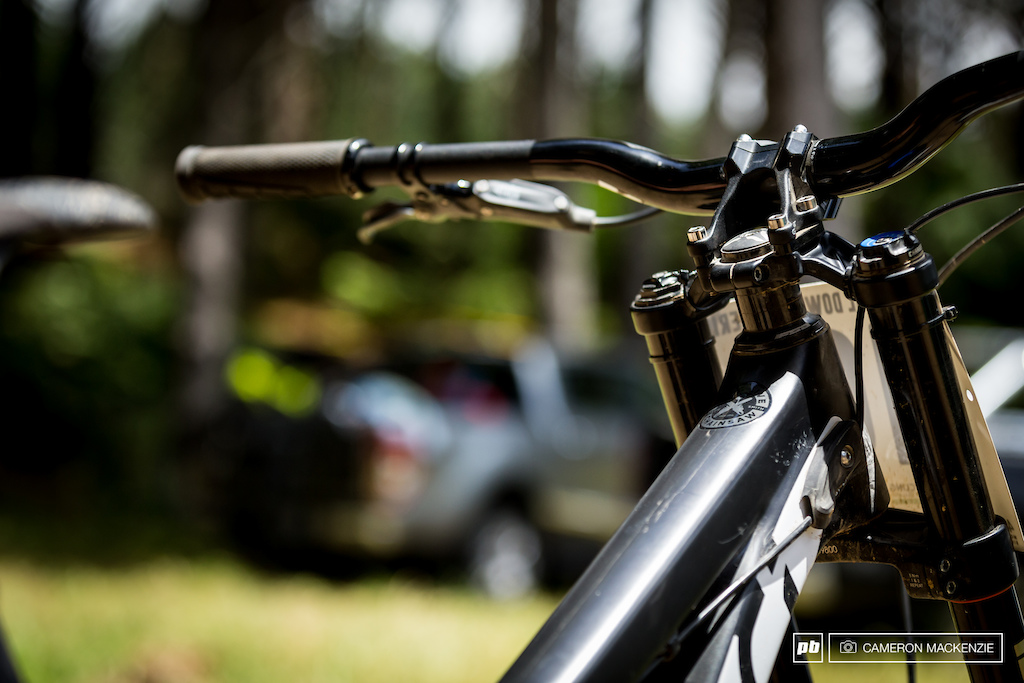 Keegan was quick to point out his high stack height on his Wilson. "What we have is 35mm of spacers under the upper crown and a 5mm stem spacer paired to a 25mm rise FSA Gradient handlebar. "For me, I prefer the abnormally high front end. It suits my riding still and that's what I'm used to."
For now, Keegan is riding aboard their largest sized frame available, an X-Large. The bike does look visible small beneath him, but this isn't much of a bother for him. With roots deep in BMX racing, a compact chassis is something he is accustomed to. However, in much fewer words, Keegs did indicate that he will look to size up a frame when something new is available. What and when that will be something, we will all have to wait and see. 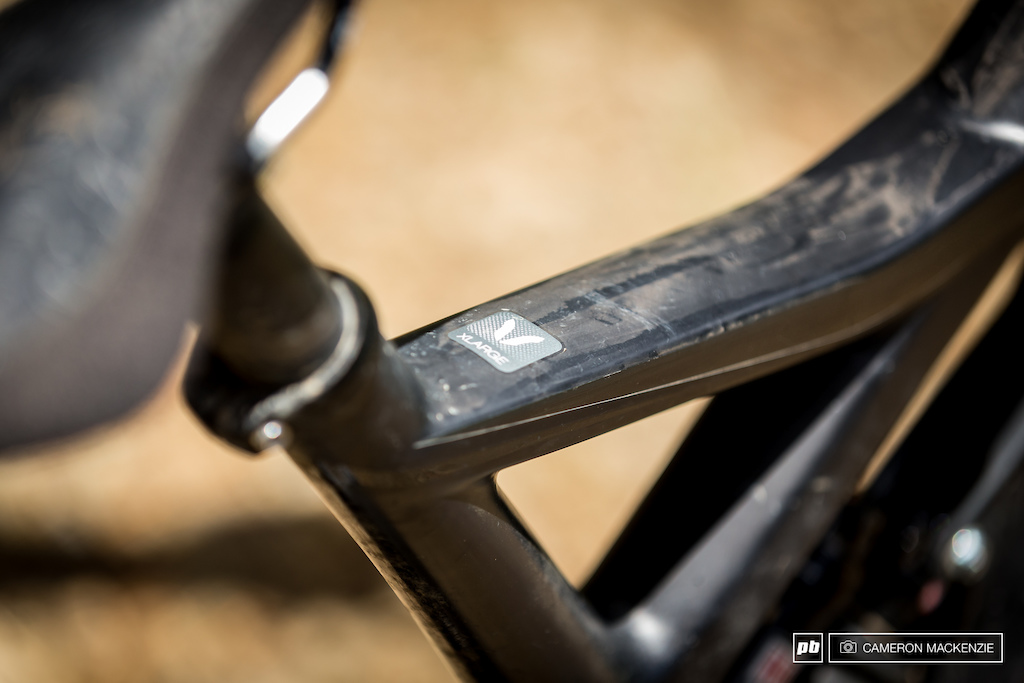 In relation to the suspension and other componentry, Keegans' Wilson is stock. You can buy the same Carbon framed model now equipped with the gear, excluding his FSA bar and stem. 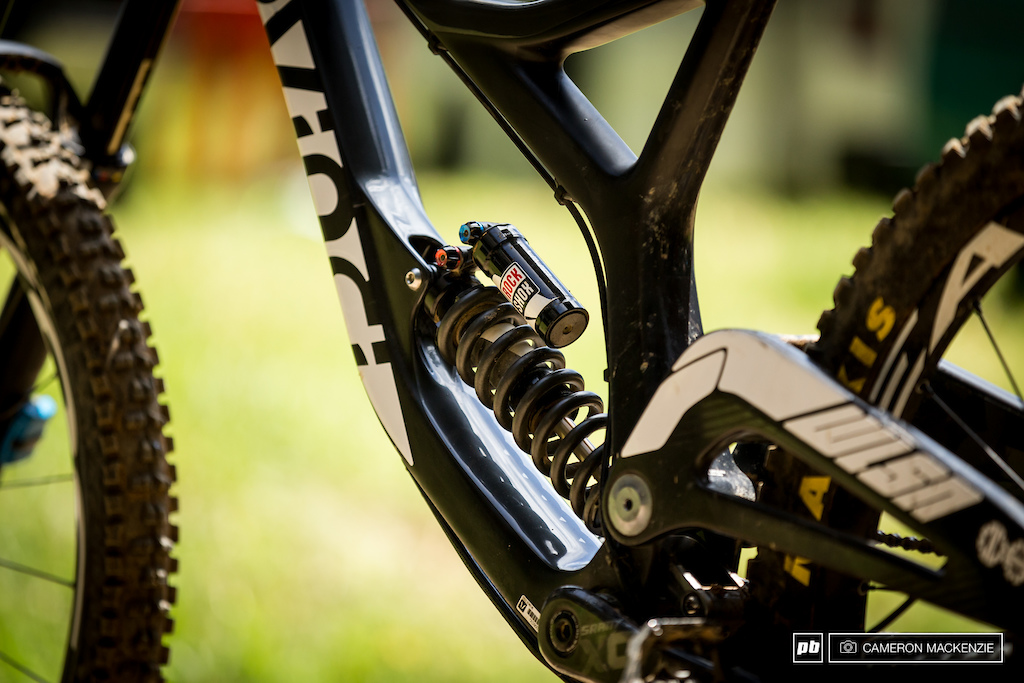 • RockShox Boxxer World Cup
• Pressure: Unknown - Going by feel, I would guess it to be around 80-85PSI
• Tokens: Whatever came stock in it
• Compression: Wound all the way in
• Rebound: 7 clicks from fully open 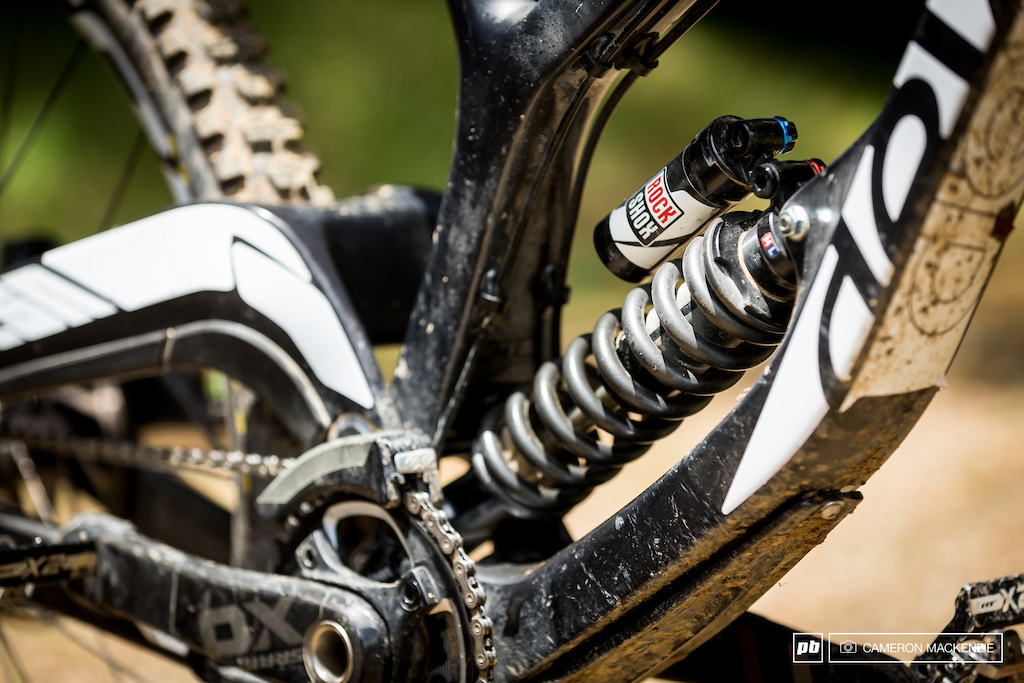 For as long as I have known Keegan, he has always been one to run incredible fast rebound, both front and rear. This comes from when he used to ride Marzocchi suspension and worked closely on suspension tuning with Pedro. It's now the norm for Keegan, and seem to work well for him. 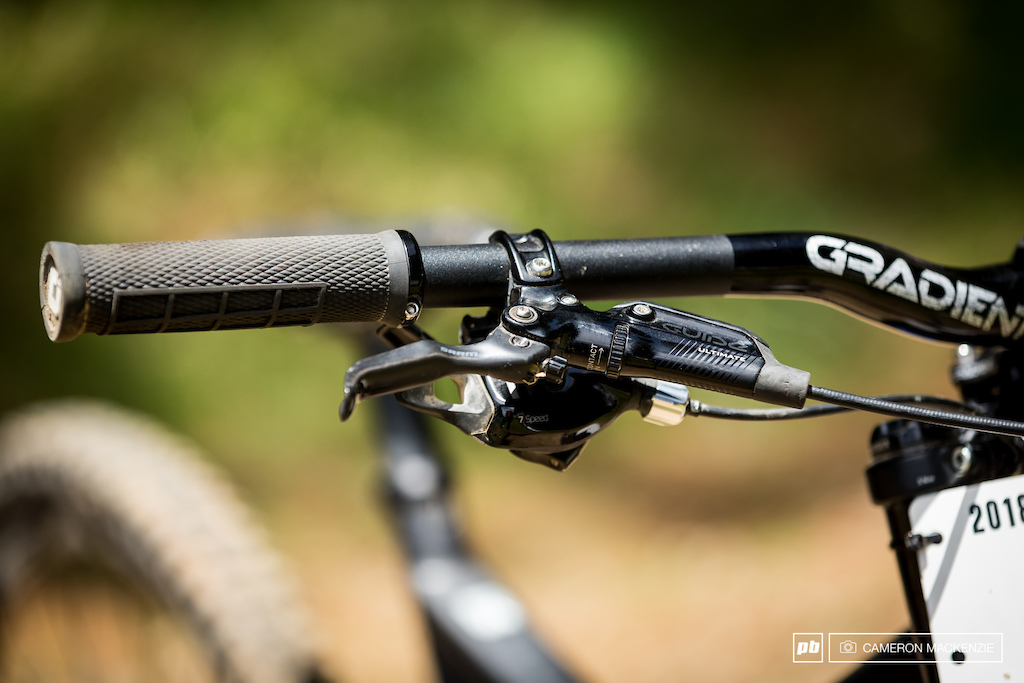 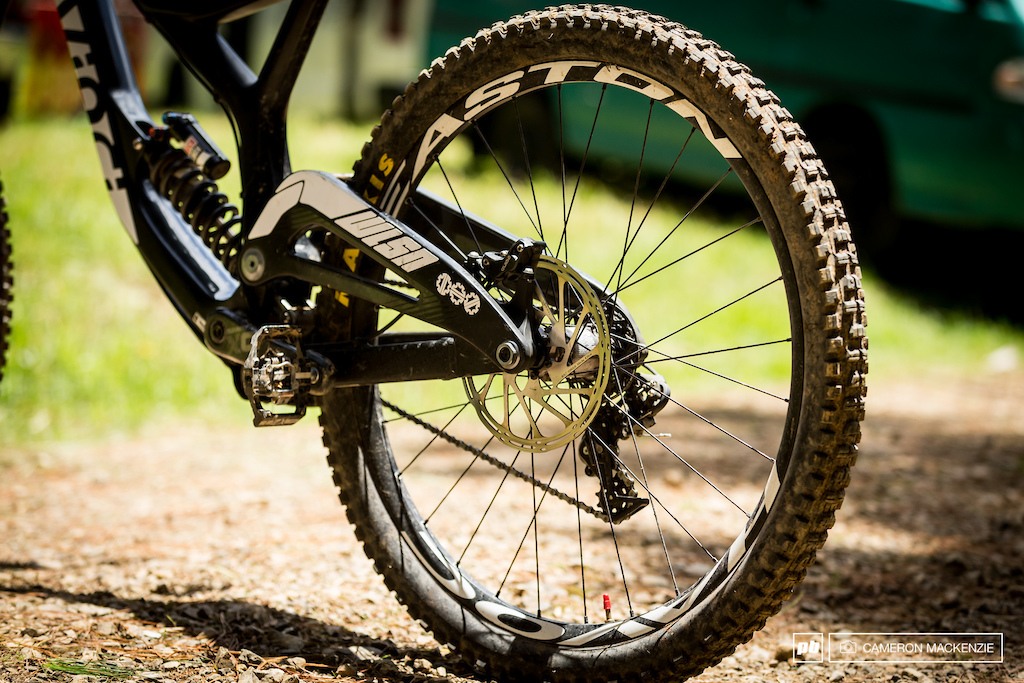 • F: Maxxis High Roller II - DH Casing - 27.5x2.5
• R: Maxxis Minion DHR II - DH Casing
• Front: 19PSi
• Rear: 28PSI
• Tubeless
•Paired with Easton Havoc Wheels
Although the race today at Fourforty MTB Park presents a lot of wet and greasy terrain, Keegan opted to leave on the same dry tyres he has been rolling in the Rotorua dust for the last month. He reasons that "it's a pretty low-key event, so I don't see the need to worry about changing tyres and riddling with pressures." 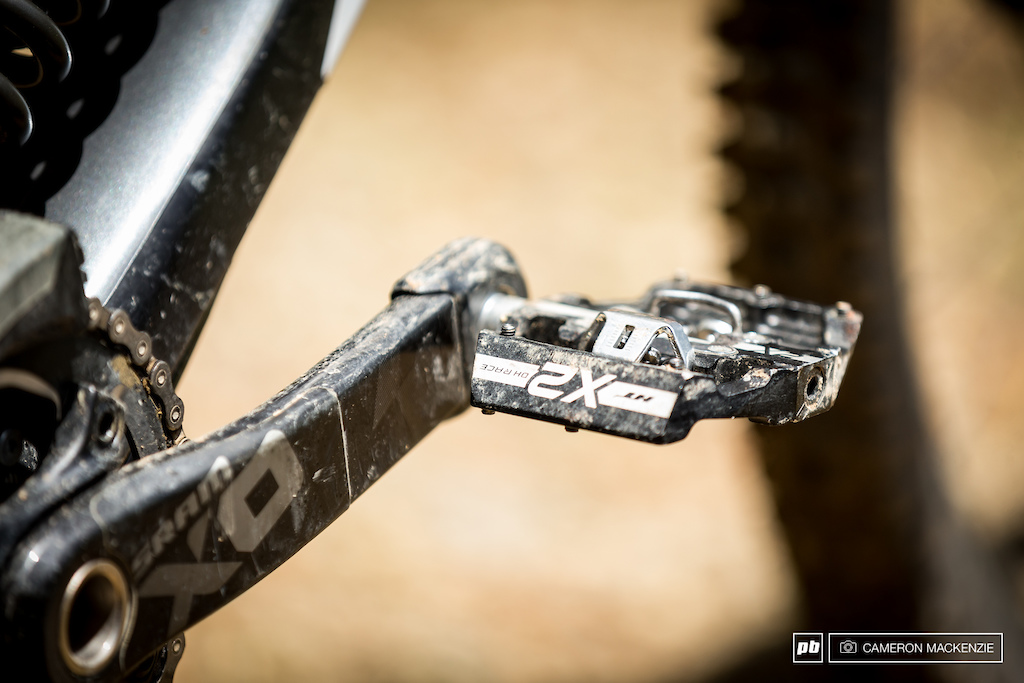 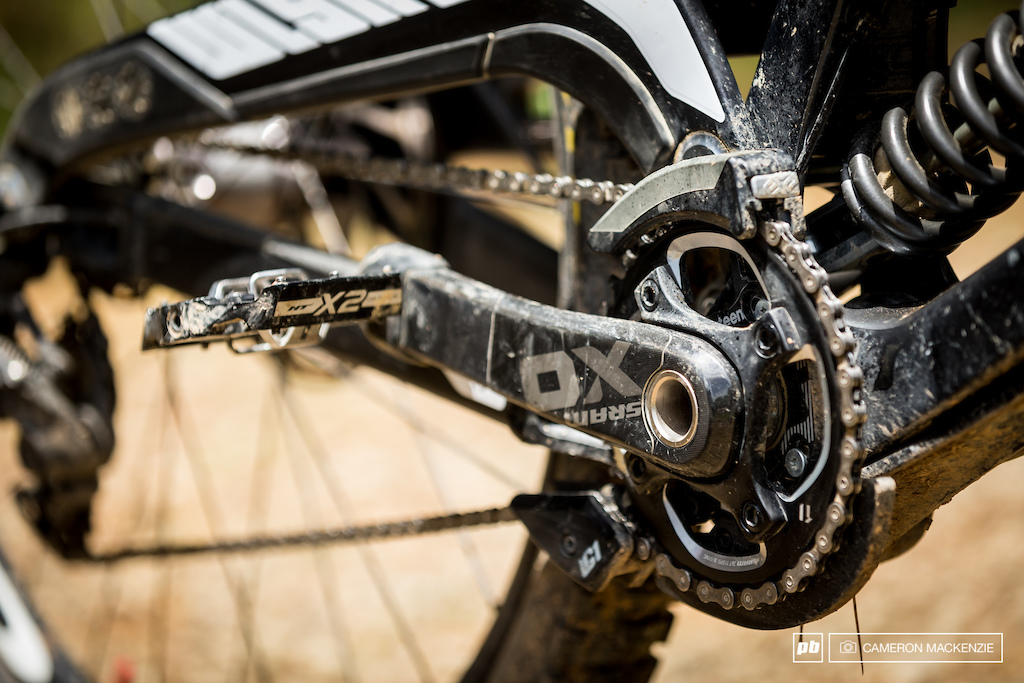 SRAM XO1 DH Groupset
Keegan's season is shaping up to be another gangbusters trip around the world. He is going to be racing all the EWS Rounds, select Downhill World Cups, select Crankworx stops and whatever else takes his fancy in between.

Sshredder (Jan 7, 2018 at 10:08)
Keegan sets up his bike the way that works for him. We are not clones. One set up does not work for every one. I like his casual attitude towards set up and component choice. If it works dont change it.

rocky-mtn-gman (Jan 7, 2018 at 16:37)
How tall is Keegan, how much does he weigh? Just suprised, because from previous articles he didnt look that big but he must be fuggin’ tall as Kelly McGarry was.

starpak (Jan 8, 2018 at 0:45)
How ridiculous it is to criticize a set up that works, apparently, well for a PRO - (not just criticize but to analyze as if we have all become experts in suspension set up). Over and out.

chillrider199 (Jan 7, 2018 at 10:48)
Because maybe some people ride different terrain, a different bike, a different style. Theres a lot of varriables.

mikelee (Jan 7, 2018 at 11:03)
It clearly says he rides his compression all the way in! Closed. Rebound pretty fast. So think you’ve misunderstood his set up.

thejake (Jan 7, 2018 at 11:43)
Makes sense to me, low inertia to open the shim stack but a lot of force pushing back against it to keep it from getting too deep in the travel.

justanotherusername (Jan 7, 2018 at 12:20)
That kind of setup would terrify me, I had a bad crash years ago due to being bucked over the bars on a big compression, ever since I run a fairly slow rebound - I love Vivid shocks for this as you can control beginning and end stroke rebound to keep fast small bump rebound but not feel like I am going to be shot over bars under heavy compression.

thejake (Jan 7, 2018 at 12:40)
@Racer951: you do know you can bucked from running your rebound too slow right? Suspension packs up and starts to buck you. That being said large dips can be odd

justanotherusername (Jan 7, 2018 at 12:48)
@thejake: Yea more than aware of that, its not the consecutive hit / packing issue I mean, more a deep compression like a smooth bike length hole or a jump with a short transition causing suspension to almost bottom out and then extend quickly.

mikelee (Jan 7, 2018 at 22:04)
@thejake: rebound force can’t be used to stop a fork or Shock from going into its travel! Fast rebound setting is exactly that. It’ll rebound faster or slower depending on how much you dial in. The spring is the only thing creating rebound force.

justanotherusername (Jan 8, 2018 at 2:44)
@mikelee: Thats correct and incorrect at the same time, increasing rebound damping wont prevent the shock from using its full travel on a single compression but if your rebound damping is too slow under repeat / consecutive hits the shock is not able to extend and therefore with every impact is pushed deeper into its stoke.

Its a common issue with people who run rebound too slow and then believe their shock has excessive compression damping.

mikelee (Jan 8, 2018 at 5:44)
@Racer951: I know what packing up is! That is not what I was referring to. The op said rebound could slow compression if its set fast,which is not the case. Each hit prior to the suspension packing up can’t be slowed by the rebound adjuster,that’s the compression adjusters job.

mikelee (Jan 8, 2018 at 13:33)
@ermoldaker: it’s not their setting I’m questionioning but the effect they think it has. Rebound set fast or slow has no impact on the actual compression stroke! If a Shock packs down that’s down to the rebound stroke.

justanotherusername (Jan 9, 2018 at 0:14)
@mikelee: have a re read of the few comments above - if rebound damping is too high the shock will be unable to extend at a sufficient speed before having to deal with the next impact, because of this the shock packs down which can often make the rider think compression damping is at fault when this is not the case.

Nobody is making the suggestion that you think they are.

vtracer (Jan 7, 2018 at 13:12)
Two questions: what is the blue thing electrical taped to his fork lower in the first pick? And 19 up front, 28 in the back, does anyone else have such a large spread between front and rear tire pressur.

Duderz7 (Jan 7, 2018 at 13:28)
With his taller stack height he's likely not putting as much weight on the front end as some do, the lower pressure would help to maintain traction perhaps.

ermoldaker (Jan 8, 2018 at 11:31)
@Duderz7: I found the Boxxer (having quite a shoddy damper) needed low tyre pressures to make up for the small bump compliance. He also looks to be quite a light rider and I guess doesn't mind the back moving around.

loopie (Jan 7, 2018 at 13:53)
Does "Wound all the way in" on compression damping mean fully damped??? Cuz if so...How to make forks feel like shit(for DH) in one step: Crank up the compression damping. No rule against liking the feel of shit....or setting up for one hit wonders of course

loopie (Jan 7, 2018 at 14:05)
I suppose I'm just looking out for Regular Joe Blow...we wouldn't run those settings...but no different than we wouldn't run Gwin's settings either....but my bad anyways, should wait for an answer before making the statement...If 'Wound all the way in' means fully undamped....lol

andrew9 (Jan 7, 2018 at 14:51)
Because it kinda points out that bling bikes are lame Keegan doesn't seem to need anything special, other than his ability

mtbakerpow (Jan 7, 2018 at 21:37)
The cockpit isn’t stock,plus with the win he also wins bike check,you’re welcome.
Post a Comment