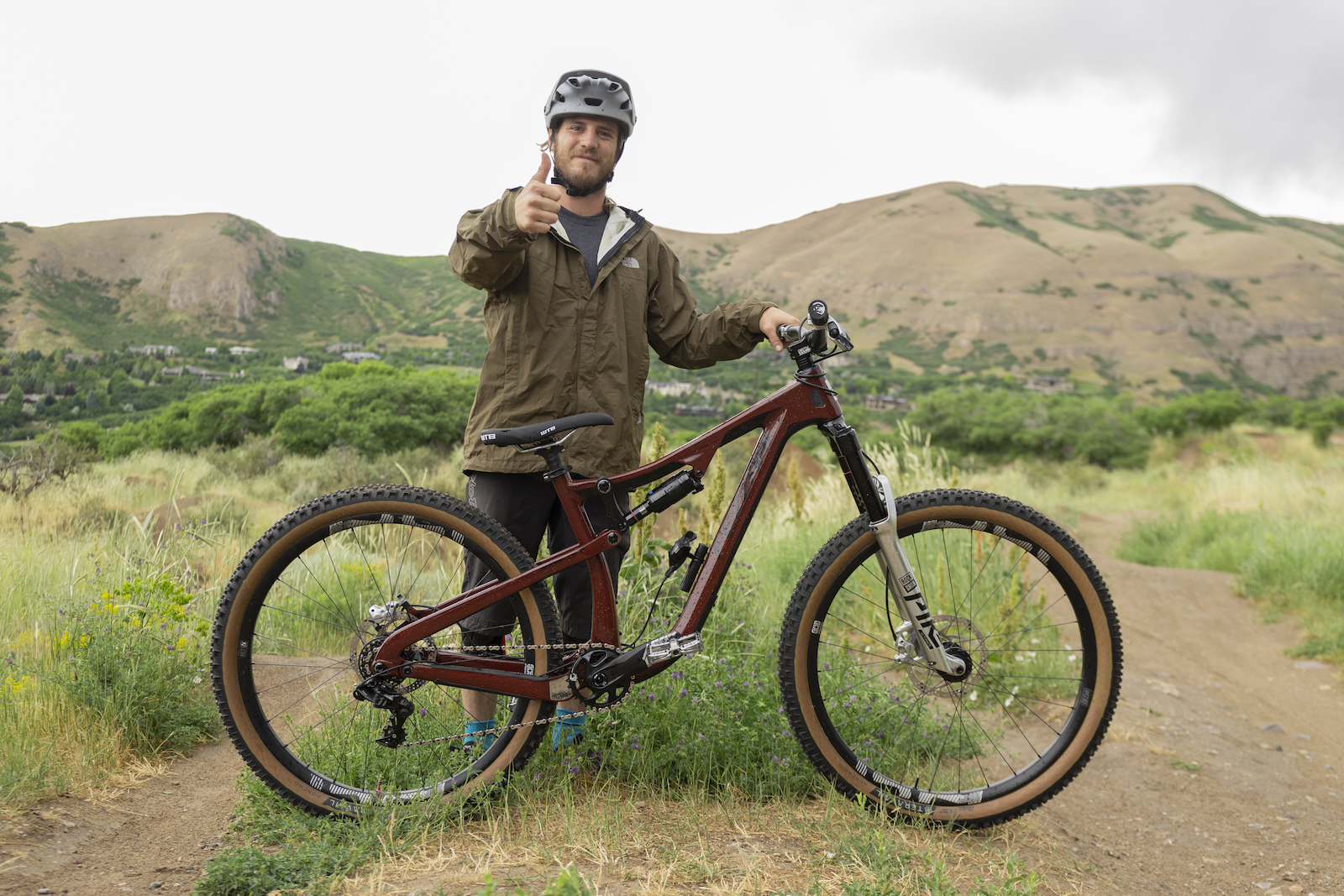 If your gaze spreads outside the mountain bike world, Kurtis Downs might be a name known to you. His exploits as a BMX rider, moto rider, X-Games Big Air medal winner and involvement with Nitro Circus show his incredible talent on anything with two wheels. He's also a factory rider for Fezzari, where he's been able to mix his BMX passion with mountain bikes for a potent and interesting cocktail that, like Taj Mihelich, make for a different perspective to bike setup and riding.

According to Fezzari, Kurtis is constantly out riding and pushing what he thinks is possible on a bike and his many world's firsts on his BMX attest to this.

This "Fun Country" / slopestyle project came about as a joint effort between Kurtis and Fezzari. He originally jumped on their Wire Peak E-bike and instantly had no issues with flips, 360s and other tricks. Moving over to their La Sal Peak enduro bike was an eye opener for how playful a lightweight suspension bike could be, and again, it presented no problems to Kurtis in tricking the bike with videos of him front flipping the 160mm travel 29er enduro bike off barely nothing.

Kurtis then took a Signal Peak and steepened the head angle to 68° to mimic the steering of his BMX bike and after a few months was smitten. But that constant itch to push the boundaries lead both Kurtis and Fezzari to begin chin scratching again.

Kurtis began chatting to Ian Mcdonnell, one of Fezzari's mechanics who grew up racing BMX in New York and whose penchant for slopestyle bikes and tinkering meant the two were a match made in heaven for realising what Kurtis was after.

The two put their heads together on how they could build an even lighter and nimbler jump bike. The Signal peak leant itself again as a canvas for the project due to its steep 68° head angle and short wheelbase. Fezzari had played around with a 140mm travel fork on the Signal before and liked the feel for trail riding. But Ian and Kurtis decided to also go with 27.5" wheels to up the nimbleness and make the bike easier to spin. They also dreamt up the custom down tube shifter after deciding that gears were the best way to go to manage the chain extension on the suspension bike while still maintaining a bit of a gear range.

After seeing the bike for the first time, Kurtis commented, "You guys have completely blown me away. This is exactly what I wanted and so much more." And the photos of Kurtis comfortably upside-down show that the two are getting along just fine. 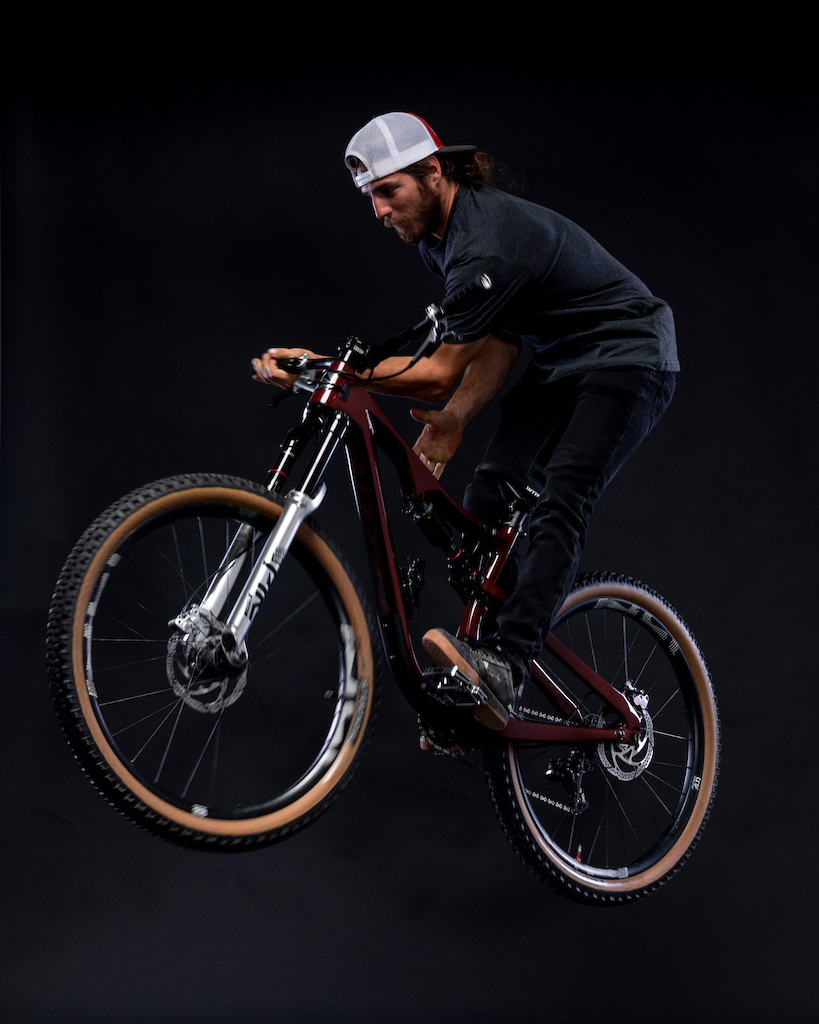 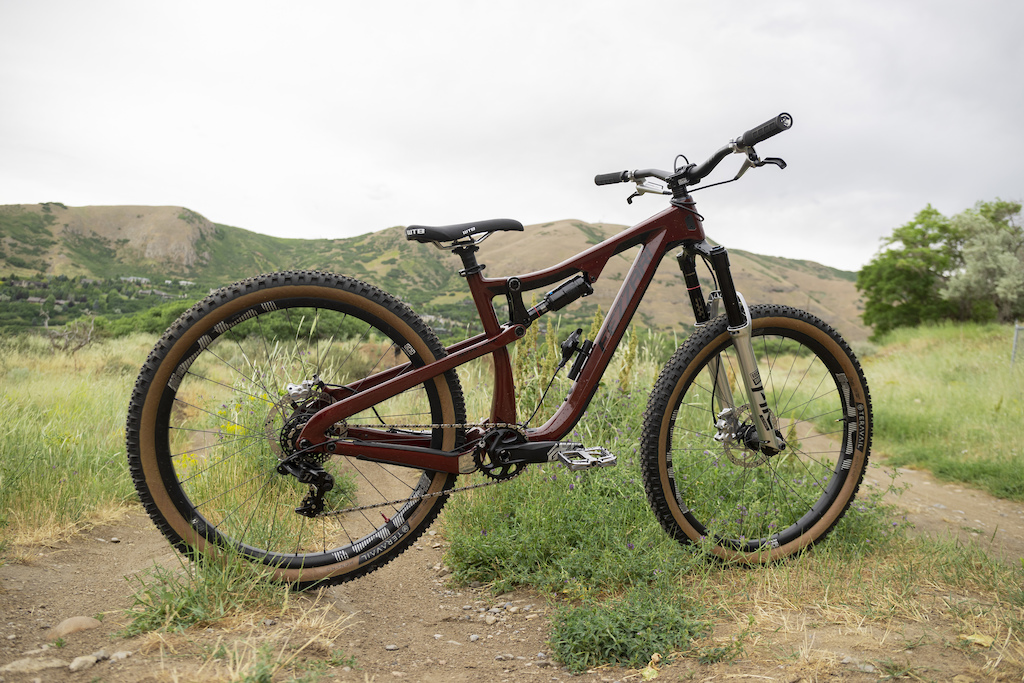 The bike started out with a standard Signal Peak frame, originally designed for 29" wheels. Out of the Fezzari range it's fitting the job in hand best, with a shorter wheelbase and steeper head angle, but Fezzari had some unique tweaks in mind.

Currently the bike still has 120mm rear wheel travel via the imperial length 190 x 51mm shock. Since there are a few metric options available for the same eye to eye, there is the opportunity to play around with the bike's travel. A 45mm stroke shock, for example, would cut the travel down to 112mm.

Fezzari were so into this project that they even delivered the full geometry of the custom bike compared to the stock Signal Peak that they started with.
The drivetrain is a 7 -speed SRAM DH GX drivetrain. The rear mech handles the chain stretch that the suspension has and gives Kurtis a bit of a gear range for riding the bike.

The spacing on the BB was changed to be able to adjust the preload on the bearings to add in a bit of friction to keep the cranks and pedals in the same place when Kurtis takes his feet off. The cranks are 165mm due to the BB height change going from 29" to 27.5" wheels. 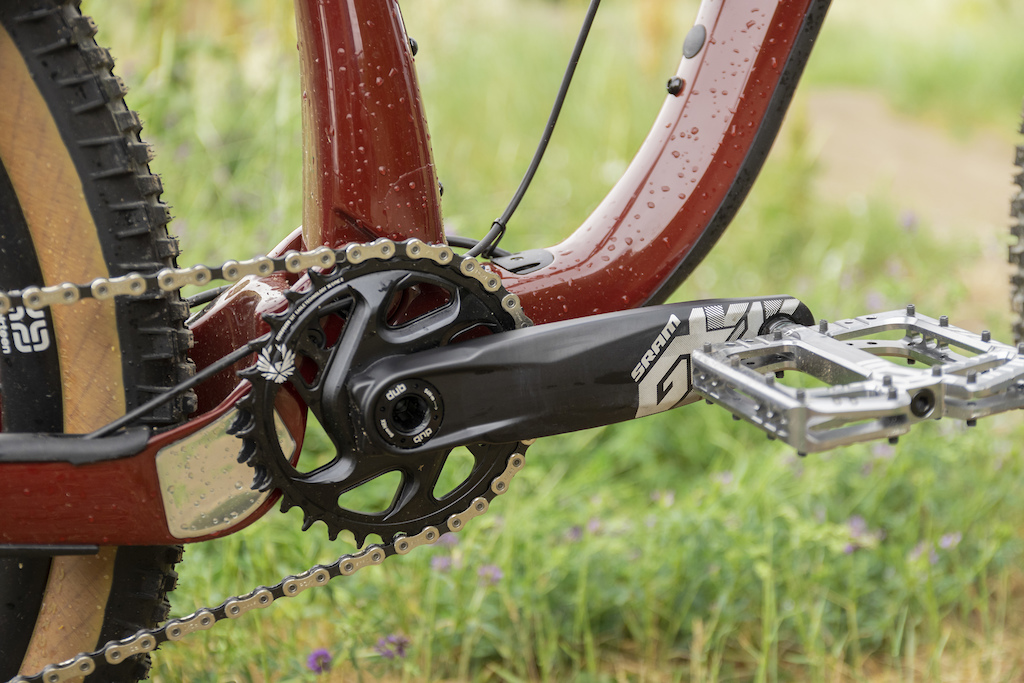 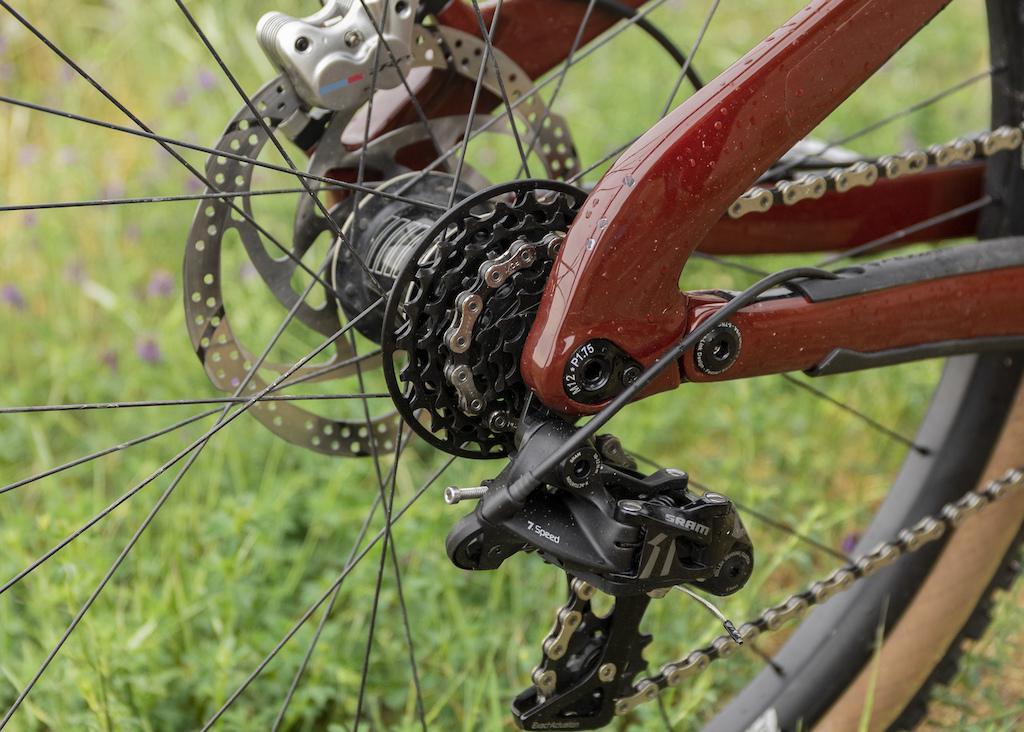 Out front a RockShox Pike Ultimate was upped to 140mm from the original 120mm that the full stock bike has and there's a Monarch RT3 rear shock. The fork is set up pretty damn firm, and more in line with a 210lbs rider. Rebound is set slower than what Kurtis usually has for trail riding, with the shock setup following suit in the stiff and slow manner. 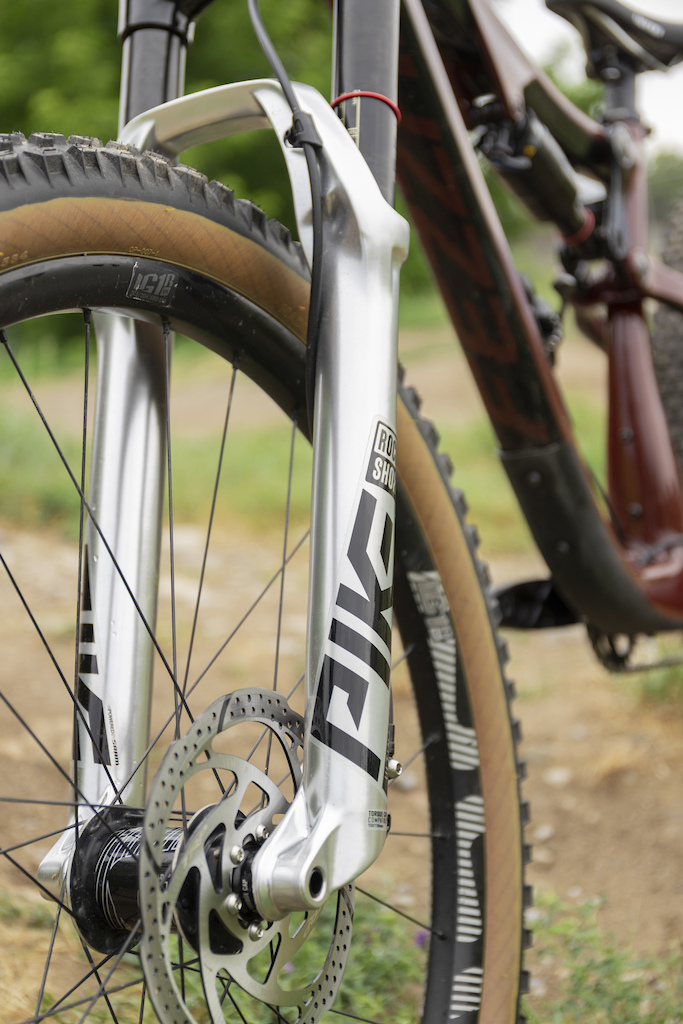 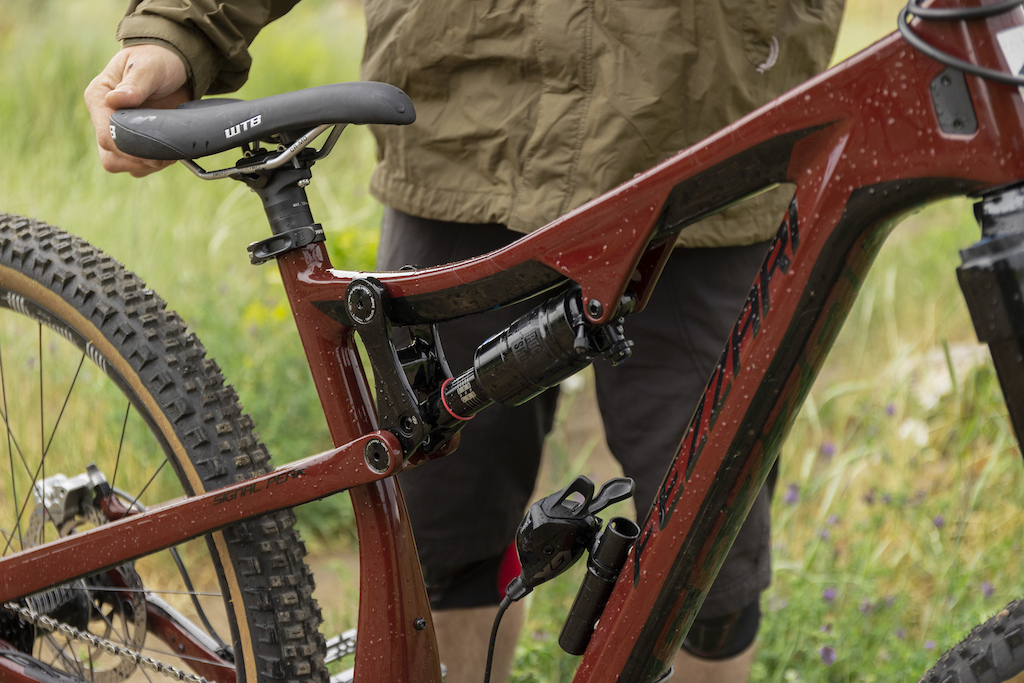 Deity Brendog Signature bars are cut down to 770mm from the original 800mm width and there's a 35mm long Deity Copperhead stem. Both are 31.8mm diameter. Grips are the Charger lock-on from Lizard Skins and pedals are Deity T-Mac. 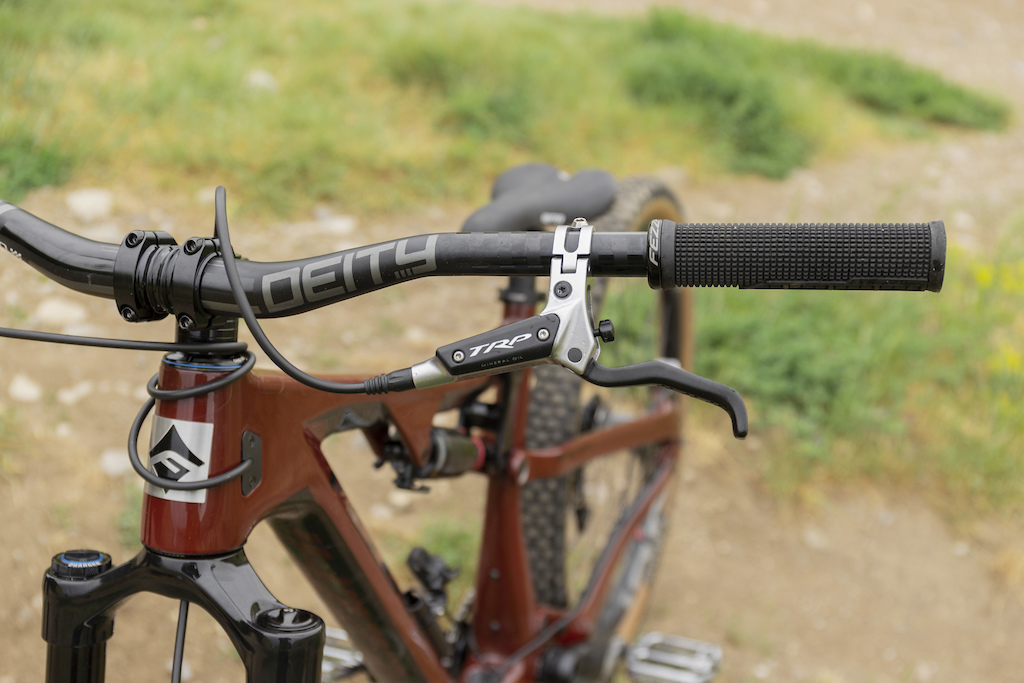 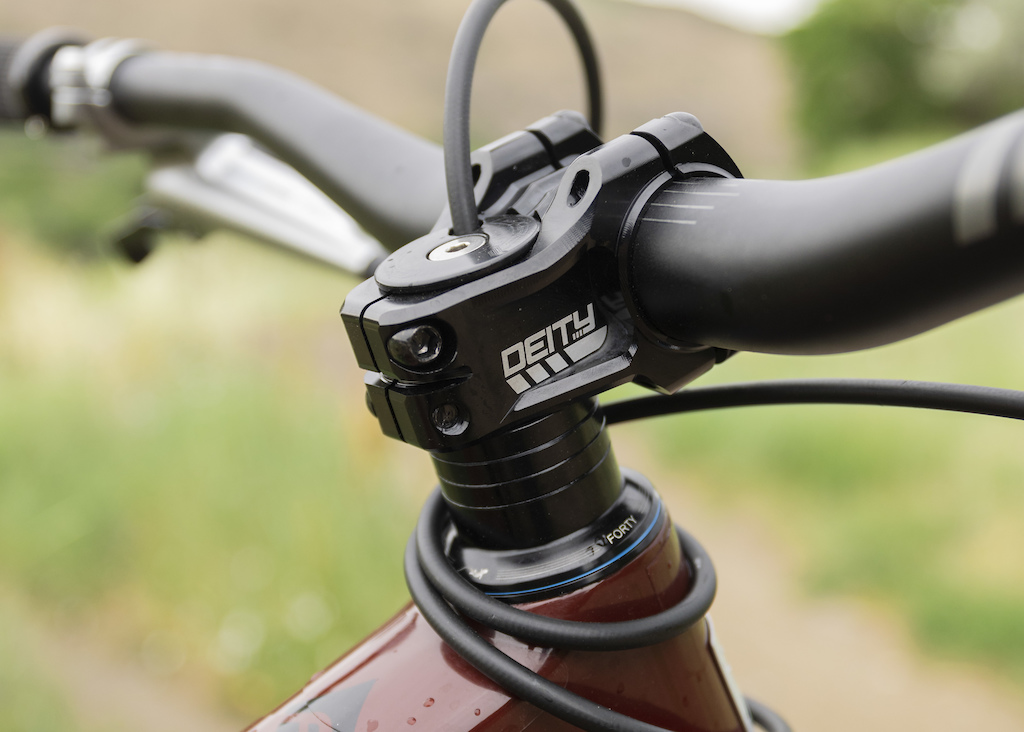 One of the most noticeable modifications is the relocated shifter, now residing on the down tube. The idea was to get it out of the way so it wouldn't get caught up in Kurtis' clothing during tuck no-handers, and to leave more real estate on the bars when he needs to find them again with his hands.

It was crafted from a short section of a handlebar with holes drilled to fit the water bottle rivet spacing. A bit of black paint to clean up the look and a standard SRAM shifter clamp was used to mount the shifter to the bar section. The shifter cable follows the normal routing and doesn't need any additional securing to keep it in place or stop it rattling.

Another neat feature, but one hidden away, is the road bike fork compression plug designed for internal cable routing. This contraption is used primarily to preload the headset with internally routed cables, but in this case means the front brake cable is easily routed through the steerer and can move freely as the fork compresses. A pretty clever use of off the shelf parts. 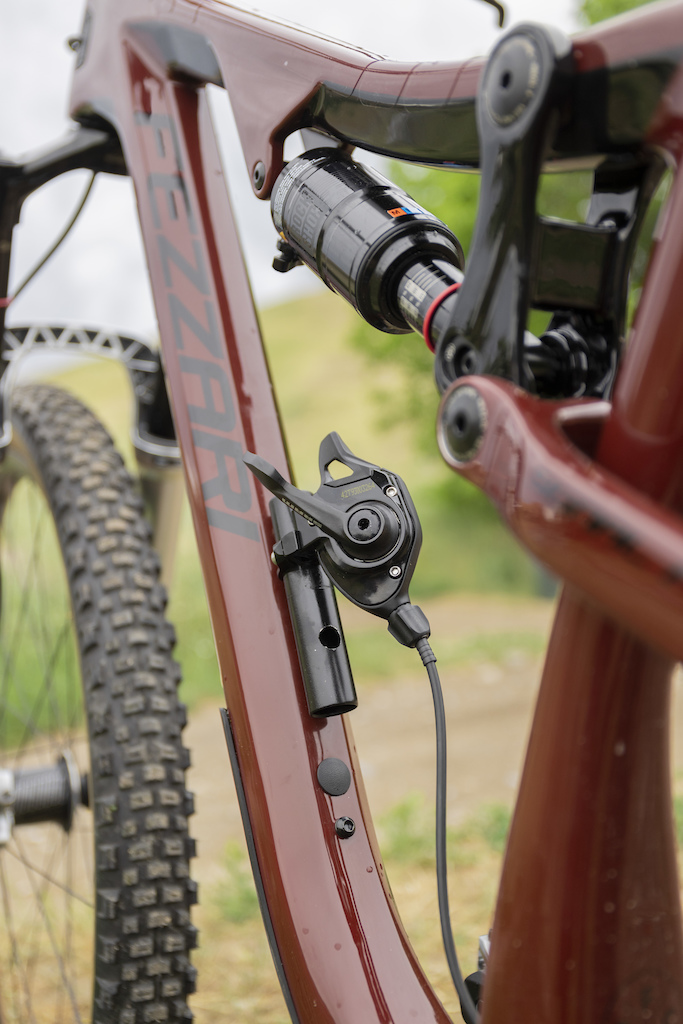 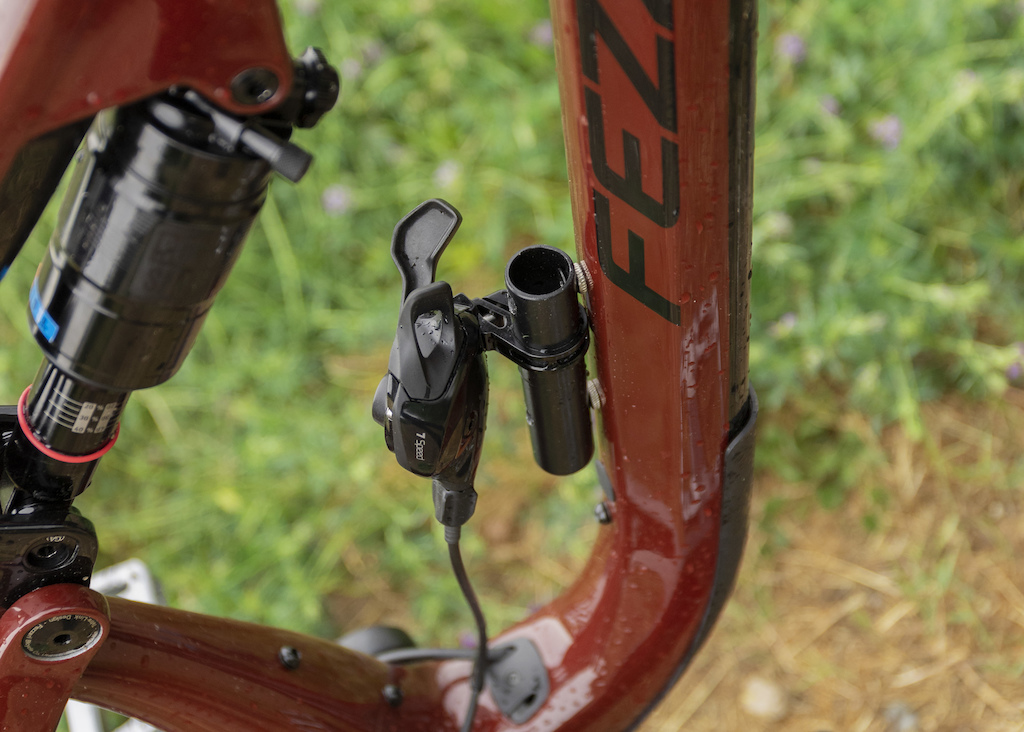 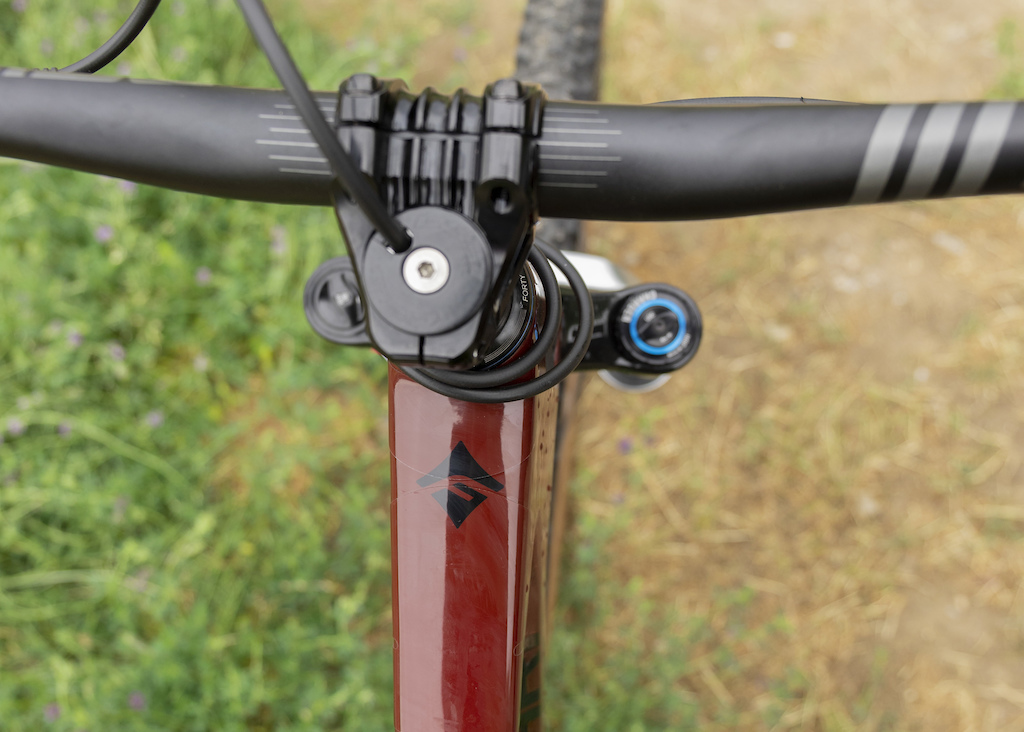 A Fezzari seat post is cut down to 200mm to get it as low as possible in the frame and there's a WTB Volt saddle.

The wheels were downsized to 27.5" for more maneuverability and are e*thirteen LG1R Enduro Race wheels. Teravail tires complete the wheels, and bike look, with a set of their tan wall 2.4" Honcho tyres setup tubeless and at 28psi front and rear. 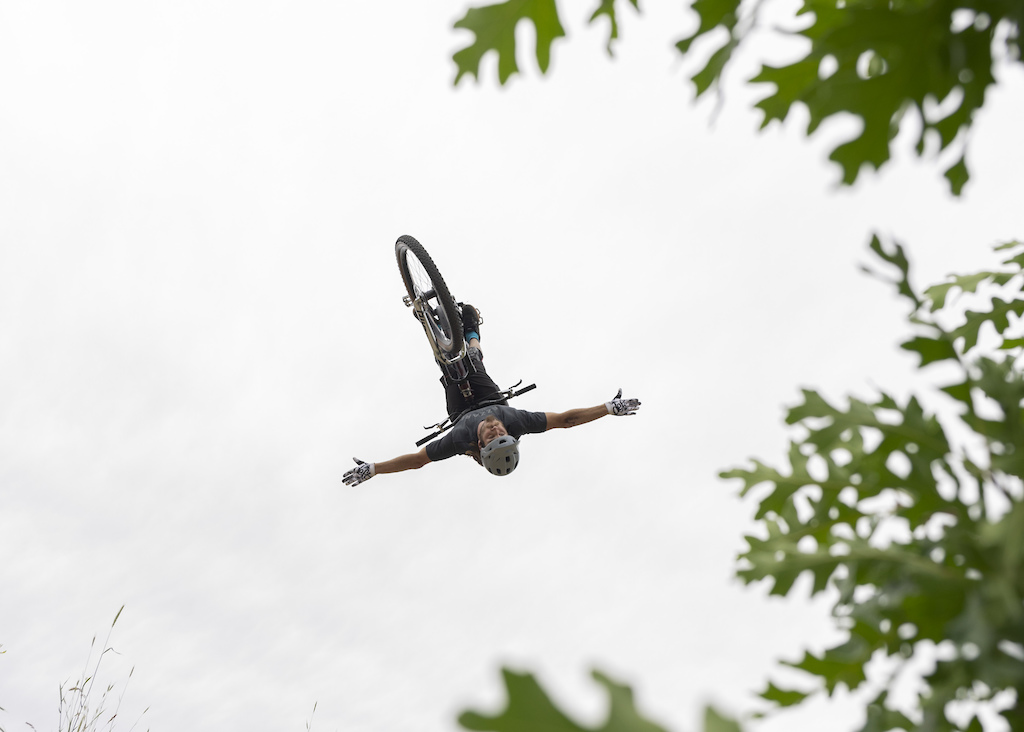 A big thank you to Fezzari, Tyler Cloward and Kurtis for all the information on the bike.

jorgeposada (Jun 15, 2020 at 19:01)
Mega headtube spacers seems like the thing lately. For non pro riders it is always an experiment. Lately I've been running low , maybe from my street background. Seems to handle steep high speed takeoff better for me at least. Let the chip shuffling continue. Of course height, style is individual. Just noticed alot of rigs jacked up in spacers with low bars.

SoDiezl350 (Jun 15, 2020 at 20:22)
@GoCougars: La Sal is a census-designated place in northeastern San Juan County, Utah, United States. The population was 339 at the 2000 census. The name comes from the La Sal Mountains which means in Spanish "The Salt".

PJSANAB (Jun 16, 2020 at 5:02)
The La Sal was one of my favorites during Outerbike. Surprisingly, better than any Evil which was what I thought I would like.

BiNARYBiKE (Jun 15, 2020 at 19:29)
Fun stuff. Fezzaris seem legit and I like what they’re doing. I know it’s silly but I don’t know if I could ever get past the brand name and ride a bike called Fezzari.

BiNARYBiKE (Jun 15, 2020 at 22:28)
@bull-dozer: I know. I said it was silly. But I care. I mean not to get all philosophical, but names are never “just a name,” right? If I’m going to drop that much money on a bike, might as well include a name and identity I’d be glad to wear on t-shirt or on a bumper sticker. But I’m vain like that.

BoneDog (Jun 16, 2020 at 8:20)
Fezzari bikes are complete shit. hands down never seen so many cracks throughout a frame in my life, and when we received the new swing arm it had to be installed using flat wrenches as wedges to align the rear pivots just to get the fucking thing together. Nothing like showing your customer his warranty frame with material removed for assembly..... They are a catalog bike with considerable inconsistencies between production batches and very poor QC. I would not recommend anyone to buy a Fezzari ever.

Ethanparker (Jun 16, 2020 at 13:30)
@BoneDog: I have a la sal so far Ive gone through 1 frame 3 rear triangles 3 of the carbon linkage pieces and at the moment its at fezzari have a new suspension link put in because they use garbage carbon. all in all the best bike ive ever road when its not broken but i also cant wait to sell it.

I’ll give him a week, maybe two, before he breaks it.

shaggyfreerider (Jun 15, 2020 at 16:17)
Hell yeah K-Dog. Representing East Idaho for sure. Dude has skills for days on all two wheels!